The Kununurra Transitional Housing is part of a national project that assists in the transitioning of Indigenous families from state-owned housing to home ownership.

The Kununurra transitional housing program forms part of a national pilot project to assist Indigenous families to transition from state-funded and owned buildings into home ownership. Having already designed and delivered forty-two state housing homes in the period of 2009–2011, for low-income and underprivileged citizens in the remote towns of Kununurra and Wyndham in Western Australia, Iredale Pedersen Hook Architects (IPH) looked to build on this experience and on our experience of other projects in remote locations.

The projects seek to create a series of new housing designs by exploring opportunities in the standard family housing brief of the Government of Western Australia Housing Authority. This brief was initially created to address social housing needs in metropolitan and south-west areas in WA and then modified to address northern WA climatic conditions.

Within the transitional housing program, Kununurra-based organizations Wunan and Community Housing Limited fulfil the vital role of assisting and mentoring occupants and managing the housing. Wunan represents Aboriginal people in the East Kimberley, initially interviewing individuals and families interested in the transitional housing home ownership program and then providing mentoring and support to successful applicants. To be eligible the applicants must be willing to work within the program parameters to make the transition into self-sufficiency and independence. This includes maintaining consistent and stable employment, ensuring that children consistently attend school, being willing to participate in the Wunan support program and committing to maintaining the tenancy agreement.

IPH conducted a series of post-occupancy evaluations (POEs) of stages 1 and 2 house designs in Wyndham and Kununurra, interviewing occupants, housing agencies responsible for the ongoing management and maintenance of the buildings and the builders and subcontractors involved in the construction. The knowledge gained from these interviews and studies was then invested in the transitional housing designs. This was combined with observations and photographic documentation of how occupants were engaging with, modifying, personalizing and at times challenging the houses.

Since 1999 we have worked with remote communities, designing housing and community buildings. Finn Pedersen’s RMIT University invitational master’s degree focused on the issues of delivery, technology and cultural, social and environmental appropriateness, taking a forensic and anthropological approach. Studies of occupancy forming part of the master’s research revealed a direct link between patterns of housing use and their precedent occupancy and cultivation of land using found material. What appears (to the unfamiliar eye) to be a chaotic collection of fences, boxes, fires, mattresses and other items is actually a carefully ordered, secured, raked and valued set of vital objects necessary for the ongoing safety and existence of the individual.

Past remote community projects generally involved a close and direct collaboration with the future occupants, allowing individual requests to be accommodated and resulting in a direct sense of identity and ownership. The future occupants of the Kununurra transitional housing project were unknown at the time of design and only allocated towards the end of construction.

The Housing Authority brief identifies the number of rooms, the size of rooms and what furniture is required to be accommodated in the houses. It identifies the mix of bedroom numbers across the estate and the number of houses to be allocated to each property, along with a selection of predetermined interior colour schedules and finishes. While this could potentially be restrictive, we embraced the quantifiable aspects of the brief and created a challenge to interrogate the flexibility of this document. The brief does not define spatial and cultural relationships or site relationships.

Given the quantity of housing already designed for Kununurra by IPH, the Housing Authority set a challenge to create “visual” diversity. This challenge was a perfect match to our practice, which embraces diversity found in individual briefs, places and circumstance. We extended the challenge to create a diversity of spatial types that are embedded with flexibility, allowing potential occupants to select a housing type and then personalize their use of the space. This desire evolved from the post-occupancy studies, which clearly demonstrated variety of use, ranging from spaces with maximal personalization via furniture and fittings to a minimum existence with carefully and strategically placed furniture. From these studies it was clear that flexibility encourages a sense of ownership, pride and dignity.

We allocated sites to all members of the studio, accompanied by a brief that identified appropriate cultural and social expectations, including:

- To enable good surveillance, both in the house and to exterior spaces.

- To provide scale variety of interior and exterior spaces to allow individuals to find a place to be alone or in a group.

- To engage with the street but still enable privacy when desired by the occupants.

- To provide oversized carports, including a fan and external power point to allow flexibility of use. Our POEs revealed a distinct desire for occupants to engage with their community. Cars are often parked elsewhere, with carports providing the primary external verandah space. The introduction of the fan and power point encourages this to occur.

- To design for increased natural ventilation, providing two windows to each bedroom (this has since been adopted by other architects).

This approach has led to occupants creating names for individual house types and actively conducting tours, comparing their houses with friends’ and neighbours’ houses, discussing and debating the merits of the designs and perhaps generating envy.

The desire for diversity is also captured by the five square metres of “feature paint” required under the housing brief. Each studio member proposed how this would be applied. The results were then studied during post-occupancy evaluations, revealing a mix of responses. Some occupants carefully placed family photos and sketches within the “feature paint,” Christmas decorations following tapering lines; some challenged the pattern by placing objects across them.

If we measure success by the number of awards (both architectural and agency awards), then this is a successful outcome. However, in a project of this type there are more useful measures of success than awards. One is the extent of transitioning to home ownership. With the first ownership in 2014 and many more following, this is clearly creating desirable and fundamental change. Another measure is the study of occupants’ interaction with the spaces, assessing the diversity of use, the personalization and clear pride and care, and the rich variety of spatial interpretation, ranging from minimal signs of occupancy to intense personalization and dense layering of precious items.

The final measure of success relates more to the transitional housing program that continues to unfold across the Kimberley. This pilot project has created a successful precedent, allowing others to follow with confidence. 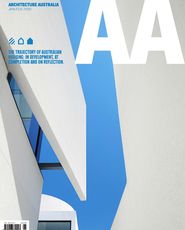 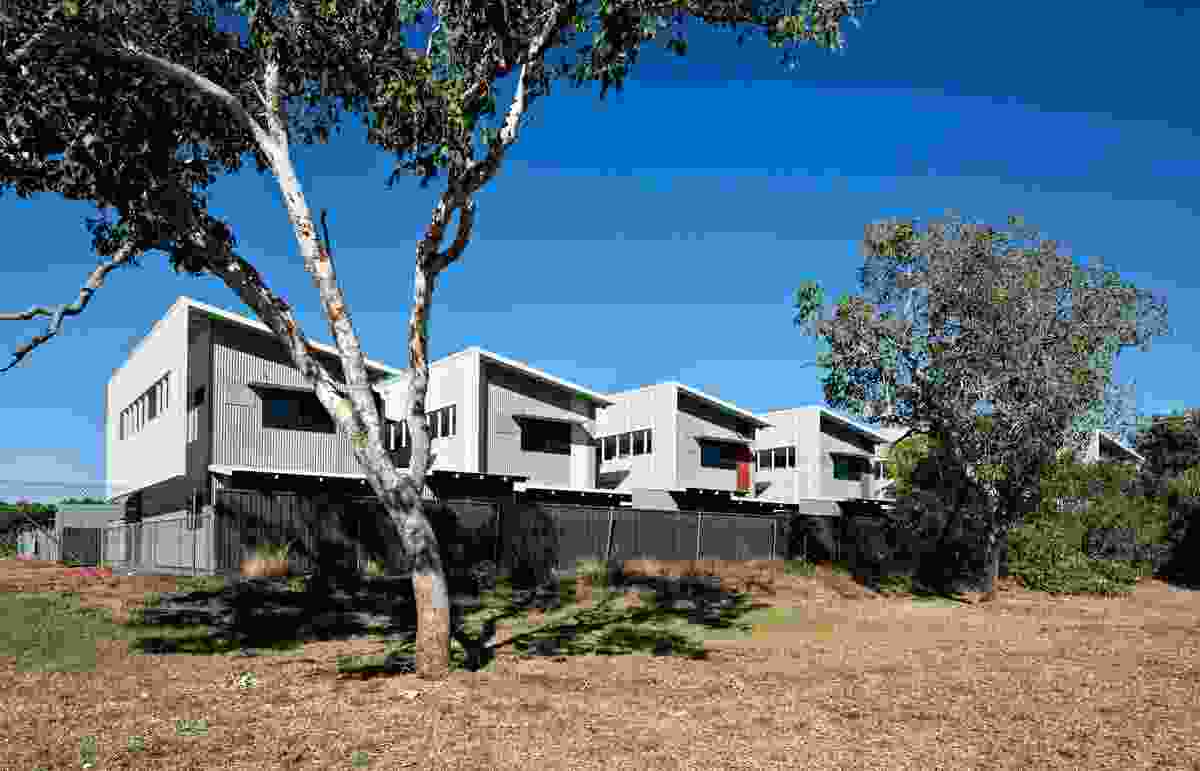 The Kununurra Transitional Housing is part of a national project that assists in the transitioning of Indigenous families from state-owned housing to home ownership. 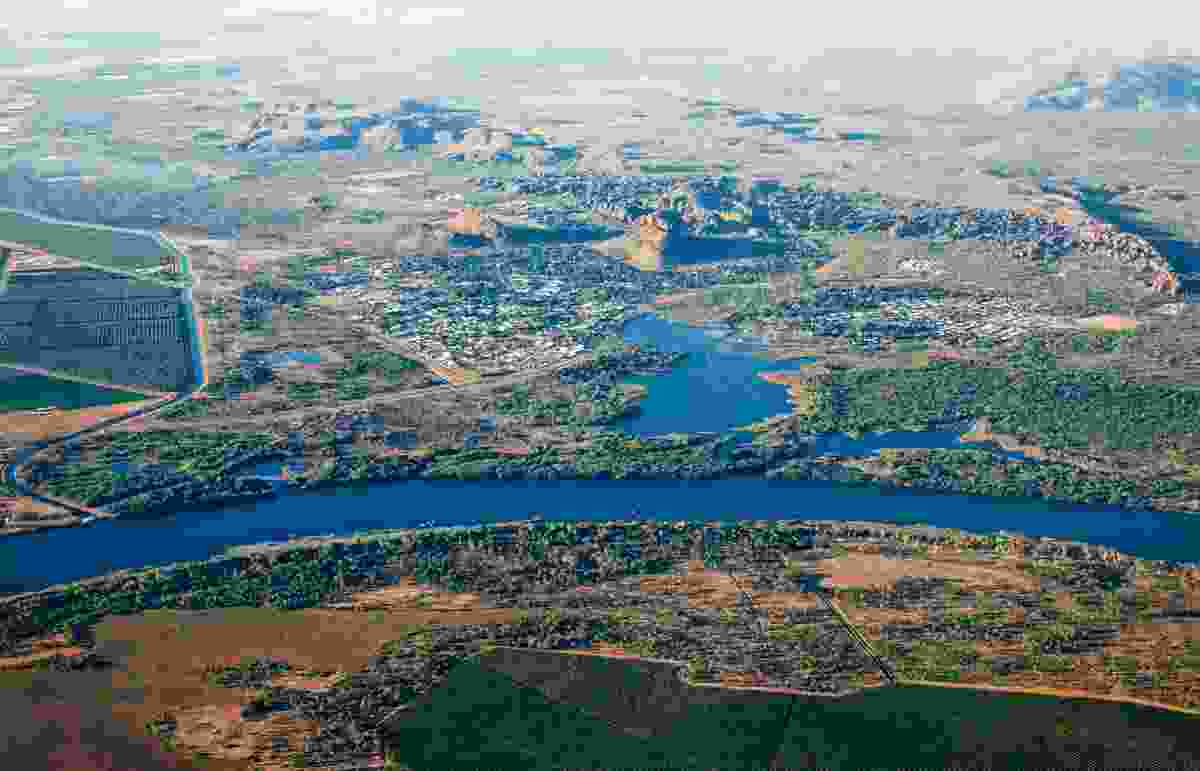 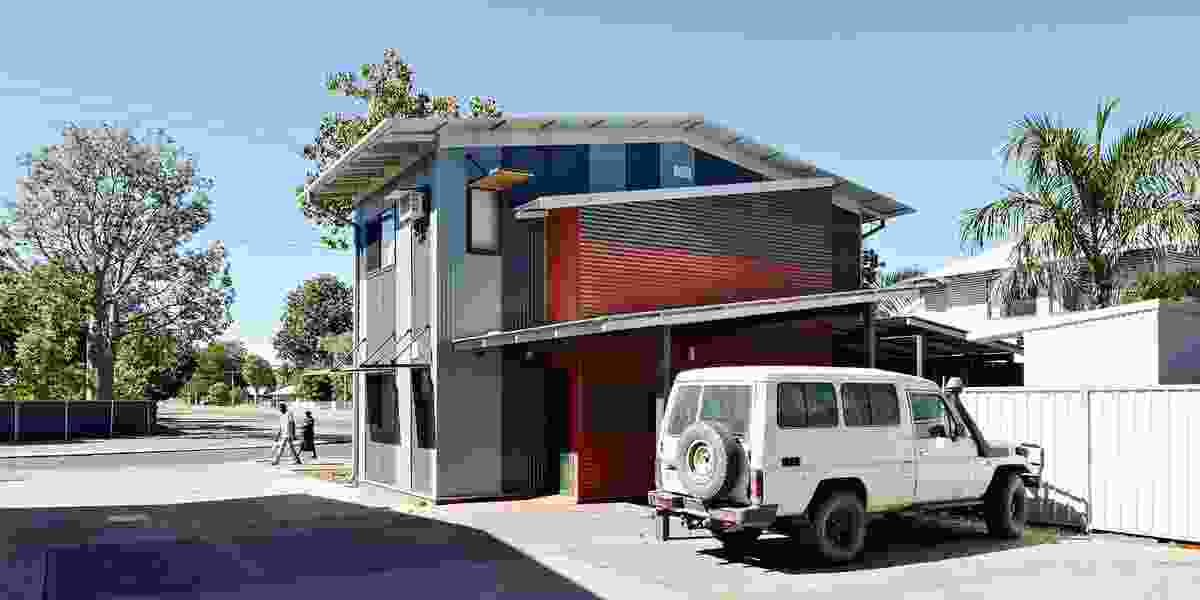 The houses were designed to engage with the street but still enable privacy when desired by the occupants. 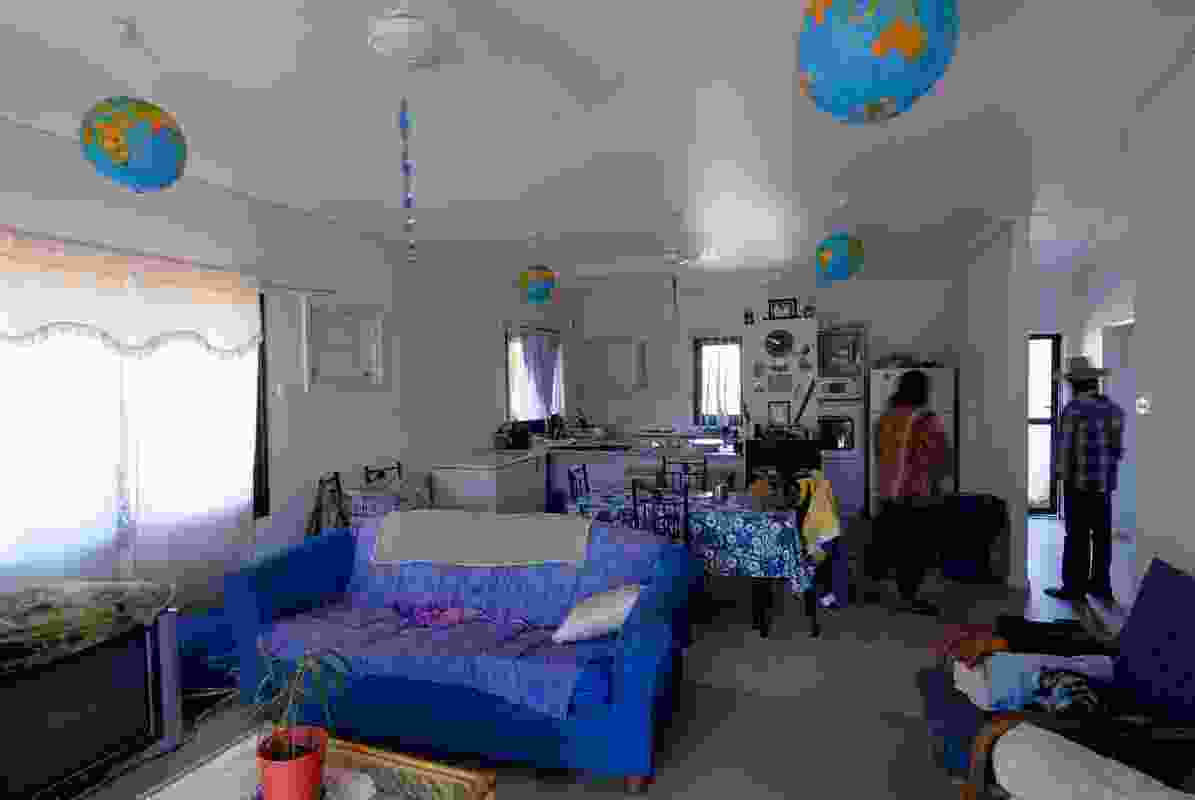 Post-occupancy evaluations carried out on the state housing previously designed by Iredale Pedersen Hook Architects in Wyndham and Kununurra demonstrated a wide variety of use and personalization of space, which helped inform the design of the transitional housing.

Set with the challenge of creating “visual diversity” across the large quantity of houses, Iredale Pedersen Hook Architects allocated sites to each member of the studio – resulting in a diverse range of housing types. 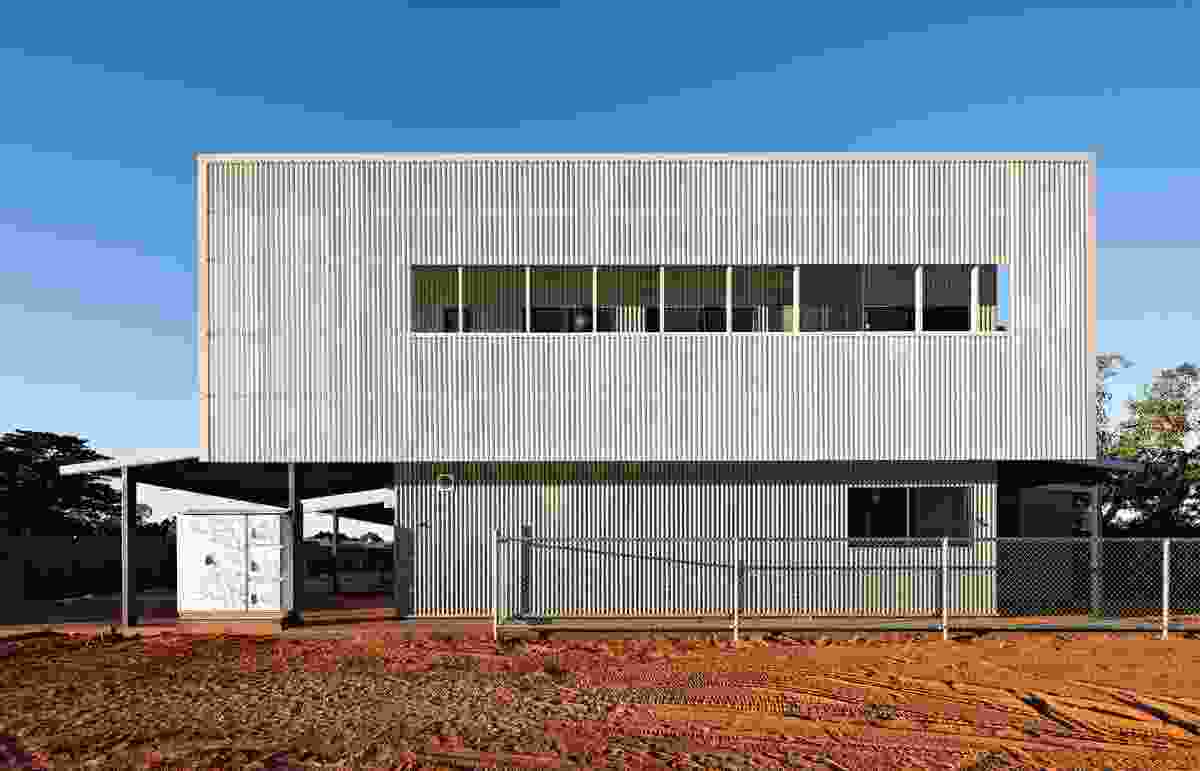 Set with the challenge of creating “visual diversity” across the large quantity of houses, Iredale Pedersen Hook Architects allocated sites to each member of the studio – resulting in a diverse range of housing types. 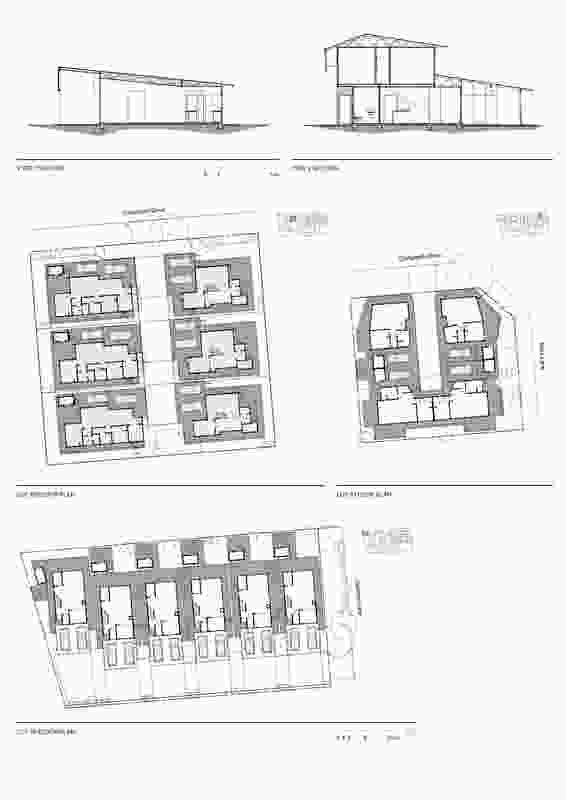