A request for increased amenity rather than more square metres was the impetus behind this deceptively compact addition to a period Hobart home by Preston Lane Architects, where shifts in level and volume help create light-filled spaces and a connection to the garden.

Aligned with a shift in floor level, a narrow skylight marks the point at which the addition and existing house adjoin. Artwork: Jai Vasicek.

The brief for this extension, located on the edge of Hobart’s city centre, was to bring in more light, connect the home to the garden and thereby make the communal spaces much more liveable. The owners of the conjoined early-twentieth-century terrace did not want a significantly bigger home, instead they wanted better amenity. Preston Lane Architects has answered the two-part brief in this extension with a range of new light sources for the home, an increased perception of space through the manipulation of volume and level changes to create an easy transition between inside and out.

The clients work in shift-based healthcare roles. As a result, they experience their house at all times of the day and night as they prepare for or relax after work. While many people would want to increase the amount of sunlight entering their home, perhaps shift work increases the desire for the warmth, prospect and variability that light can bring. While the existing house had considerable character, including an original stained-glass door, lights and timber stair, it was dark and a little pokey, with much of the precious northern wall space at the garden end of the home taken up by a laundry and bathroom. The clients appealed to Preston Lane to rethink the arrangement of the main living and service rooms, and to open it to the sun while maintaining privacy from a neighbour located across a narrow right of way.

Programmatically, the new work only adds on the floor area of one room. This new space merges with the end room of the existing house, opening up to form an open-plan, two-level space with a stepped transition between. The lounge room sits on the higher level, while the new dining and kitchen sit half a metre lower, closer to the natural ground line of the garden. The bathroom shares the end wall of the main bedroom and an ensuite has been added beside it. These wet spaces are small but efficient, with one borrowing light from the other. The laundry has been spliced into the wall joinery, which runs the full length of the southern party wall, becoming kitchen cupboards on the lower level. A large slider conceals a washer, dryer and cupboard space, which the clients love as it allows them to deal with this daily task while remaining part of the life of the house.

The unique qualities of this extension come through in the play with volume. A flat ceiling above the lounge area stretches into a deep vault above the dining room. The architects refer to this as a “snorkel,” bringing direct and bounced sunlight into this area of the home. With the floor dropping away and the ceiling rising up to this sky-lit feature, there is a perception that the living space is larger than its modest plan area. A large north-facing window and a glazed pivot door add to the wash of light in the room. Operable blades on part of the northern glazing allow the light in without forgoing privacy for the occupants. In addition, a slice of the flat lounge ceiling is a new skylight, which offers views to the clouds for those lying on the couch, while subtly indicating the line between the existing house and the new work.

Materials, colours and detail are stripped back and neutral, but each selection has a function beyond aesthetics. The duck-egg blue wall that wraps the bathrooms offers a subtle nod to the existing panelling of the home, with its vertical V-joint. Its curves and angles serve to define the entrance to this part of the house, work around existing features and offer an interesting surface for light to play across. The vertical detailing is continued in the kitchen, where custom pulls run the full height of the joinery doors. The timber floor of the existing house gives way to a burnished concrete slab at the lower level, in the area that receives the most light and warmth, thereby activating the thermal properties of this material. Solid timber joinery offers colour and warmth for open shelving where the occupants can place objects that reflect their aesthetic personality. Recycled bricks – the clients cleaned 2,500 of them for the project – have been used in a series of steps that transition from the back door into the garden.

The clients’ simple wish for more light has been the making of this extended house, with vaulting, detailing and material selection offering a series of surfaces that highlight changes in light throughout the day. The clients excitedly note that the new spaces have already accommodated a thirty-five-person Christmas lunch and crash testing from friends’ kids, but it is their delight in noticing the way that light bounces around the home and their newfound enjoyment of the garden that make the clients feel very much at home. 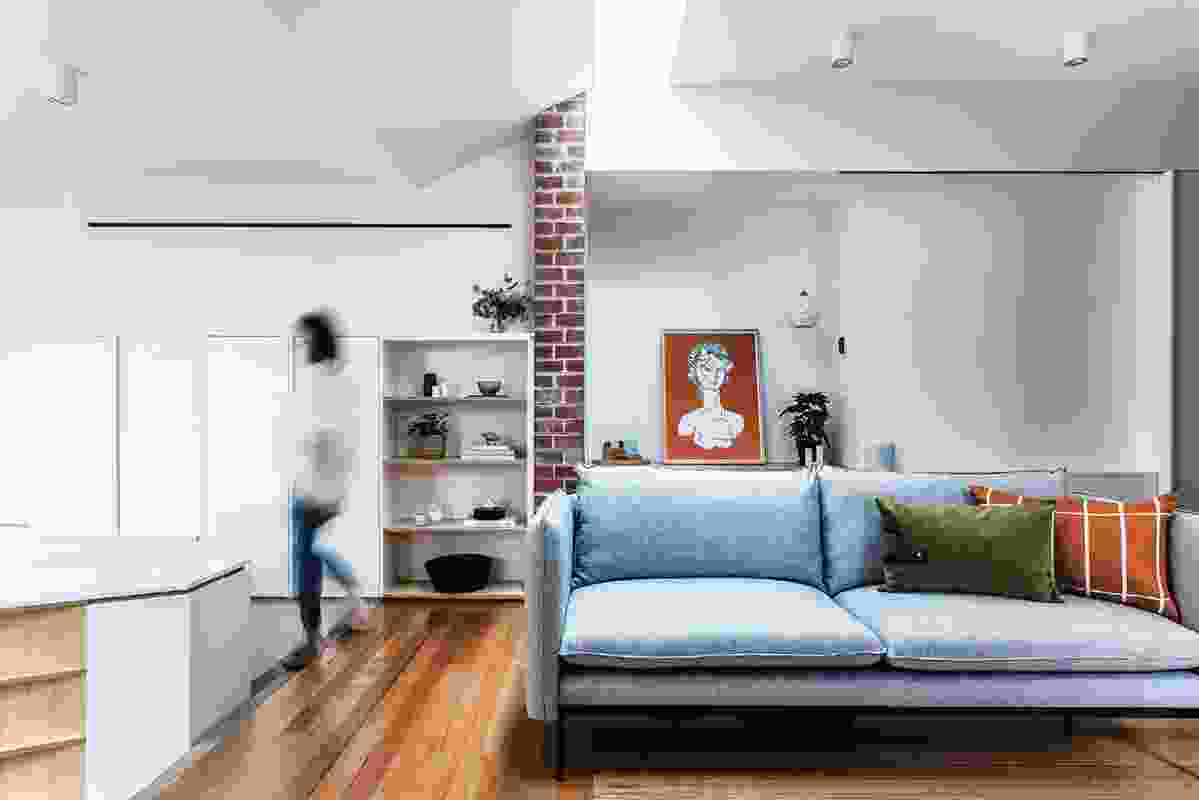 Aligned with a shift in floor level, a narrow skylight marks the point at which the addition and existing house adjoin. Artwork: Jai Vasicek. 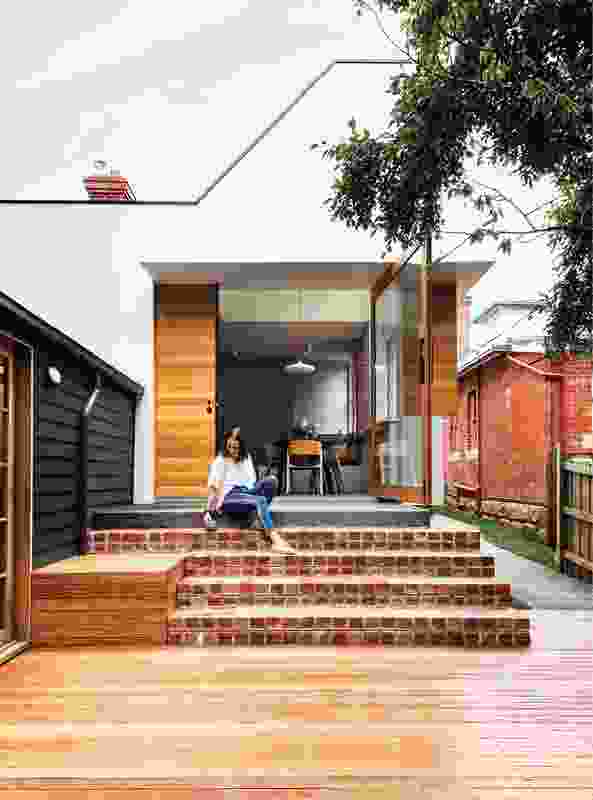 Echoing the character of the surrounding context, reclaimed brick stairs connect the home to the garden. 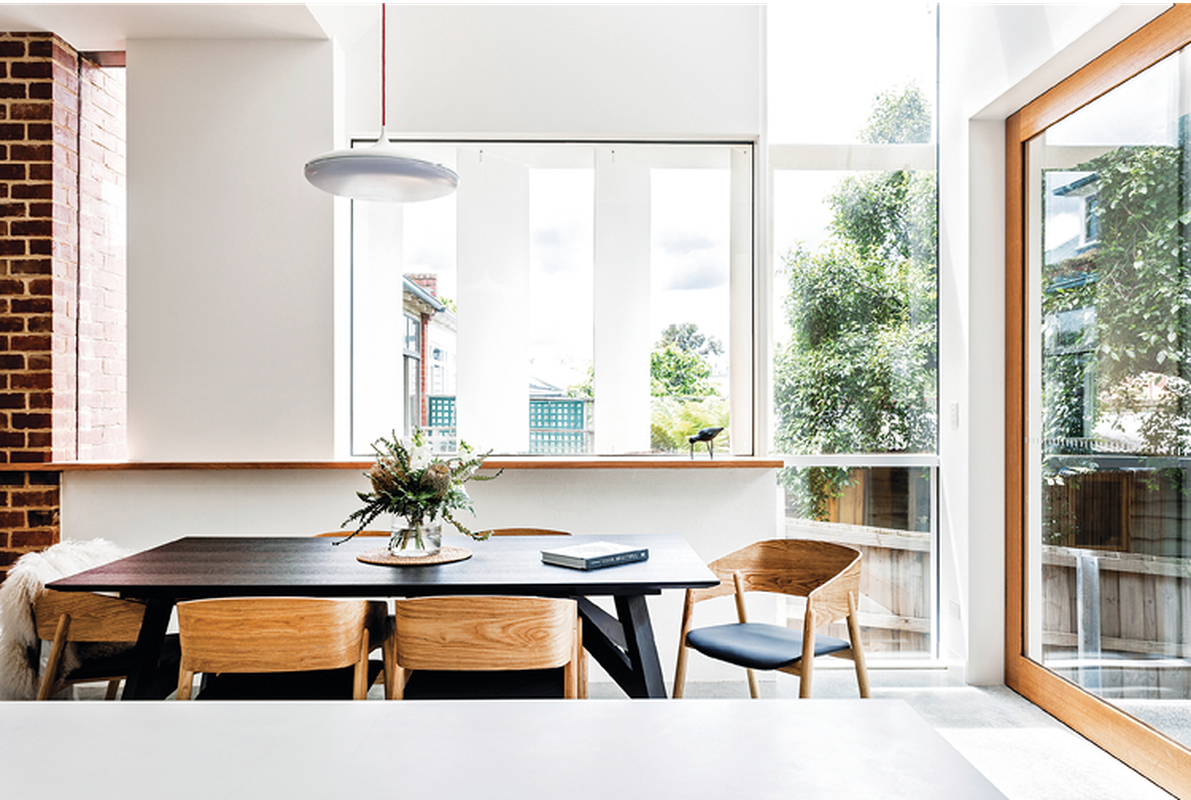 Operable blades allow sun from the north to penetrate the house while also providing privacy. 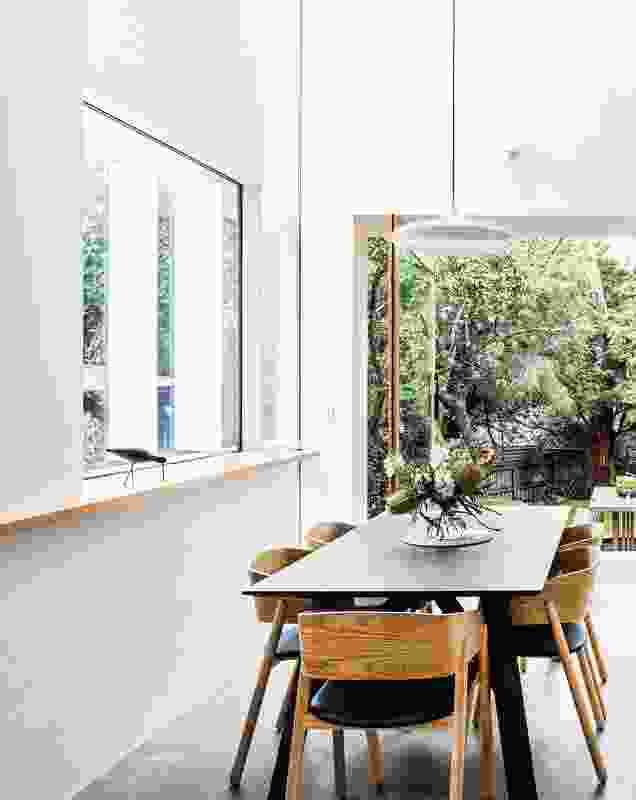 A glazed “snorkel,” formed from the steeply vaulted ceiling, floods the kitchen and dining space with sunlight.