This new infill house in Brisbane’s New Farm by O'Neill Architecture balances openness with privacy to create a clever and inviting inner-suburban sanctuary.

Views from the house are largely into the two courtyards and to the garden, with sightlines to neighbouring structures restricted. Artwork: Paul Gundry.

At the heart of Brisbane’s inner-city suburb of New Farm are some of its older streets, lined in most part by modest timber-and-tin worker’s cottages on small lots. Sited close to their neighbours, these houses benefit from many of the virtues of traditional Queenslanders and yet suffer from the loss of visual and acoustic privacy that such physical proximity entails. In the essay “A First Place: The Mapping of a World,” David Malouf observes that the openness of Brisbane houses fosters the “subtle habits of not seeing, not hearing.” Such discretion is increasingly likely to be overwhelmed as the remnant in-between spaces and former back gardens are subdivided and developed for new houses, or encroached upon as the existing houses are enlarged. Over time, new infill houses have increased in volume and bulk and lately, as the land has increased in value, properties have been aggregated to enable multiresidential developments to be constructed, which further intensifies the difficulties of achieving or maintaining amenity and privacy for those living close by.

As a longstanding New Farm resident, architect Justin O’Neill is well acquainted with the complexity of issues to be addressed when designing dwellings in an area experiencing rapid growth and change. The commission to design a house neighbouring his own, on a site hemmed in by seven other properties, has been answered with a skilfully crafted design that provides privacy and tranquillity in the midst of an increasingly crowded neighbourhood.

The Laneway House occupies a long, narrow site bordering a cul-de-sac that provides access to two other properties. Hardly visible on approach along the lane, the presence of the house is flagged by the stepped and gently folded planes of the upper wall. This white, sculpted blade is imperforate and yet provides a scale for the laneway while masking the extent and arrangement of the spaces within. Its inflection signals and shelters the principal entry below and a crevice divides the plane and positions the bathroom window above, offering a discreet view back down the laneway. The primary spaces of the house are at ground level and clad in plywood panelling that is given its own scale by the rhythm of the timber cover battens. Together these elements demarcate the space of the laneway and amplify the presence of what is for the most part a single-storey structure, while holding at bay the aural and visual intrusion of neighbouring houses and nearby multistorey developments.

The house is ensured a measure of visual privacy by being set above the level of the laneway on a low concrete plinth stepped to match the gradient of the site. Entry is signalled by the sheltering porch and leads to the juncture between a courtyard garden, the kitchen and the combined living and dining space – essentially, the active, social heart of the house. This decisive gesture brings a visitor directly to the naturally lit, north-facing private garden, which illuminates and enlarges the adjoining spaces of the house. The illusion that the house is framed by open space is given by the glimpsed views of a second court across the dining space and of the garden that closes the view along the hallway.

Essentially, the house stretches the length of its site, separating activities and enhancing internal privacy. The lowest level accommodates the carport and storage. The kitchen and living space on the entry level, with main bedroom and ensuite above, form a central pavilion. Two further bedrooms and the combined laundry and bathroom adjoin the garden space. Views are largely into the two courts and to the garden, with those to and from neighbouring structures restricted or screened out. An exception is the linear sliding window, providing a governing view from the kitchen to the laneway and entry steps. There is a sense of ease and natural progression to the whole of the spatial experience despite the constraints determined by the location of the adjacent properties. Light, views and natural ventilation are introduced and modulated to enhance privacy and openness to the benign subtropical climate.

The linearity of the linking hallway is punctuated by drawing a volume up through the two-storey central pavilion; spatial drama is introduced by animating the space with direct light from above. The stair, tucked to one side, leads to the more private first floor, commanding a singular, sweeping and completely unexpected view of the hills bounding the city to the south.

This is an adventurous yet unpretentious house. Its design and construction were governed by the need to respond creatively to a constrained budget. A simple yet refined palette of materials and the adoption of project home construction methods helped to meet the budget. There is no superfluity or undue embellishment, with the design focused on achieving the most advantageous outcomes from the constraints of site and setting. The occupation of the full extent of the site and the introduction of courtyards have helped to minimize overlooking while providing light and views to each space and so enriching the experience of the whole.

The outcome offers a model of how infill housing within the inner suburbs could be developed to create not just dignified and enjoyable places to live, but also inviting, sociable and well-scaled public linking spaces, such as the laneway. Further, the Laneway House offers fruitful lessons as to how these same suburbs could be developed and reinvigorated through the application of informed and purposeful design to ensure that privacy, liveability and public amenity can be provided and sustained. 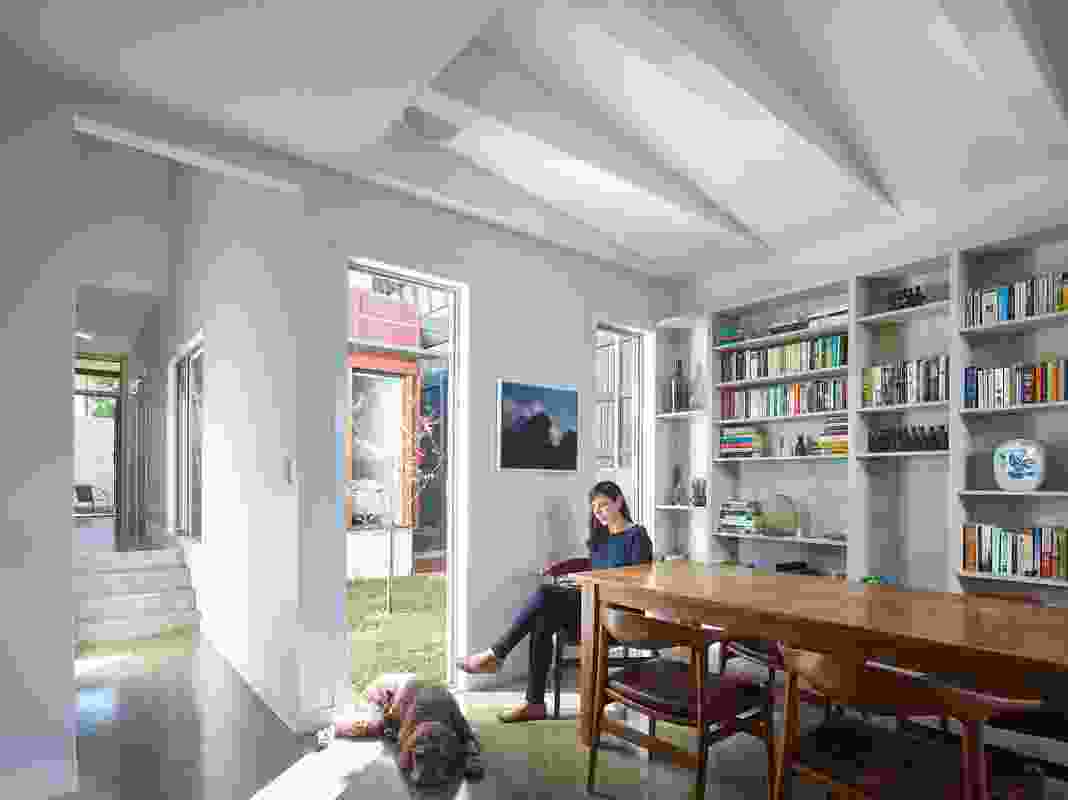 Views from the house are largely into the two courtyards and to the garden, with sightlines to neighbouring structures restricted. Artwork: Paul Gundry. 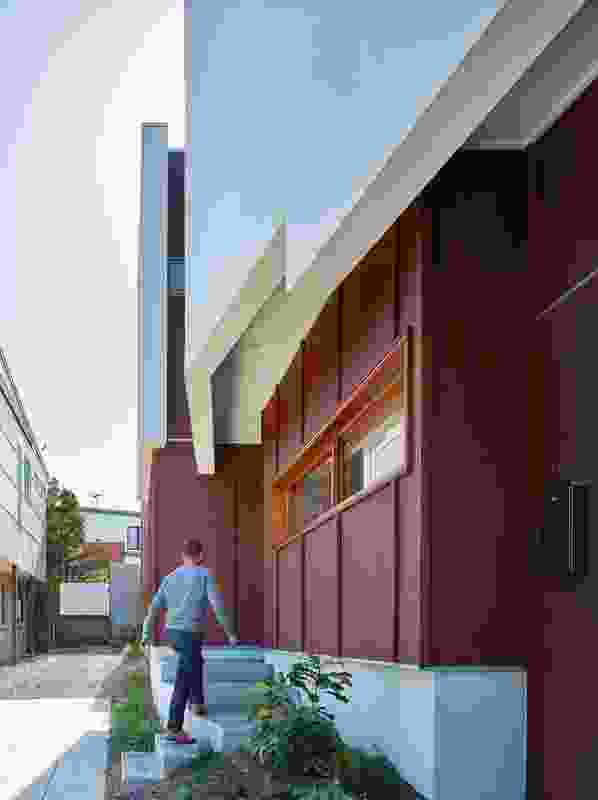 An inflection in the sculptured blade signals and shelters the principal entry to the house below. 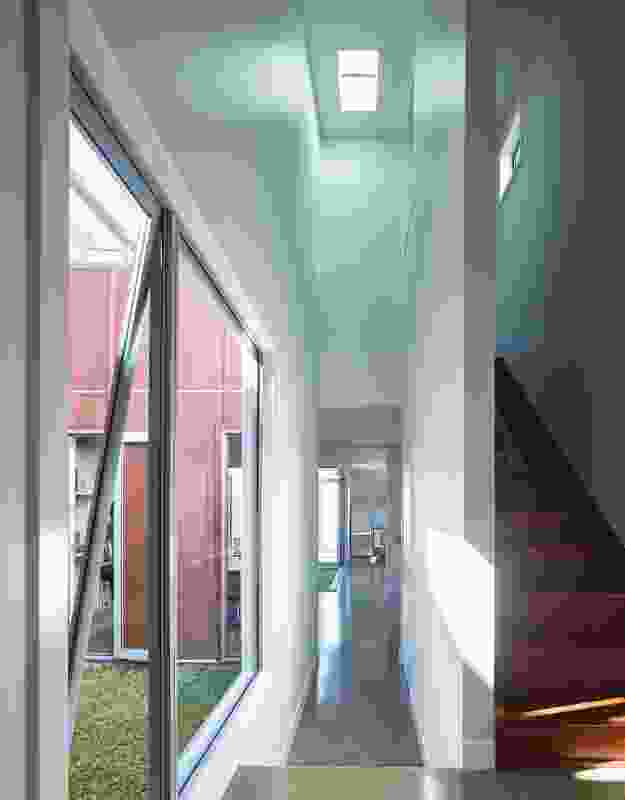 The linearity of the hallway is punctuated by drawing a volume up through the two-storey central pavilion. 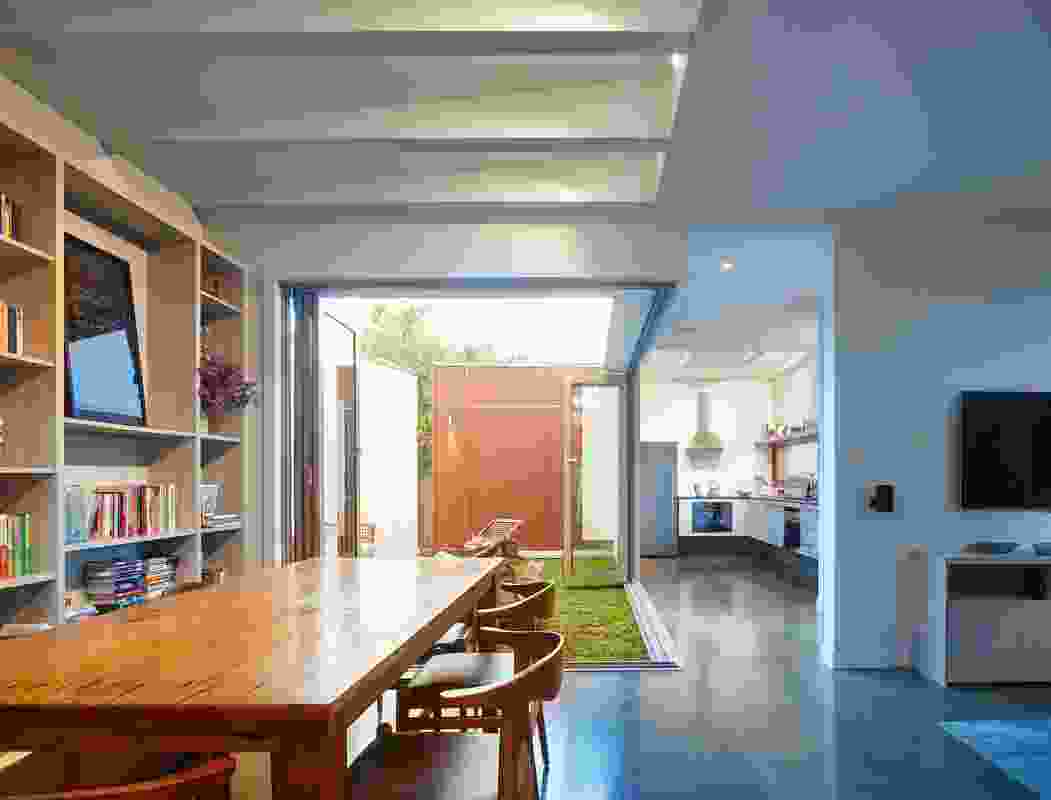 Open to the subtropical climate, the courtyards introduce light, views and natural ventilation and enhance privacy. 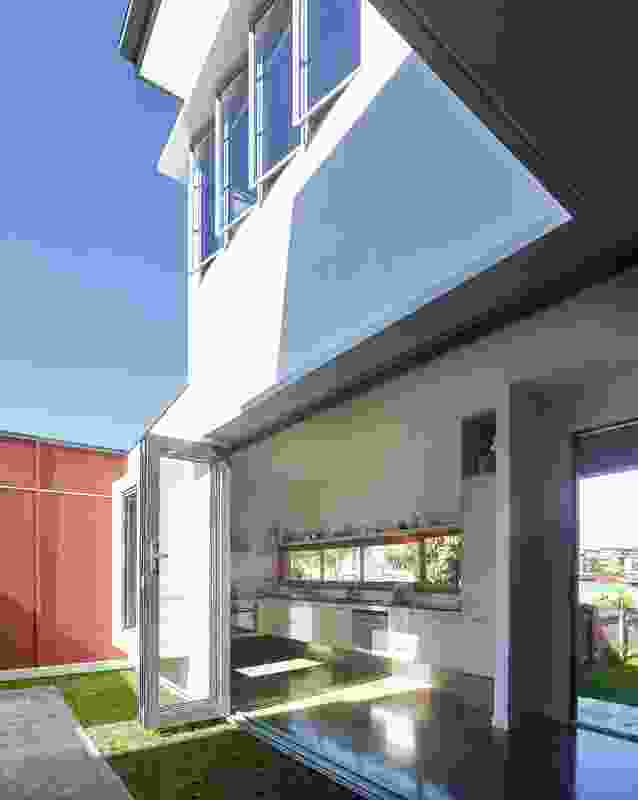 The main bedroom and ensuite have views into the main courtyard from windows above. 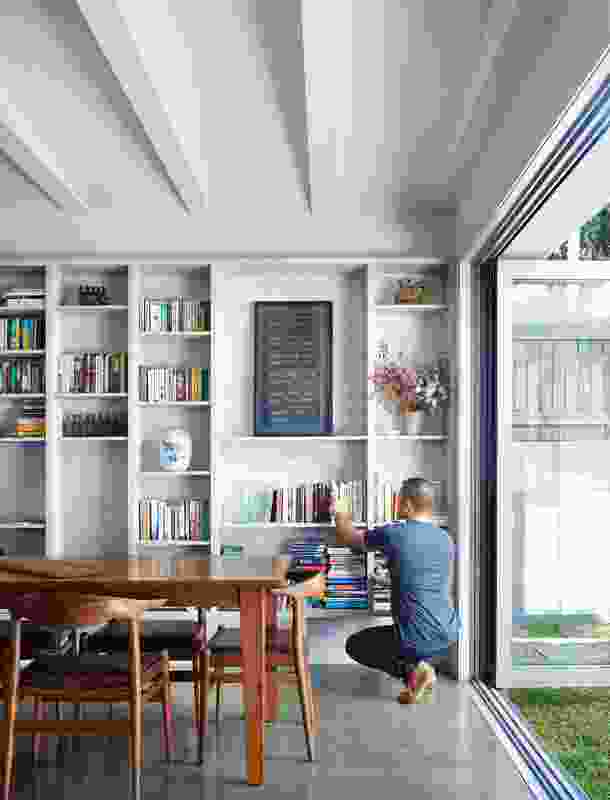 A simple yet refined palette of materials and the adoption of project home construction methods helped to meet the budget. 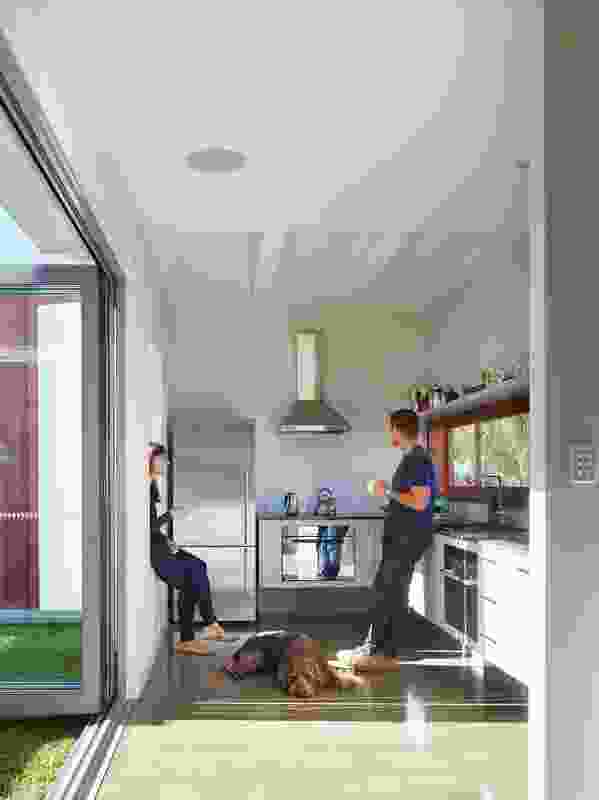 The kitchen wing features a narrow sliding window on the south-western wall, providing a view to the laneway and entry steps. 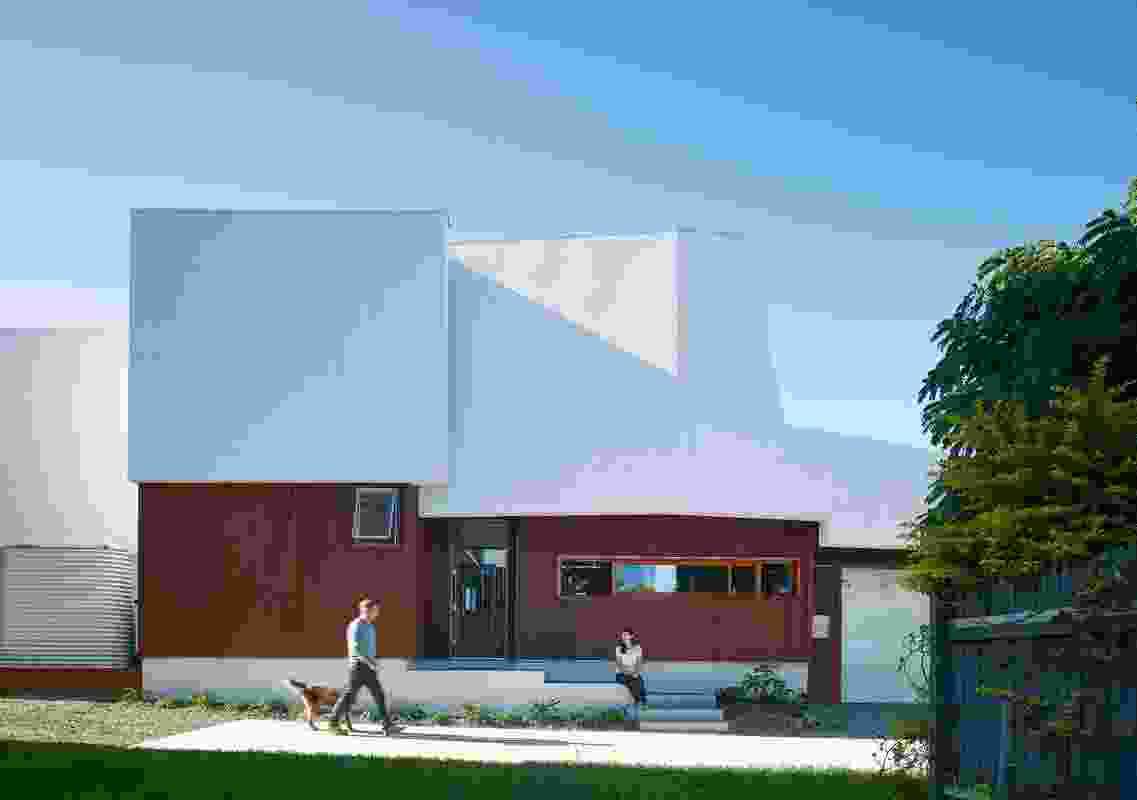 White, stepped and gently folding planes provide a scale for the laneway while masking the arrangement of the spaces within.