Leading Change was an event convened by Parlour in January 2018 to mark the extraordinary moment in which every architecture school in Victoria had a woman at the helm. Naomi Stead had recently stepped into Head of Department at Monash University, Julie Willis is Dean of the Melbourne School of Design at Melbourne Uni, Vivian Mitsogianni is Associate Dean of Architecture at RMIT, Ursula De Jong was, until recently, Head of School at the Architecture at Deakin University, and Jane Burry is Dean of Design at Swinburne where a new architecture program commenced in 2018. This tendency is a national one, with seemingly more women than ever taking up high level leadership roles across Australian architecture schools. As a trend, it extends beyond the university sector to the AIA, with Clare Cousins as the AIA National President and Helen Lochhead as National President-Elect. In the AIA state chapters, female presidents include: Amy Muir (Victoria), Yvette Breytenbach (Tasmania), Suzie Hunt (WA), and Jenny Culgan (NT). It’s difficult to imagine a time in Australian history when the proportion of women in leadership roles in architectural institutions could possibly have been exceeded.

What can we make of this? How and why does it matter? How might we work with this emerging situation to best leverage productive change for the discipline of architecture?

Over 20 years ago I turned up at the WA Chapter of the RAIA to pick up my registration log book, to be confronted by a wall covered with photos of past Presidents. All white men; all posed with a professional facial expression to set off their suit-and-tie-ensemble and greying coiffure. This was a wall that represented what an exemplary Architect looked like. I could see no sign of myself across that thick blanket of portraits. As I moved from my university education into a profession I had come to love so deeply, it was a heavy blow to be struck by such a strong visual message that architectural culture didn’t see me, or many of my peers, as the real deal.

It may seem surprising that I was so struck by this encounter – the marginalisation of women in the profession was, after all, extremely evident. But this is the power of normalisation: it makes us blind to the obvious, concealing all sorts of elephant-sized-actualities that fill the room with their invisibility.

“[I]n principle, we may strive for equality, but this goes awry if equality is mistaken for sameness.”

Leading Change was a chance to reflect on how and why attention to gender politics amidst the landscapes of disciplinary power might be of value at this particular time in history, and to look for elephants that might be left looming in the room. Chaired by Justine Clark, there were four other women leaders on stage: Stead, Willis, Mitsogianni and de Jong. The presentations and discussion revealed considerable variation between leadership styles, whether implicitly evident or explicitly stated. These differences should not be surprising – but the degree to which it was impossible to reduce the group into a romanticised, generalised idea about the nature of female leadership is worth celebrating. The “image of authority” was discussed at some length. How does one (behaviourally and literally) “wear” authority (if not in a suit jacket)? Judging by all the women on that stage: both very convincingly and very differently. Compared to the relative homogeneity of those portraits of mature, white men, the panel sketched a varied picture of how one wears authority. The degree to which this gender shift in leadership opens up what “image” demonstrably counts as an exemplary architect is one of the more interesting and affirmative features of this architectural evolution.

As noted at the event, this does not mean that all is well in Australian architecture. Apart from many remaining instances of gender inequity, let’s also recognise that most of the women currently occupying leadership positions are white, “Western” and, representationally, the “daughters” of that wall of white male faces. When might we see, for instance, the first indigenous person leading an architecture school or the AIA? This is an important question – as the nation starts to acknowledge and address the historical silencing of indigenous histories and perspectives. And, how might architectural culture be enriched if other marginalised perspectives where offered more seats at the tables of leadership? As Naomi Stead eloquently pointed at the event, affirmative action becomes an important way to cultivate difference, rather than a way to treat everyone “equally.” This is a very important point in avoiding the (always looming) dangers of identity politics: in principle, we may strive for equality, but this goes awry if equality is mistaken for sameness. We are not all the same, just as we do not all occupy the same relationship to dominant powers. And therein lies the democratic imperative for attending to diversity.

“As the faces of women start to fill the walls of leadership portraiture, can this help us better explore unorthodox ways of making a difference, in order to open up deeper questions concerning alternative practices, irrespective of gender?”

However, in pointing out the significance of difference, we have to be careful not to let things rest just with questions of cultural or gender identity, because normalisation is ingrained at levels much deeper than identity categories. If we want to really bring out the elephants, it takes looking to collective and individual behaviour. Some years ago, I heard an account of a research project that involved visiting about 500 Australian schools. The researcher being interviewed claimed that after a while, they could tell what the school Principle would be like by the way the children greeted them at the front gate. This story clearly illustrates that the way leaders relate to others, how they convey their enthusiasm or otherwise for particular concerns, etc., becomes embodied by those who are answerable to that leadership. While the “job” of a leader is to make decisions, shape directives, build cultures, embed priorities, etc., none of these acts can be separated from the way in which they are actioned. Most of the time, and herein lies the danger, this embodiment-in-practice is not conscious and becomes collectively endorsed. This brings me back to gender: Women will often at least partially absorb and squeeze themselves into normalised, patriarchal behaviours, despite the fact that we might (unconsciously) undermine ourselves as we do this. Hence the importance of recognising what hides within normalised ways of doing, and of actively attending to potential alternatives.

Isabele Stengers offers a powerful, related argument in an essay about geneticist Barbara McClintock, where she explored what to make of the relationship between the fact that McClintock was a woman, a Nobel-prize-winning scientist, and considered “an incomprehensible nut case by most of her colleagues.” [1] McClintock’s idiosyncratic way of approaching scientific research was integral to her significant discoveries – but is her gender relevant? Stengers’ essay resists romantic generalisations around, for instance, ideas that women may be more ‘empathetic’ than men, admitting that women are just as capable of destructive or biased behaviour. However, she points to how women might be more likely to approach things differently, or in ways that may not be recognisable, given their long history of being rendered invisible in any case. Stengers writes: “Perhaps this is the real lesson of her life… not the discovery of an ‘other’ reason, but the exploration of what reason is capable of when it is liberated from the disciplinary models that normalise it.” [2]

Stengers’ argument can help us get closer to the opportunities within this unprecedented gender situation, that architectural culture as a whole would be unwise to let pass by. What might architecture be capable of when it is liberated from the disciplinary models that normalise it?Offering attention to the marginalised, or to that which has been rendered invisible, is not just a matter of fairness, it very likely offers us access to ways of doing things differently. As the faces of women start to fill the walls of leadership portraiture, can this help us better explore unorthodox ways of making a difference, in order to open up deeper questions concerning alternative practices, irrespective of gender. Given that it has never seemed more urgent that we do find other ways of doing (many) things, this attention seems critical.

As it turns out, this work is underway. At the heart of the 2018 exhibition/event series, Workaround, staged at RMIT’s Design Hub Gallery, was a pressing question concerning what alternative practices – not yet well understood, recognised or invented – might leverage affirmative, effective change. Curated by Fleur Watson, Kate Rhodes and Naomi Stead, this show gave voice to women in architecture whose practices where not altogether ‘recognisable’ in the normalised image of “Architect.” Faced with some kind of intractable situation or problem, these practitioners found a “workaround.” The range of differences across the 15 practitioners was in itself breath-taking, and the potential inside these alternative practices bodes well for the future of Australian architecture. It also demonstrated how much more work there is to be done at cultivating and generating alternative architectural practices, even if we risk derision in doing so.

Leading Change was a panel discussion presented by Parlour on 23 January 2018 as part of the National Gallery of Victoria’s NGV Triennial Extra program. 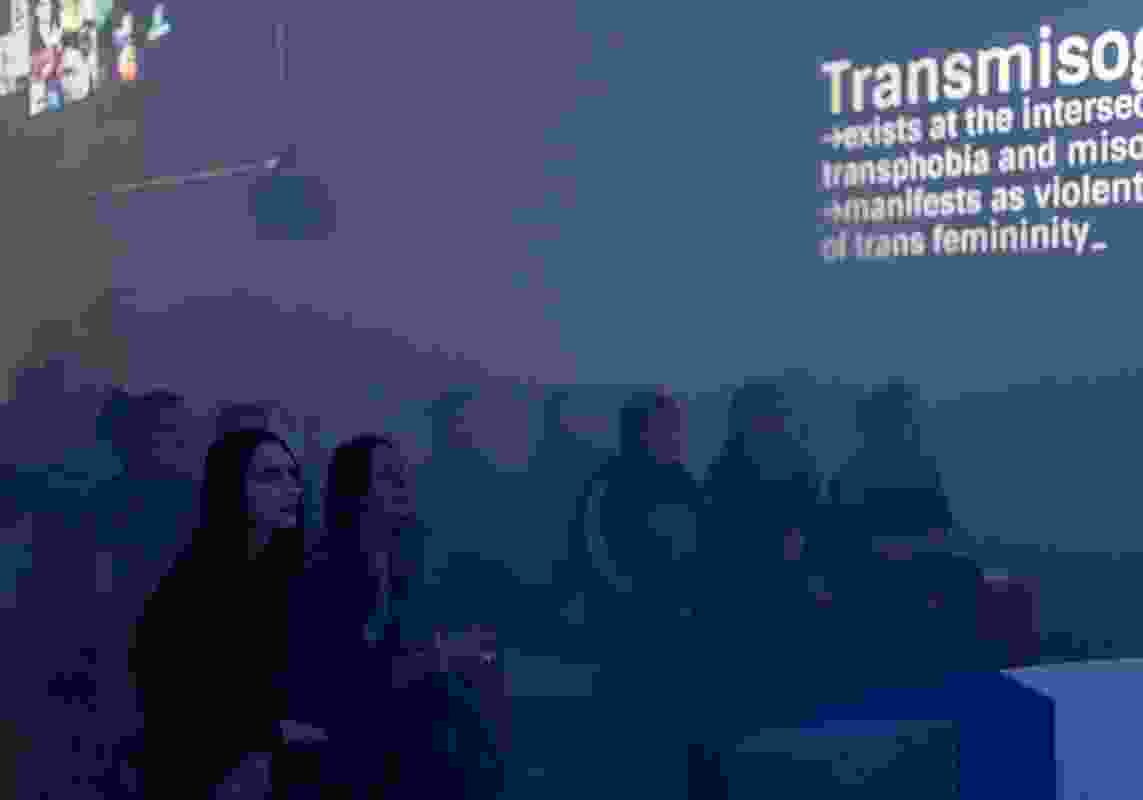