Harbour Bridge Not Deco
It interests me how a recurring myth keeps being repeated in the press so often that it becomes a truth: that the Sydney Harbour Bridge (SHB) is an art deco object.

The 1930s art deco style featured symmetry, stepped interplay of planes with regular use of ziggurat-like stepbacks, smooth finishes, often using coloured stonework, and motifs such as sunrays. A good example of an art deco object in Sydney is Sodersten’s building on the corner of Hunter & Bligh Sts.

The SHB is an accretion of styles that was typical of architectural designers during the 19th century and it is a continuation of that 19th century dilemma; namely how to deal with the new industrial age building requirements. The engineers knew how to create the new structures and the historical styles were applied to the front entrance by architects. I refer especially to London train stations such as St Pancras. Sydney’s Central Station echoes this dilemma at smaller scale.

Admittedly there are traces of smooth art deco surface treatment at the train porticos through the pylons. However that is all there is! The rest of the pylons use neo-classical decoration.

Take a close look at the entasis (notably used at the Parthenon) of the pylons as they curve inwards, the rusticated stonework on the vast majority of masonry, the long vertical slits for archers to shoot arrows through, plus the use of voussoirs and keystones in the train porticos; each pylon looks more like Lutyens’ Cenotaph in London than anything else. The blank coffin at the top of each pylon completes that reference to Lutyens.

The spanning arch rejoices in the ability of the engineers as it jumps between the two shores. Importantly, its form is derived from engineering principles as the arch is delicately sinosoidal. There is no formal reference to any architectural style.

If the labelling of the SHB as an art deco object refers simply to the non-functional aspect of the pylons, that is not enough. The pylons are definitely decorative but they are perceived by most as being part of the SHB. All images in popular iconography include the pylons as the defining edges of the SHB. The neighbouring facade object at the entrance to Luna Park displays more reference to art deco, but no-one would call that an art deco object. (The two towers have a more than close resemblance to the Chrysler building in New York; plus there is the sunray motif.) If a reading is necessary for the SHB, it should be something along the lines that architects were able to offer only memorials and facades, with the ‘real’ constructed objects being done by engineers as the technology of the day was able to over-ride the concern for death by piercing the memorial. That reading would make the SHB a huge joke on architects by engineers.

No Improvement on Seidler
In a year that has seen a celebration of the longevity, quality and consistency of the career of Harry Seidler, it is depressing to note the further denigration of his concept for Darling Park.

Regardless of what one thinks of the ground level interventions by Kuhne & Associates (which caused the Seidler’ split with Lend Lease), the revised treatment of the facade of the Stage 2 tower is bewildering.

Seidler’s long association with Lend Lease produced some of the most enduring towers of our city and he is universally recognised as a master of tower design. Australia Square still holds its place as one of Sydney’s best addresses after some 33 years, seemingly immune to the vagaries of fashion.

Darling Park Stage 1 followed in that tradition but sadly the embellishments to the facade of Stage 2 are self-conscious and piecemeal when compared to the controlled orchestration of the original.

Do the designers really believe that the changes are an improvement to the original concept, or is it a cost-cutting exercise? Whatever the case, the as-built design has ensured that the recent debate over the demolition of the State Office Block will never be repeated at Darling Park.

“Architects were able to offer only memorials and facades, with the ‘real’ constructed objects done by engineers” —Michael Neary, NSW

Trivial Review
The November/December issue of Architecture Australia provided much to stimulate and interest. However, I was disappointed in the Radar Books note on Sustainable Houseby Michael Mobbs. In my view, your comments show little understanding of the importance of the book or the building it represents.

The reviewer refers to ‘uncorroborated claims’ by the owner. Is the owner making dishonest claims? Surely a journal such as AA can come to a view on this—the issues are very basic and there are sustainable houses elsewhere to provide a comparison.

With regard to the sustainable performance of the building, the reviewer states that the cost benefit of … “these advantages are probably beyond the financial orbit of many eco-enthusiasts”. What eco enthusiasts? Aren’t architects interested? While it is true that the capital costs are high, the early days of CAD were not cost-effective either.

The reviewer also states that “it is significant that Mobbs persuaded various suppliers to install their products free or at a discount in return for promotional opportunities.” In fact it’s not significant, as I understand the amount saved in this manner is very small.

What is the purpose of the reviewer in making this comment? Does your reviewer have a view on the issue of sustainability?

I have visited the Sustainable House on five occasions with groups of overseas students. One can only be impressed with what has been achieved by a responsible citizen, who is not in the building industry, and at significant personal cost, but with a determination to provide a lead to society.

The issues of sustainability, energy use and the environment require professional leadership. It was with dismay that I read your rather trivial review.

As the writer, I combined general enthusiasm for the Mobbs’ sustainable house with some points of scepticism about its potential to be widely emulated in cities. Also, I am conscious that some basic platforms promoted by environmentalists are now being contested by mainstream scientists—Ed. 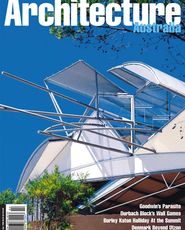