SYDNEY’S ROTATING CARTEL
This is not really about East Circular Quay (again); rather, it is a limited exposé of part of the system responsible for this avoidable fiasco and it is about the desire to ‘share the despair’.

The same ‘system’ is poised to adversely impact upon the likely future of Walsh Bay (a magnificent, coherent ensemble of buildings with soul), requiring careful upgrading, rejuvenation and appropriate usage.

Controlling the likely future of Walsh Bay is an invisible network, having as its accidental origins a de facto ‘cartel’ scarily comprising seemingly.reasonable people; a continuation of the same forces which engineered Jørn Utzon’s exile.
It goes something like this (the short version):
a) A limited group of large architectural organisations, including the Government Architect’s Office, usually control the Royal Australian Institute of Architects on a rotating basis. This delivers control of the RAIA Awards system, which confers status and some public exposure on the ‘players’.
b) This, then, generates inherent ‘credibility’ and a source of management power easily capable of hijacking the industry spokesperson role in matters to do with architecture, etc.
c) From this source also spring influential committees, including approving agencies such as Heritage Councils, advising government bodies re policy direction and acclamation, enhancing the revolving network.
d) Many major developers, not unnaturally, also source their collaborators from this arena, as it is rightly perceived that members of the current, high-profile ‘in group’ are useful in facilitating development approvals, all of course energetically assisted by the usual legal experts.
e) Governments also like the established system, as it is more comfortable to deal with bureaucracies that understand other bureaucracies.
f) The situation is compounded and enshrined through control of architectural magazines and, worse, by journalists who lazily round up the usual suspects for easy commentary in relation to periodic items of perceived architectural interest.
g) Importantly, architects within the closed loop/network are loathe to make candid comments on issues and projects involving the ’cartel’ members, because of the interlocking nature of the power-sharing arrangements; hence, prominent fiascos result: East Circular Quay.
h) Most architects are well aware of this persuasive network; understandably, the self-preservation instinct usually is enough to prevent too many waves.

A further difficulty is the deliberate, ridiculous and comical language perpetuated by the architectural fraternity, seeking to ‘out-clever’ each other and alienate outsiders in the process.

So, East Circular Quay is gone. A depressing thought lingers: the players from the same pool of ‘usual suspects’ have been unleashed upon the Walsh Bay development.

I am not a “failed tenderer”, nor close to one. Are there any starters for a Walsh Bay demonstration/show of force, whilst this complex is still intact and salvageable?
–From Feiko Bouman, McMahons Point, NSW

Reply from Michael Peck, RAIA CEO:  Readers will no doubt form their own opinions about the substance of Feiko Bouman’s letter.

FIFTH CONTINENT UPDATE
In the July/August issue of Architecture Australia, the Radar Headlines information about the exhibition  5 from the 5th Continent: Architecture from Australia was incorrect and omitted two exhibitors.

The opening was on June 15 at the Architekturforum, Tirol, Innsbruck, Austria. Professor van Schaik presented a lecture at the opening which was followed later in the week by lectures from Black/Neille and Busfield/Tarry.

The exhibition travels to Stuttgart, Germany, October. It opens at the Architekur-Galerie am Weissenhof on October 19. Kerstin Thompson and Neil Durbach will each present a lecture at the opening.

March 1999, the exhibition opens at the Haus der Architektur, Graz, Austria. Afterwards, it is scheduled to travel to gallery venues in Hamburg, Munich and Copenhagen. 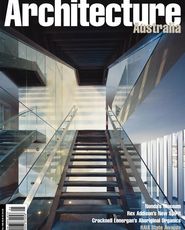