Yes, Bill McMahon’s selection in the Architecture of East Australia is a little curious. However, he is not altogether wrong, as Philip Goad suggests, in the spelling of Emil Sodersten’s name (AA January/February 2002). At the time he designed his most accomplished works, he was indeed Emil Sodersteen, but he changed his name later.

I was pleased to read Harriet Edquist’s review of the Sidney Myer Music Bowl (AA January/ February 2002 ). In setting out the historical context for this building Dr Edquist described how Yunken Freeman Architects, through Barry Patten, secured the commission for the original project by coming up with a better idea. Disappointingly, she fails to mention that the idea of developing the innovative tension structure was conceived jointly by Barry Patten and engineer Bill Irwin of the emerging firm of Irwin Johnston & Partners. Having recently completed the spectacular Olympic Pool project, Bill applied his genius for combining architecture and engineering to help Barry come up with the winning concept for the music bowl.

Despite missing out on the project, Robin Boyd was to write, in a 1967 article for Architecture Australia, that the two climactic buildings of the 1950s were on opposite sides of the Yarra River - the Olympic Pools building and the Sidney Myer Music Bowl.

Boyd went on to state that these buildings had in common two elements; tensile construction and Bill Irwin, an engineer with the courage of his architects’ convictions!

In this pre-computer era, it was Roy Johnston, Bill’s partner in the practice, who applied his detailed mathematical skills to this deceptively simple yet structurally complex project in order to make it a reality.

It is a tribute to all those involved in the orginal project, that the building has stood the test of time and was able to be refurbished to continue as one of the icons of Melbourne, and one of the largest, most spectacular tension structures in the country.

If the redevelopment of Windsor Court is considered purely in the light of architecture, the points Mr Blythe raises may be valid.

Windsor Court comprises 105 units (not 50 as claimed by Mr Blythe) and presents a number of major problems for tenants, including poor access, lack of privacy and inadequate parking. Major modification, as suggested by Mr Blythe, would require a high level of expenditure, yet would not solve many of these problems.

The design competition was won by Hobart firm James Morrison and Yvette Breytenbach Architects. The winning design, named ECOCOSM, will cater for the needs of tenants within an adaptable and energy efficient environment. The option of demolishing Windsor Court and redeveloping clearly delivers the best set of social outcomes for Tasmanians.

• Our apologies for any sense of dislocation caused to South Australians by our suggestion, in Radar Headlines (AA January/ February 2002), that last year’s National Awards ceremony was held in Canberra.

The event was, of course, held in Adelaide. 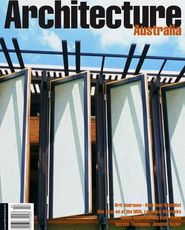