Melbourne City Drain Painters trip the light fantastic in some of the city’s dark and neglected spaces. Graham Crist takes a look.

Glue Factory by Dave Harkin, operating with the MCDP.

The first show for the Melbourne City Drain Painters group was recently exhibited at Guilford Lane Gallery and it was a standout. This group of light painters and urban explorers visit dark and neglected interior spaces, most notably, Melbourne’s extensive underground stormwater network.

Using extended photographic exposure to make strings of light is an old technique, but here it is super sophisticated. Moody dark shots of abject urban spaces are here intensified by the extraordinary events going on in them. At first, the images look like renders made in the virtual world – it takes a blink to believe they’re photos of a live event. They are hyper real, and fascinating for architects who spend time in the virtual world trying to simulate the real. There are architectural revelations here, opening up views of unknown built spaces. As a record of that urban exploration, they’re not just detached views; they show temporary inhabitation. Some appear like religious icons, some as meditations on suburban loneliness.

The relationship between the exploration and the image technique is most fascinating. Unlike performance art, this image is not just a record of an event (“you had to be there!”), even though the adventure and the theatre is necessary. You also need the camera and long shutter speed to do its work. As one of the group said – “its not that much to look at when you’re there.” And it’s not like graffiti (there’s no permanent mark left on the physical space) though it often interacts with found graffiti. The architectural setting, the performance event and the camera tricks are all completely reliant on each other. It is three genres pressed together.

I also like the visibly shared agenda of the truly group series; five artists represented by nicknames where each of the images is coherently part of the same effort. And incidentally, the images are beautiful. The new top floor gallery at Guilford Lane is a perfect venue for the work – somehow it gels with the raw spaces explored in the photos. This group is prolific and exciting – I hope to see a lot more of it and recommend you check it out. 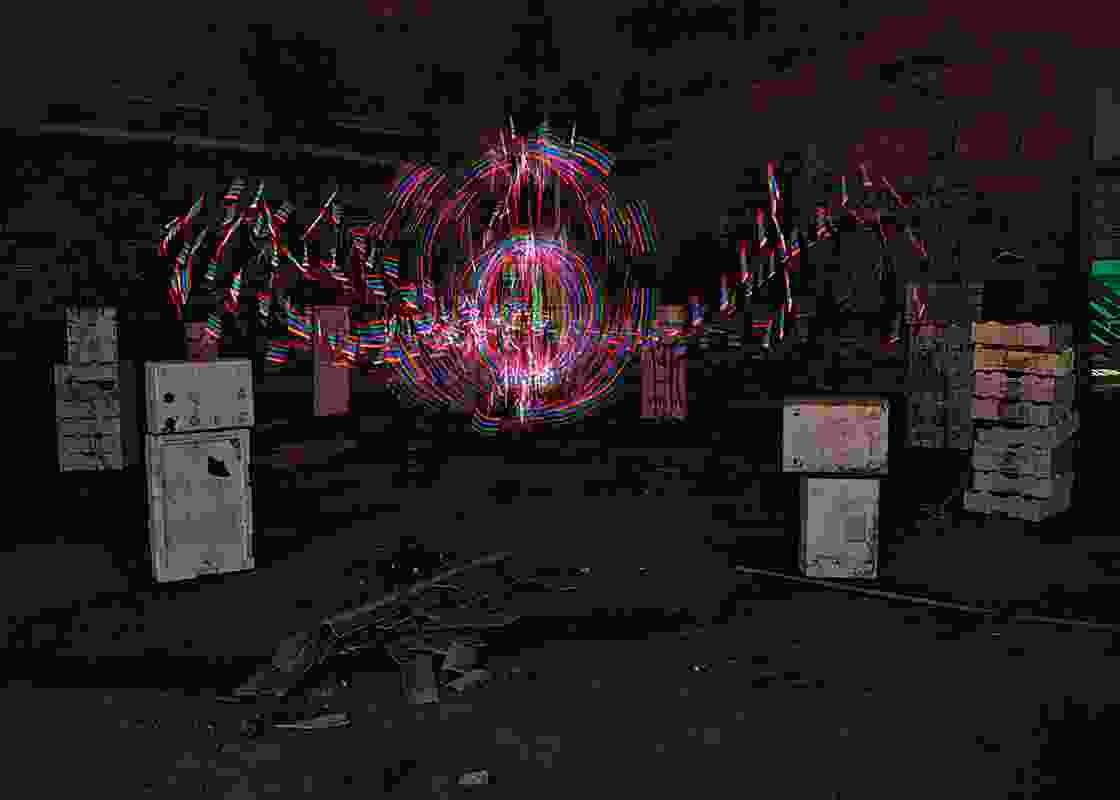 Glue Factory by Dave Harkin, operating with the MCDP.