North-eastern corner, opposite the Great Hall. On the upper floor, the mirrored facade conceals the function room, while the “Ned Kelly” window intersects the deck.

Paradoxically, Brisbane Grammar School’s new integrated learning centre is both deferential and assertive within its highly visible site. A sophisticated billboard addressing passing commuters en route from their city workplaces to home, the $26-million-dollar library and teaching facility on a prominent cliff top visibly connects with the city. At the same time, the design cleverly disappears when necessary to become a theatre backdrop, a self-effacing mirror, a frame or a missing puzzle piece, ensuring the significant heritage setting is not overwhelmed. Called the Lilley Centre, the building contains the library, a range of technology-rich teaching spaces, areas for informal learning, a lecture theatre called the Forum, a Year Twelve centre and accommodation for technology, and counselling staff and services. It has been opened just a few weeks but has already become a favourite place for students before, during and after school.

The client body of Brisbane Grammar School should be congratulated for using a competition process to select an architect capable of dealing with this most difficult and delicate site. In the hands of a lesser architect, particularly one without a strong knowledge of education and a connection to this particular school, the building could have been a disaster. It is a site where small mistakes would have been compounded. The school’s significant collection of heritage buildings had been concealed from public view by overgrowth on the hilltop site. Opening up views to the Great Hall and constructing what is effectively a four-storey building alongside a major arterial road signified a brave decision by the school community to represent this already esteemed school as one engaging with twenty-first-century learning. The building is a new badge for the school; its marketing presence should not be underestimated. The building’s message is strong, subtle and sophisticated. This is a school where learning is taken seriously; it is a school that is not afraid of the future while still respecting the past.

As we walk through the school grounds towards the new building it shimmers, almost disappearing, becoming a two-storey-high reflection of the 1881 Great Hall. What architectural sleight of hand has enabled the architects to diminish the building’s mass so effectively? Zinc-clad walls act as tweezers, gently positioning the mirror facade. A Ned Kelly balcony opening reveals the sky behind, giving the sense that this wall is hovering like a sheet of paper. One entry is slipped alongside the building into the double-height foyer or Learning Commons. Here the building enclosure is a sheer wall of frameless green glass under a folded floating roof plane, softened by a fringe of perforated aluminium sunshading. A second main entry point opens onto the Boarders’ Lawn. The north facade, viewed from the Boarders’ Lawn, takes on an almost domestic demeanour at odds with its real scale. From this angle, the building reads as a series of transparent and translucent screens or veils helping to define the lawn while signifying an open access to learning.

The more monolithic western facade conceals services within solid brick walls that also support the zinc carapace of the lecture theatre. The brickwork datum continues along the south facade and extends away from the building to the east. Here it forms an outdoor pavilion marking a third entry point into the building, this time to the lower teaching areas. The elevation to busy College Road is carefully composed, with vertical sunshading fins to the south-west that visually unzip to the passing drivers. As the building angles to face south, the lining changes to a barcode pattern of translucent glass channels.

The Lilley Centre sits physically large within the campus plan, its footprint twice the size of any other building on campus, exacerbated by being four storeys high. It is located diagonally opposite and slightly overlapping the facade of the Great Hall. It is a bold urban gesture for the “new kid on the block” to step in front of the long-established Great Hall, but the boldness of the building’s location in plan does not play out in its built form. The architect uses five urban strategies to deal with issues of scale and heritage. The building is composed as a series of backdrops or screens addressing the campus; these screens are detailed to reduce their apparent mass with no visible roofing over; a mirrored facade is turned deferentially to face and reflect the Great Hall; the carefully composed palette of zinc, timber and glass harmonizes with the existing natural and built fabric; and, finally, the topography of the site is used to conceal the lower two storeys from the school.

Inside, the public spaces provide a variety of theatrical settings allowing for extrovert participation, or introverted reflection, or simply a spot well placed for observation. The stair in the Learning Commons can be a stage or observation platform. The upper-level Function Centre is a place to view the city and for the city to view the school. The generous southern passageways on the lower levels are delicately veiled with translucent cast glass channels.

The architect, Hamilton Wilson, describes the Lilley Centre as a “significant transformative, symbolic and pedagogical shift from the school’s nineteenth-century roots”. In this building, learning is visible rather than hidden within the private walls of classrooms. Two decades ago Brisbane Grammar School began a process of curriculum transformation, moving towards integrated learning where information and computer technologies (ICT) work seamlessly with pedagogy, resources and environments. Technology-enabled learning is extravagantly visible in all parts of the building. Learning is still predominantly table-based but the tables are large enough to seat six students around a digital screen with or without tablets, laptops or netbooks. Four classes of thirty students are laid into a cloverleaf so pairs or all four might combine with the opening of acoustic walls. Table edges are colour-coded and numbered to help with organization. Portable smart boards, LCD screens, document cameras and computers are linked using a DyKnow software system to support collaboration and communication.

Wilson Architects is familiar with current discourse in pedagogy – a majority of the practice’s work is in the education sector. Hamilton Wilson was a participant in an ALTC (Australian Learning and Teaching Council) research project into effective learning spaces with Queensland University, and he understands how ICT has released schools from having to take a “chalk and talk” approach. Wilson suggests learning spaces now need to accommodate four learning modalities: didactic, active, discursive and reflective. While many new schools incorporate spaces for informal learning in the class areas, the solution in this building was to use technology to enable all four modes to be accommodated at collaborative tables. The resulting impression is that the teaching spaces are somewhat conservative compared to the learning landscapes increasingly being developed in which students move between spaces, sometimes standing, sitting or lounging. Technology-enabled flexibility in which a variety of learning modalities can occur in one location is a design approach needing further research to gauge its success in comparison with schools that provide more diverse settings.

The students are enjoying the new library facility. Instead of going home after school, many students are choosing to stay behind in the library, finding comfortable spots on the oversized circular ottomans or the elongated couch along the east facade. Others are hanging out in the expansive foyer, minimally furnished with a two-line array of table settings – one lower, one higher – inviting collegiate learners to work in informal groupings. Within this foyer or Learning Commons, quirky stepped seats brightly define the raised platform while mediating a change of level. Tables adjoining the northern glazed facade are each headed by an LCD screen, giving an intimacy and focus reminiscent of a 1950s cafe booth with jukebox.

Apart from this gentle touch in the foyer, the designers refrained from giving this building the playfulness that is increasingly present in educational buildings and offices such as the various Google offices, the Saltire Centre in Glasgow, the Fawood Children’s Centre in London, TK Park in Bangkok and Unlimited Paenga Tawhiti in New Zealand. Even the upper-storey spaces set aside for counselling and use by Year Twelve students are aesthetically underplayed. That is not to say that the architects and the school teachers are unfamiliar with the potential of informal learning spaces and how learning is transforming across the education sectors. Wilson Architects designed a suite of interventions at Queensland University to help support a transformation in teaching of engineering students. These engineering spaces are overtly contemporary learning landscapes and yet the architect describes the Lilley Centre as his highlight opportunity to work with a teaching community intimately familiar with the potential of space and technology to support current thinking in pedagogy.

Learning is taken seriously in this school environment and is considered to be at the heart of every student activity, from rugby training to science experiment. In support of a quality education, this building has had serious money spent on it. The extent and quality of provision for the elite student group was unsettling when compared with the state government prefabricated learning environments I had visited earlier in the day. That said, learners and teachers in each setting appeared to share the same commitment towards active and effective twenty-first-century learning. 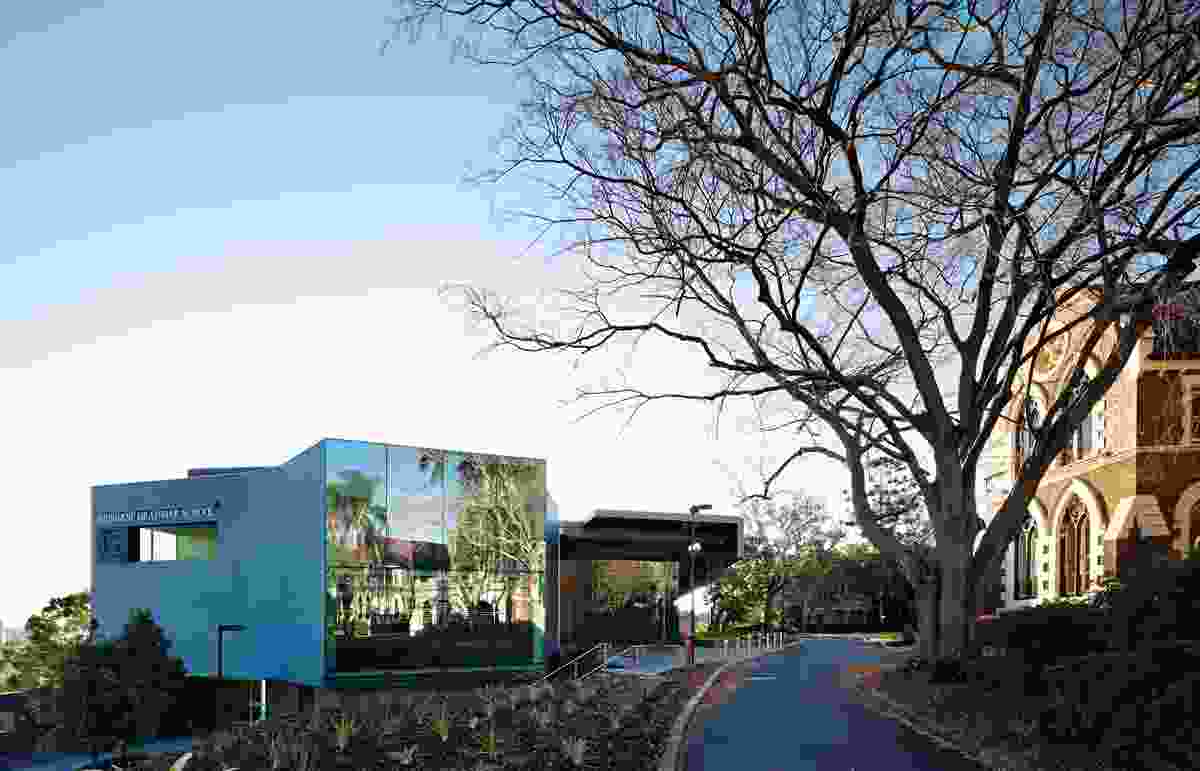 North-eastern corner, opposite the Great Hall. On the upper floor, the mirrored facade conceals the function room, while the “Ned Kelly” window intersects the deck. 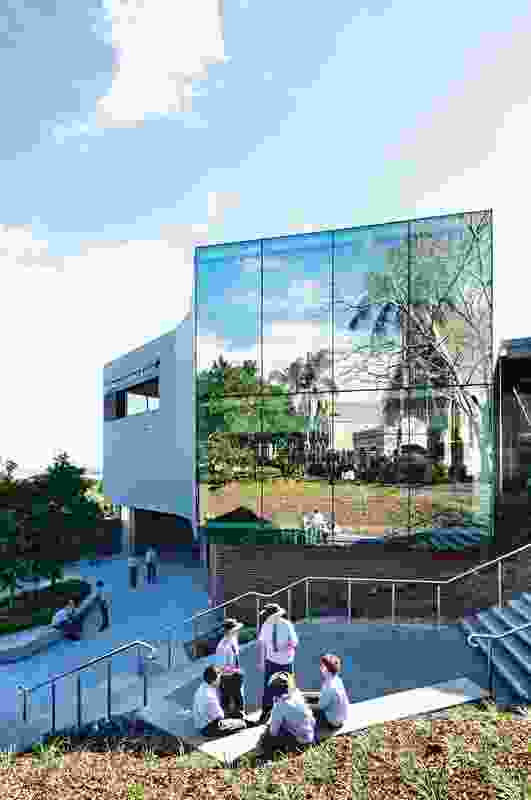 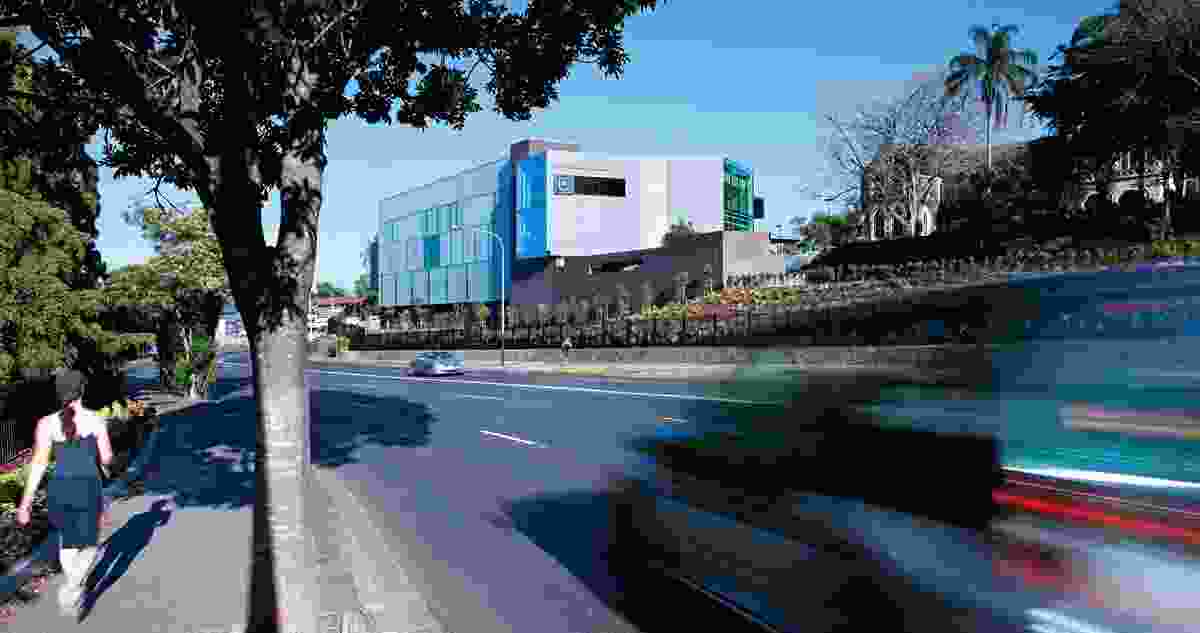 The southern facade presents a solid face along College Road. View of the open northern facade across Boarders’ Lawn. 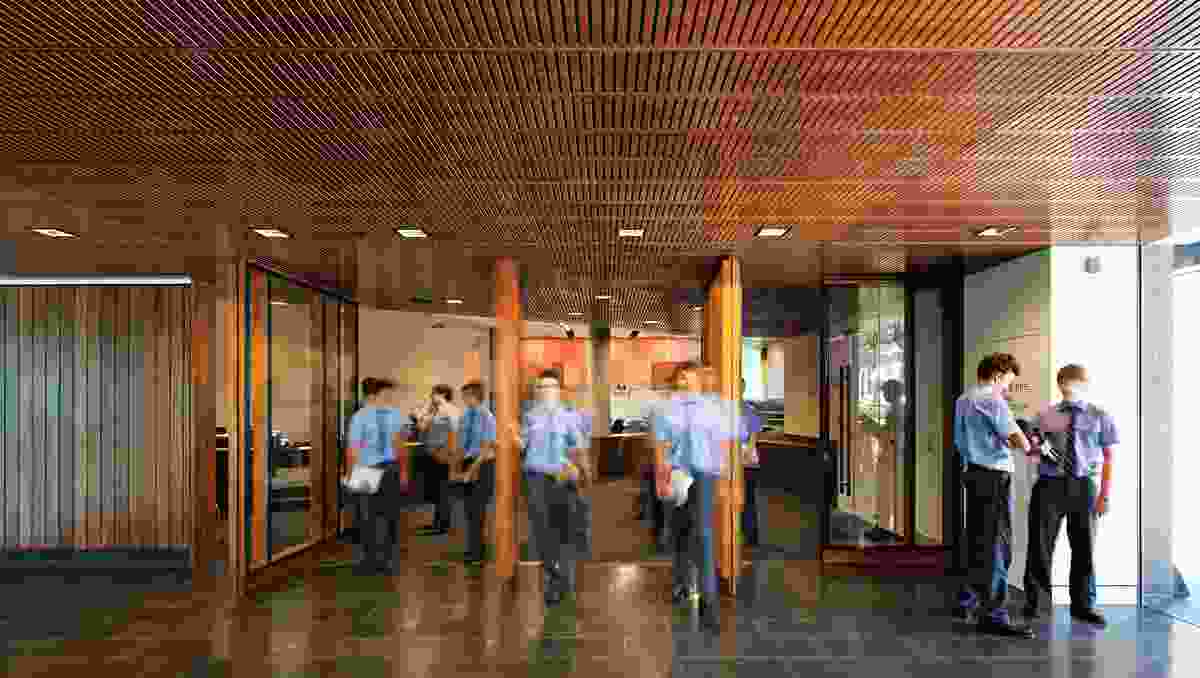 A sense of permeability has been designed into the centre. 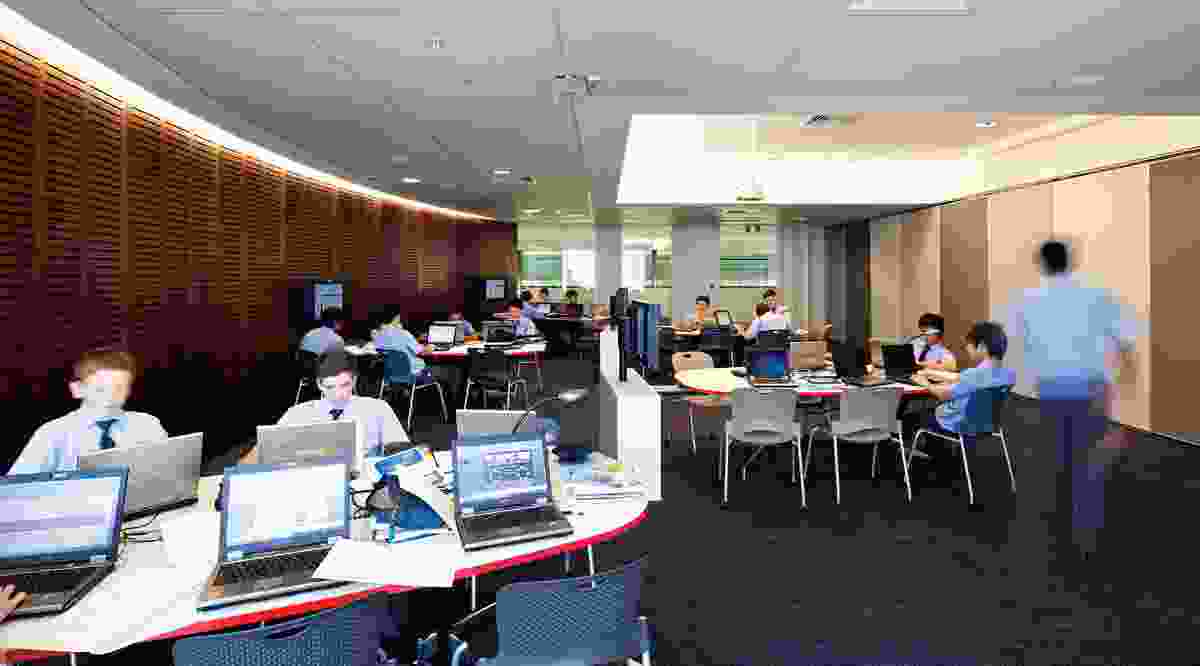 Flexible teaching and learning spaces are supported for technology throughout the building. 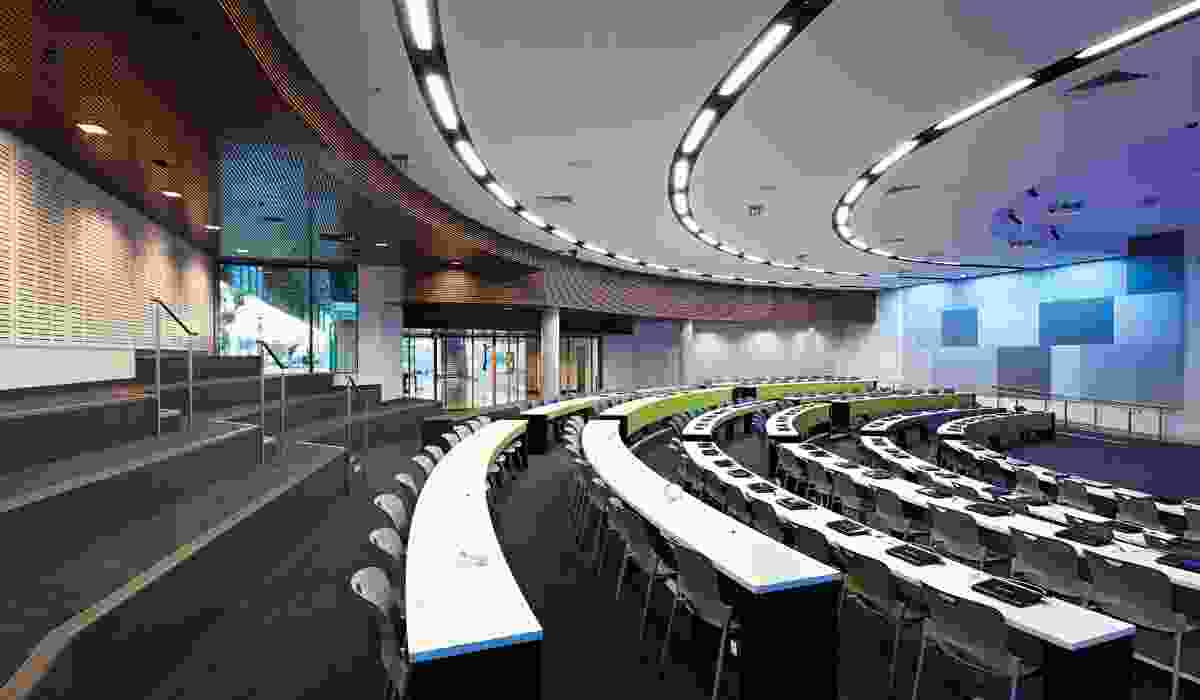 The forum on the ground level. 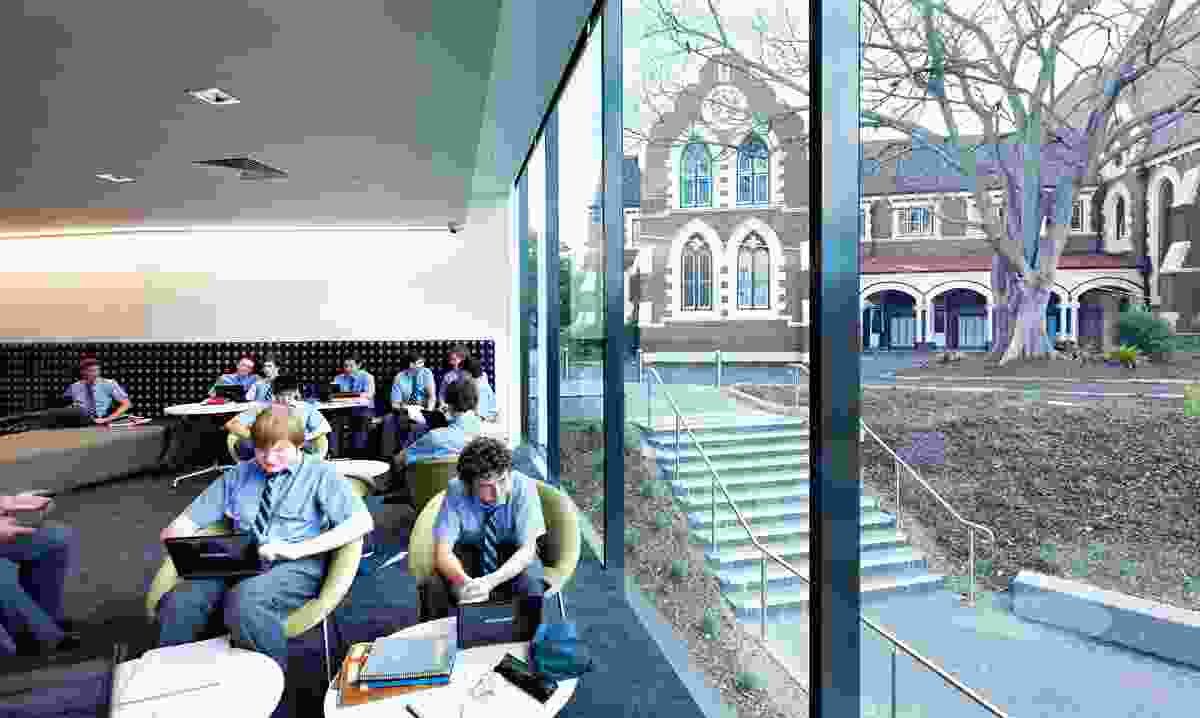 View of the Great Hall from the ground-floor quiet reading space. 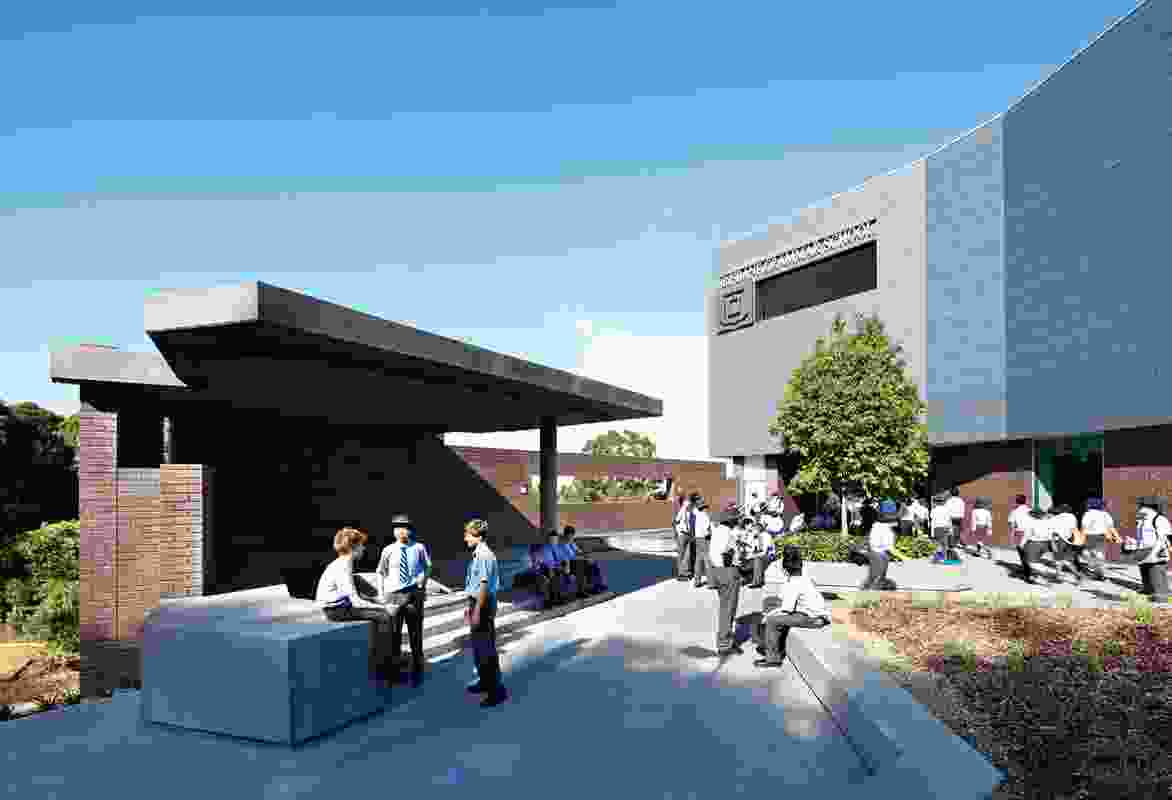 An outdoor pavilion around the eastern facade marks the entry to the lower teaching areas. 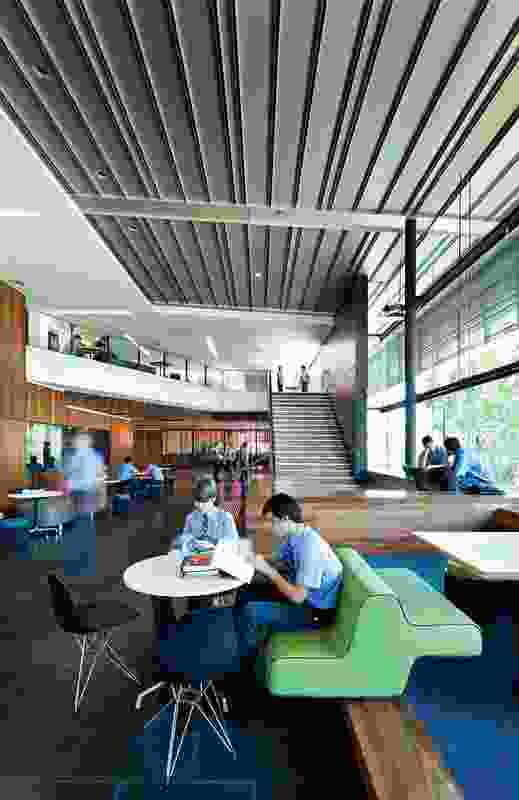 The popular learning commons strip along the northern edge of the building.