Taking inspiration from a protected moth, Redgen Mathieson’s design for Little National Hotel is a new concept that brings the idea of affordable luxury to Canberra’s hotel market.

Presented as a white glass box, The hotel lobby is located on the ground level. Internally, a glass facade cocoons the lobby space from the utilitarian carpark.

What do a multistorey carpark and a critically endangered moth have to do with innovative hotel design? Stumped for an answer? No, this is not a trick question from an architectural practice examination. Instead, it was the real-world conundrum that faced design studio Redgen Mathieson in its design of Little National Hotel in Canberra.

Clues to unravelling Little National’s curious development are given as you approach the building. Canberra is known for its broad avenues and verdant nature strips, but the fenced-off field of overgrown grass and flowers that adjoins the hotel does not have the usual manicured appearance. In this small patch lives a colony of the protected golden sun moth – a factor that greatly influenced the design of the hotel, both its exterior and its interior. Further complicating the process was the fact the development was originally conceived as a four-storey carpark, to which the client then decided to add two levels of hotel accommodation to the top. This meant that Redgen Mathieson had to work with the predetermined carpark grid as the base module for the hotel rooms – all while not disturbing the moths.

With Little National being located in the suburb of Barton, close to Parliament House, design codes dictated that the building could not look like a carpark. Redgen Mathieson director Harlan Redgen says the studio’s approach was to create an envelope that was neither overtly residential in language, nor of course, like a carpark. The carpark’s levels are clad in perforated black metal panels, while the hotel is faced in black glass. Articulation of the carpark facade is achieved through what director Phillip Mathieson calls “wings” that allow ventilation of the levels. The edges of these wings are marked in the colours of the golden sun moth, providing shots of contrast, while acknowledging the building’s small but important neighbours.

Little National is the latest addition to development company Doma Group’s hotel precinct in Barton. The hotel is positioned in the affordable range of the market, and its owners wanted to offer “affordable luxury” for the urban traveller “without compromising aesthetics or design.” This stance is first announced in the ground-floor lobby, adjacent to the carpark entrance. Mathieson says that the first challenge of the interior was “how to deal with luxury in a carpark.” Redgen Mathieson plays on this aspect by including a polished concrete floor that continues the language of the carpark, offsetting this with the lux of travertine walls and white translucent glass. The most striking aspect of this entrance space is the American oak reception desk. Designed as a pair of oversized trestle tables and positioned askew, the entrance space is a deliberate tactic to reduce the formality of the experience. By avoiding the monumental stone reception desk cliché, it clearly states that this is not a stuffy five-star hotel, even though the design standard is just as good. Hotel manager Kathryn Carling is enthusiastic about the open design of the desk, stating that it “breaks down the barrier between staff and guests” and that the lobby as a whole “sets you up for the experience that is happening upstairs.”

As you exit the lifts on the accommodation levels the first thing you notice is the generosity of space and the amount of natural light. A pair of large black-framed mirrors is propped up against the wall, adjacent to vitrines with paper-cut artworks by Benja Harney inside. Redgen Mathieson commissioned Harney to create a series of works inspired by the life cycle of the golden sun moth. These are used throughout the circulation spaces as wayfinding devices, and also serve to educate the interested guest. Off the lift lobby are the communal spaces: the library on level five, and connected via an extremely elegant staircase, the lounge on level six. As the majority of the hotel’s weekday guests are visiting Canberra for Parliament and its associated buzz, there was a need for spaces that could accommodate meeting and working. The library is furnished with black-stained joinery with well-designed lamps by Redgen Mathieson, and upstairs the black theme continues with the monolithic black granite dual fireplace that separates the lower lounge area from the upper velvet-clad lounges.

Known for its design and aesthetic rationalism, Redgen Mathieson has deployed its skills in distilling the essence of a great hotel room into a compact space. Literally no wider than a bed, the room contains everything you need for a comfortable luxurious stay into a few square metres. The standout feature is the four-poster raised bed that is paired with the full-height glass wall looking out over Canberra. This creates an intimate feel of a nest, or loft, rather than a large bed in a small room. Redgen says that this was a “big gesture in a small room,” while Mathieson adds that in “such a small space it becomes all about the bed.” Carling assures that staff have no problems making the beds. Rather than carpet, Redgen Mathieson pushed to have solid timber flooring, and the charred-finish timber further adds to the experience.

Little National is the fourth hotel project Redgen Mathieson has worked on with Doma Group. Mathieson says that unlike working with a large hotel chain they are able to work directly with the client, meaning “there is no rule book.” By challenging the notion that “luxury” always equates with “large,” Redgen Mathieson has proposed a new model of hotel that while compact on space is still big on experience. 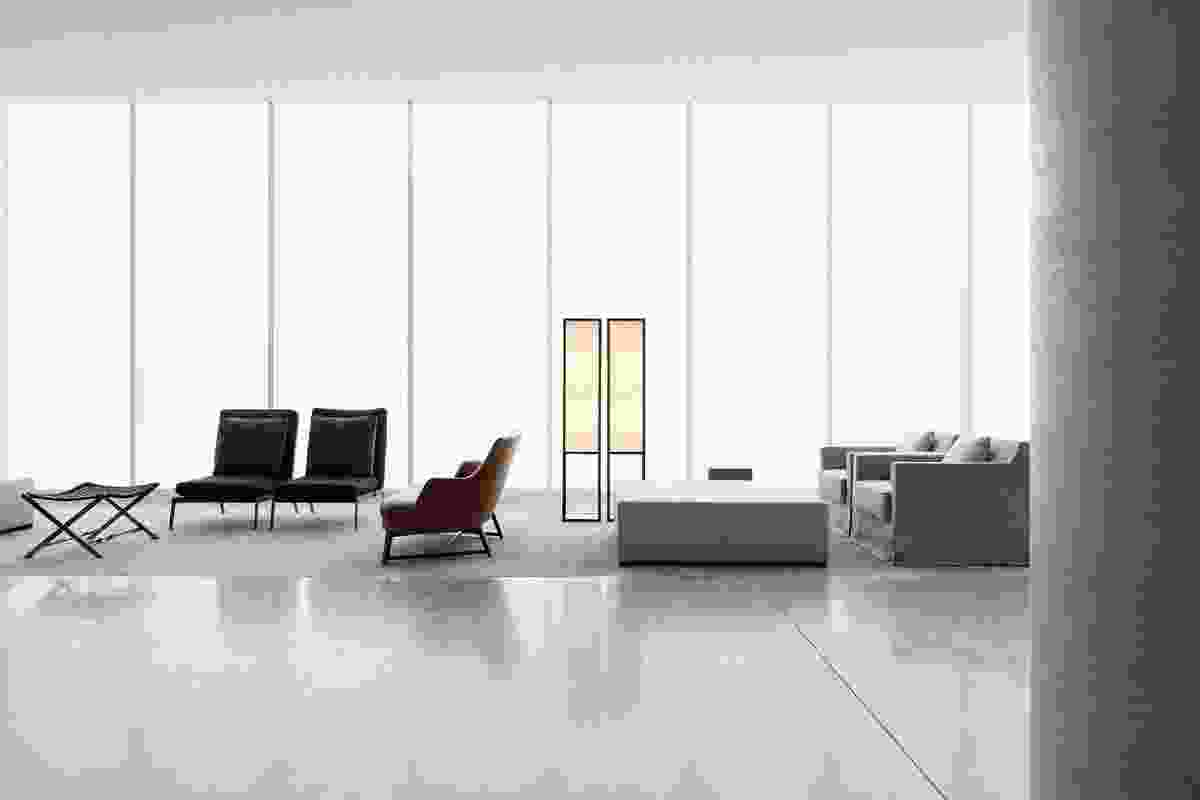 Presented as a white glass box, The hotel lobby is located on the ground level. Internally, a glass facade cocoons the lobby space from the utilitarian carpark. 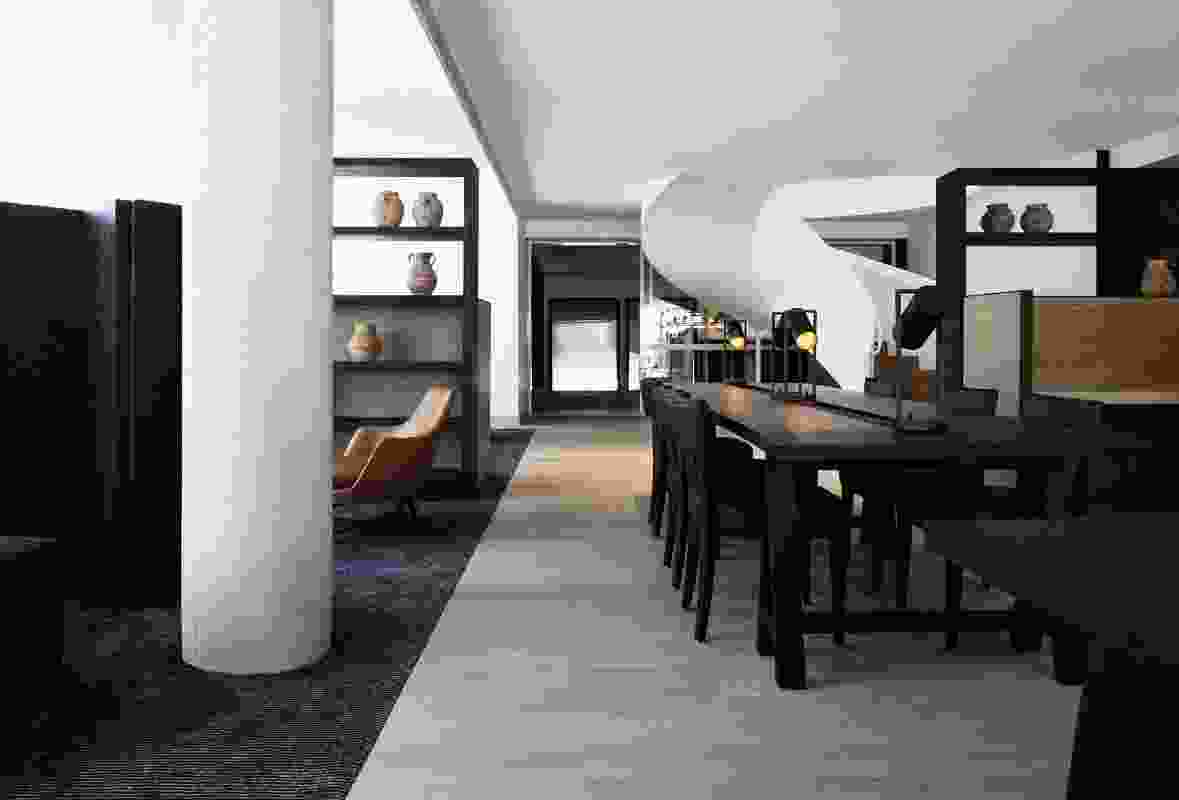 The library provides guests with a space to work and includes private and communal work areas. 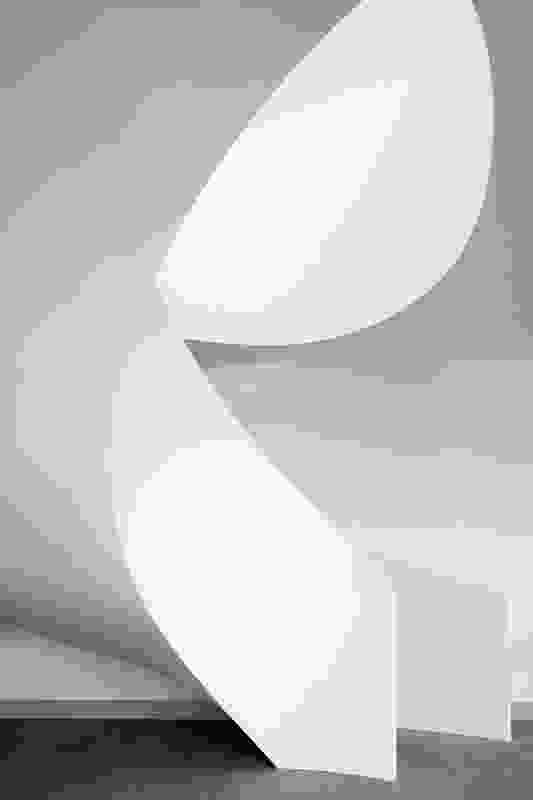 A sculptural spiral stair connects the library and lounge spaces. 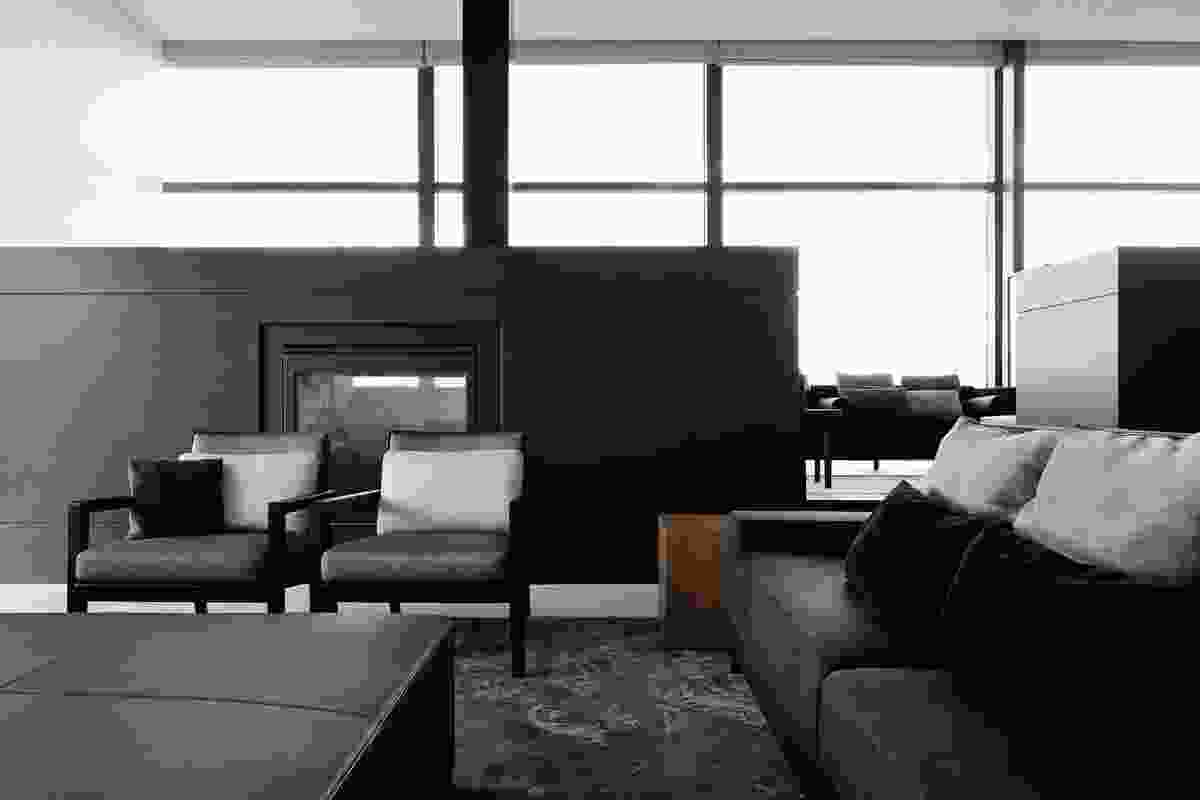 The communal lounge on level six incorporates comfortable furniture and two fireplaces. The lounge has views to Parliament House and Mount Ainslie. 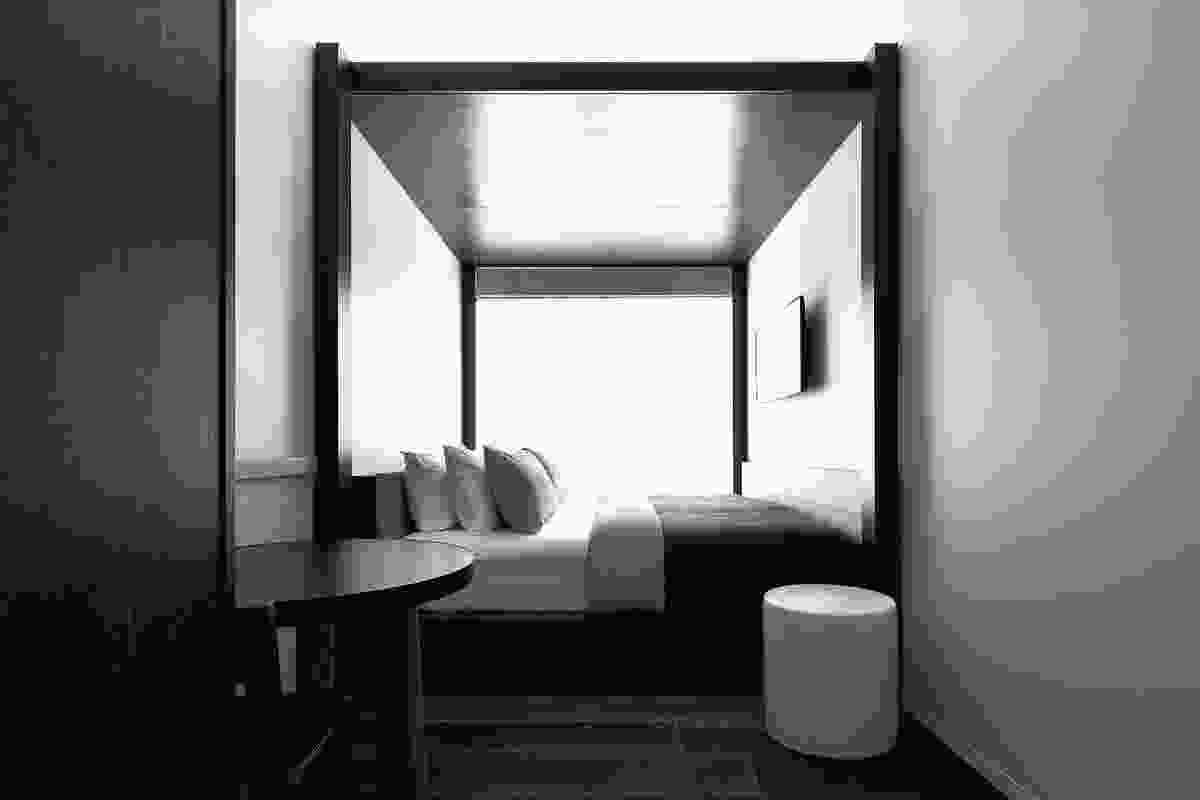 The guest rooms are based on the size of a carpark space. The rooms are planned efficiently, with a king-size bed and a large picture window. 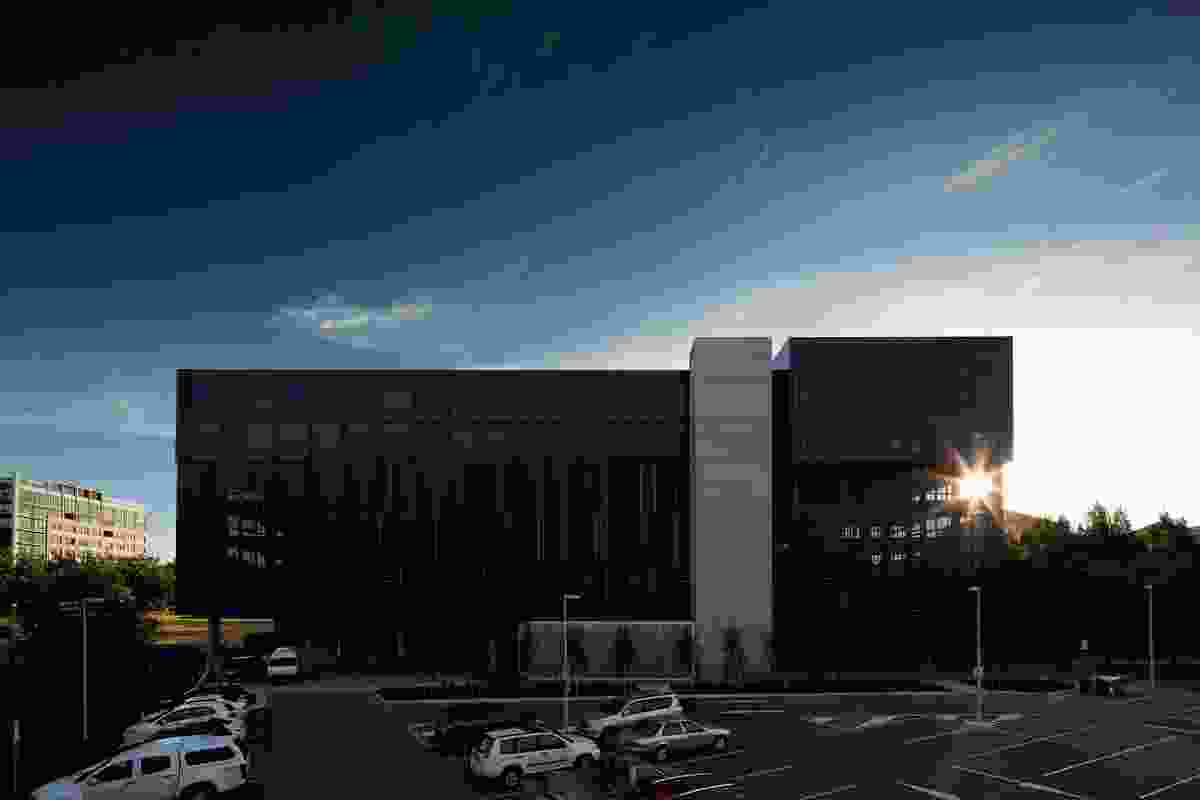 The hotel is located on top of a four-level carpark. Dark metal panels clad the building, and edge strips in bright orange gold reference the Golden Sun Moth.