‘Living room in the garden’: OMA’s MPavilion to ‘steer debate about the city’

The 2017 MPavilion will be a forum for “critical debate,” say Dutch architects Rem Koolhaas and David Gianotten of the Office for Metropolitan Architecture (OMA).

The structure, the fourth in a series of pavilions commissioned by the Naomi Milgrom Foundation for Melbourne’s Queen Victoria Gardens, forms a space which “creates a point of activation in the city and also creates an environment in which it is easy to communicate,” the 2000 Pritzker Prize laureate Rem Koolhaas told ArchitectureAU.

“We consider this pavilion a tool – a tool for [the public] to use to discuss the future of [their] city. But it’s also a tool and a framework for us to discover another culture and to be active in another culture.”

Inspired by ancient amphitheaters, the structure consists of two tiered grandstands – one of which is static while the other pivots on a fixed point. The grandstands form a circular space on the ground that is surrounded and embedded into the gardens by a landscaped berm covered in indigenous plants.

A 19 by 19 metre square, gridded steel canopy clad in aluminium floats above the grandstands. The underside of the grid is fixed with an advanced lighting system, which has been designed by Bluebottle to illuminate a variety of free public events.

The “tension” between the circular amphitheater space and the square roof is intended to “create different types of layers that communicate together,” said David Gianotten, managing partner-architect of OMA.

“The idea was to create a centre in its standard configuration and create an intimate space where 250 people could gather together in a quite small space but still be comfortable.

“The roof is a grid inspired by theatre grids, which allows all kinds of possibilities to hang things from and to activate the space.”

Koolhaas adds, “In a way, [the form is] neither here nor there. It’s a framing device for the park and the city that is almost independent of the shape.”

“The grandstand can turn 360 degrees. It can address the park and it can refuse the park. It can make an intimate space, a linear space and all kinds of different types of configurations for different activities, which can’t be prescribed.

“Pavilions are very often about debate and experiment and for us that is more important than being an object or being beautiful.”

Unlike previous MPavilions, Koolhaas and Gianotten’s pavilion creates tiered seating within the design as well as a storage space underneath the grand stand.

“One of the key things for us was to work with the program [of events],” Gianotten said. “The program actually is about debate, gathering and performance and that needs to be addressed by the design.”

The architects have worked with the organizers to influence some of the events and discussions that will be taking place during the MPavilion’s four-month residence in the gardens.

“The program is very rich and addresses many different domains from sociology to music,” Koolhaas explains. In particular, there will be discussions around designing cities for the elderly and for the children. “Those are rarely discussed subjects but actually, if you look carefully and if you think about the future, they are crucial.”

Gianotten adds, “Another one for us is how can Melbourne transform from an ‘iconic’ city and the ‘most liveable city’ that’s really defined by its centre, into one which is discussed in terms of the metropolis because it has become so big and so vast but nobody talks about what is beyond the known boundaries.”

“The outer parts of Melbourne are taken for granted but why would they not be an integral part of the planning and therefore something that can contribute to the heart of the city?”

In addition to the program of events based at the MPavilion, for the first time and due to research conducted by OMA’s think tank AMO, the program will extend to Victoria’s regional centres, which has been devised by Sarah Lynn Rees of Indigenous Architecture and Design Victoria in collaboration with the Shepparton Art Museum and Geelong Gallery.

The 2017 MPavilion is the first among OMA’s Australian projects to be completed. “We hope this place will become a living room in the garden, which looks out towards the city with thoughts of architecture, planning, art and performance.”

Programs and events presented by MPavilion will run from 3 October 2017 to 4 February 2018.

In July 2017, the Naomi Milgrom Foundation announced that two more MPavilions will be commissioned.

‘Living room in the garden’: OMA’s MPavilion to ‘steer debate about the city’ 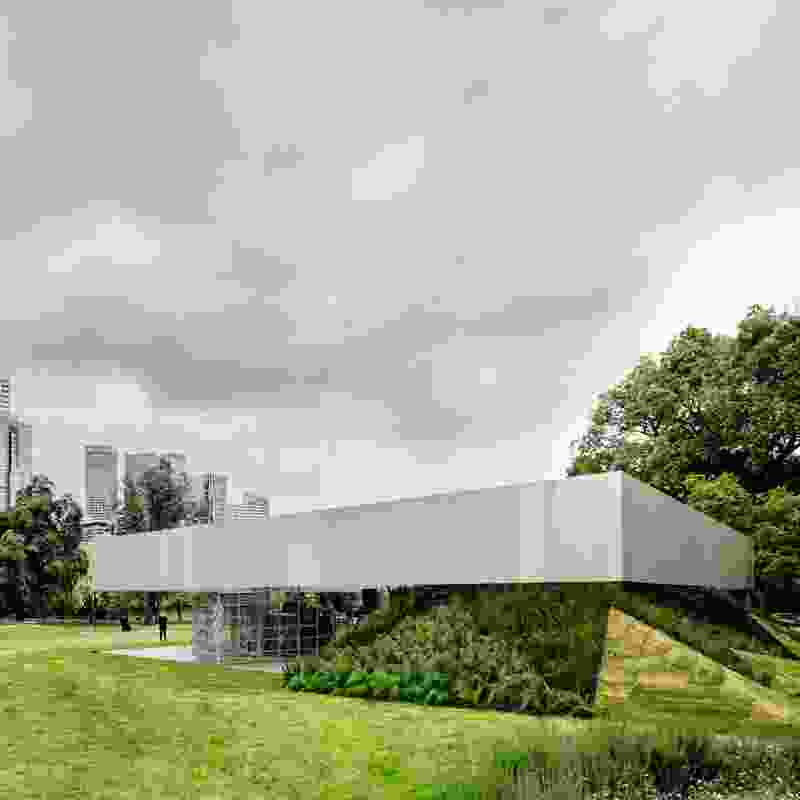 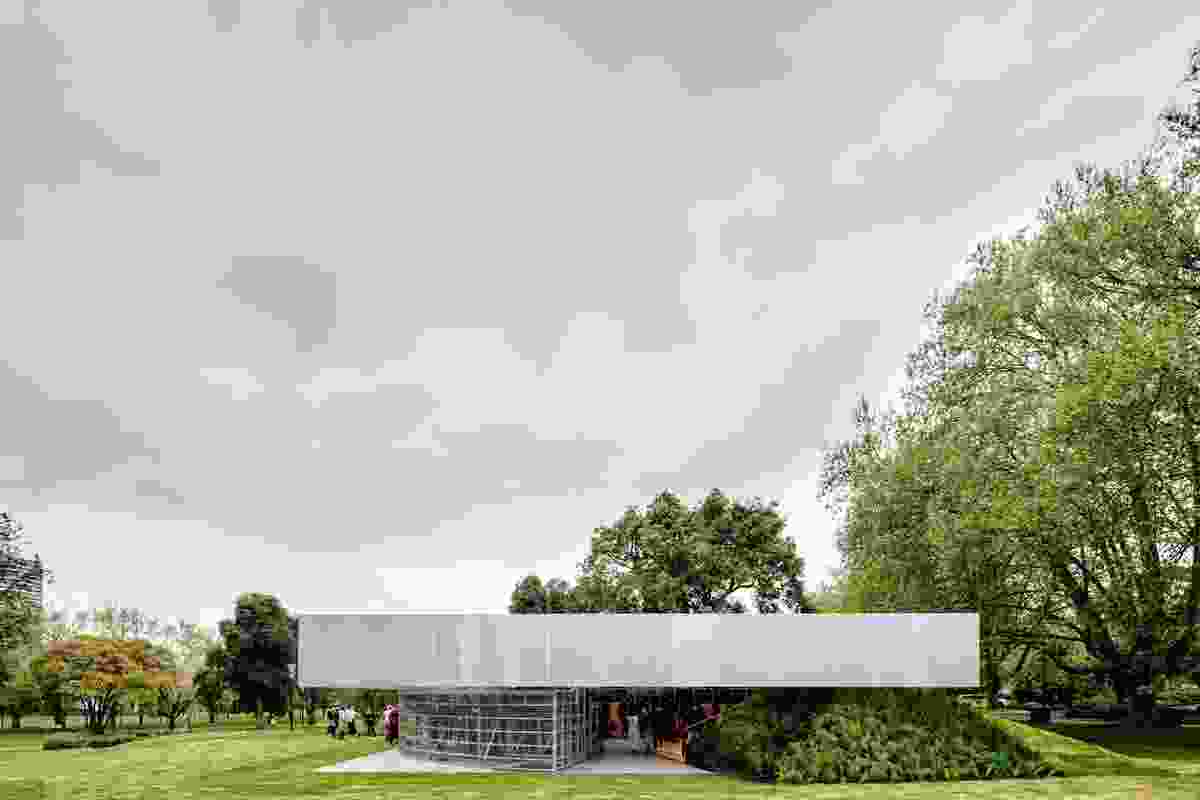 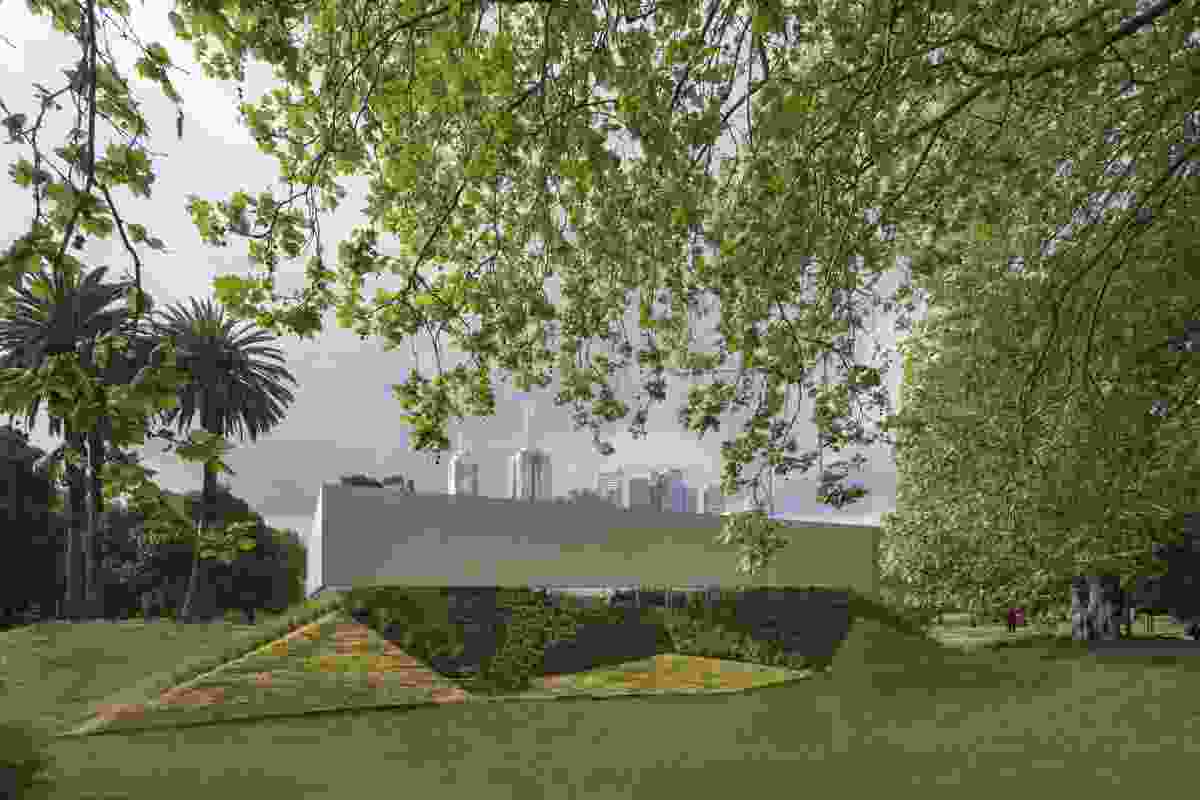 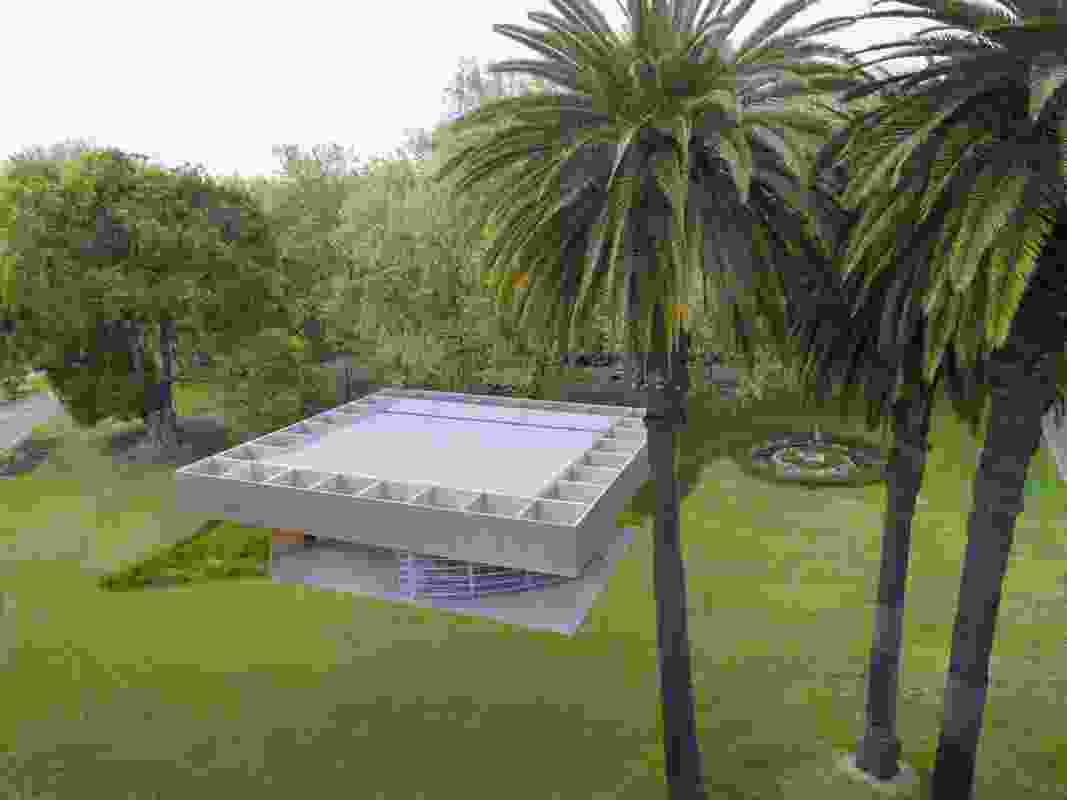 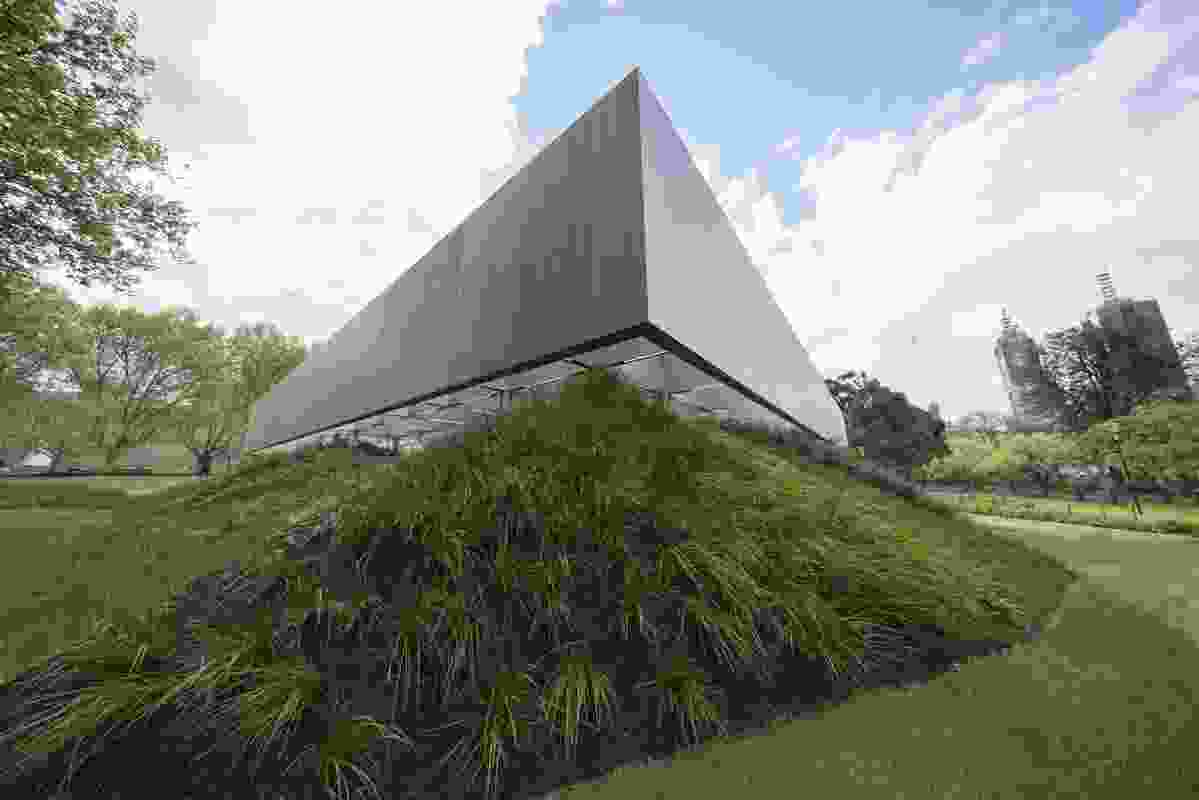 The 2017 MPavilion designed by Rem Koolhaas and David Gianotten is embedded in the garden by a landscaped berm. 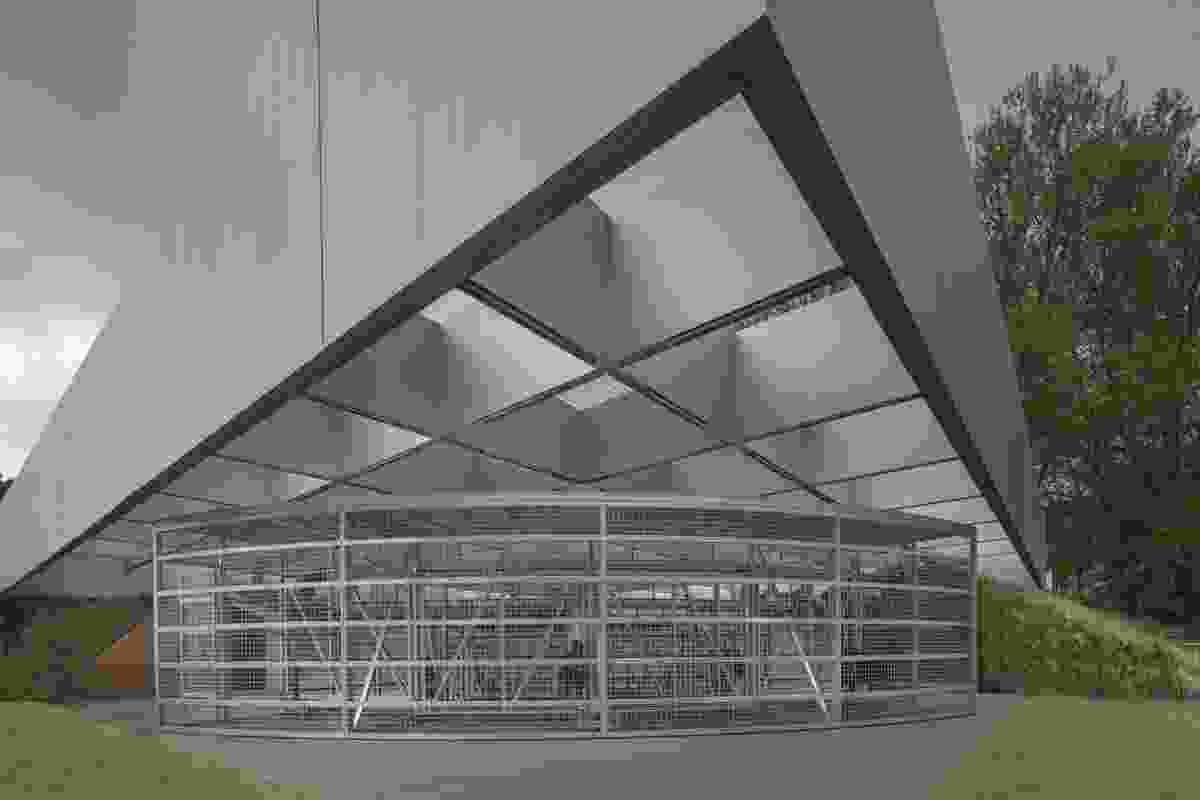 The 2017 MPavilion designed by Rem Koolhaas and David Gianotten includes a rotating grandstand. 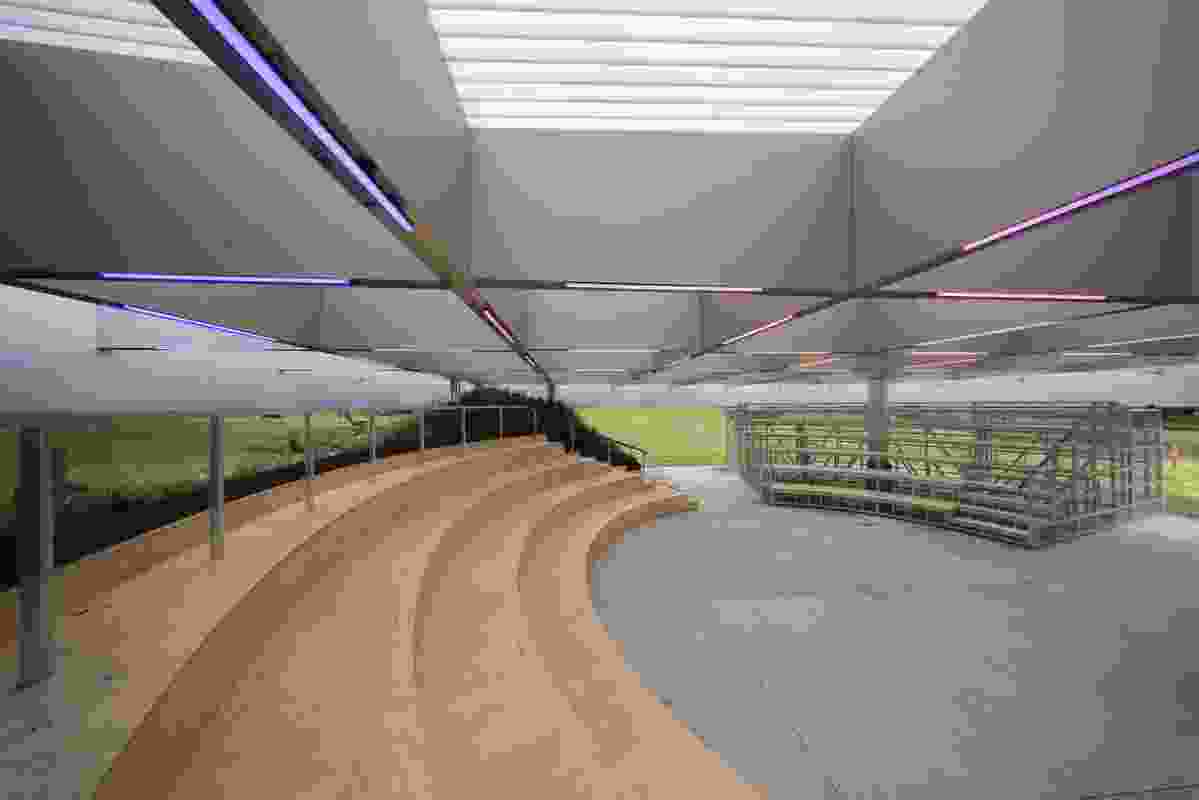 The fixed grandstand in The 2017 MPavilion designed by Rem Koolhaas and David Gianotten forms tiered seating. 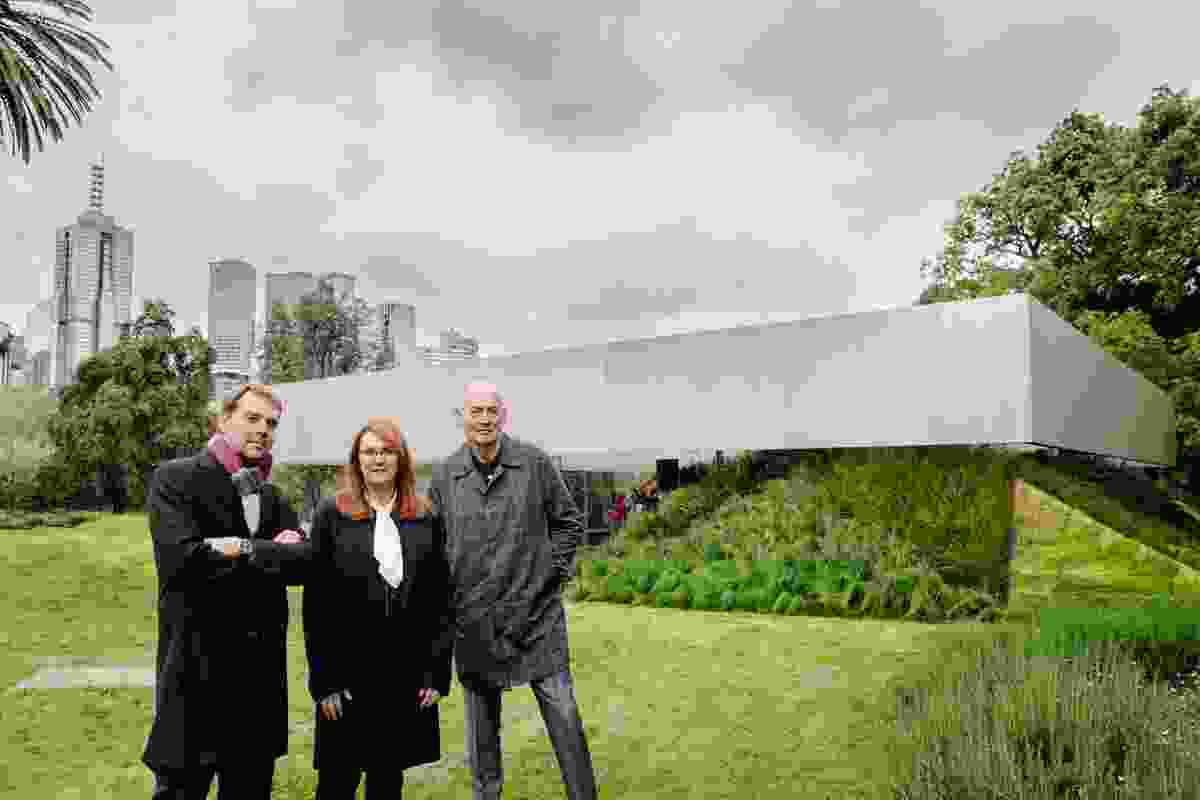