This renovation and addition to a Californian bungalow by Make Architecture offers its owners an active connection with the St Kilda community.

A large-scale timber screen gives a rhythm of pattern, texture and shadows to the rear facade of the extension.

Great architecture is more than beautiful form and details, more than skilful planning or even clever ideas writ large. Great architecture sheds light on how we live – in the community, the wider environment – in a more sustainable and long-term way. The problems of the contemporary city are not new: sprawling, with increasing density that comes with the risk of individual isolation and threatened community infrastructure. Melissa Bright, director of Make Architecture, is very aware of these challenges and works to address them across larger-scale competitions, as well as in the practice’s characteristically delightful and spatially economical homes. Local House, created for a small family in St Kilda, is an excellent example.

The creation of great architecture is helped by good clients and Local House was no exception. The clients met with Make Architecture with the desire to renovate and add to their existing Californian bungalow and make an active connection with the community. They wanted the design to draw on their love of cafes and local, social spaces rather than more typical architectural examples. The clients also wanted a home that they could share with their friends, family and the local community. The strategy was to keep the existing bungalow, tidy up the front two bedrooms and then add a new kitchen and a flexible dining/living space on the ground level, and a main bedroom with an ensuite upstairs. Out the back, bookending the backyard and connecting the home to the rear laneway, is a flexible studio/garage.

Melissa is a skilled architect who understands the potential of architecture from the scale of the brick – the material detail – right through to the overall siting strategy that makes the building work in its broader context. Here, the red brick of the original home is carried through to the exterior surfaces facing the backyard, while at the very rear, the bluestone of the laneway is continued into the flooring of the studio/garage building.

The architect’s interest in the diagram is evident in her handling of a series of continuous folding concrete elements that form a connecting and flexible base across the new work. Referred to as a type of garden pavilion, the new living space opens up to the backyard and has a conceptual and formal clarity typical of the firm. This central living space, with its double-height void, is configured by a concrete kitchen bench that becomes one of several “surfaces for living.” This then folds down to become built-in seating that continues to the threshold of the extended living room and garden. The concrete seats make a nook, a place to sit in the sun or at night, a spot for guests to drink cocktails. Outside, wrapping around a raised garden bed and making a connection to the rear garage/studio, extends another concrete seat running geometrically along the property’s northern edge. The concrete also rises in the kitchen to form an inside/outside fireplace. Intentionally durable and tough, these surfaces read more like those typical of a cafe or a warehouse than a home.

Looking back at the house from the garden, one of the most visually spectacular elements of the architecture is revealed: a large-scale timber screen that defines the western elevation of the home. This screen – with its musical rhythm of sliced timber pieces – is beautiful. It works to protect the main bedroom from the sun while also conforming to regulations relating to the transparency of screens overlooking neighbouring backyards. Recalling something of Kengo Kuma’s timber detailing, and Le Corbusier’s La Tourette Monastery or the wonderful abstractions of the Chandigarh Palace of Assembly building and Unite d’Habitation brise soleils, this element exemplifies Melissa’s fascination with pattern, texture and the qualitative potential of thresholds.

Defining the rear edge of the garden is the studio/garage. Intended as an entertaining space, teenage retreat, home office, studio and garage, the detailing of this building is characterized by elegant robustness and flexibility. Large sliding glass doors suggest the programmatic ambiguity, and the edge of the building that meets the laneway can be completely opened up. The concrete base and surfaces continue forming robust desks, a workbench and seats for spontaneous conversations and drop-ins by neighbours. The home’s versatility and openness also allow for a certain visual generosity that connects the house to its local community. From the laneway, you can view directly through this studio space into the garden and living spaces of the house proper. And these clients enjoy those moments of openness and direct connection to the context and passers-by rather than the typical closed-off, self-contained domesticity. This move, in turn, activates the laneway and works as an alternative model for public/private relations in the suburbs. The potential is for active and shared laneways, places for congregation, play and social exchange as well as a pathway through to shopping and cafe precincts. And in a final gesture of contextual reciprocity, the rear concrete elements of the main house and studio have been made with formwork constructed from the old fence palings – a common material made a little more special with moments of subtle texture and pattern.

The great success of this project is found in the way connection is made between the new work and the existing structure. This is achieved through the various formal riffs and material continuities, the flexible planning, the enabling of a social and visual connectivity through the house and finally the delight – not to be underestimated – found in the spatial and formal manoeuvres of this addition.

Local House by Make Architecture received commendations for House in a Heritage Context and Outdoor in 2015 Houses Awards. 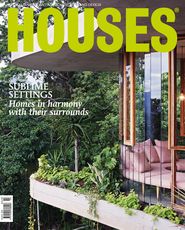 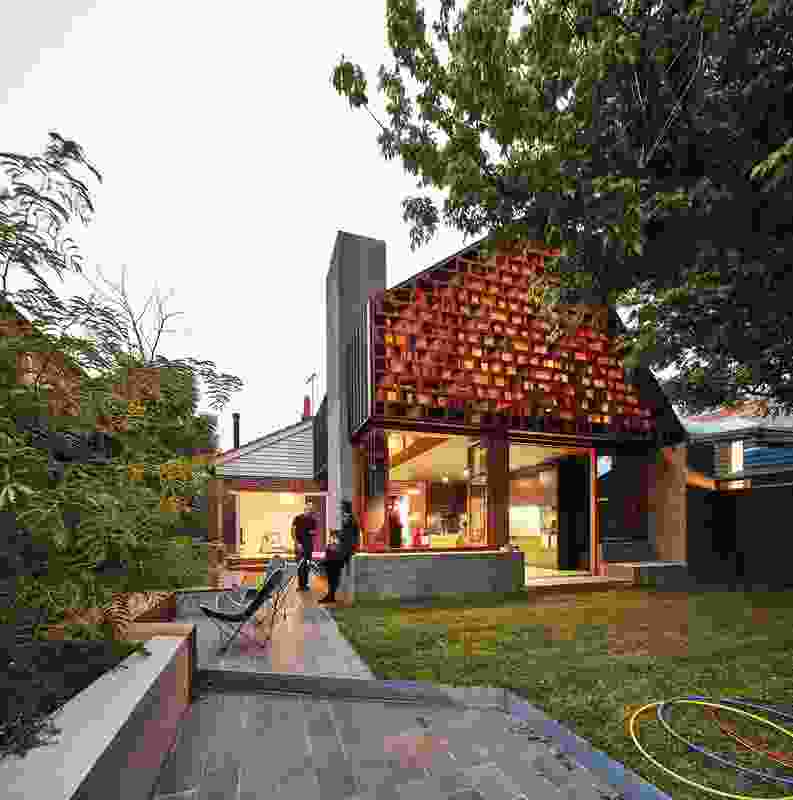 A large-scale timber screen gives a rhythm of pattern, texture and shadows to the rear facade of the extension. 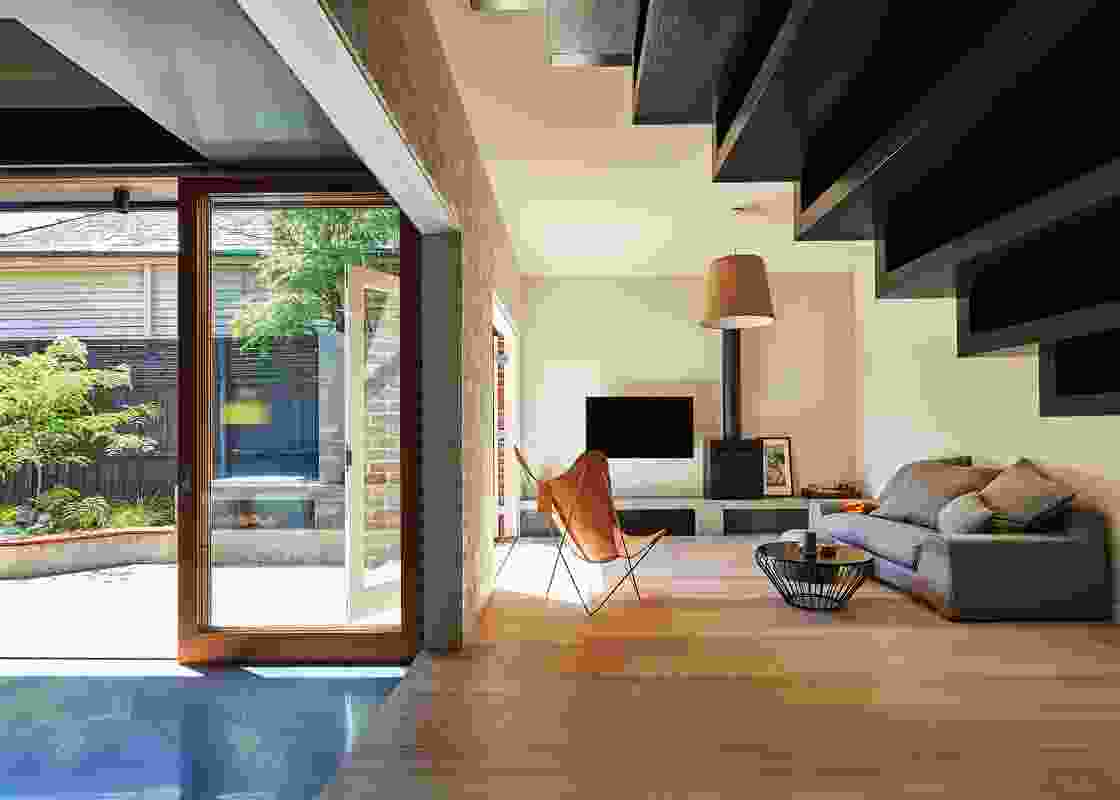 The edge of the existing house has been retained, with a red brick wall running through the living spaces. 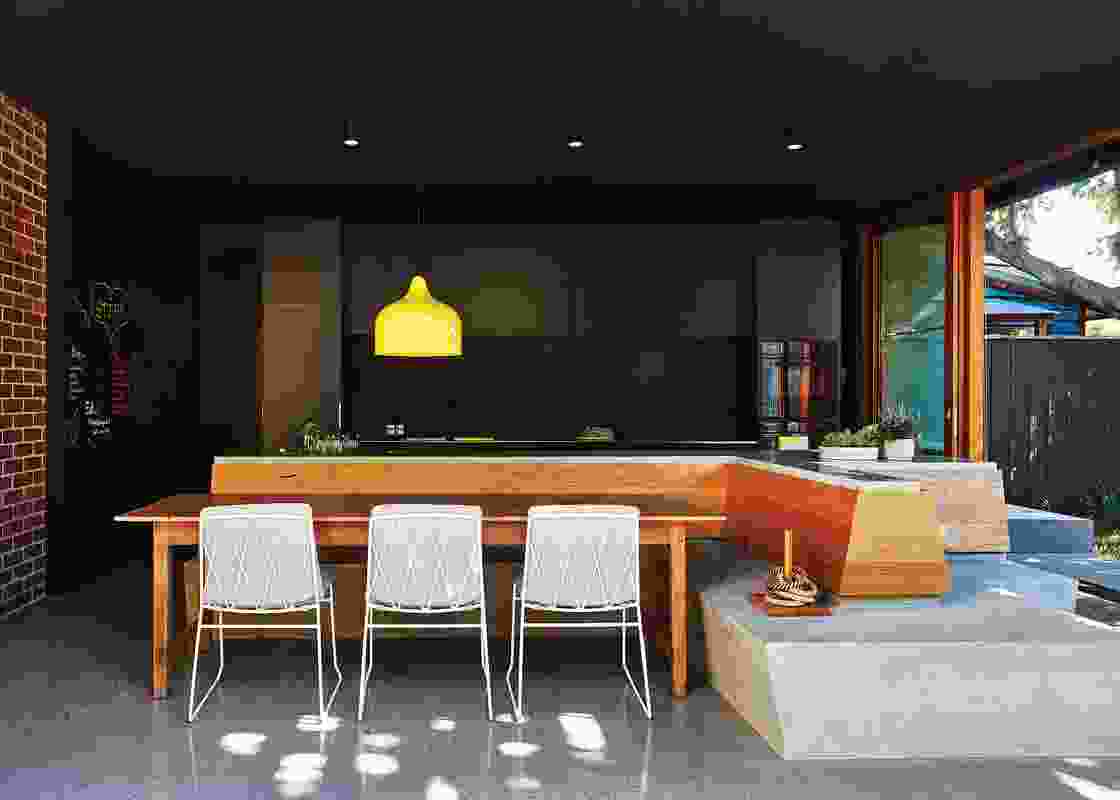 A concrete kitchen bench folds down to become built-in seating that continues to the threshold of the extended living room and garden. 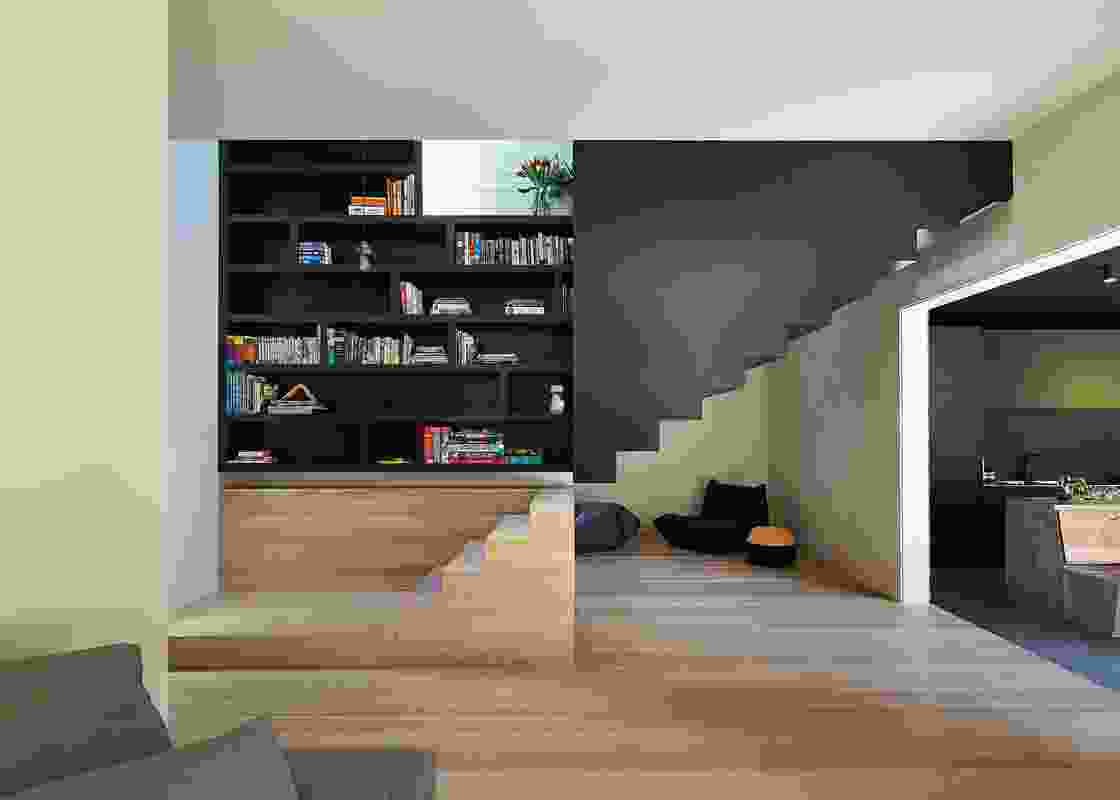 The stair appears to hang from above, and the stair treads wrap up the wall to create an inbuilt joinery unit. 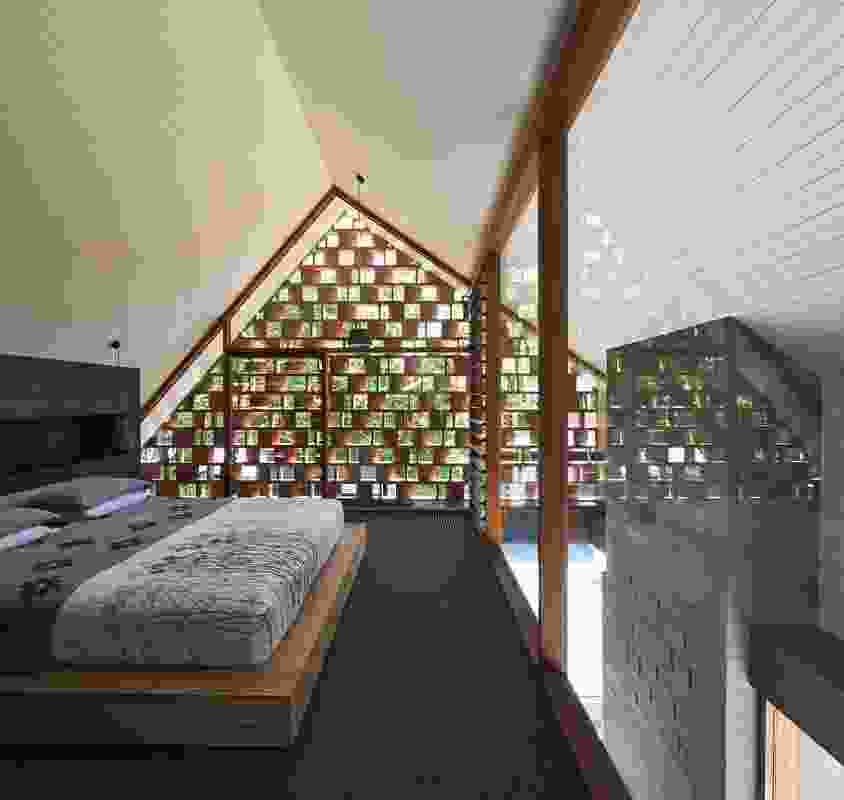 The timber screen protects the main bedroom from the sun while also conforming to regulations regarding to neighbour privacy. 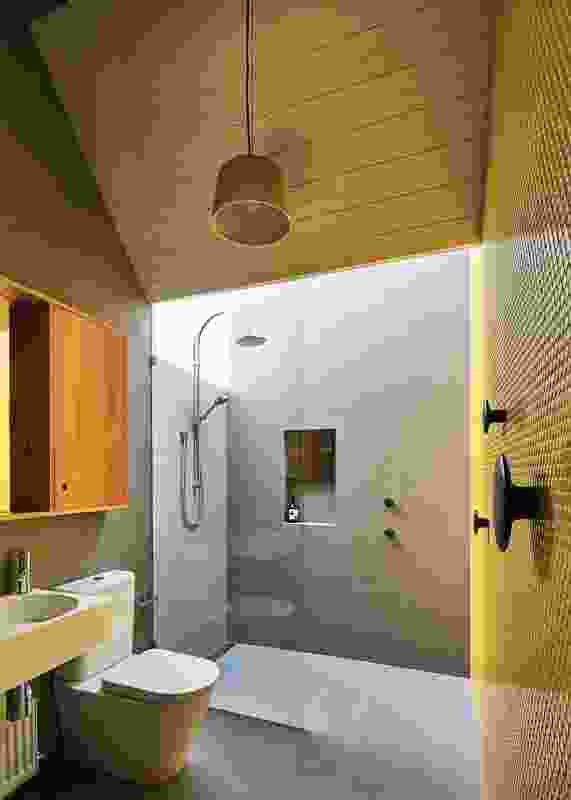 The main ensuite features a pop-up skylight over the shower for access to natural light in a private space. 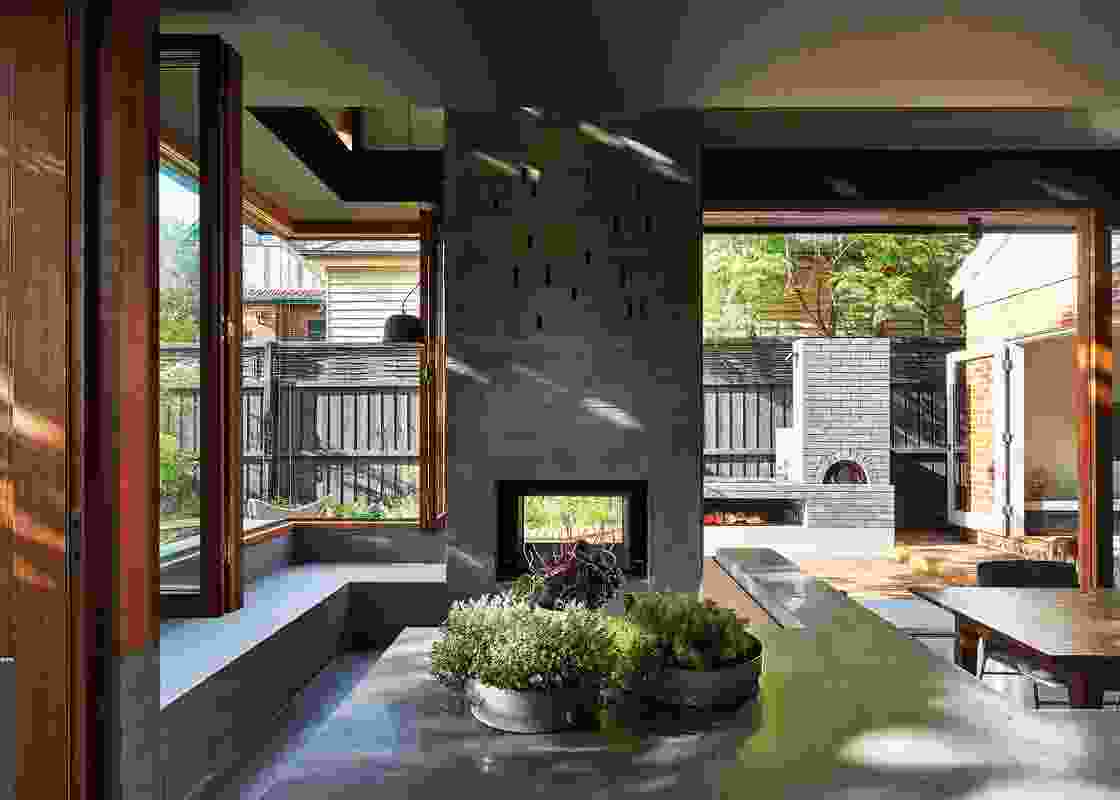 Intentionally durable and tough, the surfaces of the kitchen and dining areas read like those typical of a cafe or warehouse. 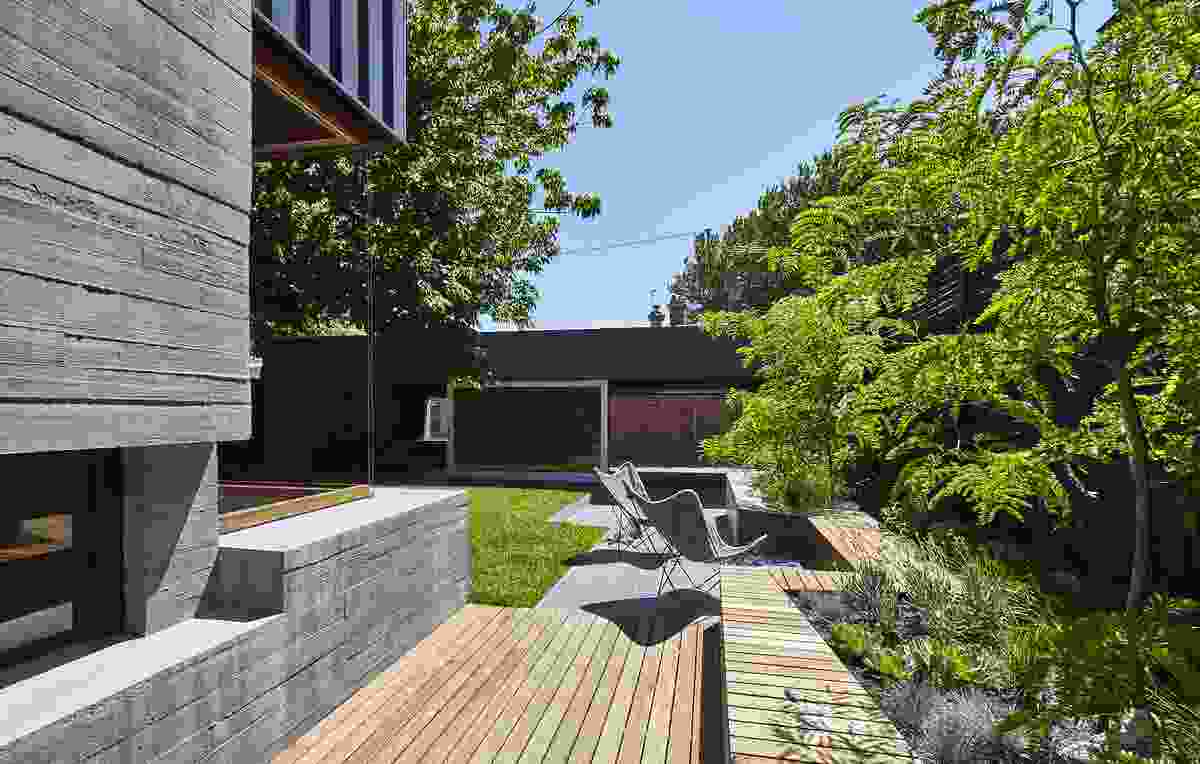 An inbuilt concrete seat wraps around a raised garden bed and extends to make a connection with the rear garage/studio. 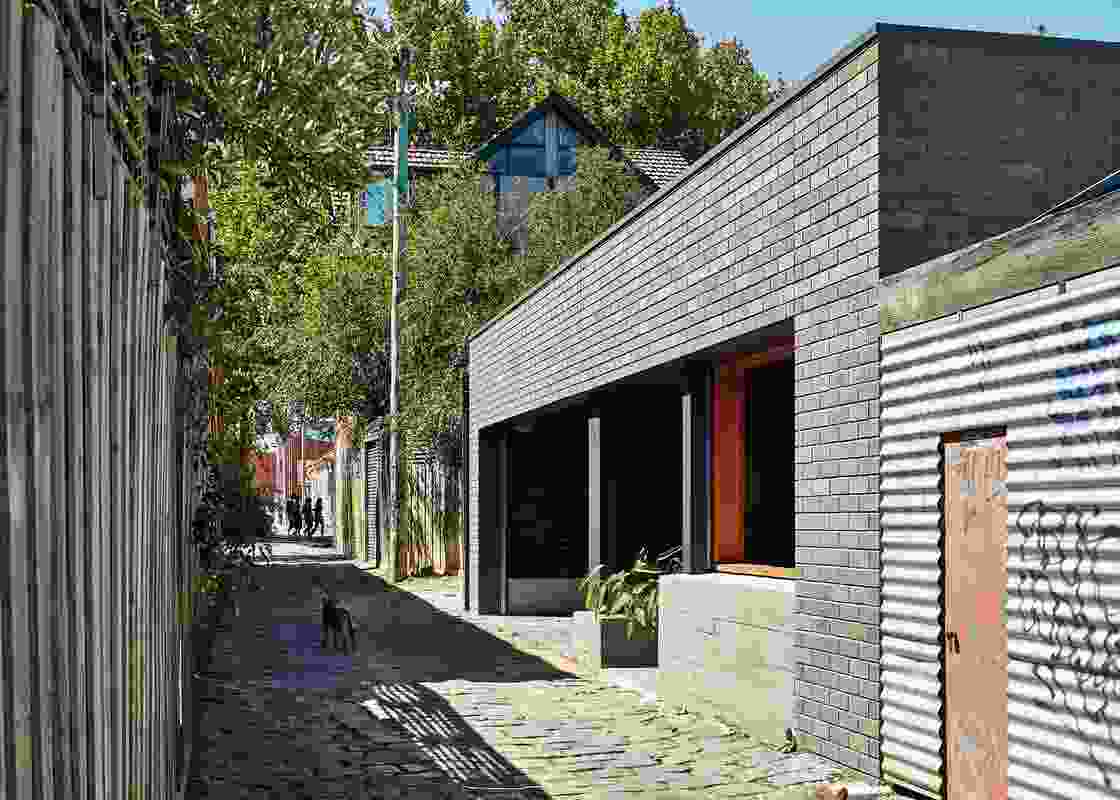 The garage/studio makes a direct connection to the context and passers-by in the laneway. 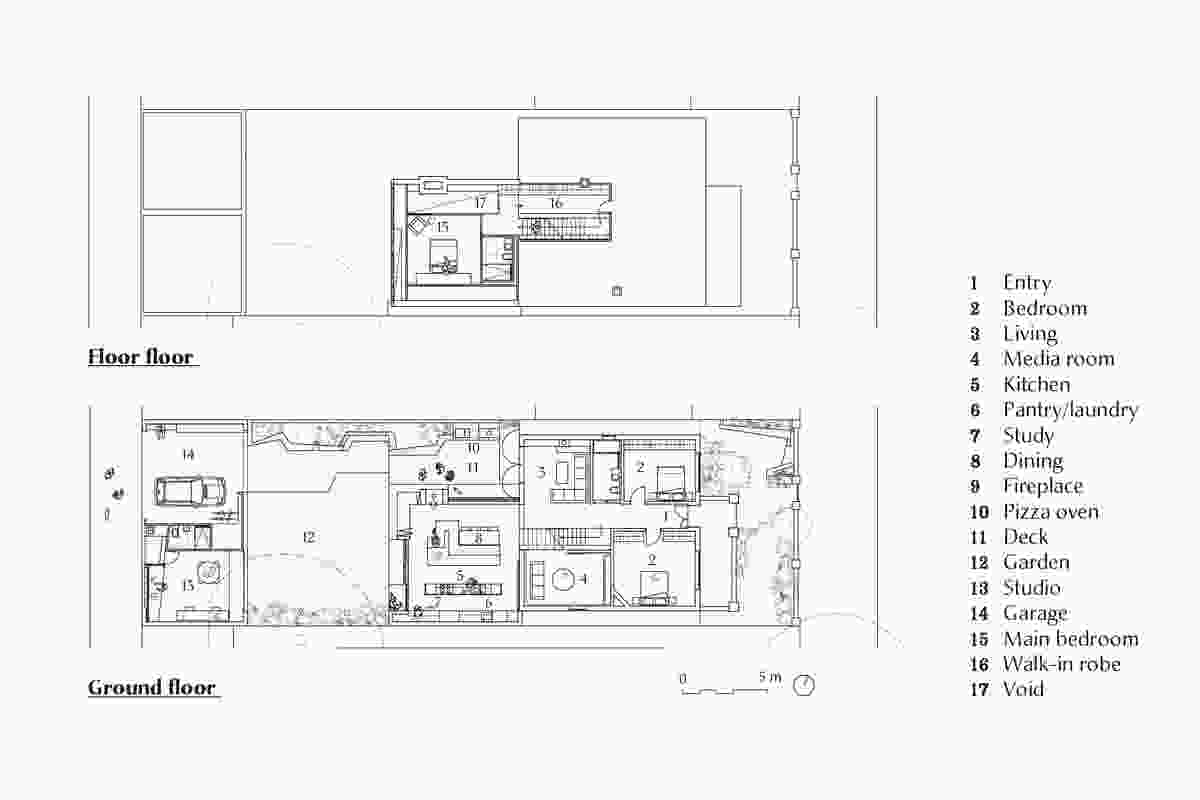 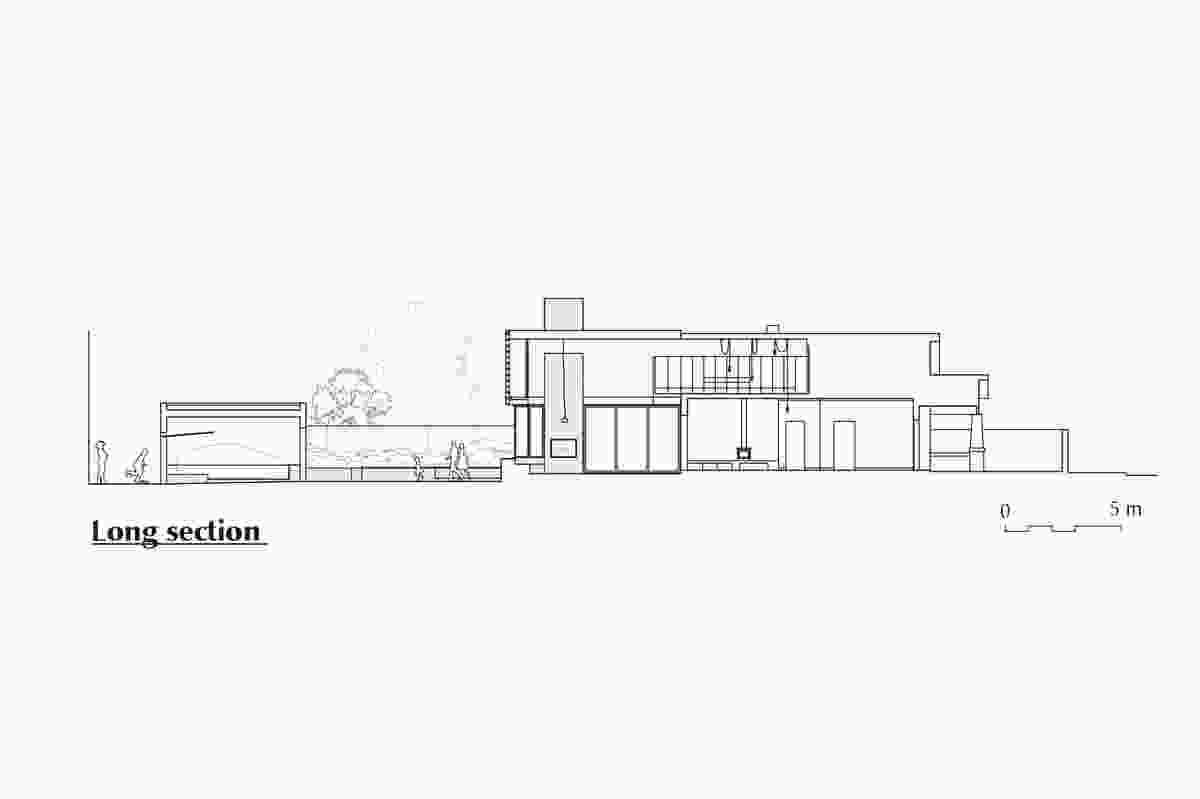 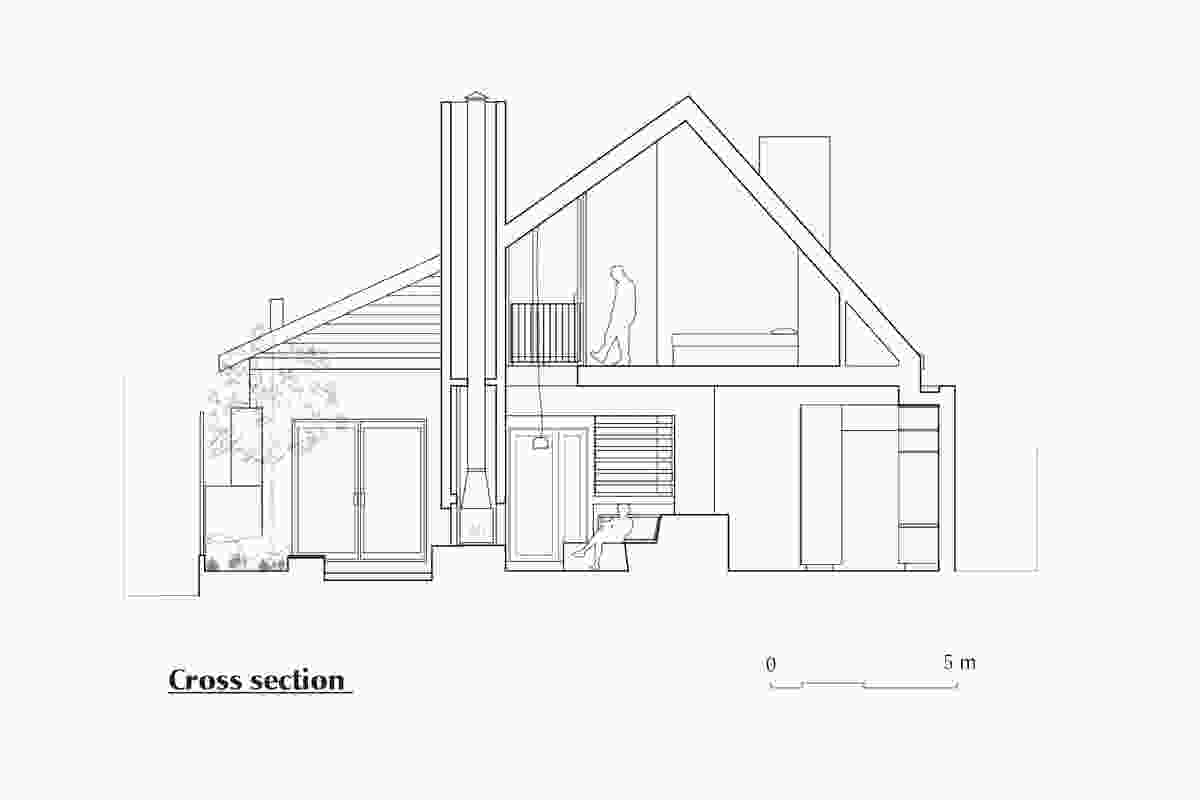 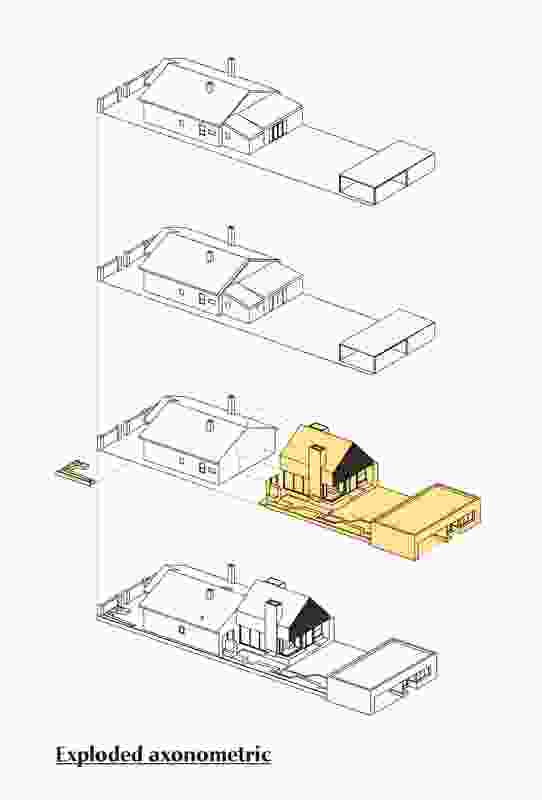