Sunk into the hillside, Shed 1 will become surrounded by the forest as it matures.

Lune de Sang is quite a foreboding title for a paradise in the hills behind Byron Bay. The property was named on the eve of its official purchase, the eve of a lunar eclipse, under the glow of a blood moon. Considered a sign of bad luck, this omen was approached head-on and appears to have brought good fortune.

The path of history on the site has recently been altered. Initially rainforest, then heavily logged to accommodate cattle grazing, Lune de Sang is currently in its sixth stage of hardwood forest planting for selective harvest. The planting project is rather daunting considering that the life span of a tree is between fifty and three hundred years. As a counterpoint to the ephemeral nature of the regenerating forest, continually changing with the growth of the trees, John Choi of CHROFI was asked to create two permanent structures, substantial and solid.

Upon entering the site, the visitor is guided by a pioneer rock wall along a path towards Shed 2 and deeper into the property to Shed 1. The word “shed” is affectionately applied to a structure that performs the function of a shed but is not remotely “shed-like” in appearance. On approach to Shed 1, the pioneer wall is replicated with stones sourced entirely from the property, which stirred local rumour of proposed mining on site. The wall, a reference to the client’s admiration for Andy Goldsworthy, rises gradually from the road as it slowly curves in plan towards the shed and provides a solid rear wall to the structure before fading off into the hillside.

Part of Shed 1’s function is embedded within the sloping topography. In situ concrete beams rest on the wall and spring out to form a right angle to provide the structure of the shed. The simplicity of the idea is astounding. The space is intended for work on machinery, the in situ concrete providing a substantial floor area within which large pieces of machinery can be manipulated. However, the detailing and juxtaposition of raw and refined materials also lend the space an elegance in which a black tie cocktail party would not seem out of place. The solidity of the concrete structural ribs is divided by glazing to let a play of light into the space, a multitude of patterns on the concrete floor.

The parallax of the concrete and glazing on the vertical edge of Shed 1 creates a variety of frames for the view, giving the space a film-like quality. Choi points out that the building, currently surrounded by an early stage of planting and allowing a vista across the rolling hills, has been designed with the expectation that the forest will grow up around it. It is anticipated that the forest will close in the view and provide a glade around the structure. The axial view, evident on approach and guided by the continuity of the rock wall through the space, opens out to an aged fig tree and will be accentuated over time with the growth of the surrounding forest. Sunk into the hillside, Shed 1 has amazing acoustics and a consequent sense of calmness.

Glazing on the north and south edges is fully operable and the methodical hum of machinery accompanies the opening of the structure, heightened by the bunker-like quality of the rock wall. Inside, the thermal mass of the hillside provides a stable temperature approximately three degrees cooler/warmer than the outside temperature. Tallowwood screens hide the shelving and workbenches that divide the open space from the utility area embedded in the hillside. The beauty of raw materials is evident in the concrete sinks that were poured in situ, juxtaposed with elegant detailing in timber.

It was important to the client that the shed did not draw your eye from the landscape, but forged a strong relationship with it. Shed 1 forms part of the topography, sinking into the earth in a way that will endure the test of time. Scale was extremely important. In such an enormous landscape, anything of a domestic scale would have appeared out of place.

Shed 2, started thirteen months after Shed 1, is encountered first if you follow the intended route through the property. Intended for the storage of machinery, it has similarities to Shed 1, although it seems to be reversed. On approach it appears as a timber box providing a solid element below an immense cantilever of eleven metres of twenty-metre concrete beams. Close up, the solid timber box dissolves in a feat that could be likened to large-scale origami. A pin joint, which emphasizes the cantilever of the side wall, rotates out and the longitudinal walls rotate upwards to completely open the space.

It appears to be the inverse of Shed 1. While Shed 1 contains air and light, Shed 2 has light shooting upward from within the concrete drain at its perimeter to provide an ethereal curtain in the evening air.

The external expression is completely mute, featureless and utilitarian, with the use of caging along the back wall between a rock retaining wall and the timber solid. It appears to be the inverse of Shed 1. Where there was openness and light there is now solidity. Sitting against the embankment, this structure appears supremely anchored. While Shed 1 contains air and light, Shed 2 has light shooting upward from within the concrete drain at its perimeter to provide an ethereal curtain in the evening air.

With an extended family of sixteen grandchildren, the clients have planned a series of further pavilions. They want to create a heart to the property where the family can gather as a group, with satellite structures scattered around the immense acreage for privacy. Positioned deep within an uncontrollable landscape of vegetation, the Lune de Sang sheds have a solid, timeless presence that will be felt for many years to come.

Sunk into the hillside, Shed 1 will become surrounded by the forest as it matures. 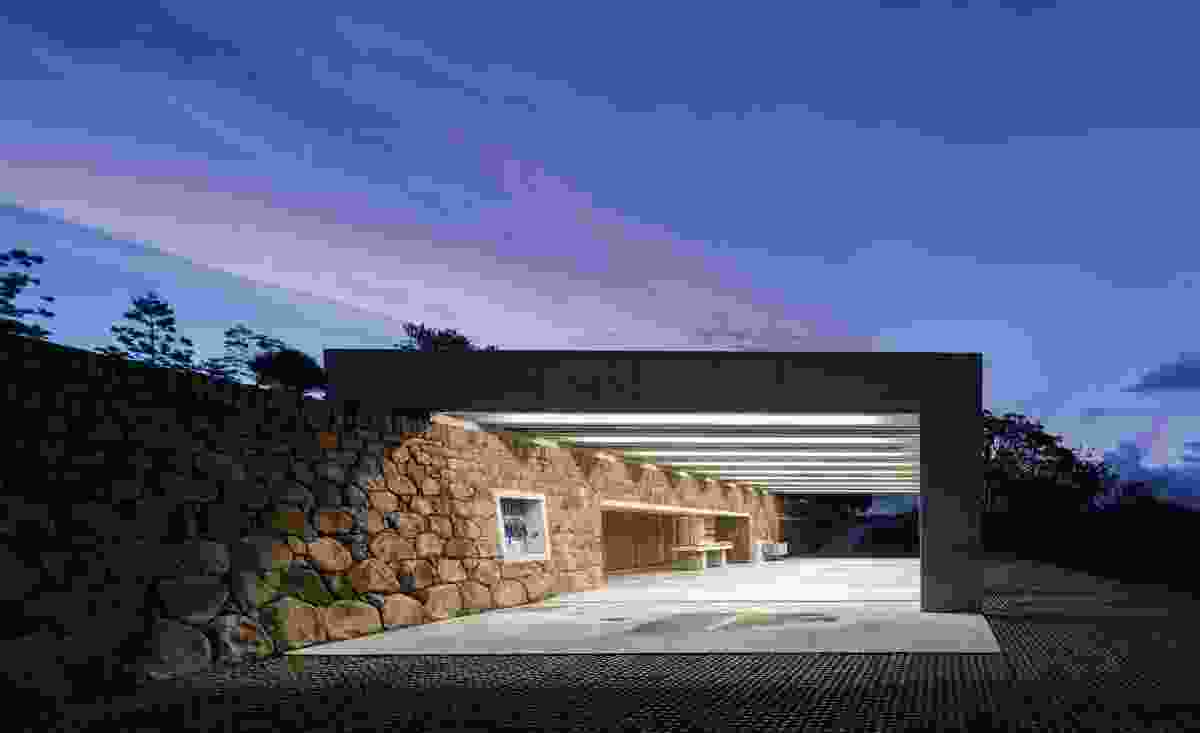 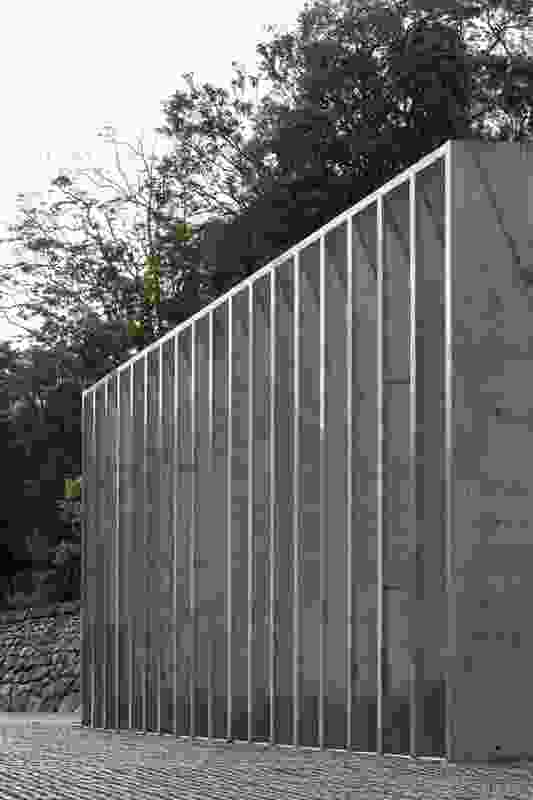 Solid concrete beams define the ceiling and facade of Shed 1, lending it a robust aesthetic. 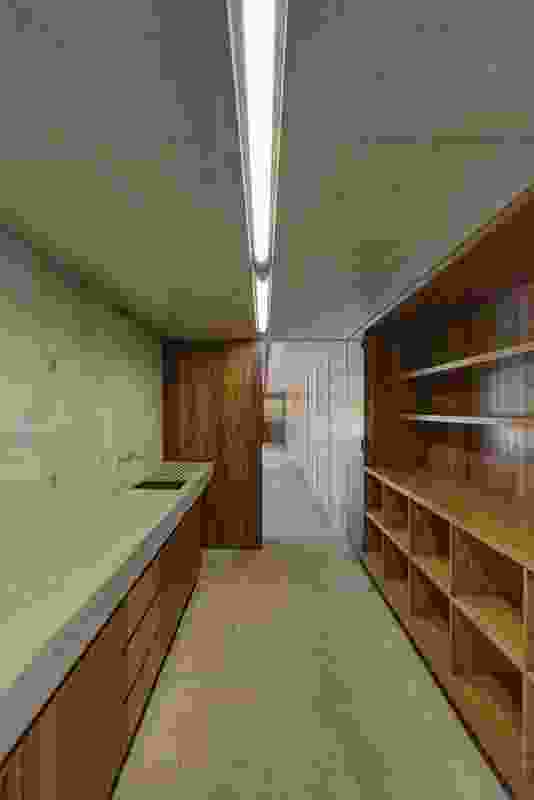 Tallowwood cabinetry and a concrete sink, poured in situ, in the utility area. 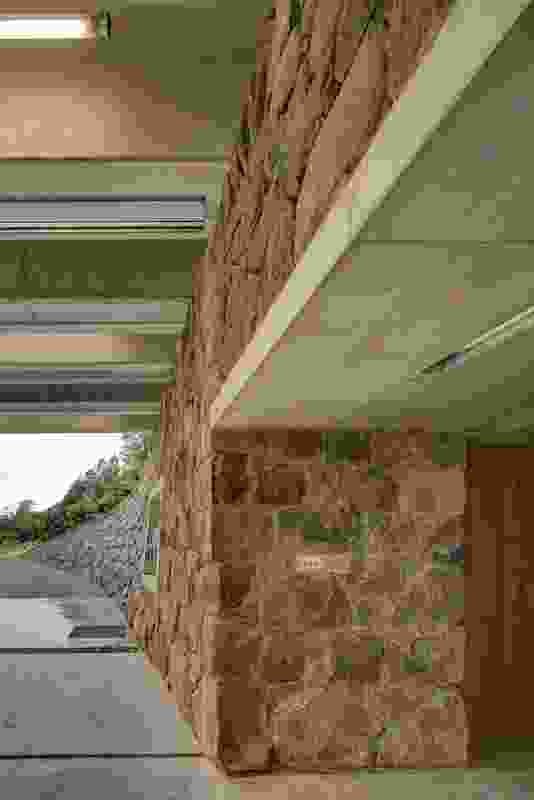 A stone wall, constructed from stones found on site, rises from the road and curves to form the rear wall. 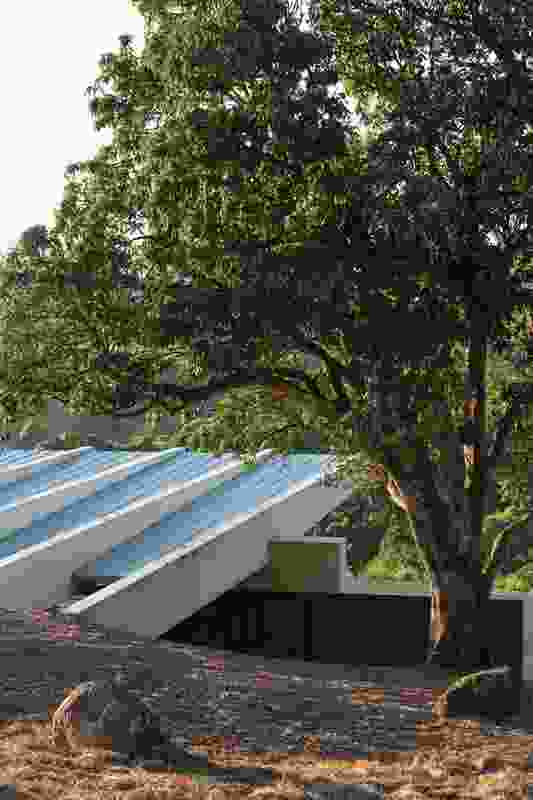 Shed 2’s vast roof is embedded into the embankment, allowing it to cantilever by eleven metres. 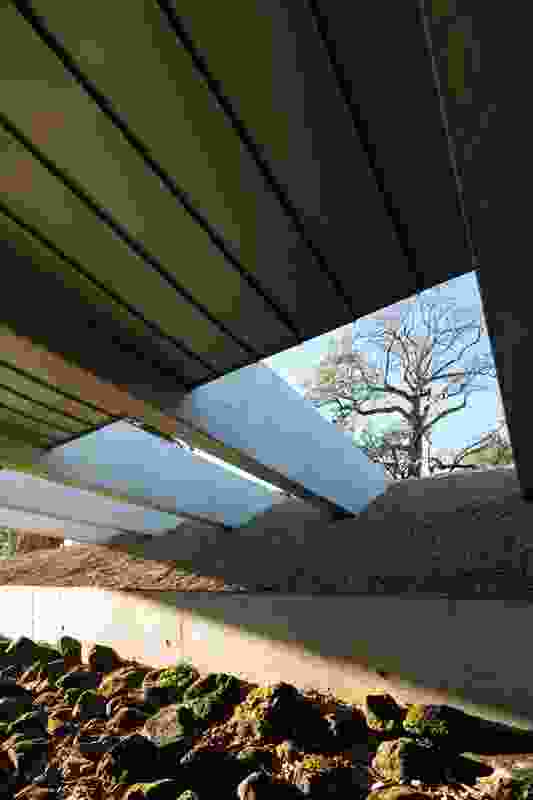 Shed 2’s vast roof is embedded into the embankment, and cantilevered eleven metres. 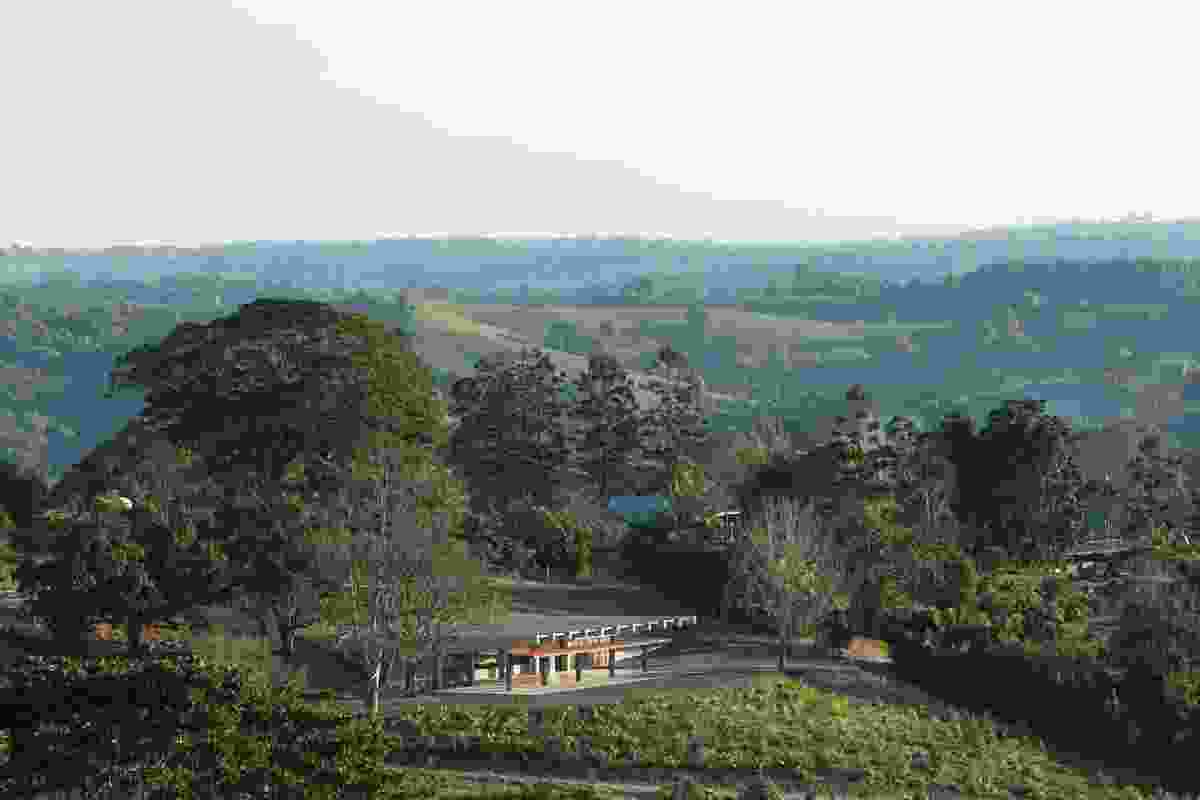 Shed 2 set into the landscape at Lune de Sang. 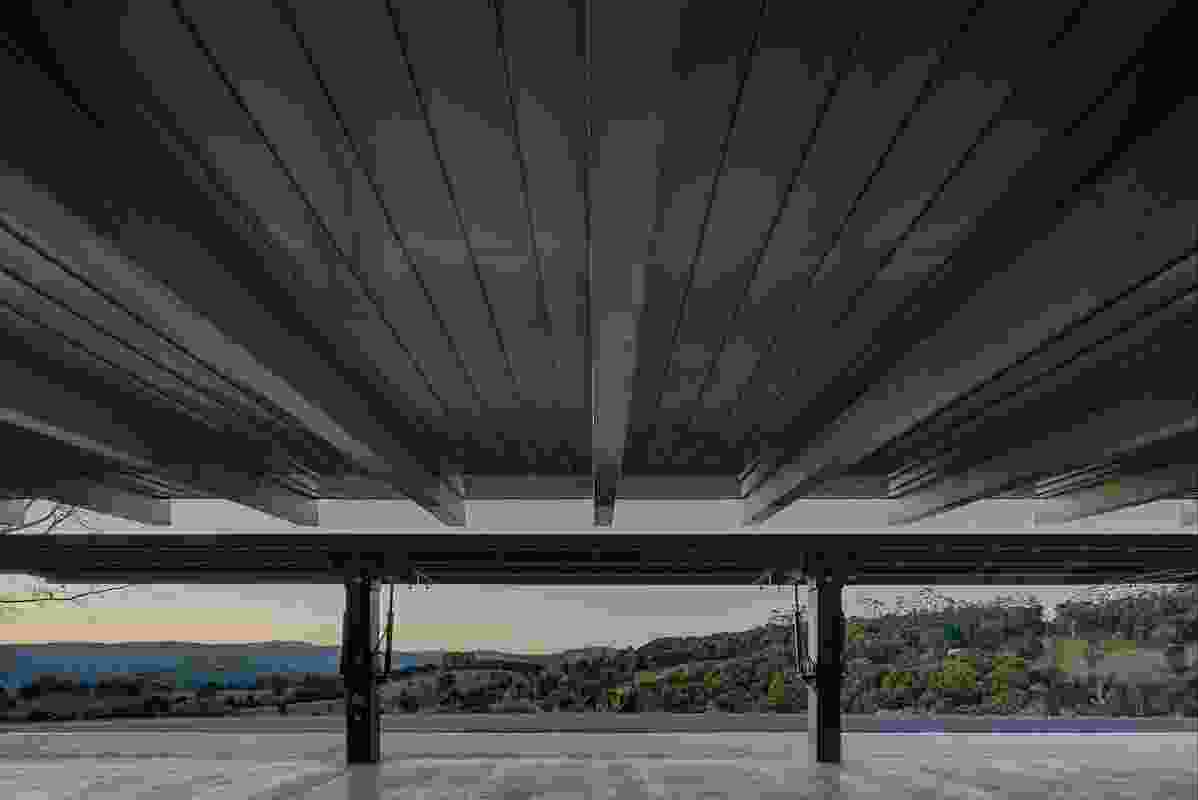 The timber doors of Shed 2 rotate upwards to reveal the landscape.