The 2015 Australian Open launches with a revamped venue by NH Architecture and Populous.

The beginning of the 2015 Australian Open has brought with it the opening of a new addition to Melbourne’s sports precinct, the Margaret Court Arena designed by NH Architecture and Populous in joint venture.

A $183 million revamp of the old Show Court One, the new Margaret Court Arena boasts an additional 1500 seats and a retractable roof to protect from Melbourne’s notoriously inclement weather.

Much has been made of the roof, which is purportedly the fastest operating in the world. Certainly, compared to the 30-minute closing time for the roof of Rod Laver Arena, which Margaret Court Arena adjoins, it is whip-fast at five minutes. As Hamish Lyon, principal of NH Architecture, argues though, the re-designed arena is about more than just fancy engineering and extra seats, but an opportunity to create a uniquely Melbourne experience for visitors.

As Lyon says, “The one thing none of the buildings have done down there, in the course of the past 25 years, is made much of the great asset of being so close to the city and so close to the river and its parks.” This building, Lyon points out, set out to rectify that oversight from the very start. “Let’s not think about it as some sort of generic, Brutus Maximus sports building, let’s think of it as being another one of Melbourne’s iconic river buildings.”

Works include the installation of a new façade and a fully enclosed foyer and concourse area that enjoys spectacular outlooks not just to nearby tennis courts and sporting facilities, but also to the river, parks and the city skyline beyond.

As Lyon explains, beyond the experience for those people lucky enough to visit, the arena has been designed with a global audience in mind – the many millions of people whose experience of the building will be mediated by a screen, be it on a mobile phone or television.

“‘I think they get about 690,000 people visit the Australian Open every year, but they get hundreds of millions of people access the Australian Open digitally and the first image they always get is the television chopper view of the precinct,” says Lyon. “Because Margaret Court Arena is the first building in the precinct that’s physically attached to another building, Rod Laver Arena, we had to do something that was complementary but contrasting to the Rod Laver Arena roof, so that when people saw that image, they people could work out which was which in a flash.”

“The language of a lot of sports architecture is expressed structure, big trusses – it’s all really kind of macho, engineering stuff,” Lyons continues. “So we took the opposite approach – we said if you look at all the current things that people think of as being designed, like iPhones and laptops, it’s all about how slim, how thin, how fine you could make it, rather than a sort of ‘big structure’”

The coppery, “pleated” roof that resulted has been described as reminiscent of the pitched terracotta roofs of Melbourne’s suburban housing estates, but the design team drew on slightly different inspirations. The colour and shape of the roof is intended to reflect some elements of Melbourne’s architecture, though – the more traditional materials associated with the buildings along the Yarra River, particularly sandstone, zinc and copper.

The facets and pleats in the copper colour lend the roof a kind of iridescence and it’s said to change colour throughout the day. Perhaps more importantly, though, the folding also allows the roof to extend right out and address one of the more notorious qualities of a physical visit to the Australian Open.

“The long consistent criticism of all patrons that go to the Australian Open is that there is nowhere shaded to shelter in the 40 degree Summer heat. We thought of the roof as being able to swoop down and produce these large sheltered areas as free public space, which there are now.” As Lyon is quick to point out, these swooping canopies also make for great shelter in Melbourne’s other three seasons, for the concert-goers and the like who will visit the arena in the 50 weeks of the year that aren’t dominated by tennis. 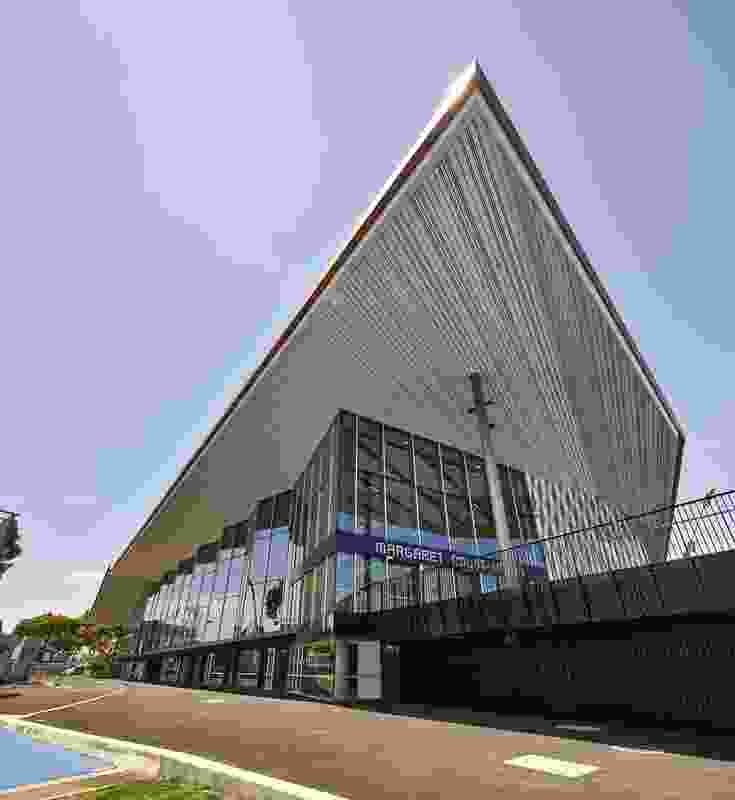 The oversized canopy of the roof provides plenty of protection from Melbourne’s inclement weather. 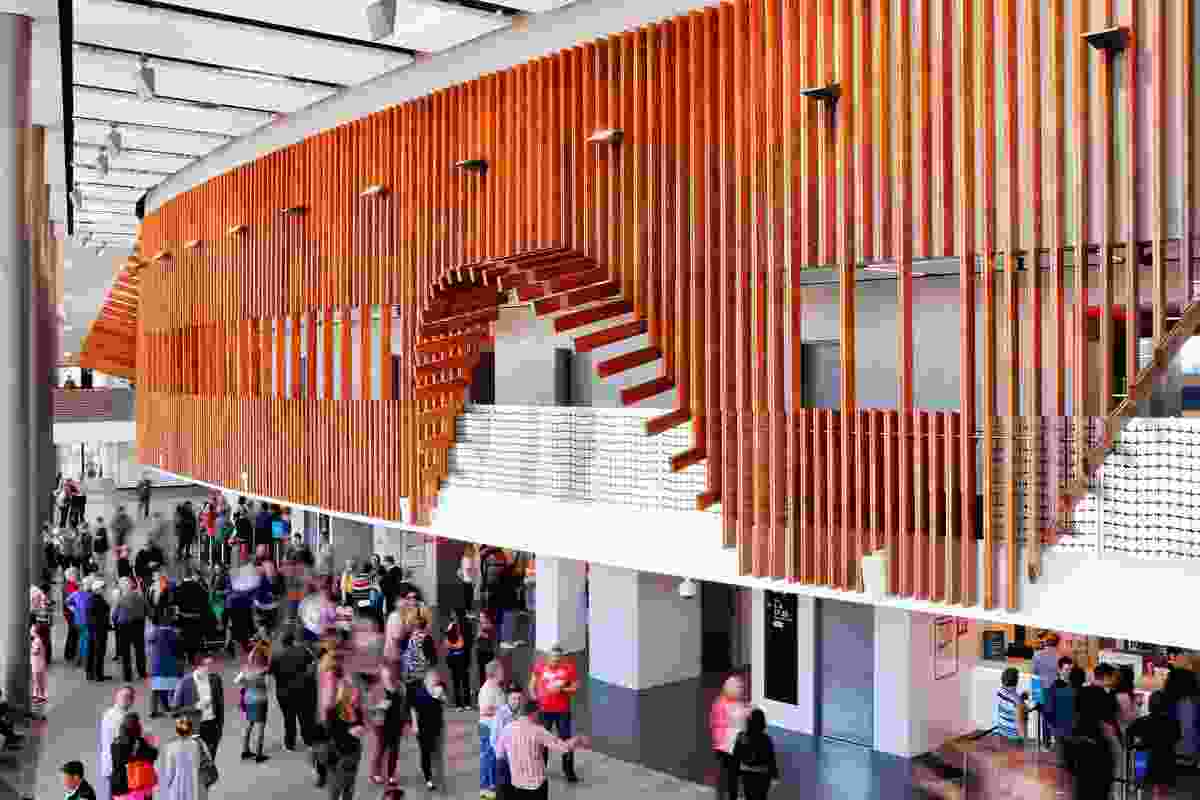 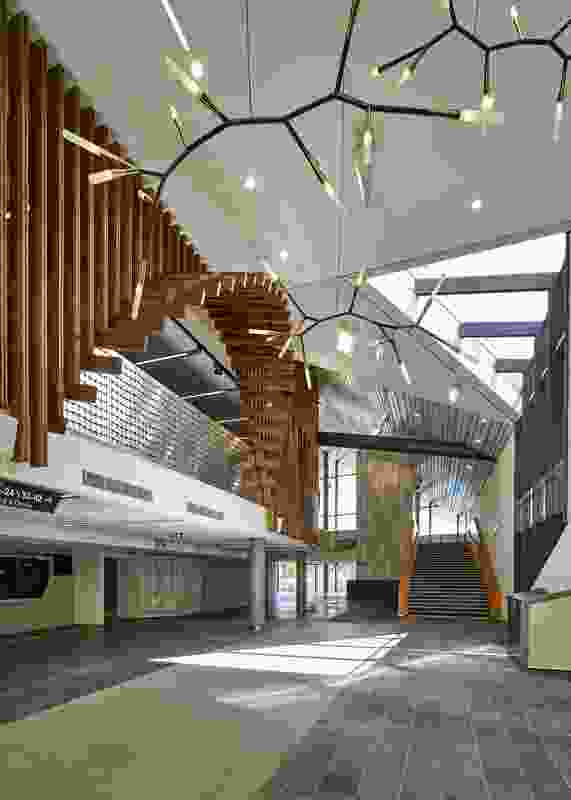 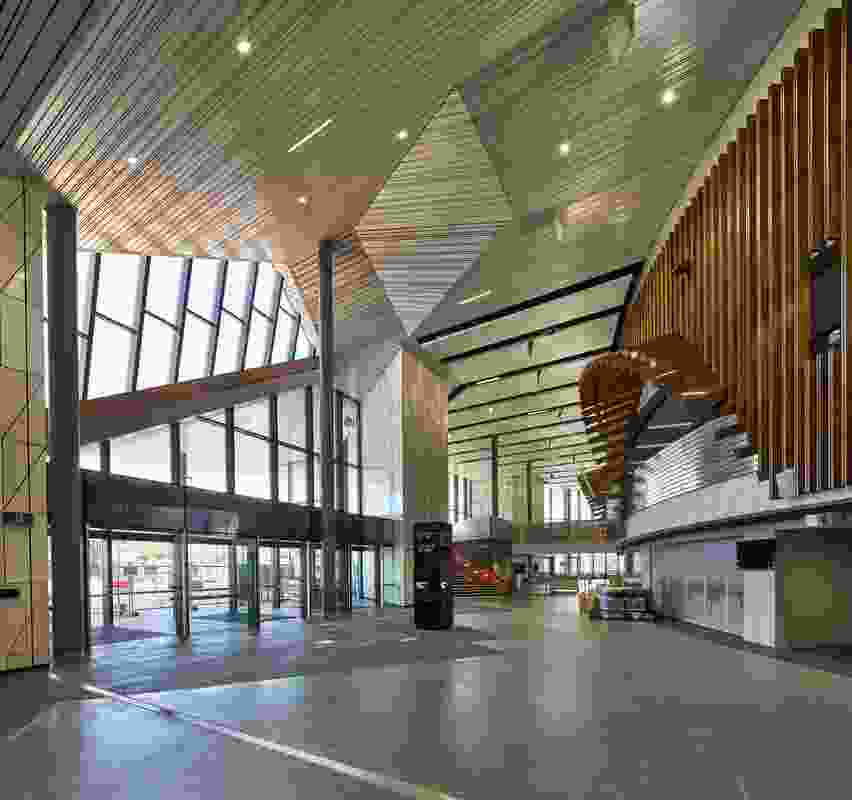 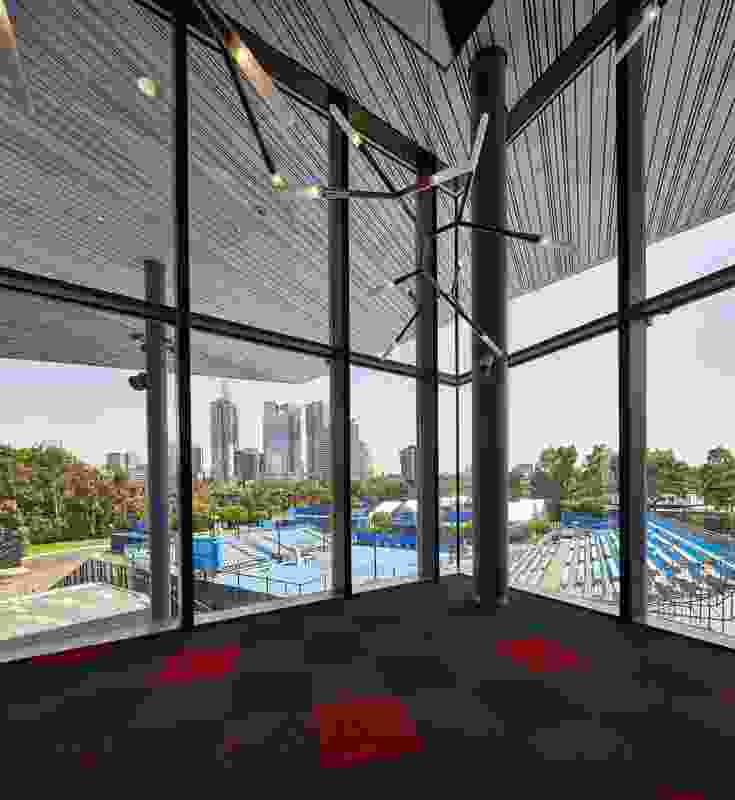 Interior of Margaret Court Arena enjoys views of the city. 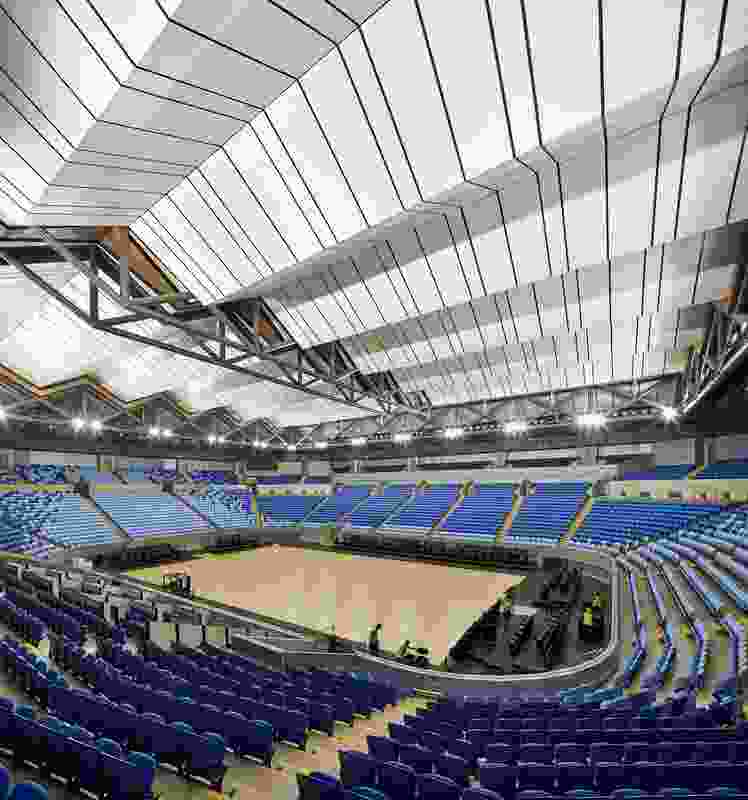 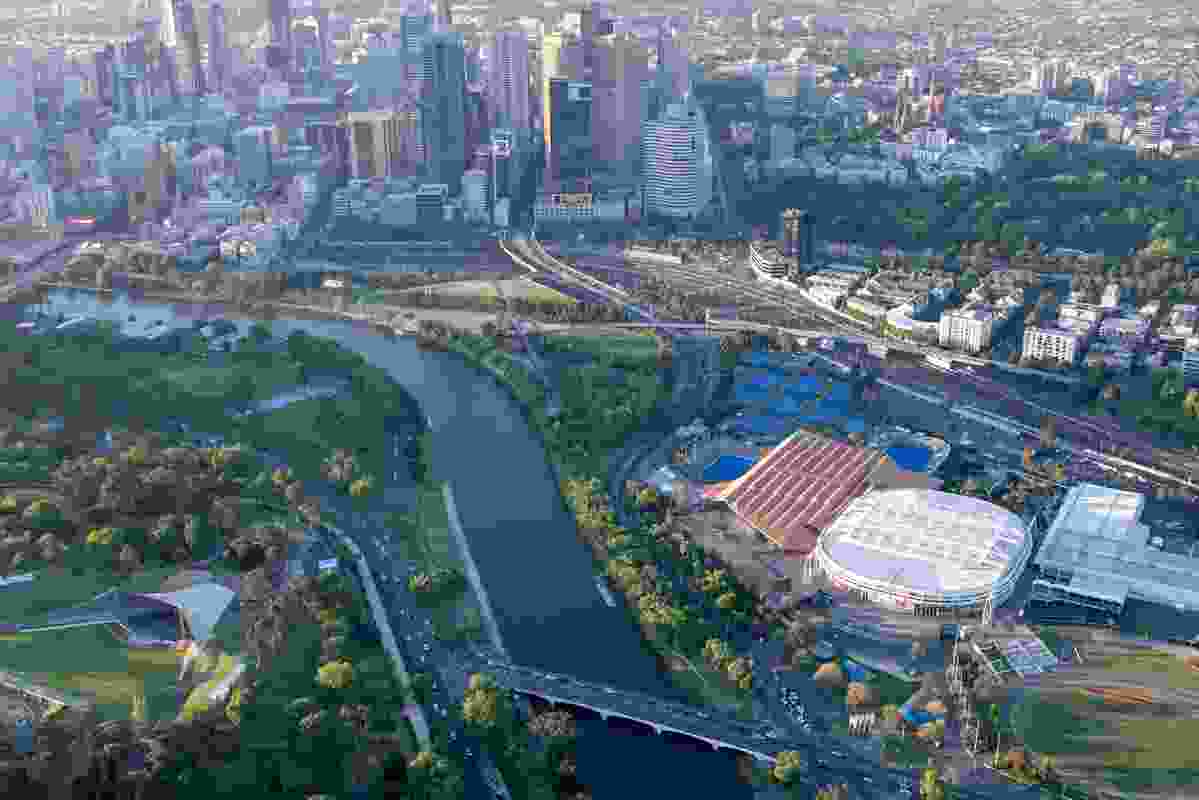