On a striking site, a timber-clad wall wraps a geometric building form before disappearing into the slope of the paddock.

The kitchen and dining room are filled with light and focused towards views framed by glazing.

Every time we place a new building in the ground, we establish and reflect a relationship with the natural elements. Of course, this isn’t a new idea – in fact, there is enough writing on it to fill several libraries – but the proliferation of discussion doesn’t reduce the tussle with the issue that each architect experiences as they evolve a design. Placing a building within a spectacular natural setting only amplifies the debate. No stranger to this discussion, 1+2 Architecture evolved a design for a holiday home in the middle of a paddock on the side of a windswept hill, overlooking the Tasman Sea.

Answering a “fairytale” fax that arrived at the beginning of a Christmas break, 1+2 took on a loose, one-page brief from a couple based in Denmark. They had chosen a prime site in the middle of their sixty-hectare property overlooking Marion Bay, about forty-five minutes east of Hobart. Key desires stated within the brief were for a holiday home that was “square, straight, modern,” designed to “get the most out of the beautiful spot.” They planned to visit the house a few times a year for long stays, renting it as a guesthouse for the remaining period. The preferred site was on a knoll looking out to the wide view.

As Mike Verdouw of the practice states, this building would always be about “first-time visits,” or reconnections after extended periods away. So they understood that the experience would begin with a sense of delicious anticipation, well before anyone arrived at the front door. Consequently, considerable time was spent negotiating and planning the location of the 1.5-kilometre access road in relation to the site for the house. The revised site suggested by the practice runs east–west on the slope and sits just below the selected knoll. The approach road comes in from the west, skirting around a gully holding a remnant line of eucalypts.

While there are undoubtedly some happy accidents in the process, the outcome of this journey planning is delightful. The first, distant glimpse of the building is from the north-west, at an oblique angle to the building, revealing its angled form and glazed northern face. Disappearing behind the line of eucalypts, the structure reappears from due west, where one sees the wedge-like plan form marked out by the parapet before it once again slides from view. Breaching the brow of the hill, the visitor emerges above the house, which sits within the breathtaking panorama. As the road wraps around to the southern face for the last leg of the journey, the defining feature of the building – a sloping, sheer, timber-clad wall – shields the vista and offers up an extraordinary sight with which to begin a holiday.

The plan form of the house is defined by the macrocarpa wall, which wraps the southern, eastern and northern faces of the building. Conceptually, the practice saw this element as a “ribbon” or a “fence” that is articulated by its extension above the building as a parapet, and beyond the building as a timber barrier that seems to disappear into the slope of the paddock. Using a plank and batten system, the rough-sawn timber is intended to grey in the weather, allowing the house to read as a lone building in a paddock, like its lowlier farm-shed cousins. Climatically, the tall “fence” protects against the southern extremes, restricting apparent openings to one recessed doorway, while opening out towards the sun and view through a series of simple incisions on the east and north faces.

Once you pass through this stark southern wall, the rough, textured language of the wall drops away, leaving a smooth, white, light-filled interior. The building program is very simple, with sleeping and service spaces separated from living areas by an adjoining entry foyer and courtyard deck. The southern wall wraps the back of the sitting room so that there is a more enclosed, cosy space in which to read or watch television, while the kitchen, dining room and lounge space are entirely focused towards the glazing, which frames the view.

It is interesting to consider the question of whether holidays should be about withdrawal or reconnection. For its part, this house sets up a relationship with the landscape that is predominantly about pleasant separation. The isolated position in the paddock offers an elevated platform from which to view nature from a distance. The double-glazed apertures in the building skin become like viewing screens, through which one watches the weather pass or tiny boats silently make their way around the spit. While it is difficult to find fault with the approach (and I’m sure it’s a delight to stay here), I wonder if the interior could have captured more of the hide-and-reveal nature of the approach drive. For the daily act of dwelling in the building, it may have been interesting to offer other “depths of field” or viewing foci, if only to increase the drama of arriving at the optimum point from which to experience the stunning panorama. 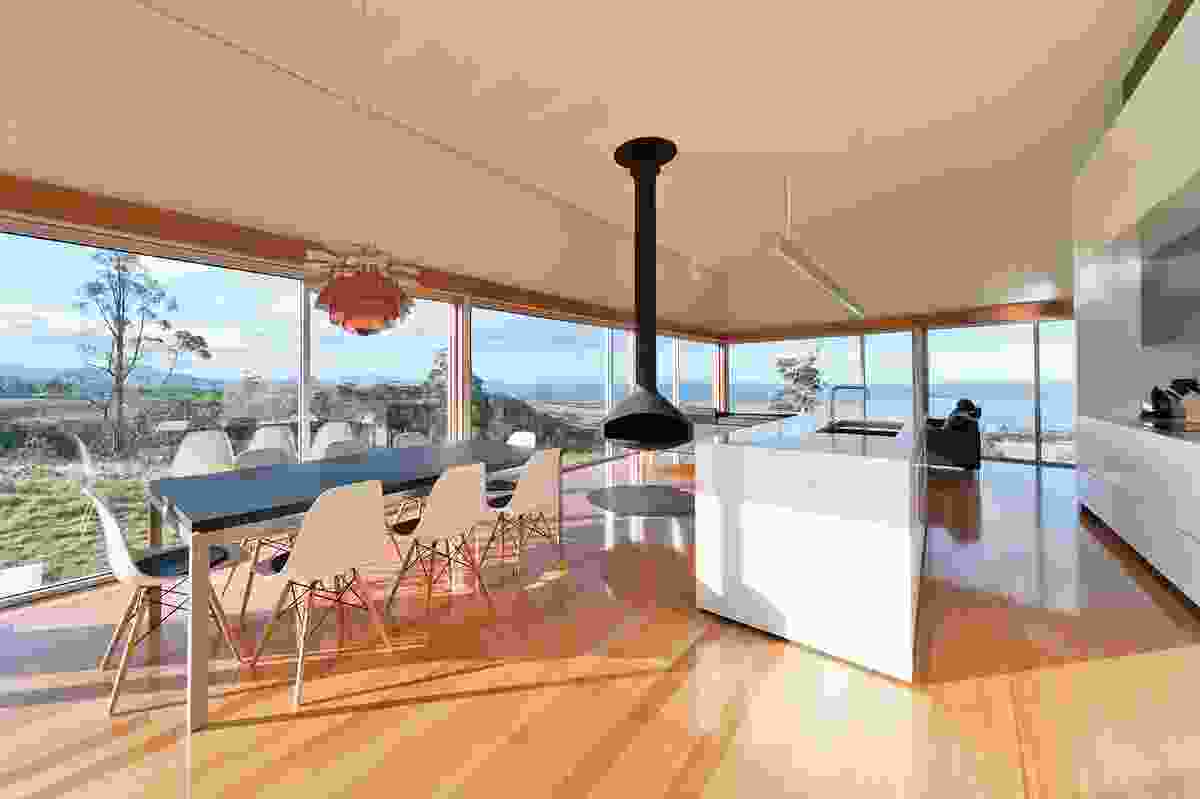 The kitchen and dining room are filled with light and focused towards views framed by glazing. 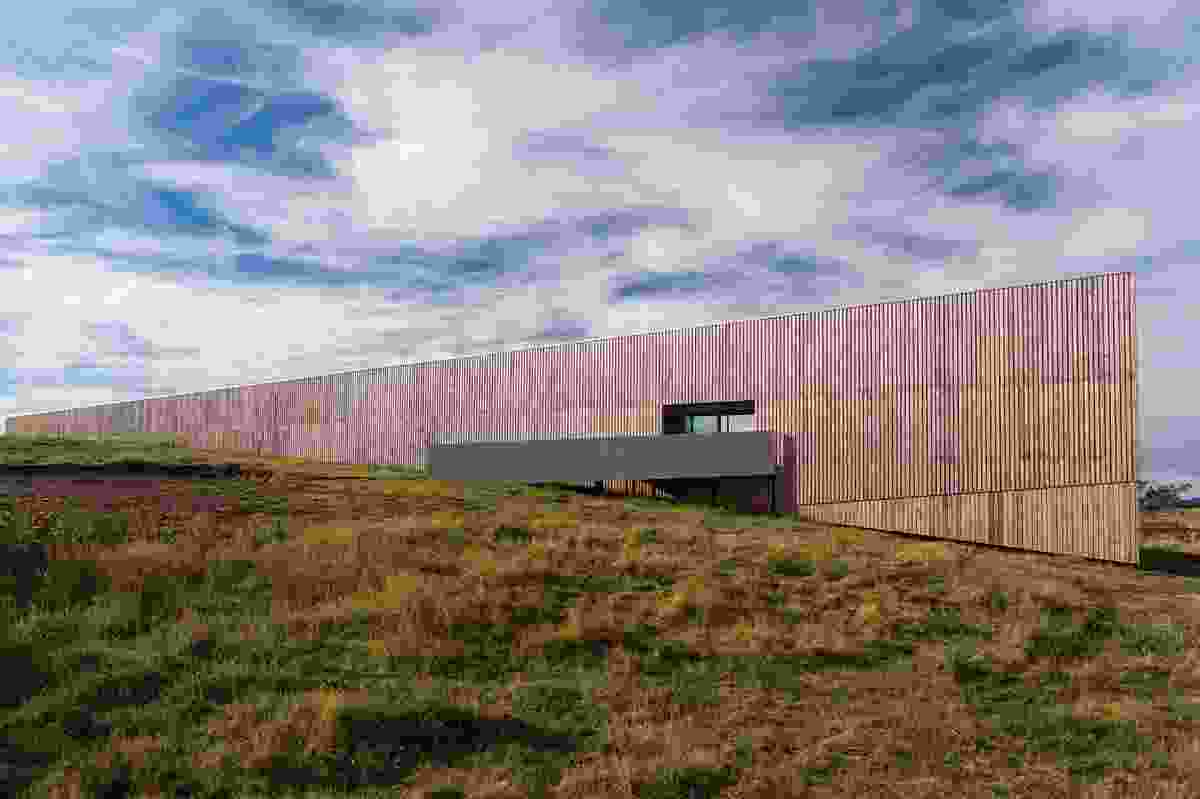 This “square, straight, modern” home is defined by a macrocarpa wall that wraps three of its faces. 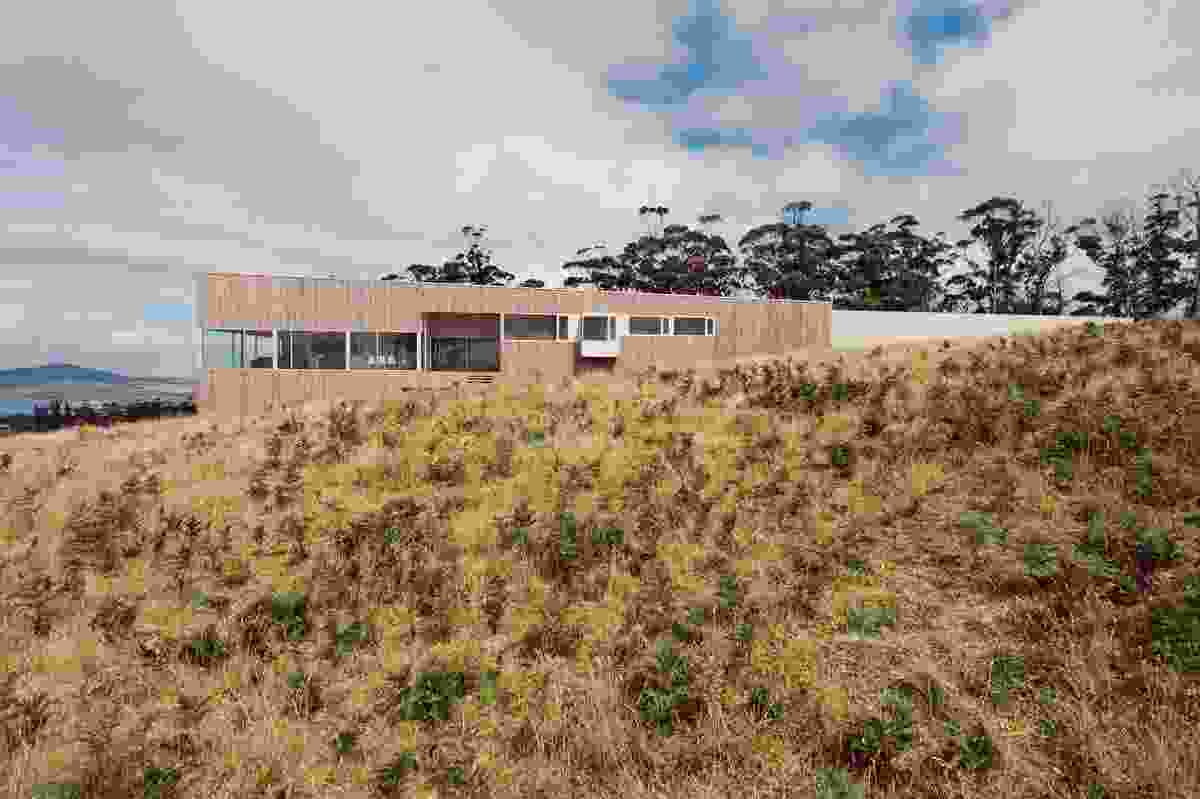 The first glimpse of the building is from the north-west, revealing its angled form and glazed northern face. 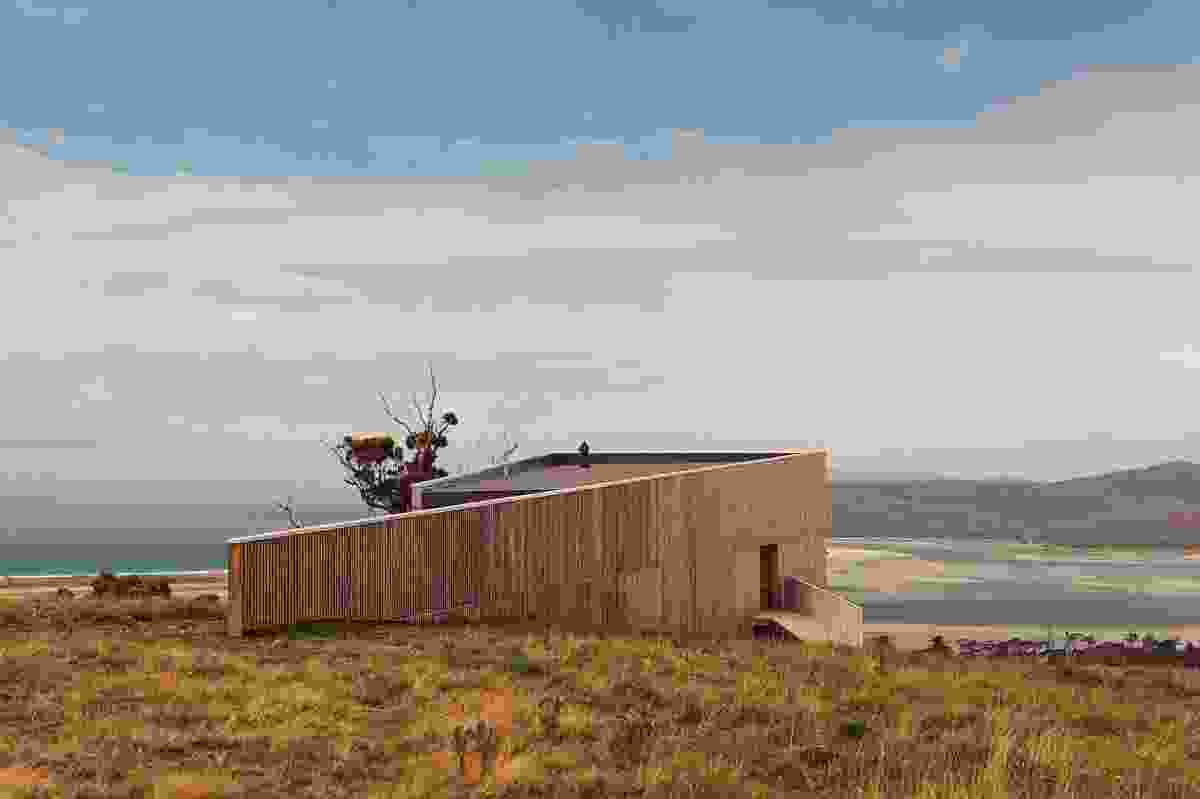 The timber wall is a “ribbon” that extends above the building as a parapet and beyond as a “disappearing” barrier. 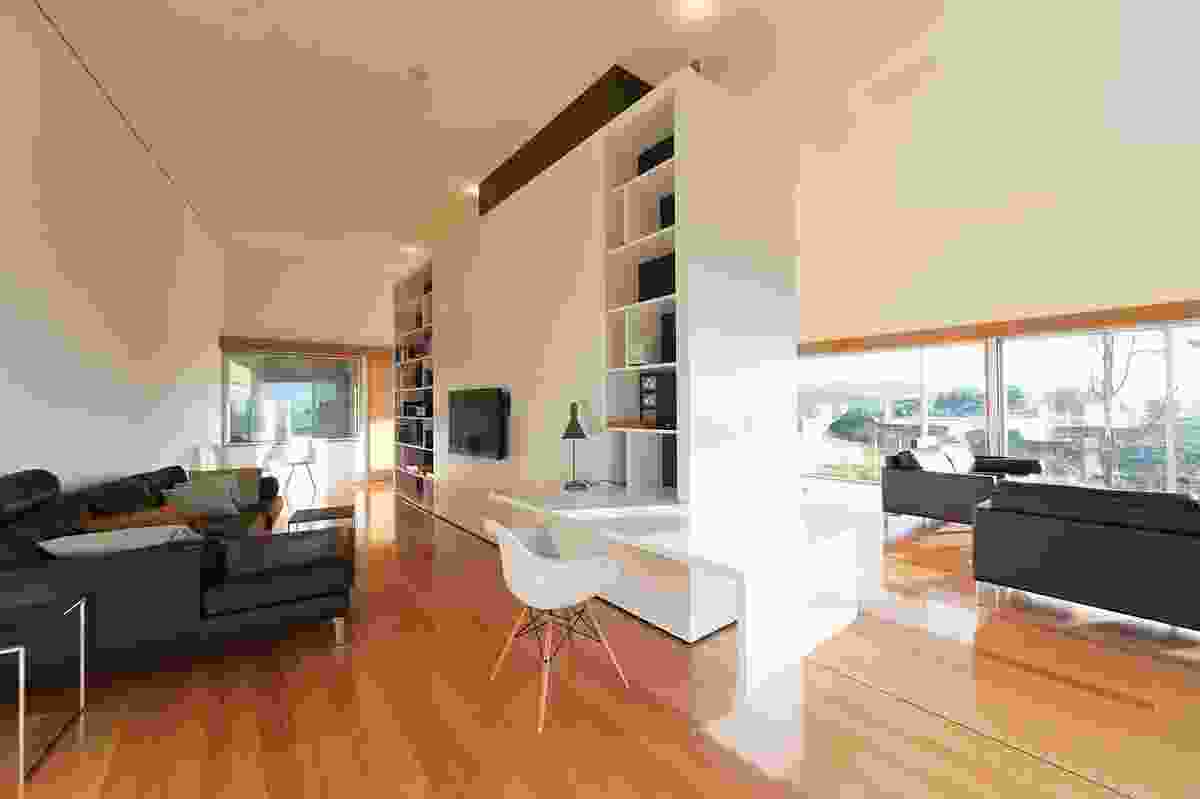 The southern wall wraps the back of the sitting room so that there is a more enclosed, cosy space for relaxing in.