A small postwar home with a large backyard has been reworked by Those Architects to create a much longer and more flexible house, a courtyard now wrapping around its central living spaces.

The placement of the courtyard distinguishes the kitchen from the dining/living space, while simultaneously connecting them.

In the south-eastern suburbs of Sydney, a curious species of housing type can be found in abundance. During the 1940s, 50s and 60s a series of odd little duplexes of varying style and detail were built. Usually double brick, sometimes symmetrical and sometimes not, often finished with the small flourish of a slight verandah curve or plump concrete porch pillar, these generally stocky and robust creatures pepper the dunes leading up from the beaches. Sitting low, they are set to withstand the best a southerly can muster.

In the succeeding years many of these little homes have been puffed up with another bedroom or expanded living room, often to capture a glimpse of water. With all the finesse of a tank turret, these houses provide their inhabitants with extra space, but seldom better amenity. So when the clients for Maroubra House, Josette and Ben, bought one of these homes in near-original condition from Josette’s grandparents (who also owned and had lived in the house next door for sixty years), they were certain they didn’t want it to become another toady delight. While they understood the limitations of the house, having known it for such a long time, they also knew the good things about it. They wanted to keep and strengthen these positive aspects to create an ideal family home.

When Simon Addinall, co-director of Those Architects, sat down with his clients to consider how the house worked, the result was a complete rethink of function and layout. While the house did have a reasonably sized rear yard, the east–west orientation of the block meant that it didn’t have the best aspect. What it did have was a bigger than usual space down its northern side that formed an access way to the original front door and the backyard beyond. Realizing this access way was a conduit to utilize northern light, Simon suggested that the house might benefit from a substantial reorientation to create a light-filled edge along the entire length of the house.

This led to the decision to make the new house even longer – the backyard space would be lost in favour of a series of living spaces with access to sunlight, and the spatial programming of the interior would be reordered (private areas moved toward the front, public spaces to the rear). In doing this, the outdoor space shifted from the back to the middle, creating a courtyard around the centre of the home, close to the kitchen. This courtyard also facilitates the retention of a much loved camellia that Josette’s grandparents had planted some fifty years ago – a small element that makes such a difference to how the house is felt, and lived in.

Creating this central court also set a natural point of entry into the new home. The original entry was at the side of the house. Moving it further down, adjacent to the camellia courtyard, enabled the old entry and original bathroom adjacent to be rejuvenated into a more generous contemporary bathroom, bookended by new storage space to serve the bedrooms on either side. Shifting the front door also allowed Those Architects to explore a binary language in the design. On one side of the house, the private bedroom/bathroom spaces retain the best qualities of the original dwelling, while on the other, the new kitchen/living/dining space subtly hints at an industrial aesthetic, with an exposed LVL roof structure, plywood and concrete in the flooring and kitchen bench, and a seat-height apron that runs around the new spaces. The inset of the courtyard into the plan also casually sets the kitchen apart from the living and dining area so that they are separated enough, but connected at the same time.

Materially, the timber/concrete combo works well – the robust concrete surfaces are tempered by an articulated ceiling plane that also acts to soften the acoustic qualities of the new interior. Playful detailing, such as the soccer net screen that is set up at the change in level between the old and new parts of the house, also adds a layer of creativity to the new home.

Simon and the team have cleverly incorporated elements in their design that would allow for future expansion of Maroubra House, should it be required. A zone has been created to house a stair that would connect to additional upstairs space. It is so subtly integrated into the current house as storage area that when I visited, I didn’t notice it. The lovely thing about it is that the generous new spaces won’t need to be compromised should further expansion be required. As we grow, as individuals or as families, we change. Being able to do this generously is a noble ideal, something that this house and its family have done over the past half-century and are set to continue to do into the future.

Other
Stools by Grazia and Co; Stylecraft dining table and chairs; custom joinery and wine cabinet by Goodes Joinery. 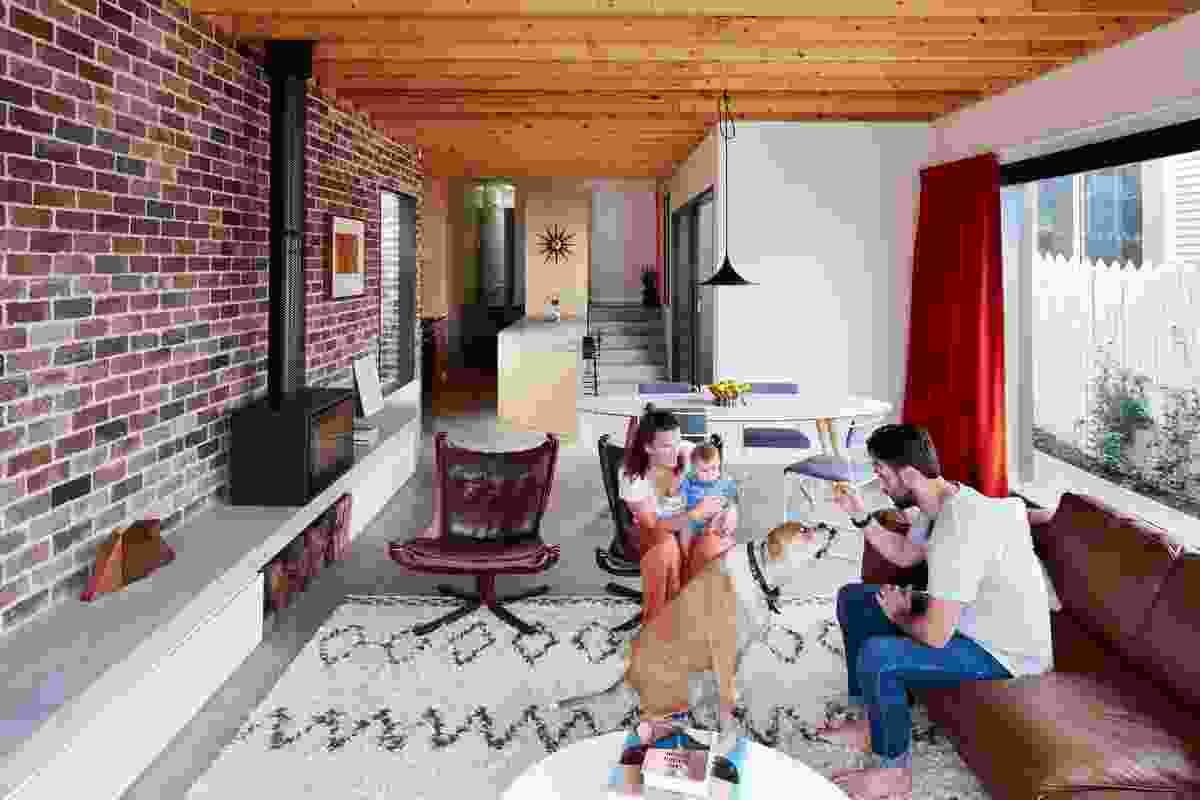 The placement of the courtyard distinguishes the kitchen from the dining/living space, while simultaneously connecting them. 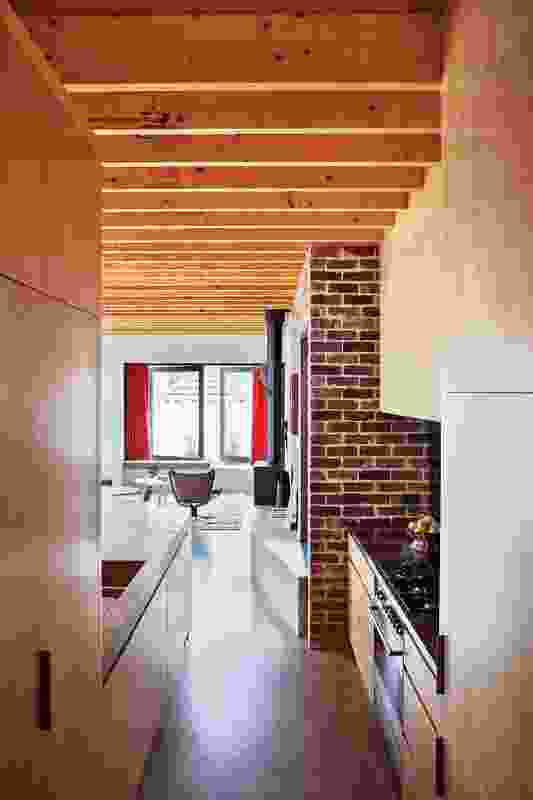 Recycled red bricks from the existing dwelling make a bold statement in the kitchen/living area, tying old and new elements together. 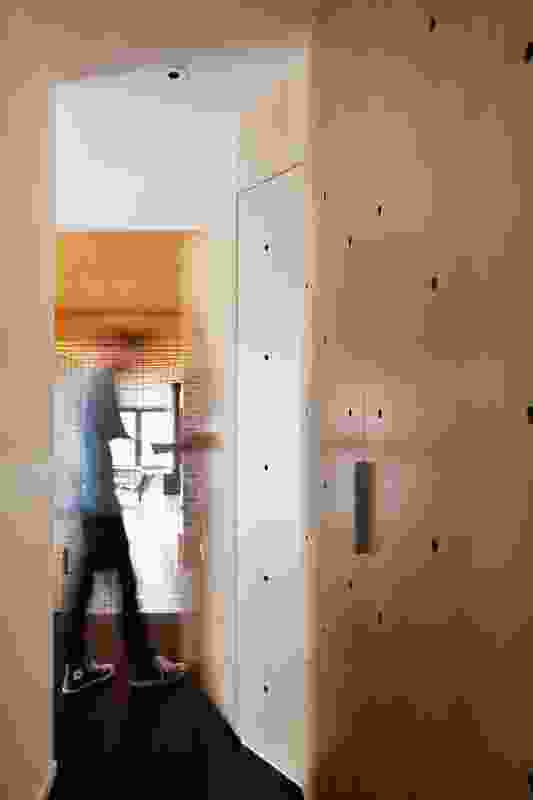 Playful detailing includes a soccer net screen between the original and new spaces of the house. 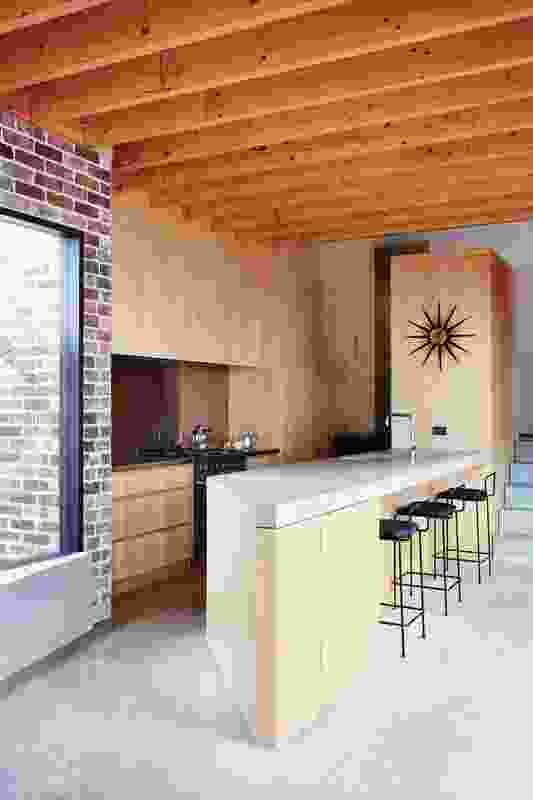 The new spaces hint at an industrial aesthetic, with an exposed roof structure and plywood and concrete surfaces. 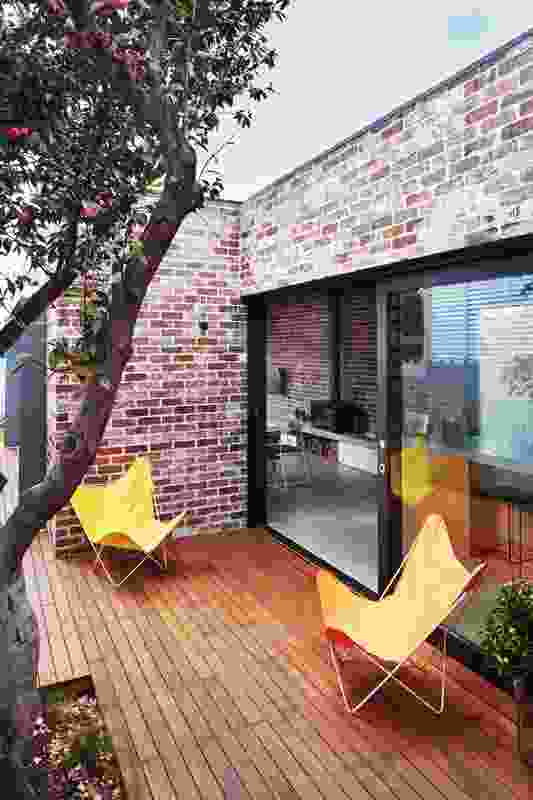 The courtyard retains a much loved camellia tree that Josette’s grandparents planted some fifty years ago. 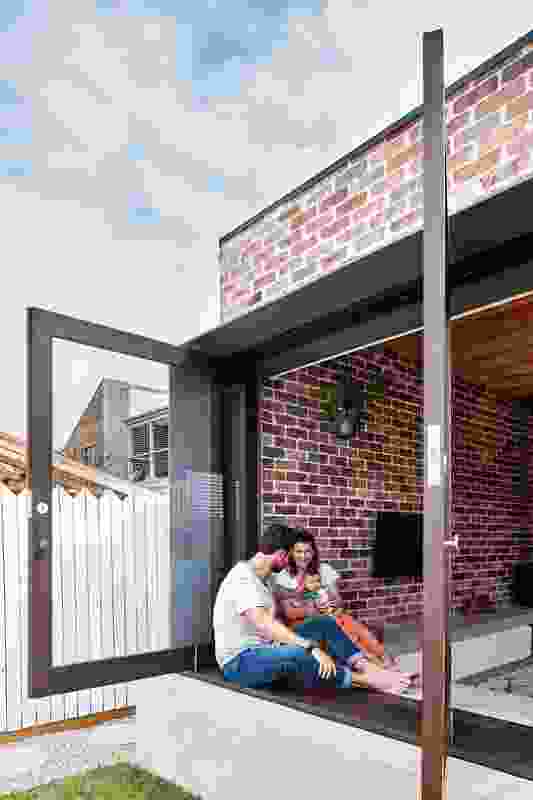 Large windows open to the lawn, a wide concrete windowsill/bench providing an ideal spot to relax. 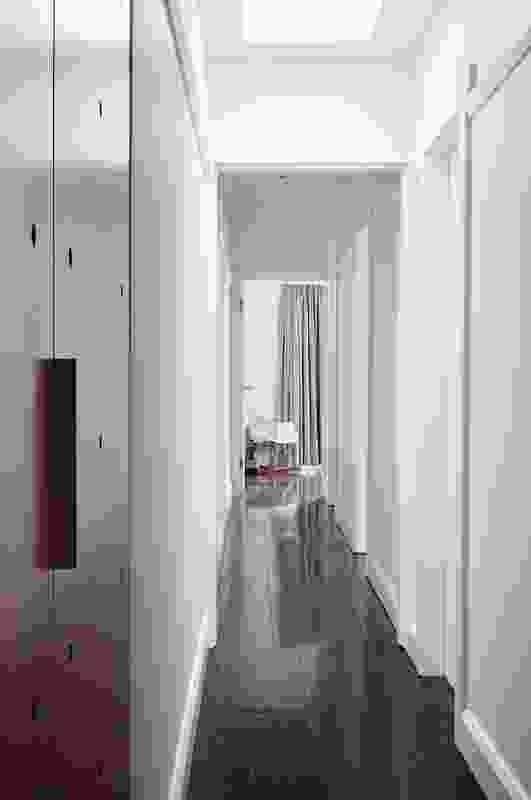 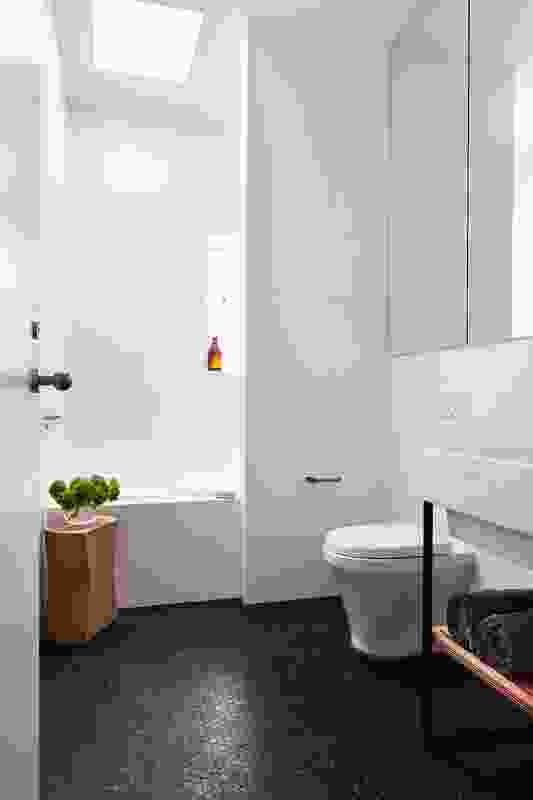 The old entry and bathroom were transformed into a larger, more contemporary bathroom. 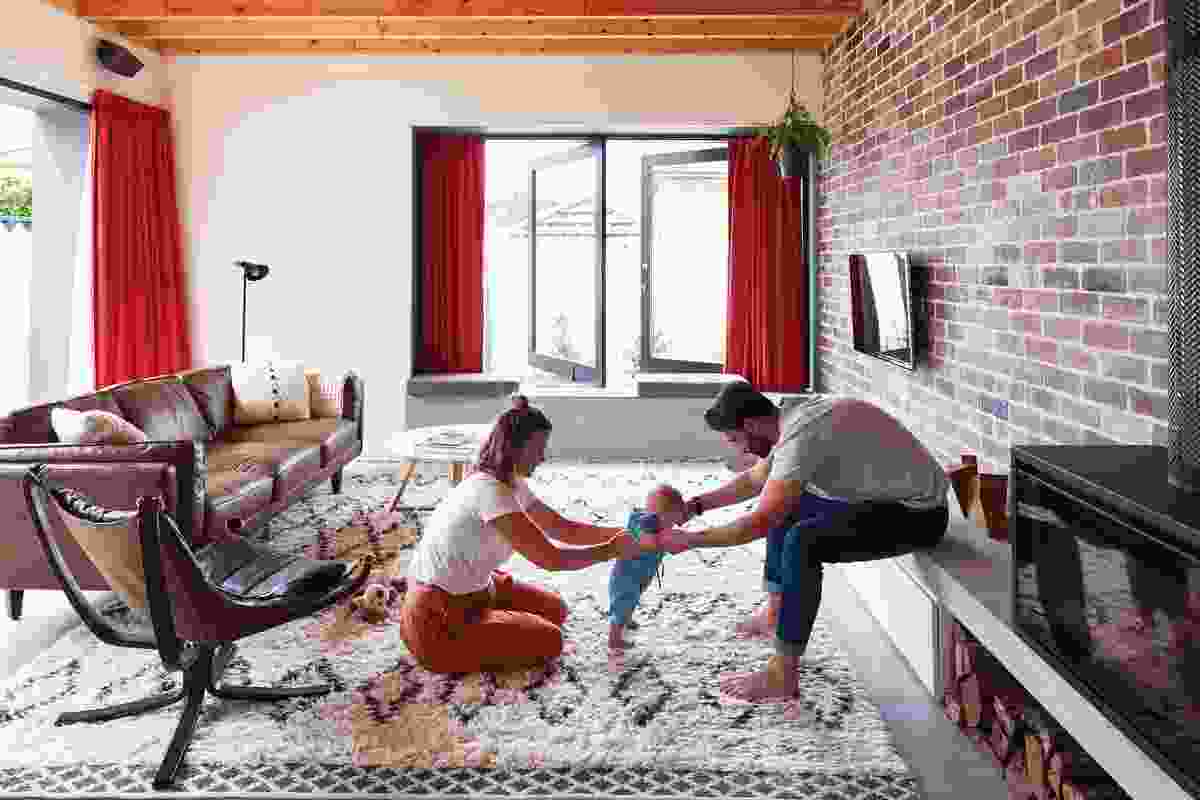 The brief called for a home that was “flexible, robust and light,” suitable for a growing young family as well as for entertaining. 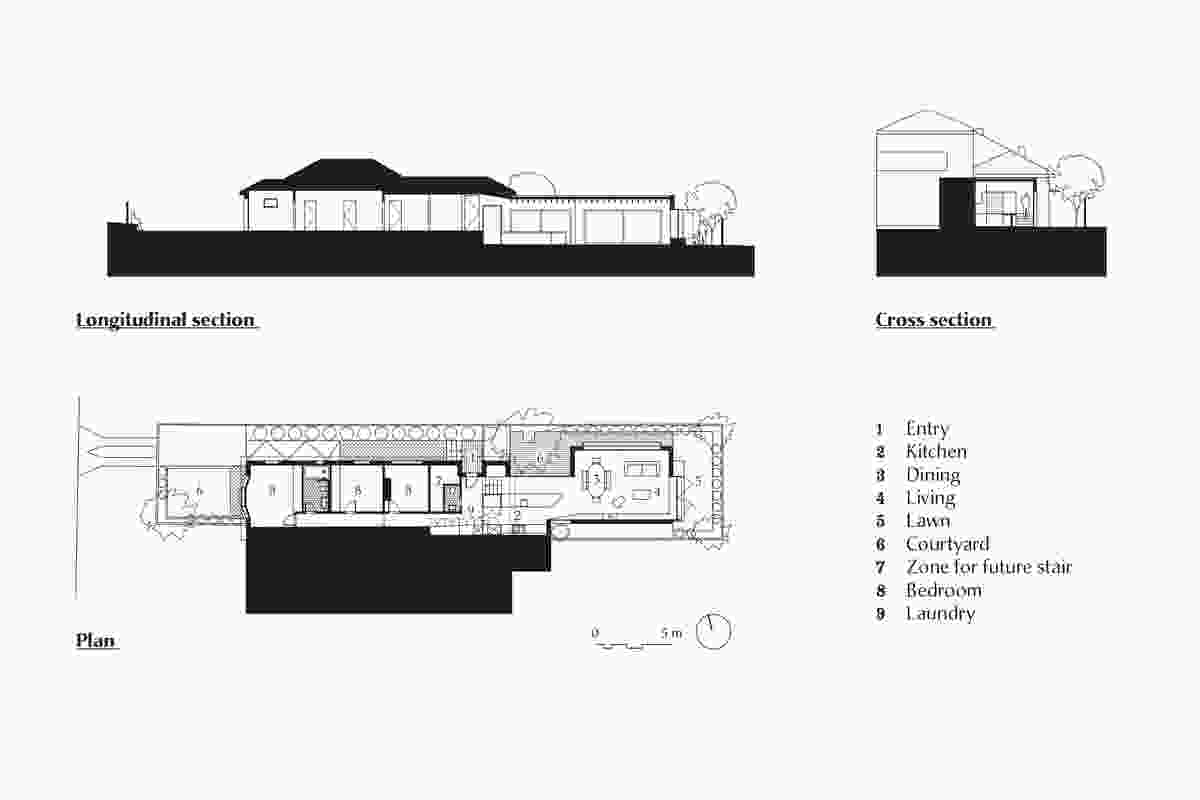 Plan and sections of Maroubra House by Those Architects.