This Californian bungalow has been renovated and extended by BG Architecture into a flexible series of spaces that will adapt to the changing needs of the growing family that lives here.

A low strip window in the kitchen offers views to the soft, green plantings along the side boundaries.

Establishing a connection between indoors and out is pretty much non-negotiable in Australian residential architecture. Views into gardens, flooring that flows out through bi-fold doors onto courtyards and decks, operable windows that draw in cool breezes on hot days – they’re the hallmarks of homes designed not just to look great but to also be lived in. And yet, despite the familiarity of all these design strategies, we can still be surprised and delighted by them. This Californian bungalow in the Melbourne suburb of Balaclava, newly renovated and extended by BG Architecture, is a case in point.

The front half of the house is given over to private spaces – a main bedroom with a walk-through robe and ensuite, three kids’ bedrooms and a communal bathroom – arranged either side of a dog-legged hallway that bisects the original bungalow. The bedrooms and hallway have simply been refreshed, but the bathrooms have been remade with a more contemporary vision. Heavy-grained timber joinery, concrete benchtops, mirrored cabinets and black large-format porcelain floor tiles give these wet areas an understated elegance, while feature walls clad in white, star-patterned mosaic tiles add detail that’s at once decorative and textural.

Further down the hall, a glance through an open powder room door reveals another elegant space – this time, a wall of rustic, terracotta tiles provides a warm backdrop to the neatly composed grouping of a small, white handbasin, a circular mirror and two simple white pendant lights.

The view is only a momentary distraction, however, because the powder room also marks the point of transition between the old bungalow and the new extension. And what a transition! The narrow central hall opens out into an expanse of linked indoor and outdoor zones, its sense of compression replaced by an awareness of space expanding vertically and horizontally. To the left is the kitchen; straight ahead, the dining area; beyond that, and partially concealed by a fireplace, is the lounge; and wrapping around all this, on two sides, an outdoor deck, lap pool, trees and grass.

The entire area, essentially the back half of the property, is artfully unified. Extensive glazing plays a key role in this, of course, but so too does the clever manipulation of sight lines. Plantings along the property’s boundary give a leafy backdrop in most directions, and because the outdoor spaces occupy a relatively shallow strip around the building structure, the angle of the outlook reveals much more green than sky blue. A low horizontal strip of windows at the rear of the kitchen provides views of a third green boundary. So instead of hard fences, with all the limitation and constraint that they imply, we see a space with soft, green, seemingly porous edges. (This effect will only be heightened as new plantings mature, and a bank of citrus trees is added along the rear wall of the old house.)

Materiality has also been used to break down boundaries. Inside, the kitchen, dining and lounge areas are unified by a single slab of polished concrete flooring; outside, the pool deck sits beneath a timber pergola that looks almost like a deconstructed version of the timber-clad pavilion itself, giving the impression of an extra room rather than simply another external space.

Despite this indoor/outdoor expanse, the extension doesn’t give itself away at a single glance. A small room leading off the kitchen accommodates a study area, and the fireplace at the centre of the main volume – a two-sided tile-clad element – conceals most of the lounge area. One wall here, constructed from red bricks salvaged on site, brings a cocooning warmth, and it doesn’t take much imagination to realize that the day bed under the lounge window must be a fantastic place to read the paper, particularly in winter when dappled sunlight streams through the garden from the north.

The day bed is more than just a perch for a lazy Sunday morning, however – it also accommodates an impressive amount of toy storage. And this highlights the reality of what BG Architecture has created. This house is, as required by the client brief, a home where three young kids will become tweens, teens, adolescents. Between the contained old section of the house and the carefully zoned new extension, they’ll be able to come together and avoid each other as activities and moods dictate.

Later on, the discreet barbecue area at the rear of the old house, the deck, the pool and the patch of grass at the back of the property, will also give them a totally awesome place for parties. But let’s not get ahead of ourselves. This house is no place for rushing things. For now, at least, it’s an urban idyll of rustling newspapers, rummaging toy sounds and green leaves quivering in the breeze. 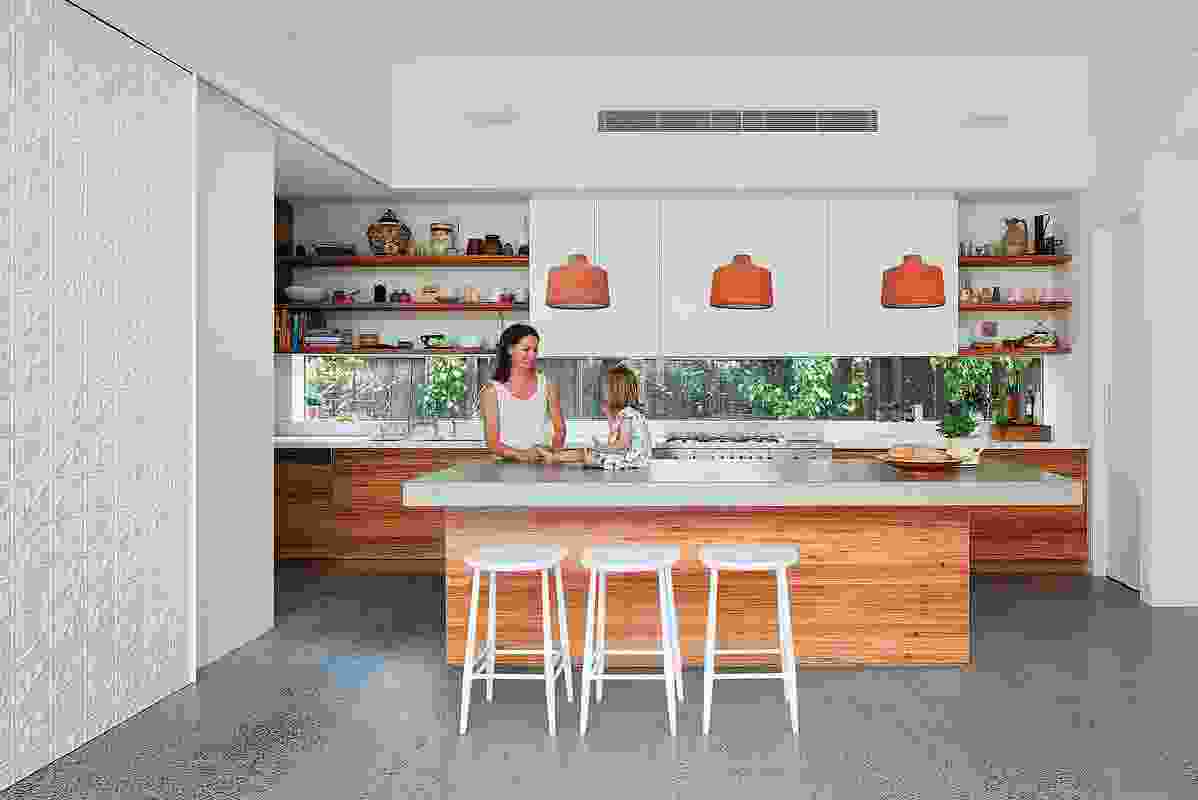 A low strip window in the kitchen offers views to the soft, green plantings along the side boundaries. 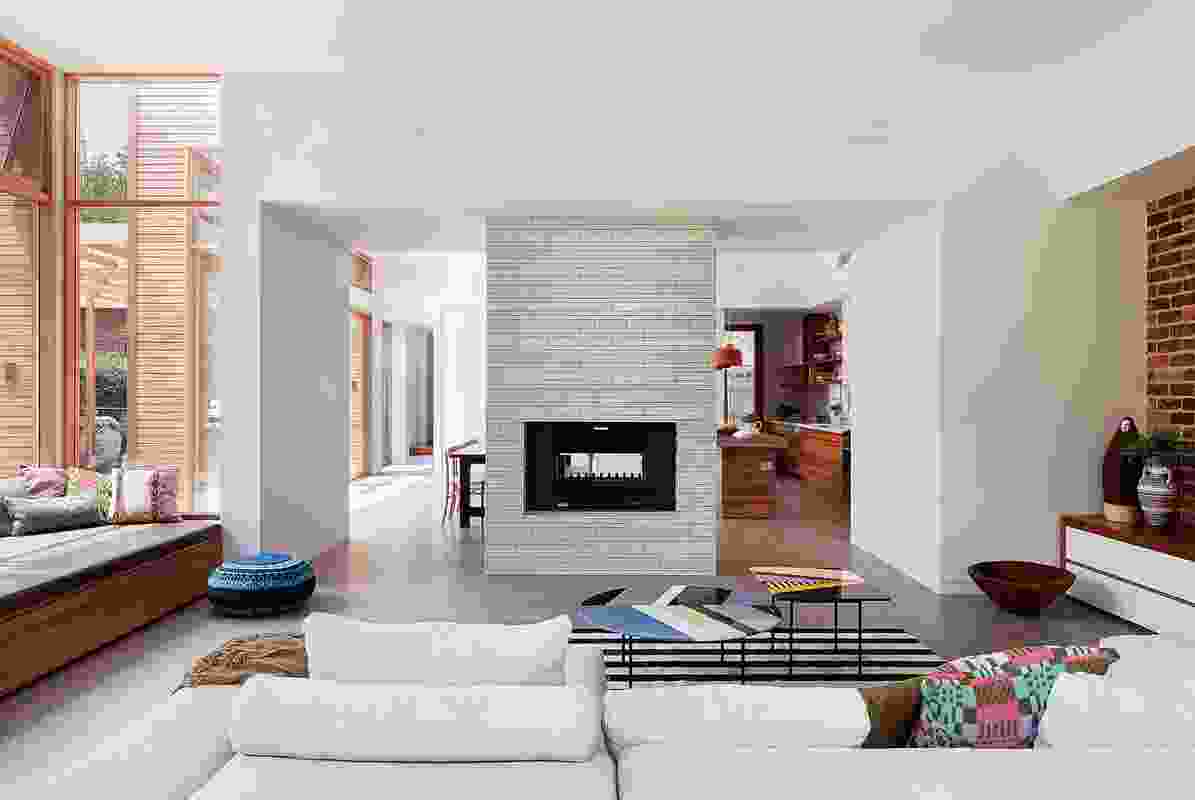 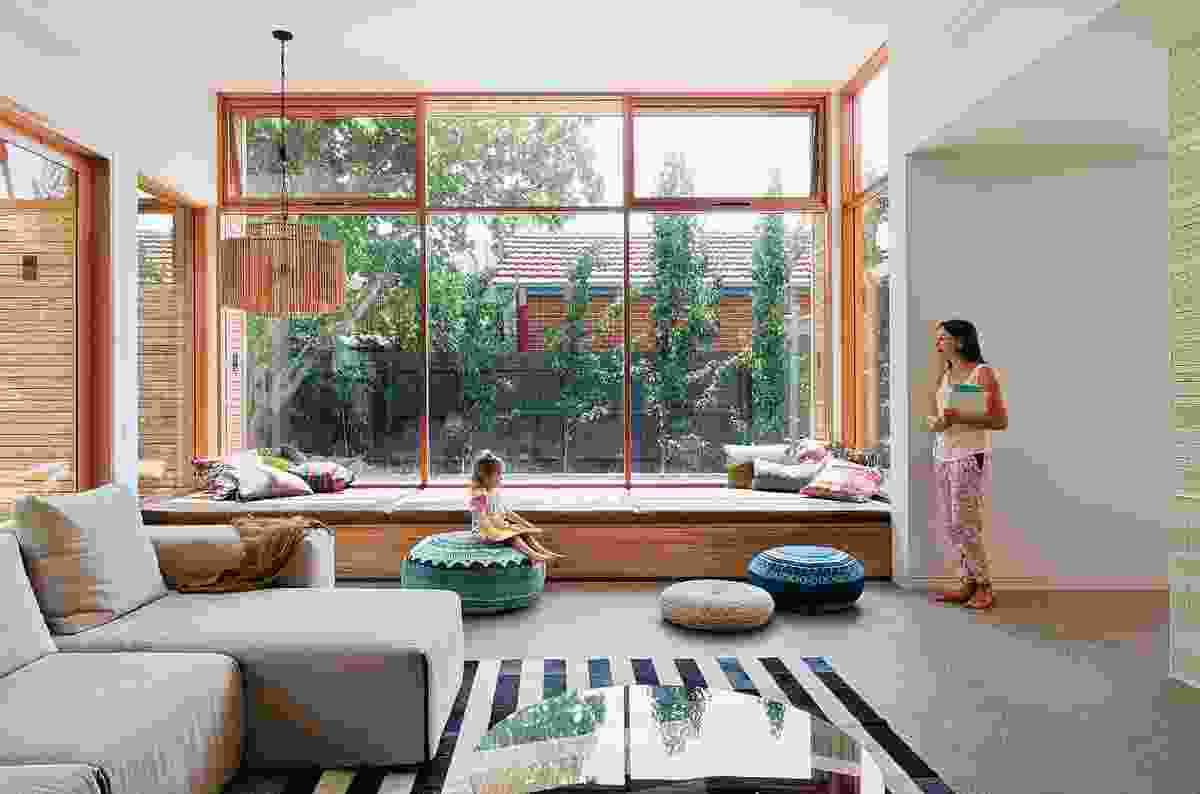 The day bed offers an ideal spot to relax under the bay window, and also provides storage space. 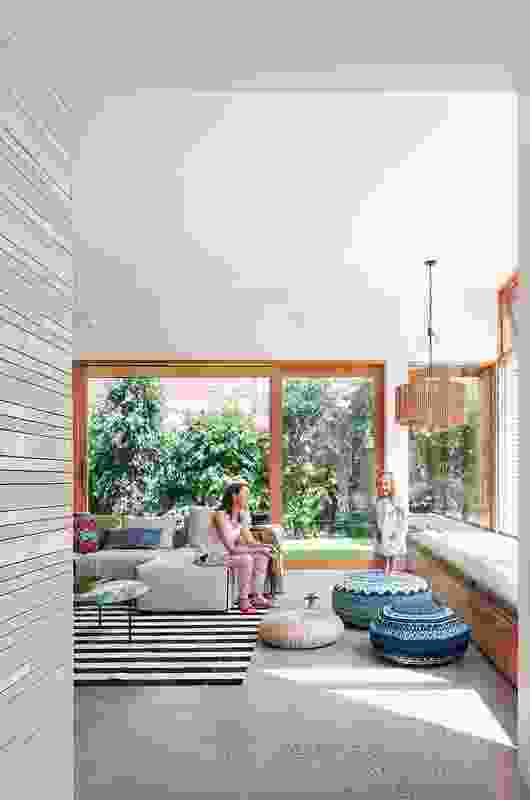 The new lounge area is partially concealed by a fireplace, providing some separation from the more contained spaces of the original house. 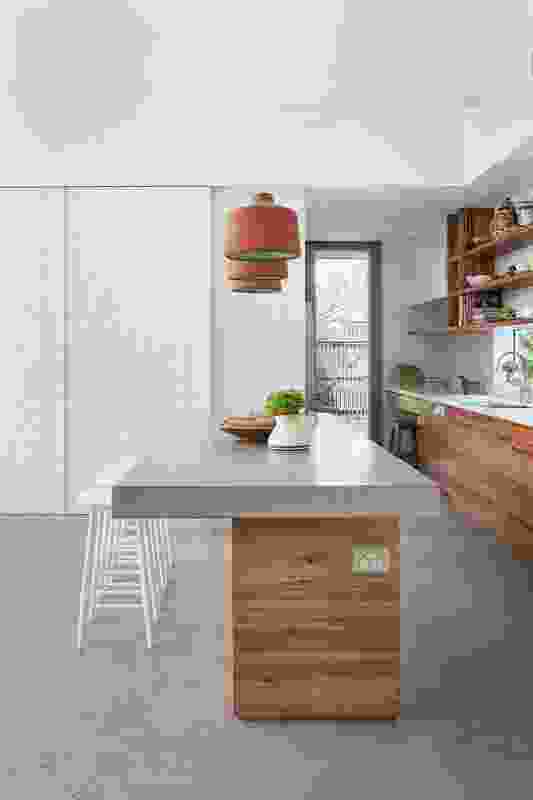 A white, pressed metal cupboard door adds another texture to the kitchen. 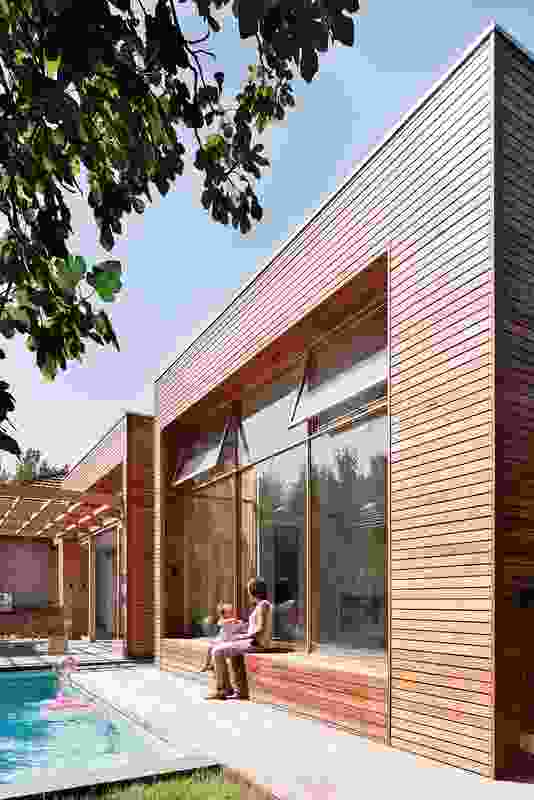 The extension’s exterior makes a bold statement, but doesn’t give much away about the interior at first glance. 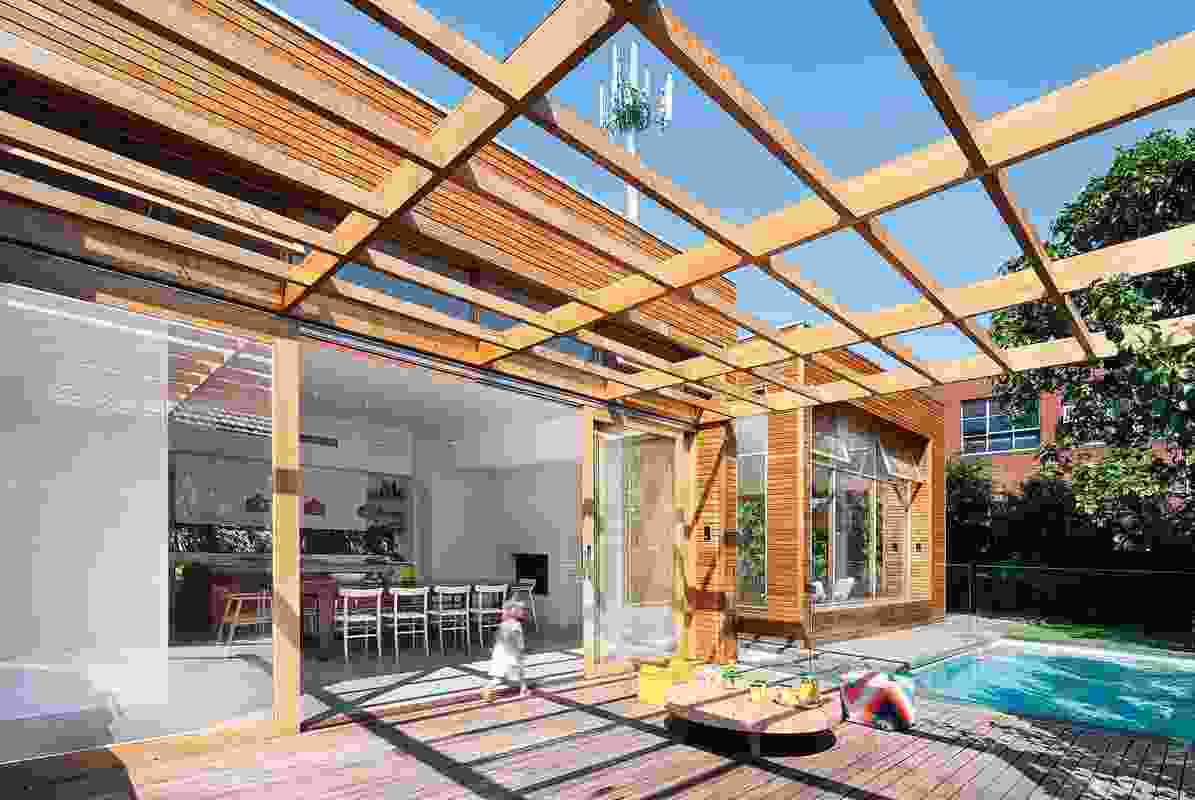 The pool deck sits under a timber pergola that resembles a deconstructed version of the timber-clad pavilion. 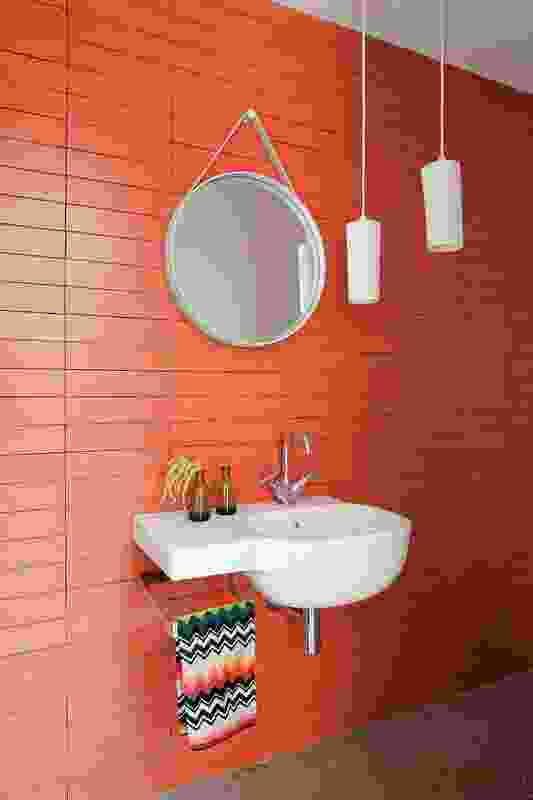 A wall of rustic, brick-orange tiles provides a warm backdrop to the grouping of mirror, basin and pendants in the powder room. 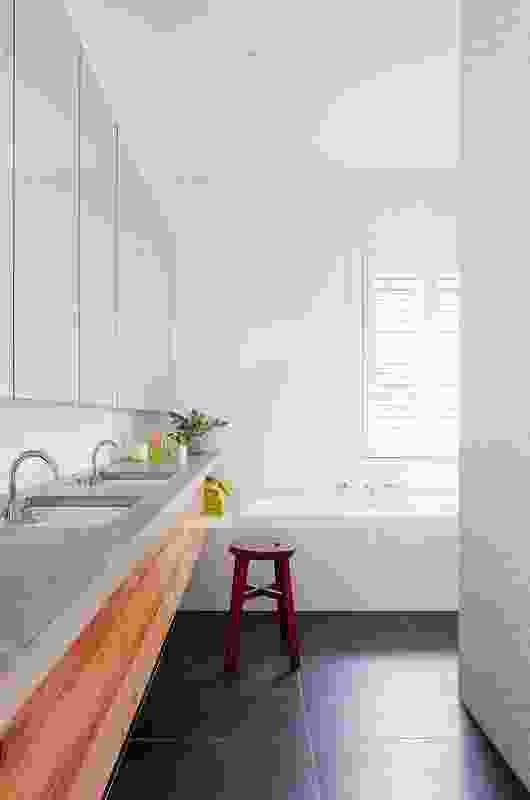 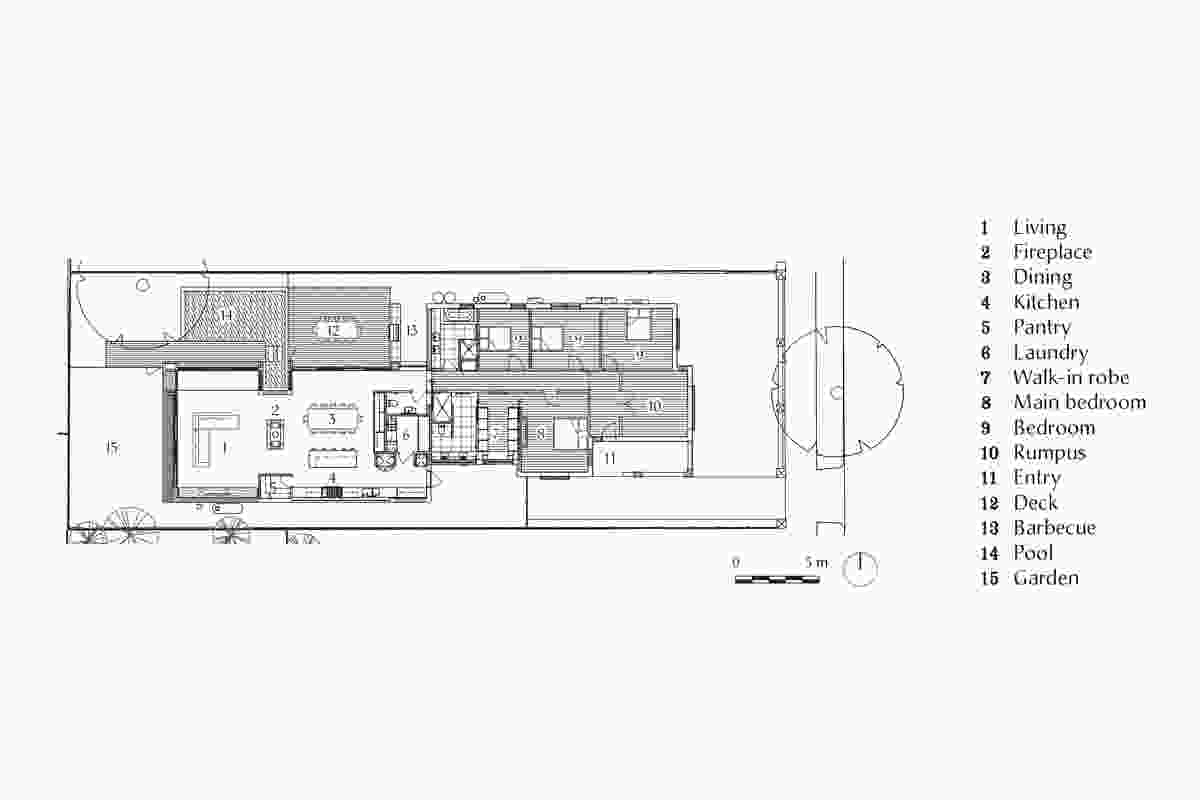