Kerstin Thompson Architects conceives a police station that is as much about community service as it is about disaster management in the Victorian town of Marysville.

In lieu of a fenced compound, the Marysville police station features a semitransparent facade that engages with the community.

Kerstin Thompson Architects (KTA) has developed families of subtle and poetic approaches to architecture, deployed in this project to address the needs of a community recovering after a catastrophe, honouring memories of the past without symbolizing them, expressing the democratic inclusivity that is driving the regeneration of a town but also providing the actuality of an essential civic presence.

Marysville is a small Victorian town in the southern foothills of the Great Dividing Range that separates east-coast Australia from the hinterland. A great arc of mature oak trees curves down past a park towards a cricket and football oval in the bowl of a valley, from which the often snow-covered peak of Lake Mountain can be seen. After the Black Saturday fires of 2009 almost all that survived of the town was this arc of oaks and the smooth turf of the oval, and today the peaks still show silhouettes of the pencil-slender trunks of the burned mountain ash forest.

After the catastrophe there were those who moved away, determined not to return, and those who stayed, determined to rebuild the town and honour its history. Framework plans were devised, reflecting the local identity of the town. Reconstruction began with houses, small hotels, shops and cafes more or less as they had been, in a small-town, brick-veneer and corrugated-iron vernacular. Flanking the downhill edge of the park, Bamford-Dash Architecture designed a Learning from Las Vegas-style information centre, a shed-like form proclaiming in large letters MARYSVILLE. Eventually the community decided that it would be appropriate to locate the lost police station on the uphill flank of the park, creating a civic cluster around what is now known as “Marysville Heart.” But there were concerns. One “Las Vegas” was enough, thought some; a fenced compound was feared; the park had become the focus of Arcadian memories that needed to be protected; and rebuilding to the historical plans was a sentimental favourite but the nature and scope of policing had changed to become more about daily community service – lost property and counselling – and (rarely) about disaster management. There was a suspicion about solutions being imported from the city a few hours away across the ranges.

KTA, which had completed three community police stations and one larger one, was appointed. This history meant that the architects, who have also done a fire station, have experienced the nuances of uniformed cultures with their alternating routines of waiting and periods of dynamic action. The practice has grown into this from working on individual houses, and has developed an ear for the unspoken hopes and fears of clients. These close-listening skills can be seen at work in its visitors’ centre for the Australian Garden at the Royal Botanic Gardens Cranbourne, a building that gently and almost imperceptibly, through its siting and thoughtful arrangement of program, gives visitors an overview before they descend down meticulously calibrated ramps and stairs into the gardens themselves. The houses, which KTA continues to design, have developed a language of rhomboidal or rectangular roofs angled and tilted to admit and exclude sunlight and capture views. Families of approaches have built up and at Marysville these poetics parade onto the stage.

As in KTA’s other projects the police station program was analysed abstractly, not function by function, but in zones running from the intimate and personal to the formal and public and the formal and private. These zones run in parallel, growing in breadth across the width of the site. In a move first identified by Beatriz Colomina in an Adolf Loos house, a view cone from the most removed and intimate place to the place of public arrival was established, here running from a tea-making bay window, with a domestic view into the park, through a common room area to the enquiry desk through a glass wall made translucent by a pixelated photograph of the old police station (the only symbol of the past used).

The rhomboidal roof does the work of scaling the spaces across the zonal gradient, starting from a low point along the north-east face of the building. On this edge the eaves are tucked down onto a paling wall made of radially cut timber purlins arranged in alternating flat-face and end-on pairs – an arrangement that creates intense shadow lines and reminds the architects of the slender trunks of the mountain ash trees. These palings fan out to become window mullions and close up to form screens around a backyard, a barbecue court and a fernery. As the ground falls northwards towards the oak-lined street, this facade sits on a series of contoured platforms that step down into the park. The site setback on this side has been made over to the park and the subtly rhythmical, low screen wall does the duty of the much-feared fence. The roof rises up towards the southern boundary of the site, where it terminates on the solid walls of the sally port cell block and secure parking dock with undisguised finality. The service areas of a proposed development next door will back onto this. At the midpoint of the cross-section, the roof at the rear has covered a yard where the palings are just that – a timber fence to the park – and here the planting has already overgrown and concealed the building.

Towards the street front the roof is pulled across to the site boundary and then cut back at a sharp angle to the park edge. This over-sailing plane is supported by a cylindrical column on its north edge and vertical steel struts along its south-western edge, struts that flash between appearing solid when first seen and then become a permeable screen as you walk past. The architects use this part of the roof to “build shadow” and “grade the project back into the site” while also creating a canopy that links into that of the oaks lining the street. This covered space provides civic scale as well as shelter from sun and rain. It has a ceremonial purpose, as when it was filled with white plastic chairs for the opening, but more usually it offers casual respite.

The street falls to the north-east and the forecourt of the station is faced with a retaining wall slowly rising against the slope. Along this rises the ramp to the front door, which runs to the corner limit of the site and then cuts back to the entrance lobby. This raised garden overlooks the “Marysville Heart,” creating a gradually intensifying sense of a civic arena and subtly conveying the dignity of the police station mission, which is labelled with a badged sign in the form of a lectern at the apex of the ramp. The slow angled ramp and a set of stepping stones that lead directly to the door give a duality of arrival and departure modes – rapid or reflective – a duality that was deployed by the architects at Cranbourne and that seems in itself to signal the various modes of the use of the station.

We are not reading domestic approachability at one moment and civic duty at another, but a constant flickering between the two, as if the building is telling us that we cannot have the one without the other.

The building embodies a domestic to civic conversation, but there is no ambiguity here. We are not reading domestic approachability at one moment and civic duty at another, but a constant flickering between the two, as if the building is telling us that we cannot have the one without the other, that we live on a gradient between the two, just as the lone policeman who at quiet times makes tea and looks out into the garden can on (hopefully) rare occasion muster to deal with an emergency or a felony by simply turning his head.

KTA’s ability to marshal the poetics of this spectrum of life, from the mundane to the dramatic, has emerged through many years of designing and is won from careful listening to what is unspoken in the cauldrons of family and community living in difficult terrain and in an increasingly extreme climate. 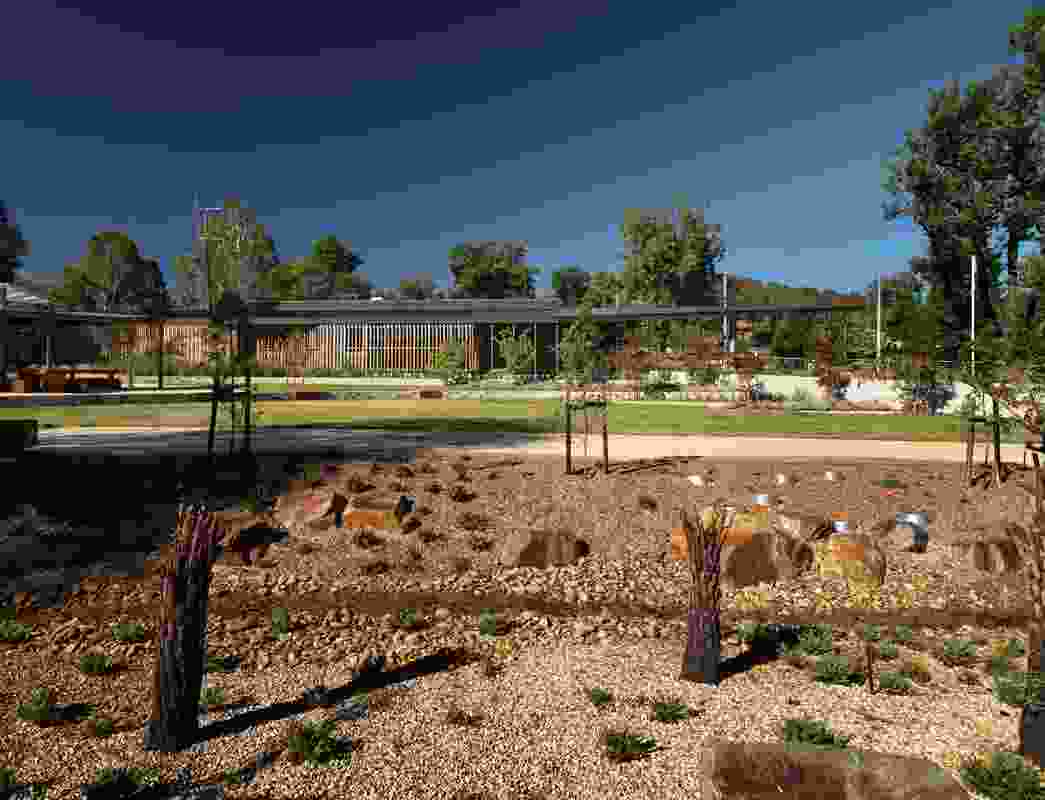 In lieu of a fenced compound, the Marysville police station features a semitransparent facade that engages with the community. 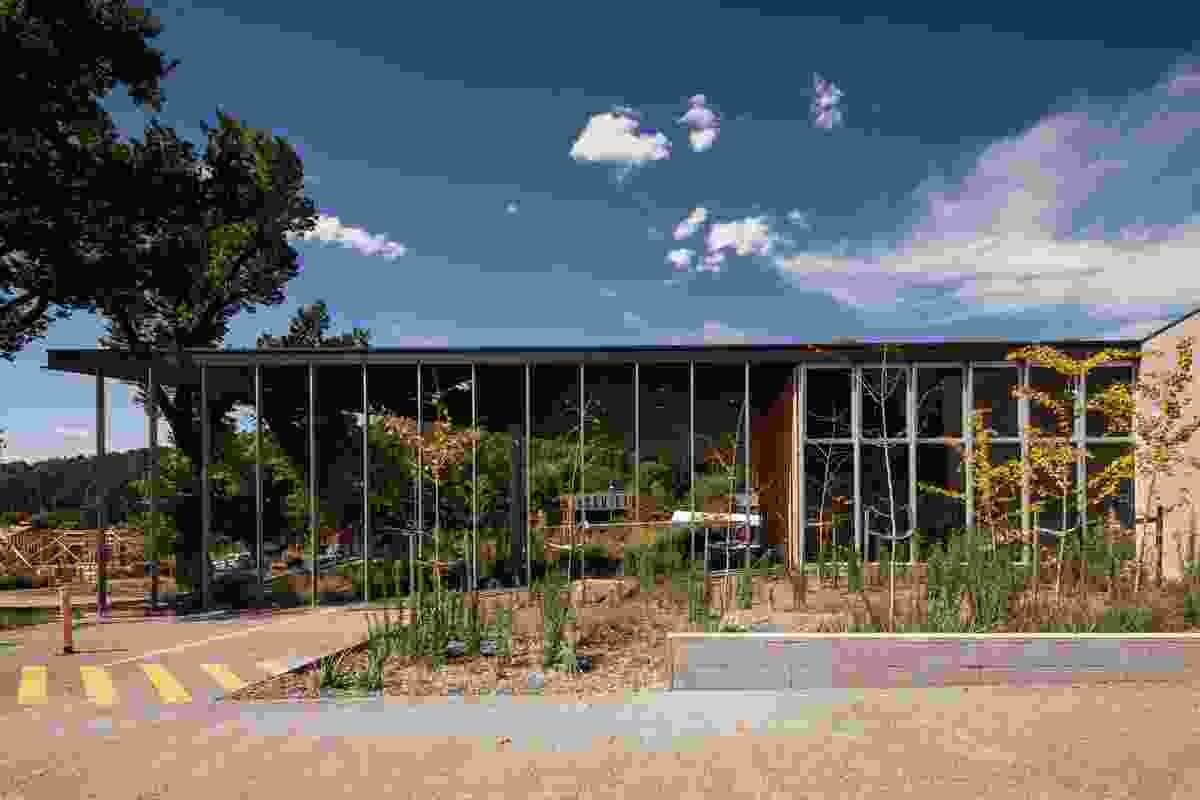 A long and low built form, the facility remains a modest presence in the town. 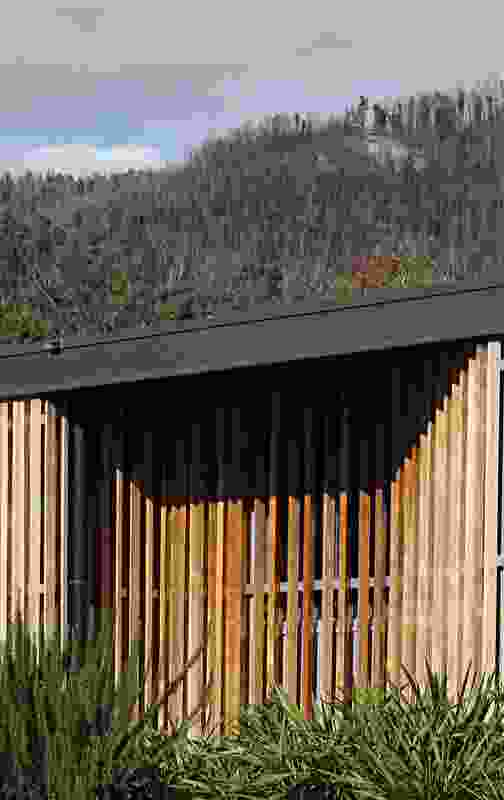 Timber palings are reminiscent of the trunks of the mountain ash trees scattered across the surrounding landscape. 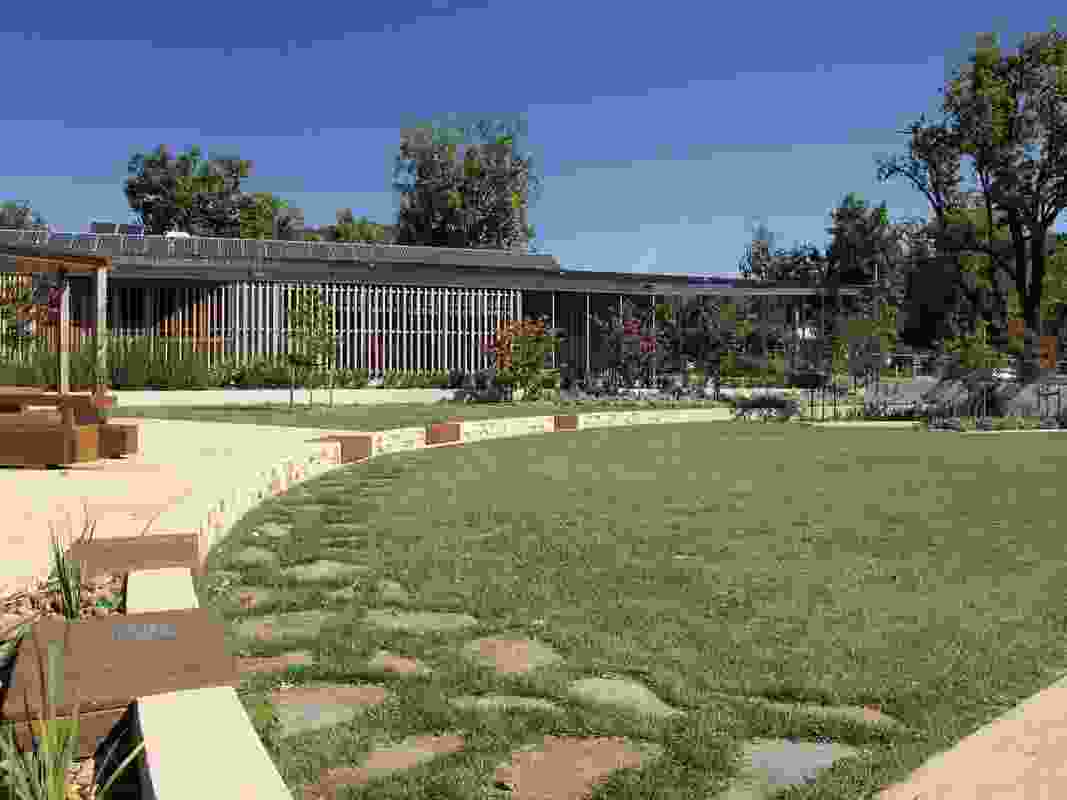 Along with the information centre and the town’s park, the police station completes the new civic cluster known as Marysville Heart. 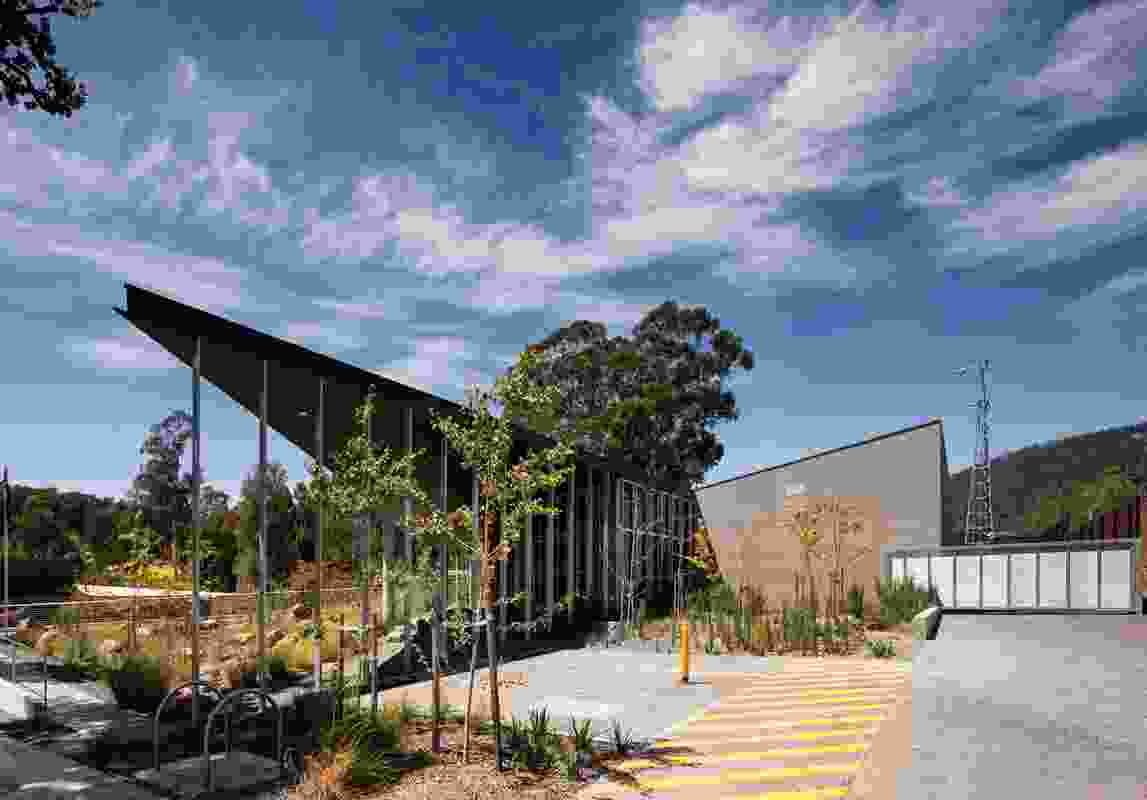 A sharply angled roof juts out towards the street and grades the project back into the site. 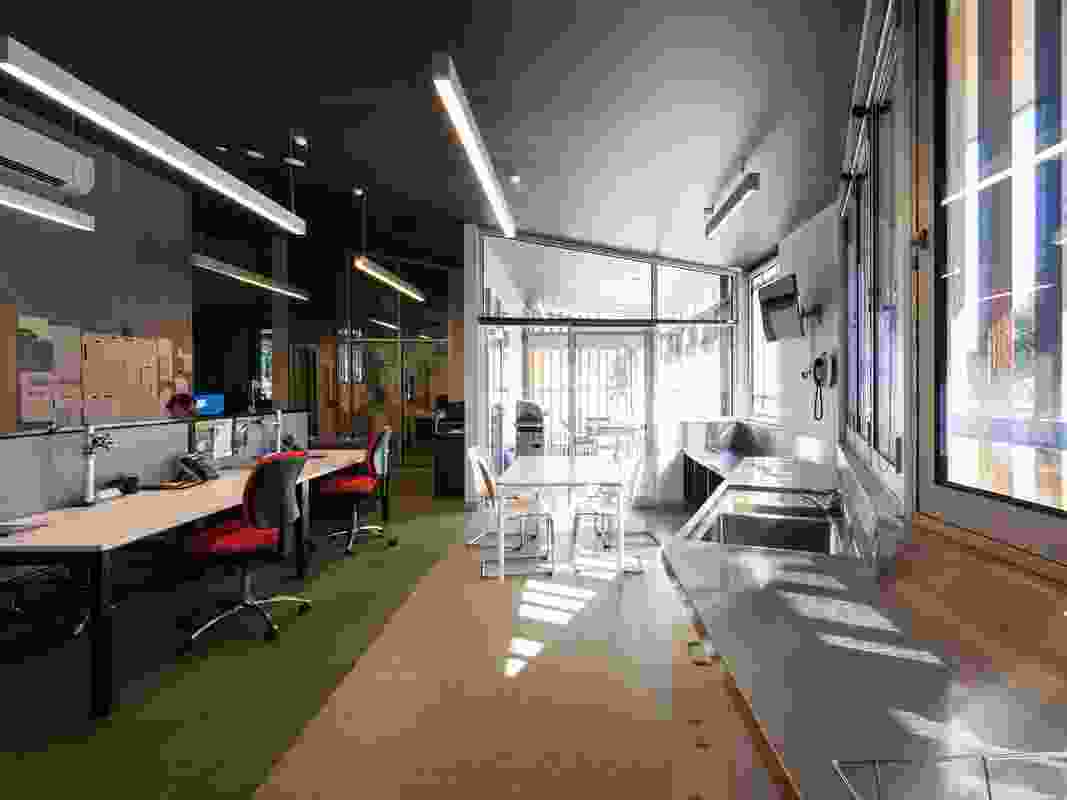 Interior spaces are designed to allow police officers views to different zones of the building – including sightlines from the kitchen through to the front desk. 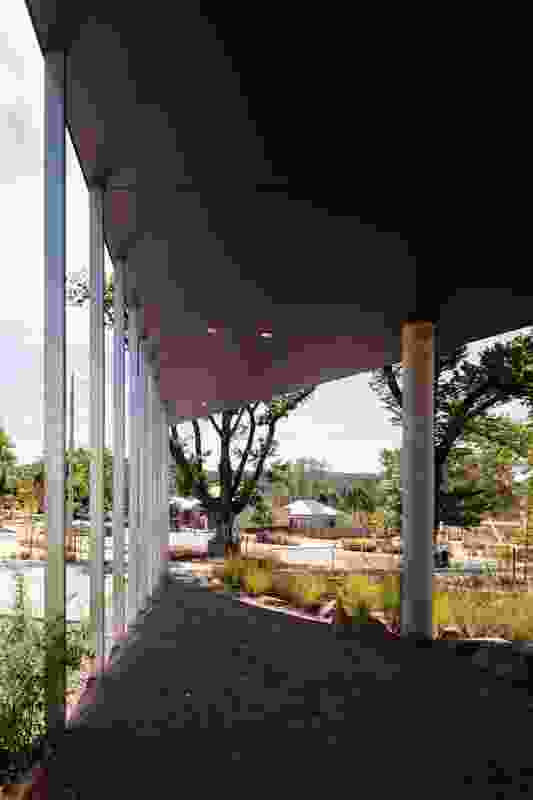 The angled canopy at the north-west edge of the site provides a shaded civic space suited to ceremonial and casual use.