All together now: Matraville Residence

Light-filled and airy, this dwelling by Tzannes re-imagines the suburban home and experiments with new modes of multi-generational living.

Elements of suburban living – swimming pool, garage, room for the children – have been incorporated without compromising on the quality of design.

Experimentation is at the core of innovation. In architecture and design these terms are often associated with radical aesthetics, bold colours and novel materiality. However, the real day-to-day innovations that improve the quality of the built environment and people’s lives tend to happen in a less dramatic manner, though with no less impact. The Matraville Residence by Tzannes is one such project that aims to test the status quo of suburban residential design. This house experiments with new planning regulations and new modes of multi-generational living as well as fundamentally questioning the future of the suburban block.

Matraville is in the eastern suburbs of Sydney, about nine kilometres from the CBD. Sandy and suburban, the area is defined by inter-war bungalows in varying shades of liver and red brick. Sprouting from the roofs of many of these bungalows are first-floor additions built to the boundaries. This type of housing leaves the residents with little visual amenity or acoustic privacy and limited access to sunlight and cross-ventilation. This was the case with the existing house on the site. The clients had lived there as a family – plus grandmother – for six years before deciding to rebuild. They liked the area and, despite the old house’s short comings, wished to remain part of the local community. Luckily for them, they didn’t have to worry about trying to decide on an appropriate architect, as they had a family connection at Tzannes. Mladen Prnjatovic, director at the firm, took on the project.

The budget was limited and the location an unremarkable plot in a typical suburb. This gave the Tzannes team the perfect conditions to experiment with its long-held hypothesis that suburban living does not have to equate to poorer amenity and design. The first stage was testing the potential of the new Complying Development Certificate process (CDC). Mladen says that for this project, the CDC process resulted in a better outcome than the traditional development application process might have, “unlocking a whole lot of potential.” The CDC allowed them to configure the ground floor as a giant east-facing U-form block, with two courtyards – one in the centre and one at the rear. Reminiscent of Spanish patio houses, this lower level is conceived as a masonry box, with the rooms opening onto either the central courtyard, such as the main bedroom, or both courtyards, as in the kitchen/living space. The double aspect of the living spaces provides wonderful light and cross-ventilation, with an incredible degree of visual privacy from the neighbouring house.

In contrast to the low-slung masonry base, the upper level has been conceived as a metal-clad pavilion. Its gable end pays homage to the suburban context and takes its cues in height from the neigh bours. It clearly stands out as a new development, but does not hog light and views and is respectful to its current neighbours, while also protecting the client’s amenity from any potential future developments. Dormer windows have been elongated to form giant pop-out hoods that open onto the inner courtyard. Their splayed reveals provide privacy as well as refracting the light that enters the rooms. This feature adds drama to the bedroom spaces, which are quite modest in plan but very generous in section. The upper level contains three bedrooms, a study and a large second living space.

Integral to the brief was the desire for a “multi-generational mode of occupation,” whether that be the clients’ children or parents. The upper living room currently allows the children to have their own space, while the lower living room can accommodate communal meals or act as a quiet zone for the client. One of the best aspects of the design is that a lot of people can be in the house at any one time without feeling as if they are on top of each other. This is an aspect that the clients and Mladen believe is key to successful intergenerational living, and here it has been achieved through ingenious spatial configuration. The clients comment that the house has “so many different zones to escape to” and all of them are “light and airy.” A reverse brick-veneer wall system was used on the ground floor, where the majority of the wall is shaded; all of it is painted white to reflect the sunlight and reduce the heat load. Upstairs, the construction is lightweight. Along with a mechanically assisted extraction system and consideration for cross- ventilation, the first floor remains cool in summer and warm in the winter months.

The Tzannes team believes that “design can add value at any pricepoint,” and Matraville Residence demonstrates that this can be achieved. The aim of this project was to “re-imagine suburban living” and it has been done in a way that allows for all the benefits of this paradigm – swimming pool, garage, room for the children – without compromising on the quality of design and amenity. Let’s hope more clients and architects take on this challenge, because the results of this experiment demonstrate that the suburbs can only get better.

All together now: Matraville Residence 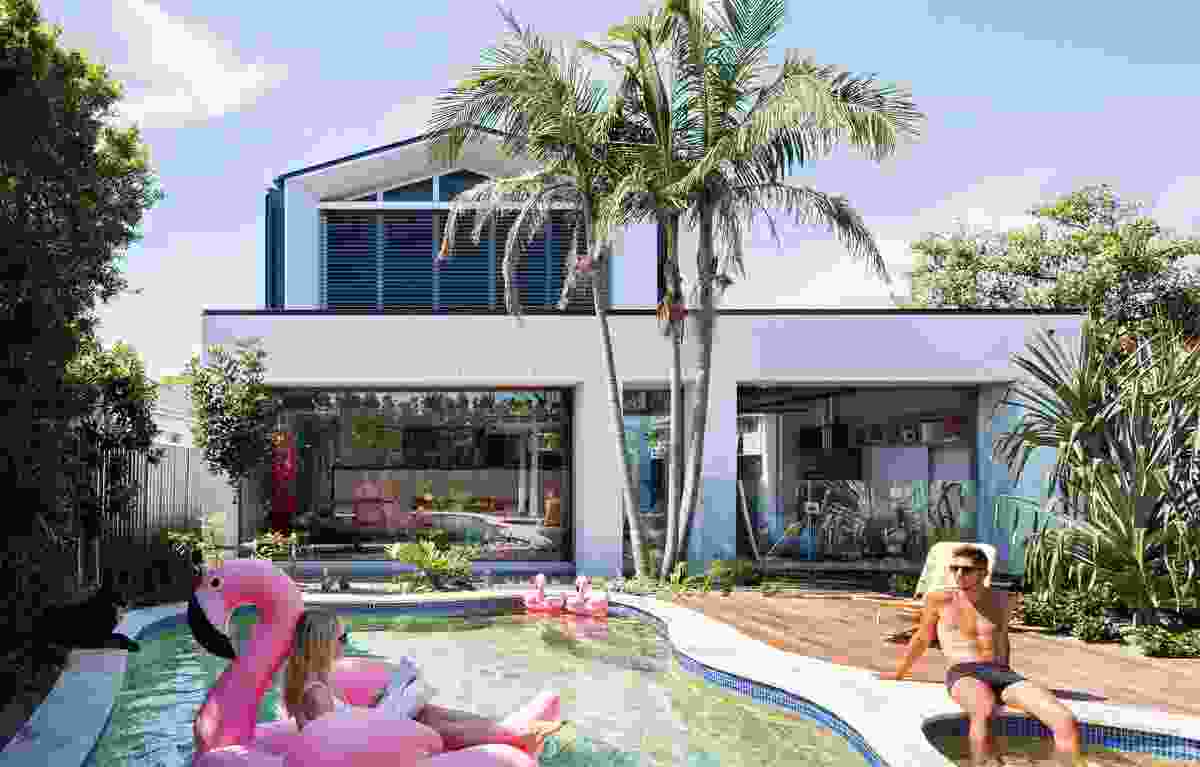 Elements of suburban living – swimming pool, garage, room for the children – have been incorporated without compromising on the quality of design. 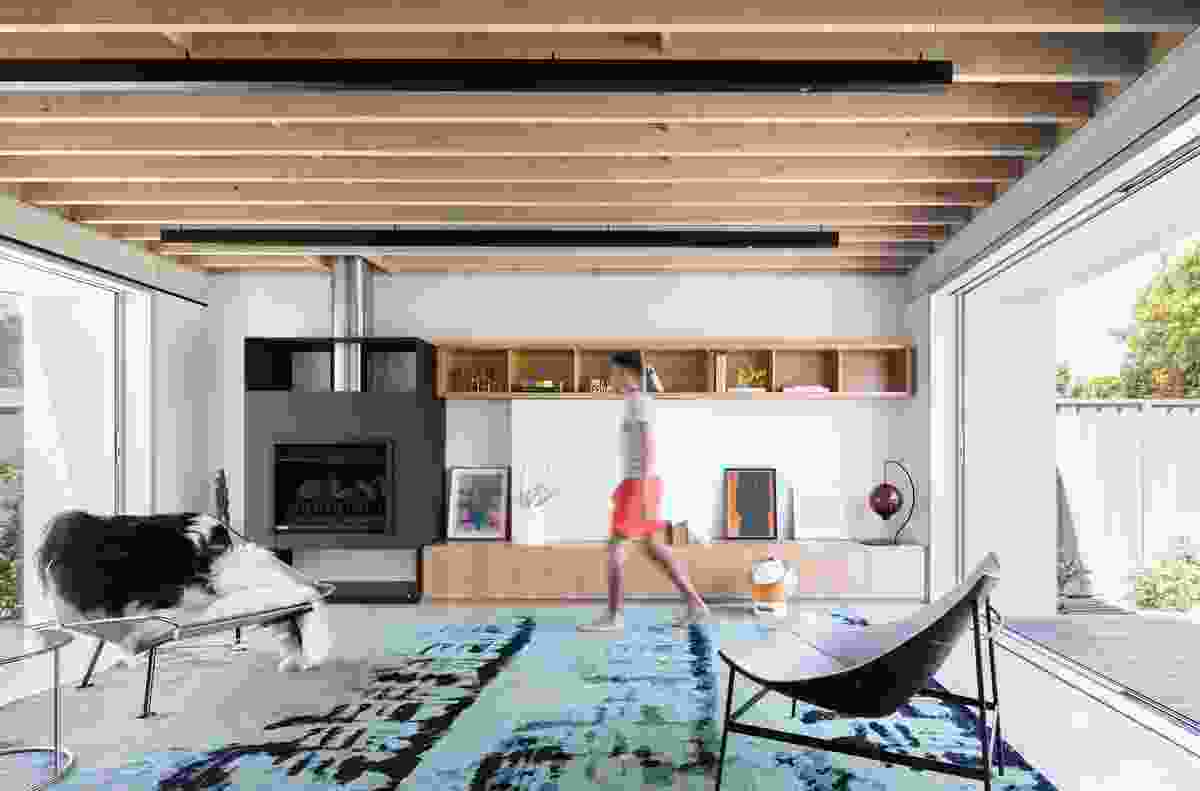 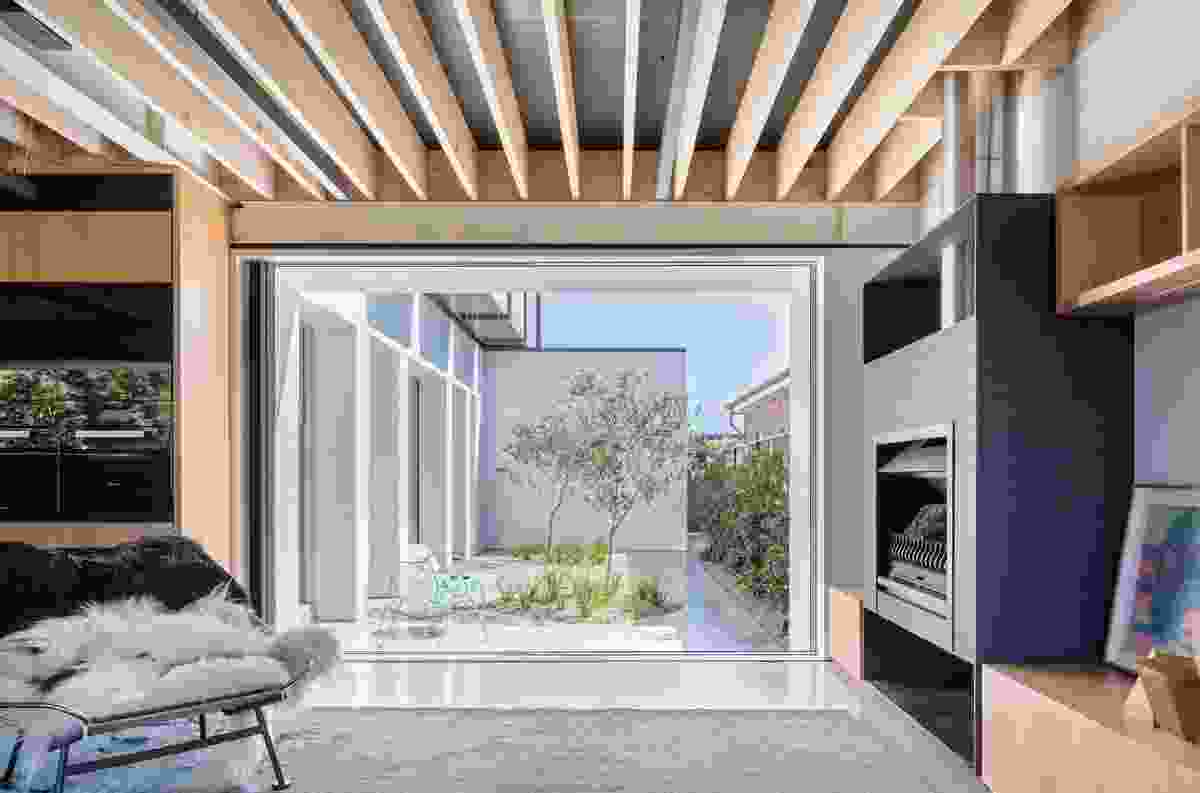 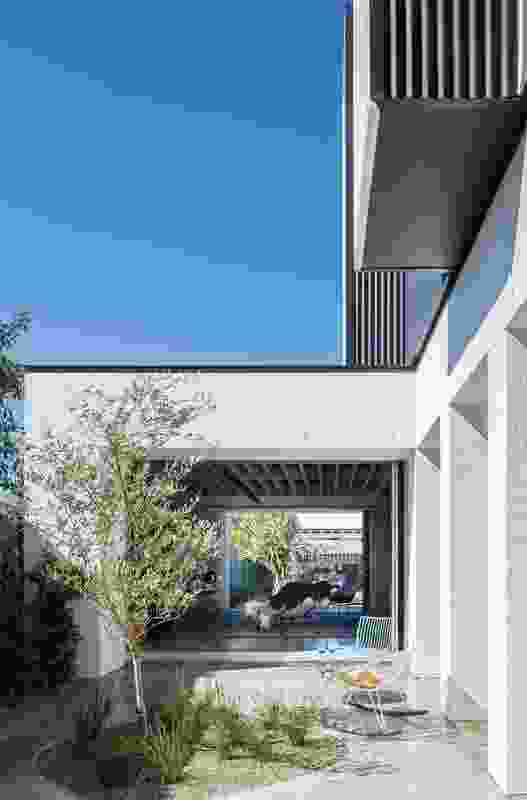 The lower level is in the form of a masonry box with generous openings onto the courtyard. 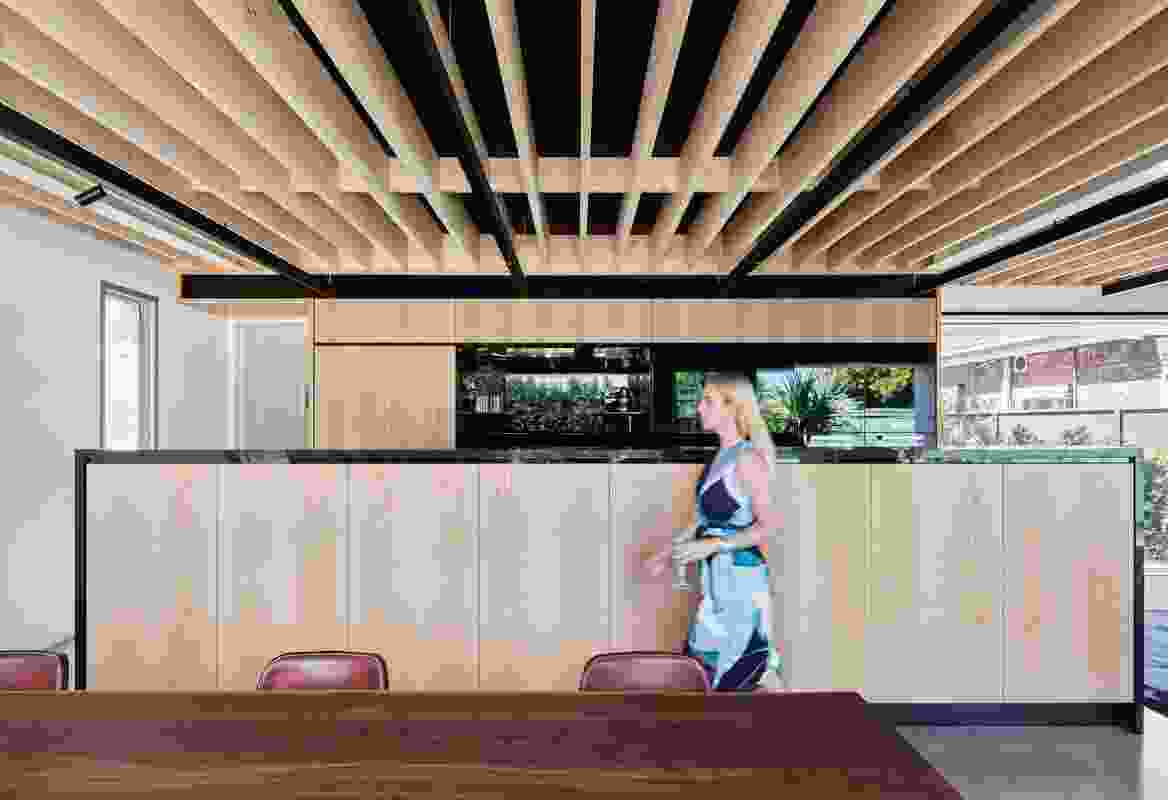 Exposed beams create a strong graphic element and enhance the sense of openness. 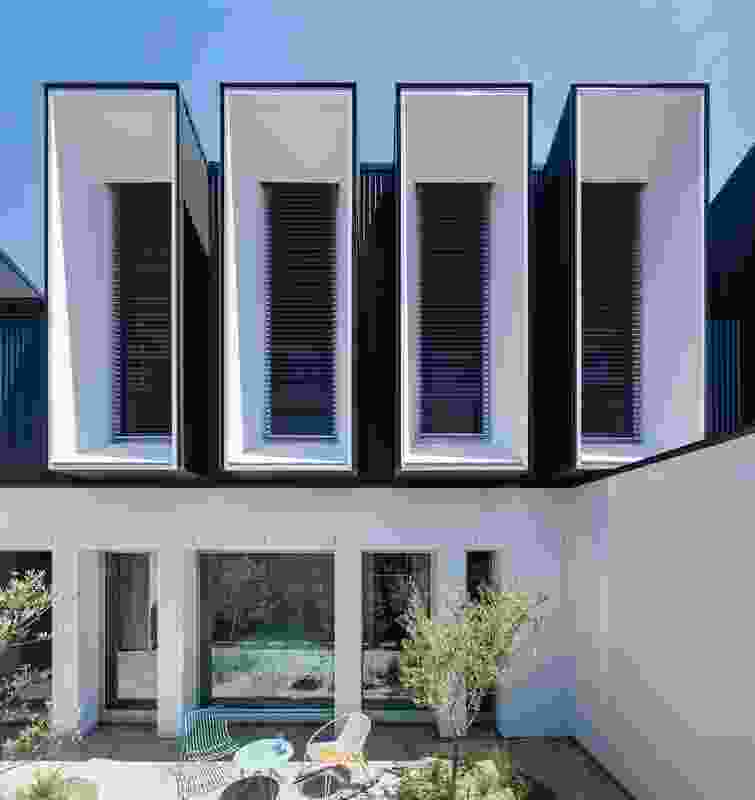 Elongated dormer windows on the first floor provide privacy to the bedrooms, while also adding drama. 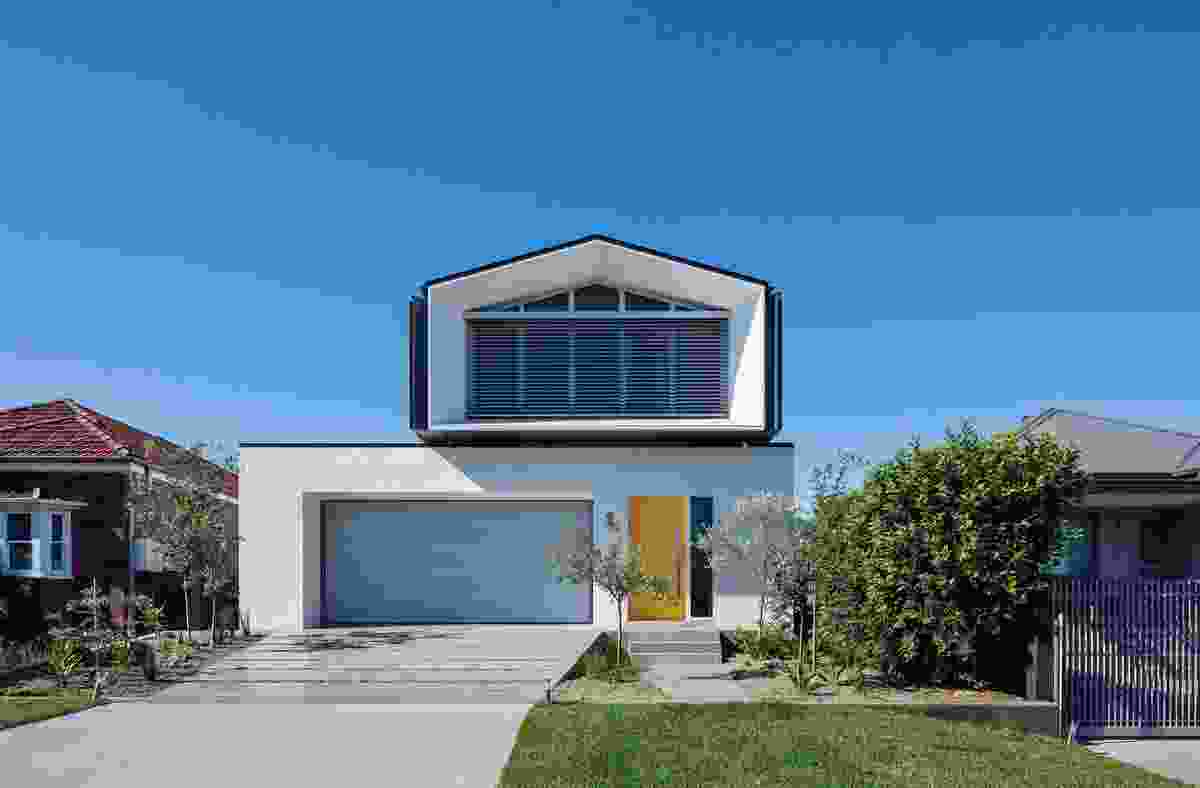 In contrast to the low-slung base, the upper level has been conceived as a metal-clad pavilion.