The work of Studiobird in Melbourne speculates on things outside the mainstream of architecture.

Alphaomega Apartment (2008) is a CBD apartment that takes in references ranging from Michelangelo to the red kangaroo.

Often you can drift away into some dead-end design trajectory and wonder how you got there. And then you might see something clever someone else does and get jolted back into the place where design excites, the dream world you wish was perpetual, that world of interest in the possibility of ideas with a physical energy and presence. Seeing Matthew Bird’s works collected together for RMIT University recently did that for me. Bird seems to live in an exotic design vivarium, from which strange animals escape.

Take the Hotel Otherworldly project, for example. About a year ago I came across this project, in which Bird executed a guerilla refit of a room at the Hilton hotel in East Melbourne. The act is remarkable in itself: rent the suite, transport the unassembled decor into the room in your luggage, decorate the room, photograph it, strip it and carry it out again in the suitcases, then post it online – hello! That said, the designed space is even more invigorating: here are explorations of surreal juxtaposition, junk and bling; of arte povera and visual opulence. Here are investigations into the nature of the interior as a field of intelligent study in itself, and that is a rare proposition these days. Bird takes the position that the interior can be liberated from its physical exterior but not the symbolic nature of the shell. The interior is not the servant, chained to modernist/conventional architectural dogma about the symbiosis of in and out. It is the other world of Lina Loos’s bedroom.

His work begins with elaborated gestures and the decorative and over-the-top, and it does not avoid the symbolic. In addition, in many of his executed design projects, he is the fabricator.

And there’s lots more. Bird’s work intuitively reflects a different set of interests to that of the mainstream of architectural design. For a start, his work begins with elaborated gestures and the decorative and over-the-top, and it does not avoid the symbolic. In addition, in many of his executed design projects, he is the fabricator. He is responsible for what Peter Corrigan might refer to as “dressmaking” in his three “Ds” of design (see the introduction to Cities of Hope Remembered/Rehearsed, Conrad Hamann, Thames and Hudson, 2012). Bird conceives of the work as a collaboration with the Bunnings emporium. It is there that he shops for golden underlay, pink bubble wrap and all manner of building stuff. He cuts it, drapes it and fixes it, creating a haven of contradictions, memories and allegories. The finished work is both familiar and new.

This strategic trajectory generates questions, which in the end is what I find interesting in Bird’s work. In the case of Hotel Otherworldly, the room is both real and yet only exists in the photo essay of its record. Is there any such thing as “real”? Clearly it is real. It exists/existed. In the Domed project, Bird and collaborator Michelle Hamer explore elaborations on the interior of an existing suburban house, not by changing the form but by inserting the imprints of a nonexistent dome within the space. The dome leaves its mark on the square wall and ceiling elements of the found-house. These surfaces are mosaiced, so to speak, with plastic caps, elegantly and stylishly, slick black on white but in such a way as to belie the trashy nature of the bottle tops and the plasterboard walls. This work is remarkably fresh.

Each of Bird’s projects poses questions about the range of strategies that might be available to the architect, and this is important at a time when much other work is just interested in nice lifestyle. Happily, his projects always contain strangely Jungian shapes and hanging things, stuff stuck on, draperies of plastic or trinkets made of square nuts. The careful doily of trays stuck to the soffit in Neervana Haven or the hubcaps fixed in cruciform in the Alphaomega Apartment revitalize my own contemplations on the act of transforming the discarded into the valuable something. It has the smell of alchemy. The transformations go on right through his work, culminating in the almost offensive Forever Gazebo. Here is a potent totem, but it is covered in toxic “fur.” Is it a bat? To some extent I view Bird’s way of working as akin to that of an installation artist, but his work exists within the argot of architecture, and is therefore relevant and instructive to us. For example, he does not render “found” material as the detritus of daily existence (as do artists such as John Bock or Thomas Hirschhorn) but remodels it into something hopeful.

Historically, and by Bird’s own admission, the work clicks into the lineage of decorative modern design. His PhD treatise lists a range of influences and inspirations. His unacknowledged influences go to 1930s to 1970s Australian decorative design in graphics, fabric and industrial design. One warms to the family resemblances to the work of Frances Burke or Douglas Annand. His work is local but it is also inspired by Italian designers from the 1920s onwards such as Carlo Mollino and Giò Ponti, but also by pop designers like Verner Panton. This tradition is too often overlooked in the mainstream of architectural gaze in this country. One looks to the work of these Italian masters seeking lessons in the slippage beyond the purity of razionalismo into the energetic sensorial quality of Italian pop design. Bird is exploring these effects within a world of digital imagery and consumerism.

Bird also works in set design for the performing arts. His work with contemporary dance company BalletLab is enigmatic, but entirely appropriate to the performance theme of the works. One must see the dance work Aviary to understand how his design of the strange teepees fits the revolutionary conceptual themes and visual effects of the choreographer, Phillip Adams.

I could go on. Matthew Bird’s work operates without aggression – he seems to be simply asking pointed questions through a process of “what if … ?” He has topical interests around recycling or adaption. In this age of diminishing opportunities for younger designers, he invents his own projects, but not as commercial kites. They are speculations about the nature of the space, of the elaborated surface, about the potency of symbols, about the contradiction of scavenged luxury. Indeed, he seems to be exploring things in architecture that hardly anyone is thinking about. 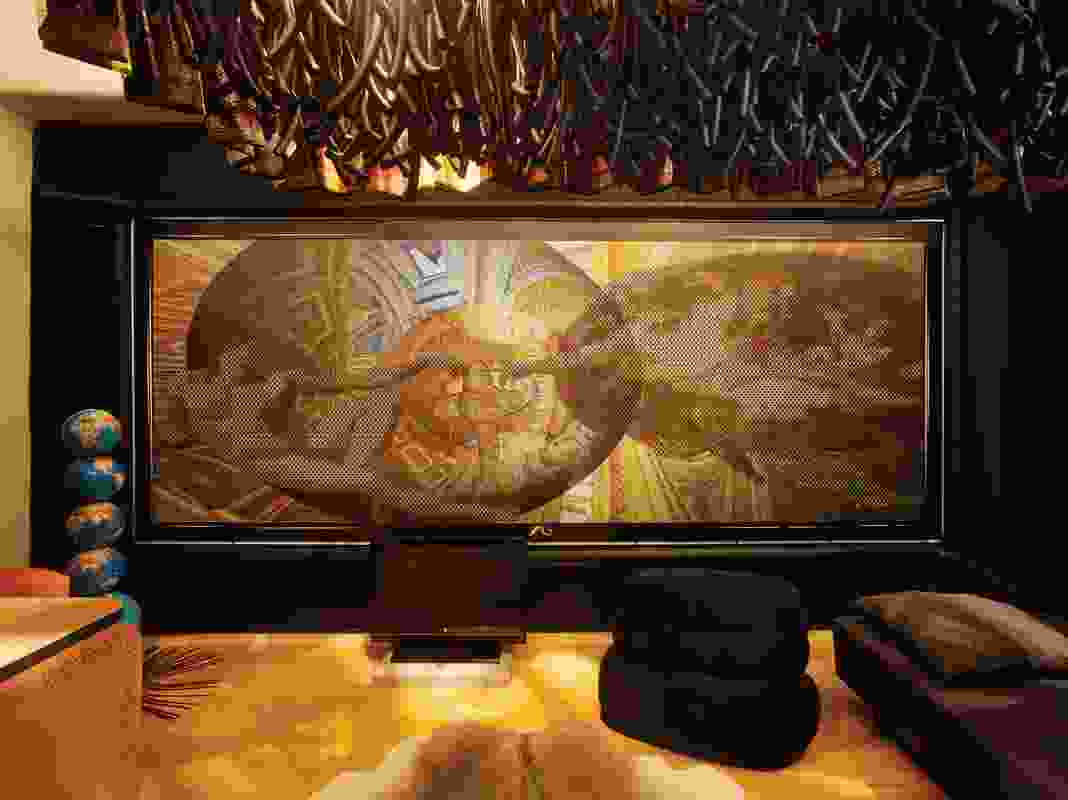 Alphaomega Apartment (2008) is a CBD apartment that takes in references ranging from Michelangelo to the red kangaroo. 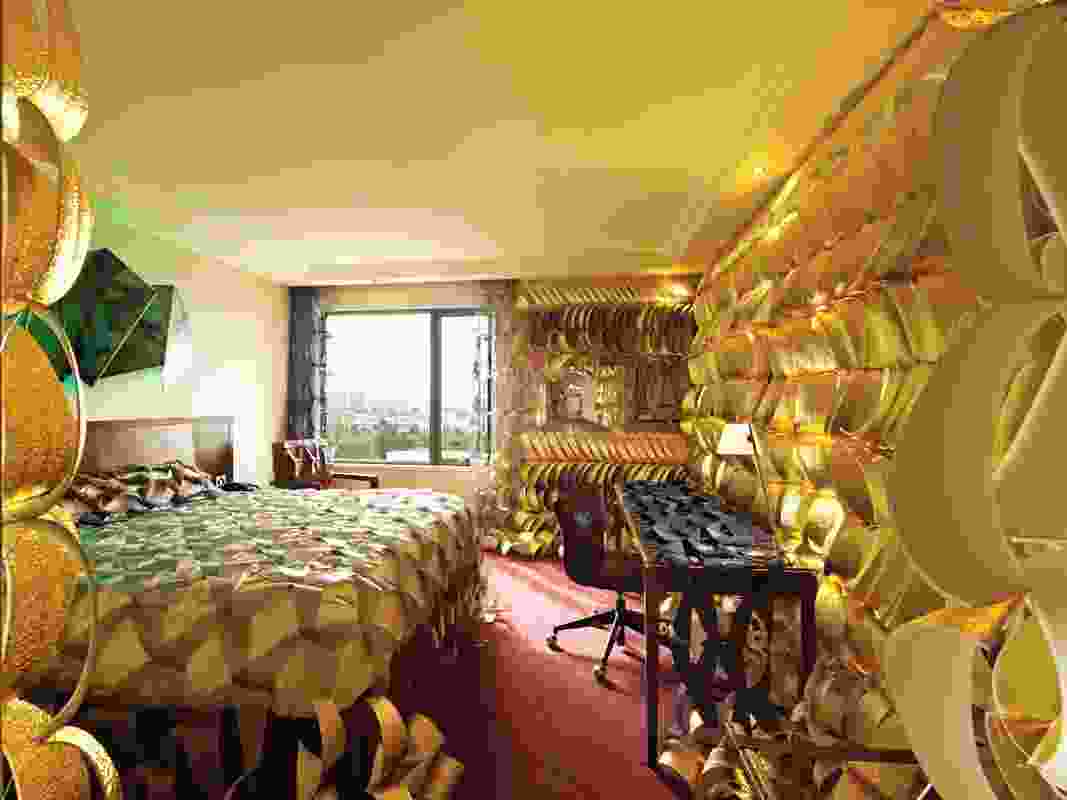 The Hotel Otherworldly (2012) tranforms a tired hotel room into a shimmering wonderland. 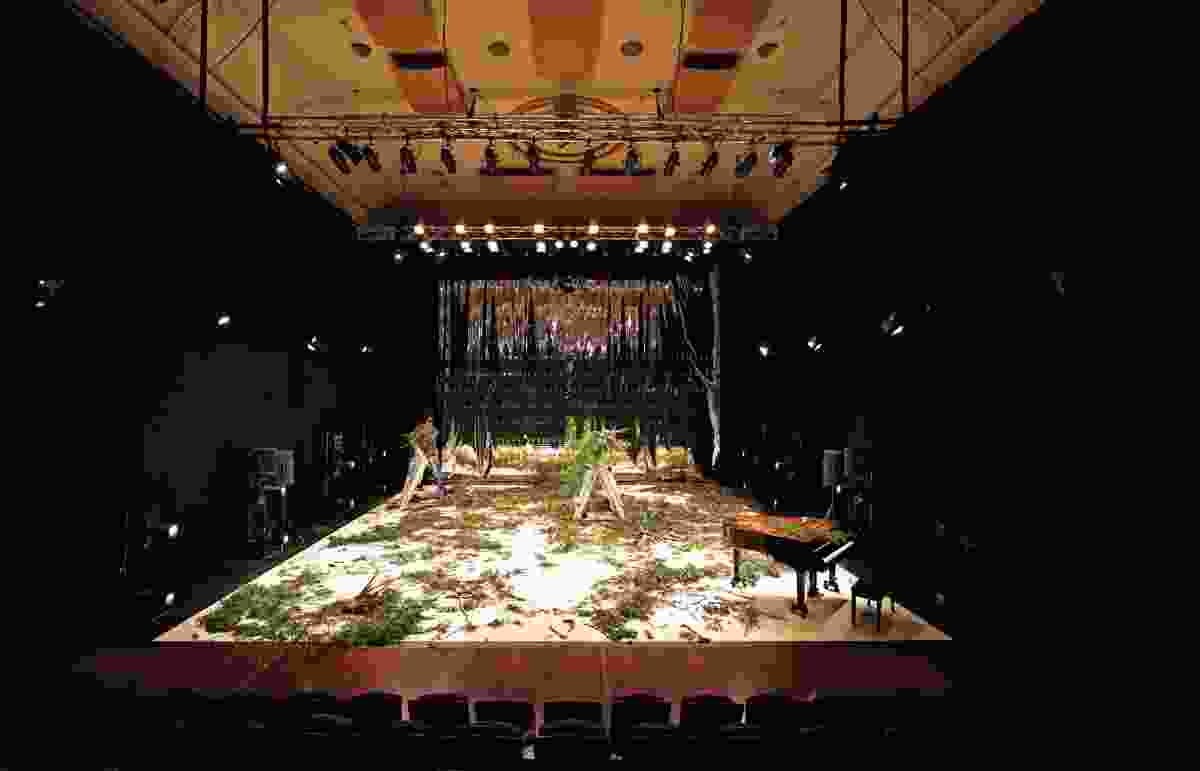 In Aviary Paradis (2011), a jungle paradise, including bowerbird nests made using urban materials, was created as a backdrop for a dance performance. 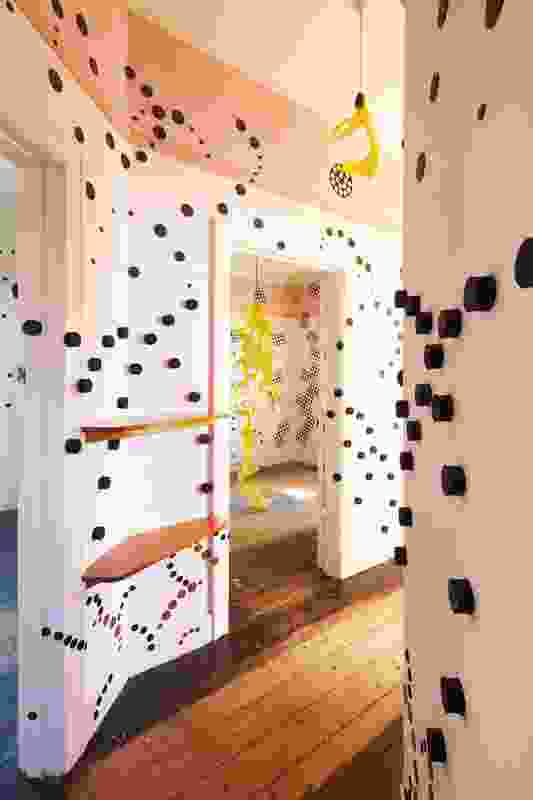 Domed (2010), a collaboration with artist Michelle Hamer, treats a domestic space as an ornamental dome. 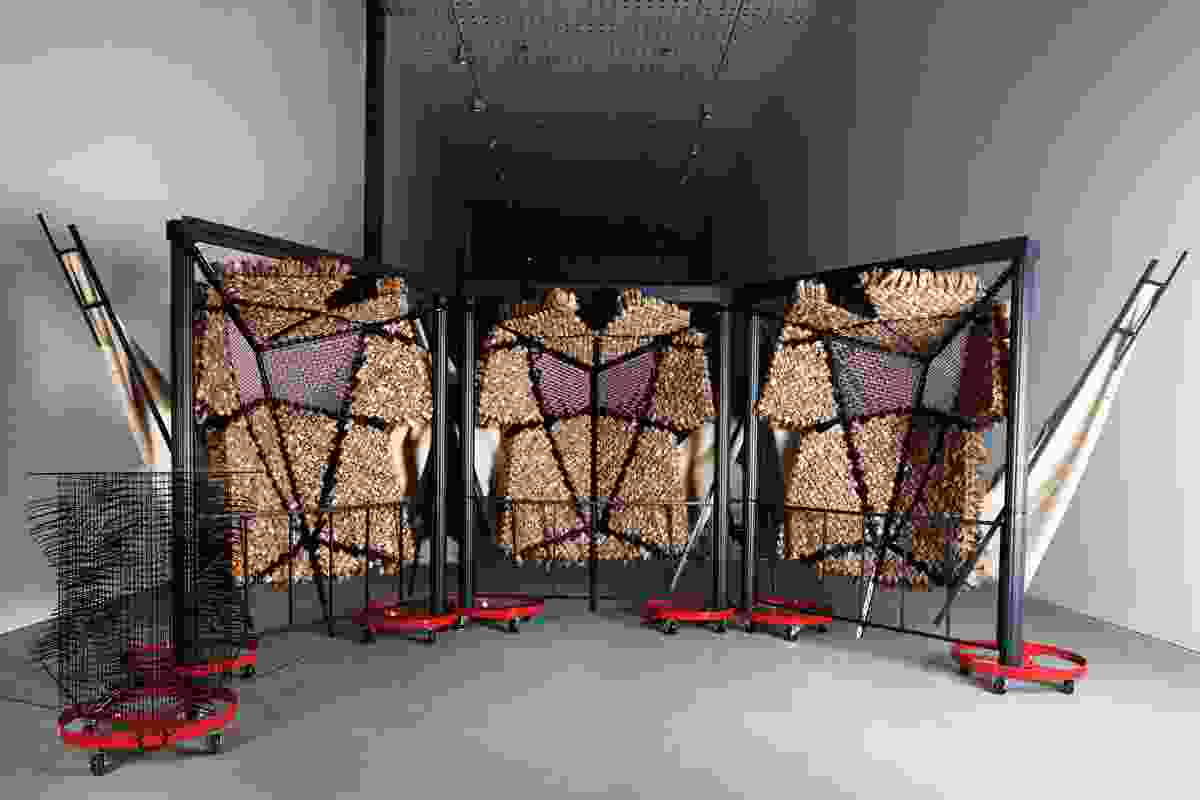 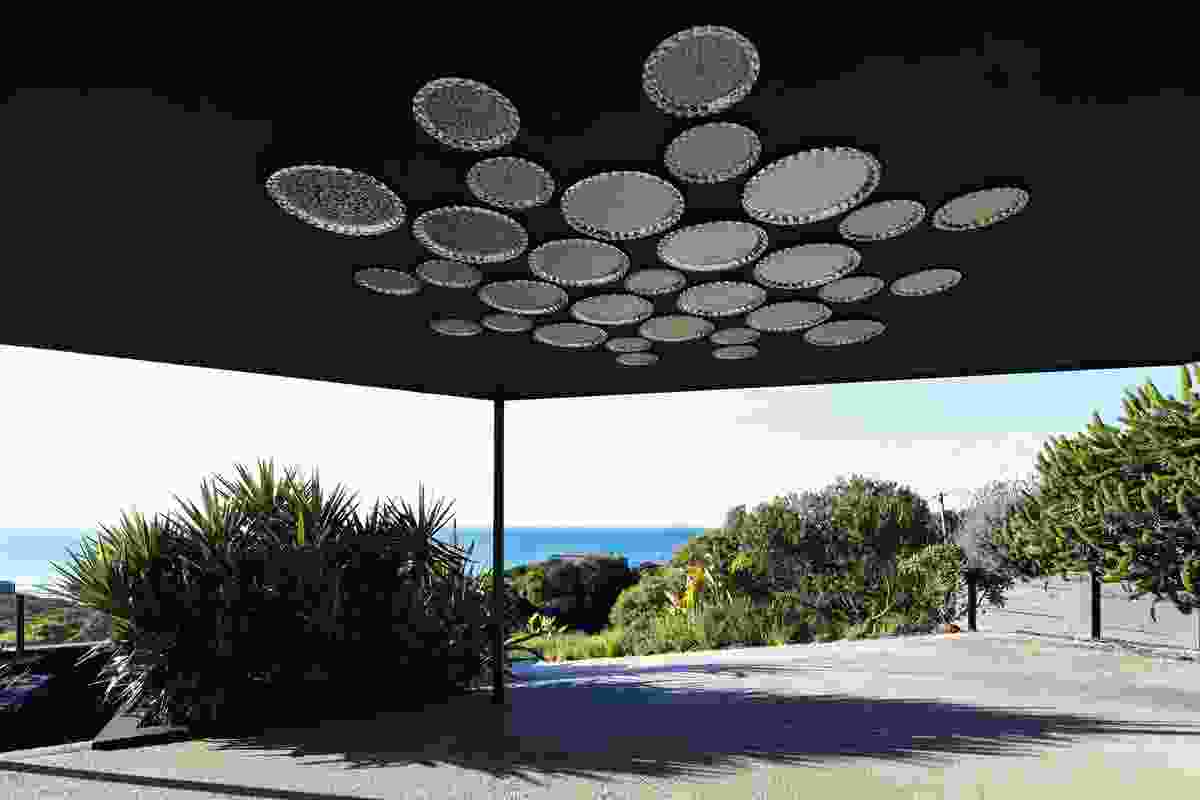 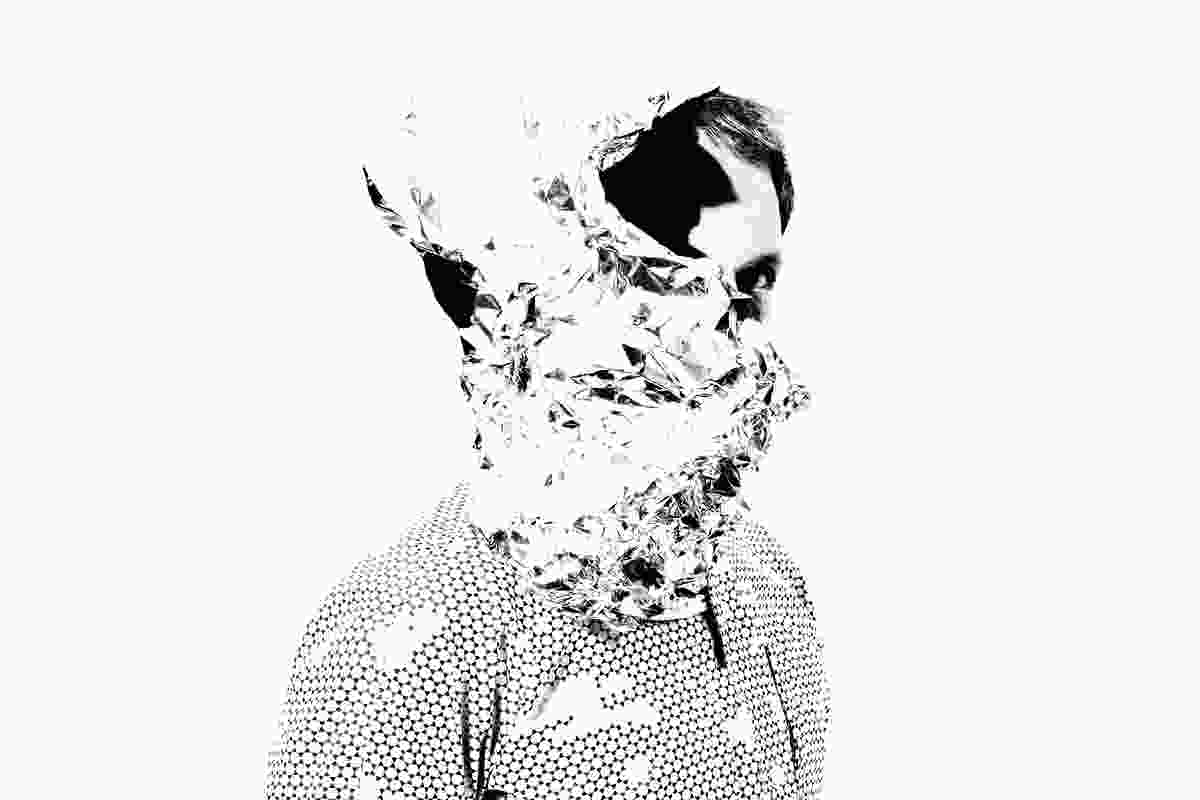