With a visually intriguing facade that challenges the masked frontages of neighbouring dwellings, this clever home by Jackson Clements Burrows Architects is characterized by light, shadow and texture.

A polycarbonate skin fixed behind the facade perforations allows light to pass through, creating a radiating box and visual intrigue.

One could be forgiven for assuming that the residents of May Grove house like their privacy. Sweeping in off the corner of a busy residential street in the Melbourne suburb of South Yarra, the dwelling challenges the masked frontages of the properties that soldier alongside. Sited among a series of single-storey twentieth-century bungalows, May Grove reinterprets its site conditions and explores alternative streetscape opportunities.

The site, previously occupied by a 1930s red brick cottage, was originally fronted by a high fence in a style similar to those that still flank the latest addition to the street. Faced with this context, Jackson Clements Burrows Architects sought to reconsider and redefine the ways in which the new house might challenge the existing street facade.

The building’s ground-level frontage was born out of the clients’ desire for an enclosed garage. Working with an existing driveway, the architects’ design for the house quickly evolved and questions surrounding how a street-facing garage can be both engaging and enigmatic became pertinent. The facade, clad entirely in a sealed fibre cement sheet, takes colour inspiration from the large silver gum on the property behind. The frontage is set back from the street, creating a forecourt directly off the footpath. Large custom perforations mark the entire width of the facade’s lower half, giving identity to the hinging garage doors, while a polycarbonate skin fixed behind the perforations allows light to pass through, creating a radiating box and visual intrigue.

A second driving force behind the design was the clients’ request that the new house be split across two levels. This led to explorations into how the building as a slender volume might occupy the site’s two hundred and fifty square metres. Early iterations explored spanning the ground floor across the entire width of the site before it was realized that an external corridor could act as entry circulation and opportunity for an incidental landscape. Across both levels the facade is pulled away from the eastern boundary, where a border of recycled red bricks stands referencing the original dwelling’s footprint. Between the facade and boundary wall, a footpath of timber runs the entire length of its north–south orientation and is interrupted only by the front door (or external entry gate). In its simplistic yet distinctly recognizable form, the southern street elevation becomes a precursor to the ensuing minimalist forms within.

From the timber walkway, the home is entered through a sliding door on the east facade that takes you into the middle of the plan, where the kitchen, dining and living areas are immediately revealed. The clients (who have previously lived in warehouse spaces) shared with the architects their vision for connectivity between spaces, and in response to this the home is sequentially planned as a series of zones within a larger volume. Centrally positioned above the ground-floor dining zone as a means of informal spatial definition, a rectangular void is cut through the ceiling in an impressive display of height. Its loftiness is veiled in sheer, white fabric that tracks around the plasterboard perimeter, offering discretionary privacy to upstairs and establishing a dialogue between the lower level and upper retreat.

Below the void, along the western boundary, a small planted courtyard protrudes into the dining space, inviting the landscape into the living zones and encouraging morning, midday and afternoon sun to filter into the ground floor from its north, east and west elevations. The architects saw the aspect of the narrow site as an opportunity for the home and its inhabitants to be continually immersed in the landscape.

Climbing the American oak stairs to the upper level, you realize for the first time the play of shadow created by the first-floor perforated facade screens. Casting spheres of light in often elongated proportions, the pristine surfaces of white plasterboard become a canvas for a ritual of travelling sun. Bathroom and storage services are located off the upstairs corridor, while the main and guest bedrooms are located at either end, with perforated and operable screens facing north and south respectively. These large fenestrations offer cross-ventilation and audible associations with the familiar sounds of life in the suburb below and local tennis court behind.

Between the two bedrooms, along the eastern facade wall, a narrow skylight is carved into the ceiling, bathing the corridor in alternating sun and moonlight. Around the void to the north over the dining zone, the main bedroom is wrapped, its robe and sleeping zones leading off the circulation bridge.

Built around connectedness and quality of space, May Grove invests in the value of good design. With a restrained palette grown out of site references and opportunities, this project quickly became about light, shadow and texture, and the celebration and definition of the volume. The result is a considered yet bold approach to a reserved streetscape where others might have sought more of the same. A polycarbonate skin fixed behind the facade perforations allows light to pass through, creating a radiating box and visual intrigue. 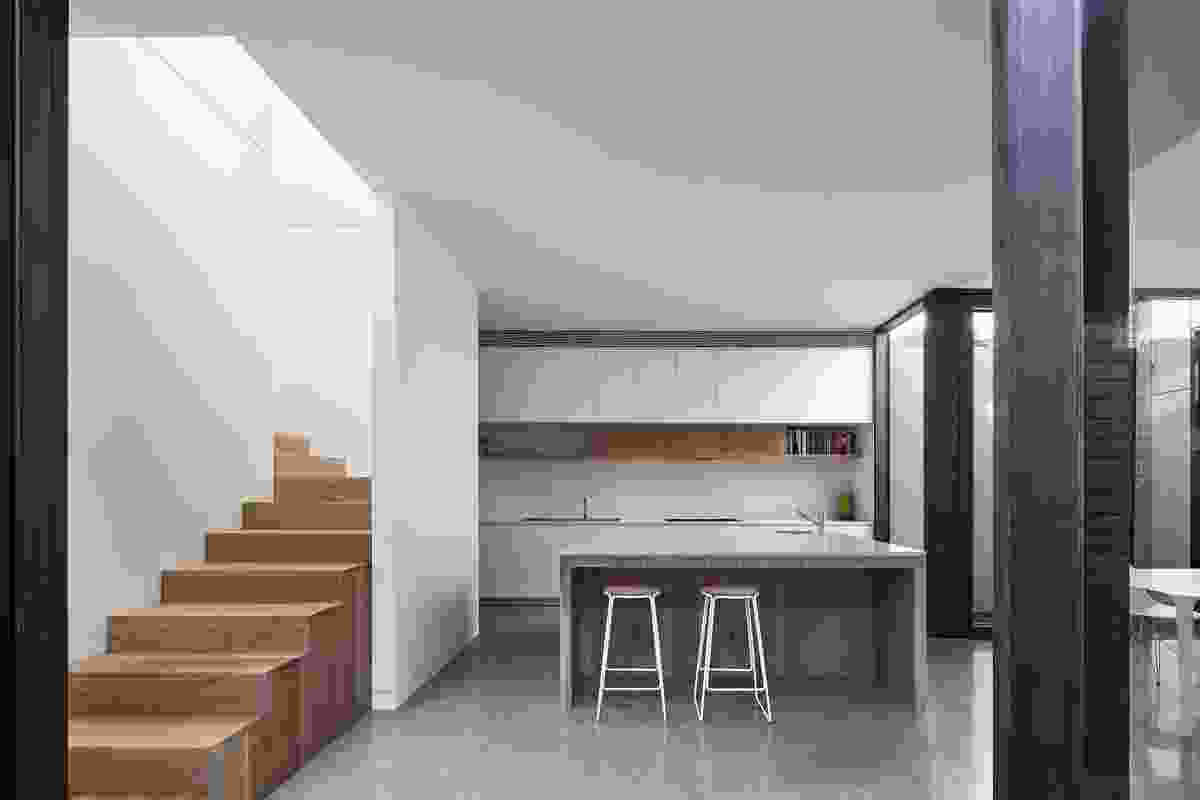 The ground-floor kitchen and living area are structured as a series of zones within a larger volume. 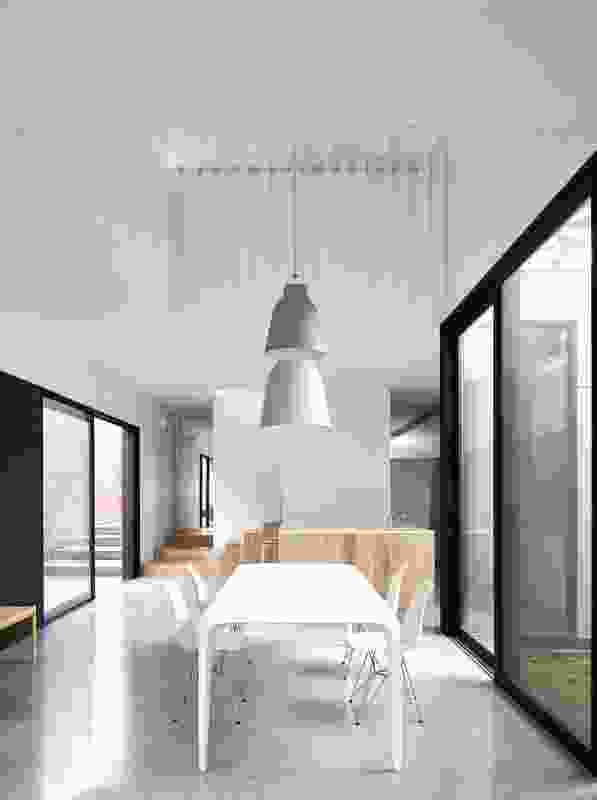 A rectangular void is positioned above the ground-floor dining zone as a means of informal spatial definition. 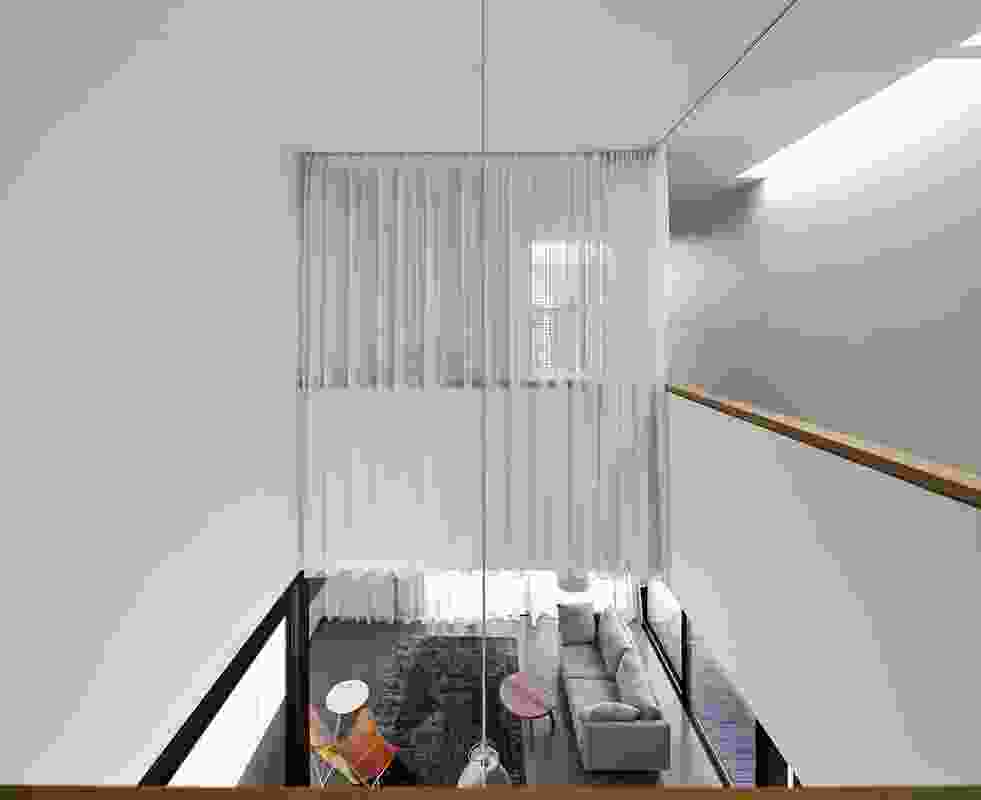 The void is veiled in sheer, white fabric that tracks around the perimeter, offering discretionary privacy. 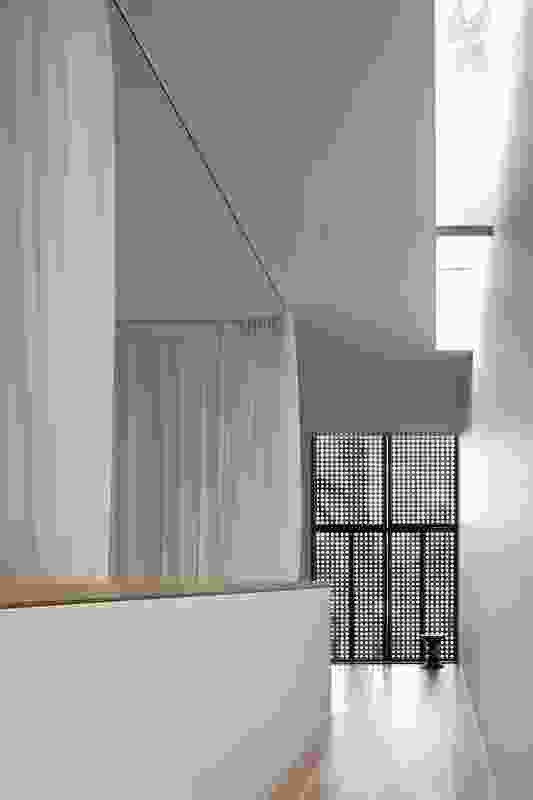 A perforated screen on the first-floor facade and a narrow skylight cast streams of light onto the pristine interior surfaces. 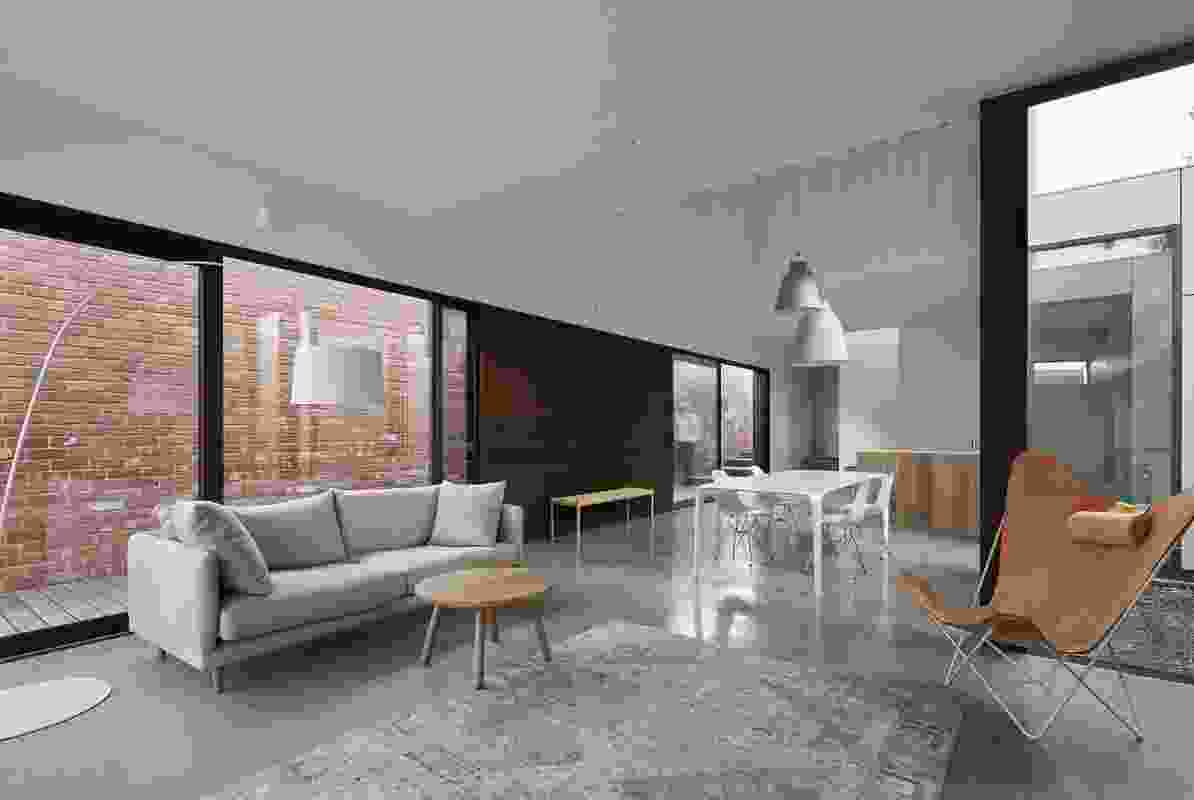 Across both levels the facade is pulled away from the eastern boundary, where a border of recycled red bricks stands referencing the original dwelling’s footprint. 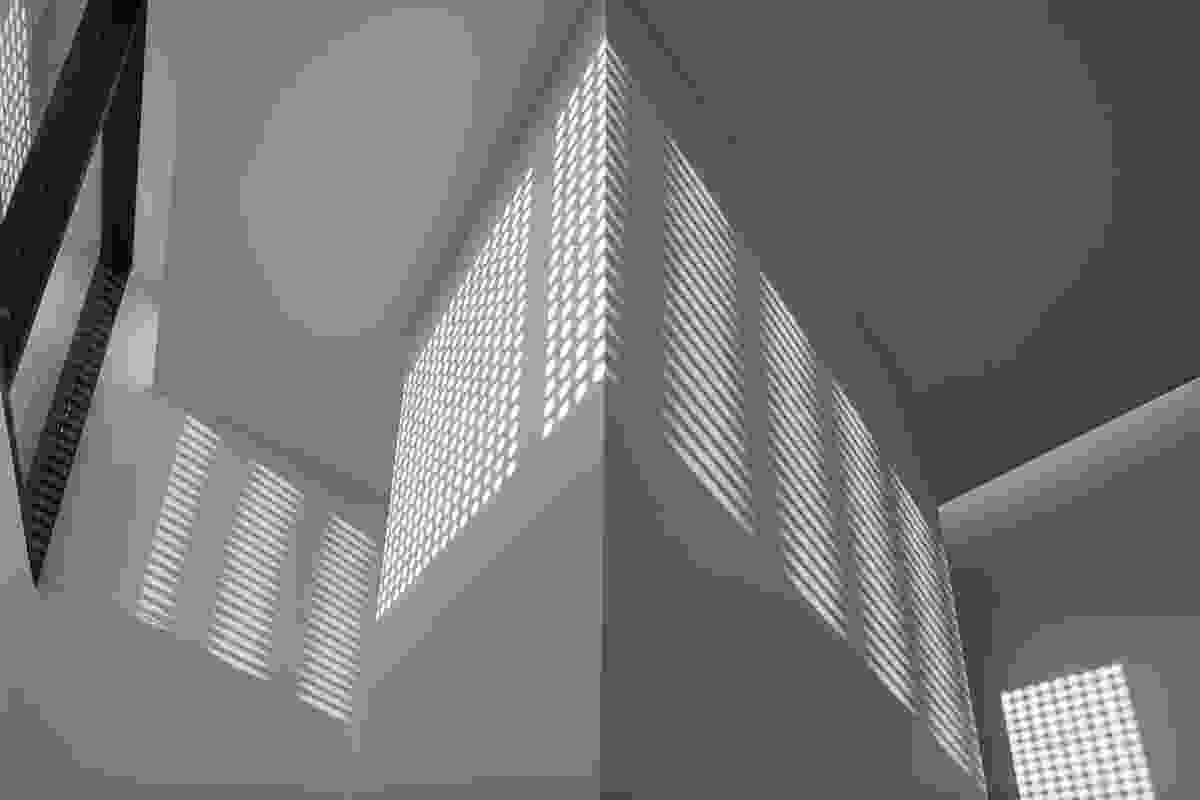 May Grove is about light, shadow and texture. 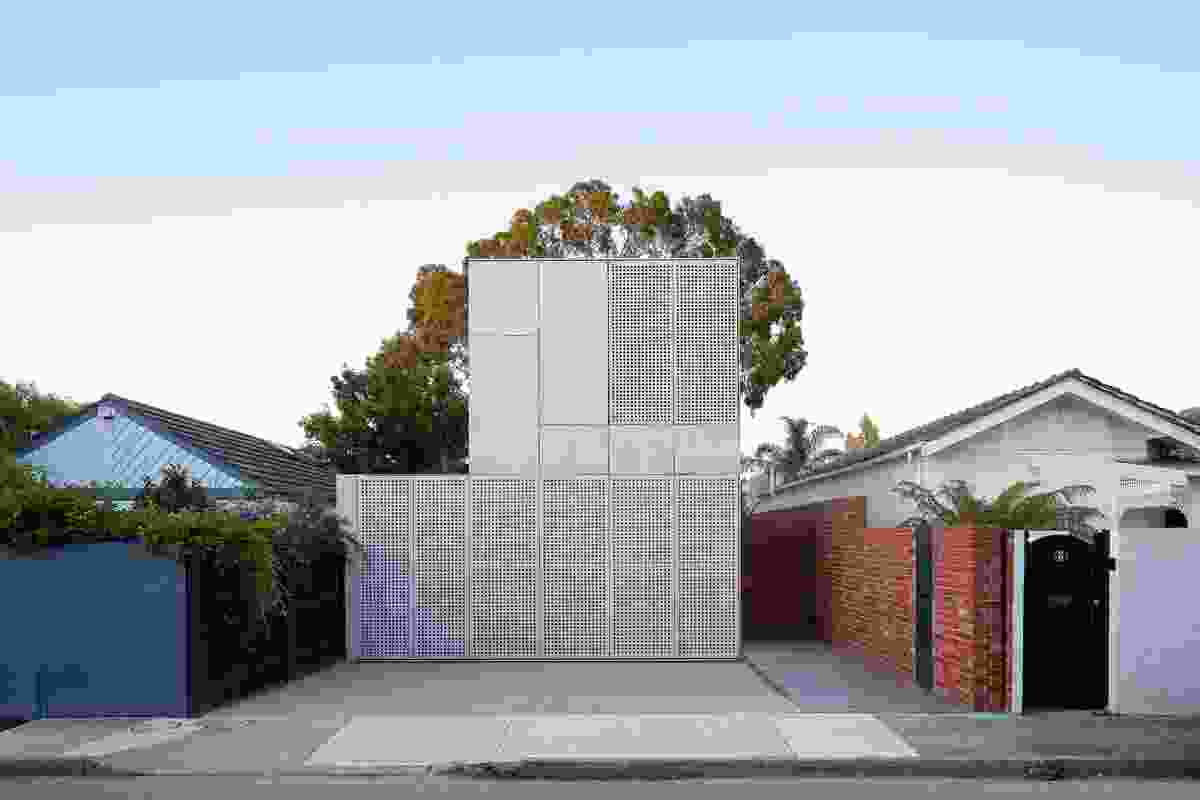 The facade, clad entirely in a sealed fibre cement sheet, takes colour inspiration from the large silver gum behind it.