Hassell’s new headquarters for healthcare giant Medibank delivers a vibrant and health-centred workplace while being a hospitable neighbour to stadium-goers.

The central atrium redefines the height at which a vertical void can be used to connect a workspace while remaining humane and legible.

In Medibank Place, Medibank’s new Docklands headquarters for client Cbus Property, Hassell’s multidisciplinary team of architects, interior designers and landscape architects wanted to create the healthiest workplace in the world. They also needed the new space to support Medibank’s transformation from a government-owned health insurance business into a privately owned integrated healthcare provider. Medibank’s CEO George Savvides is quoted as wanting “a living, breathing, healthy building.” So how does Hassell’s building live up to such an aspirational brief and how did the design team go about meeting the client’s expectations?

Adjacent to Melbourne’s Docklands Stadium, the location immediately conveys the right messages about physical health. The triangular site is a narrow wedge between Bourke Street and Cbus Property’s new NAB headquarters, which addresses a new raised pedestrian concourse from Southern Cross Station to the Docklands Stadium. On a regular event day up to forty thousand people may traverse this precinct. On a daily basis, 75–80 percent of Medibank’s staff arrive via Southern Cross Station and their entry experience begins with a public park that terraces up and over a cafe facing the pedestrian link. The lobby, entered off the park, is planned so that employees walk the length of the site, past Medibank’s ground-floor hospitality spaces (including a cafe and formal and informal meeting spaces) as well as outdoor space overlooking the concourse where Medibank staff interact with external visitors. Along the way visitors and staff are treated to views through the atrium to the workspace, which is beyond the security turnstiles.

Public access to Docklands Stadium involves a level transition between the bridge from Southern Cross Station and the stadium. The design team worked closely with government departments including Places Victoria (formerly VicUrban), the City of Melbourne, the Office of the Victorian Government Architect and the Victorian Department of Transport, Planning and Local Infrastructure to create a quality urban experience. A large canopy made of ethylene tetrafluoroethylene (ETFE), a material known for its corrosion resistance and its hardiness in extreme temperatures, provides weather protection and shields pedestrians from downdrafts. While the complex level transitions have created some compromises, cafes lining the sloping walkway to the stadium entry provide activity and interest. Two public links through the building connecting Bourke Street with the newly created concourse are aligned with the surrounding streets. Bold green panels on their walls highlight these public passages against the podium’s otherwise neutral palette.

At the stadium forecourt, the building form “cranks” to frame a new public space that is already heavily used at lunchtimes. North-facing timber bleachers provide seating, while the addition of a large screen on the stadium has created Melbourne’s newest outdoor public event space. Overlooking the space from Medibank’s entry level is a multipurpose court, communicating the company’s commitment to physical wellbeing, along with an edible garden with outdoor social facilities.

The workplace itself has been designed to promote healthy living in all its dimensions: physical, emotional and social. The plan encourages movement through the office and between floors to maximize the physical activity of staff. On arrival at the ground or Bourke Street entry one is greeted by a large lobby, framed by two five-storey green walls, instantly proclaiming the building’s “green” commitment. Inside the lobby is a spiralling ramp that provides bicycle access to the end-of-trip facilities on level one. This level, aligned with the stadium access path, also has a second lobby for the building’s subtenants, who occupy the top six floors of the building. The winding ramp continues up to Medibank’s reception and lobby level, which is at this point raised above the stadium access route.

Hassell has created a 2,800-square-metre, boomerang-shaped linear floor plate on the north of the site, with an “exploded” side core on the southern Bourke Street frontage providing an excellent connected workplace. The two wings of the “exploded” core frame the project’s defining moment, a twenty-storey atrium, with floor plates that shift in and out. Rob Backhouse, managing director at Hassell, explains that the alternating floor plates help “to avoid a monotonous vertical space through the building and create a more intimate two- and three-storey scale.” Each floor has two stairs, connecting to the levels above and below. Stair locations have been designed so that they are on natural paths of travel and thus become easy transitions between levels. The atrium edge and stairs have tall, curvilinear white balustrades, creating a sense of security in the tall space while encouraging travel and exploration through the space. One stair seamlessly connects with another, making the experience of moving through the atrium a delight. The bold use of pastel colours on each floor and ceiling reduces the scale of the atrium, while differentiating the colours vertically creates a stunning technicolour heart to the workplace. Communal spaces such as meeting rooms, breakout spaces, lounges and outdoor gardens are planned around the atrium. The floor plate layout naturally separates these spaces from the work zone, allowing them to be active social areas without disrupting the work environment.

Based on a brief written by Dutch activity-based working specialists Veldhoen and Company, the workspace is designed for activity-based work. Four “neighbourhoods” are distributed along the linear floor plate, each beginning with an identifiable “home base” for staff that contains personal lockers. Meeting pods and collaboration spaces create a buffer between the circulation and the work area. The workspace has two zones, one for concentrated work with greater privacy near the window, and one for more collaborative work adjacent to the meeting pods. A neutral white palette on workstations and walls is balanced by coloured floors and ceilings, creating a vibrant and interesting workspace. Indoor plants help separate the work zones, complemented by plantings on the exterior of the building.

The middle levels of Medibank’s tenancy take advantage of the building’s plant locations to create a double-height space called The Plaza. The Plaza is the building’s connectivity space, designed to promote collaboration by providing a centrally located, unprogrammed space for staff to come together. To maximize variety, The Plaza is structured as four “clubhouses,” each of which reflects Medibank’s themes of “innovation, inspiration, collaboration and healthy.”

Hassell developed the concept for one clubhouse and invited design practices Chris Connell Design, Russell and George, and Kerry Phelan Design Office to design the other three. Some clubs are more geared to socialization, with fireplaces, table tennis and outdoor social areas, while others have nests of private work areas. A collaborative area called “The Cloud” appears to float above the space on a mezzanine level. The variety of spaces for employees is impressive and these choices have been enhanced by the different practices that have succeeded in making cohesive spaces, without competing against each other.

Curiously the building’s most visible aspect, the facade expression, is perhaps its least successful. Initial renderings showed the aspirational idea of a continuous four-kilometre running track dripping in greenery around the outside of the building, literally incorporating the idea of physical health into the building. This improbable idea, portrayed with stunning atmospheric renderings, created a unique image and idea for the building that no doubt contributed to Hassell’s being selected by Medibank to design its headquarters. The commercial rationalization of the idea has resulted in a building with continuous white horizontal spandrels that bulge out, rather less curvaceously than the design team would have preferred, to incorporate planters on the north facade. While it is still early days, it is clear that the building will not have the abundant vegetation of, say, Jean Nouvel’s One Central Park building in Sydney.

However, this is a small criticism of what is otherwise an outstanding project. Hassell has created a world-class workplace that lives up to its aspiration of being the “healthiest workplace in the world” for Medibank’s new Docklands headquarters. Its highly impressive central atrium redefines the height at which a vertical void can be used to connect a workspace while remaining humane and legible. The building deftly negotiates complex levels and connections on the ground plane, in the process providing an active public realm and a new public garden, and discreetly separating the Medibank lobby from the stadium crowds. The building’s curvaceous planted edges will no doubt improve with time, resulting in a new green aesthetic for the Docklands. 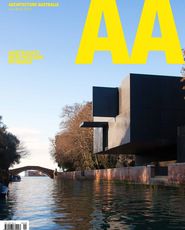 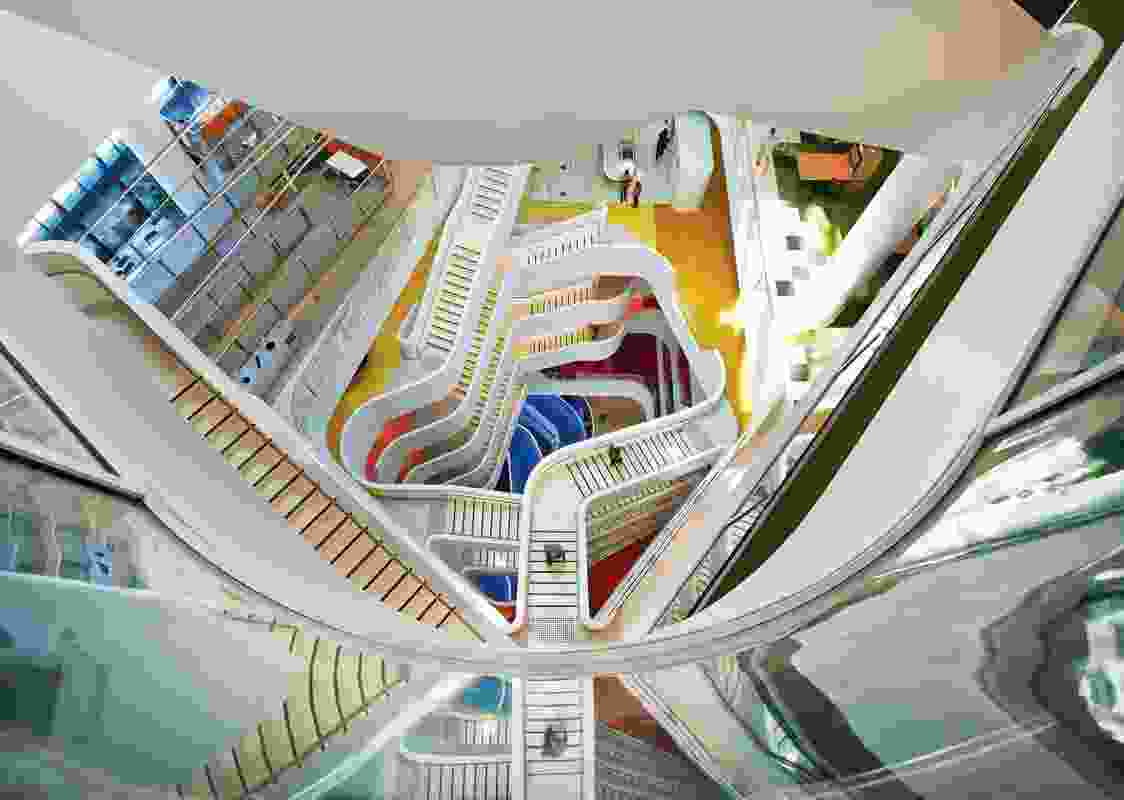 The central atrium redefines the height at which a vertical void can be used to connect a workspace while remaining humane and legible. 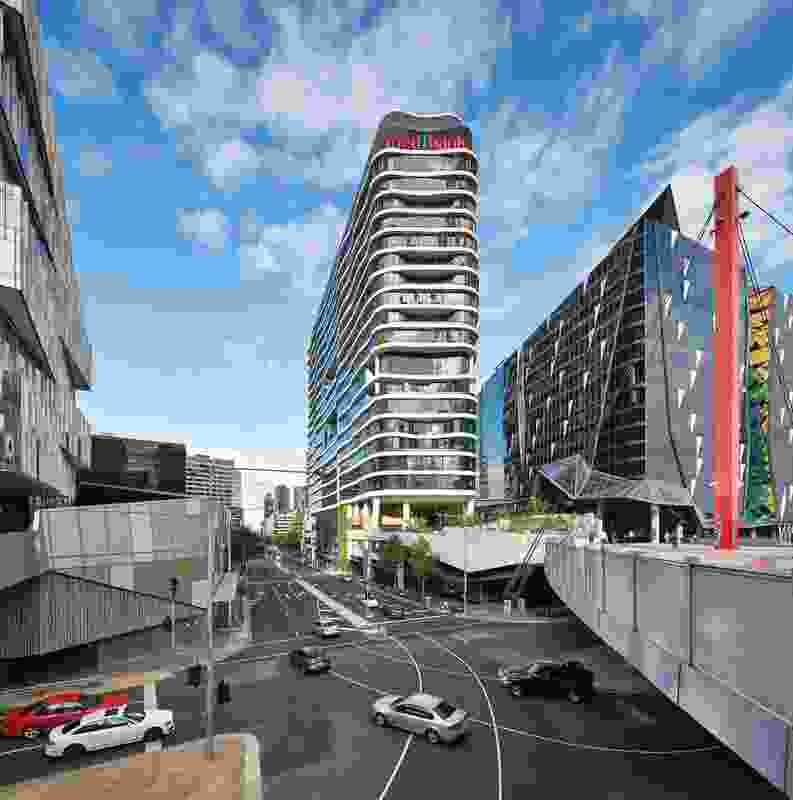 Medibank employees who arrive to work via Southern Cross Station are treated to views of lush landscaping and cafes on their way into the building. 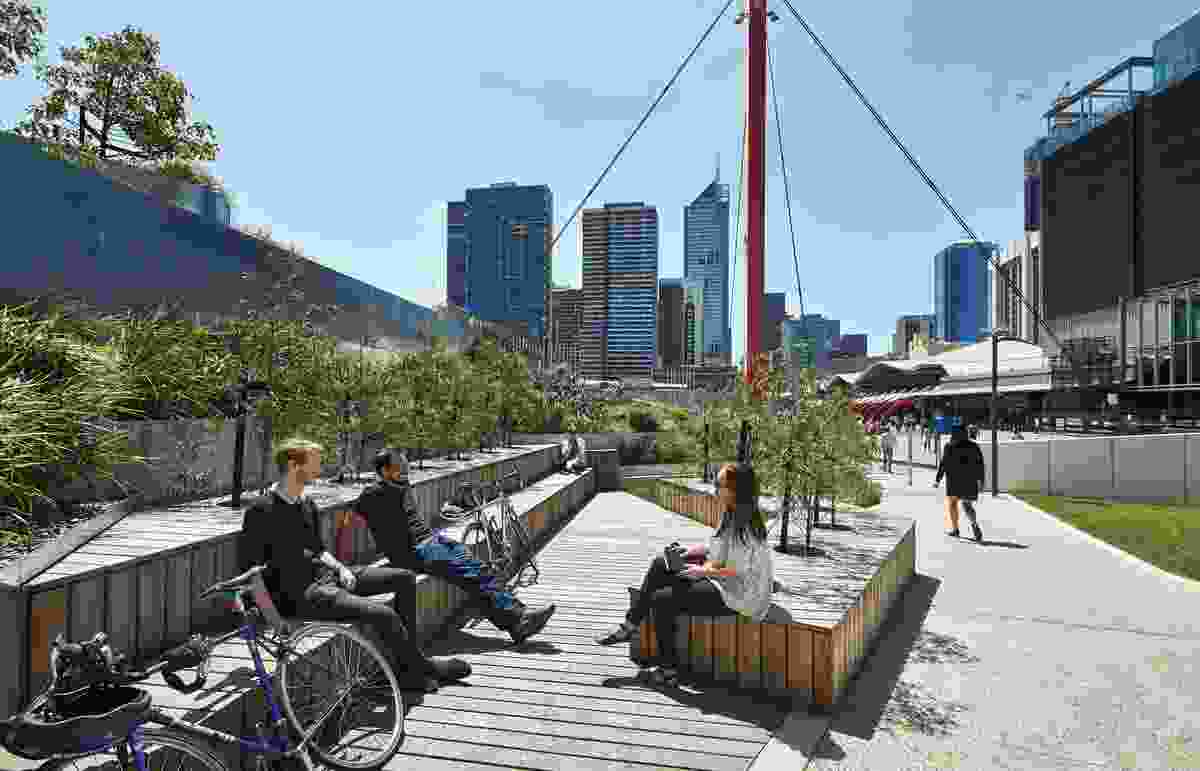 Plantings and timber seating at the eastern edge of the site create an informal meeting space with views to the CBD.

The glass facade facing Bourke Street offers glimpses through the atrium while green-panelled walls indicate public links through the building to the new concourse and stadium beyond. 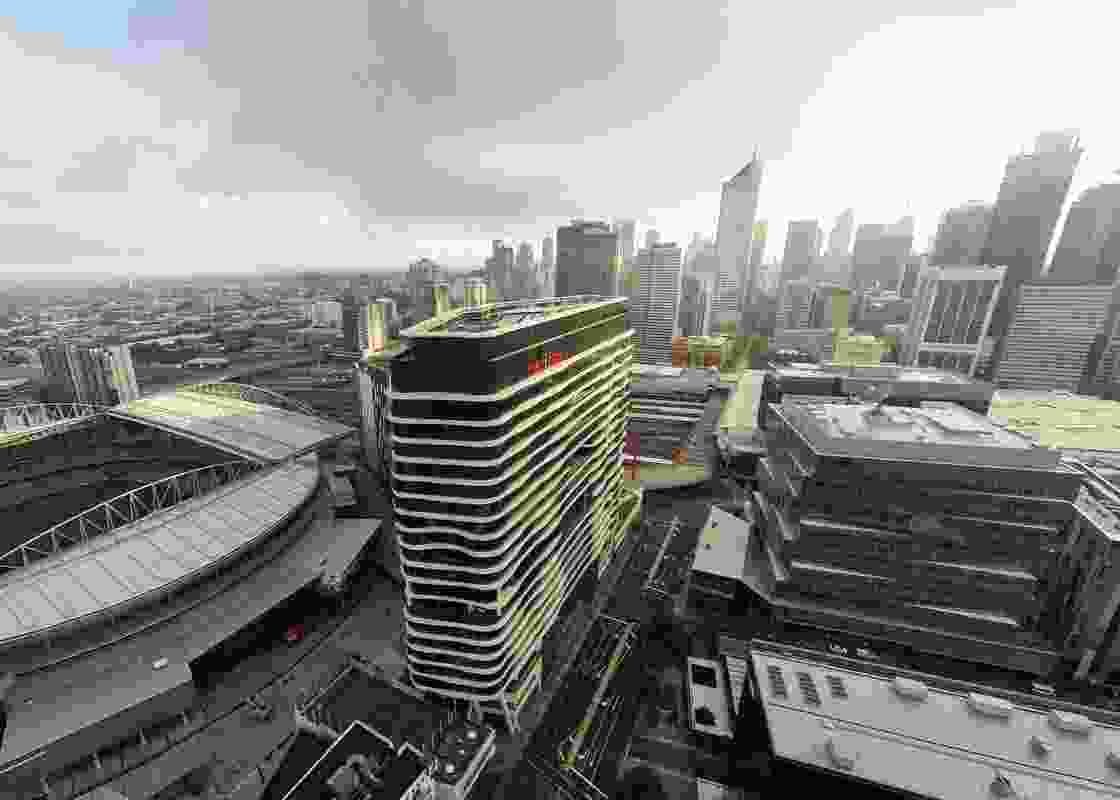 The building sits on a narrow, triangular site just south of Etihad Stadium and a 600-metre walk away from Southern Cross Station. 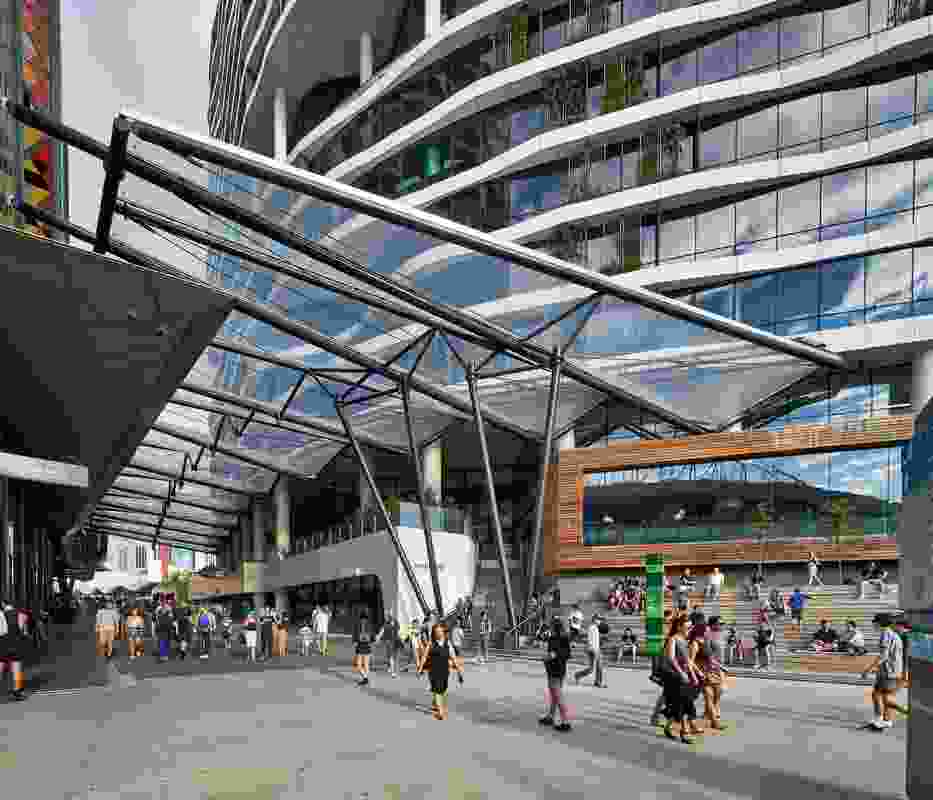 A canopy shades Medibank staff and pedestrians while timber seating offers a spot to rest. 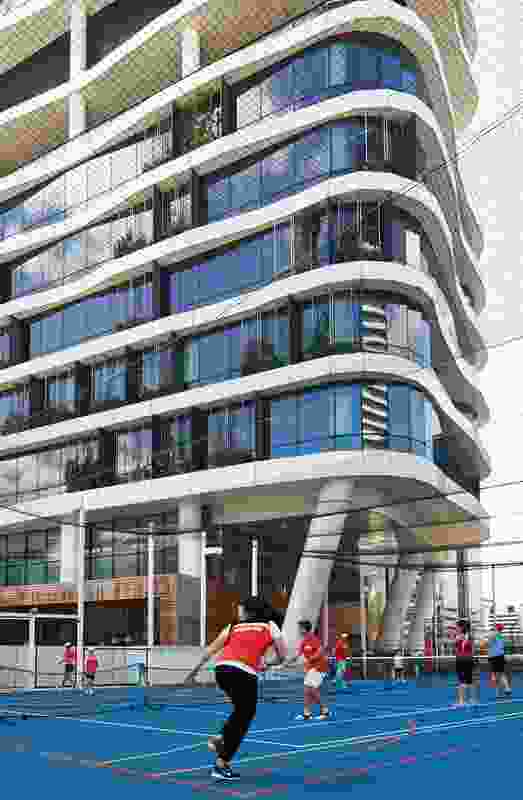 The multipurpose court conveys the company’s commitment to wellbeing. 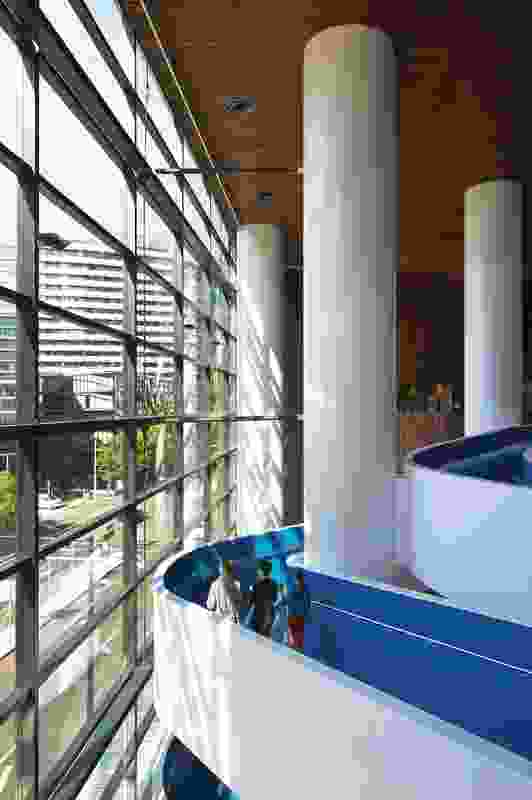 A spiralling ramp provides bicycle access to the end-of-trip facilities on level one and continues up to Medibank’s reception and lobby level. 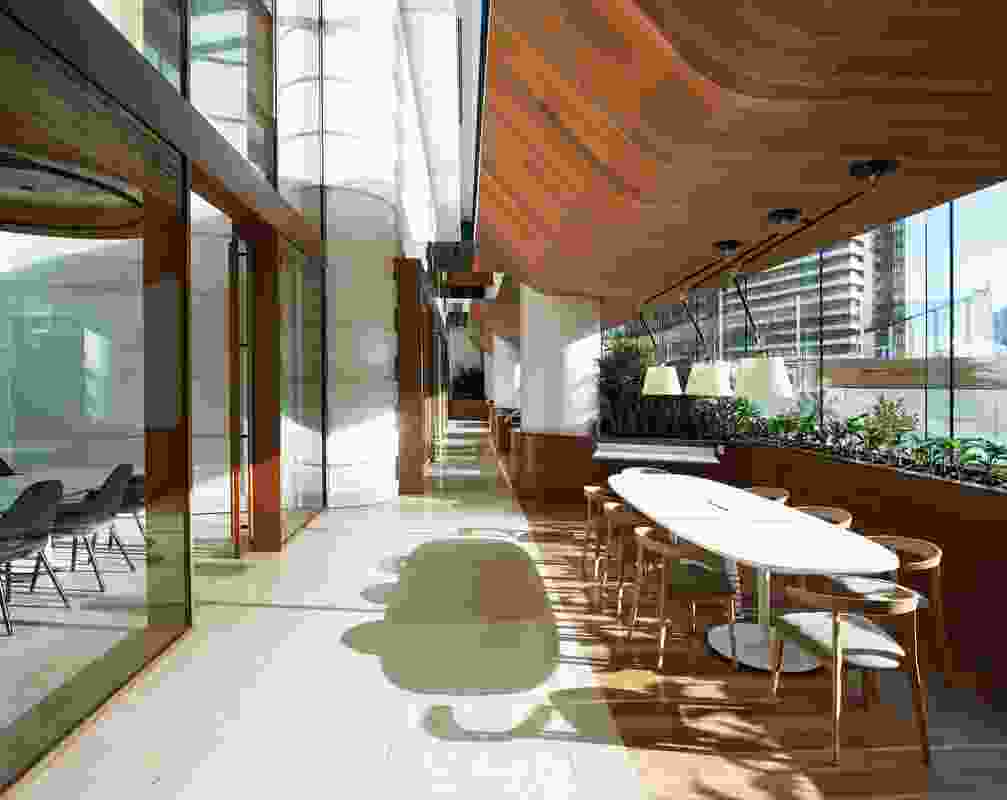 The architects made a variety of spaces for collaboration including a sun-lit area on the building’s north-west side. 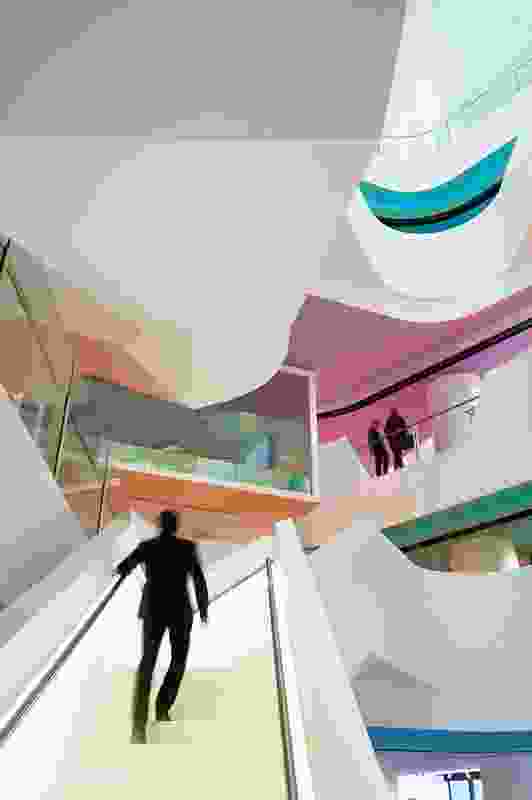 The bold use of pastel colours on each floor and ceiling reduces the scale of the atrium. 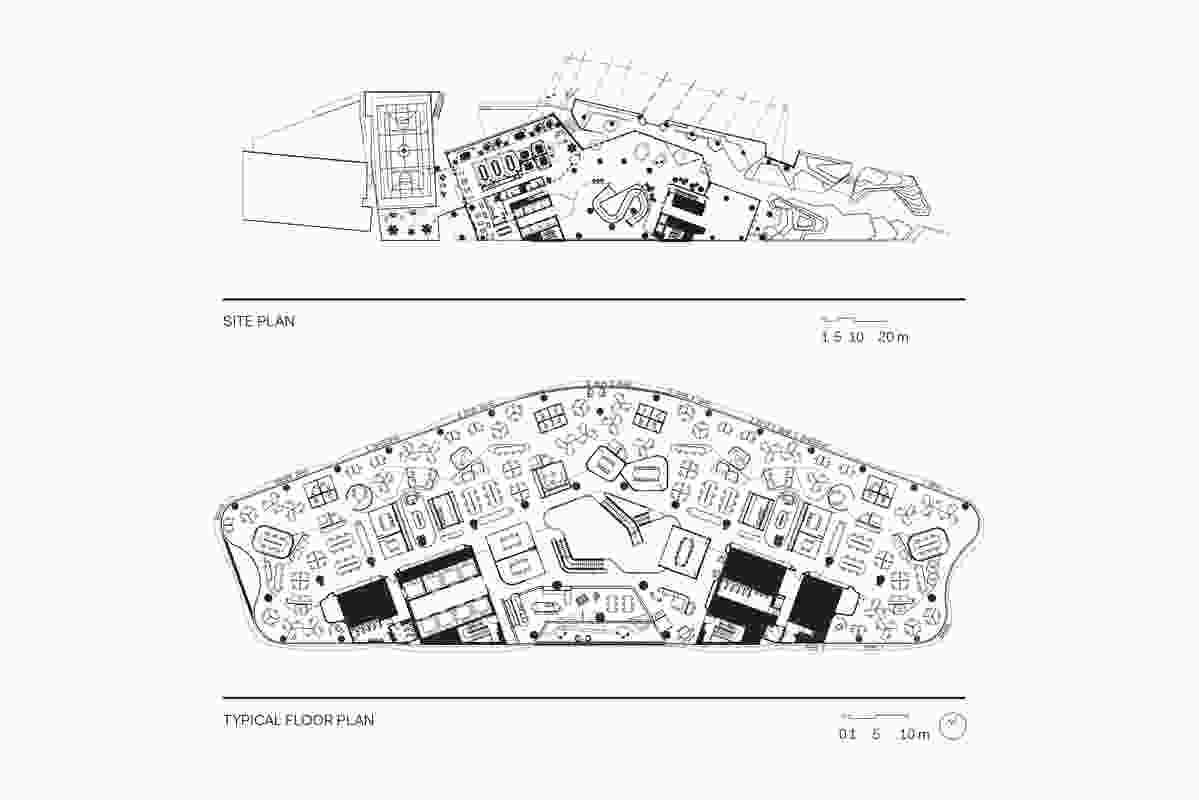