The new home to University of Melbourne’s Faculty of Architecture, Building and Planning has officially opened. Described as a living, pedagogical building, the new facility is setting new standards for education design in the Asia Pacific region.

John Wardle Architects designed the building in collaboration with Boston-based practice NADAAA, after the team won an international design competition conducted by the University of Melbourne in 2009. After fourteen months of construction, the building was completed in August 2014, four months ahead of schedule.

“Far from creating a singular building, our endeavour has been to provide a place for learning and research that in itself illustrates an abundance of possibilities for students to consider when responding to demands of complex problems,” said John Wardle.

The new building has four distinctly different facades, each of which responds to the unique conditions it faces. In addition to this, the design of the building had to represent all of the disciplines taught by the Melbourne School of Design, including architecture, landscape architecture, property and construction, urban design and urban planning.

The building occupies the footprint of the old Faculty of Architecture, Building & Planning, together with the neighbouring Old Commerce Building. The Joseph Reed-designed heritage facade (originally transplanted from the Bank of New South Wales in Collins Street) of the latter has been retained and incorporated into the new building design, as has been the Faculty of Architecture building’s much-loved Japanese Room, which was relocated to the fourth floor where it is complemented by a Japanese terrace garden looking out across Union Lawn.

At the centre of the design is a light-filled atrium, which is specifically designed to encourage collaborative activities. Surrounded by flexible open studios, the space is primed for the free flowing exchange of knowledge between students, teachers and researchers. “Education occurs not just during classes, but also in the informality of spaces and times in-between,” said Nader Tehrani, principal and founder of NADAAA. “The design of interstitial spaces forms a great part of the argument of this building, transforming spaces of circulation to create places of study, collaboration, and intellectual encounter.”

At each level, a steel mesh balustrade allows for optimum transparency and views into the atrium. Hovering above the floor of the atrium is the faceted, timber-clad Hansen Yuncken studios.

The entire building is designed as an education tool, with its exposed structures and materials giving insight into fabrication and construction techniques. The environmental performance of the building is also part of its teaching tools. It acts as a large scale laboratory, monitoring energy consumption through sensors as well as enabling the testing of emerging technologies. It has been given a 6-star Green Star rating by GBCA for its design and is also the first education building to be awarded 10 Green Star innovation credits.

“This building practices what we teach,” said Professor Tom Kvan, Dean of the Faculty of Architecture, Building and Planning. “It’s a building dedicated to pushing design frontiers and approaching challenges with innovative solutions.”

The Melbourne School of Design is open to the public in an Open House style event on Friday 12 December, 2014. 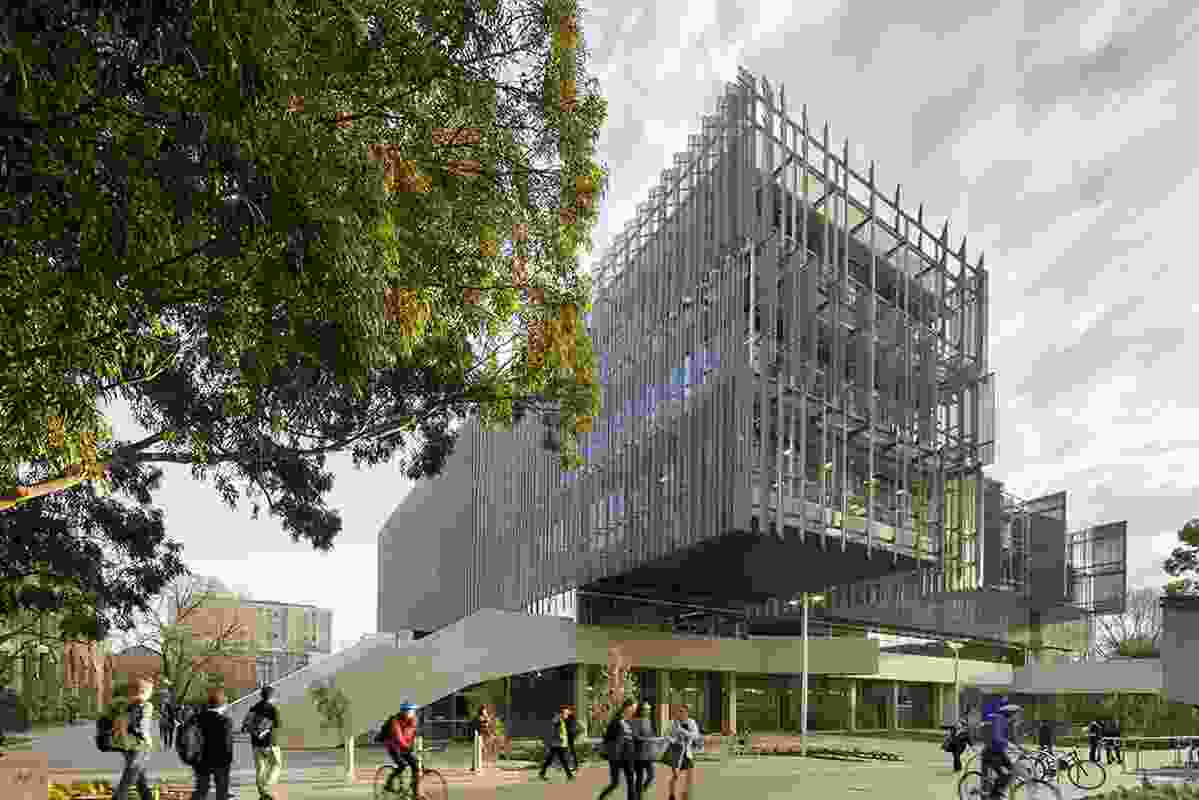 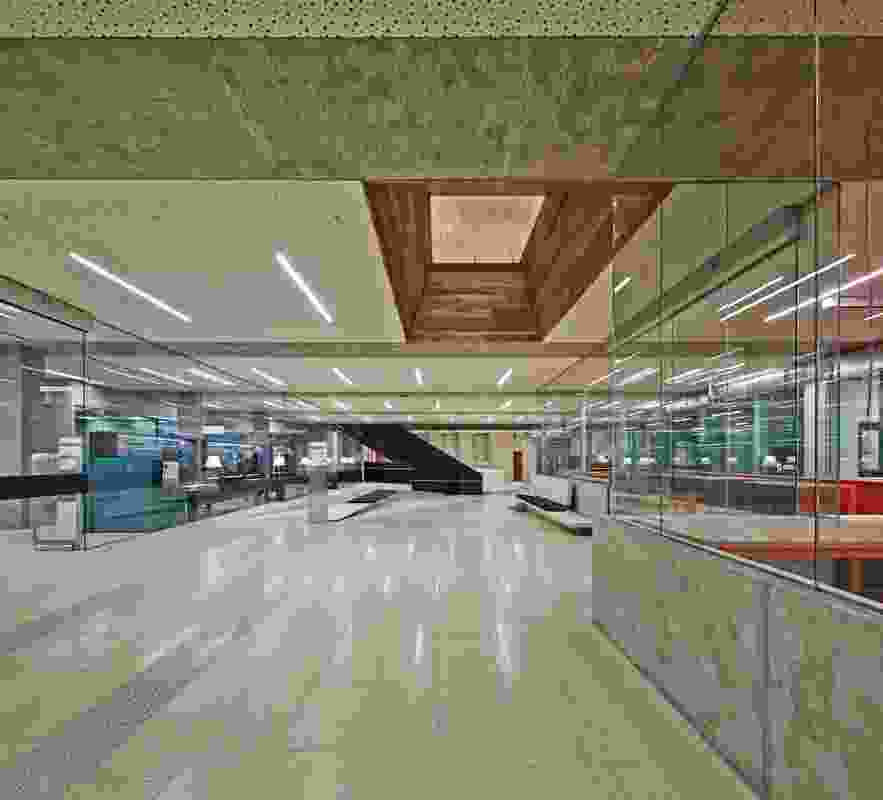 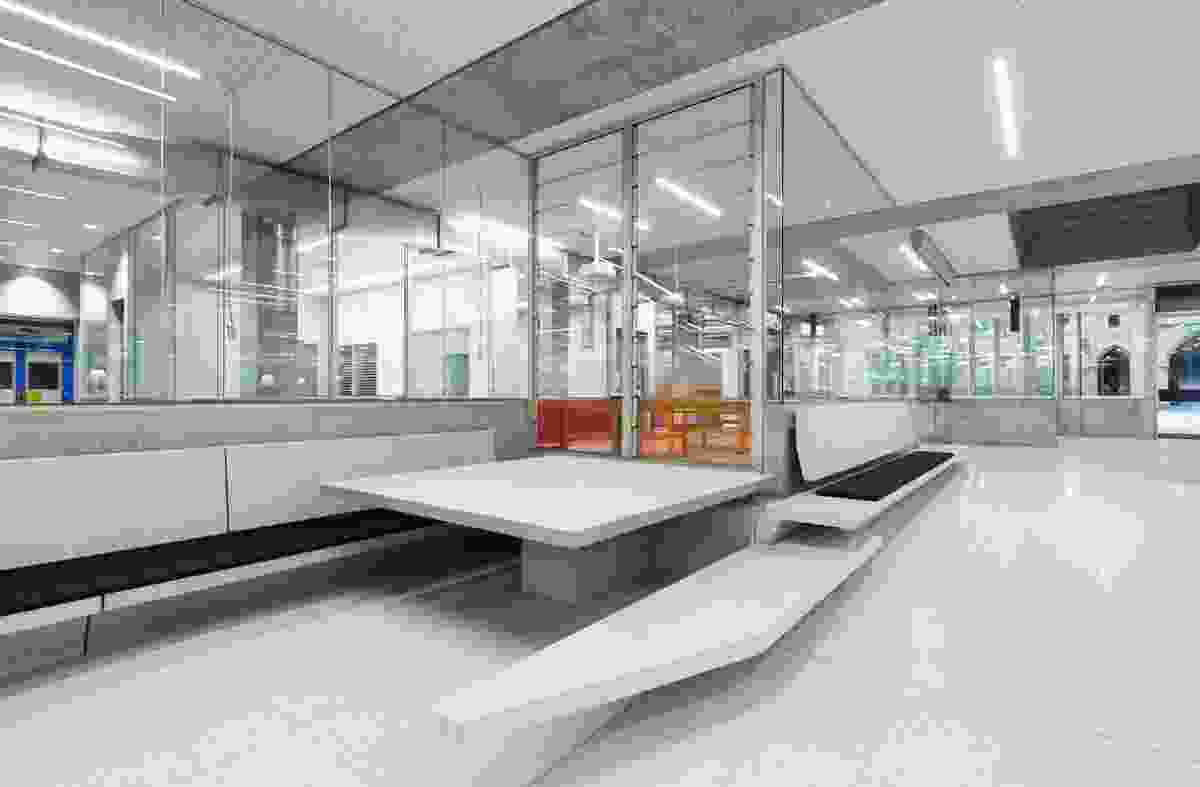 A view into the FAB Lab on the ground floor. 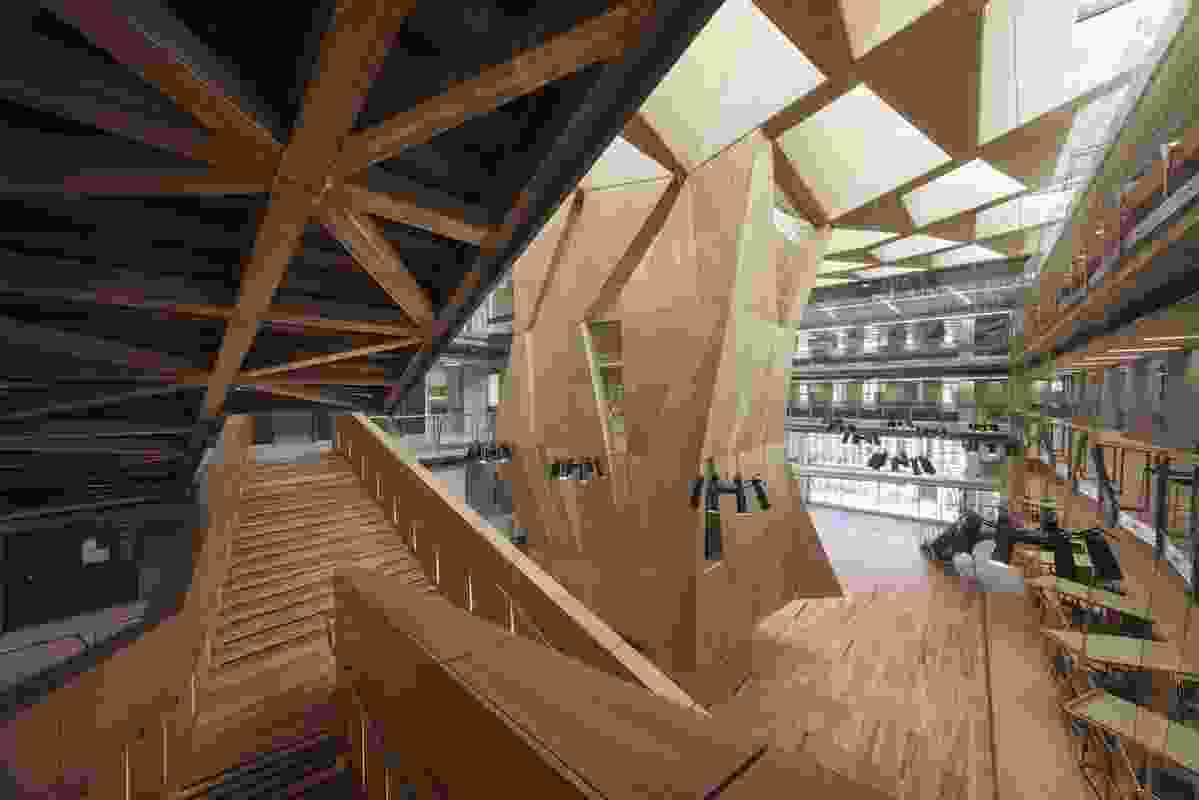 The structure is deliberately exposed so the building can be used as a teaching tool. 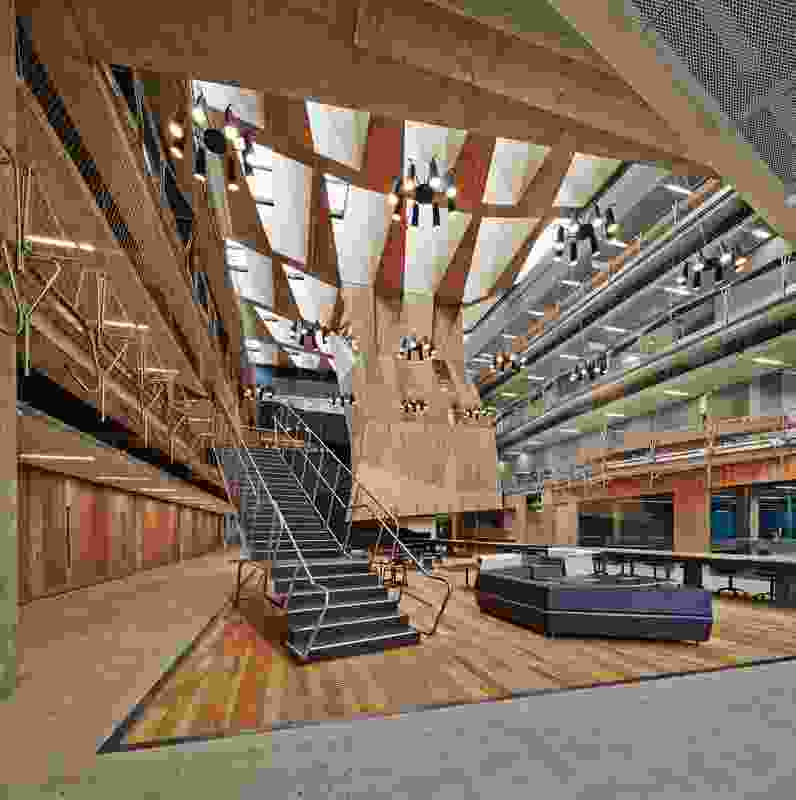 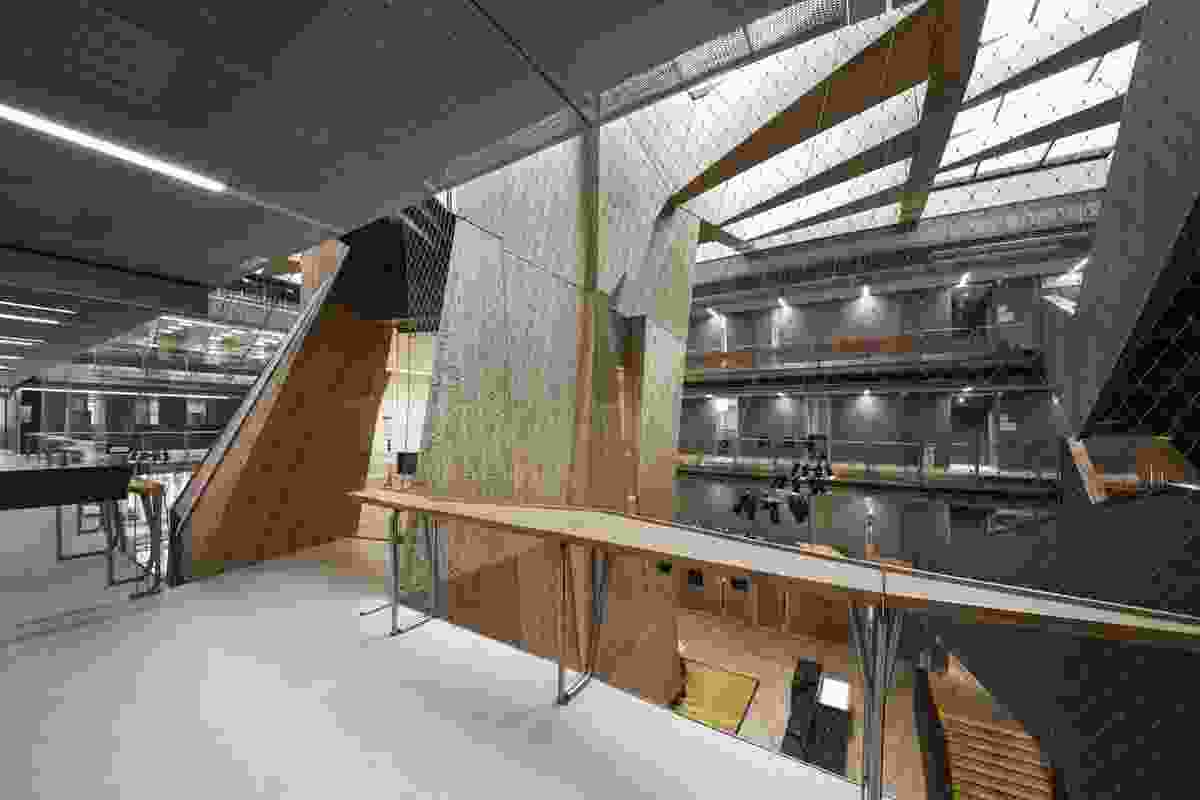 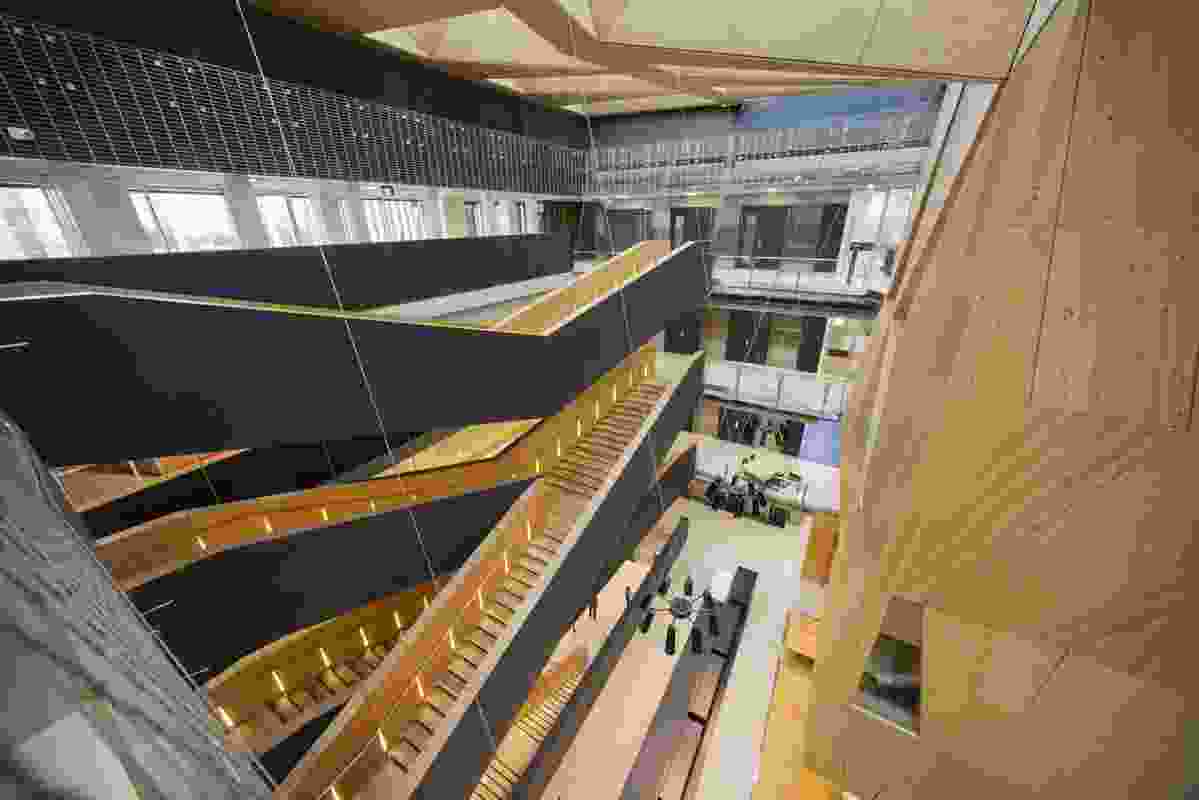 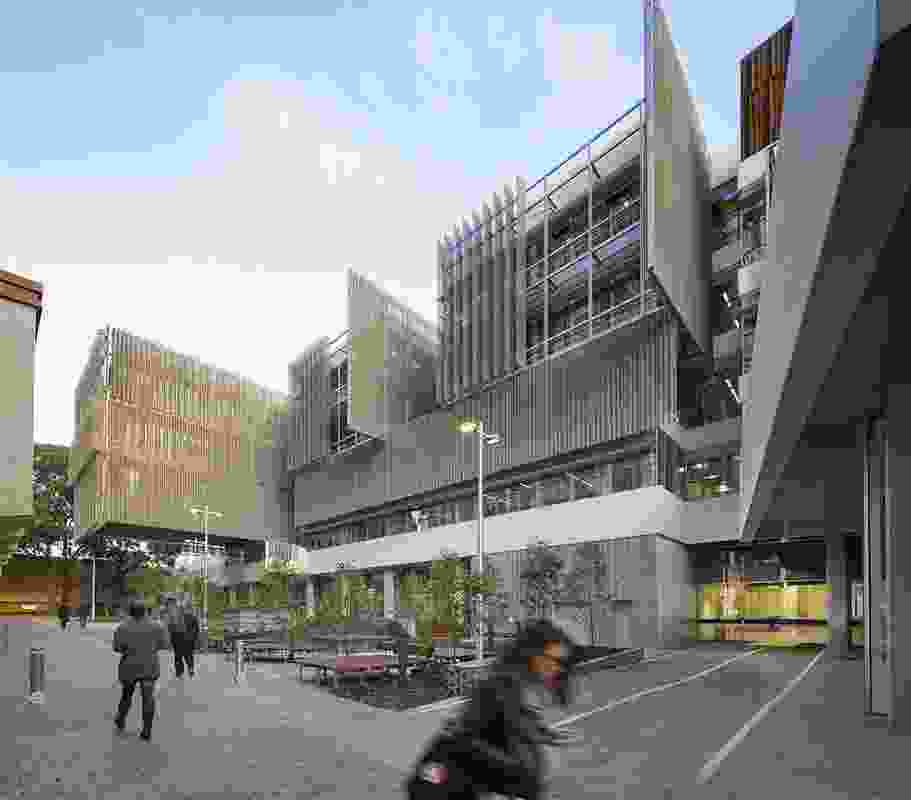 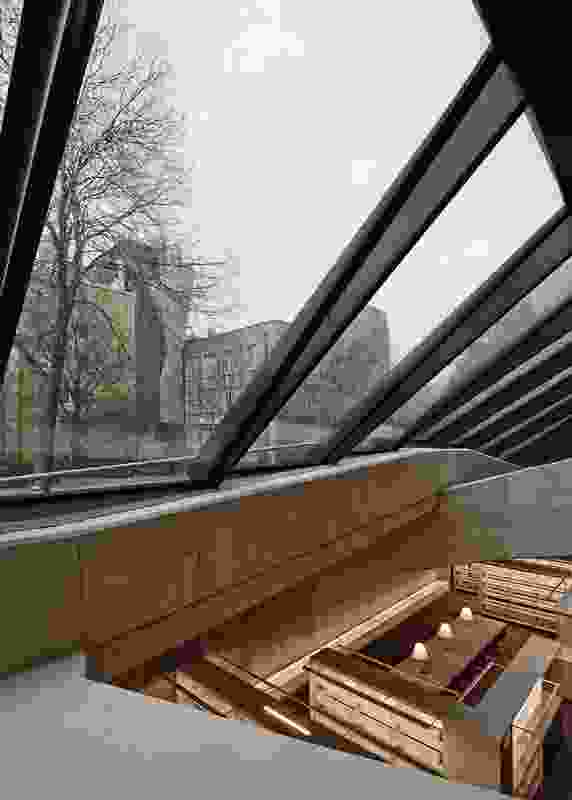 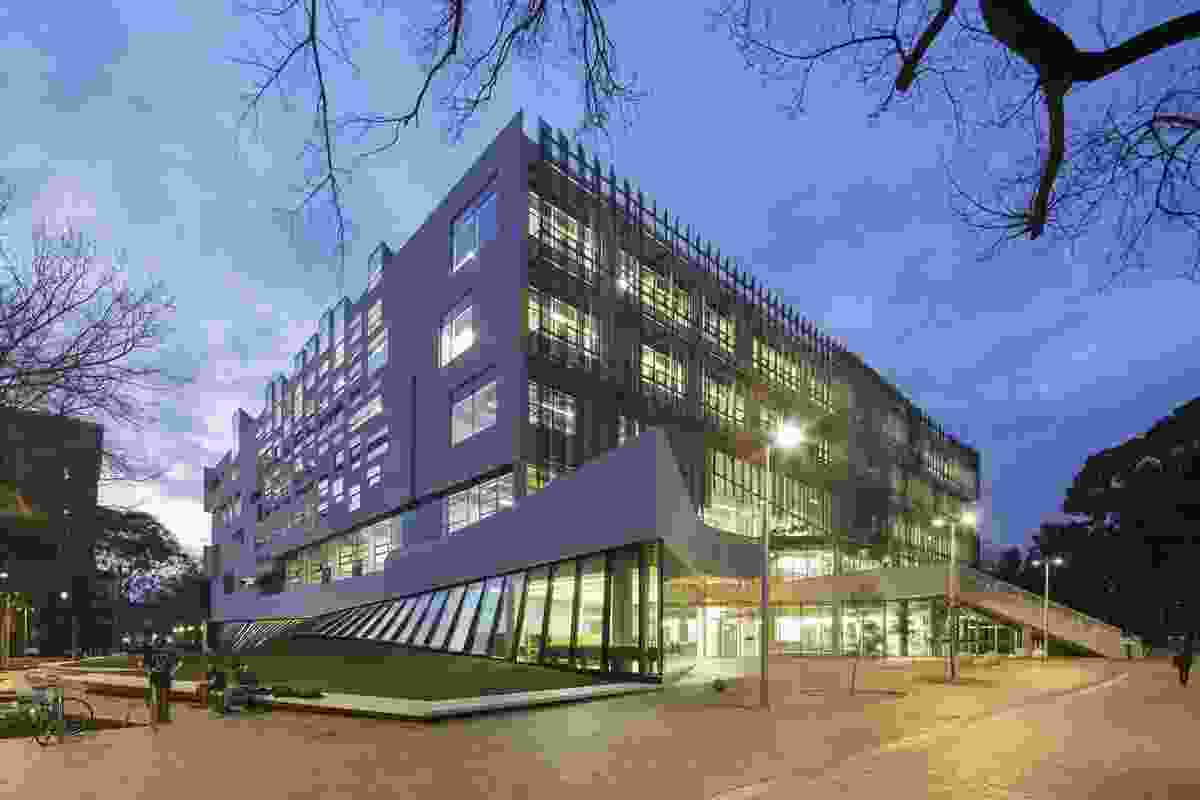 The south-east entrance to the building.