Open House Melbourne, which has evolved over the years into a month-long, open-access celebration of Melbourne’s architecture, will return for the 11th time in July 2018. At the heart of the festival is a weekend program that will see more than 200 buildings open to the public. The festival also comprises talks, exhibitions, workshops, tours and interviews that investigate the city’s built past and its rapidly transforming architectural identity.

More than 70 buildings will be making their Open House debut in 2018, many of which have been completed in the time since the 2017 festival – or, as is the case of Fender Katsalidis’ Australia 108 – are still under construction, giving visitors the opportunity to have a look around the projects that will one day define the city’s skyline.

To help you navigate your way through the substantial program, the ArchitectureAU team has compiled a selection of some of the most exciting new additions to the program.

A new addition to Melbourne’s substantial (and soon to be massively expanded) Southbank arts precinct is this new art museum situated within the Victorian College of the Arts.

The purpose-built gallery, which opened in February, is named for property developer and art collector Michael Buxton who, in 2014, donated his private art collection valued at more than $10 million to the University of Melbourne. He also donated an additional $16 million to fund the construction of a new museum and an endowment for the facility’s operating costs.

The Fender Katsalidis-designed space encompasses the former Victoria Police Depot’s stores and workshop buildings on the corner of Dodds Street and Southbank Boulevard. Behind the historic brick perimeter wall, the 2,200-square-metre, two-storey museum includes five galleries and a teaching space.

This distinctive $125 million cultural and entertainment facility in Narre Warren, designed by FJMT, references the history of the land and the stories of the area’s traditional landowners, the Boon Wurrung and Wurundjeri.

Specifically, the sweeping form reflects an abstracted version of the building’s namesake, Bunjil, an eagle figure that appears in Boon Wurrung creation myth, which is expressed in the arrangement of the building’s two wings and slender roof.

The building won the top architectural prize at the International Design Awards earlier in 2017.

Currently under construction, Fender Katsalidis’ follow-up to the Eureka Tower in Southbank will be the tallest residential building in the Southern Hemisphere once complete in 2020.

Where the Eureka tower’s design was inspired by the Gold Rush-era Eureka flag, the distinctive starburst that marks the Australia 108’s midpoint references the Commonwealth Star on the Australian flag.

Once complete, the 319-metre residential tower will contain over 1,100 apartments across 100 floors, and include a dizzying array of dining spaces, theatrettes, gymnasiums, pools, spas and a barbeque terrace.

The soon to be opened stage two expansion of the Melbourne Convention and Exhibition Centre will include 20,000 square metres of flexible, multi-purpose event spaces. Architects from NH Architecture and Woods Bagot will lead tours through the expansion and share their design inspirations for various spaces in the complex, such as the gala ballroom, open-air courtyard, the grand staircase and high-tech exhibition bays. Tour participants can also enjoy light refreshments from the new café and bar at the end of the tour.

Completed in 2017, this tower in the Docklands, designed by Melbourne practice McBride Charles Ryan, is inspired by, and named for, the Banksia wildflower.

The botanical references are present in the circles and organic shapes that appear throughout the building, culminating in an art installation at the building’s entrance titled Beaded Samphire, named for the native plant which grows several hundred metres away on the banks of the Moonee Ponds Creek.

The tower sits at the centre of NewQuay Central Park, a 4,600-square metre green space that features a variety of native Australian species of flora.

The New Experimental Technology Lab (NExT Lab) at the University of Melbourne centres around a futuristic glass monolith, installed in a gallery space at the Melbourne School of Design. Designed to help make emerging technologies like virtual reality and 3-D printing more accessible to a broader audience, the cube both entertains and educates.

The glass walls conceal 32 3-D printers, which glide out of the structure at the touch of a finger. A network of VR sensors and screens mounted on the walls also surrounds the structure, as do chairs, bean bags and desks where visitors can relax with a coffee and learn more about the technologies the cube harbours.

The upper half of the cube contains an entrancing LED light installation, which, rather than being simply decorative, is used to teach coding and programming to students.

Idle Architecture Studio purchased a derelict warehouse in Cremorne, which has had number of lives as a hotel, mechanic shop, glaziers and illegal marijuana growing facility, in 2013.

Over Open House weekend, the architects will show visitors how they went about transforming the rickety space into their own architecture studio, which opened for business this year.

Monash University will open a staggering 37 sites across its various campuses as part of its participation in the Open House weekend.

Of particular note are a number of recently completed buildings that form part of the university’s major redevelopment and expansion of its facilities, including the renewal of the Caulfield Library and the sculptural Learning and Teaching Building, both designed by John Wardle Architects, and the Alexander Theatre redevelopment by Peter Elliott Architecture and Urban Design. Visitors can also find the 2017 MPavilion by Rem Koolhaas and David Gianotten of OMA, after it was recently relocated to Monash’s Clayton campus from the Queen Victoria Gardens.

Architect Peter Maddison, widely known for presenting Grand Designs Australia, has designed a “small house with big ideas” to challenge common conceptions about what is necessary or important when building and designing homes.

The concept house will be installed behind Her Majesty’s Theatre for the duration of Open House Melbourne.

Artist and editor Eugenia Lim, founding editor-in-chief of Assemble Papers, has produced a three-channel video installation titled The Australian Ugliness which will be exhibited at the Melbourne School of Design and be accompanied by a month-long program of related events.

The video work pays homage to the work of architect Robin Boyd and his book of the same name.

Elsewhere, Open House Melbourne has collaborated with the Australian Centre for the Moving Image (ACMI) to present “Modern Melbourne,” a series of filmed interviews and related archival material that explores the lives and work of the city’s modernist architects. 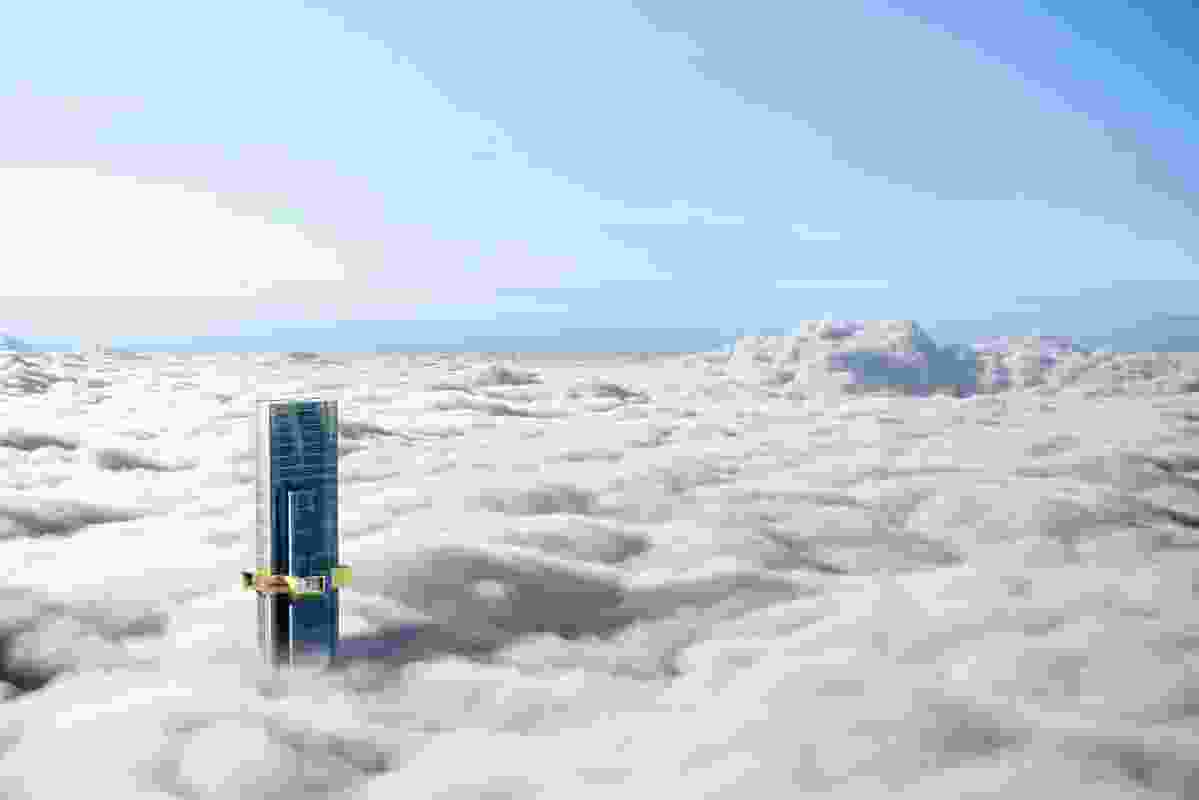 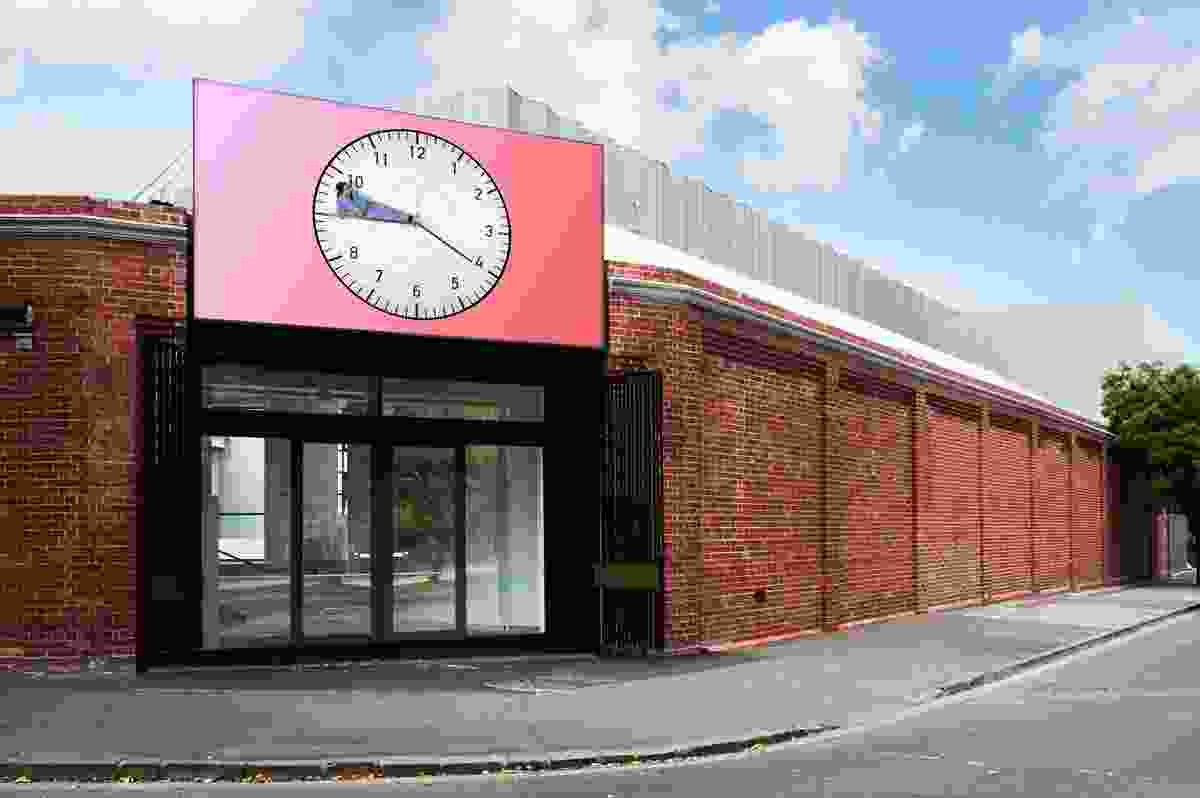 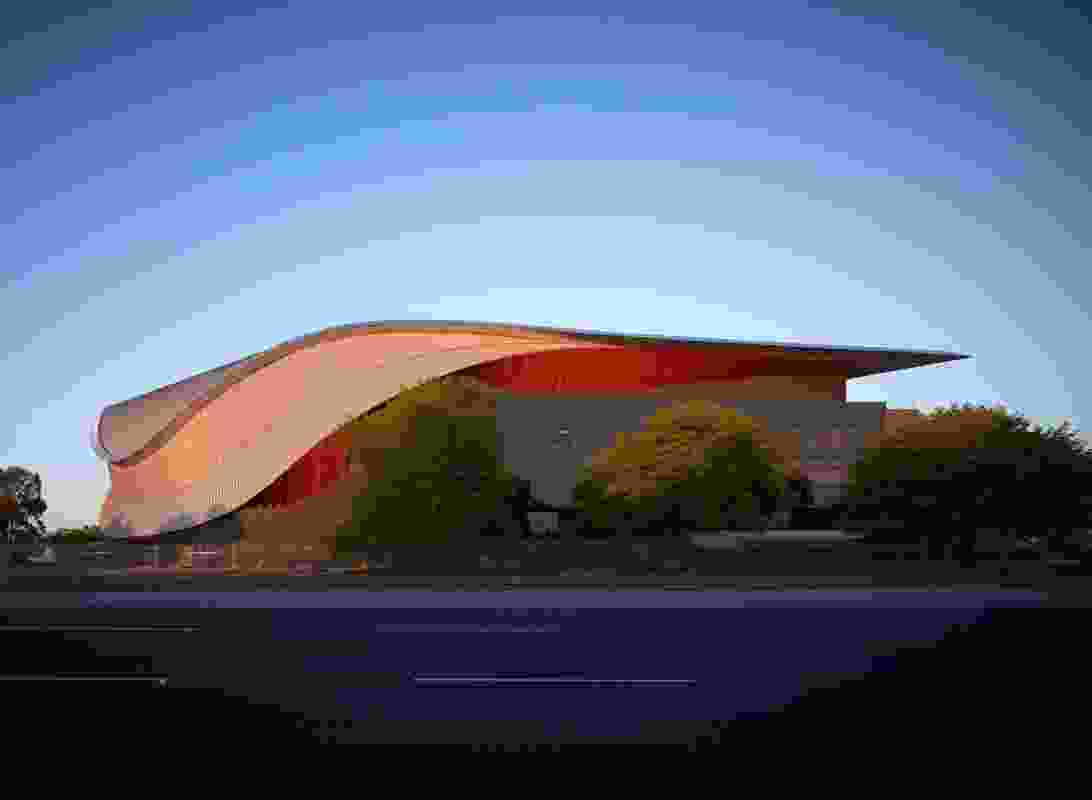 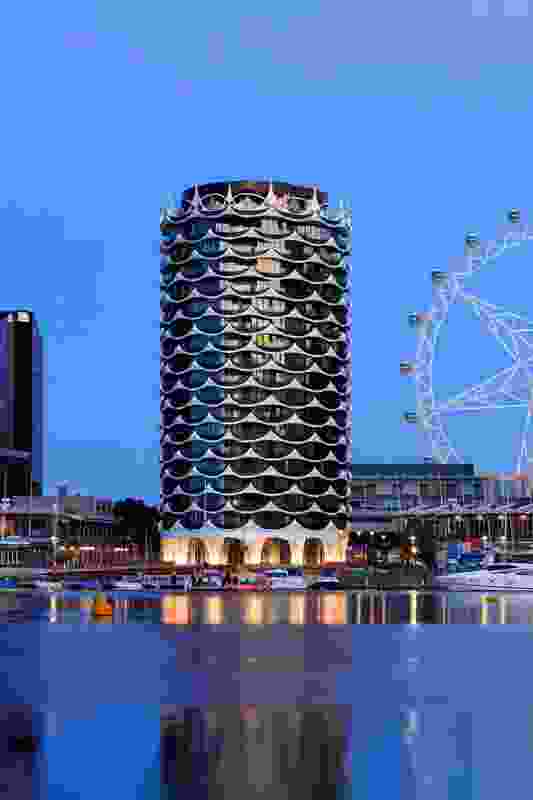 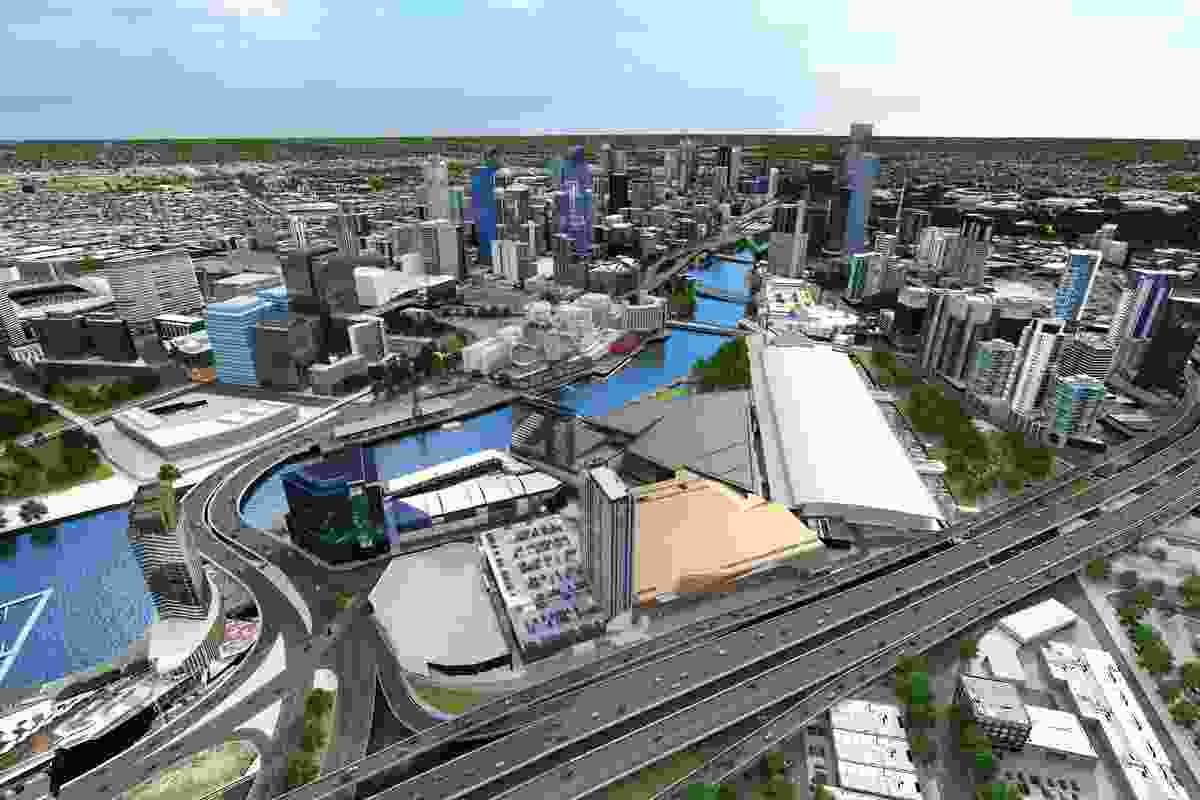 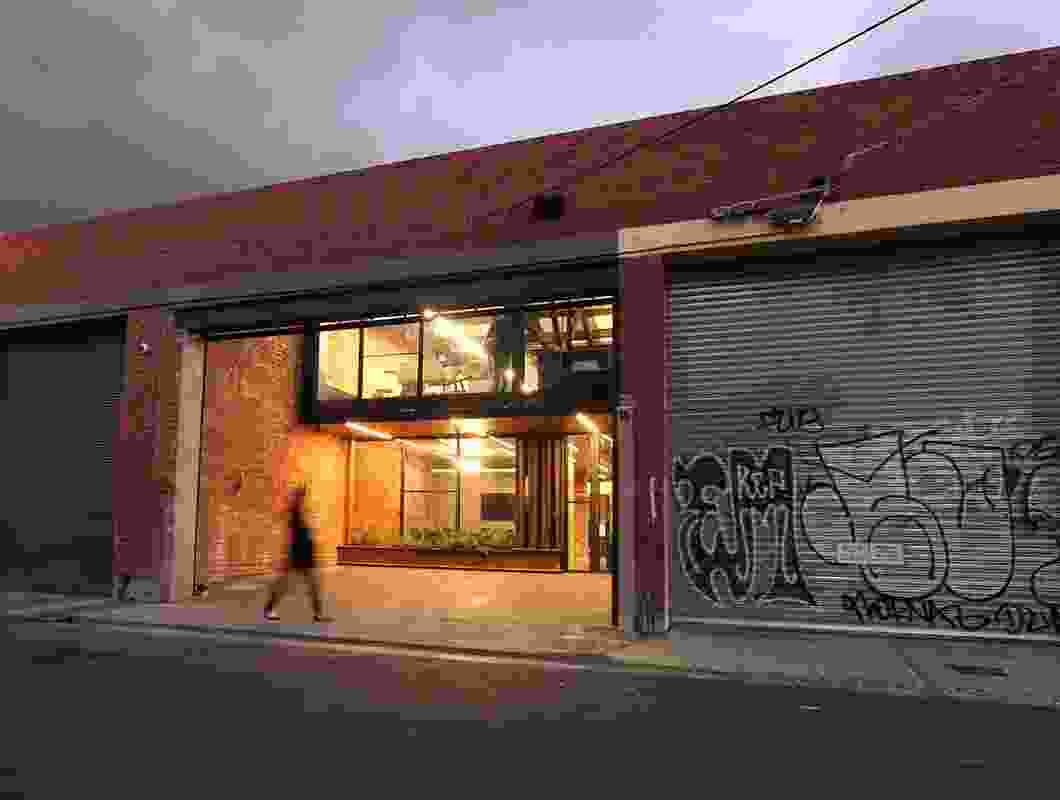 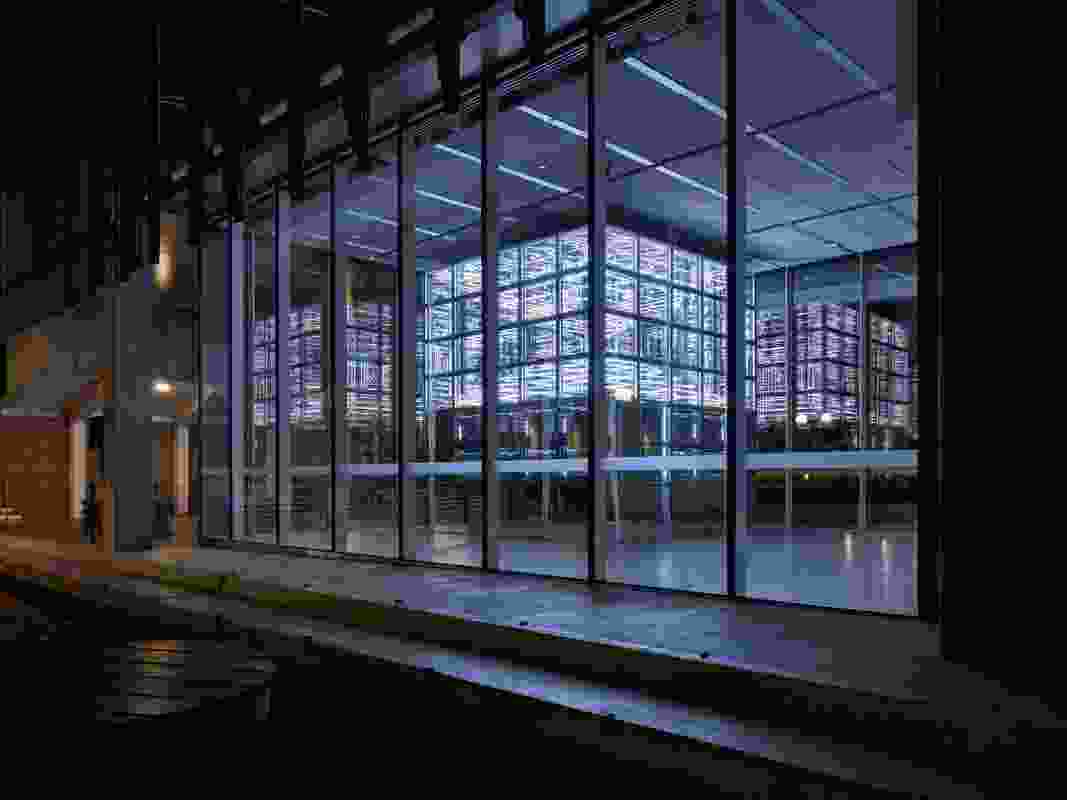 NExT Lab by Ample Architecture.