Games of geometry and scale, and the use of recycled materials are part of the fun in a retreat by Kennedy Nolan Architects.

The house plays with scale, appearing to have two levels.

A beach house is a place where the daily acts of life can be relished. Instead of rushing to get the food on the table after a busy day at work, you can spend all day cooking and preparing for an evening meal. Instead of flicking the switch on the heater when you get home, you might collect kindling for the wood fire, which involves a stroll to the beach and back. The Merricks Beach House by Kennedy Nolan Architects is somewhere one can indulge in such mindfulness about the act of living.

Merricks Beach is just over an hour’s drive from Melbourne – an easy weekend getaway. Although not in the city, the small towns dotted along the coastline appear suburban in layout. This house is located on a block of land with a north–south orientation. As you approach, the house appears from behind a planted mound. The scale of the project is hard to gauge at first. As architect and owner Rachel Nolan comments, “I’ve enjoyed making a little big house, or a big little house.” With painted brickwork below and boxed-out timber above, it appears as if it might be a double-storey house. On entry, however, you realize that it really is a modestly sized beach house, “a very clipped little creature,” as Rachel says.

A courtyard takes pride of place within the home. It allows the northern light to fill the living spaces at the southern end of the site. The streets in Merricks are unsealed, which creates lots of dust on the northern edge of the property, so the courtyard plan works well for this reason, too. Keeping in mind that visitors don’t formally arrive at a beach house, the main entry leads you into this courtyard from the carport. A concertina concrete block wall within the courtyard leads the way to the “front” door, even though it feels like you might be entering from the back door. Approaching the house through the courtyard provides an opportunity to see into the house before you enter, which makes the living spaces almost appear as a stage set for family life.

Priority has been given to the size of the living spaces, so sleeping spaces are compact: there are two small bedrooms and an open-plan bunk room. The spatial configurations within the house have been carefully considered, and functions aren’t necessarily divided by walls. Rachel has delineated spaces by introducing level changes, varying ceiling heights and using the contrast between light and dark spaces to good effect. For example, the bunk room is open to the corridor, and is deliberately a very dark space. This contrasts with the corridor, which is well lit by a large window to the north. In another example, a sunken pit defines the edge of the living space and the step-down creates an extra seating area or even sleeping space. These gestures rethink the way thresholds are defined, and create a series of flexible and usable in-between spaces.

The kitchen has been designed to reflect the “heightened domesticity” that takes hold at a holiday house, especially during winter. The act of cooking becomes a key part of the day, so a good-sized kitchen was important to Rachel. The kitchen bench is 850 millimetres deep, making the space feel generously proportioned. An enclosed barbecue deck flanks the kitchen and opens out to the backyard to the south. This enclosed deck can be opened up during the warmer months, adding extra space to the interior. Rachel was interested in the idea of pulling your house “in tight in winter and expanding it out in summer.” This is also evident in the courtyard space – in the summer months, with the sliding doors completely open, this becomes a primary living space.

The basic material palette for this house comprises recycled brick and locally milled timber, which will turn grey as it weathers. The brick has been painted white on all walls, apart from a circle with a 1800-millimetre diameter. This circle of recycled red bricks embeds a form of decoration into the walls: further adornment is not needed. The circle is mirrored externally, as if it punctures through the wall, also giving interest to the rear elevation. Exposed concrete flooring is used within the kitchen and circulation spaces and provides good thermal mass during the winter months.

This house is set up so that you can go down on a Friday night and immediately enjoy it. Although this is Rachel’s own family holiday home, it is also going to be used as a rental property. This fact played a key role in many of the design decisions and material choices. In addition, Rachel intended to bring other families and friends to the house, which also aided in the decision-making process. For example, the bunk room can function as a secondary living space for the children while the adults are out the back. The bathroom planning also takes sharing into consideration, with all functions separated so that someone can shower while others brush their teeth. In this arrangement, there isn’t the need for more than one bathroom.

As Rachel says, “architecture is one thing, but having everyone in the house is what animates the spaces and makes them warm and welcoming.” Having people over to enjoy the spaces was of utmost importance to the design of this beach house, and it is sure to be a place of many fun family memories. 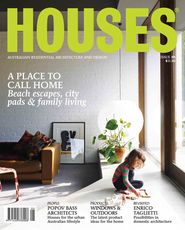 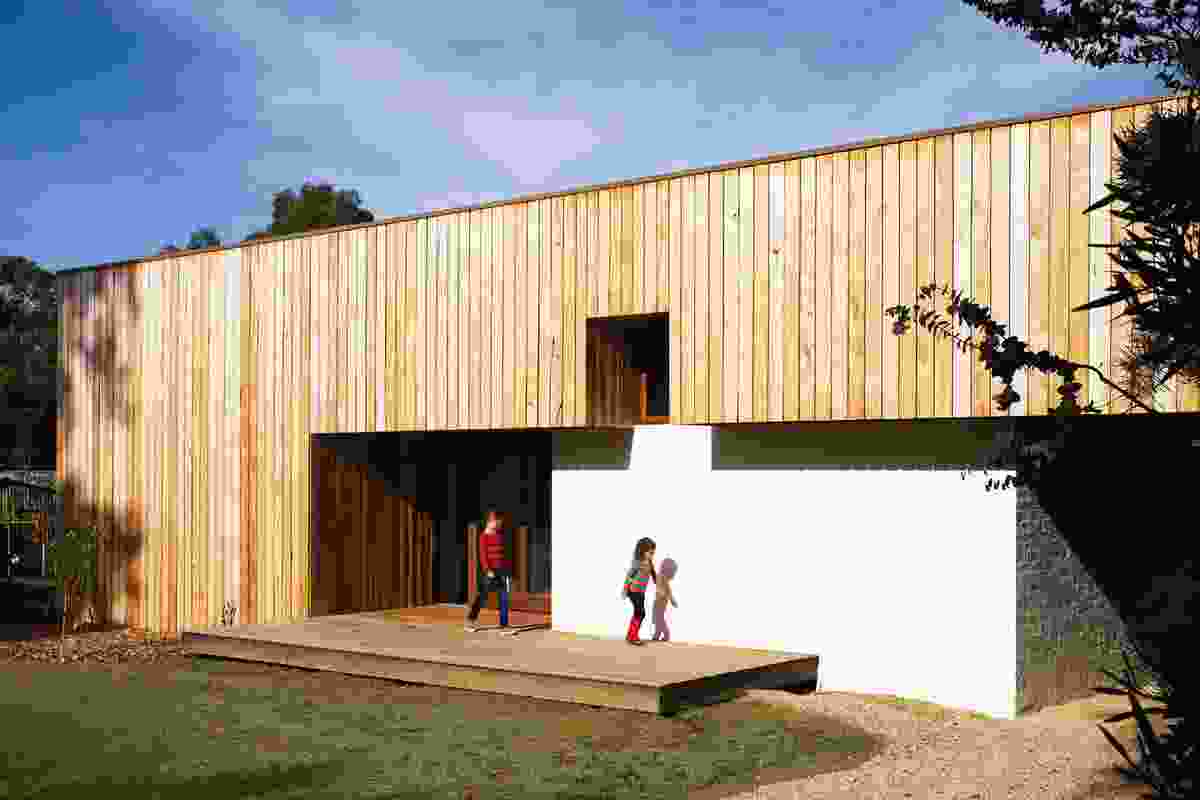 The house plays with scale, appearing to have two levels. 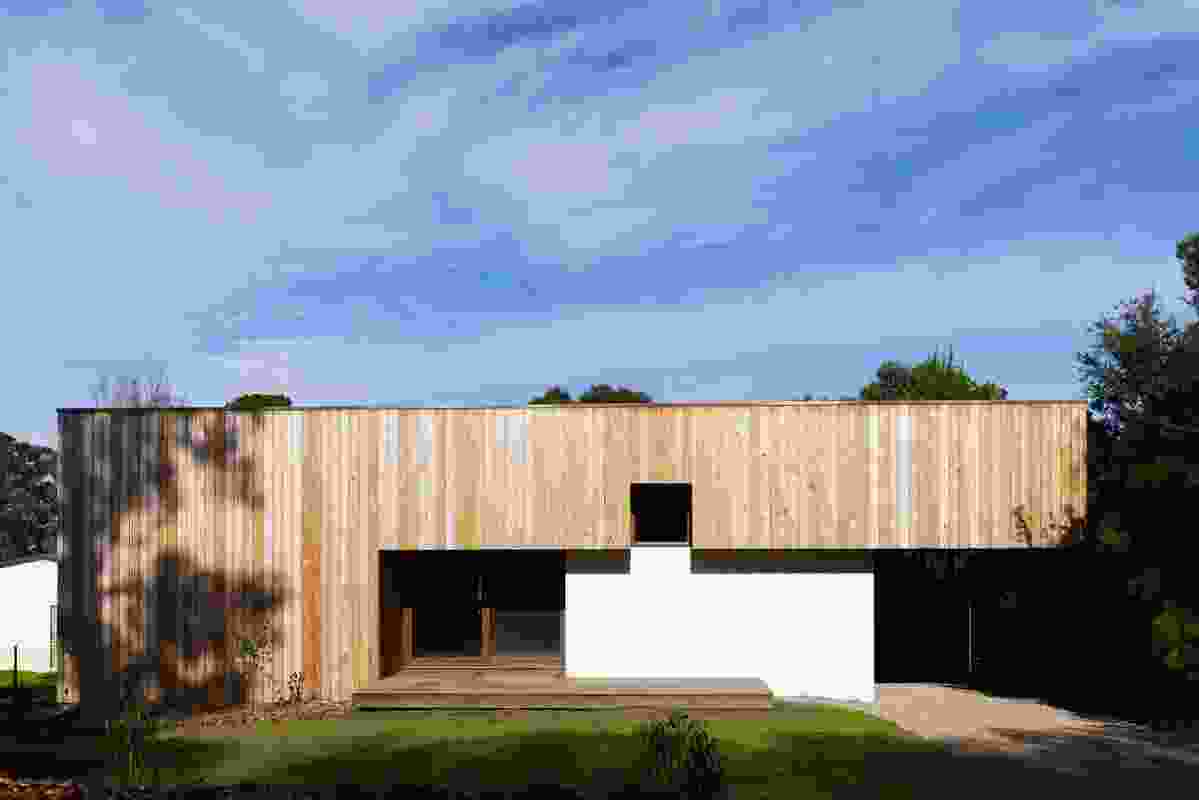 A timber arm wraps over the white brick box. 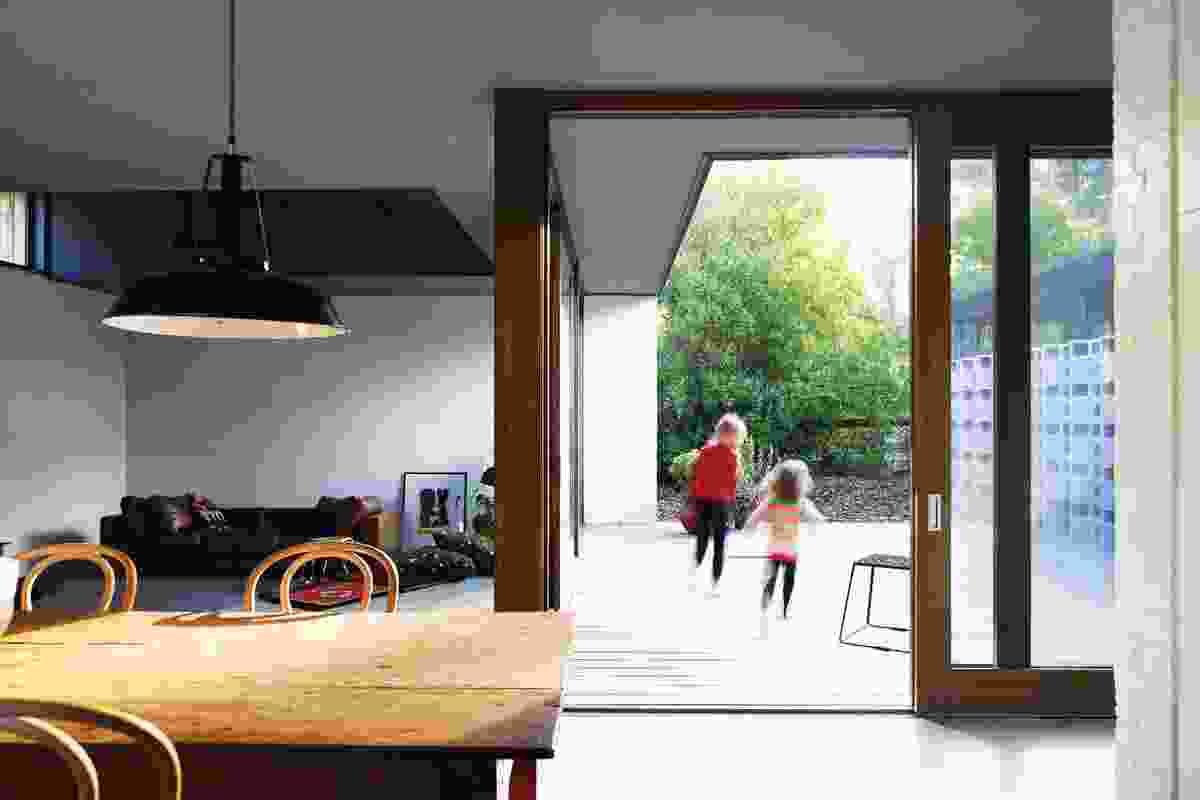 The courtyard becomes a primary living area in summer. 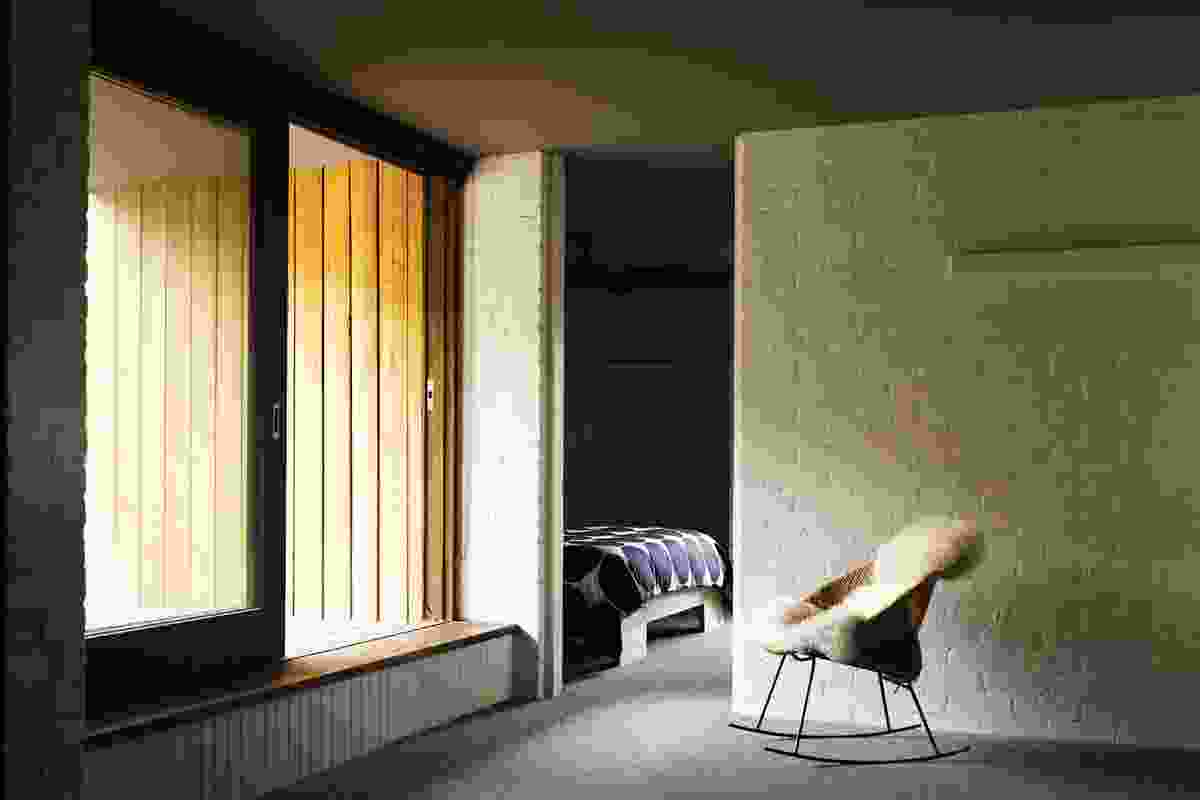 Contrasting light and dark defines the edges of different functions. 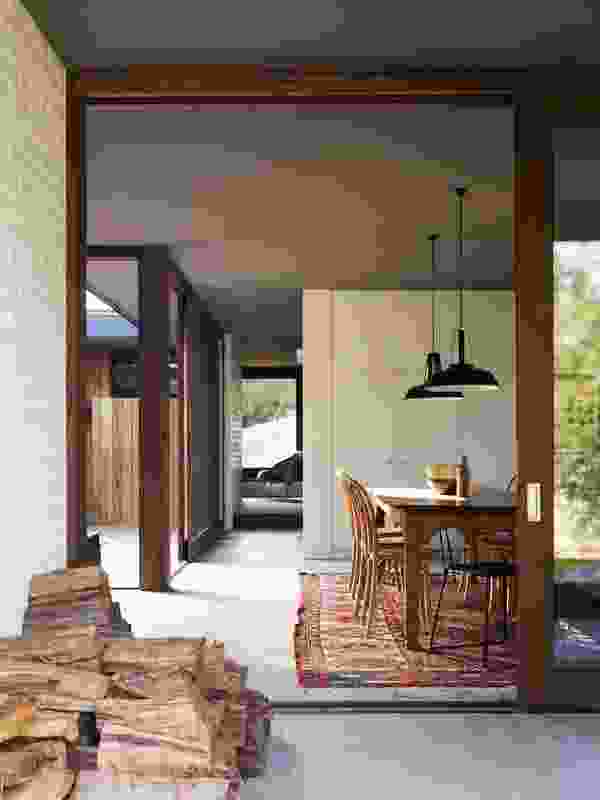 An unfolding view through a series of spaces. Threshold to the sunken living space. 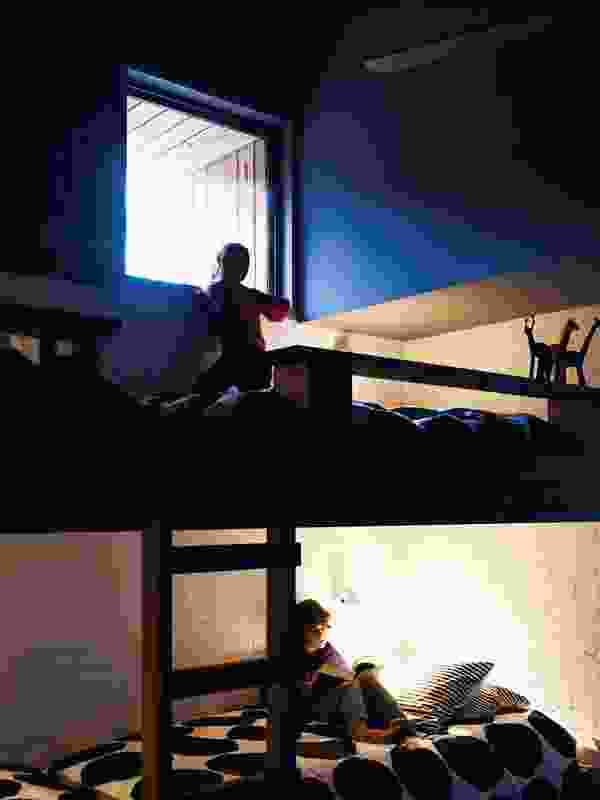 The bunkroom doubles as a kids’ play space. 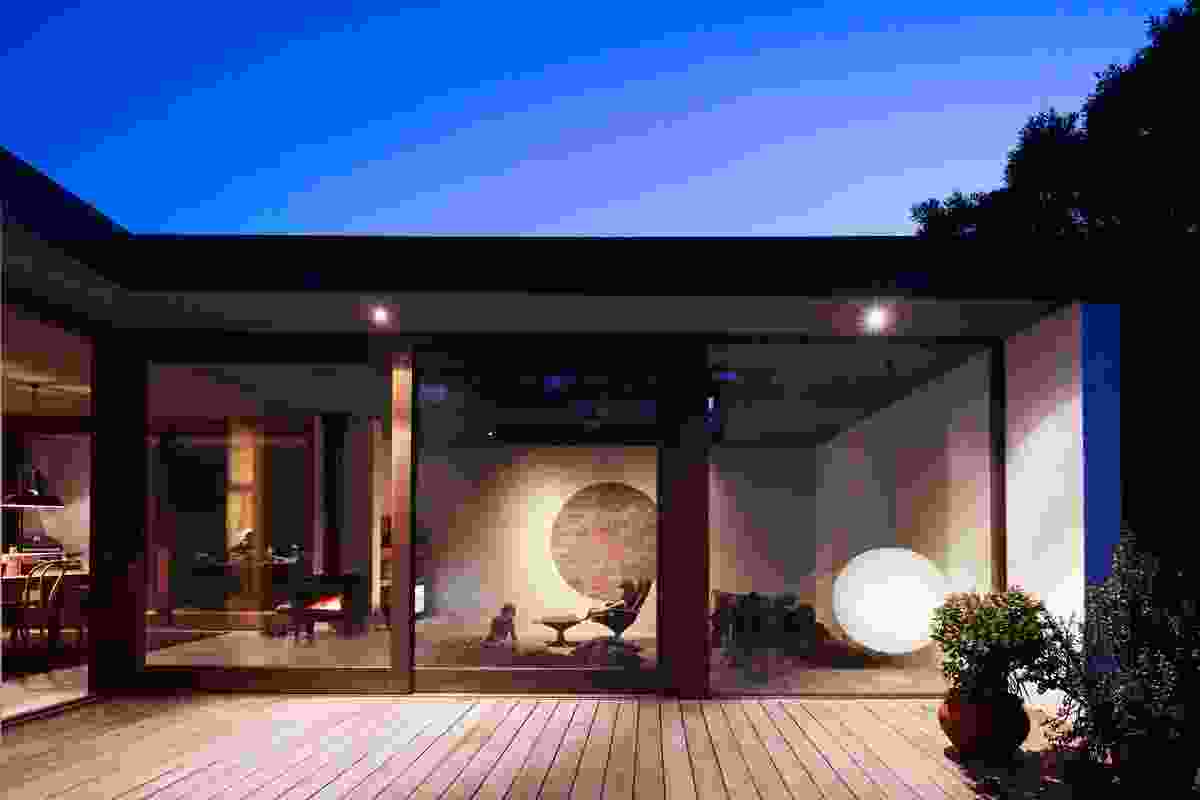 A play of positive/negative: the brick mural and the low-slung paper lantern. 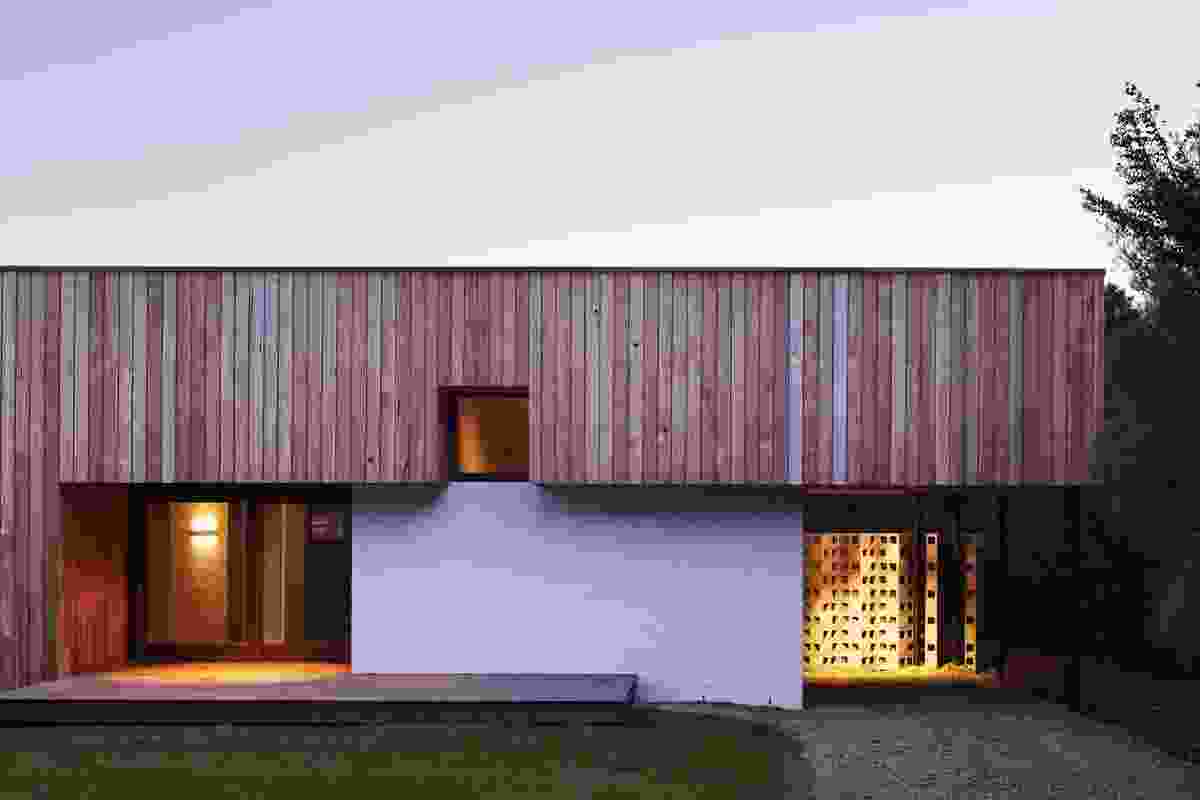 Details in the structure are revealed at night. 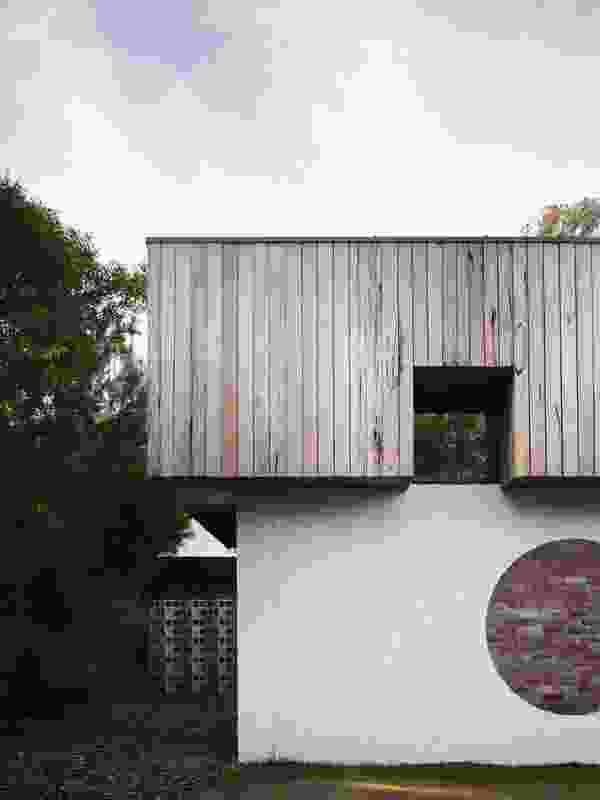 A graphic composition of shape and texture, mass and void. 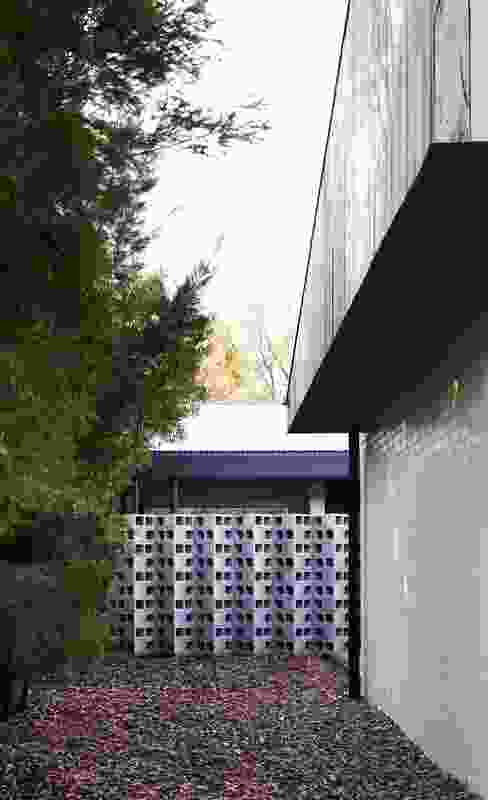 Detail of the stepped breezeblock screen. 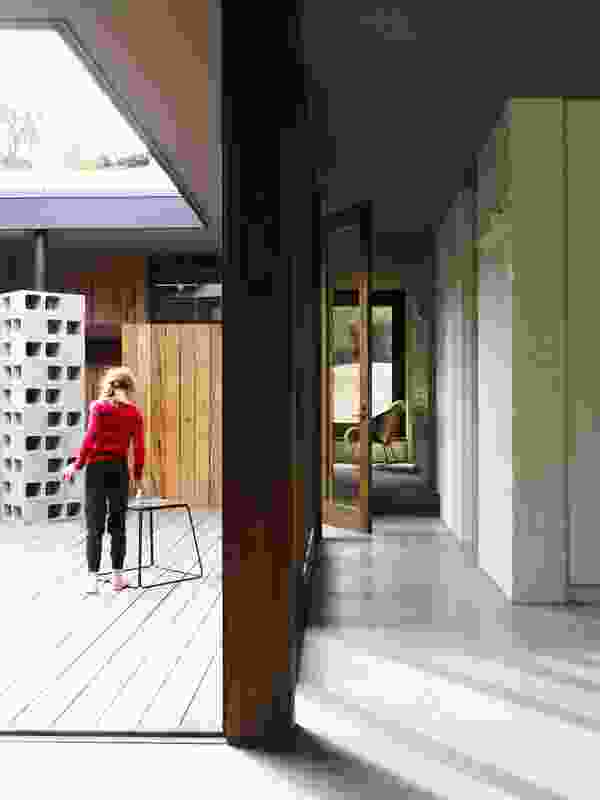 Detail of the courtyard / corridor junction.