A series of open timber-framed units underpins the interior design.

You mightn’t guess from its current graceful form, but this house was once on the cusp of demolition. “It was completely ramshackle and it leaked like a sieve,” says designer Kerry Phelan“But we saw this beautiful Hollywood front and thought how special it was,” counters architect Stephen Javens. “You just can’t get these sorts of crafts anymore.”

The original plan was to demolish the house and start again. But Kerry and Stephen excised layers of renovation – “It’s had a really chequered history,” Stephen explains – and saw plenty worth restoring. Fortunately, the client didn’t need too much persuading to cancel the wrecking ball. The next chapter of the story saw Kerry and Stephen, after negotiation with the client, live in the house while they designed it – and this is when the project’s true potential emerged. “It completely changed our approach,” Stephen says.

“The narrative starts as this stream of 1920s ideas,” Kerry explains, a concept clear from the minute you enter the house. “We redesigned this front door to give it some nobility and some strength. It is such a heavy facade – anything lighter would have felt a bit lost.” Kerry’s brother Mark was enlisted to create the striking De Stijl-esque windows and side lights that frame the door. Cresting the stairs is a delicate light fitting by New York designer Lindsey Adelman.

The entry hall connects the two floors. A central corridor bisects each level, running the length of the house. The team has used this axis to delineate the public from the private. On the second floor, the sitting, kitchen and dining spaces are arranged along the eastern side, with the private spaces – the main bedroom and its connected sitting room, dressing room and ensuite – occupying the western side. The ground floor is divided lengthways too, continuing the separation of private and public.

A key challenge of the project was to address the unmodulated open-plan living spaces of the original layout. “We thought about how to add rooms without destroying the integrity of the walls as they were,” Kerry explains. “One thing that we tried really hard to do was to not block any of the light coming through because it was so crystalline.” Kerry devised a deft solution to this space-planning problem – a series of lean, lightweight timber frames that separate the central kitchen from the living room on one side and from the dining room on the other. “It interrupts this space and you get this lovely sense, the notion, of a room,” Kerry says.

Finished in a honeyed timber, the framing is a versatile device that is reconfigured for use in various rooms. The frames reappear as a sleek wall unit in the dining room, a simple bar in the lounge and a central shelving element in the dressing room. “The language through the spaces is this open ladder frame that supports a function. It keeps everything very lightweight,” Kerry adds.

Perhaps the project’s greatest success is how each space, even without physical enclosure, is infused with a distinct personality. The house’s more intimate rooms – whether for solitude or socializing – are well-judged complements to the light-filled living, kitchen and dining zones. Alongside the stairs there is a neat little two-metre-by-two-metre room, almost a viewing deck, that soaks up the views across Port Phillip Bay from Williamstown all the way to St Kilda. “This is the client’s favourite room,” Stephen says. “It’s a really great folly.”

The playfulness of this little room continues at the rear of the top floor, with a neat pair of rooms in perfect opposition. There’s a cosy timber-accented bar that extends from the dining room. “This was meant to be quite a masculine space,” Stephen explains. “The client wanted this unit at bar height so you could lean on it and relax.” The bar’s alter ego is a refined champagne lounge just alongside – what might once have been called a conversation pit – wrapped in silk carpet, with timber-panelled walls and a nest of brash orange cushions. “We wanted something that was a bit more seventies,” Kerry says. “It’s a much more feminine space, this little jewel. The rest of the house is all so open and light. This is a discreet little cocktail lounge,” Stephen adds.

The bathrooms and dressing rooms are infused with character too. They are darker and moodier; a move away from the light timbers and white marble of the living spaces with their dark-stained timber and a dramatic rippled brown marble. “I like a moody spot in the house. We all live such public lives; it’s nice to have those little darker, cosier spots,” Kerry says.

Regardless of function, each of these spaces demonstrates a skilful handling of both materials and light, combining the two to create elegant, inviting rooms. “The light was the starting point – we wanted to design a house that was beautiful in summer, winter, morning, afternoon, night,” Stephen explains. “Wherever you are in the house, you get a view of the horizon. We’ve been able to maintain that. The overall effect is incredibly calming.” 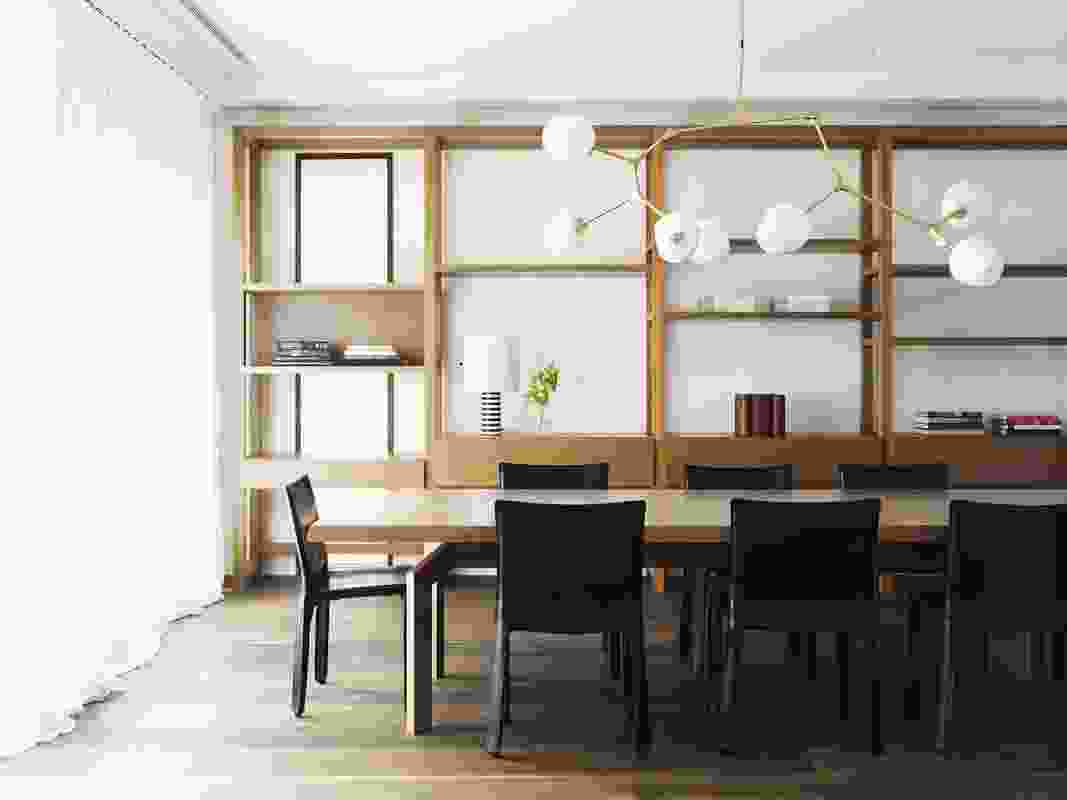 A series of open timber-framed units underpins the interior design. 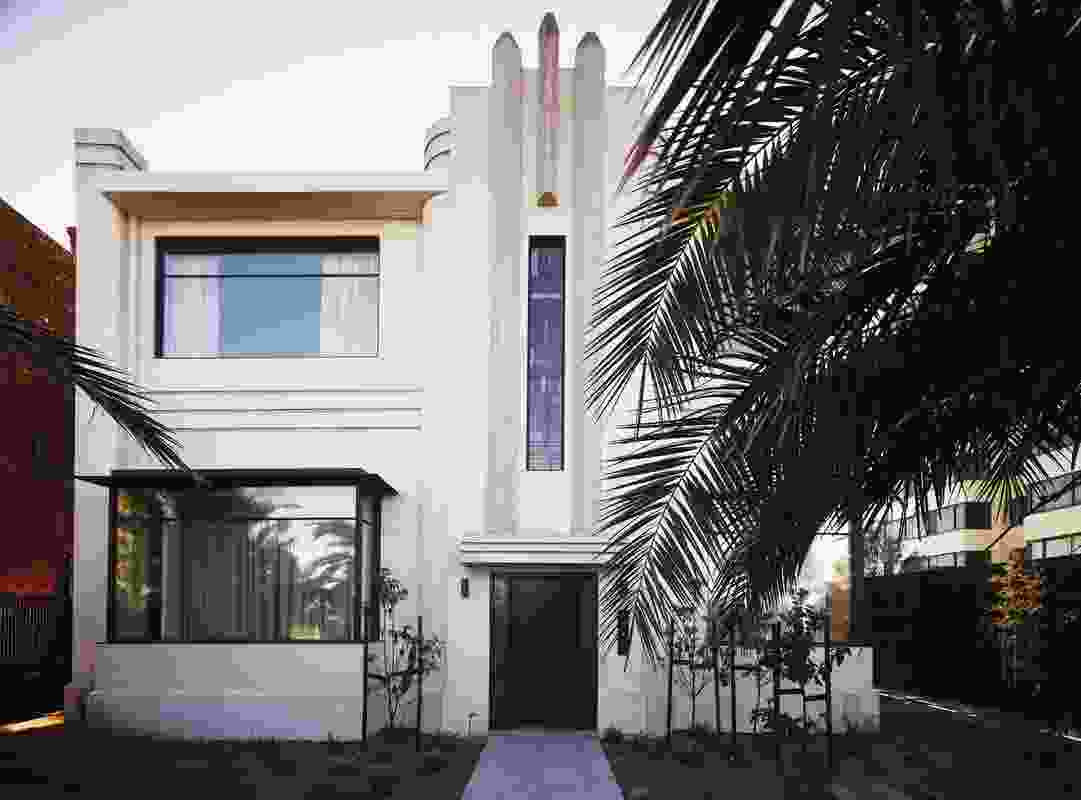 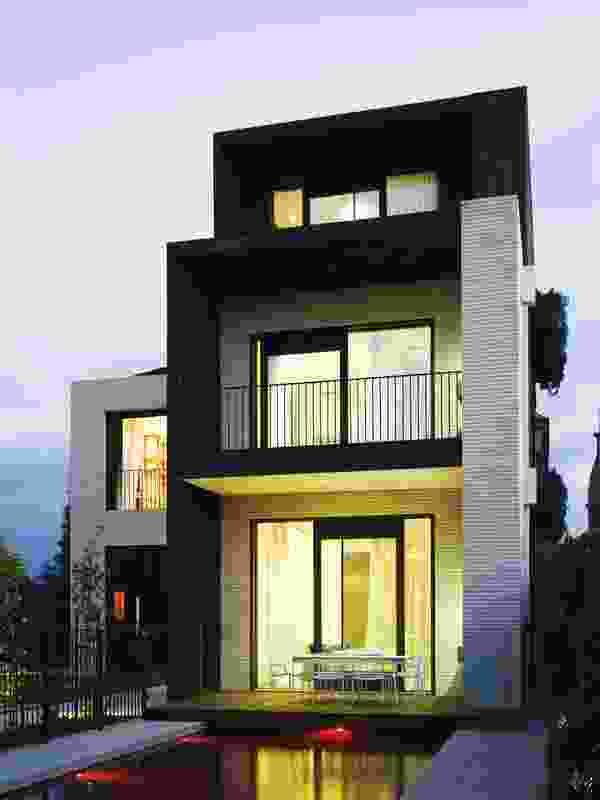 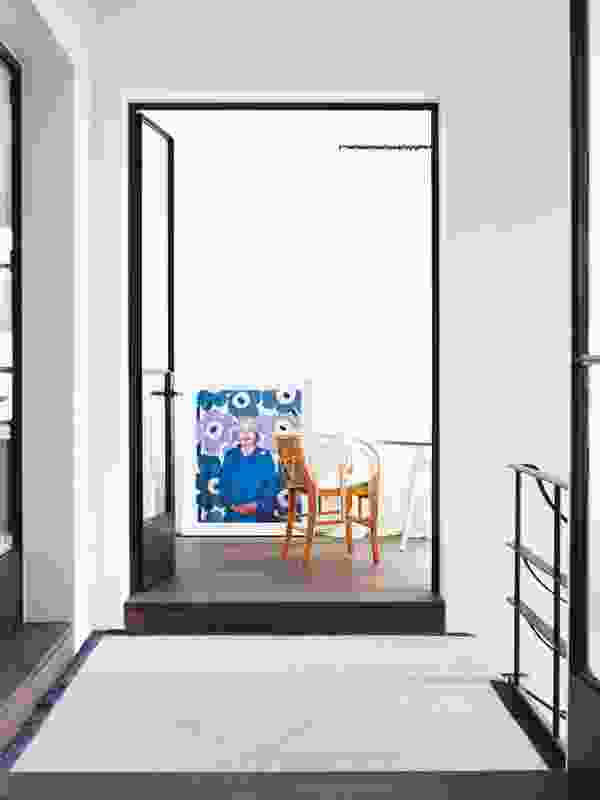 A two-by-two-metre “viewing” room at the looks out across Port Phillip Bay. Painting by Polly Borland. 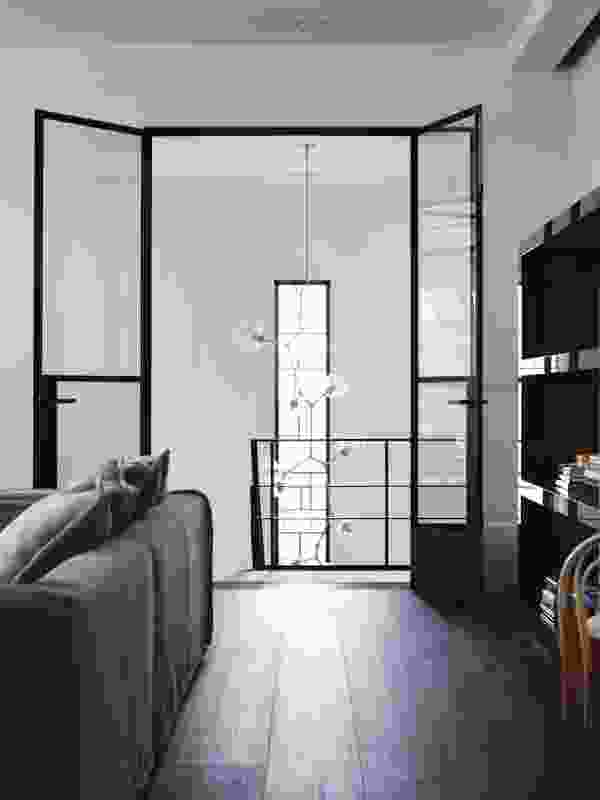 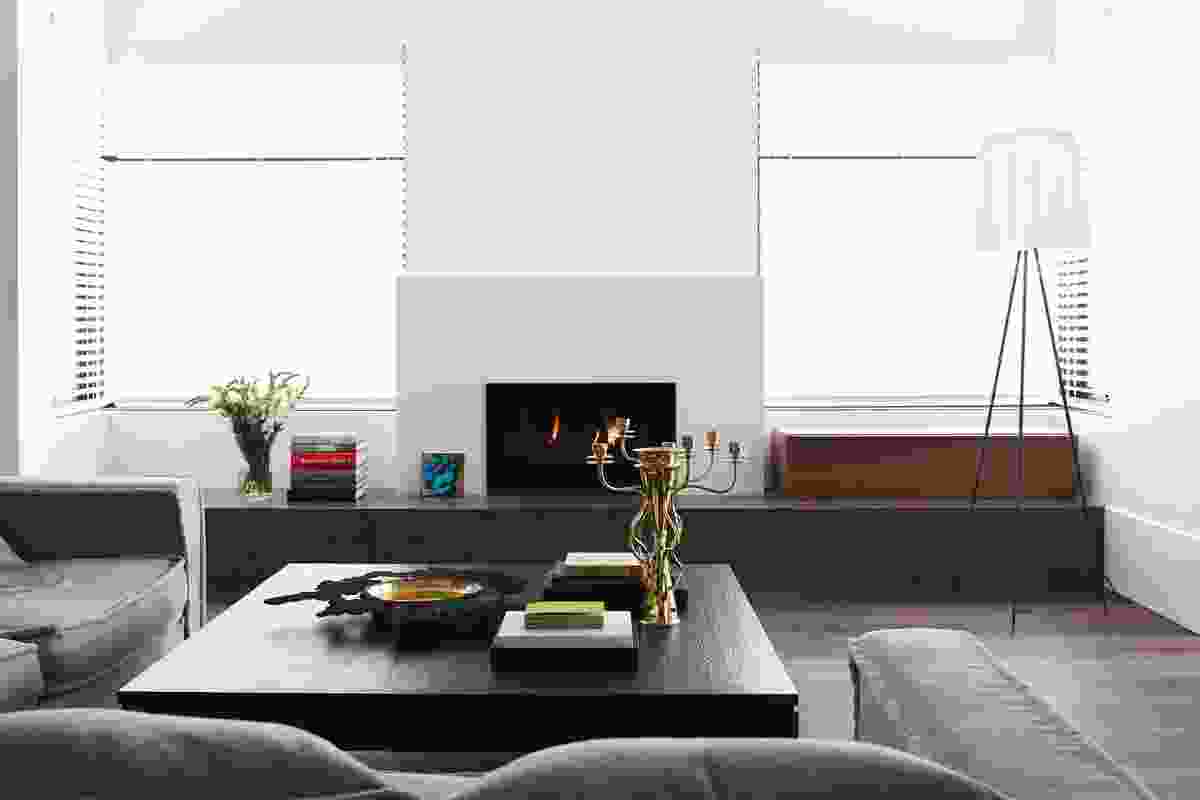 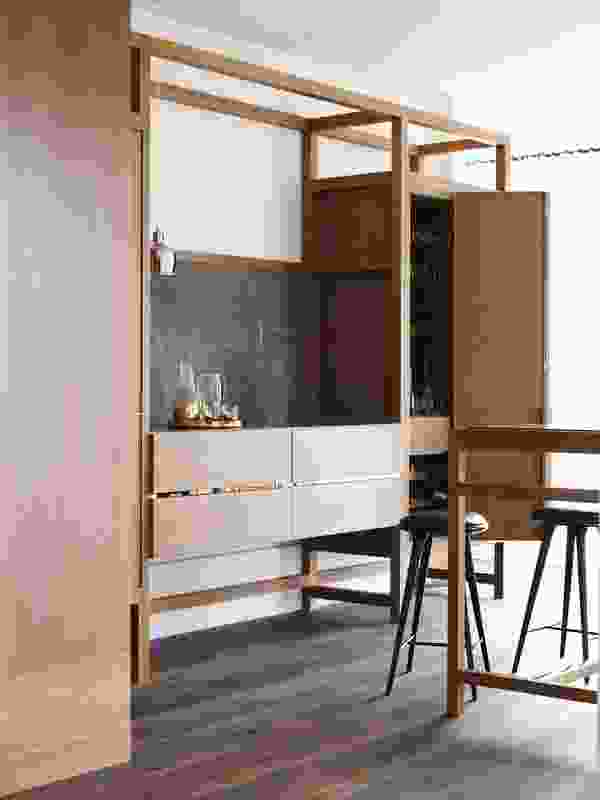 Intended as a masculine space, a timber bar extends from the dining room. 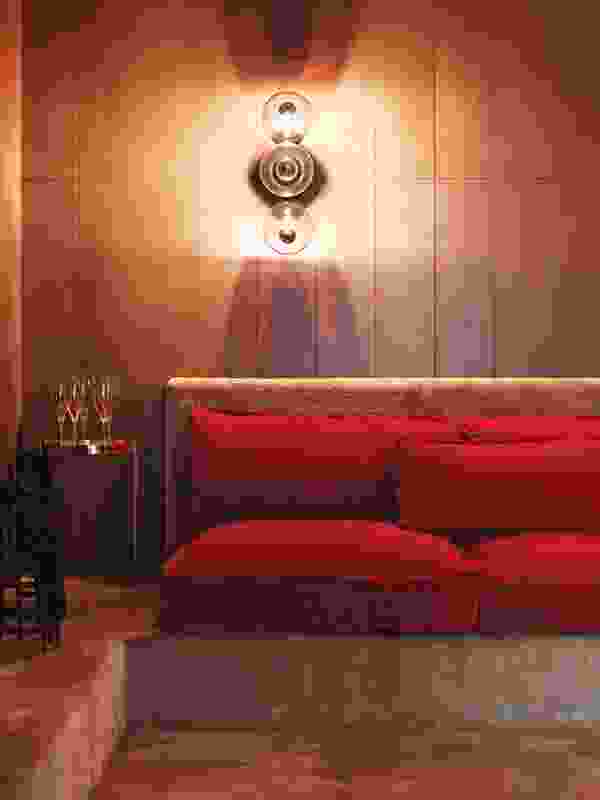 The more feminine champagne lounge is has timber-panelled walls and silk carpet. 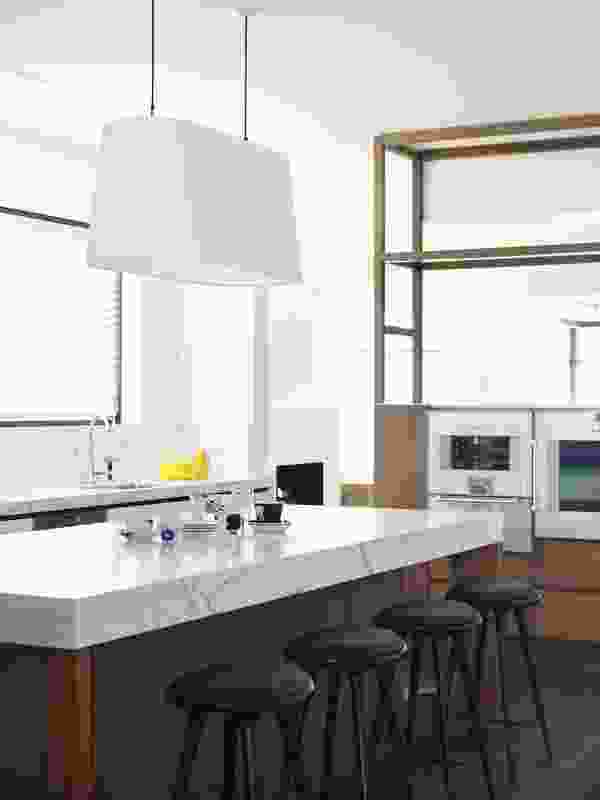