Simultaneously a contained and open structure, this calming sanctuary embraces its subtropical setting while defending the interior from rainforest insects.

The Mitti Street House by James Russell Architect sits below a narrow roadway at the end of a simple gravel drive. Huddled against the sun-dappled rainforest of Noosa National Park and within walking distance but not in sight of the little beaches characteristic of Noosa, this house has a low setting and close neighbours, meaning there is no compelling prospect upon which to gaze. Instead, the spirit of the place derives from the nearness of the ocean sensed from within the beauty of the grove: a quality of calming seclusion under a rising canopy of green.

In response to site conditions and in an act of ingenious architectural introversion, the architects have conceived the house as a simultaneously contained yet open world that addresses the sky and the encircling canopy of green. The house is part forest, part beach shack and is meant to feel like a “village” inhabited by a family and their friends.

From the outside, the house is a secretive, minimalist box – four-sided, partially elevated and with limited articulation. It gives nothing away as you approach, not even how you should enter. Informal access is over crunchy gravel, through a recess in a wall of storage in a service undercroft that runs along the southern boundary. Formal (and presumably less frequent) entry is across a pathway, through a gate in a black chain-link fence via a thickening tropical garden, the threshold between garden and house tempered by slide-away doors.

The secretive quality of the house is principally the effect of its diaphanous fortification: all four faces are veiled in black shadecloth to varying extents. From the outside, this material is visually impenetrable. From the inside, it’s an entirely different story.

While in plan the house reads as a two-level rectangular box pushed hard to the boundaries, only a portion of the box – a narrow “U” of space, effectively one-room deep – is enclosed in the conventional sense. This embracing form shoulders the protected north-facing “interior landscape” that is tautly wrapped in shadecloth. It’s a grand and surprising room, breathing and light-filled.

A stillness pervades the space but airflow can be conjured by tuning openings to the prevailing direction of breezes when the weather is warm. As storms mostly come from the south and south-west, the interior landscape is largely protected. During a downpour, raindrops are misted by the fine weave of the shadecloth, which is used as both a boundary wall and a partial roof, and it is switched with polycarbonate sheeting where waterproof cover is necessary.

The “public” spaces of the house are set upon a concrete piano nobile, a sociable platform distinguished by subtle changes of surface and level. Kitchen, living and dining spaces open onto garden moats, an L-shaped bathing pool and a sundeck with poolside lounge. Vertical rough-rendered forms, like the freestanding hearth and its rising flue, shape the communal character of this lush and playful stage like a subtropical version of a baronial hall.

Embedded in the modelled plinth, three instances of timber surface mark transitions between subtle zones: the landing of the informal entry off the service undercroft into the heart of the house, the platform step between the dining terrace and the pool garden, and an eastern threshold that brings in another entry from the undercroft but also opens with surrealistic directness onto a tennis court.

The least necessary number of slender steel columns are used and they support exposed ironbark beams that frame the roof and gird the house. In the manner of a beach shack, walls of white-painted compressed fibre sheeting line the long wing running east to west. This wing contains the children’s living quarters (arrayed like a “surf club bunkhouse”) upstairs, and storage and laundry/wet area downstairs. As the “U” pushes out into the void, the walls are almost black. These inky forms hold sleeping spaces for the adults in residence; the highest points in the hierarchy of privacy in this “village” talk back to the “heart.”

Up in the intimate heights of the house, “you’re into the frame and the making,” says architect James Russell, touching the ironbark beams in the snug space beneath the coincident form of the ironbark ceiling. Here you’re also privy to the tactical use of shade cloth set 900 millimetres beyond the glazing line. For all of its poetic effects, the primary practical use of this material is to defend the interior from mosquitoes and other insects. Setting the shroud beyond the window line is a much more easeful and spatially interesting solution than de aling with window and insect screen in the same plane.

Learning from repeated acts of building, architects hone and refine the idiosyncratic language through which their ideas are expressed. In the work of the best architects, there is always progress; each experiment fortifies the basis of evidence that emboldens discoveries and delights at the next appropriate opportunity. While the Mitti Street House exemplifies James Russell Architect’s ongoing discrimination and discipline in the use of building systems and materials more generally, it’s the particular application of shadecloth that breathes life into the heart of this dwelling, creating a sheltered grandeur that amplifies the sociality of the brief, while maintaining an intimate connection to the luxuries of the natural setting.

“The house is meant to feel like a ‘village’ inhabited by a family and their friends.”

Other
Custom-designed main dining table made by William McMahon. 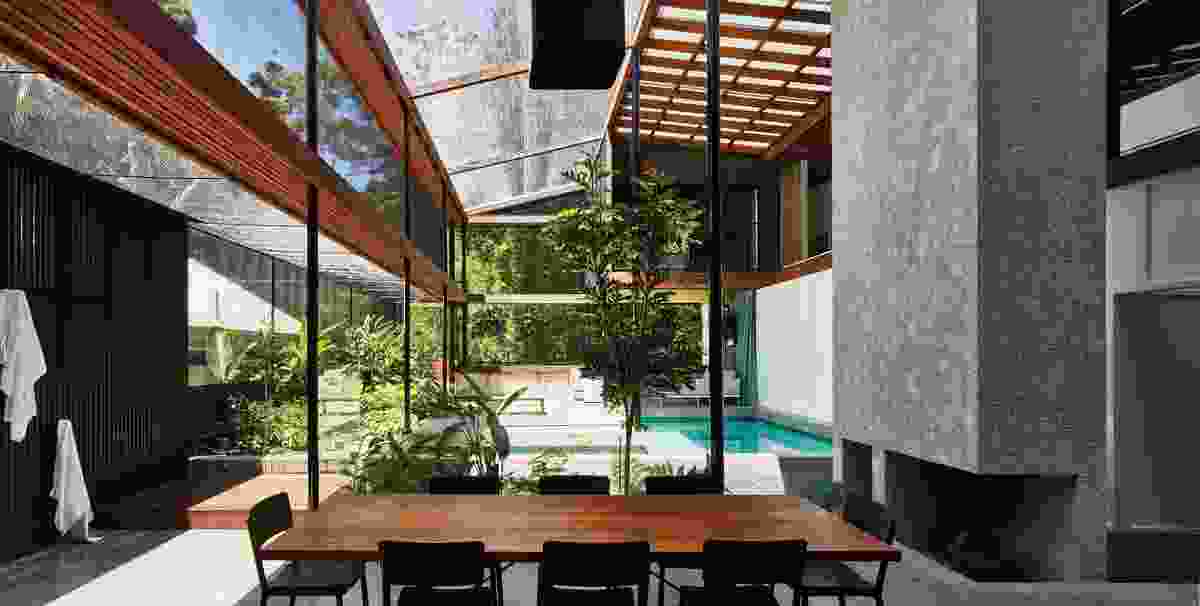 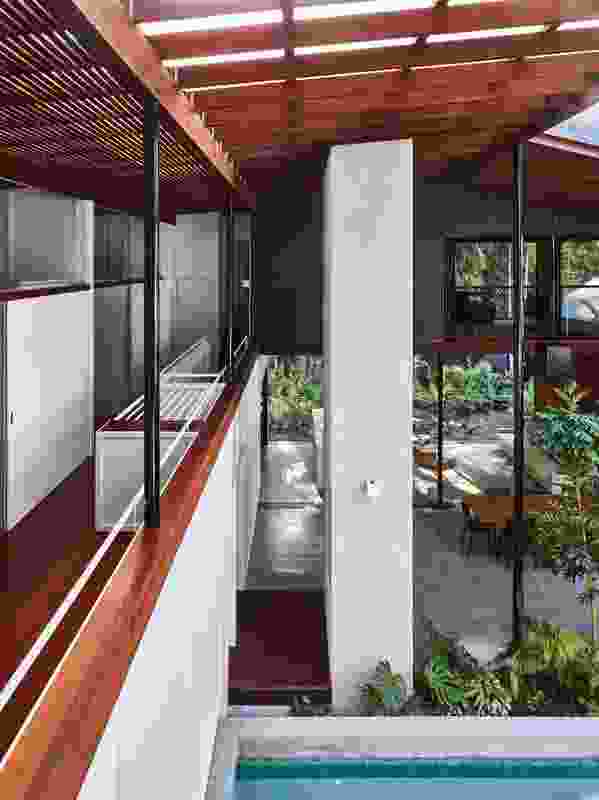 Vertical rough-rendered forms, like the freestanding hearth and its rising flue, shape the character of the grand communal space. 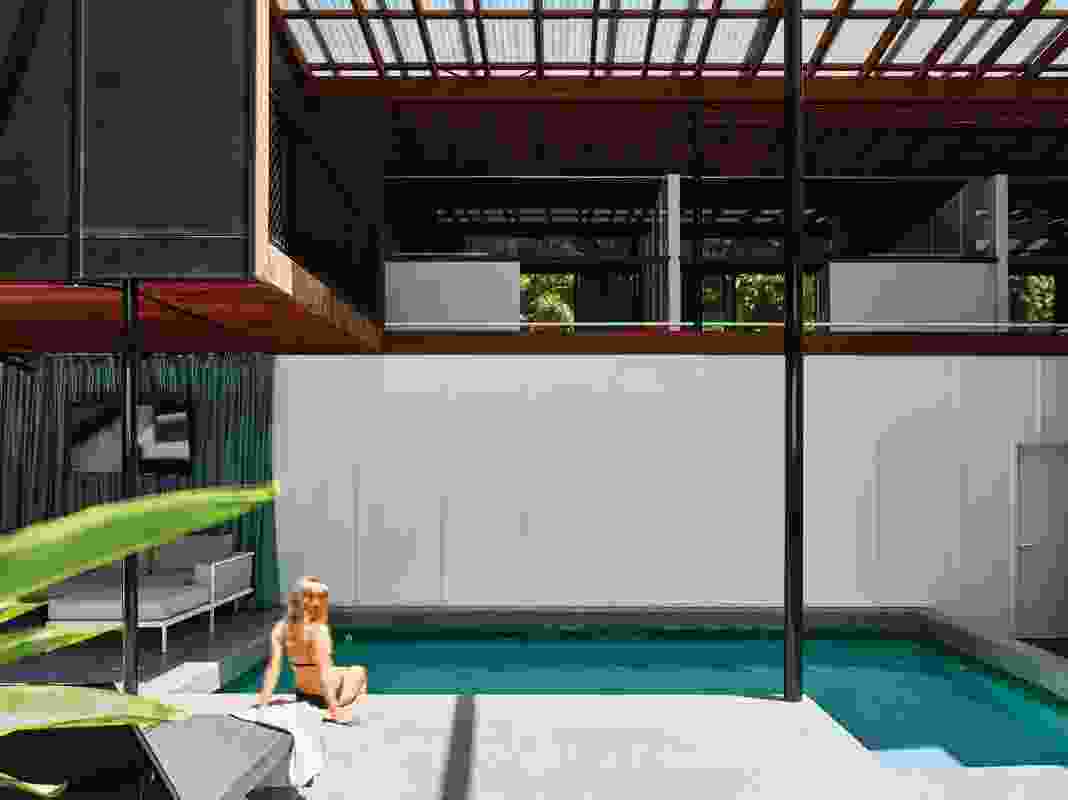 An L-shaped pool is positioned at the centre of the open-air, shadecloth-wrapped communal area. 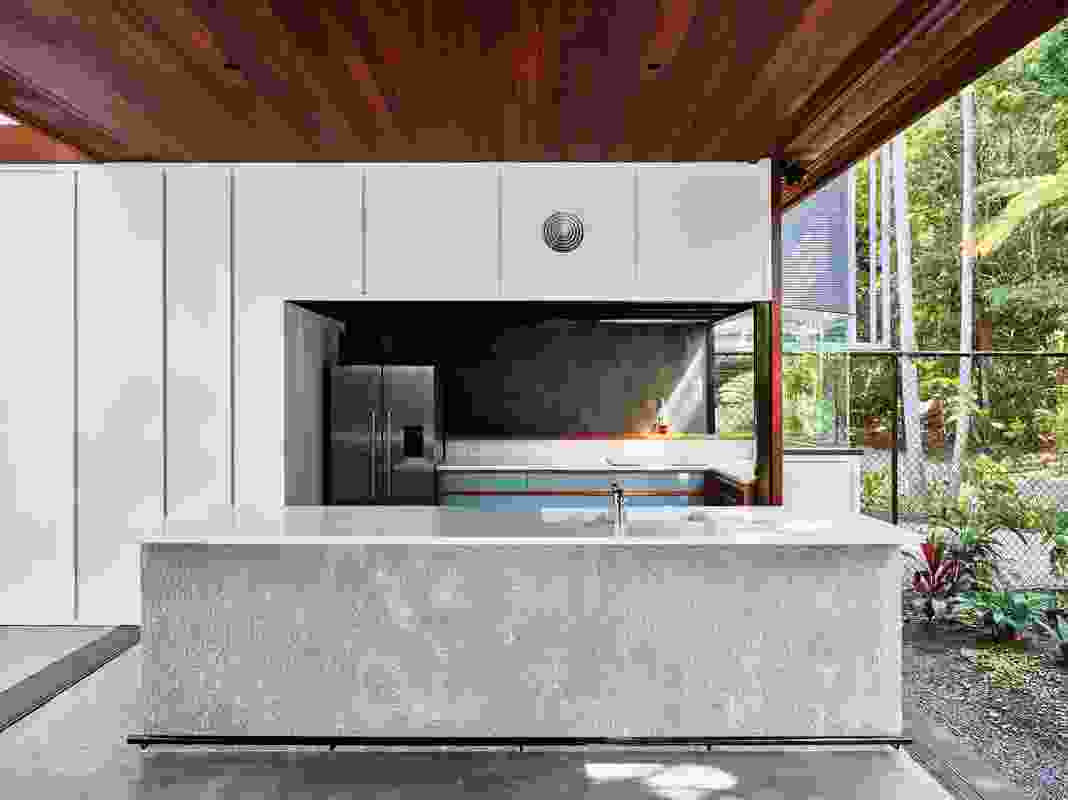 The threshold between garden and kitchen is tempered by slide- away doors. 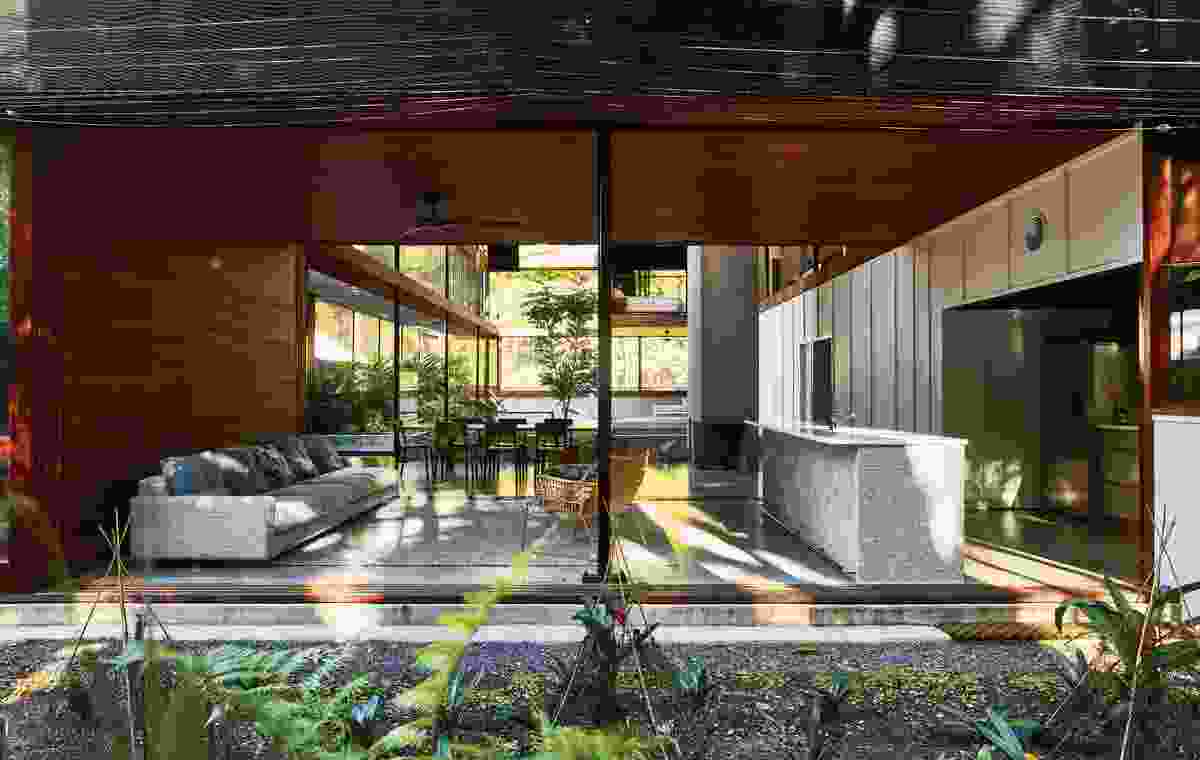 Subtle changes of level within the main communal area on the lower floor define different zones.