A hall for a Tasmanian Steiner school by Morrison and Breytenbach uses restrained effort to maximum effect.

While reviewing the Australian Institute of Architects’ 2011 Tasmanian Architecture Awards, I was struck by the range and complexity of the projects in the Public Architecture category – many of which were a result of the federal government’s funding for schools through its Building the Education Revolution (BER) program. These projects collectively demonstrated the dexterity of Tasmanian architects in leveraging quality outcomes from thin budgets and compressed time frames. Tarremah Hall by Morrison and Breytenbach Architects is no exception. Receiving awards in both the Public Architecture and Sustainability categories, this modest building for the Tarremah Steiner School Foundation sensitively engages with existing patterns of inhabitation while confidently prefiguring the future growth of the school.

Situated at the edge of the existing campus at Kingston, the hall extends the established spatial framework of courtyards at the school. Two “boxes” wrapped by a horizontal element that contains circulation and ancillary facilities frame a central external space. The smaller box provides music room facilities, while the larger box acts as a multipurpose hall for sports events, musical and theatrical performances and school gatherings. The central courtyard establishes a new public entry and acts as a pivot point between the existing school facilities to the north and the anticipated expansion of the school to the east.

Rather than attempt to conceal the bulk of the main hall, the music room is employed as a mediating device, maintaining consistency of scale with the existing classrooms and mirroring the form and materiality of the larger box. When viewed from the east, the sculptural and textural qualities of the building are most clearly expressed through the continuous macrocarpa skin to the end elevations, opening up to reveal the rhythm of the structural armature to the internal courtyard. Aptly described by the awards jury as “robust and muscular,” the architecture is clearly influenced by the rural vernacular and an anthropomorphic tradition.

The building is deceptively simple, but on closer inspection it reveals a quiet, considered complexity and a delight in the craft of building. As many components as possible were manufactured on site and were custom designed to maintain a standardization of elements and to minimize finishes. Plywood-clad ladder frames made of 140-millimetre-by-45-millimetre pine members form the main structure of the 6.7-metre-high, 16.5-metre-wide hall. The asymmetrical roofline and the continuity of the cladding over the eaves on the east elevation create a subtle playfulness and echo the cross-sectional form of the interior volume. Further, the limitations of the macrocarpa cladding are seen as opportunities for architectural expression through the positioning and detailing of the horizontal flashings and the irregular patina created by the weathering of the unfinished timber.

Internally, the plywood skin is protected with a coating of oil up to a height of three metres, creating a delicate differentiation between the base and the natural finish of the remaining wall and ceiling linings above. The continuation of the roof angle into the perimeter of the internal ceiling brings light deep into the space and washes over the gently undulating ceiling, which was formed by positioning battens against or below the line of the structural frame. A musical wave pattern of routed slots in the plywood lining, inspired by the form drawing of the Steiner curriculum, adds texture to the walls and further enhances acoustic performance.

The internal configuration is carefully articulated to maximize current and future usability, and supports its intended purpose as a facility for the broader community. Alcoves along the eastern edge of the main hall are designed to accommodate future retractable seating and are currently used as market bays for school fairs. Large glazed doors open out to the external courtyard and the hall floor forms another stage for performances in this outdoor room. The generously sized main stage itself could be transformed into a separate meeting room or learning space when funds are available to install acoustic doors. A commercial kitchen doubles as a learning space for students and a catering facility for functions and events, while the front foyer can be used for community meetings.

Underpinning such social sustainability initiatives is a clear environmental agenda that is supported by a quantitative analysis of performance. Most striking is the solar wall that comprises perforated steel sheets along the north facade of the main hall. This wall is capable of extracting up to 80 percent of solar heat gain and provides the primary source of the hall’s heating to a base of eighteen degrees. This system has additional health benefits as it increases fresh air rates without compromising heating. Automated controls are combined with manual operation of high-level vents to support the complexities of the diverse functionality of the space. The building also acts as a net carbon sink and uses materials with low environmental impact such as Superboard compressed mineral sheets, which are made with magnesium oxide rather than calcium silicate cement, and the low-emission Super E0 particleboard.

Tarremah Hall is a cohesive and highly considered piece of architecture that is informed by a strong sustainability agenda, yet the building remains productively unfinished. It requires completion – not only in the pragmatic sense through the planned ability to retrofit elements such as photovoltaic panels, water tanks and acoustic doors as needs and budgets allow, but more particularly by the user through their required interaction with the building. For me, this is reminiscent of Herman Hertzberger’s notion of buildings as frameworks that foster the freedom of everyday use through evoking rather than prescribing associations. However, as I discovered, it is also consistent with Steiner philosophy and demonstrates Morrison and Breytenbach’s perceptive and sensitive knowledge of its client, developed through a decade-long professional and personal relationship with the school. This has enabled the architects to extract every opportunity from the project, despite the limitations of the BER program structure, and illustrates what can be achieved with minimal means but with cohesive aspirations.

Ceridwen Owen is an architect at Core Collective, and the architecture program director for the School of Architecture and Design at the University of Tasmania. 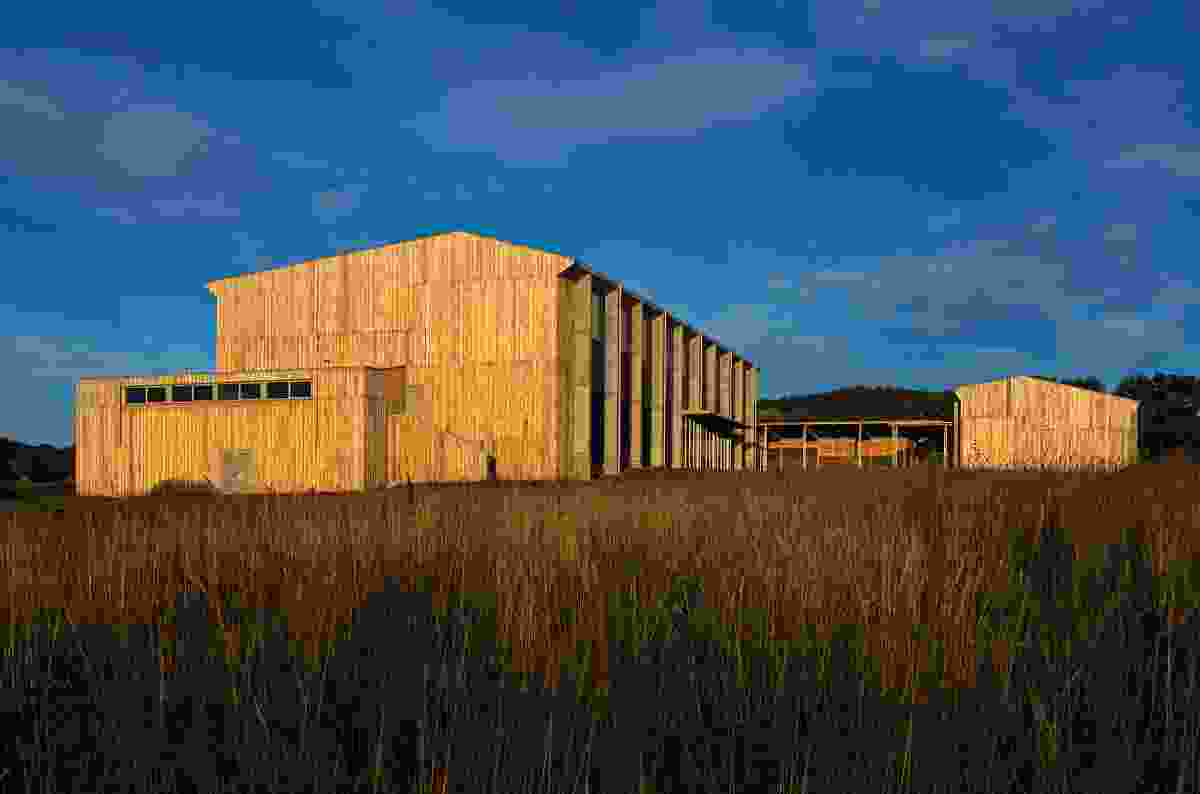 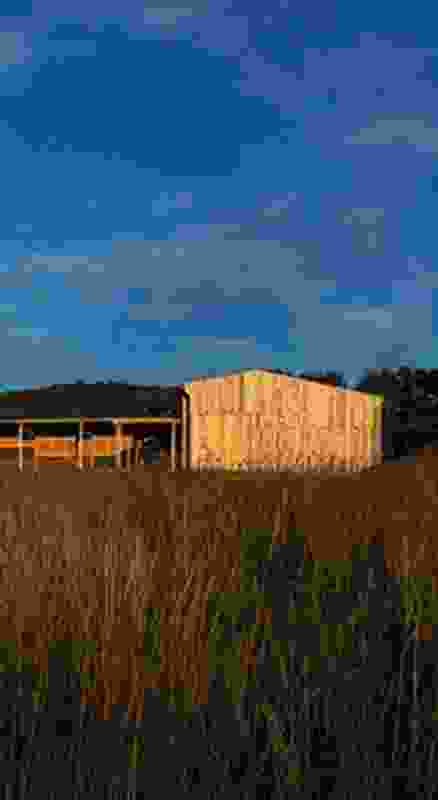 The continuous macrocarpa skin wraps around the building to create a robust form. 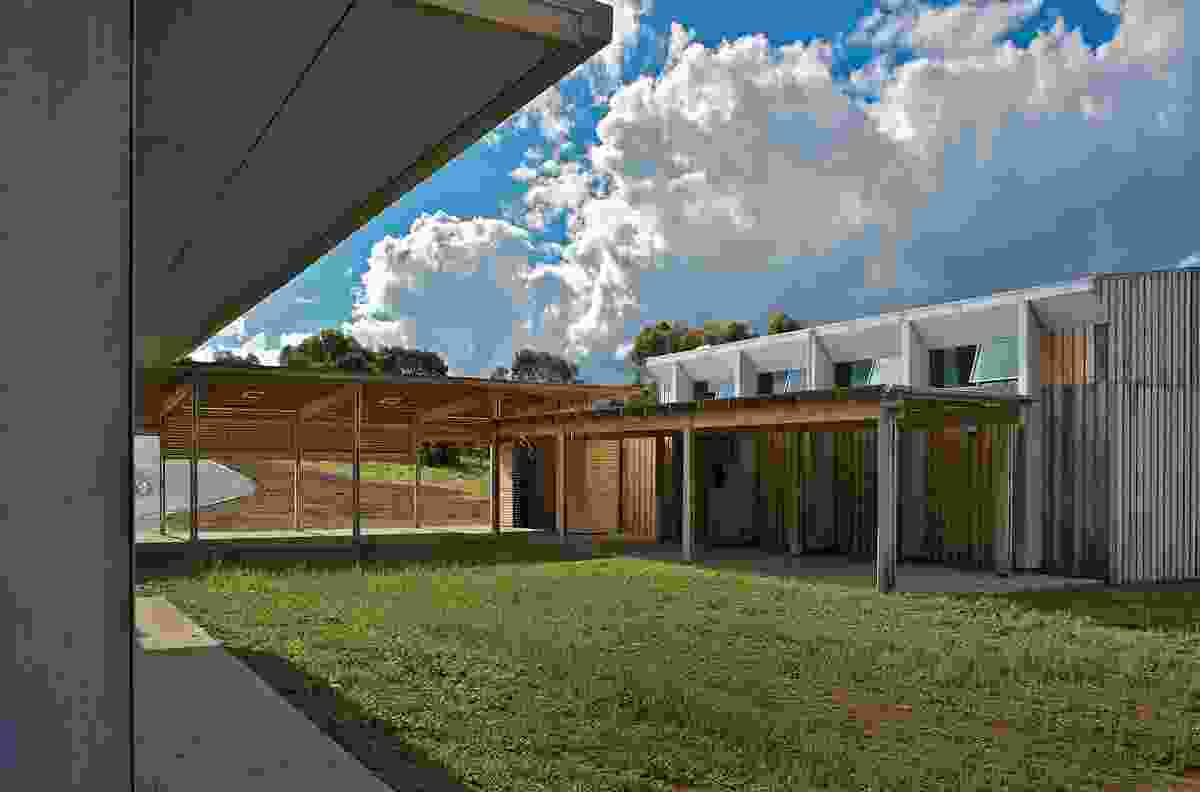 The buildings frame an internal courtyard, where the structural armature is revealed. 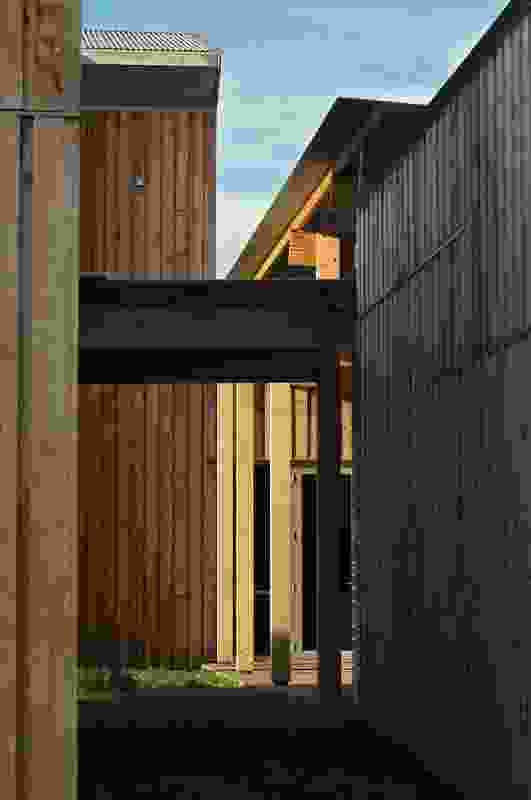 The minimal palette of materials across the cluster of buildings is deceptively simple, including the irregular patina created by the weathering of timber. 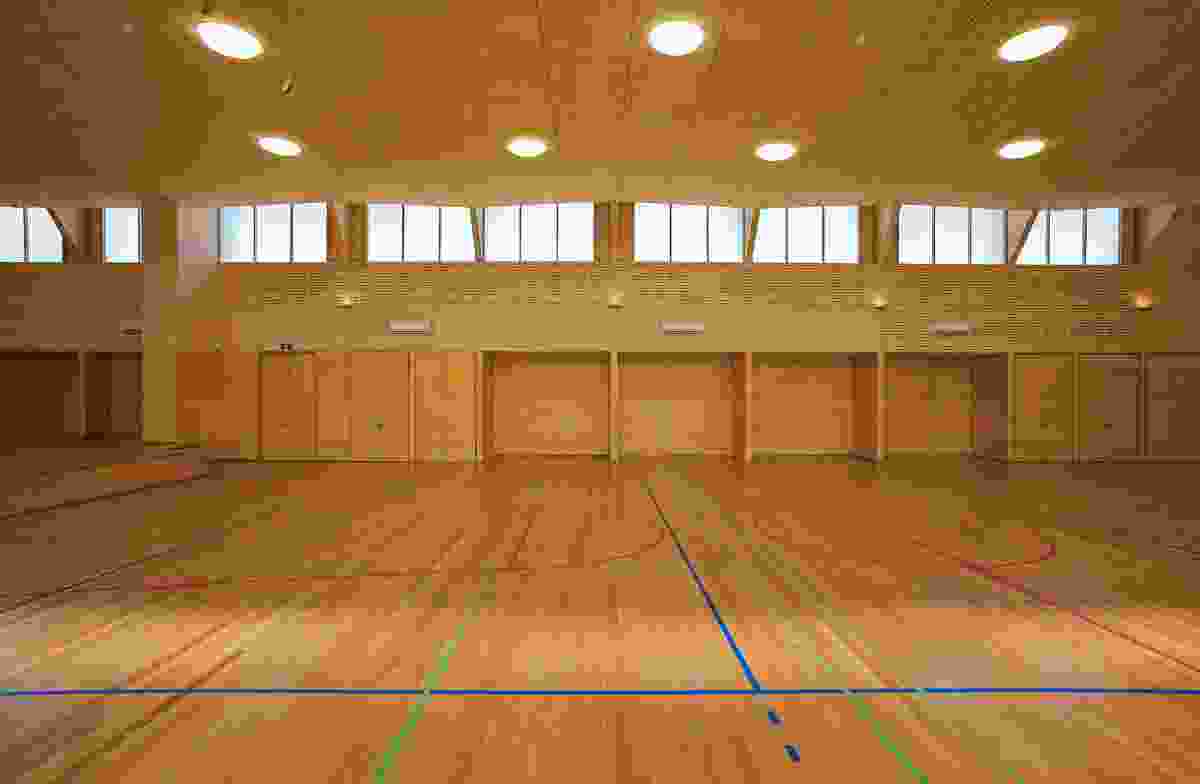 The main hall provides space for a variety of uses by the school and wider community, including performances, sports events and school gatherings. 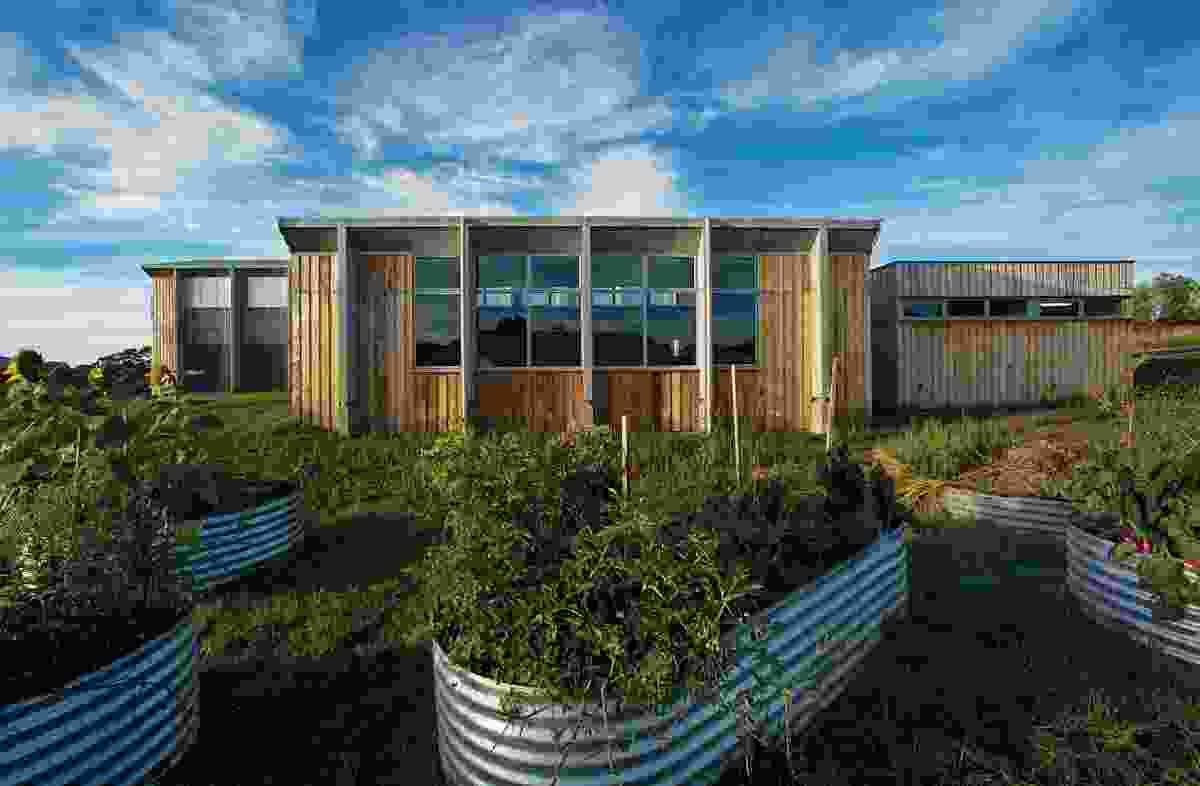 Tarremah Hall is informed by a strong sustainability agenda.