Set over the retained edge of a reformed ground plane, the new pavilion appears to float.

This home in Brisbane’s Morningside, designed by Kieron Gait Architects for a couple and their three young children, was founded on a particular legacy. Next door to the high-set weatherboard bungalow lives the woman who grew up in the house; her father built the home on the generous double block in the 1920s. Over the years her father also constructed many other homes in the neighbourhood, including her current house. The prospect of an estate sale threatened the treasured dwelling – what would be its fate in the hands of a new owner? Emphasizing their long-term intentions for the property, new owners Andrew and Kate sealed their purchase with the promise that the house would continue intact as a family home for themselves and their three children for many years to come.

When the first stage of architecturally reimagining the old house was undertaken, a builder was already at work making basic repairs and tinkering in an “archaeological” way, says Kieron Gait. While “settling the big moves” to reconfigure the traditional floor plan to gain sufficient bedrooms and bathrooms and facilitate the connection required for an extension, the architects joined the builder’s “discovery” process. A memorable story of time, texture and material was explored. Serendipitously working with the builder’s findings – such as a termite-ravaged portion of VJ boarding in the bathroom – the architects layered delicate interventions over the old bones. The treatment to excise the damaged timbers and permanently expose the studs and bracing created a rustic ground against which the figures of a bright circular mirror and a new steel vanity float and fold, washed in sunshine by the skylight. A similar tactic of distinguishing intervention against original fabric was used to insert an ensuite into the former entrance hall.

With the house renovation complete, the larger vision of extending the home was realized. The next steps engaged the entire terrain of the property to connect the daily life of the family with the outdoors. With the street to the east, the existing house sat centrally and forward on the block, which slopes gently from the back boundary to the street front. While building new space along the southern boundary was the ideal to maximize northern exposure to the generous open space behind the existing house, the clients also sought a direct connection to the ground, to allow their children to run freely from the house to the yard.

The ground at the rear of the house was reformed into a new landscape, built up by 1.2 metres and flattened into an L-shaped lawn and pool. In the north-western corner a hillock was fashioned to create another dimension for play and establish a novel position for looking back over the site toward the east. A new pavilion containing kitchen, dining and living spaces is positioned along the southern boundary, offset from the house, perched at the edge of the newly formed landscape. This placement gives the dwelling a new fulcrum and focus in an outdoor room at the eastern end; a distinctive threshold in the elbow between old and new.

The transition is screened with fine steel sections that also secure the private landscape. From the new welcome point, a little slip of space connects across and up a few steps into the existing house, which, in contrast to the openness and sociality of the new building, is a private retreat. It’s an exciting moment in the experience of the home, to sense these relationships between the existing and new interiors and the reformed landscape of the yard. Throughout the day, the family lives in the pavilion, garden and pool. As evening descends and the children go to bed, Kate and Andrew can continue to enjoy their place in a different mode.

The new pavilion is elegantly economical in expression and material. Set over the retained edge of the reformed ground plane, it appears to float; the outcome of refined architectural tactics such as the distinct separation of the line of structural support from the line of enclosure. The southern and western walls and the roof are composed of insulated sandwich panels attached to a laminated veneer lumber frame that is painted and exposed to the interior. “You can see the skeleton, which I love,” says Kate. Exposing the frame in this way reveals the new as kin to the old. “It’s part of the same technology family as the old house, while also completely contemporary in its sense of space,” says Kieron. A “tide line of richness and texture” is established by the built-in elements of the kitchen and deep-set banquette seating and storage, the figuration in the spotted gum in combination with the painted frame creating a sense of bespoke luxury. The other walls are glazed and peel away along the eastern and northern sides, to open the pavilion to the outdoor room, the garden and cooling breezes.

Now with the vision complete, the amenity of this home is endlessly appealing to the growing family. “It’s not your typical extension, like building up or building under. It is so open and it feels completely right with our climate,” says Kate. And their neighbour approves. When Andrew recently showed her through the house, she was thrilled by the architects’ reinvention of her former family home that will provide for another lifetime of loving and lively occupation.

“It’s an exciting moment in the experience of the home, to sense these relationships between the existing and new interiors and the reformed landscape of the yard.” 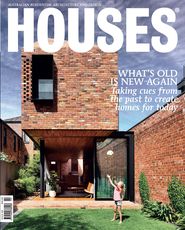 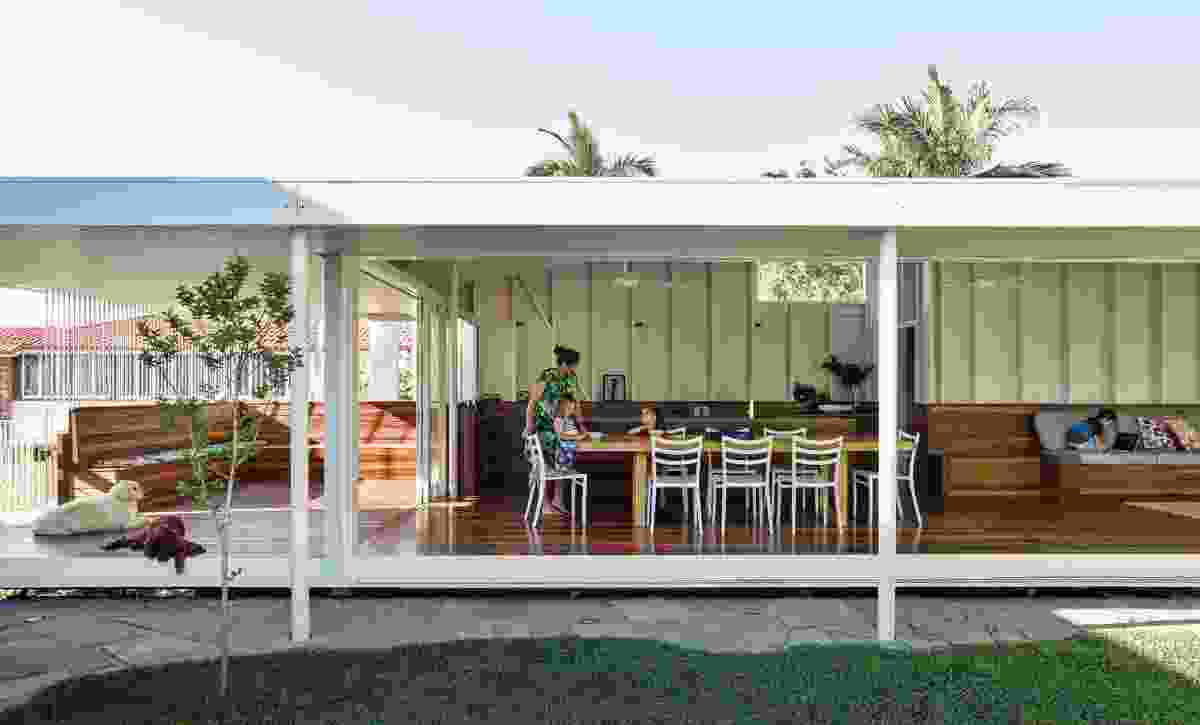 Set over the retained edge of a reformed ground plane, the new pavilion appears to float. 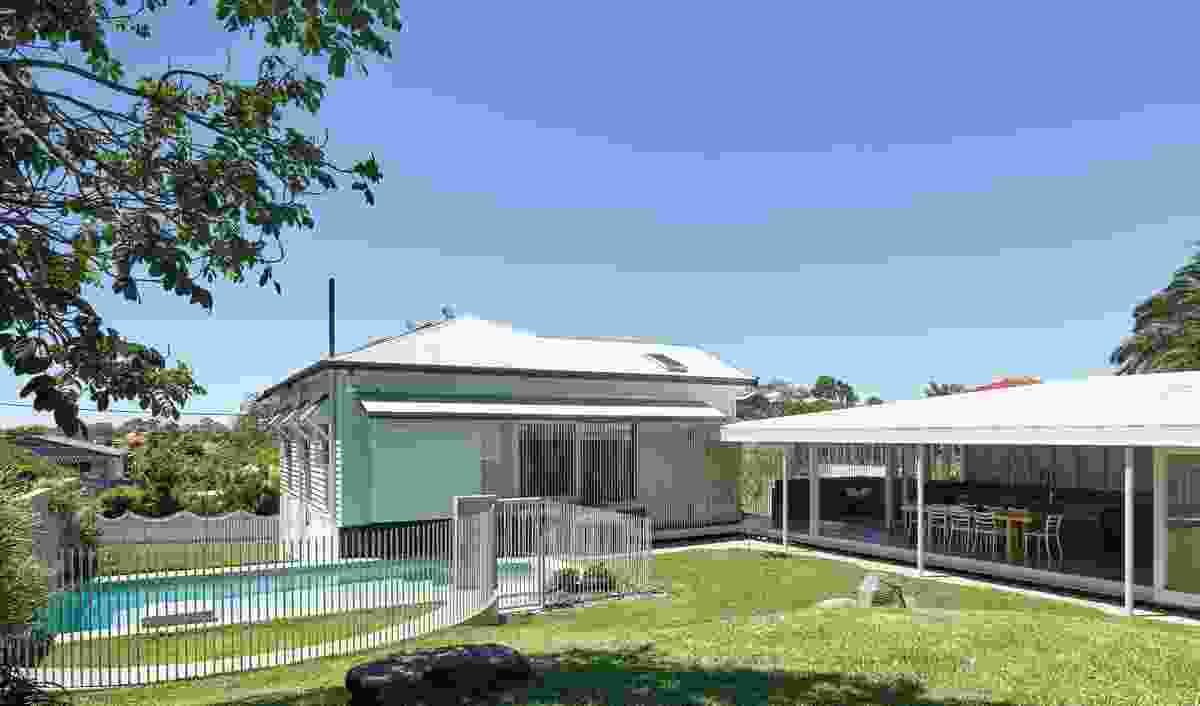 With the existing house to the east, the new pavilion is built along the southern boundary to frame the garden. 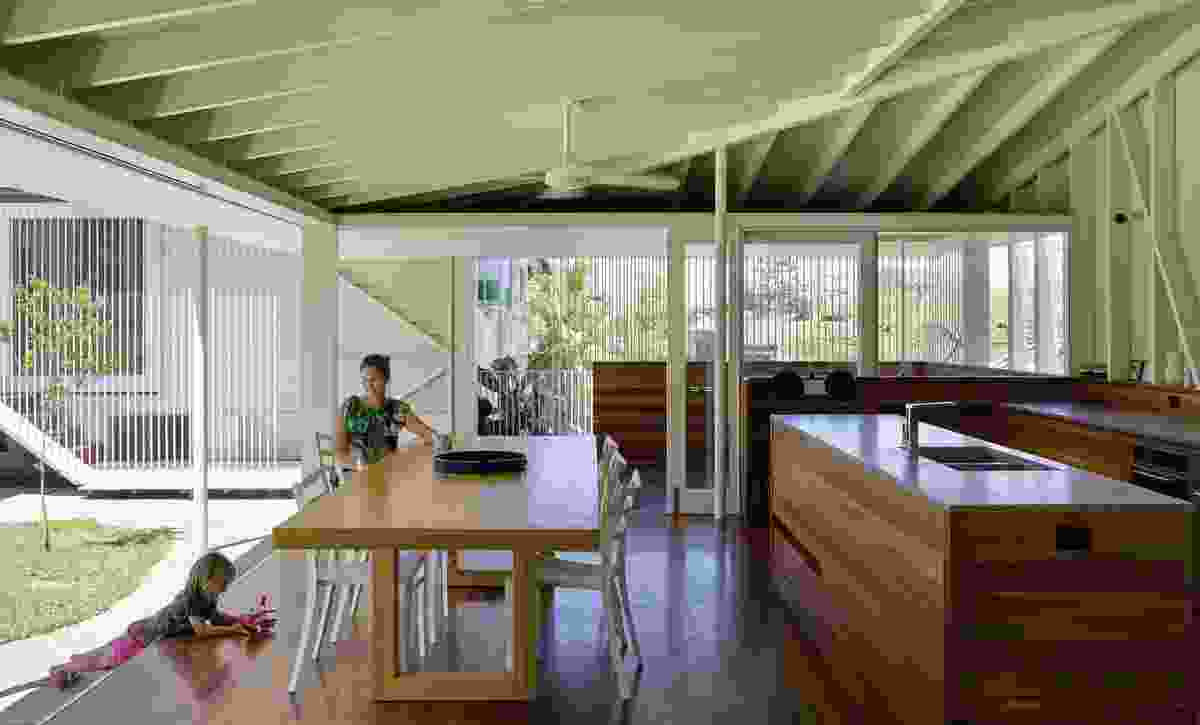 Opening up to the garden to the north, the kitchen, living and dining spaces encourage breezes to filter through the site. 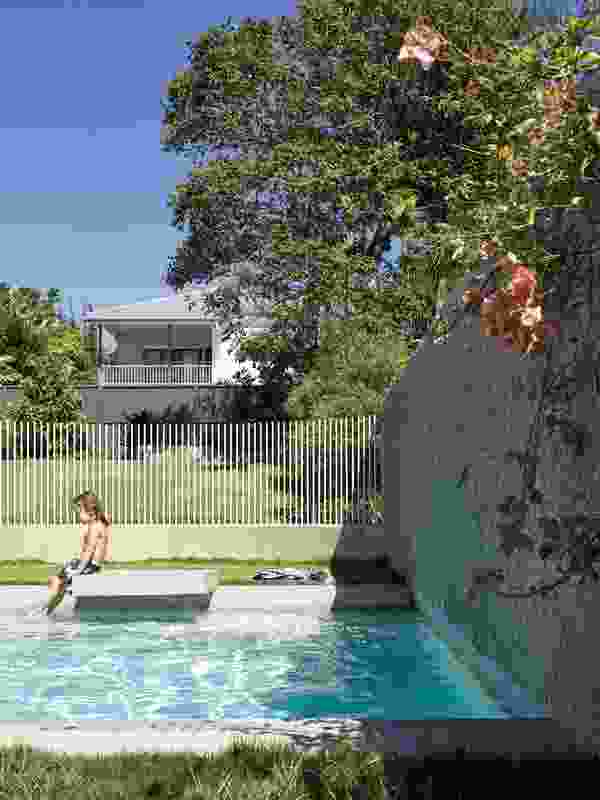 Fine steel elements are a motif that tie the old to the new and secure the private landscape. 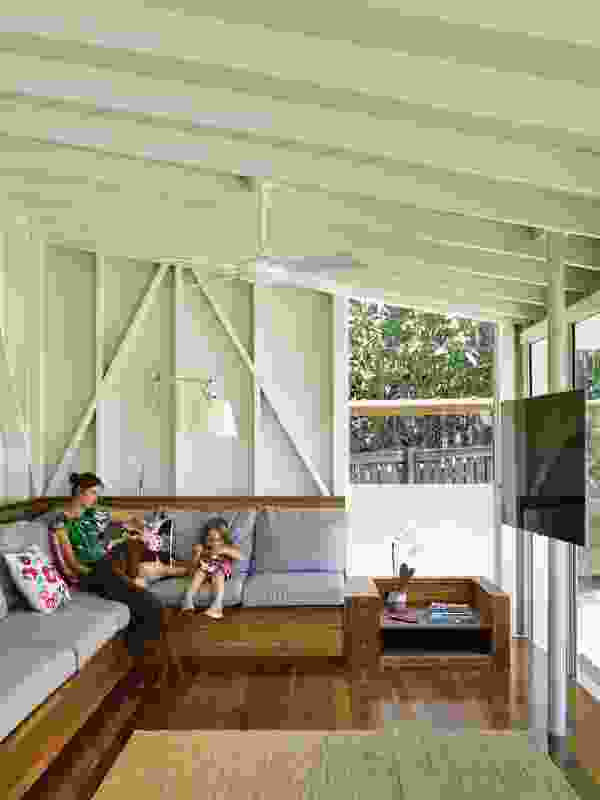 The exposed frame reveals the new as kin to the old, as it is in the same “technology family.” 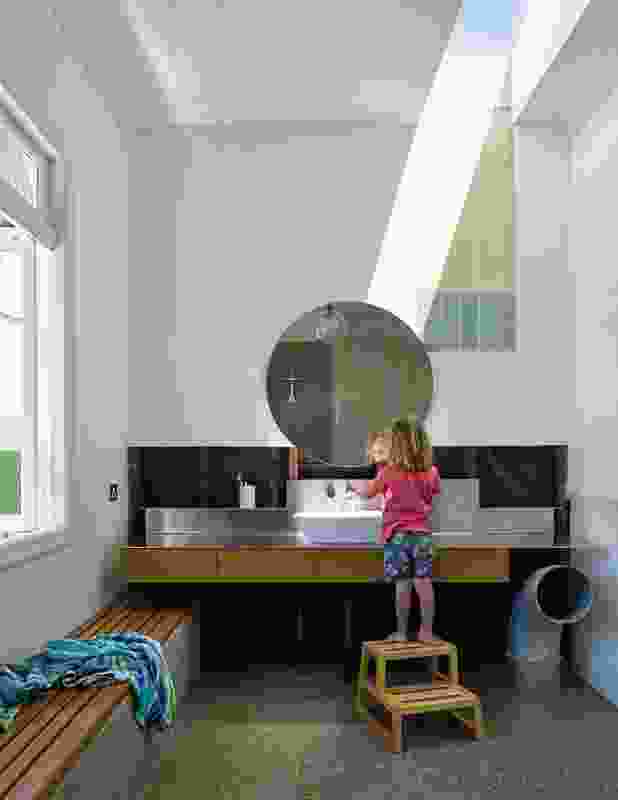 Exposed studs and bracing create a rustic background against which the vanity and circular mirror float. 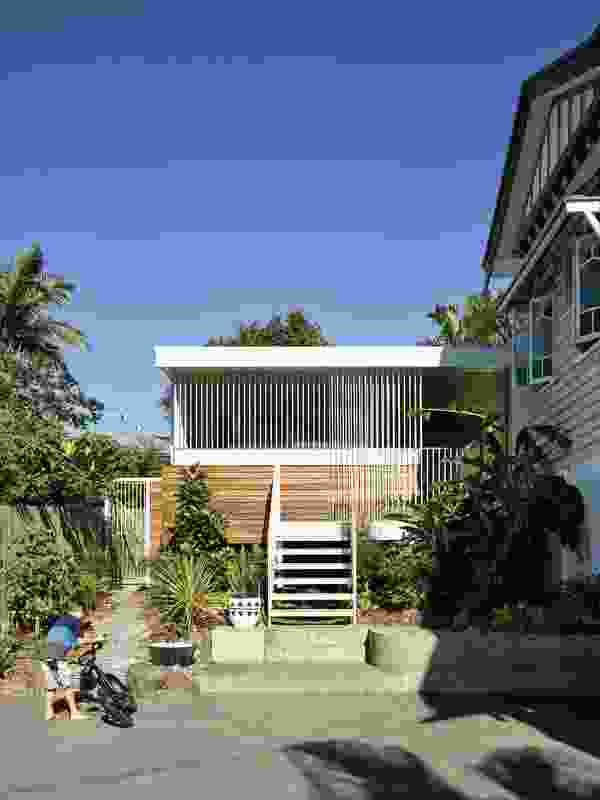 The new welcome point provides a sense of the relationship between the wide-open pavilion and the existing house. 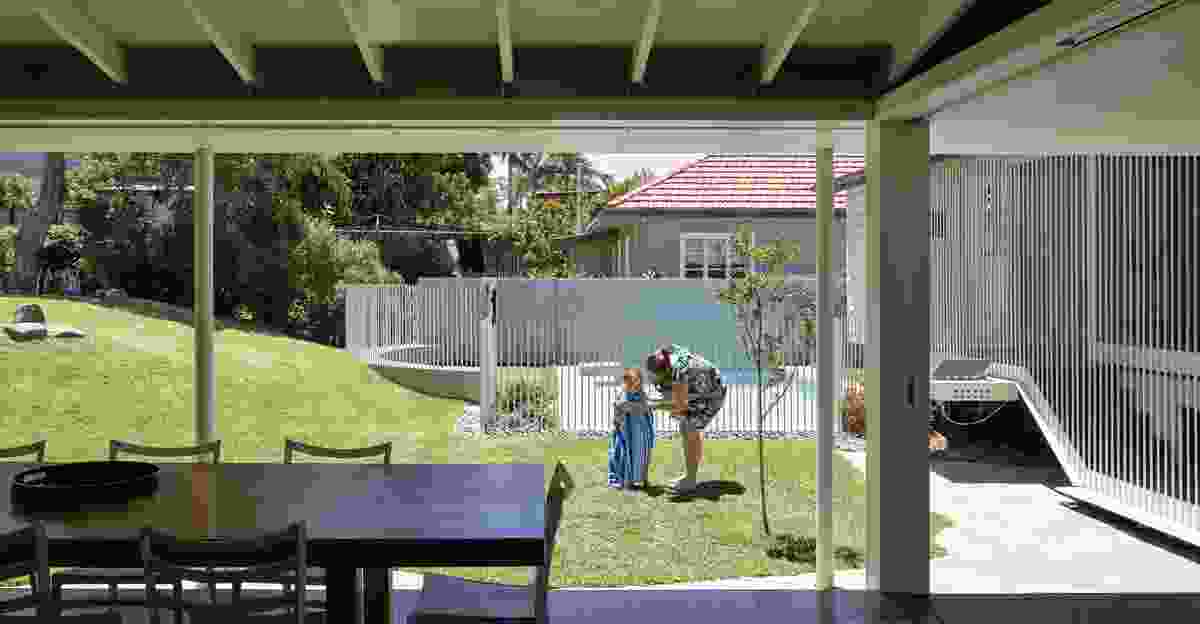 The ground at the rear of the house was built up and reformed into a new landscape designed to suit children’s play.