Boston-based architect Moshe Safdie was in Melbourne in October 2012 to unveil the design of Monash University’s new school of music: “a building … where campus meets community” he says. On a prior visit, Michael Roper spoke with Safdie about his seminal projects.

Michael Roper: In Australia there has been a recent focus on the role of architecture in education. In the wake of the GFC, the government released a stimulus package called Building the Education Revolution. At the same time, Frank Gehry is building a business school at UTS in Sydney, Peter Cook (and CRAB Studio) an architecture school at Bond University in Queensland, and Nader Tehrani (NADAAA) is engaged with John Wardle Architects to create a new architecture school at the University of Melbourne. Now Monash University has invited you to design the Sir Zelman Cowen School of Music. Can you tell us a bit about the project and your vision for it?

Moshe Safdie: I think it’s about a building that seamlessly flows in its public life from the indoors to the outdoors. I call it the building of all seasons; I think it should transform between summer, winter, fall, spring. It’s also a building that’s about where campus meets community, there’ll be concerts and performances that will draw the public into it, and it’s an opportunity to celebrate that in the architecture.

MR: Architecture’s civic role has always been acknowledged. How do you ensure the less tangible, social objectives of architecture find their way into the project development process?

MS: Architects are guardians of the intangibles. When you’re designing a museum or a public library, often the brief will include concerns about community. For the Salt Lake City Public Library, the librarian and the committee talked about creating an urban room that’s open twenty-four hours a day where the community and library merge, and the services offered should go beyond books and web services to become a place of culture for the city. But when you do commercial projects, that’s rarely in the brief.

When we were commissioned to do Marina Bay Sands (Singapore), our immediate client was a developer, but it’s the city who said we want a building that’s extroverted, where the public spaces are truly public. Creating a workable, meaningful public realm is perhaps the toughest thing for an architect to achieve.

MR: So with Marina Bay Sands, was there an understanding from the developers that a successful integrated public realm was ultimately to their benefit?

MS: Most developers left to their own devices would end up with a totally introverted shopping environment. In our case they did something extroverted that completely turns its face to the city. But the next significant step in the process at Singapore was that the public interest became a voice in the process. When they sold the land, they didn’t go to the highest bidder, they fixed the price of the land and chose a scheme they liked best. So there’s a lot for cities and other jurisdictions to learn about how critical the role of the public sector needs to be, because the market has short-term view, not a long-term view.

MR: You speak about the idea of humanising the megascale as a way of addressing the pressures of rapid urbanisation. Architects like Urban-Think Tank and Alejandro Aravena appear to share your objectives, yet their focus is on drawing lessons from informal slum developments with an interest in upsizing the microscale. This presents an interesting counterpoint to your approach. Is “megascale” necessarily the answer to an increasingly urbanised world?

MS: Well I don’t disagree with them. I upsized the micro scale in Habitat – you could say it was a contemporary way of making a high-rise village. It ruined the vernacular experience of the hill town. It tried to recognize the scale of the individual house within the fabric of the whole community. But I think that as the densities quadruple and quintuple and so on as they do, you enter the question of optimal mixed use. You can’t ignore that, because the future development is a mixed-use development where work, employment, commerce and culture are within singular structures, so there are often questions that are new to us. The new circulation problems, for example, the idea that everything is accessed from an elevator on the ground that goes all the way up is ridiculous. It doesn’t work. You’ve got to have transfer points, horizontal connectors. That gets you into questions of fractalization of surface and thinking of movement as a complex system of veins and arteries that serve a complex development which Marina Bay begins to hint at.

MR: And these are ideas that you were tackling way back in your first project, Habitat ’67. Habitat ’67 really re-set the goal posts for high-density housing. You were integrating the amenity of suburban living, fresh air, gardens, privacy, social integration into an urban apartment building. Apart from establishing your international reputation as an architect, to what extent did this project establish the foundations of an ongoing agenda for you and your office?

MS: Well, it’s been cyclical, because after Montreal, I had many commissions to do habitats. They’re well documented in a book we did at the time none of which I built. So there were ten years of these things getting designed in detail but not getting built – for a variety of reasons. Many different locations, New York, Washington, Tehran, Jerusalem. So there was extraordinary frustration. The late 1970s were very bad for urbanism. I was doing cultural buildings all over, but very little urbanism. That’s changed in the past ten years which is fascinating. We initiated in the office an annual research program where we bring in research fellows and three years ago we did a study revisiting Habitat.

MR: Like Le Corbusier’s Radiant City (with notable differences), Habitat ’67 suggests a belief in the idea that social harmony can be constructed. Is this an ideal you subscribe to?

MS: I think a social opportunity can be offered which is a bit more modest. When I designed Habitat in Montreal, I said this will allow people to live in the city with a sense of community because they cross the same streets, they share roof gardens and grounds. In fact, Habitat has probably a stronger sense of community than any apartment building in Canada. So there’s no question that architecture facilitated a kind of a social relationship a conventional building would not.

MR: Perhaps you are familiar with the work of Melbourne artist Callum Morton – I believe his father worked on Habitat ’67 around the time of Callum’s birth. Fittingly, Callum made Habitat ’67 the focus of one of his pieces.

Callum’s work often satirises modernist ideologies, exploring the disjunct between heroic architecture and the banality of the everyday human experience. In his piece entitled Habitat, Callum presented a scale model of Habitat ’67, and saturated it with the prosaic soundscape of suburban life – humorously highlighting the realities of communal living.

He said of a similar project regarding Mies’s Farnsworth House that he was ‘taking the individuated iconic form and corrupting it with everyday life’. He seems to suggest that architecture is a mere backdrop to the immutable realities of daily life. Do you think this is a fair critique of the role of architecture?

MS: I think it’s a reality of architecture. And I think that one of the interesting questions in doing residential buildings, but also beyond residential, is to what extent is there armature, the infrastructure capable of accommodating the shifts and changes that occur. When you go to Habitat today, almost fifty years later, there are greenhouses added, and a pattern of forty-five years of habitation and it holds, it can handle it. You go to a Mies van de Rohe project, and somebody changing the colour of the curtain becomes an affront, you know?

MR: I understand Habitat ’67 has been significantly modified by its occupants. You have said there is no greater joy than seeing a building become its own place, you refer to it as “cutting the umbilical cord”. Like a parent, does the architect have an ongoing role in the life of their buildings?

MS: For me it’s inescapable, you know I’m back there two, three, four years later. I give them advice, sometimes sought after, sometimes not. It’s fundamental to your learning. If you don’t do it you just don’t learn from what you’ve done. It’s like the responsibility of a parent. You don’t just give birth, you follow up, direct, and nourish your offspring. And I think that the clients, whether they’re institutions or individuals or whatever, there’s an education process for them as there is for us in the process. It must continue after they move in.

MR: There appears to be a shift in your work since Habitat. The lineage is present in the articulation of the garden rooftops, but where Habitat is characterized by variety and porosity, your more recent projects appear to be more standardised and dense. What is your current trajectory and do you remain as optimistic about the city as you once were?

MS: I think the reduced porosity is the result of greater density and intensity. But I think where in Habitat the porosity is micro, I tried to achieve the porosity now at a more macro scale. There’s a moment in which we need to recognize that there’s a limit to density and that dispersal is more appropriate. That will not happen without some brilliant breaks in urban transportation. But I think that dispersal is the next step. Dispersal of concentrations to maintain some level of optimal density – otherwise I’m pessimistic. I think the place where this needs to play out is in places growing fastest. So we’re looking at India and China and Latin America and South-East Asia as where that will first occur. 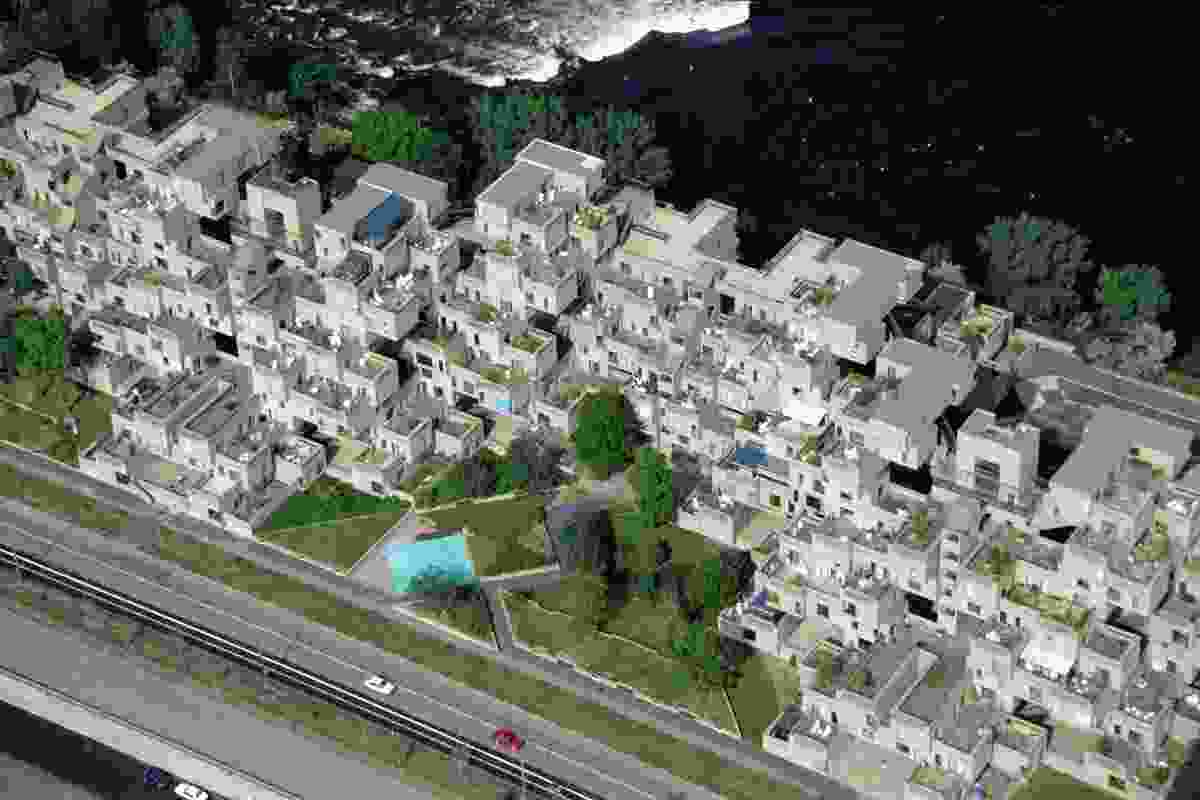 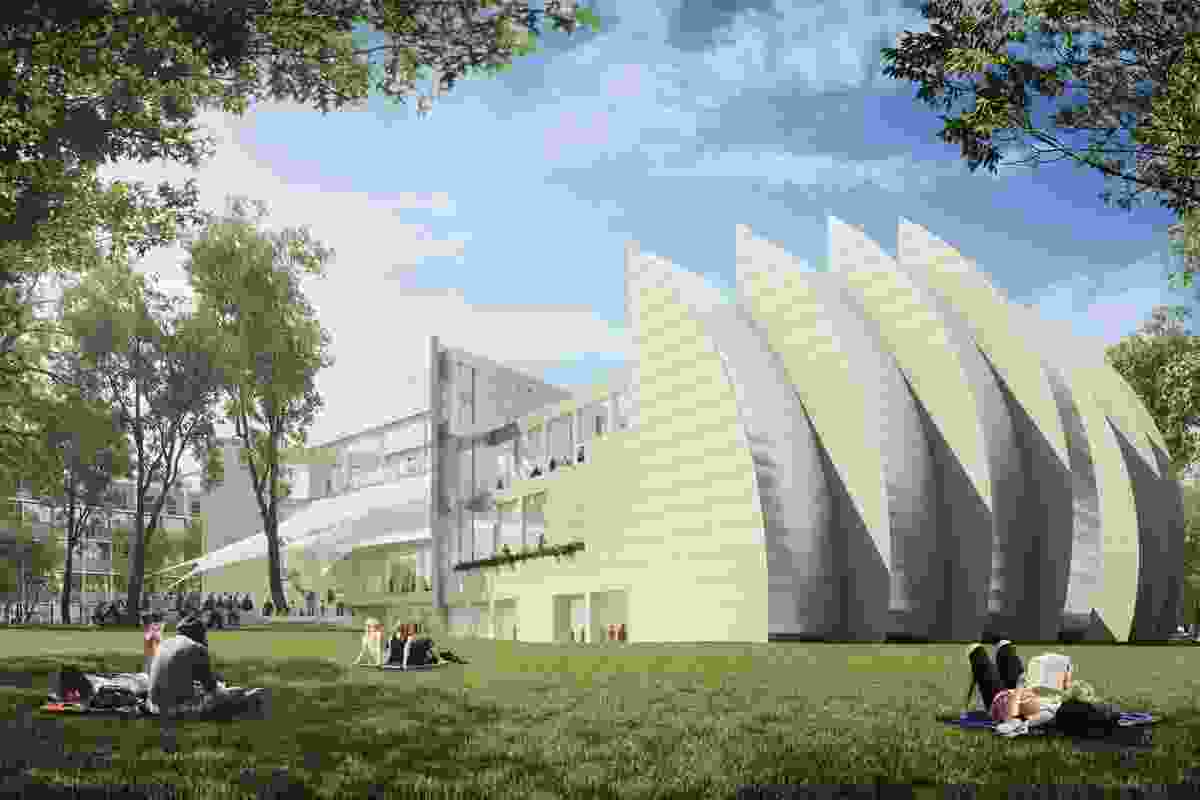 “Campus meets community”. The vision for the Sir Zelman Cowen School of Music by Safdie Architects. Unlike the Sydney Opera House, the exterior and interior of the shell-shaped concert hall “will speak the same geometry” said Safdie. It’s due for completion in 2016. 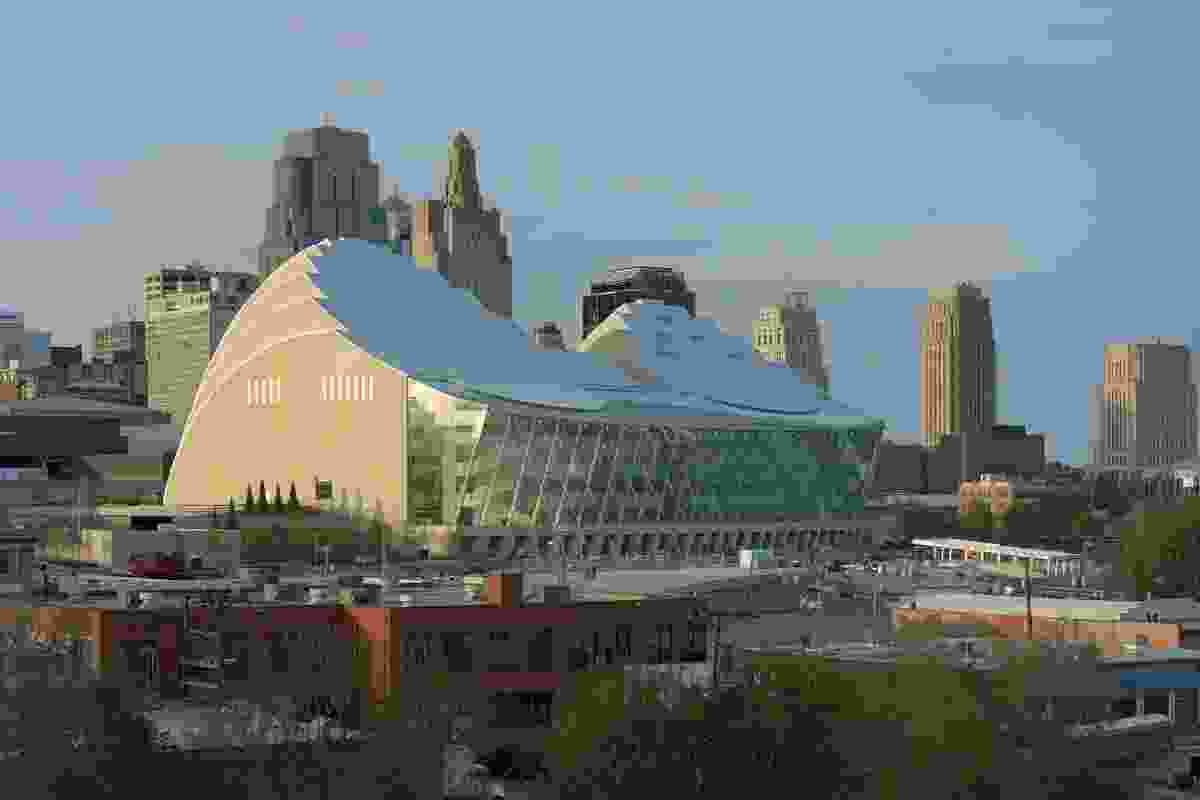 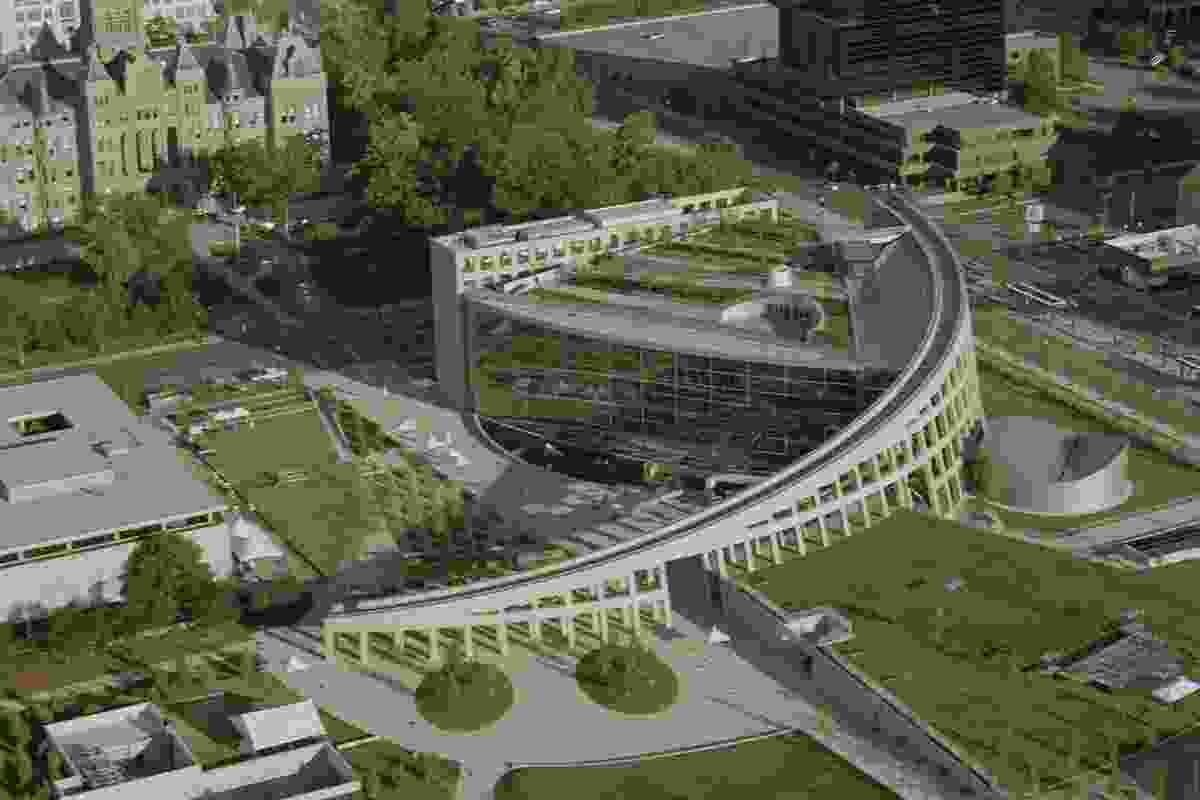 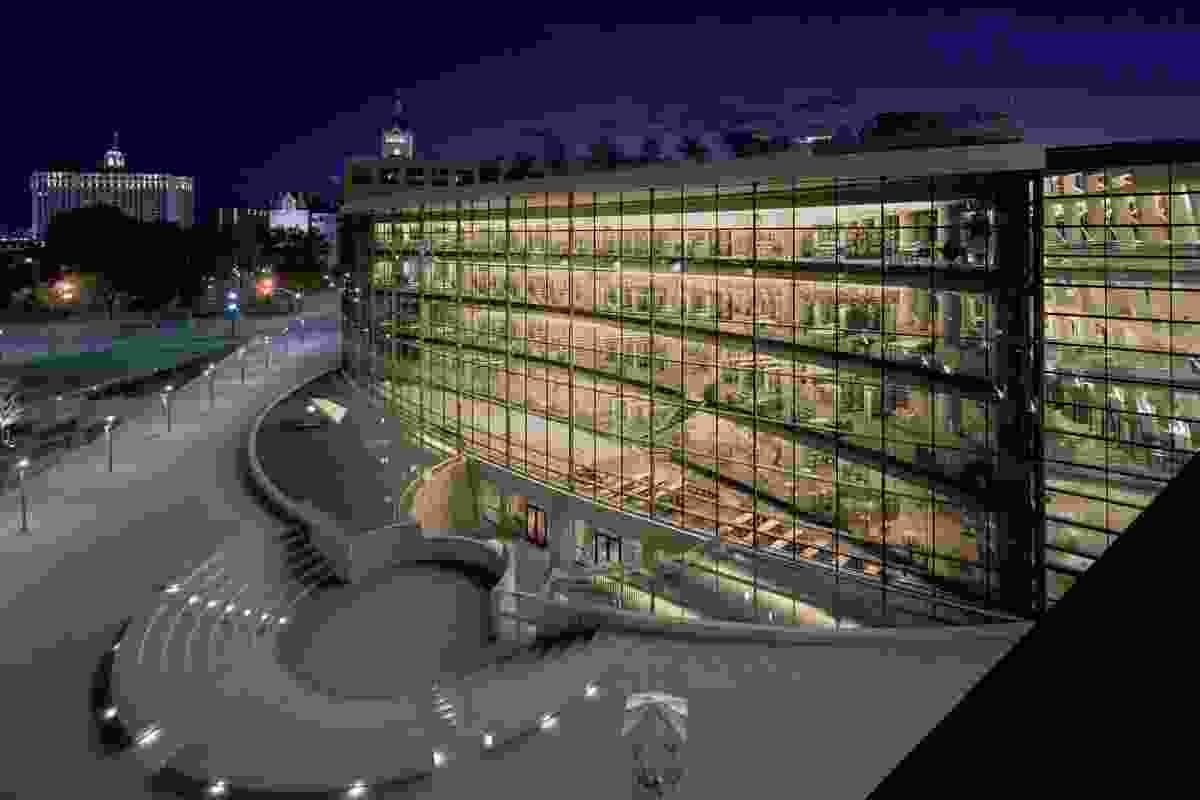 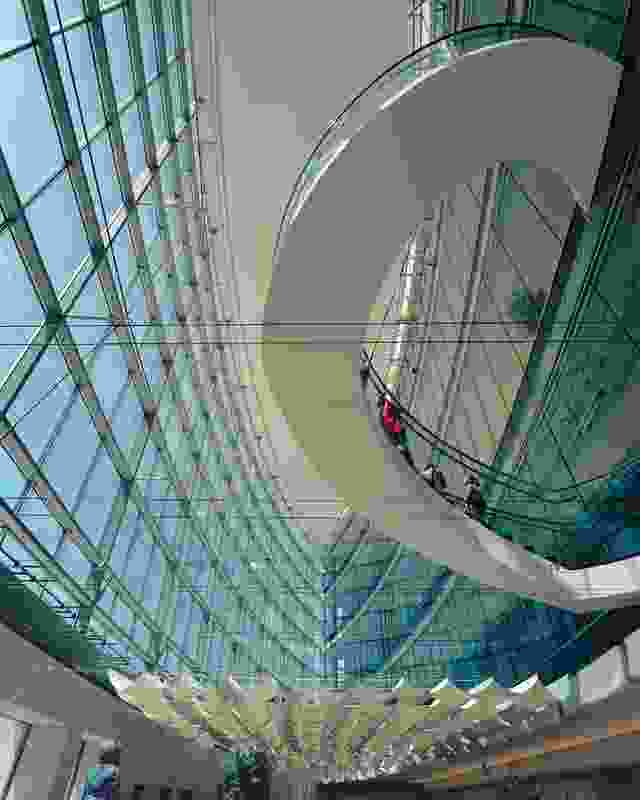 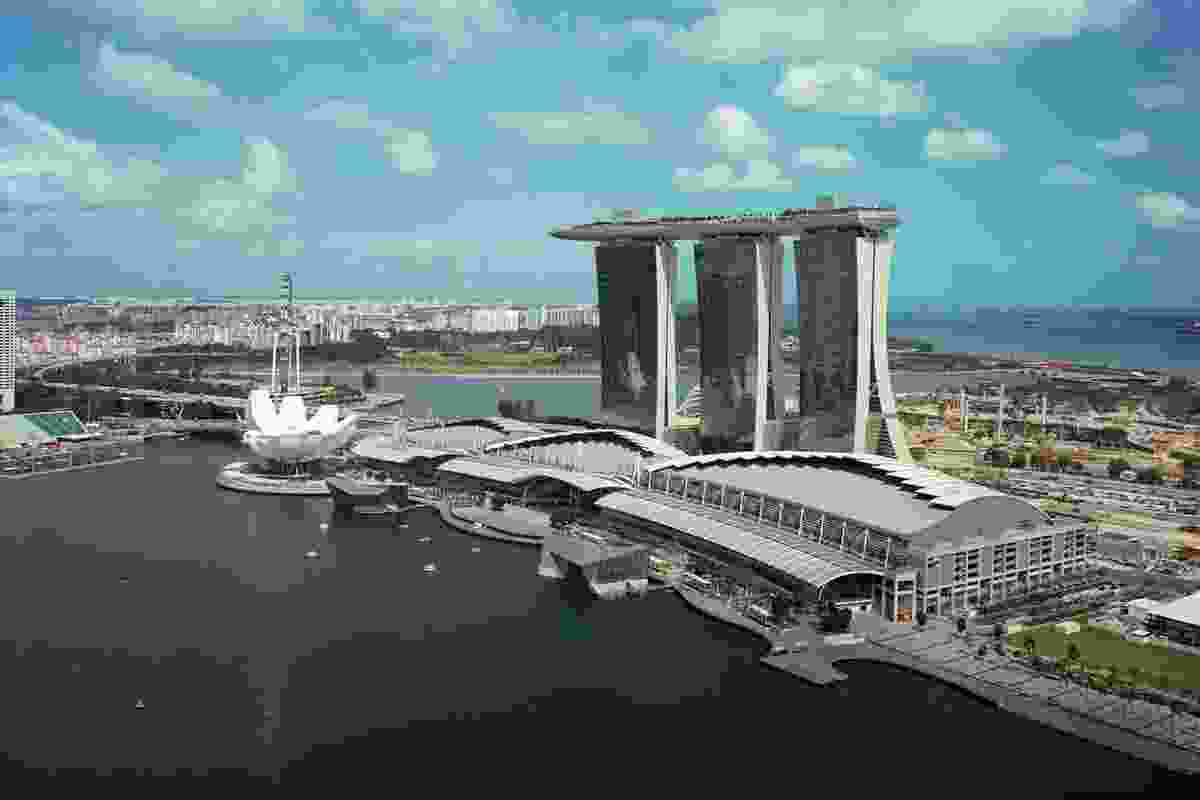 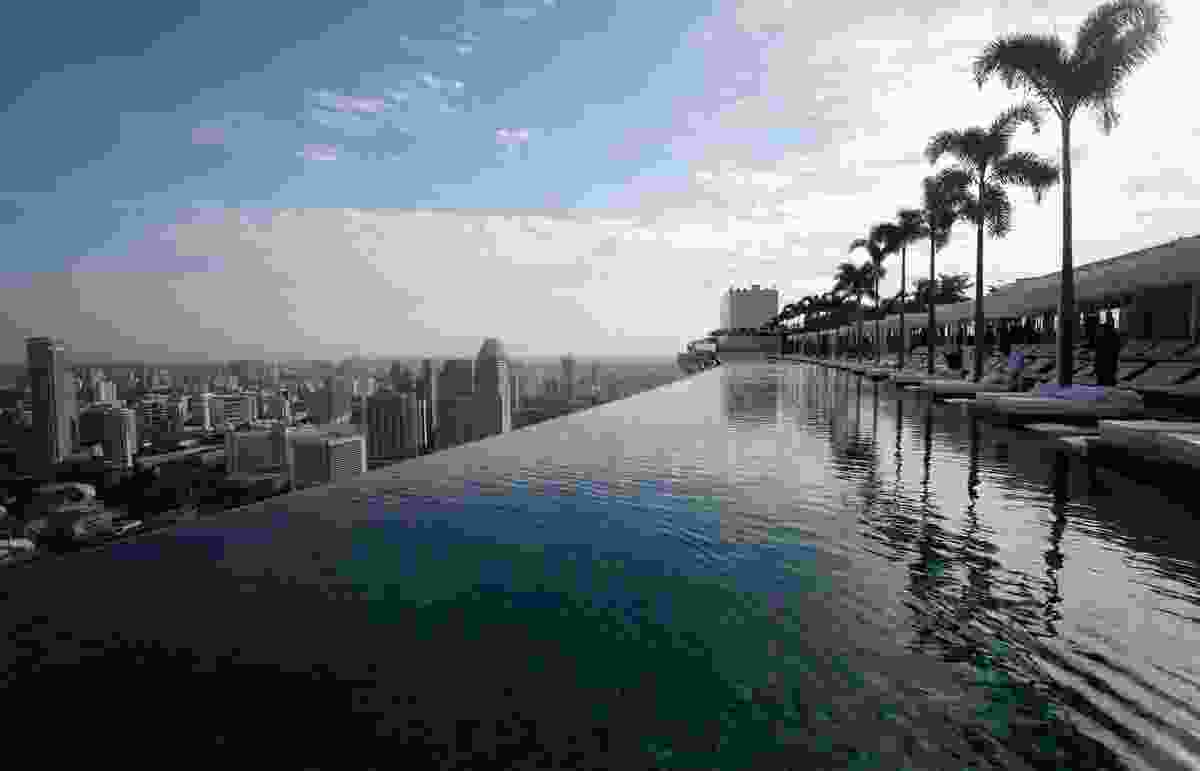 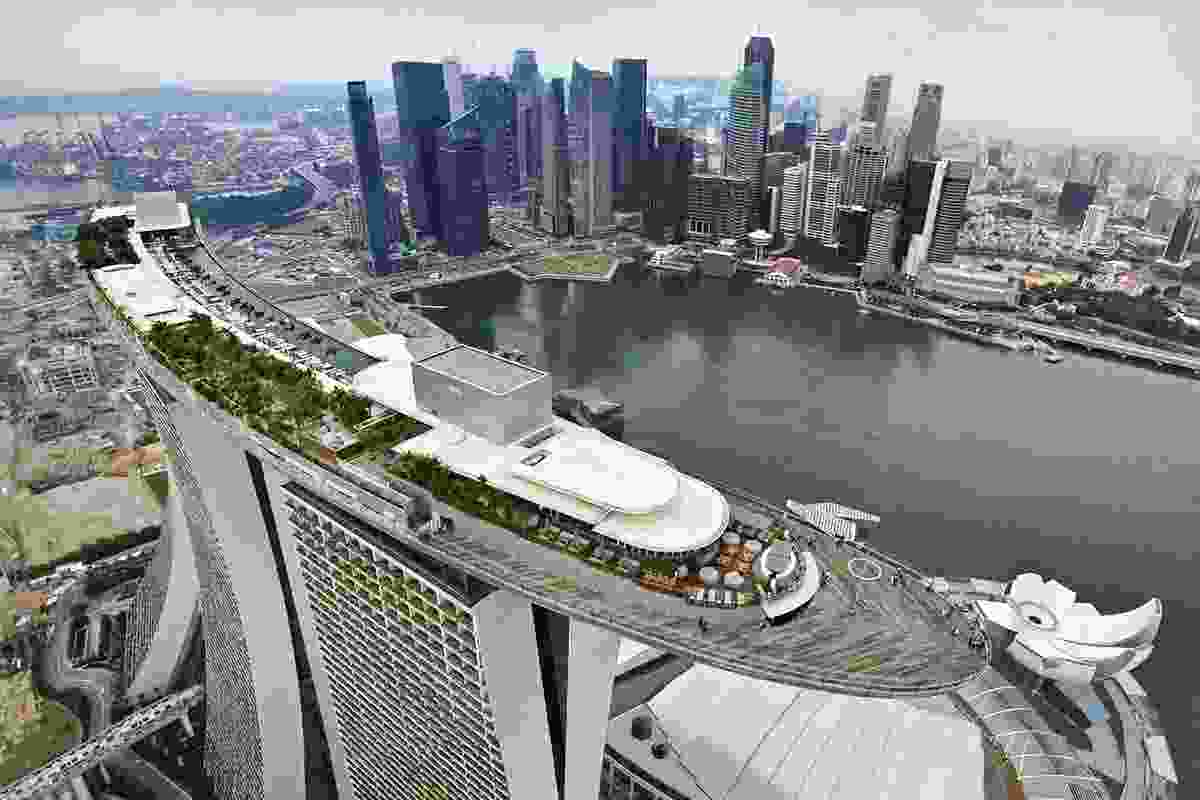 Aerial view of Skypark atop the Marina Sands Restort by Safdie Architects. 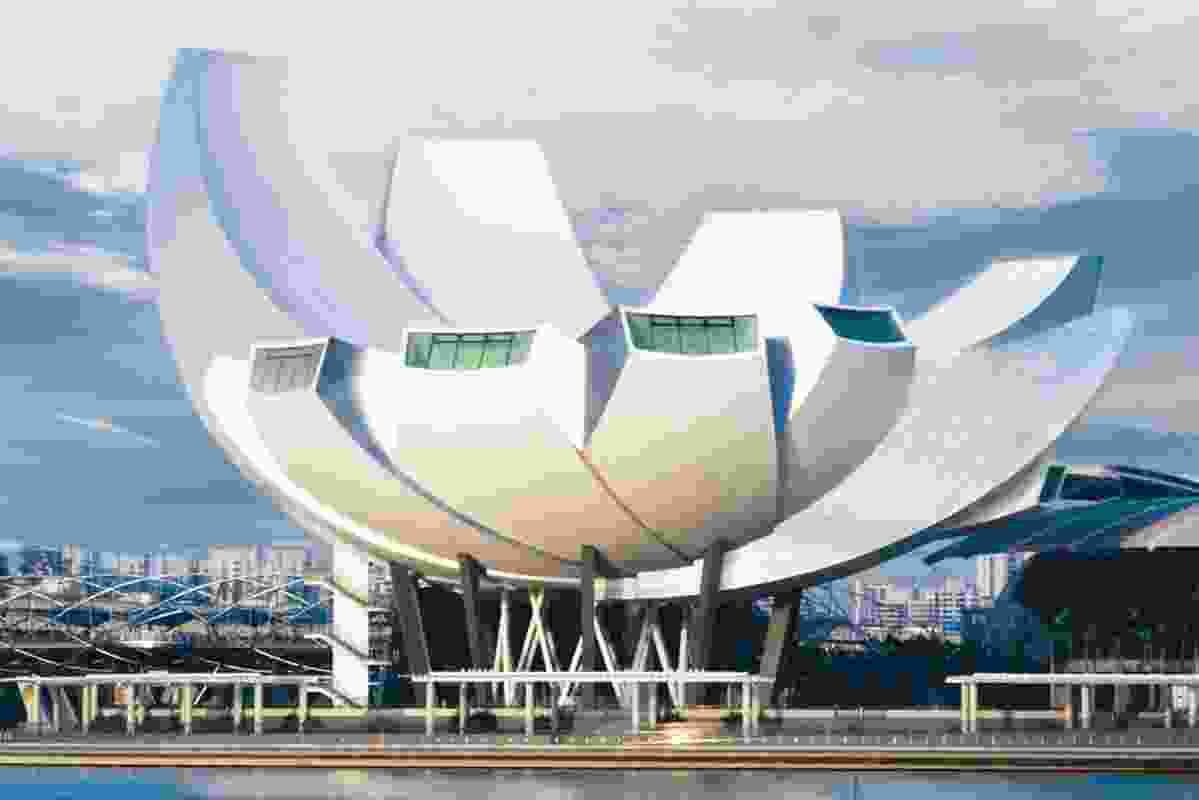 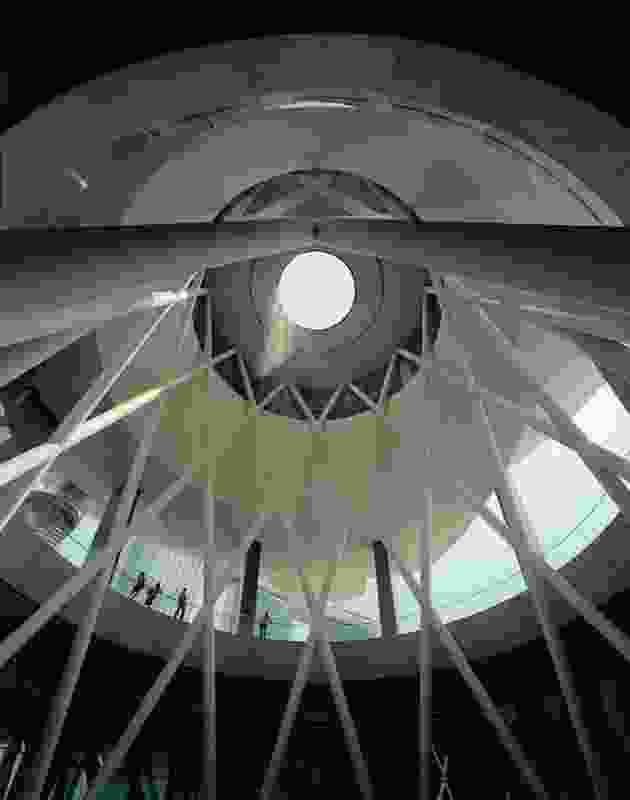 The oculus inside the ArtScience Museum. 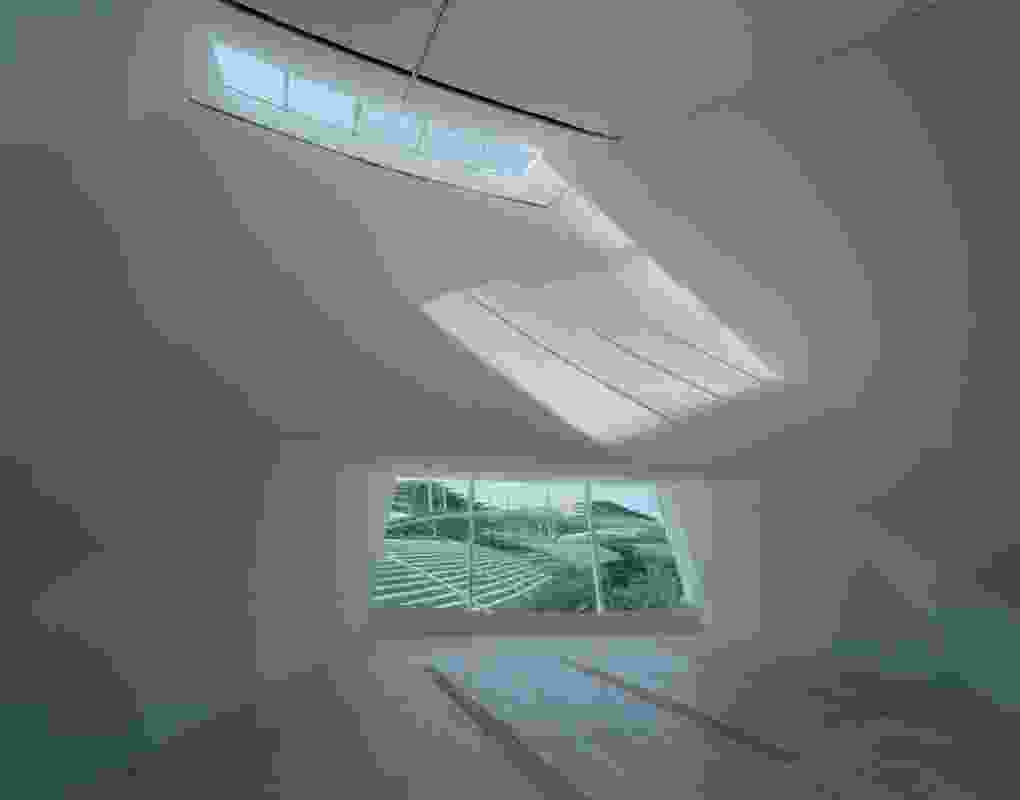 Looking out to the promenade from the ArtScience Museum. 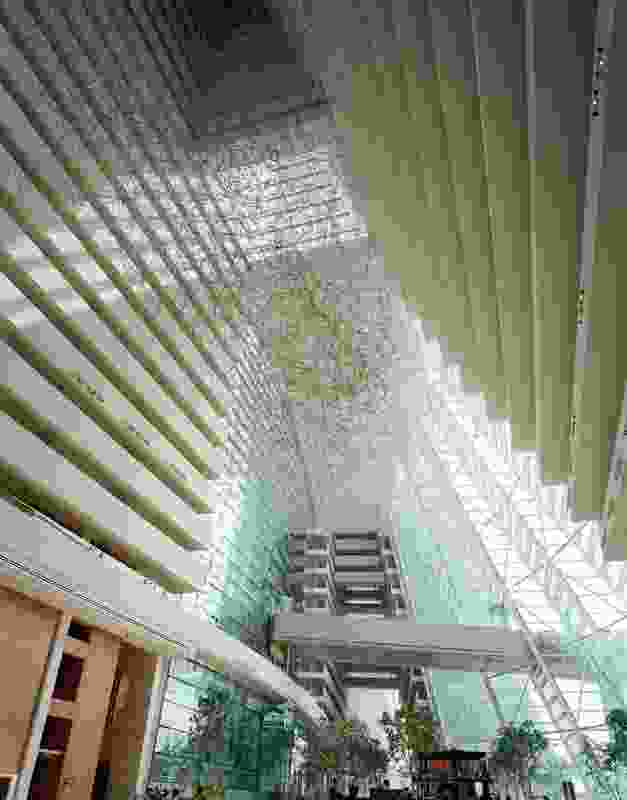 Under the atrium at Marina Bay Sands Hotel. 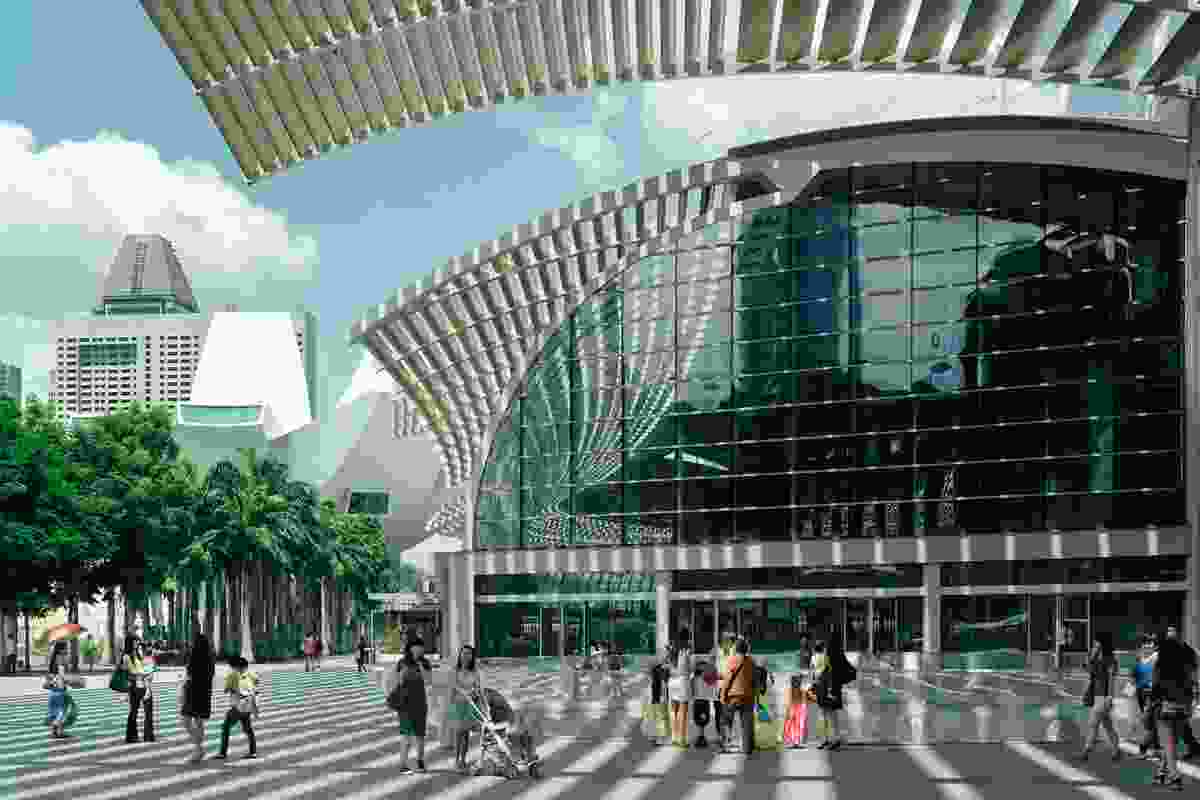 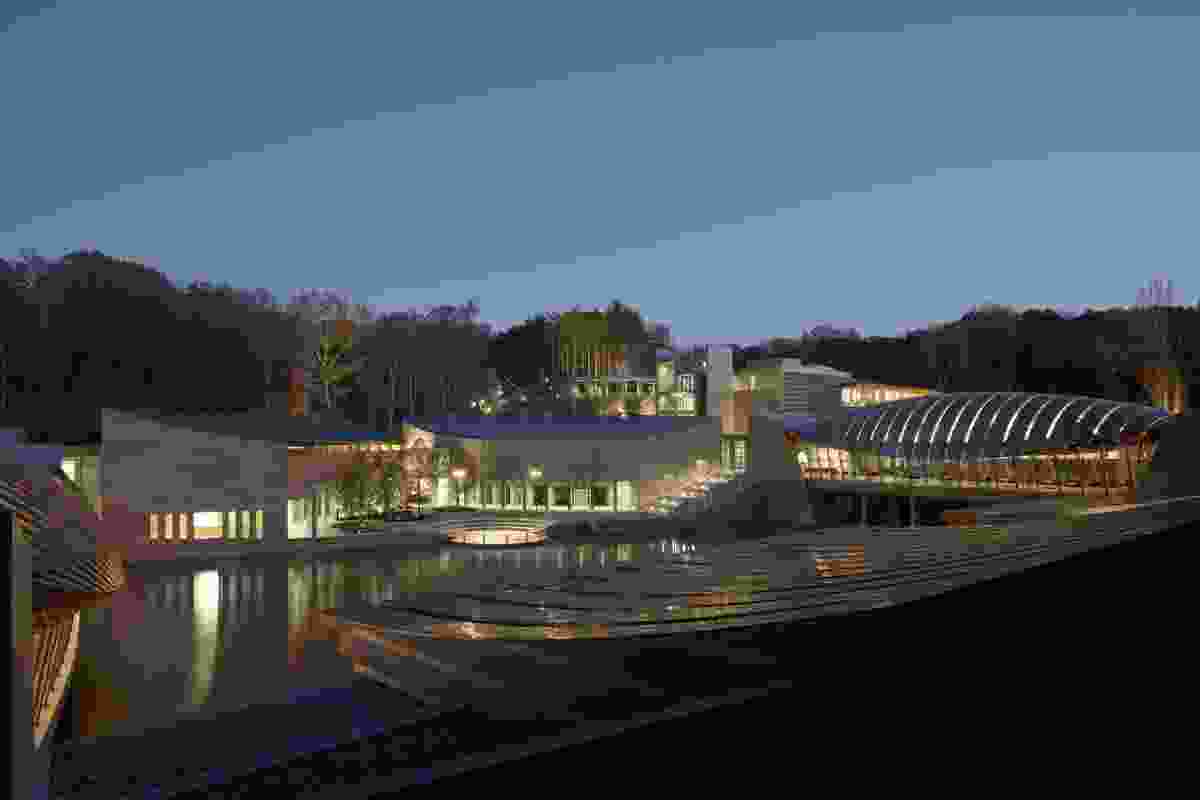 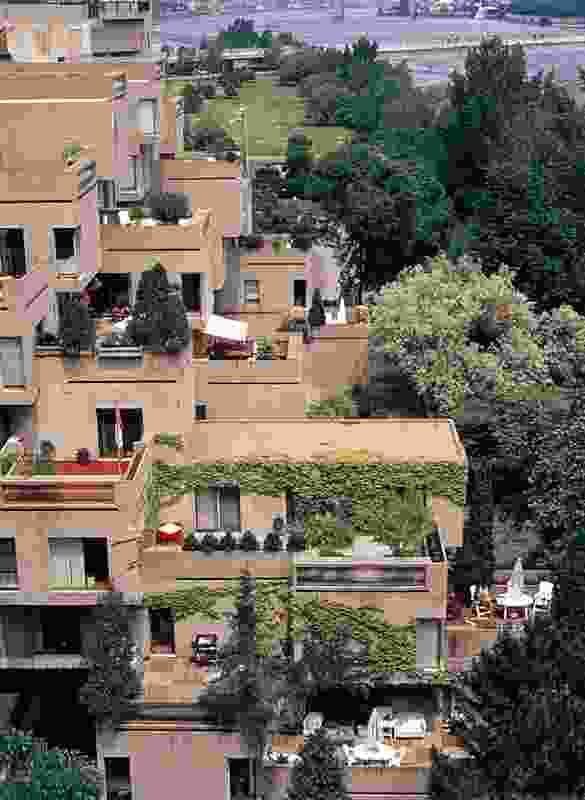 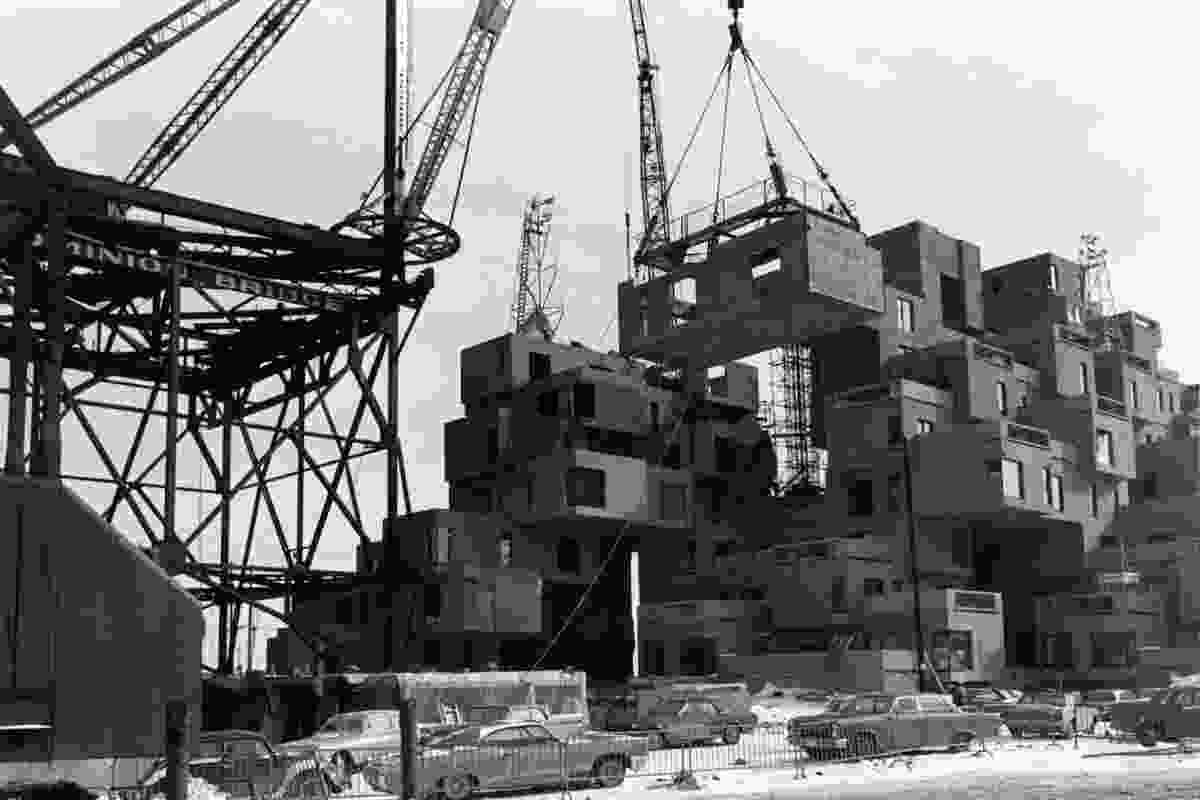 When constructed in 1967, Habitat’s porous vertical village was groundbreaking.