A playful dialogue between new and old at this renovation to a Sydney bungalow by Ian Moore Architects is apparent externally, but internally the transition is seamless.

The new living area includes a large kitchen in a crisp, white palette that continues throughout the house.

An old bungalow in Sydney’s Mosman turns a fresh face to the street, with recently restored white-painted cedar shingles, a red roof and pebble-dash-rendered chimneys. Subtly peeking out from behind it, a new box – rectangular and two storeys high – sits closely and comfortably, articulating a contemporary play on the “old.”

Materiality from the old bungalow is carried throughout this new extension. Pebble dash render on the western wall has been extended from the original dwelling onto the lower level of the addition, while the upper level is clad with cedar shingles to match the old. The colour of the existing stone pavers along the entry is mimicked in concrete, wrapping the retaining walls through to the backyard. Although they are presented in different ways, this reflection of the same materials makes it hard to say where the old stops and the new starts. This is the work of Ian Moore Architects.

The old bungalow was built about one hundred years ago and landed an unsympathetic extension in 1985. It was an imitation of the original house, yet poorly detailed, terribly planned and with no connection to the backyard. Consequently in 2009, the clients – graphic designers Jon Howe and Gillian Allan – approached Ian and asked for a big new living space and better bedroom spaces for their three children.

Ian’s approach was divided into three parts: refresh the old, demolish the existing extension, park a new box. “Externally, it is saying that [the old and new] are two quite distinct elements,” Ian says. “Internally, we don’t want to have a separation … we want a seamless connection between the two.”

On entering the house, this intention becomes evident. You are welcomed by a crisp white corridor branching off to a series of discrete spaces on either side: first, a music room to the right and a television room to the left. Complemented with refreshed original cornices along the way, the corridor then reveals the main bedroom, laundry and guest bathroom as you continue through the passage, which smoothly flows into the new box – the living room.

“This is what everything revolves around – daily life, food, family and friends,” says Jon. Showered with an abundance of light and ventilation, the living room houses a big kitchen (Jon is the cook in the family), a dining area and a living space. Framing a beautiful view of the garden, the neighbours’ trees and the sky, it opens out to the backyard, which houses the newly added carport and swimming pool. The strong relationship between the old and the new is accentuated by a window peeking and aligning back to the bungalow, creating the feeling that the bungalow’s verandah continues into the new box. Ian adds, “The two are just sitting side by side, butting against each other with no separation and no intention to highlight one or the other. When you’re in here, unless you really know that this is where the old house stops, you just flow from the old into the new.”

Proceeding up the stairs off the living room is like walking up a stairway to white heaven. A beautiful wash of sunlight is filtered down along the stairs through a skylight layered with sun-control louvres and light baffles – a detail particular to Ian’s style. At the top of the stairs you are offered a glimpse of the bungalow and the street.

The top level houses three children’s bedrooms, a music nook, separate bathrooms for the children and an attic guest bedroom. As the brief called for, all the children’s bedrooms are identical, “so there were no arguments,” explains Ian. All three have slightly different yet beautiful views of the garden and the greenery beyond, outlined with floor-to-ceiling aluminium window frames and glass louvres.

The crisp and white theme is continued as you head to another corridor where, once again, the seamless transition provides no clues that you are moving into the old roof space. Here, two children’s bathrooms articulate yet another contemporary play on the old. Tucked beneath one of the original dormer windows is a wall that Ian positioned on the ridge to split the space into the two bathrooms. He then applied a mirror finish to replicate the half form of the dormer window. As a result, each of the bathrooms feels like it is sitting within a complete form of the dormer, again creating a charming connection between the old and the new.

Jon and Gillian highlighted how peaceful the house feels as a result of the way Ian has manipulated light. “There is a lovely transition between day and night, in the old and the new. Throughout the day we occupy different spaces, and those spaces react to the time of day … it’s a fantastic place to live.” 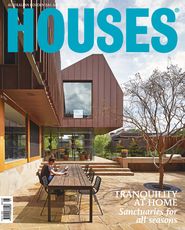 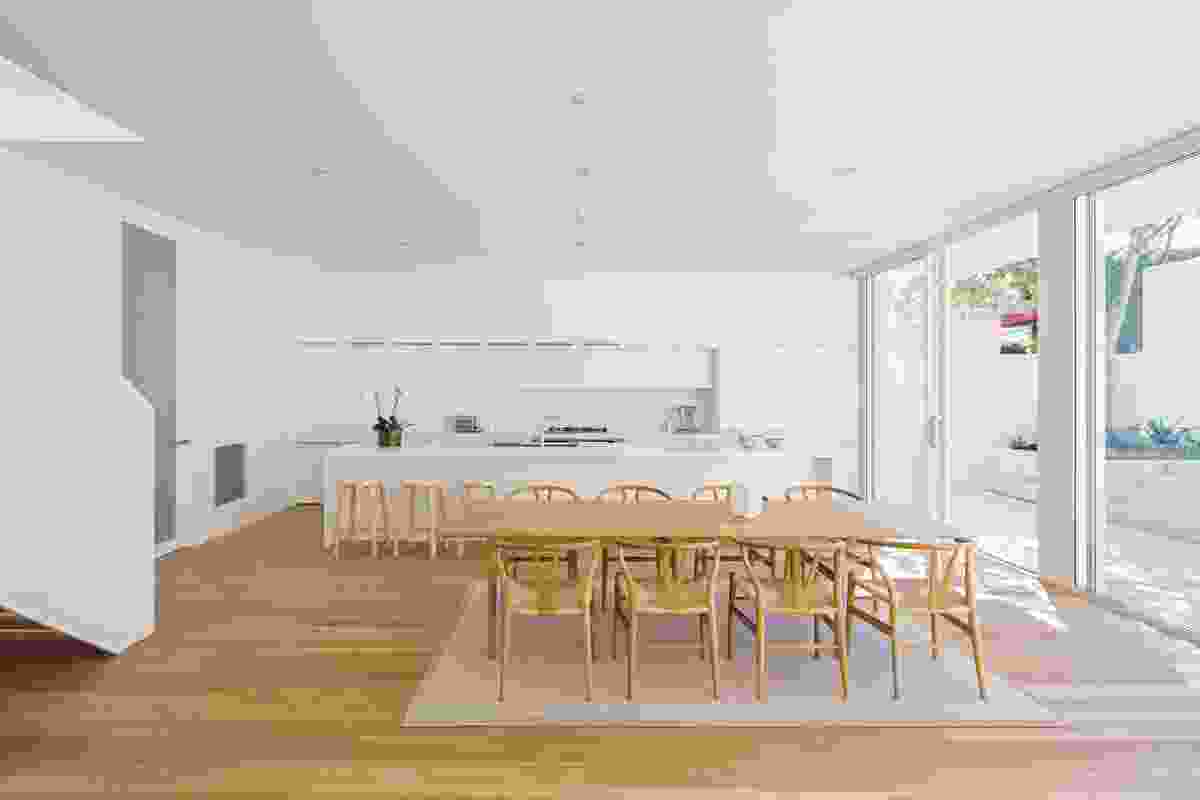 The new living area includes a large kitchen in a crisp, white palette that continues throughout the house. 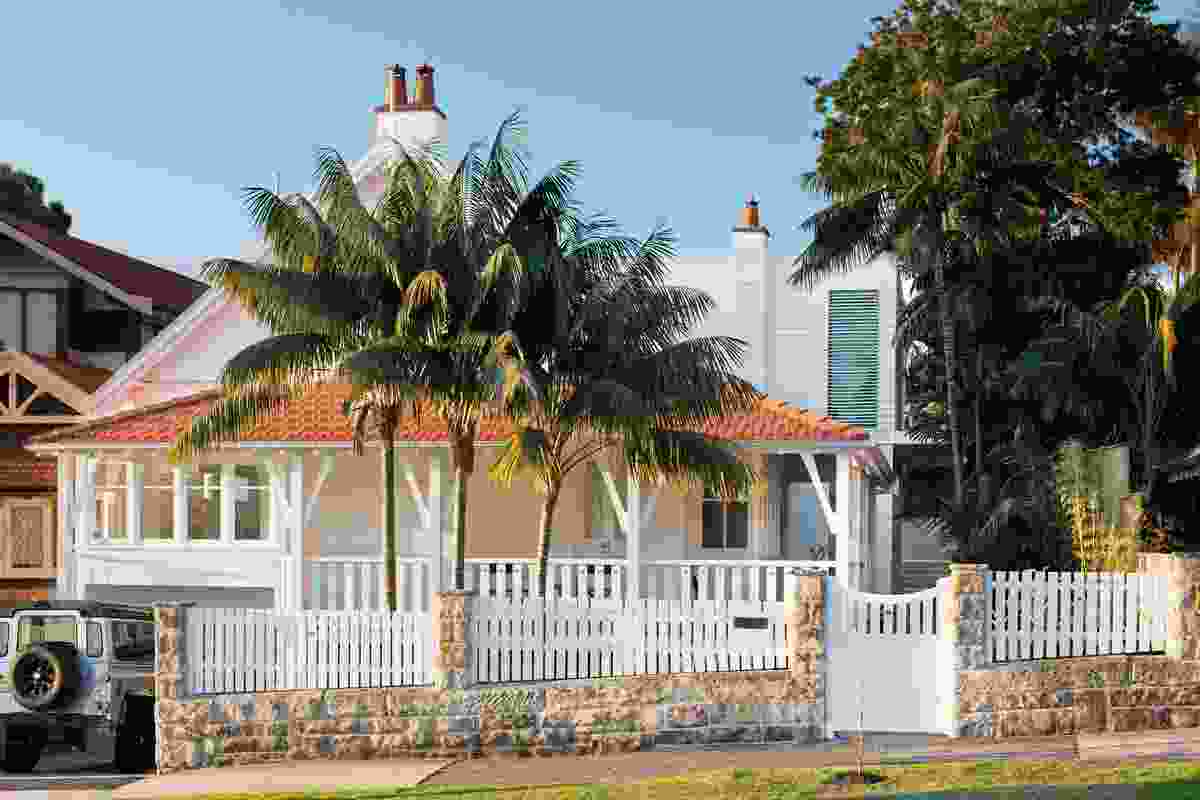 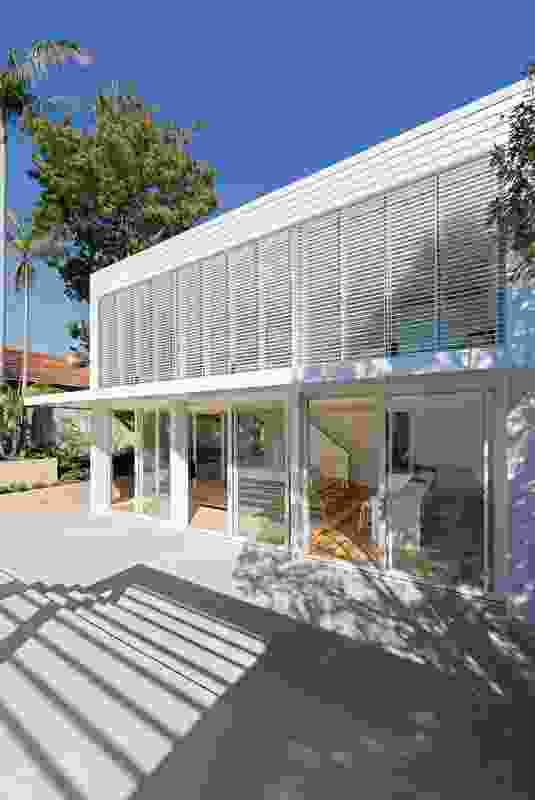 The upstairs bedrooms look over the garden, through floor-to-ceiling aluminium window frames and glass louvres. 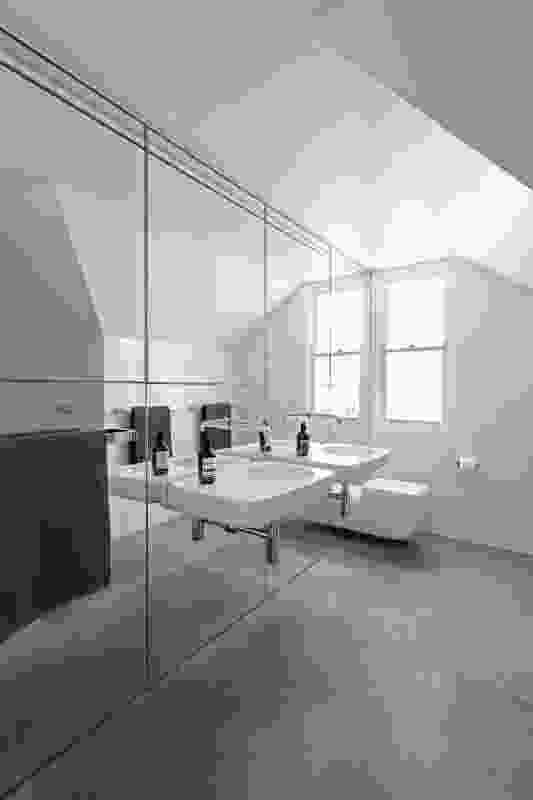 The upstairs bathroom was divided in two but a mirror finish gives the impression of a full set of dormer windows in each. 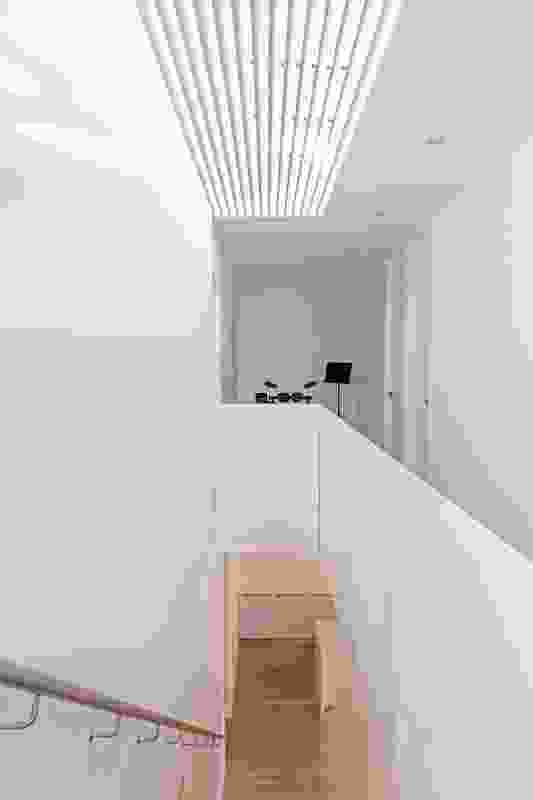 A beautiful wash of light filters down the stairs through a skylight layered with sun-control louvres and light baffles.

At the top of the stairs you are offered a view of the original bungalow and the street. 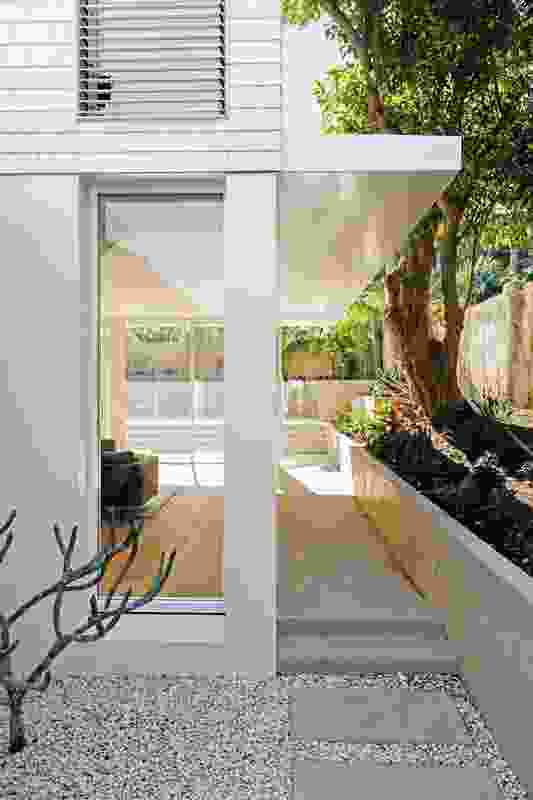 The careful manipulation of light has resulted in a “peaceful” house with spaces that respond to the time of day. 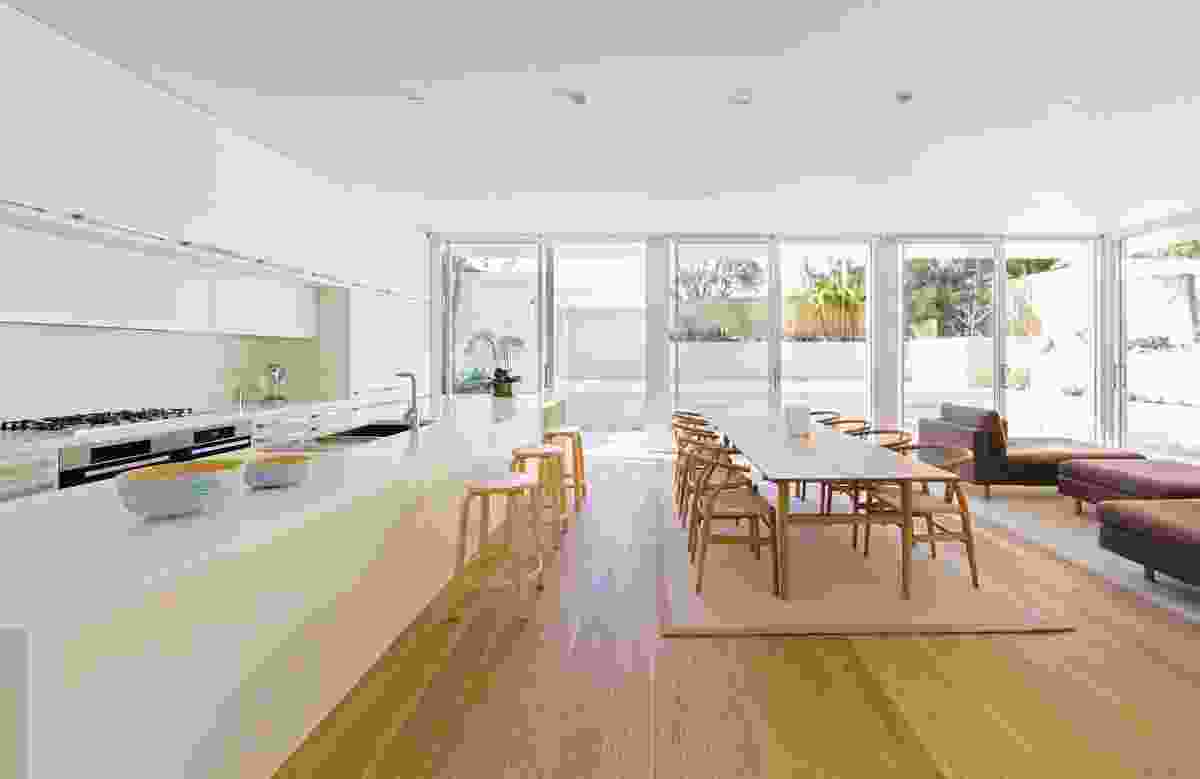 The new living area “box” frames views of the garden, sky and neighbouring trees and opens onto the backyard. 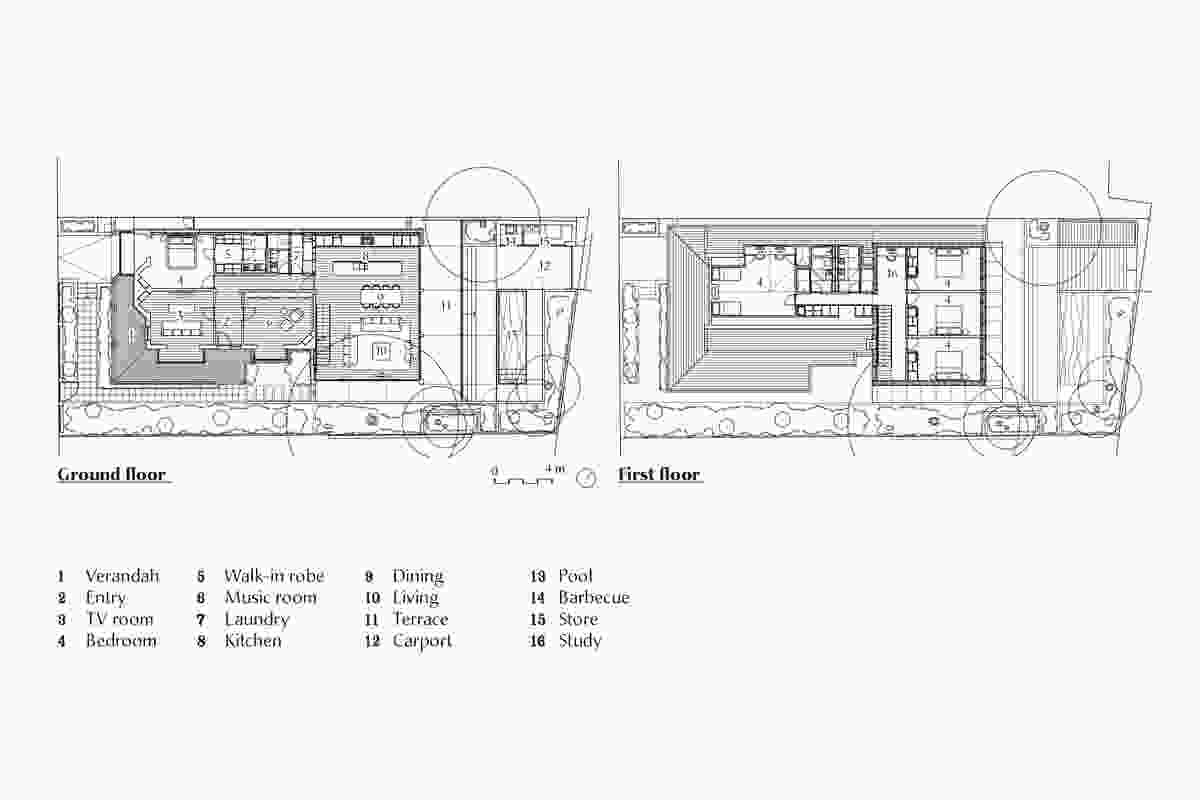