This restoration of a National Trust-registered 1835 Georgian residence is an exceptional model of sensitive architectural intervention.

A bluestone podium anchors the new conservatory to the heritage setting of Mount Pleasant.

On rare occasions the word “extension” is inadequate. The sensitive restoration of Mount Pleasant, a National Trust-registered 1835 Georgian residence in Sandy Bay, Hobart, is an architectural essay in timeless materials and functional liberation. A “progression,” in other words.

One of Hobart’s colonial treasures, Mount Pleasant is sited within an acre of land on a knoll that offers an unlimited panorama of the Derwent River to the north and a glorious over-the-shoulder view of Mount Wellington to the west. Despite the spread of suburbia, this grand retreat has remained relatively secluded. Several Centurion trees add to the seclusion, channelling sublime view lines.

Mount Pleasant’s conservatory is a contemporary structure, prominently positioned as you emerge from a tree-lined serpentine driveway. Its roof is flat and its segmented capping aligns with the verandah fascia of the Georgian house. Architect Daniel Lane of Preston Lane Architects says the decisions not to give the conservatory a pitched roof (thereby obviously tying it to the original house) and to fix the new building’s floor line below the level of the house’s verandah were attempts at observing a respectful design hierarchy.

The conservatory is joined to a remodelled kitchen in the original house by a glazed minimalist link, which also serves as an entrance lobby to the extended residence. A new garage, positioned to the site’s rear at the far side of a vehicle access bay, dictates the necessity of a “back” entrance. Mount Pleasant’s formal entrance – up grand steps in the centre of its symmetrical front facade – is a century and a half away, off a circular carriage road that sweeps under a magnificent Norfolk Island pine.

The conservatory functions as a living/dining space. It also operates as the informal social hub for casual visitors. Materials are beautiful and minimal. The floor is of honed bluestone tiles. Walls of almost full-height double glazing fling enclosed space outwards. To the north, over the bluestone podium, the hypnotic Derwent is contained by distant tree-covered hills. To the west, through a bouffant of winter oak branches, is the mountain.

A comfortable sequence of steps leads from the conservatory across the foyer and into the kitchen. The new building’s southern wall is faced inside and out in saw-cut sandstone blocks and the client travelled to a quarry on the NSW Central Coast to select the stone. For the interior he chose a mix of plain light cream blocks and similar ones banded with red striations. Striated blocks have been positioned deliberately so that their calligraphy sweeps diagonally upwards from left to right, subtly drawing the observer’s gaze towards a pristine view of Mount Wellington.

Externally, the conservatory pays creative dues to Mount Pleasant. Referencing is evident though not subservient. The slender split uprights forming an obvious visual link to the house’s double verandah posts are painted steel, as is the segmented capping that the steel posts support and the floor facing that supports them. Capping and seating details reinterpret the house’s verandah fascia and base plate design. Colour further unites old and new: light cream, Naples yellow and charcoal grey.

Asymmetrical overhangs to the north and west effectively shield the conservatory’s glazed areas from the main impact of summer sun. In winter the bluestone floor acts as a heat store, augmented by an automated and zoned under-tile heating system.

Mount Pleasant has been reborn in an exemplary, understated and understood architectural intervention. Fifteen heritage conditions were imposed by the Tasmanian Heritage Council and all have been met. Every aspect of the brief has been rigorously interrogated and solved with distinction, the consequence of a productive collaboration between architect and client. The new garage, with its steeply raked roof, is tied to the Stables Cottage (with its roof of a similar pitch) by a sequence of bluestone walls. The Stables Cottage is linked to the house by a new glazed walkway, a functional element that hardly intrudes, though in fact it cuts a delightful walled courtyard in half. The remodelled kitchen and a reappointed bathroom, both expertly detailed and equipped with the most sought-after appliances, have been designed without fuss to ease an historic house into the twenty-first century with the utmost respect.

This house received a high commendation in the House Alteration and Additions over 200 square metres category of the 2011 Houses Awards. 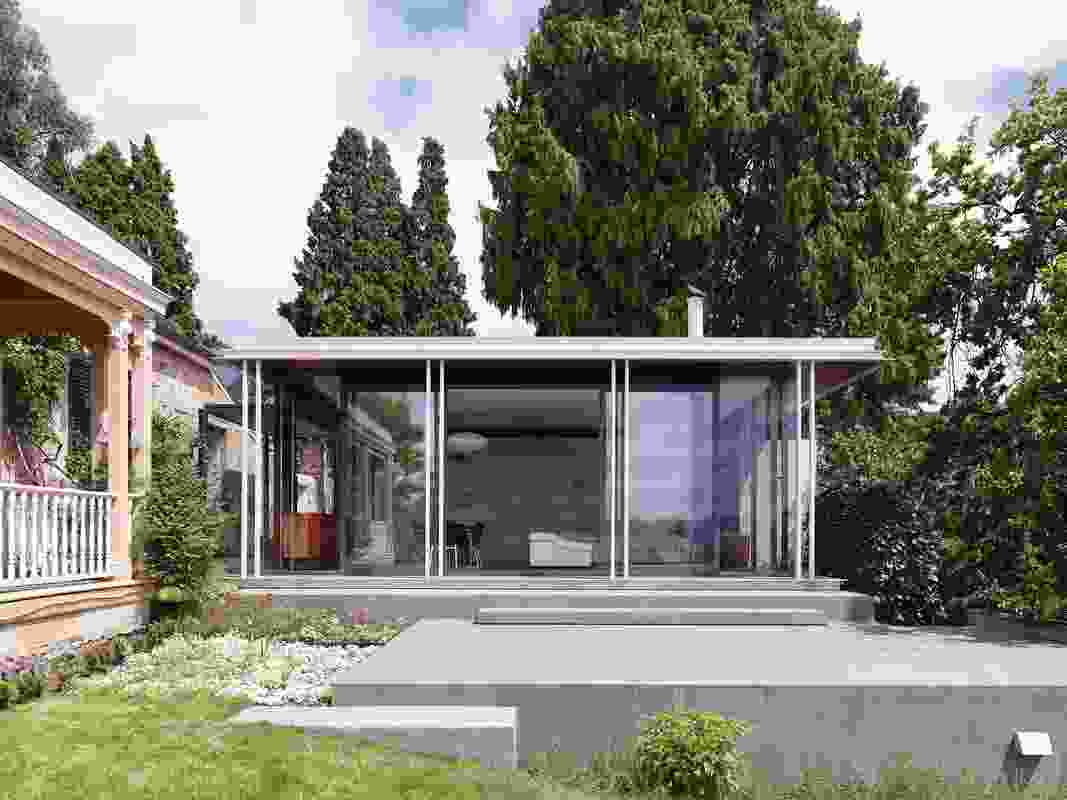 A bluestone podium anchors the new conservatory to the heritage setting of Mount Pleasant. 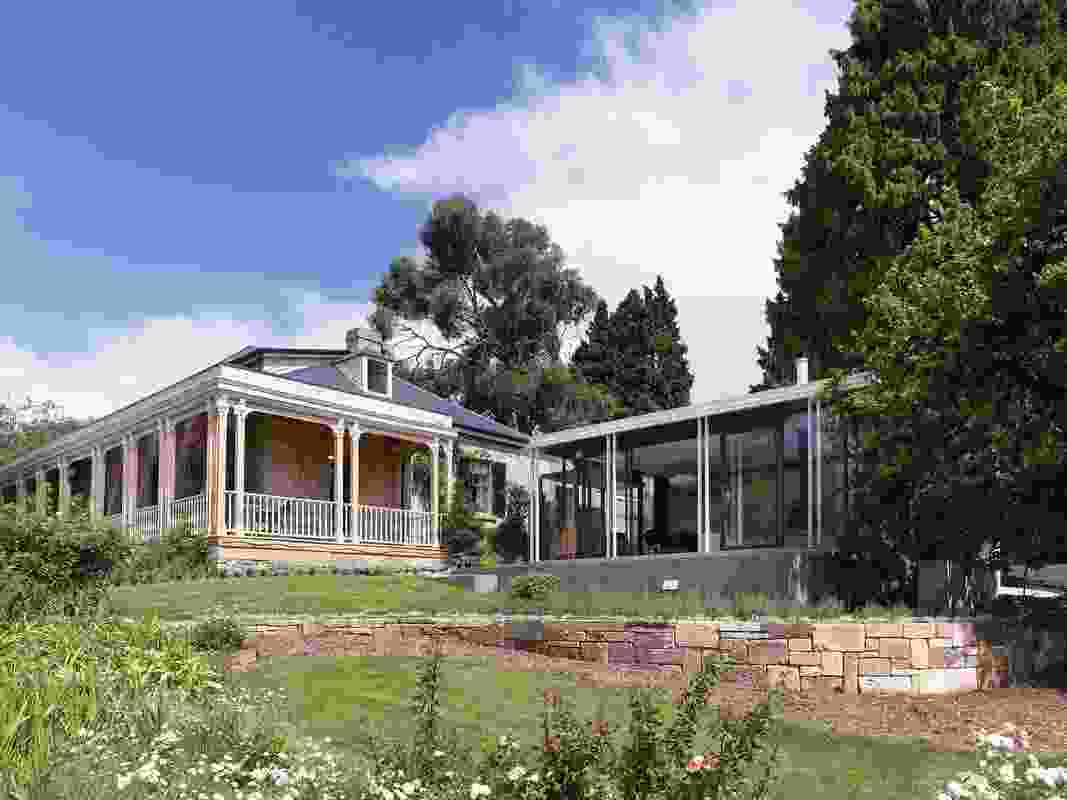 Respectful but not subservient, the new structure gently references the residence. 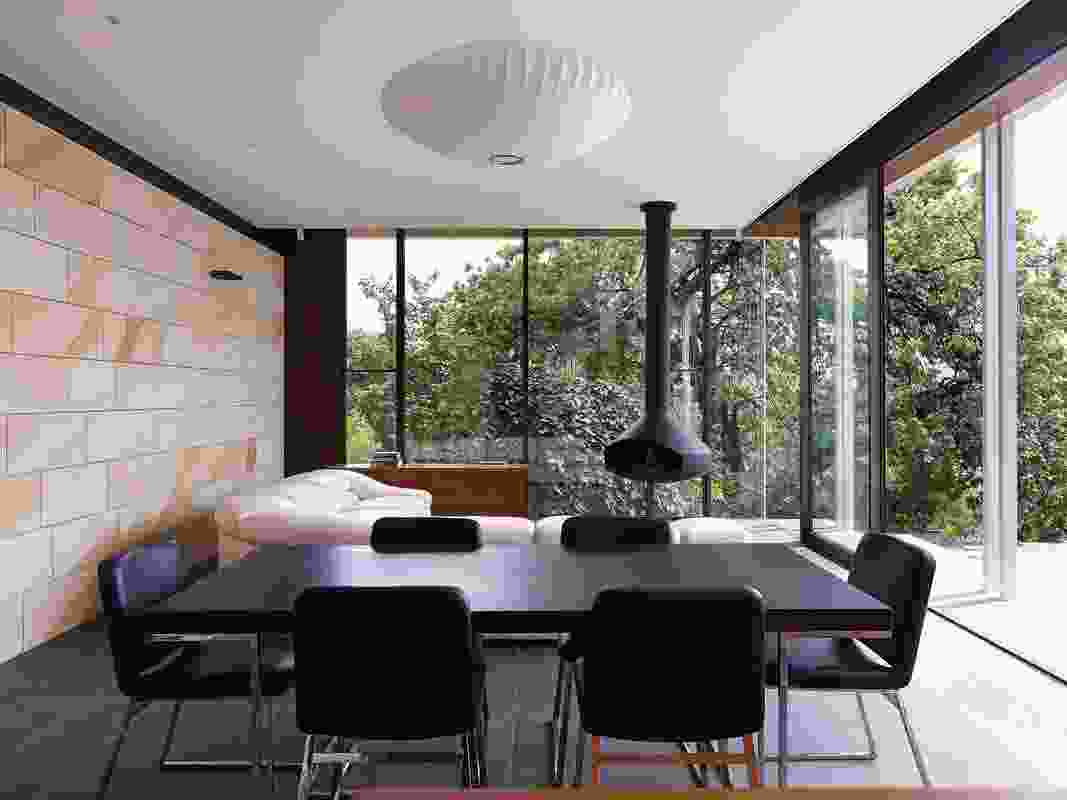 The conservatory’s saw-cut sandstone blocks were individually chosen by the client. 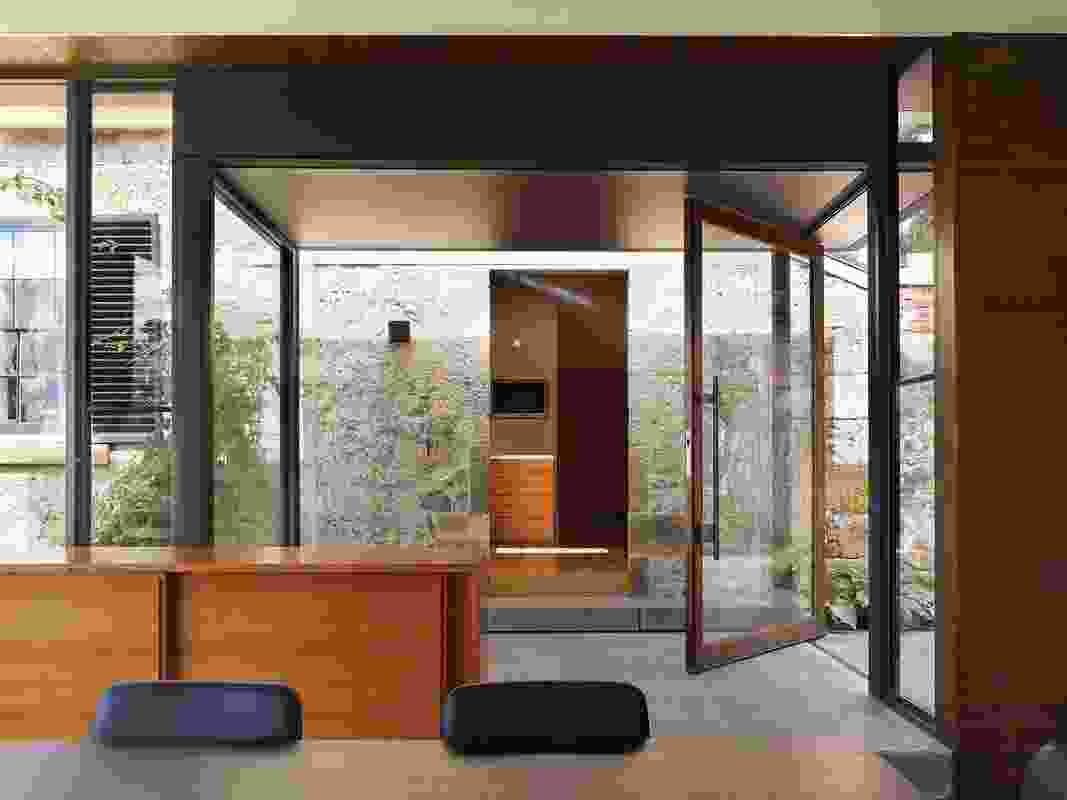 The glazed link between the conservatory and the kitchen also acts as an entrance lobby. 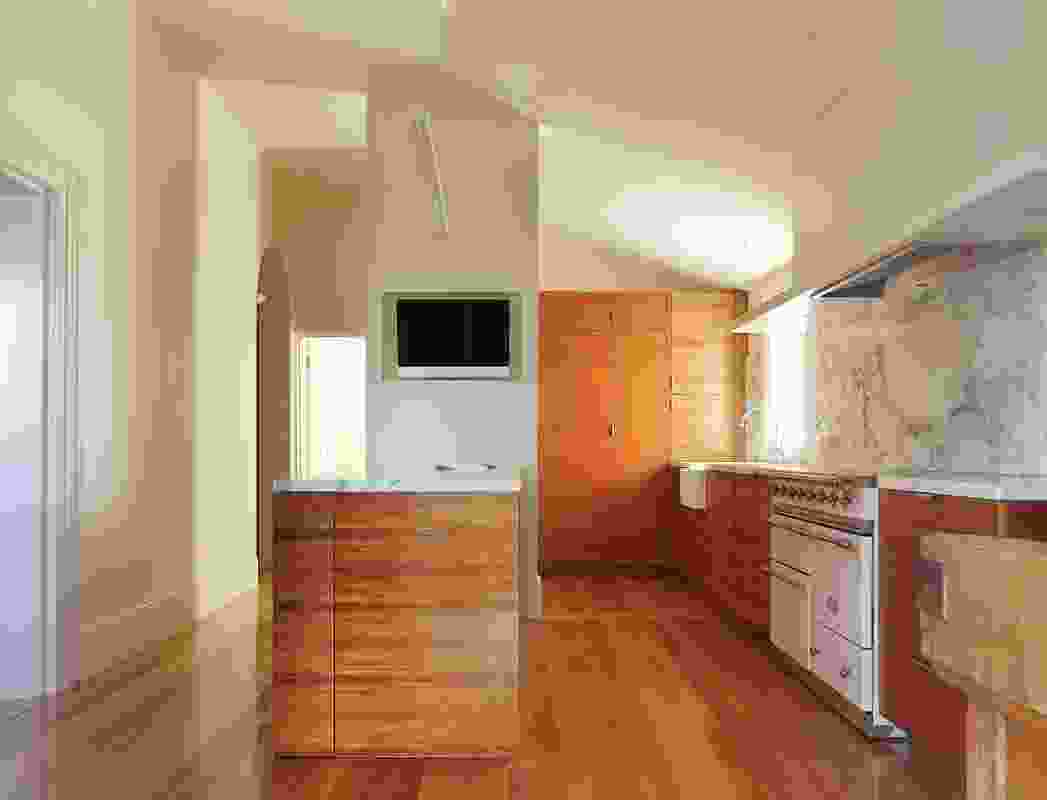 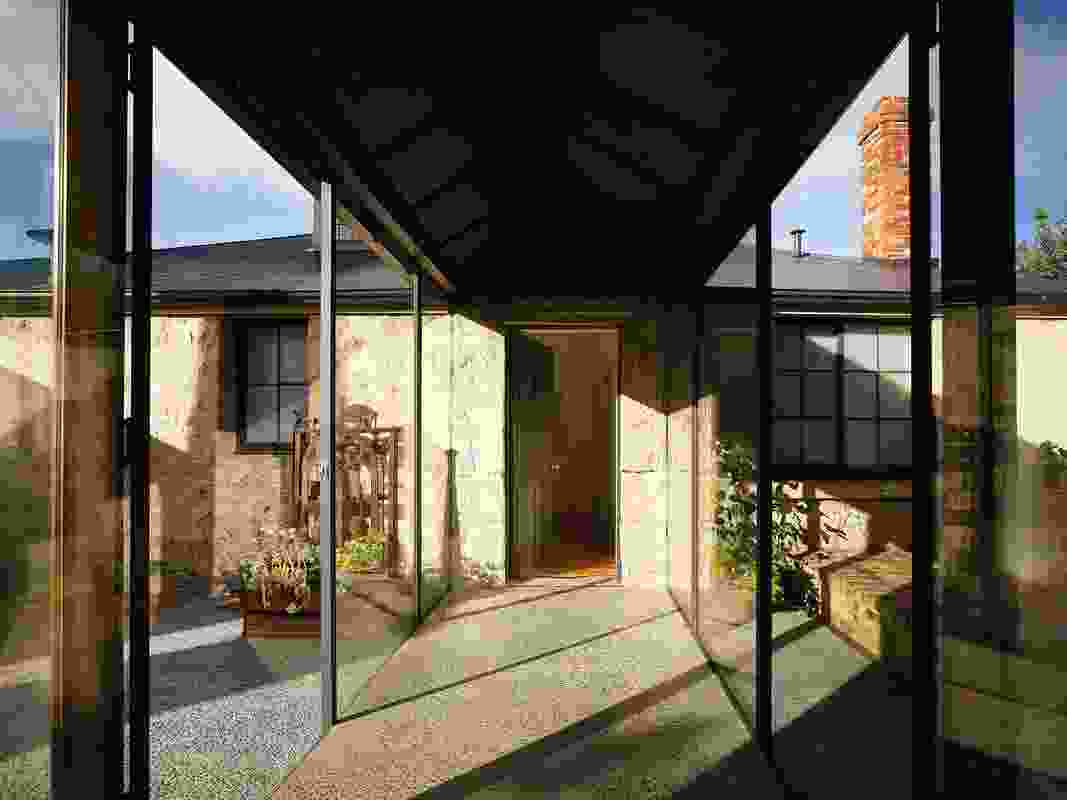 A glazed walkway cuts across a walled courtyard to link Stables Cottage to the main house.