Melbourne’s much-anticipated MPavilion officially opens to the public on 7 October 2014. Designed by Sean Godsell, the pavilion is the venue for a four-month festival of architecture, design and creative arts until 1 February 2015, funded in-part by the recently-formed Naomi Milgrom Foundation.

“My three key inspirations were firstly the globally-recognised Serpentine Pavilion, secondly our wonderful city of Melbourne and thirdly, a commitment to contemporary architecture and design,” said Naomi Milgrom at the opening.

The pavilion was officially opened by Julia Peyton-Jones OBE, co-director of Serpentine Gallery in London. “It’s exciting that our annual pavilion now has a twin in Australia,” she said. “I hope this will be the beginning of an ongoing relationship to exhibiting architecture through built space rather than in an exhibition.”

The pavilion sits in Melbourne’s Queen Victoria Gardens, a simple steel structure, clad in perforated aluminium that reflects light. Conceived as a blooming piece of architecture, panels that form the walls and roof of the pavilion open up to the breaking daylight in the morning, before closing down at night to form a simple box. The moving panels provide shade and shelter and filter light from the sun.

“It’s precedent can be seen on the distant hills and far horizons in the Australian outback,” said Sean Godsell of the pavilion’s design. The structure is intended to be reminiscent of the Aboriginal humpy, both in form and function as a place to gather, converse and connect.

“[Sean’s] signature is strong but the MPavilion sits softly like a jewel box nestled in the landscape of the Queen Victoria Gardens,” commented Milgrom. “We hope the MPavilion will become a cultural conductor, an experiment across disciplines, institutions, partners and the public.”

At the heart of this pavilion and its program of activities is a strong emphasis on architecture and design. In opening the pavilion, Lord Mayor Robert Doyle paid tribute to the contributions architects have made to the city. “The architects, landscape architects and urban designers have transformed our city not just in physical ways but in ways which have brought people and activity back to the heart of the city,” he said. “The thing I love about the MPavilion is not just its wonderful design but the fact that it will be filled with activity and people over its time here.”

Over four months, MPavilion will play host to over a hundred free events with 135 collaborators spanning creative disciplines from architecture to fashion design. The activities range from daily lunchtime readings of Robin Boyd’s bestselling The Australian Ugliness, to music performance featuring local and international artists and a series of impromptu activities curated by The Office for Good Design.

Godsell commented on his commission as a great gift, pointing to the legacies of architectural patronage, without which “we wouldn’t have buildings by Michaelangelo or Brunelleschi… we wouldn’t have the Fallingwaters or the Guggenheims by Wright and Gehry, and the Myer family’s contribution to the city – the Music Bowl,” he said. “Now we have a new patron of architecture.” The pavilion will be donated to the City of Melbourne after its four months in the Queen Victoria Gardens, when it will be moved to a more permanent location. It will be replaced by the next iteration of the annual pavilion next year.

See the full program of events planned for this year’s MPavilion here. 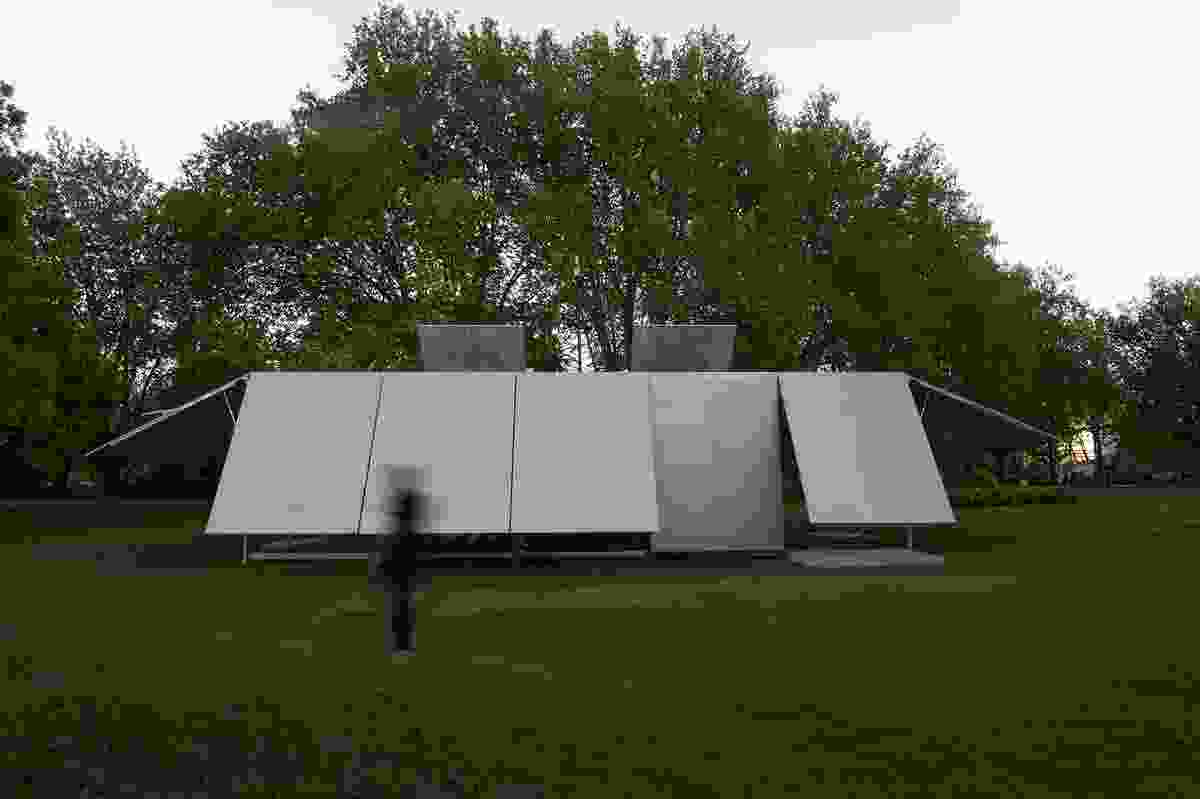 The MPavilion is conceived as a blooming flower, its ‘petals’ opening up at daybreak. 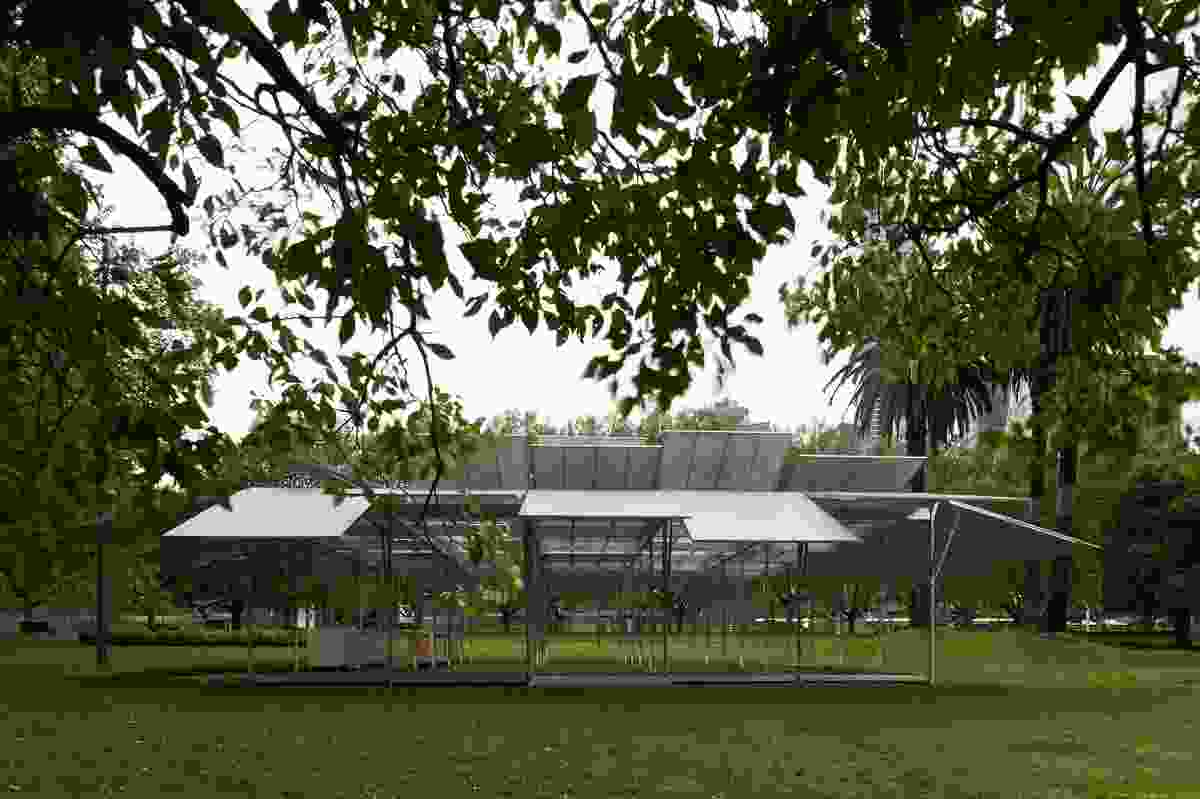 The simple sheltered structure has its precedence in Australian outback vernacular.

The pavilion is the central meeting place as well as the heart and hub of a four-month program of activities. 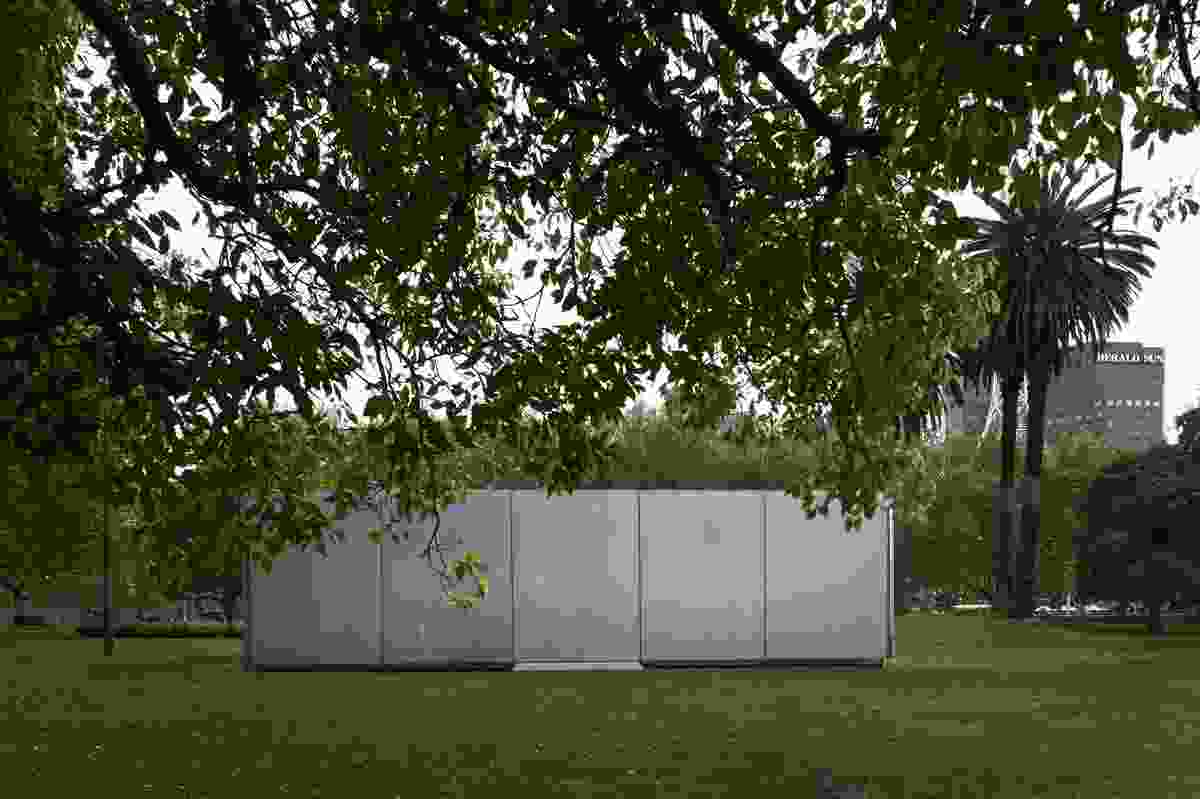 When closed, the MPavilion is like a jewellery box in the field. 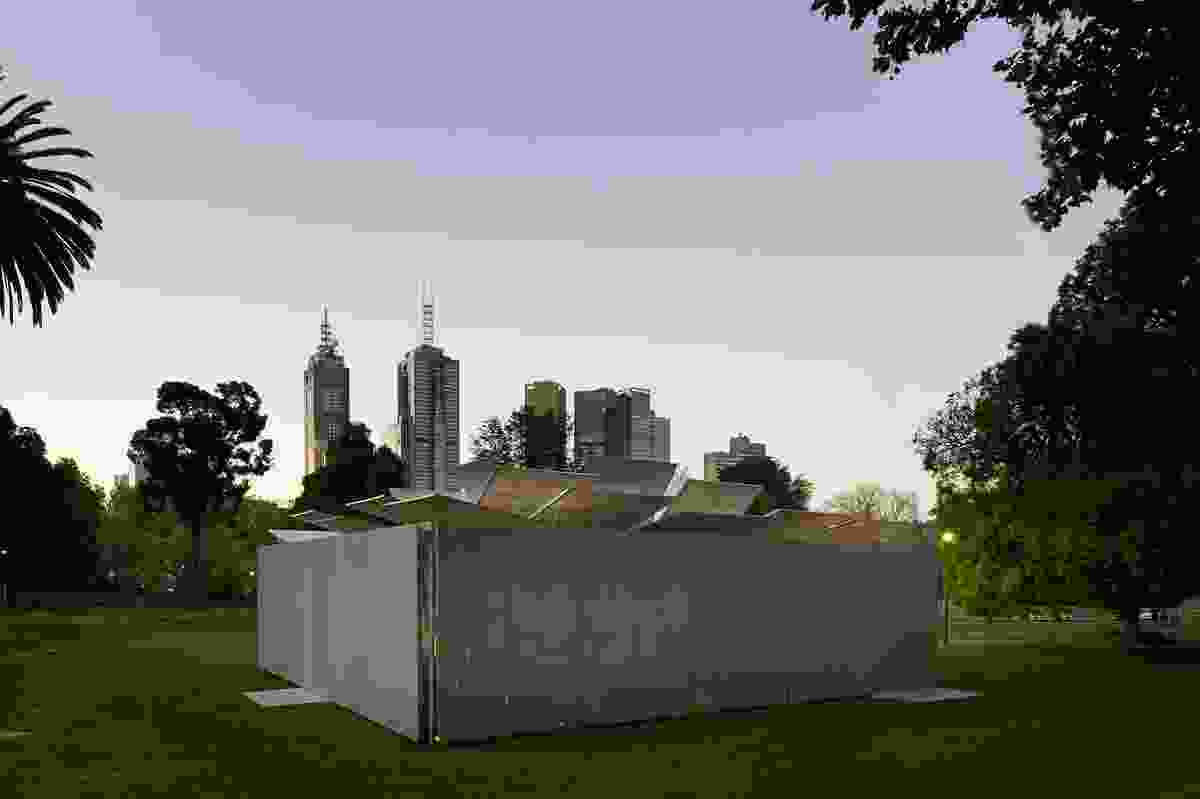