The Australian Islamic Centre, located in Newport in the western suburbs of Melbourne, is designed with local practice Elevli Plus Architects. The design establishes a new architectural language for Islamic architecture in a contemporary Australian context.

At the 2016 Pritzker Laureates Conversation, held at the United Nations headquarters in New York on 5 April, laureates were asked to present a three-minute speech on what they thought were the challenges ahead for the built environment. Murcutt surprised everybody by making an empassioned speech not about environmental issues or the ethos of “touching the earth lightly” for which he’s so well known, but rather a project he’d been working on for the past decade – one he described as “an extraordinary enlightment”:

I’m going to be talking about a challenge that I see of the built environment and that is at yet, not fully formed or detailed, or defined. It is the challenge arising from social and religious prejudices which increasingly underpin some truly unacceptable social and political activities, at least in my world.

So, the project I will talk about briefly is a mosque that I’m doing for 1,000 participants.

Migration has brought many from the Islamic nations to Australia. And practitioners of Islam are proposing mosques. In my country there are huge problems. I think that we might not be alone in that. I’ve read about New York also having these difficulties.

The real issue is fear and in taking on the mosque, it’s been a very demanding project. I had been advised that perhaps I shouldn’t take it on.

It has ended up being one of the most wonderful projects anybody could have actually participated in. The clients have been marvellous.

So I took the project on and over the last 10 years, it has been an extraordinary enlightenment for me.

It is a mosque that is not exclusive, but inclusive. It’s a mosque that you can see into. It is a mosque that has water gardens but not entirely within walls. It is a mosque that contains light shafts, it contains light lanterns. The lanterns are coloured. These roof lanterns face north, south, east and west. The north [lanterns] are green. Green for Islam is nature and is beautiful. East is yellow. Yellow is for paradise. Red [to the west] is for blood, which gives strength. Blue is for the sky and this is to the south. As the sun moves around during the day, it is so beautiful to see the light now coming in. It’s only two months away from completion.

I’m putting forward the idea that, in a society that is anti-Islam, we can produce some work that can actually bring Islam back into our community and become an addition to the culture.

Our country has the most wonderful culture that has been added to year after year by the migration of people. It is an amazing place and Islam can be another added aspect to our culture.

I do enjoy this project so greatly and the people so greatly. For me it is one of the great joys of my practice of 47 years.

ArchitectureAU attended a tour of the mosque’s construction site during the 2016 Open House Melbourne weekend, 30-31 July, during which architect Hakan Elevli explained that the local Islamic community “wanted to create the first contemporary Australian-influenced mosque” and that’s why the community approached Murcutt to design the building.

“The idea was to make this a very transparent building. It was about making it very welcoming to everyone, not only to muslim people but to people of all faiths and communities,” Elevli said.

The building, which is funded by the community, is being constructed from raw concrete formed in situ. A concrete wall extends from the front of the building in the form of a gestural welcoming arm.

The male prayer area will be faced with glass, presenting an open, transparent space.

“Normally mosques are always enclosed because it’s a space for worshippers to feel at peace and they’re not thinking about anything else,” Elevli explained. “That’s the only reason why mosques are enclosed.

“But because of the way Australians think about buildings, Glenn wanted to make this open. He really wanted to make sure people felt really comfortable in this environment. So we’ve created this open-ended building.”

Towards the rear of the space, a concrete half-wall and reflection pond behind the minbar allows light to penetrate the space.

“When you walk through the mosque, you feel that it’s taking you through to the light,” the builder Mohammed Haddara explained.

The female prayer space will be on a mezzanine level and while it will still be open, it will be faced with a louvred screen to preserve modesty.

On the roof, 96 gold-painted lanterns funnel light into the spaces below, creating a tessellated pattern of yellow, red, green and blue triangular oculi in the ceiling. Odd numbers are significant in Islam, hence the field of three-sided lanterns.

The exhibition, Glenn Murcutt: Architecture of Faith, will be on show from 9 August 2016 to 19 February 2017 at the Ian Potter Centre, NGV Australia. 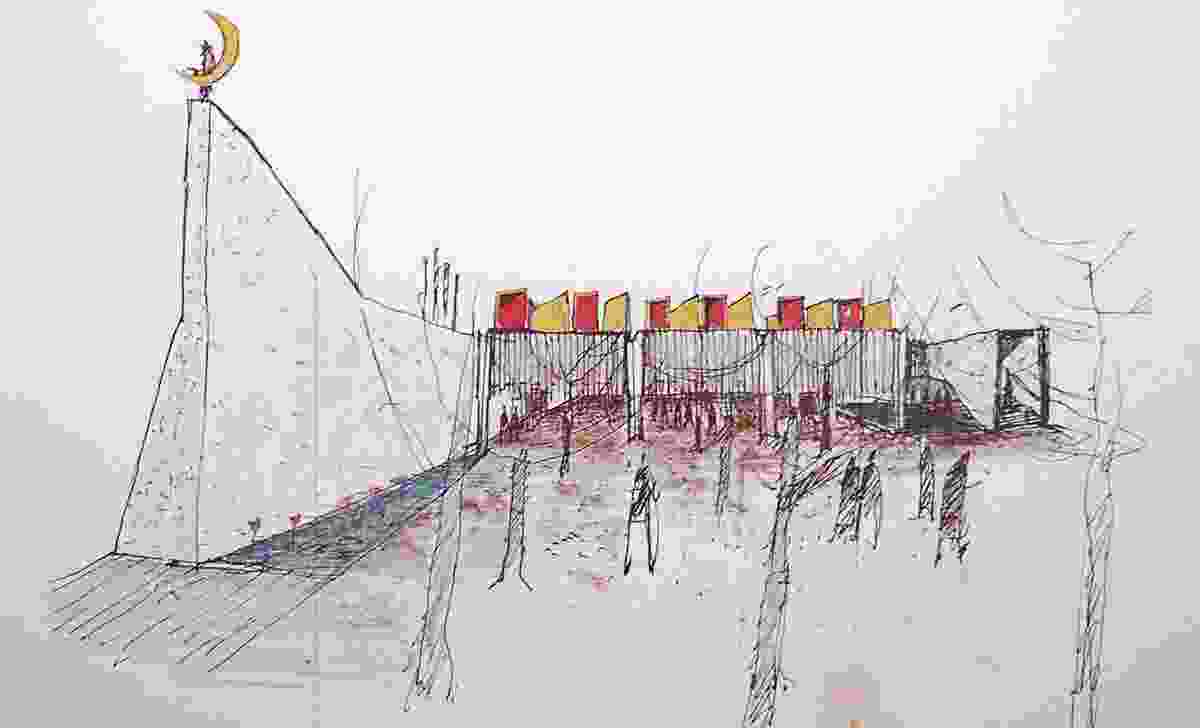 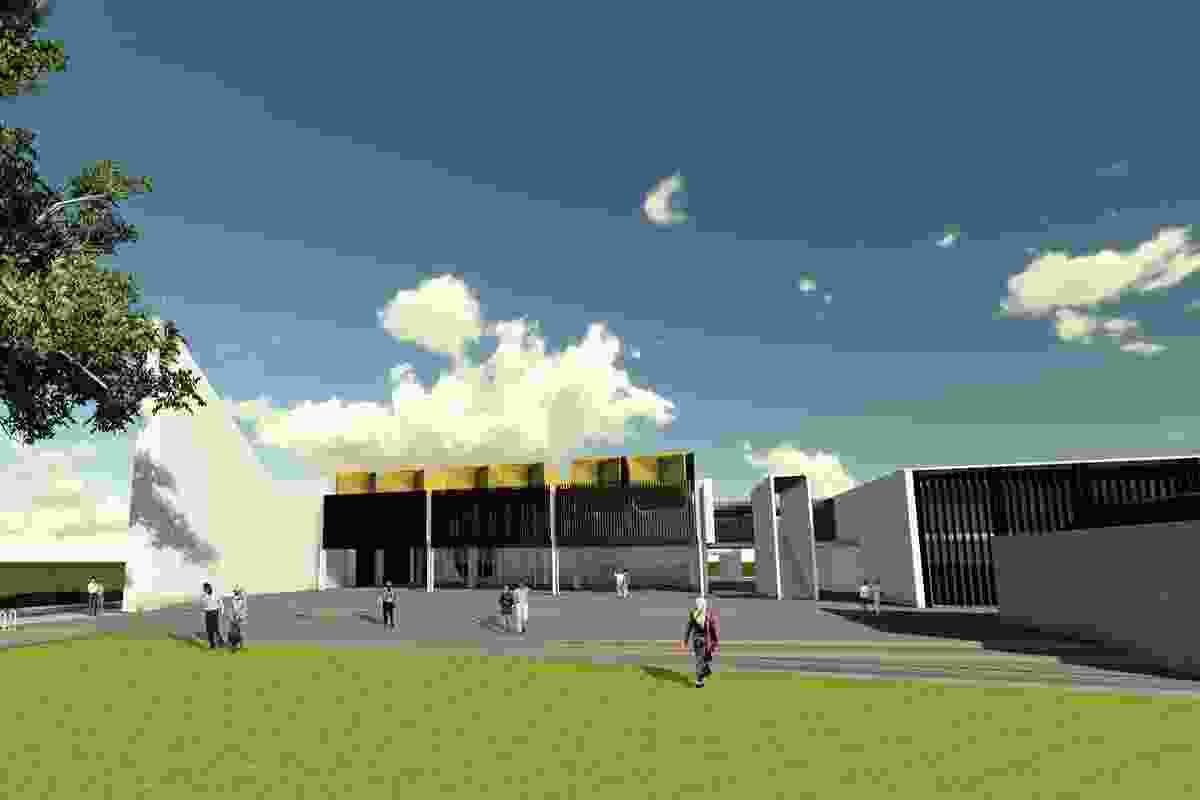 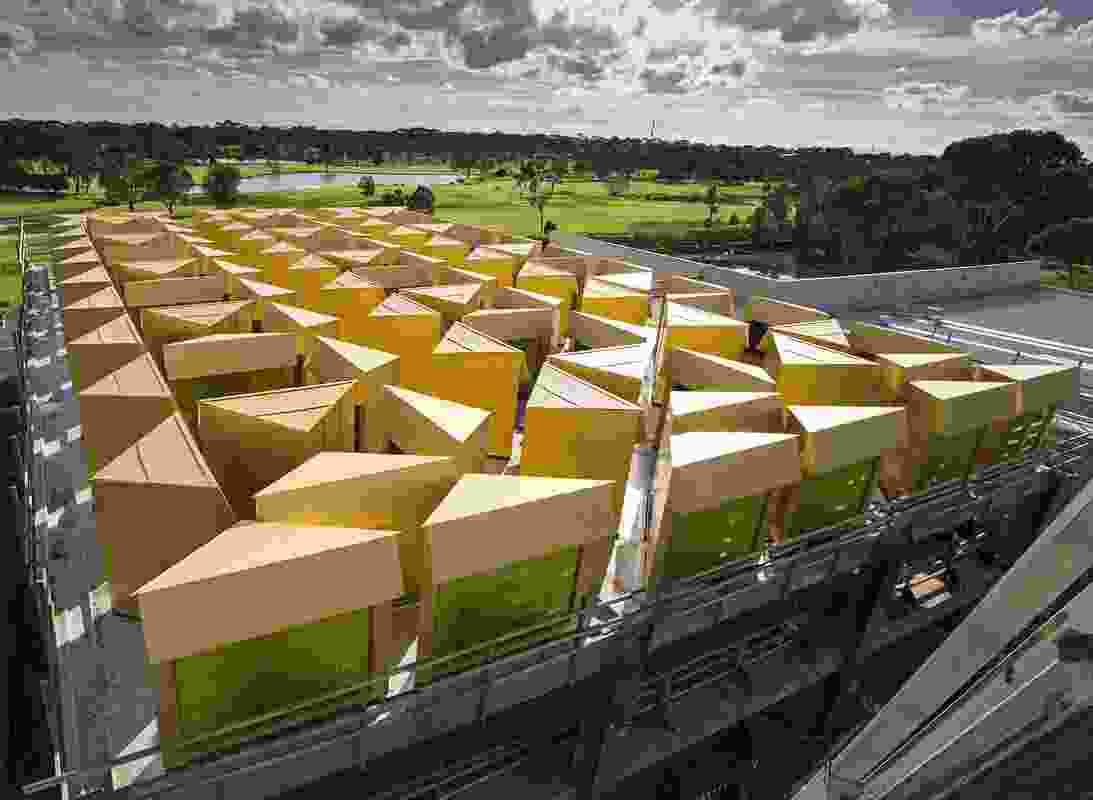 The Australian Islamic Centre by Glenn Murcutt and Elevli Plus Architects features 96 gold painted lanterns which funnel coloured light into the space below. 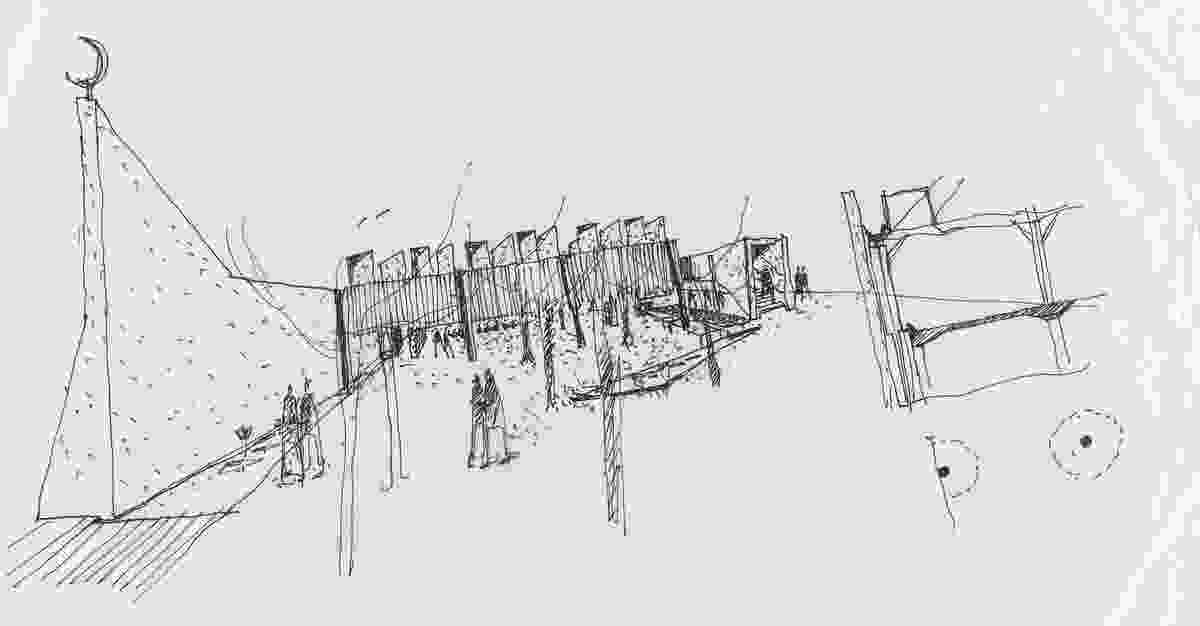 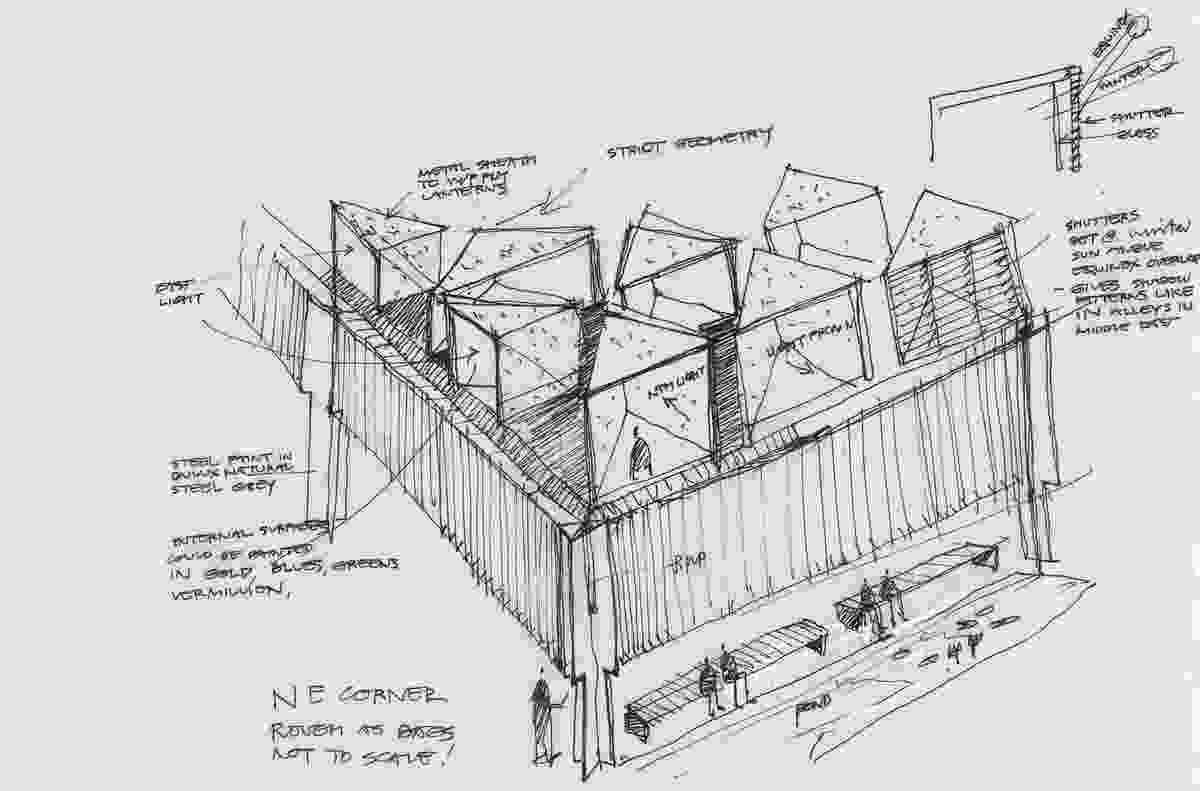 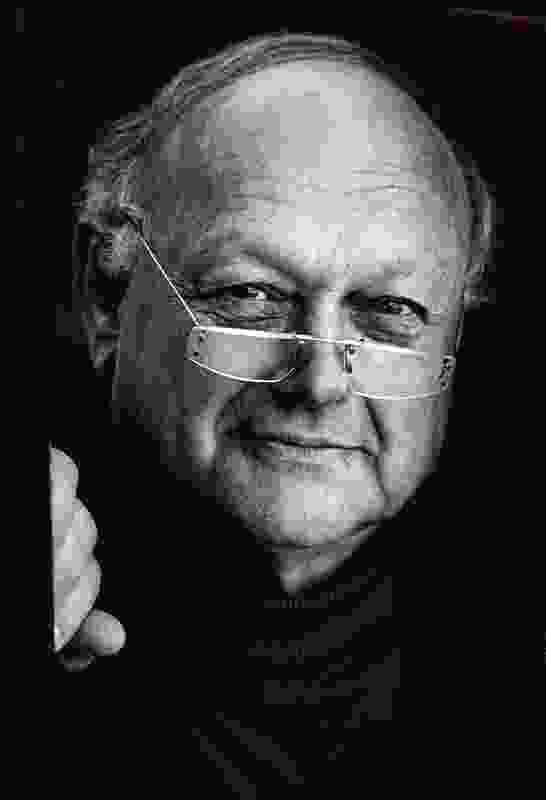 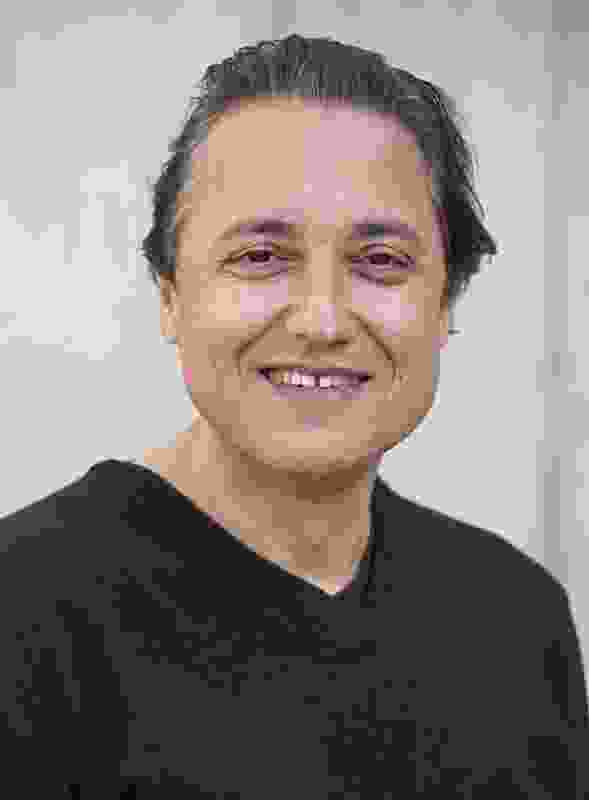 Hakan Elevli of Elevli Plus Architects.