Make-up entrepreneur Napoleon Perdis commissioned Studiobird to design an interior for his new South Yarra concept store that includes cosmetics, a foray into lifestyle retailing and a make-up academy.

The entry is a shopfront display made inhabitable, with a place to sit and wait, a space for display and a space to be displayed in.

Inspired by the personality of consummate showman Perdis, Matthew Bird, director of Studiobird, draws on the theatrical other-worldly glamour that accompanies the cult of celebrity. Part showmanship and part show, Napoleon Perdis Chapel is a telescopic sequence of staged experiences that draw you deep into the interior space – through the cosmetics section, past the homewares and clothing, up the stairs and into the world of the make-up academy.

Visitors begin in the parlour. The entry is a lushly conceived waiting room – a shopfront display made inhabitable with a place to sit and wait, a space for display and a space to be displayed in. Here, the customer becomes the performer. The parlour has a surreal, dreamlike quality. On its rich berry pink wall hangs a sculpture embroidered with peacock feathers. Meanwhile, a collection of owls watch from their perch on the stairs and above, rather disconcertingly, hangs what Bird affectionately calls the “Barbarella Frankenstein Egg” chandelier.

The peacock feathers evoke a Greek myth in which the giant Argus guards Zeus’s captured mistress Io (transformed into a white heifer) for Zeus’s jealous wife Hera. The owls, the traditional companion of the goddess Athena and a symbol of her wisdom, are from Perdis’s own collection and are one of many references to his Greek heritage within the interior. And the Barbarella Frankenstein Egg chandelier is simultaneously sensuous and strange. Designed to “captivate the street audience,” it is made from a metal frame hung with blonde wigs. At night, when the store is closed, it is lowered to take centrestage in the window.

The make-up room is inspired by the glamour of the golden age of the silver screen. Pearlescent metallic corrugated sheets hang from the walls like a red carpet gown, softly glowing under the bright lights of the make-up mirrors. The corrugated wall references not only Hollywood glamour but also Perdis’s personal story of an Aussie Greek boy made good, evoking memories of the suburban backyard fence.

Beyond a display of homewares that Bird describes as “influenced by the aesthetics of the Soviet-era brutalist bus shelter,” a row of display cases forms an entry colonnade reminiscent of the columns of the Parthenon. The final space on the ground floor displays a collection of clothing sourced by Perdis, hanging in mobile, open-fronted wardrobes inspired by the geometric forms of an abstracted Greek temple.

At the top of the stair, for respite from the bright lights, visitors are displaced into the more contemplative world of Mojave Desert mid-century modern. The experience is disconcertingly convincing. Cactus green walls, gravel-patterned flooring, a repurposed rug and a blue sky backdrop evokes Palm Springs in California, where Perdis has a home.

And finally, to the make-up academy. The black make-up stations echo the silver stations downstairs and are staged at an angle to the corrugated walls. The buzz and excitement of the dressing room are tangible and here beauty students are performers at their mirrors, waiting for the show to start. The make-up mirrors frame a curtain and when closed, the curtain creates a theatre set printed with a desert backdrop. At the end of the space is a balcony overlooking the parlour, where one sees into the depths of the Barbarella Frankenstein Egg to appreciate its construction. From this position, the colours of the parlour and the desert meet, bringing together the start and the finish, the alpha and omega.

The interior of Napoleon Perdis Chapel is a fragmentary journey through the multiple personalities of brand and celebrity and product and purchaser found within the beauty industry. The interior holds together like a dreamscape, in which the elements of the dream are not continuous or connected but shift and tug on undercurrents of fleeting thoughts and inspirations.

Napoleon Perdis Chapel contemplates the shifting role of retail on the high street. In an age where we can buy almost anything online, what can a contemporary retail space offer? What Studiobird offers is a theatrical experience, where the customer is made over and becomes a performer. Studiobird is not just searching for the final cosmetic effect, the singular glossy image, but is interested in immersing the customer in the whole performance. When purchasing cosmetics, one is never quite sure if one is being sold smoke and mirrors. But who cares? After all, that’s what make-up is all about and the entire performance should always be entertaining. 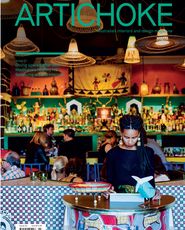 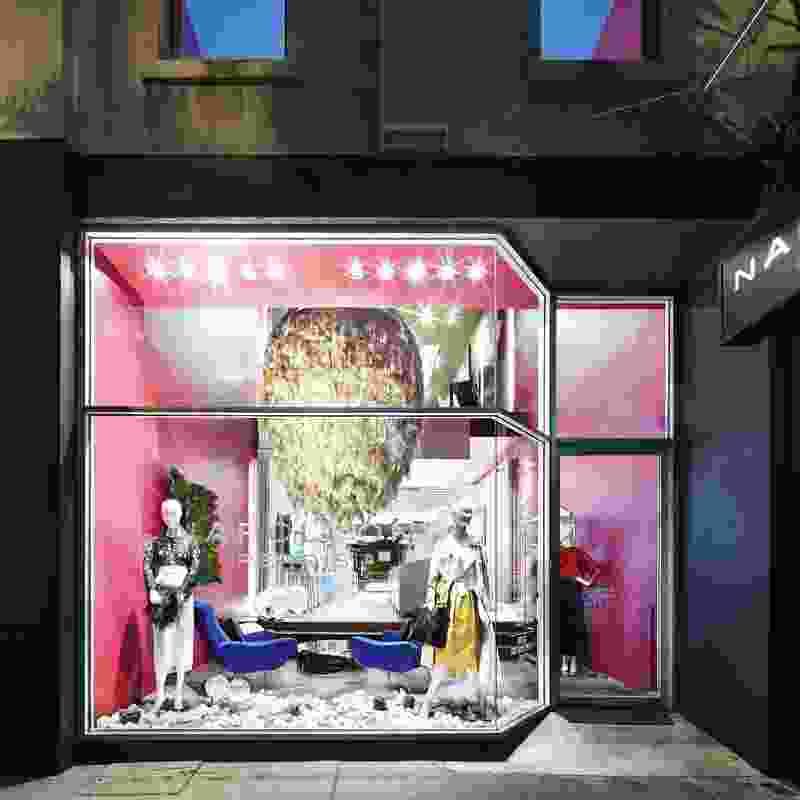 The entry is a shopfront display made inhabitable, with a place to sit and wait, a space for display and a space to be displayed in. 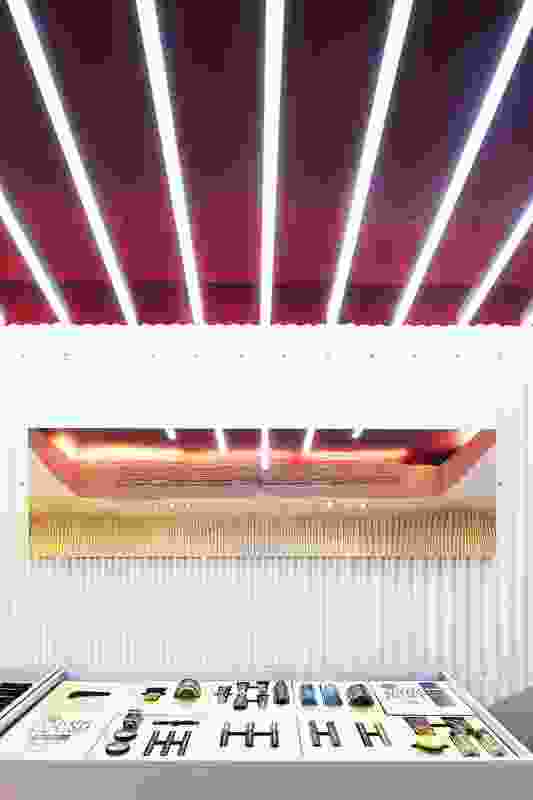 The make-up room has walls of pearlescent corrugated sheets. 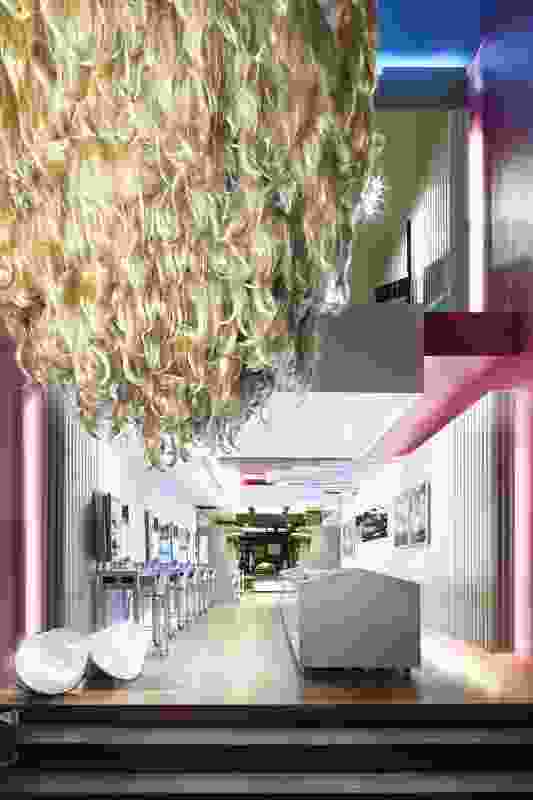 The Barbarella Frankenstein Egg is designed to “captivate the street audience,” drawing their gaze deep into the space. 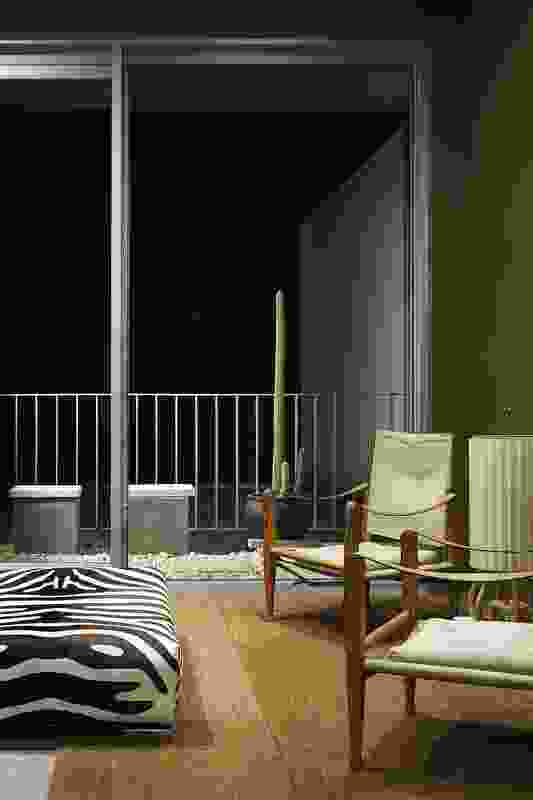 The “Mojave Desert” relaxation space is on the upper floor. 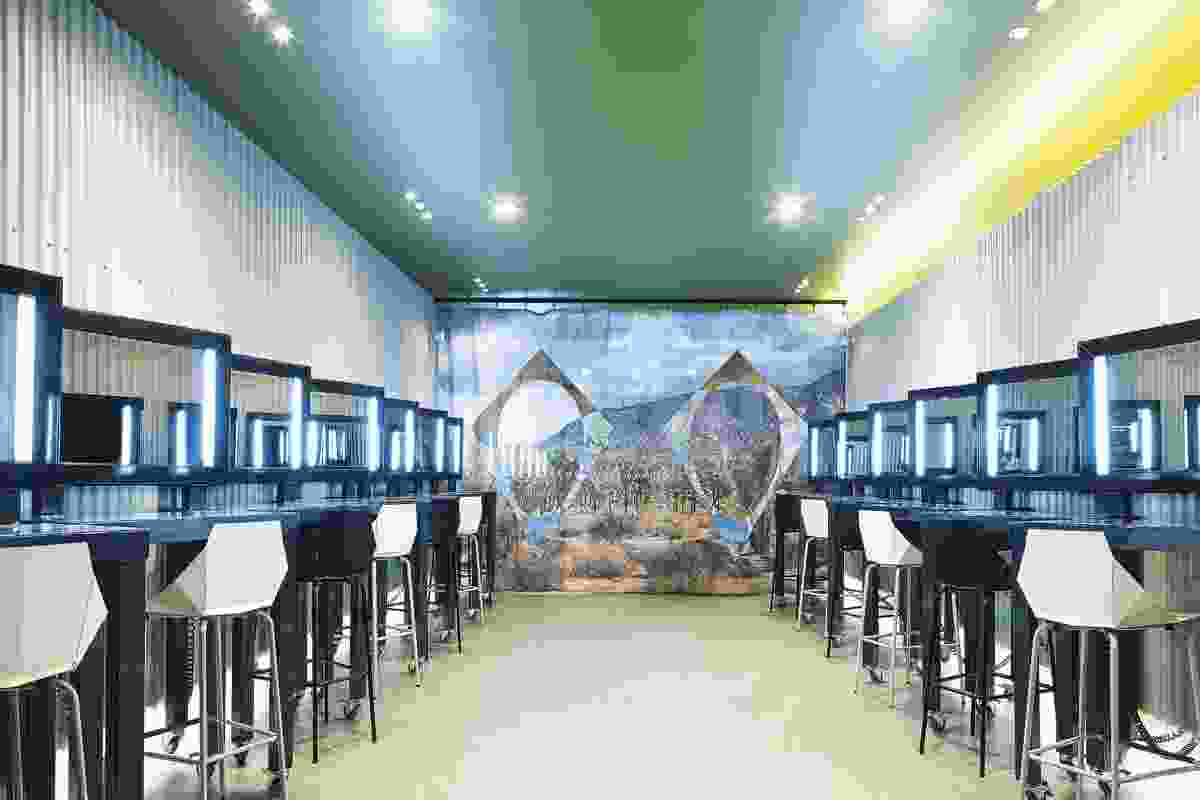 Upstairs, the make-up academy features black make-up stations and a curtain that acts as a theatre set backdrop.