An ambitious yet ultimately unrealized design for a cathedral in a monastic town in Western Australia by influential engineer-architect Pier Luigi Nervi reveals the growing modernist vocabulary for church buildings during the postwar period.

Fr Mauro Enjuanes showing the model of the cathedral to a group of local residents, c. 1959. Accession number 74893P.

In the June 1960 issue of Australian Architecture Today, a feature article announced that Australia was to receive its “first Nervian structure.”1 Pier Luigi Nervi was Italy’s most influential modern engineer and architect, and was renowned worldwide for his daring and elegant reinforced concrete hangars and sports arenas. It would have come as a surprise to readers of the issue to learn that Nervi’s first commission in Australia was for a cathedral in a remote location: the monastic town of New Norcia, 132 kilometres north of Perth, Western Australia. The Benedictine community at New Norcia (established as a mission in 1847 by the Spanish monk Dom Rosendo Salvado) was unable to raise the appropriate funds for the project and the building never materialized. However, the plans and models, which now reside in the New Norcia Archives, were widely publicized in Australia and internationally at the time. The unbuilt project remains important in mapping the international dialogue about modern liturgical art and architecture during the postwar period.

While population and economic growth largely spurred Australia’s postwar boom in church building, the desire for a new cathedral in New Norcia was fuelled by a quest to make the town a pilgrimage site. In 1957, the then Abbot of New Norcia, Gregory Gomez, approached the International Institute of Liturgical Art (based in Rome) to design the new religious complex. Shortly after, the institute’s own architect, Carlo Vannoni (along with the engineer Francesco Vacchini), produced plans for the monastery, while Pier Luigi Nervi and his son Antonio Nervi produced plans for the cathedral. Nervi never visited New Norcia himself and enlisted the aid of Australian engineer George Hondros, based in Perth, whom he met in Rome to discuss the site.2

The complex was to be situated where the cemetery is currently located, between St Gertrude’s College and St Ildephonsus’ College. The plans for the church show three driveways and two monumental pedestrian ramps leading visitors to the central church. A monks’ passageway was to provide access from the church to the monastery through the chapterhouse. The monastery complex was to grow from a central cloister. The ground floor would feature a library, refectory, classrooms and a recreation room, among other facilities, while the two four-storey slabs emerging from either side of the cloister were designed to house around 114 monks.3

The canopy of Nervi’s cathedral was to be composed of three soaring reinforced concrete paraboloid vaults supported by three ribs that converged at the centre. The vaults were to symbolically represent the Holy Trinity. Incredibly, the prefabricated concrete for the canopy was to be shipped from Italy to Australia. The Swiss artist Willy Kaufmann designed the stained-glass windows for the vaults.4 The church’s exterior was also to contain a series of blue and white mosaics depicting the dispersion of St Benedict’s disciples across the globe.

The cathedral was to have a seating capacity of 820 people with standing room for about 1,000 more people. The height from the base of the church to the centre of the canopy was to be thirty-eight metres. The floor plan responded to a growing movement toward greater congregational participation in the Mass, anticipating the reforms to church architecture proposed via the Second Vatican Council (1962–65). With seating wrapping around both the sanctuary and choir, pilgrims gathered within the nave would have been in greater union with the liturgy.

The church’s novel, simple design was praised for answering the demands of contemporary taste in architecture, while simultaneously meeting modern theological requirements in that it presented its Trinitarian dedication through its structure, thereby eliminating the need for excessive ornamentation.

Before the New Norcia project, Nervi had worked on three other ecclesiastical projects as engineer, including with Marcel Breuer on the concrete Saint John’s Abbey Church in Minnesota (1953–61). The capacity of concrete to provide appropriate symbolic expression in ecclesiastical buildings had long been debated in liturgical circles in Europe and the USA. In 1933, the American journal Liturgical Arts featured a series of articles including “A Philosophy of Design for Concrete,” “Reinforced Concrete and Ecclesiastical Architecture” and “The Use of Concrete in Ecclesiastical Building.” Dominikus Böhm’s Gothic expressionist Church of St Engelbert in Cologne-Riehl, Germany (1932) was an early precedent for concrete church architecture, and it was surely an influence for Nervi.

Indeed, Nervi’s design responded to a growing modernist vocabulary for church buildings that continued to be promoted in Latin America in the late 1950s. The design shared the same baroque curves that were favoured by Latin American modernists such as Oscar Niemeyer and Félix Candela. Similar to Nervi’s church, Niemeyer’s Cathedral of Brasília sought to resemble the spiritual in its structure – in Niemeyer’s case, the crown of thorns.

These Latin American connections are not surprising considering Nervi’s previous collaborations with Italian-Brazilian architect Lina Bo Bardi in Rio de Janeiro.5 While the plan for Nervi’s complex invites immediate comparison with Le Corbusier’s Dominican convent at La Tourette, France (1956–60), it did not share the Swiss architect’s cubist preoccupations. Instead, it favoured grand processions over labyrinthine cloisters. With ideas encompassing imposing monumentality and designs for sweeping esplanades, the plan displayed a Corbusian functionalism, but one that was mediated through a baroque sensibility characteristic of the 1957 pilot plan for Brasília (Brazil’s new capital designed by Lúcio Costa). Indeed, in a 1959 article in the Italian journal Casabella , Nervi expressed his fascination with a model of Niemeyer’s Chapel of Our Lady of Fatima, a small church designed to occupy a typical housing block ( superquadra ) in Brasília. Nervi, commenting on the chapel’s curving parasol, wrote that it was “impossible to conceal our wonderment at such a daring technical feat.”6 The plan for New Norcia unmistakably repeated a sensibility similar to that found in the community of a superquadra of Brasília, with its Corbusian residential quarters uniting around a curving sculptural piece that symbolized the community core.

While the New Norcia community was gathering funds for the scheme, images of the proposed church and monastery complex circulated nationally and globally through design journals including France’s L’Architecture d’Aujourd’hui . In an effort to gather donations for what was estimated to be an £800,000 scheme, the article featured in Australian Architecture Today reminded its readers that the community of New Norcia housed more than 500 Aboriginal and white children: “In the distant North-West, monks from New Norcia, together with Benedictine sisters, devote themselves to the case of full-blooded Australian natives.”7 In addition, two large models were produced to showcase the design at national and international arts exhibitions.

– Isabel Rousset is a postdoctoral research associate in architectural history at the University of Sydney.

– Annette Condello is the director of graduate research and a senior lecturer in architectural theory, culture and design at the School of Design and the Built Environment at Curtin University. 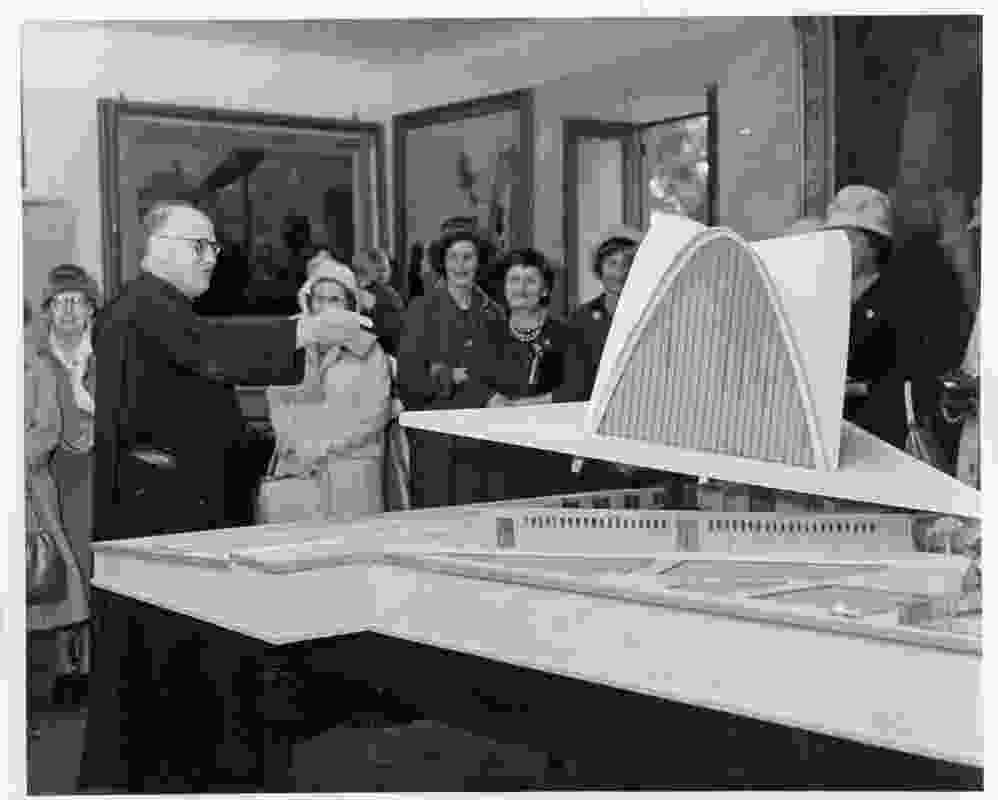 Fr Mauro Enjuanes showing the model of the cathedral to a group of local residents, c. 1959. Accession number 74893P. 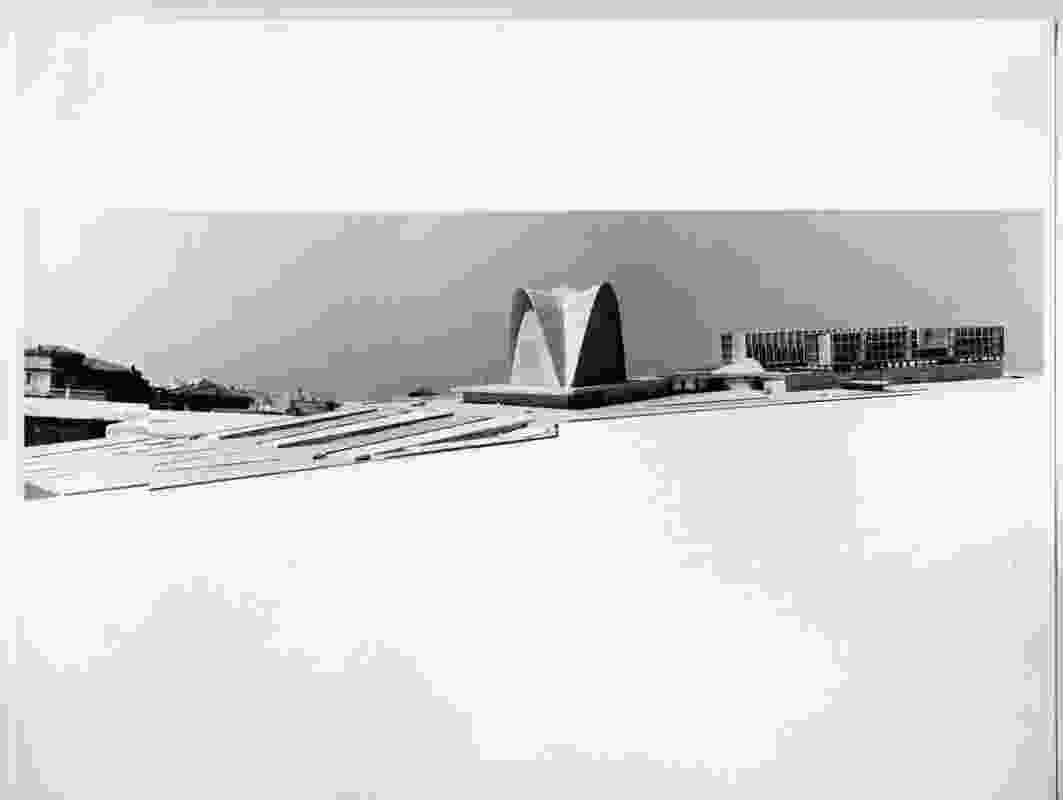 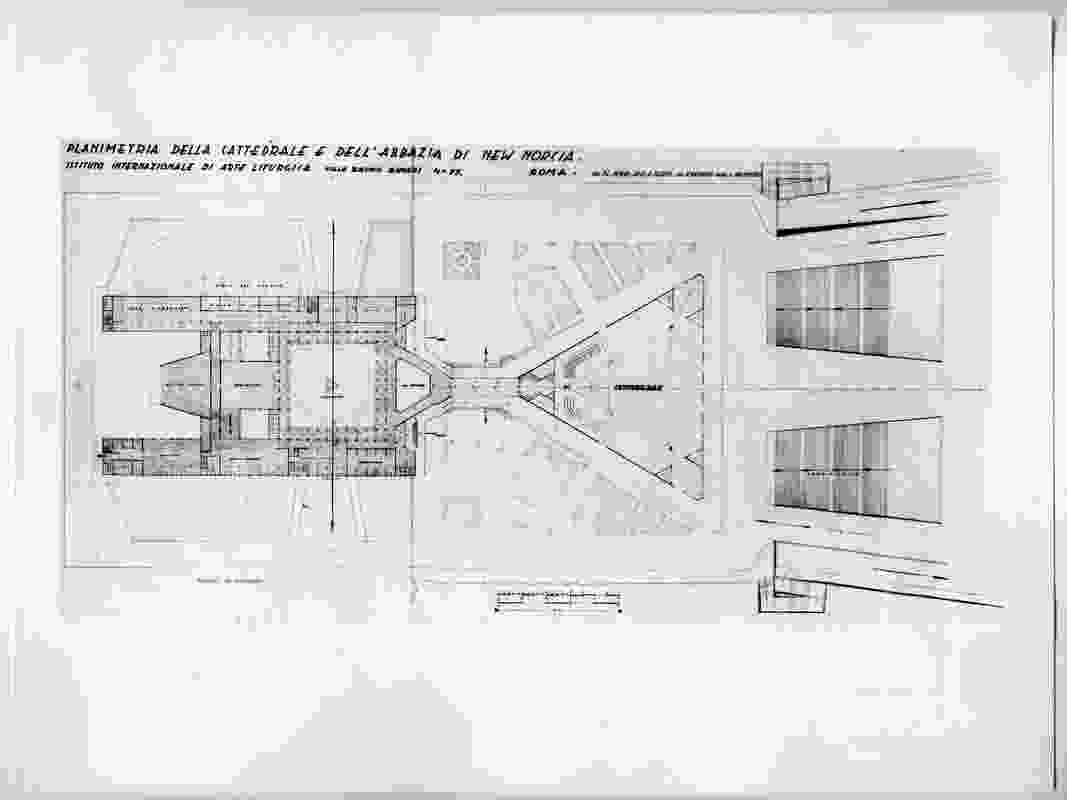