Located in Royal Park, Melbourne’s oldest and least horticulturally contrived public domain, the new Royal Children’s Hospital (RCH) is the Southern Hemisphere’s largest tertiary paediatric hospital and the most ambitious hospital redevelopment undertaken by the Victorian Government. Replacing the old hospital on the corner of Flemington Road and Gatehouse Street, built in 1963, the RCH was opened by Queen Elizabeth II in October 2011.

Before construction, legislation was put in place limiting the size of the new RCH so that it could not exceed the 4.1 hectares of the old hospital site; this was to ensure that there would be no net loss of parklands. To achieve this, demolition of most of the old hospital buildings was a key element in the successful Lend Lease bid with Billard Leece Partnership, Bates Smart Architects and Land Design Partnership (LDP) landscape architects. Included in the impending Stage 2 redevelopment is a $4.6 million parklands reinstatement, beginning towards the end of 2013, which will include the welcome removal of an above-ground car park occupying the southern corner of Royal Park. It is expected that the new RCH, along with the retail and hotel building complex incorporated in the Stage 2 works, will further integrate the whole redevelopment within the parkland setting.

Guiding the design principles incorporated into the competition brief for the new RCH was the idea that there are positive therapeutic benefits to patients and staff of contact with natural light and views of vegetation. As a consequence, where practicable, design considerations have striven to utilize the characteristics associated with natural environments to inject a calmative and inspirational essence into the sterile, artificial, “institutional” attributes necessary to the function of modern hospitals.

Spatial permeability between the outdoors and the interior has been the obvious aim of the buildings’ design, in particular with regard to taking full advantage of the unique opportunity to set the RCH within the predominately gum-studded, grassy-plains aesthetic that flavours much of Royal Park. The reconfigured relationship between inside and outside is epitomized by naming the airy six-storey atrium entrance hub “Main Street.” It links the RCH with Royal Park through a northern array of glass panelling onto a curvilinear LDP garden forecourt and a public play space, designed by Fiona Robbe Landscape Architects, that then flows out into the surrounding landscape.

Victorian regional landscapes are referenced throughout the RCH, through both themed wards and architectural design. The exterior concrete cladding of the hospital suggests the colours and textures of eucalypt bark, while festooned across the gently V-shaped western facade is a myriad of “petals” – gradationally toned glass sunshades designed to resemble a leaf canopy. Two roof garden terraces are accessible to staff and visiting day patients. Planting has been minimized to the use of sedums, liriopes, yuccas and planters containing weeping figs. The openness and sparseness of the planting palette creates a sense of spaciousness that is in keeping with the feel of Royal Park itself. Views spread from the CBD and Port Phillip Bay in the south around to the Macedon Ranges fifty kilometres north-west.

LDP was responsible for the overall landscape architecture on site. Green & Dale Associates, in conjunction with Melbourne Zoo, built an enclosure at the end of an internal courtyard suitable for the living requirements of nine meerkats. The adjacent LDP glass-surrounded courtyard, with modulating two-toned synthetic turf accessible to the half a dozen outpatient clinics around it, operates as a secure outdoor rumpus room. Rubberized concrete donuts that act as planter boxes resemble lifebuoys tossed on the swell and swale of grass. The coupling of the zoological and playground elements next to each other is a design masterstroke, serving to counteract the anxiety associated with hospital appointments and offering fun and distraction for young minds instead.

LDP’s use of vegetation to integrate the RCH within the park setting is achieved by mass plantings of native flaxes and rushes smattered with solitary red and yellow gums along the meander of a granitic, pebble-lined dry creek bed that also serves to capture run-off from the north-western area of the site. The design largely succeeds the challenge of subtly blending the periphery of the RCH site into the undulating topography and open woodland habitat of Royal Park. Pedestrian and maintenance vehicle access across the creek bed is by ironbark plank bridges. This level of site integration is not replicated to the east of the RCH, away from the inpatient block where patient privacy is paramount. Nevertheless, some smaller, more contemplative or educational outdoor spaces have been created adjacent to the clinical buildings, including two specific “therapy gardens” for patients in rooms abutting Royal Park to the east, and other terrace gardens for staff, parents and families. These gardens and courtyard terraces, which feature non-allergenic species like in the rest of the grounds, have been designed to help reduce the emotional stress of hospital visits through contact with lush vegetation that enhances pleasant sensory perceptions. 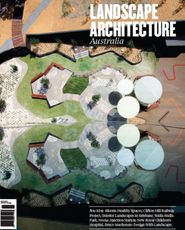 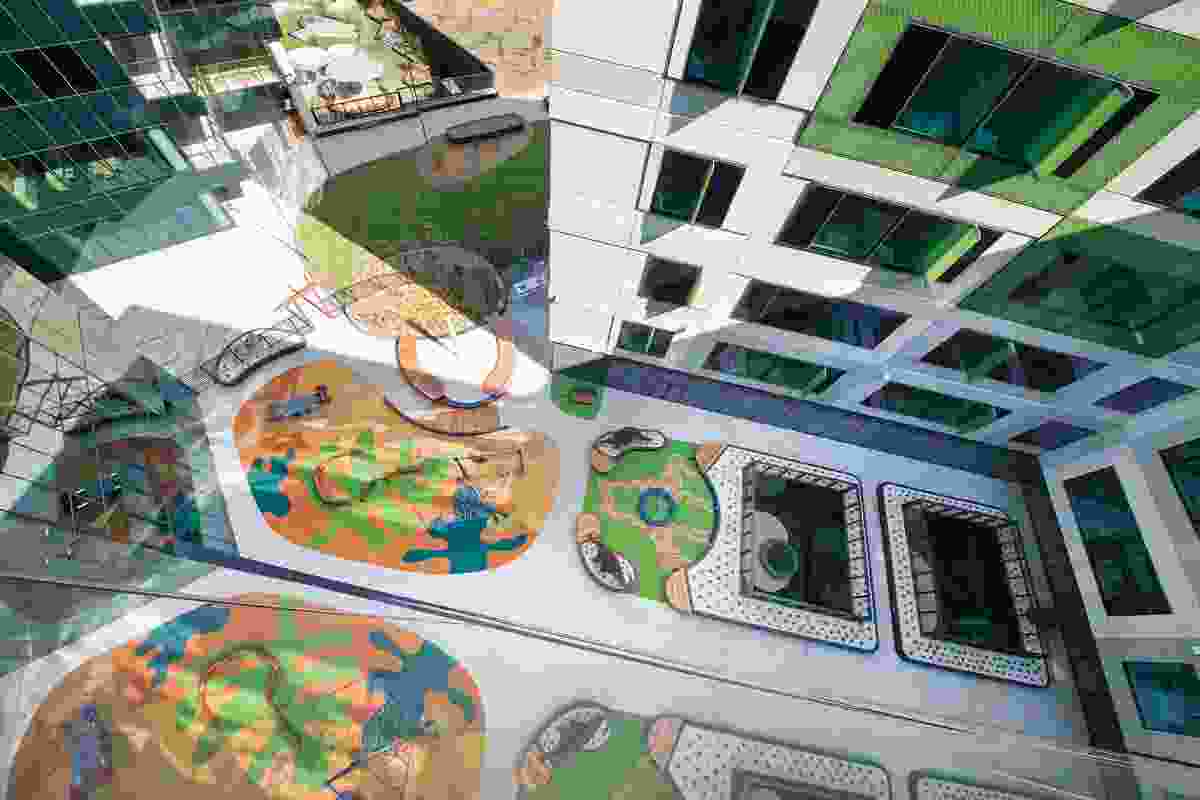 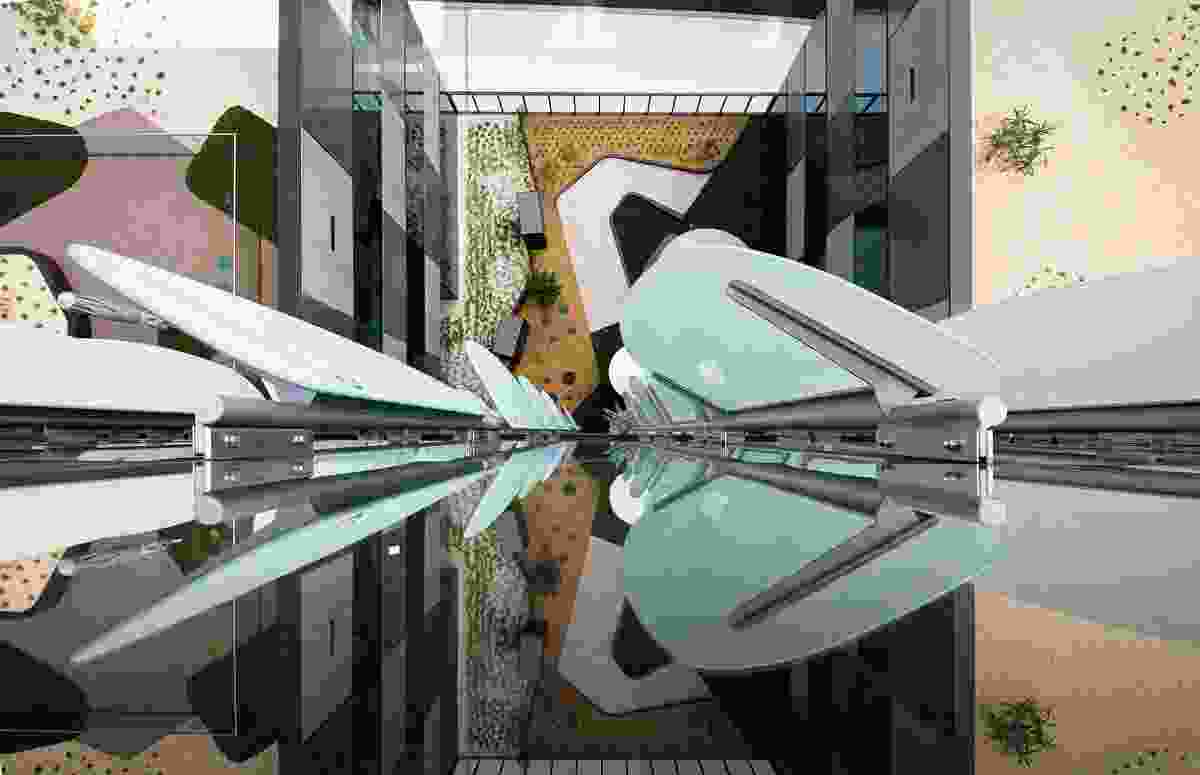 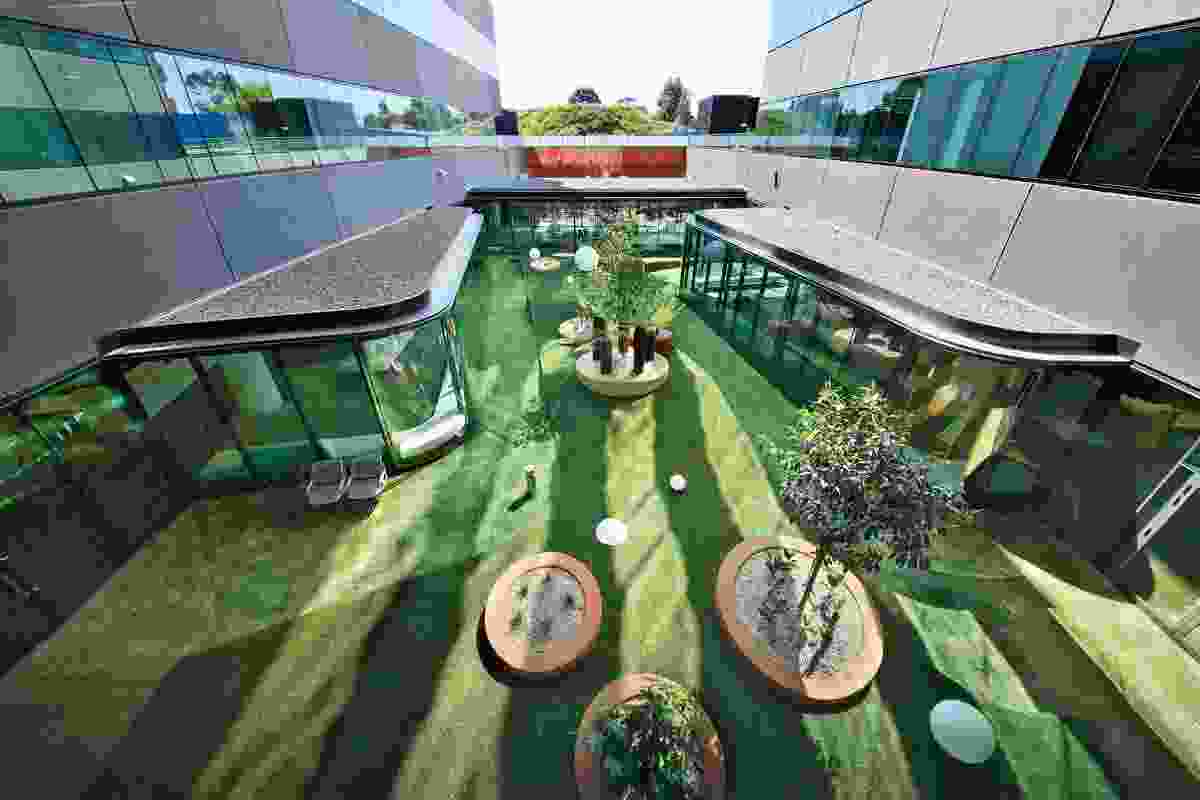 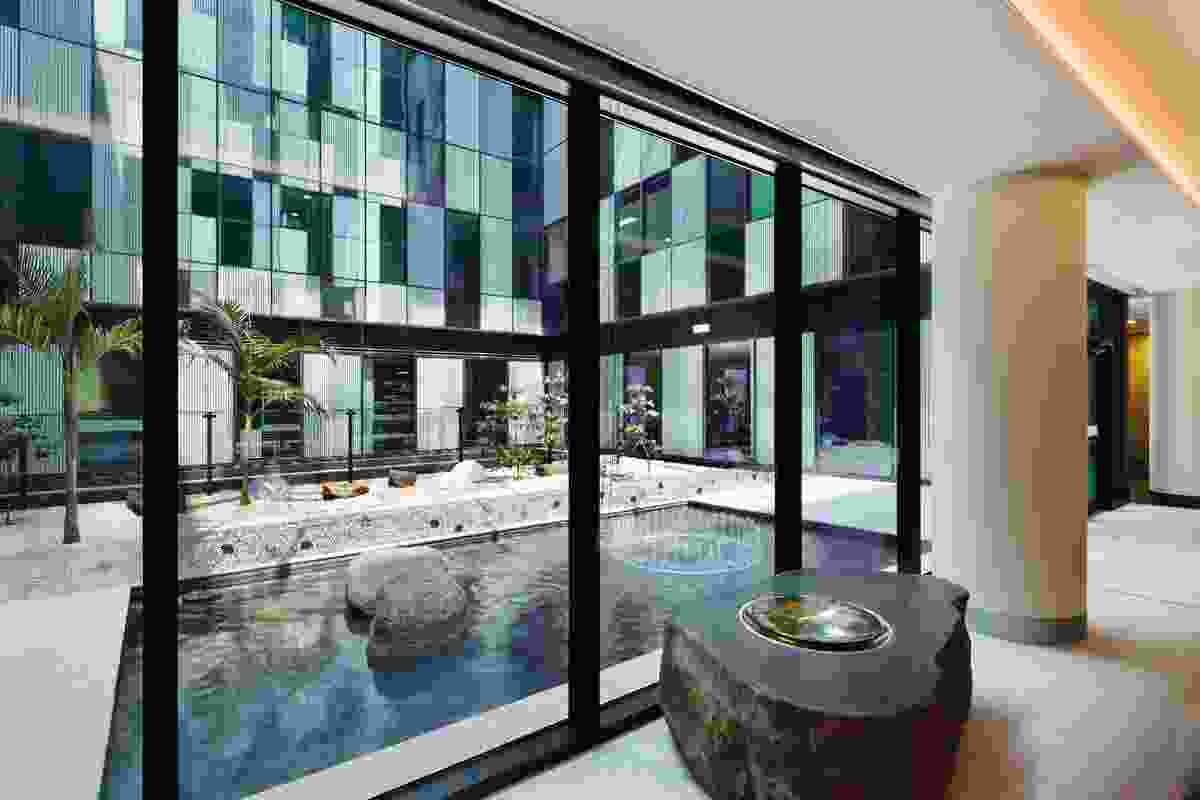 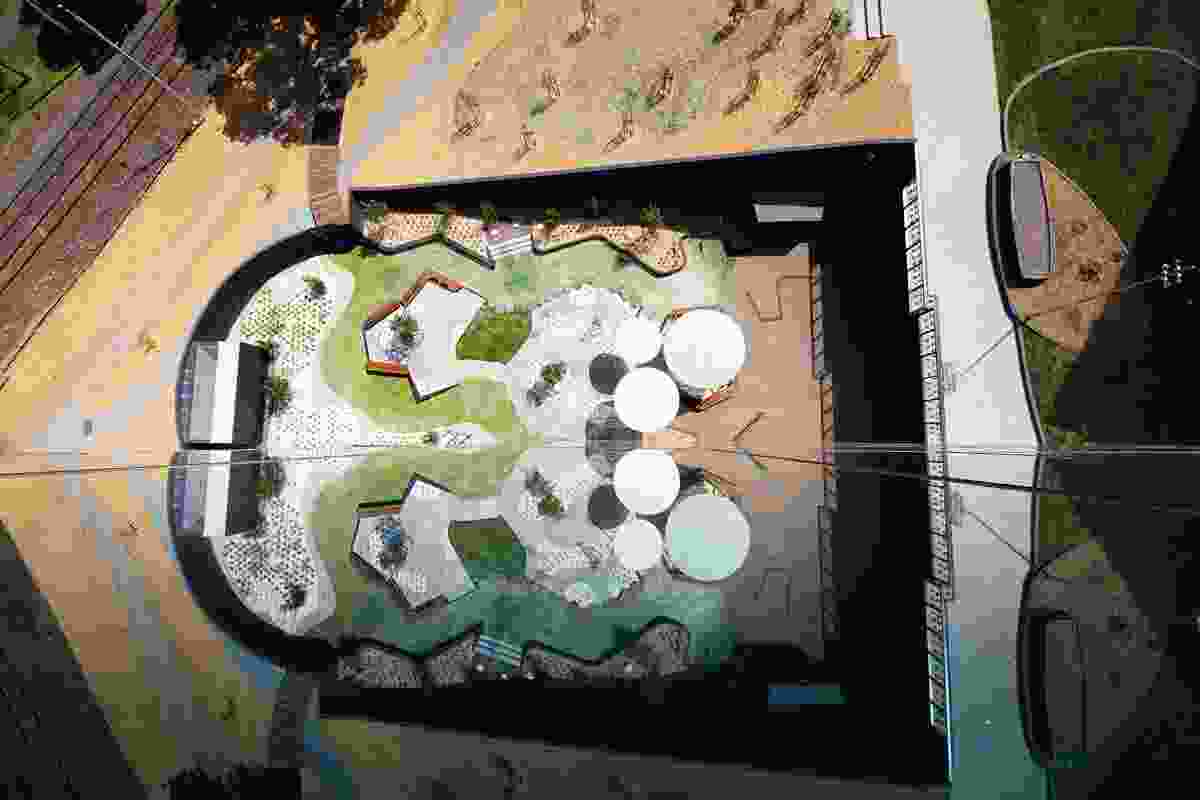 Aerial view of the childcare courtyard. 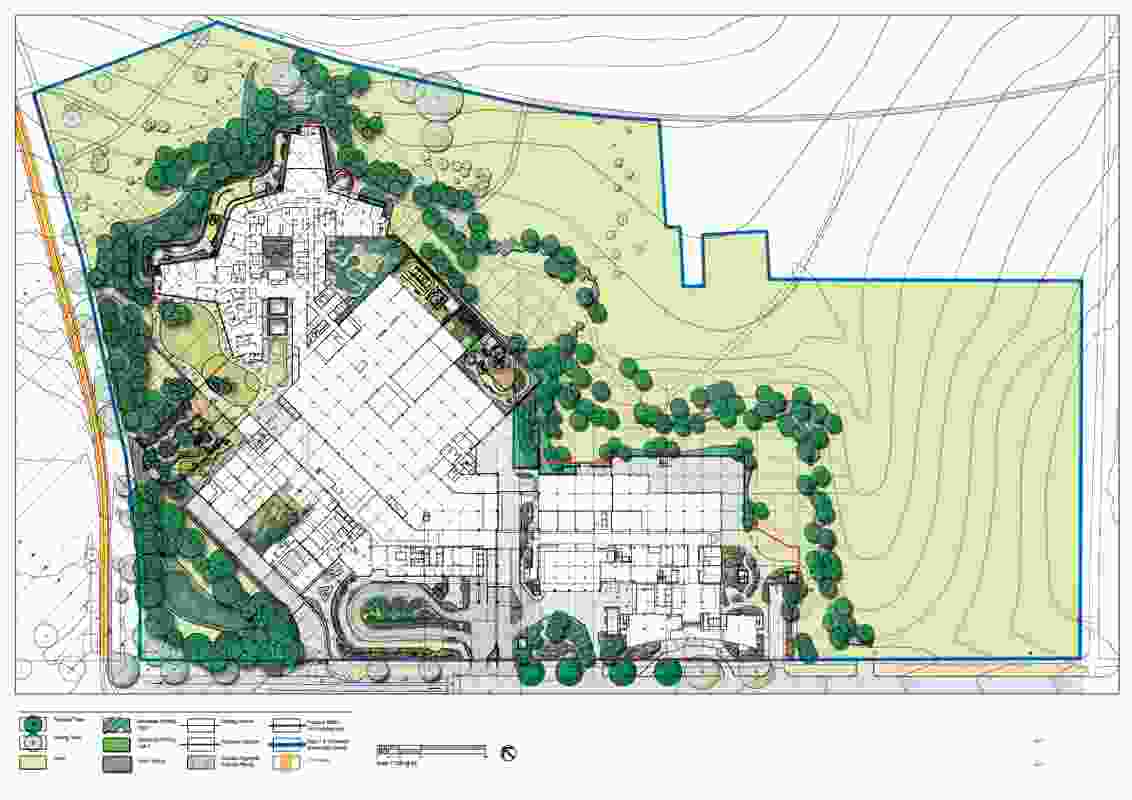