Melbourne-based architect Ben Milbourne reports from New York City where its healthy culture of philanthropy has yielded some of the world's most iconic and innovative public projects.

The United States has a rich history of philanthropy in relation to civic projects, delivering a broad range of innovative and iconic buildings, three examples in New York being: Carnegie Hall (Andrew Carnegie), New York Public Library (Samuel Tilden) and the United Nations Headquarters (John D. Rockefeller) – four if you count the Statue of Liberty, funded by News of the World and a public subscription effort.

This tradition is evolving in new and exciting ways with the emergence of online crowd-funding, delivering even more direct connections between the public and the initiation, development and delivery of civic projects, opening up new pathways for communities to participate in shaping their environment.

However, eliminating the link between funding and the public purse limits some aspects of accountability and does not address other issues manifest in public projects (especially those prominently in the public domain) concerning access, equity and how to obtain the most benefit for the greatest number of people.

During the final leg of the 2014 Dulux Study Tour, we visited many inspiring recent and historically significant projects in and around New York City, including the moving 9/11 Memorial, tours of SHoP Architect’s East River Waterfront redevelopment and Toshiko Mori’s Hudson Yards subway stations, and a side trip to Connecticut to visit Phillip Johnson’s Glass House.

One of the highlights of the 2014 Dulux Study Tour was our opportunity to visit Diller Scofidio and Renfro’s offices in New York, to discuss and visit their High Line project. The High Line is a 1.6-kilometre linear park built on a disused section of rail line – the elevated West Side Line – running through the lower west side of Manhattan.

Originally built in the 1930s, the West Side Line had been abandoned by the turn of the century, and for nearly thirty years was under threat of demolition. In 1999, Joshua David and Robert Hammond established Friends of the High Line to advocate for the its preservation and reuse as public open space.

In 2003 an open ideas competition received 720 proposals from 36 countries, with the commission eventually being awarded to the New York team of Diller Scofidio + Renfro (DS+R) a multidisciplinary practice with the urban design and landscape architecture practice James Corner Field Operations.

The first section of the repurposed High Line opened in June, 2009, running from Gansevoort Street to West 20th Street. The second section – from West 20th to West 30th streets, opened two years later. The third and final phase is set to open later in 2014.

…current estimated benefit is US$900 million with a significant legacy and continuing long-term economic and social benefits anticipated for the local community and beyond… the High Line has become a poster project for urban landscapes and catalytic urban renewal internationally.

Mathew Johnston, DS+R’s High Line project leader, has been involved from the competition stage, and noted at the outset of the project that it was anticipated to generate a net economic benefit to the Chelsea district of US$200 million, with an estimated construction cost of $100 million. While the final construction cost to date is closer to US$150 million, with Friends of the Highline raising close to US$40 million for construction and ongoing maintenance, the current estimated benefit is US$900 million with a significant legacy and continuing long-term economic and social benefits anticipated for the local community and beyond. For these and a host of other reasons, the High Line has become a poster project for urban landscapes and catalytic urban renewal internationally.

The High Line can be seen as the latest iteration of the United States and New York City’s rich heritage of philanthropy for civic projects. Perhaps of more interest is the emergence of new project funding approaches catalyzed by the new digitally enabled sharing economy, in particular the use of crowd funding for civic projects. Crowd funding typically involves supporters being offered tangible rewards and special experiences in exchange for their pledges. Arguably the most iconic example of this new approach is the + Pool proposal from two progressive design firms Family and PlayLab originally for the East River in Brooklyn, which we were shown during a visit to Family’s office in the West Village. The +Pool is a cross-shaped floating pool, that can be divided into four parts, with a lane swimming pool, kids area, sports pool and lounge. The most innovative and technically complex aspect of +Pool’s design is that it filters river water though the pools walls. The concentric layers of filtration materials that make up the sides of the pool are designed to remove bacteria, contaminants and odors, delivering clean, swimmable water.

The project was launched on Kickstarter in 2011 with an initial funding round delivering US$41,000 financing the initial design development and testing of the proposed filtration system with water drawn from the river. The second funding round enabling contributors to purchase a pool tile with their name or personalized message printed on it, raised US$275,000 and is being used to finance construction of a full-size prototype to be floated this year.

Dong Ping Wong of Family argues that while the digital platforms may be new, crowd funding as an approach for funding public projects is not new, simply evolving in response to the new tools available and contemporary interest in the sharing economy. He notes that the podium of the Statue of Liberty (itself donated by the people of France to the United States) was funded by a public subscription campaign lead by Joseph Pulitzer’s News of the World to the tune of US$100,000 ($2.3 million in today’s terms). The paper ran daily updates mentioning donors by name, administered a reward system and emphasized that no donation was too small (all seemingly drawn from the crowd-funder’s handbook) and successfully financing a base for Lady Liberty in 1885. However Dong also notes that while Kickstarter has been enormously successful in delivering public buy-in and getting a highly innovative and technically complex project off the ground, it is unlikely to supply the full level of funding required to deliver it. He mentioned that the project team have had interest from some of the High Line project backers in joining the +Pool board to provide invaluable experience in large-scale fund-raising and in navigating complex privately funded civic projects through the public approvals process.

For crowd funding of civic projects to be successful it needs to engage, robustly and transparently, with questions of governance, equity and feasibility.

However, not everyone sees crowd funding as the answer to delivering civic projects. In her essay Against Kickstarter Urbanism, architecture and design critic Alexandra Lange argues that the short attention spans and limited capital-raising capacity of crowd funding models limits their effectiveness for delivering large-scale long-term projects without institutional backing. For crowd funding of civic projects to be successful it needs to engage, robustly and transparently, with questions of governance, equity and feasibility. While crowd funding is good at surfacing new ideas, those ideas must be tested within the context of strategic planning at the urban scale, and although crowd funding is often successful in generating initial public interest, it’s not always a substitute for broad-based participation.

Private funds for public projects, in the US at least, continues to deliver highly innovative solutions for complex urban problems. While Australia does not have a significant history of philanthropy for civic projects (with some notable exceptions, including David Walsh’s exceptional MONA), crowd funding certainly has the potential to play a role in initiating innovative public projects. Leveraging the particular skills of architects – urban speculation, spatial intelligence and experience in navigating the approvals process – crowd funding offers a means of incubating new ideas in the civic realm, rather than a full funding model, where it can be used to supply seed-funds, community buy-in and momentum for innovative civic projects.

The 2014 Dulux Study Tour visited Chicago and New York, courtesy of Dulux and the Australian Institute of Architects. Read more about the 2014 cohort. 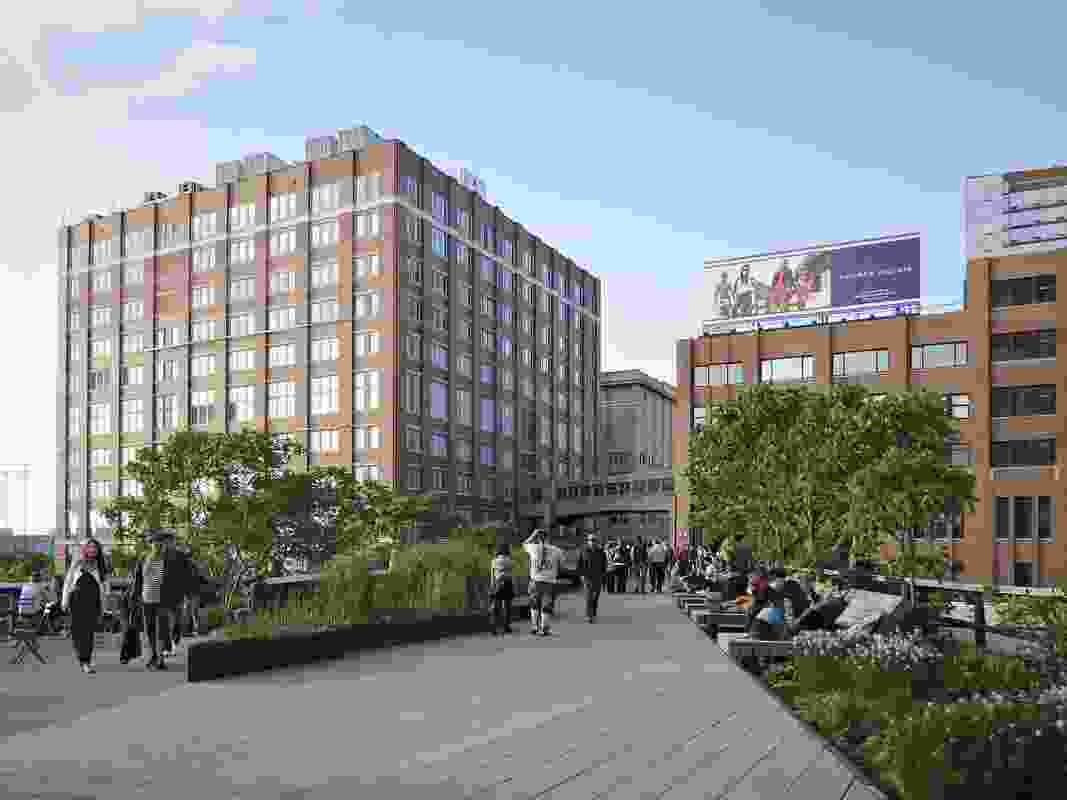 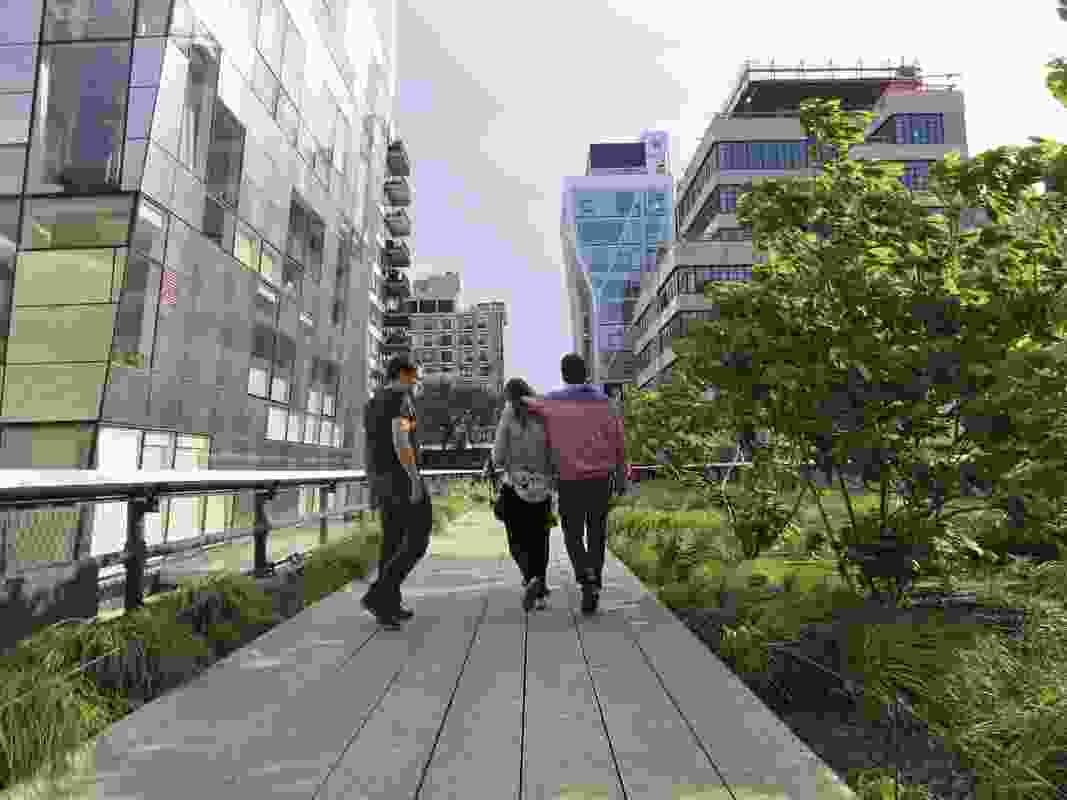 The High Line is a catalyst for urban renewal around it. 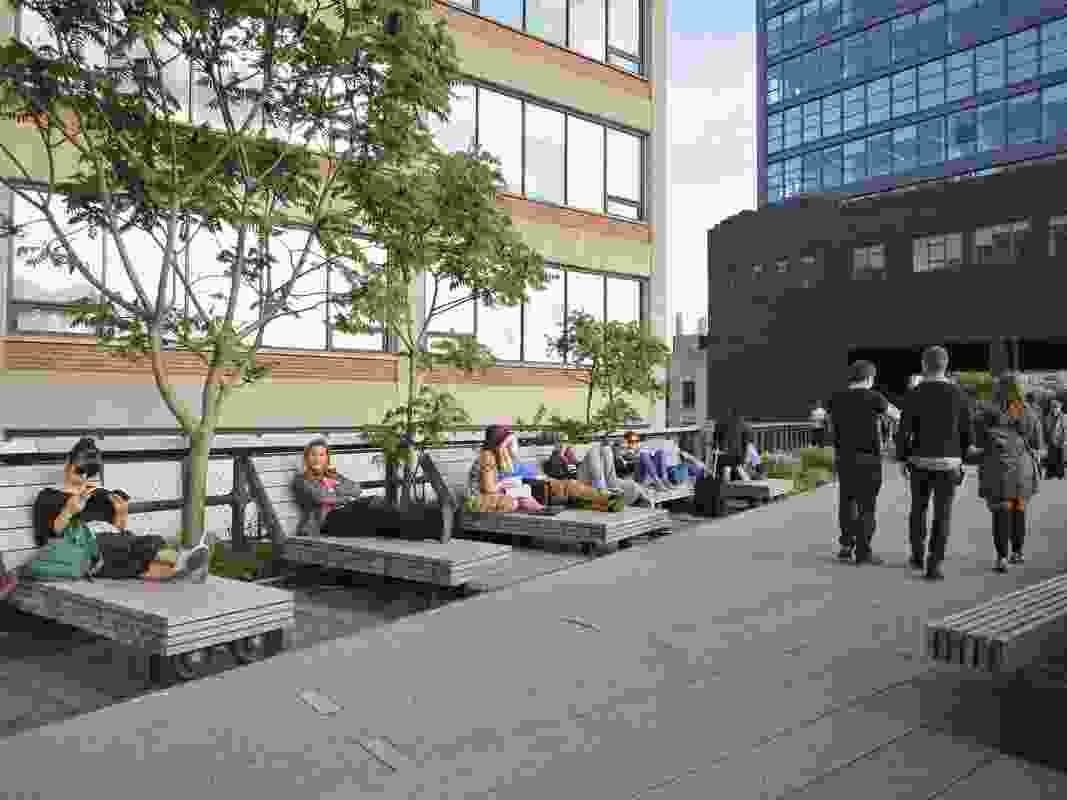 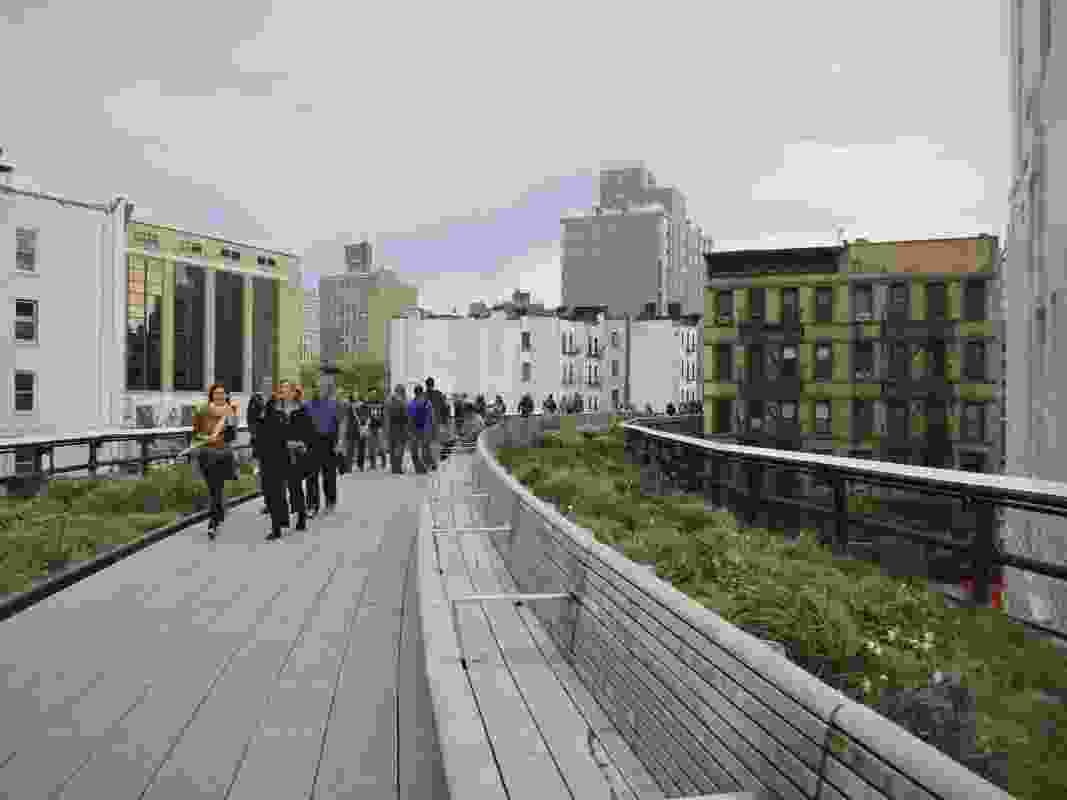 Seating detail on the High Line. 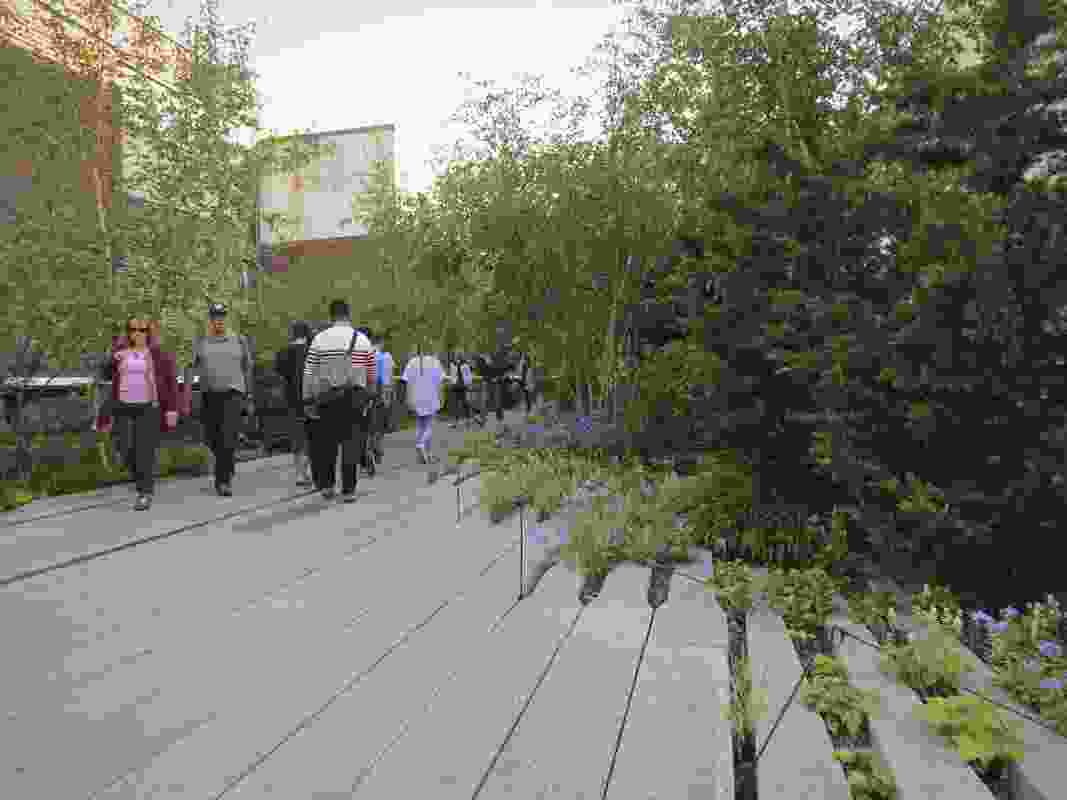 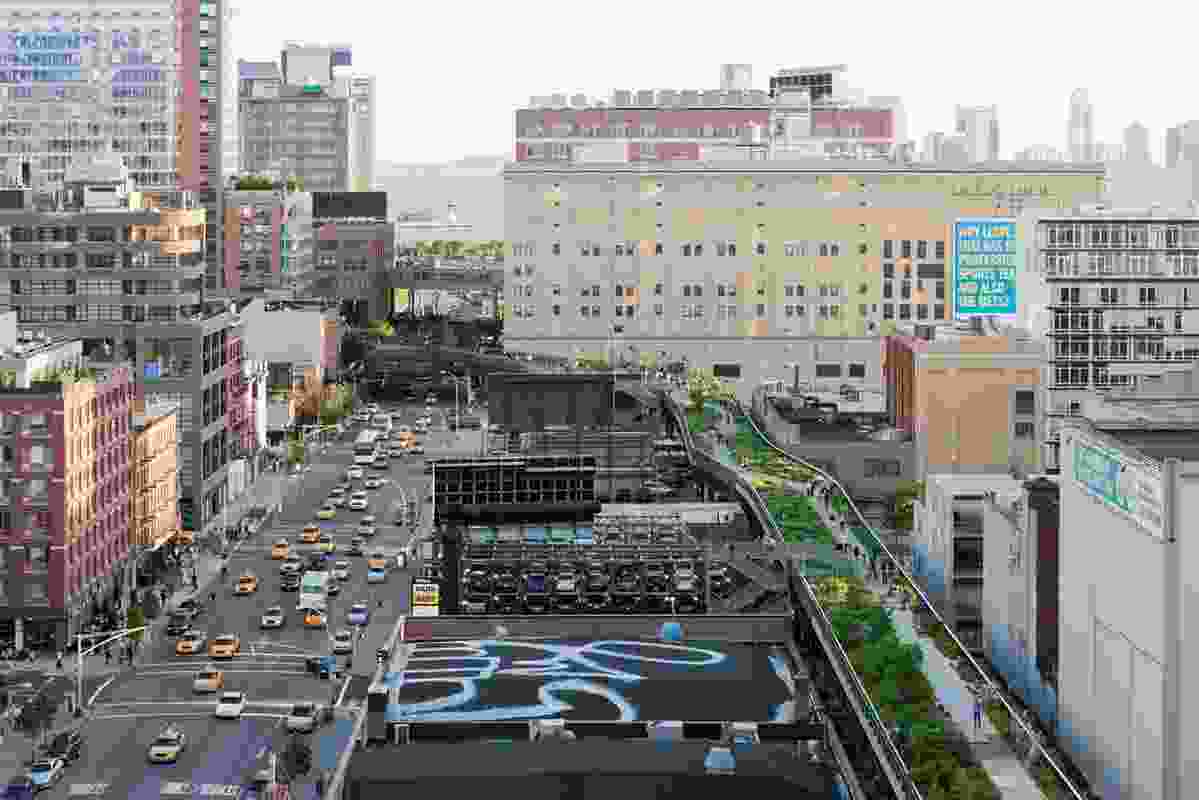 Aerial view of the High Line. 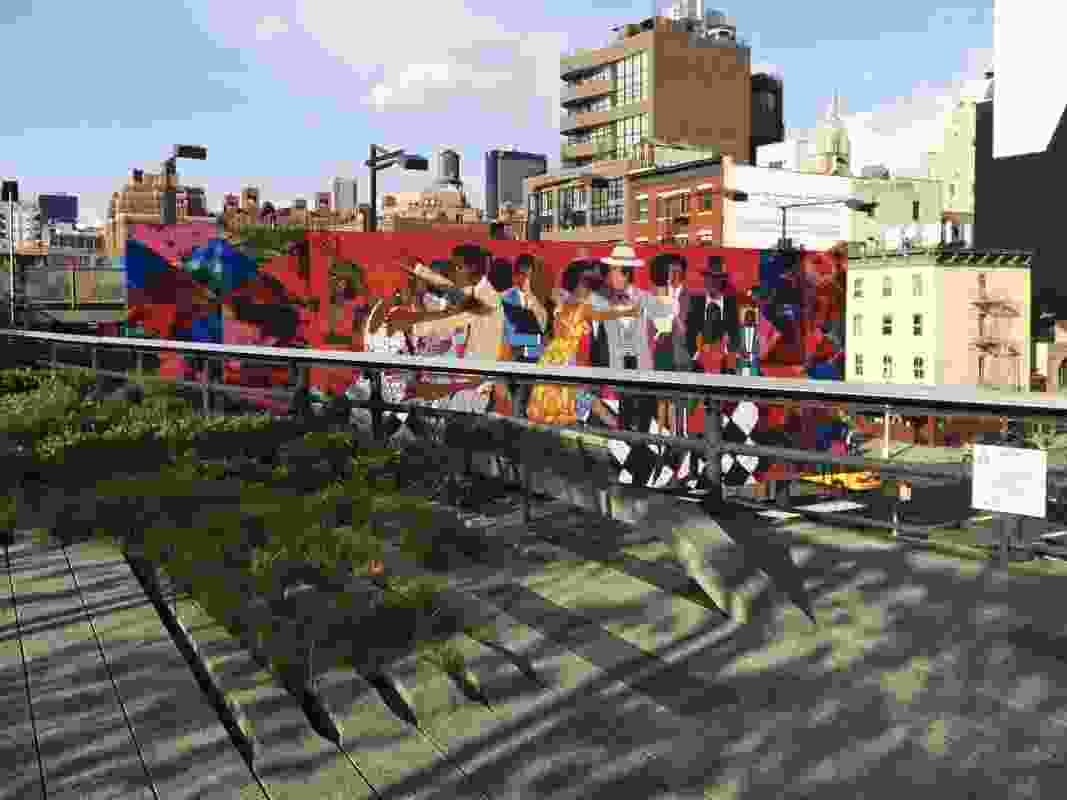 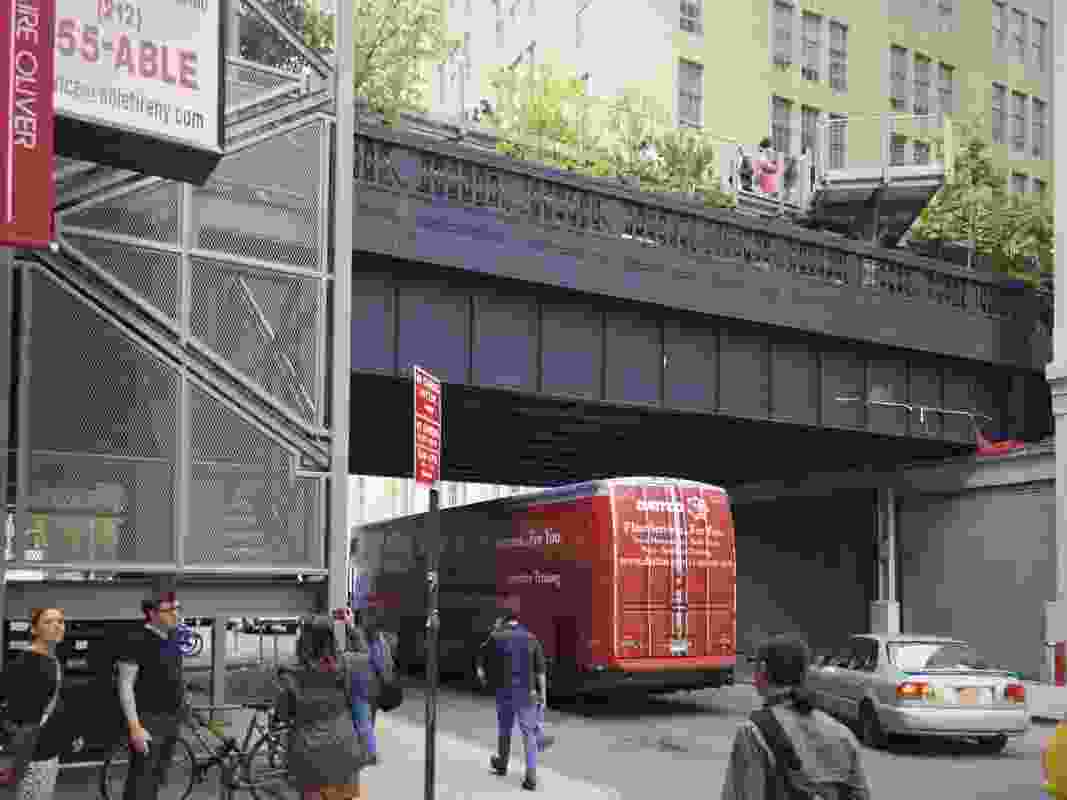 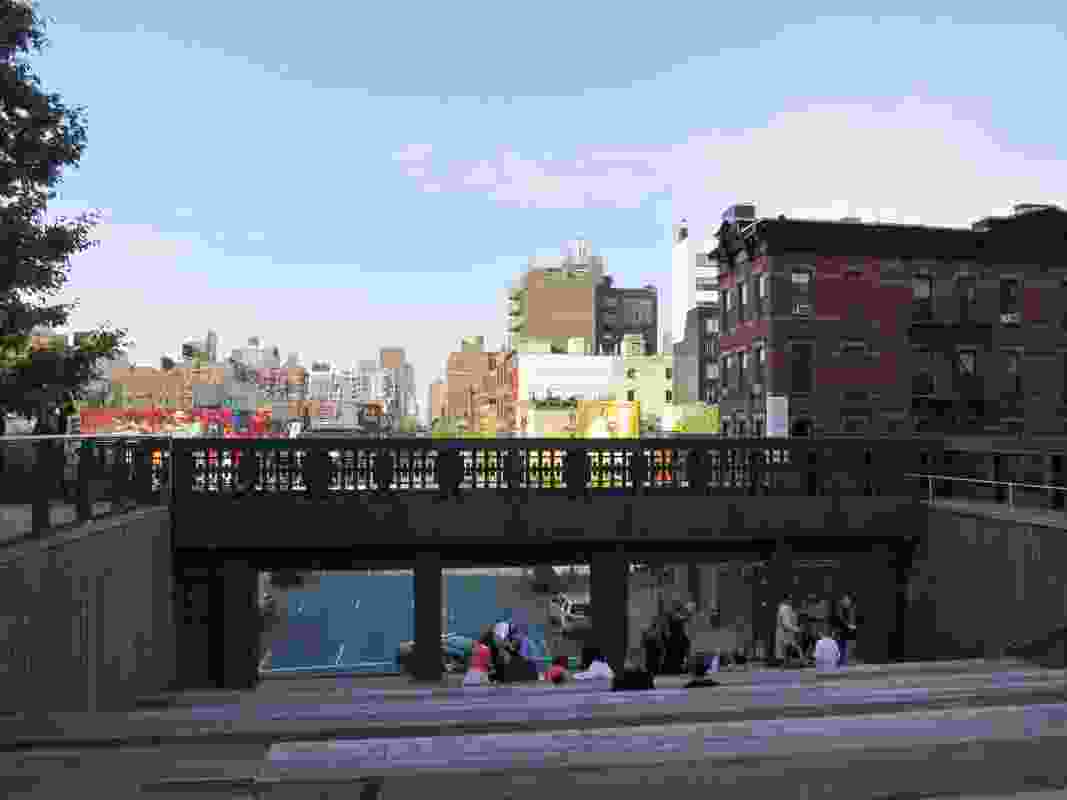 A form of ‘street theatre’ – a sunken amphitheatre in the High Line looks down into the constantly flowing traffic. 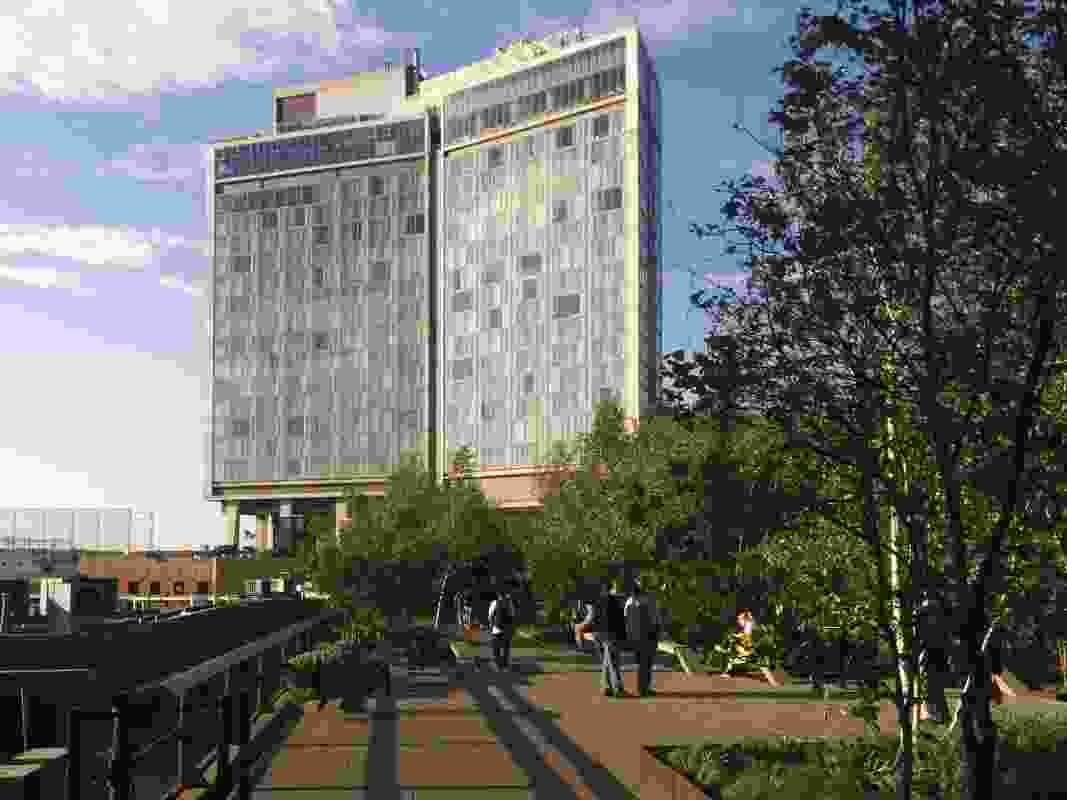 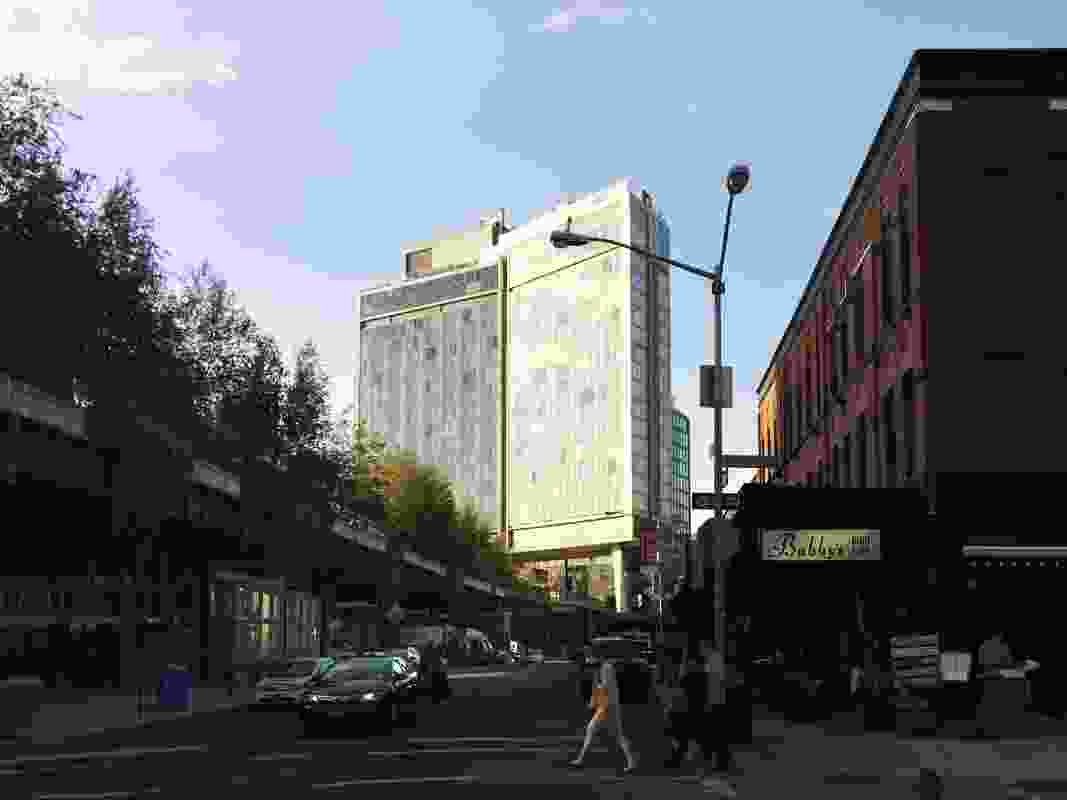 The first section of the High Line which opened in 2009 begins at Gansevoort Street in Manhattan’s West Village. 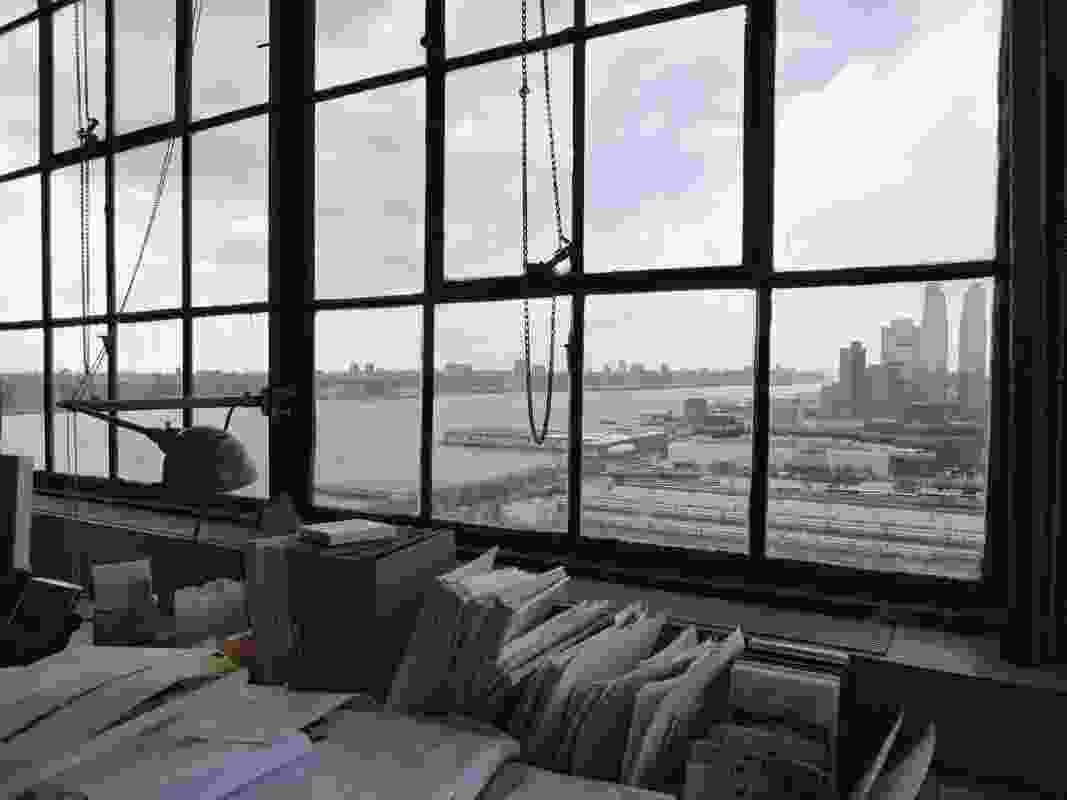 +Pool by Family and Playlab, originally proposed for the East River in Brooklyn. 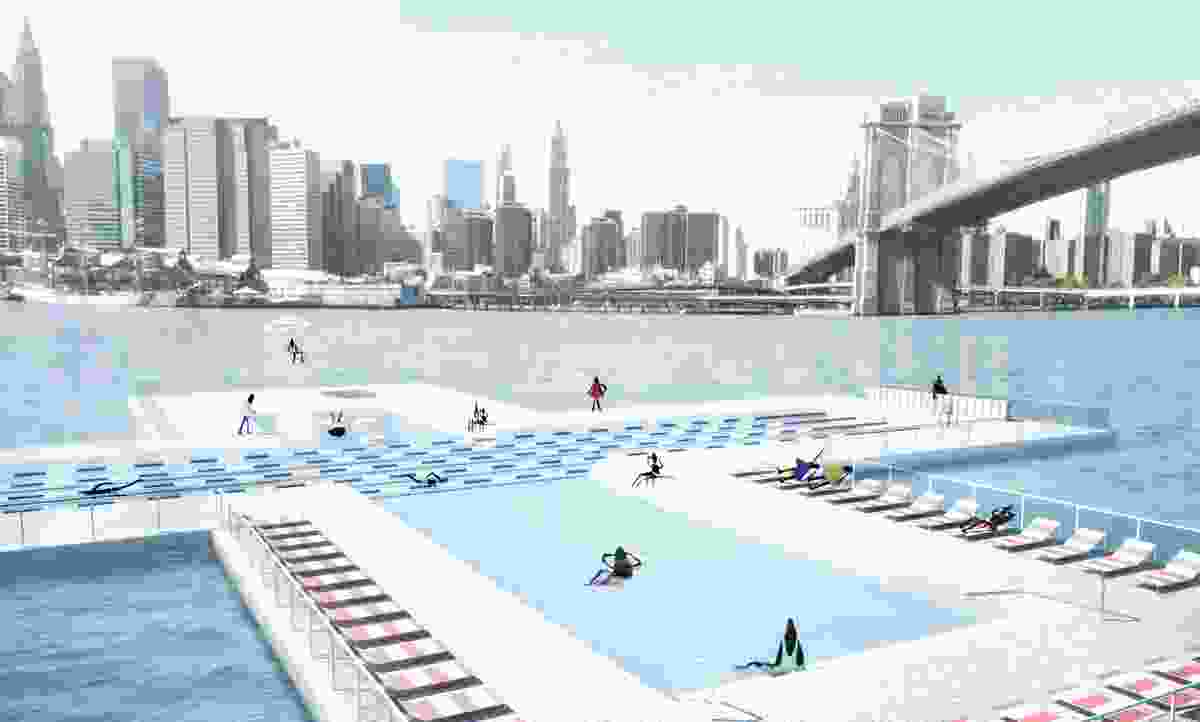 The cruciform +Pool divides into four sections for swimming, sports, lounging and children. 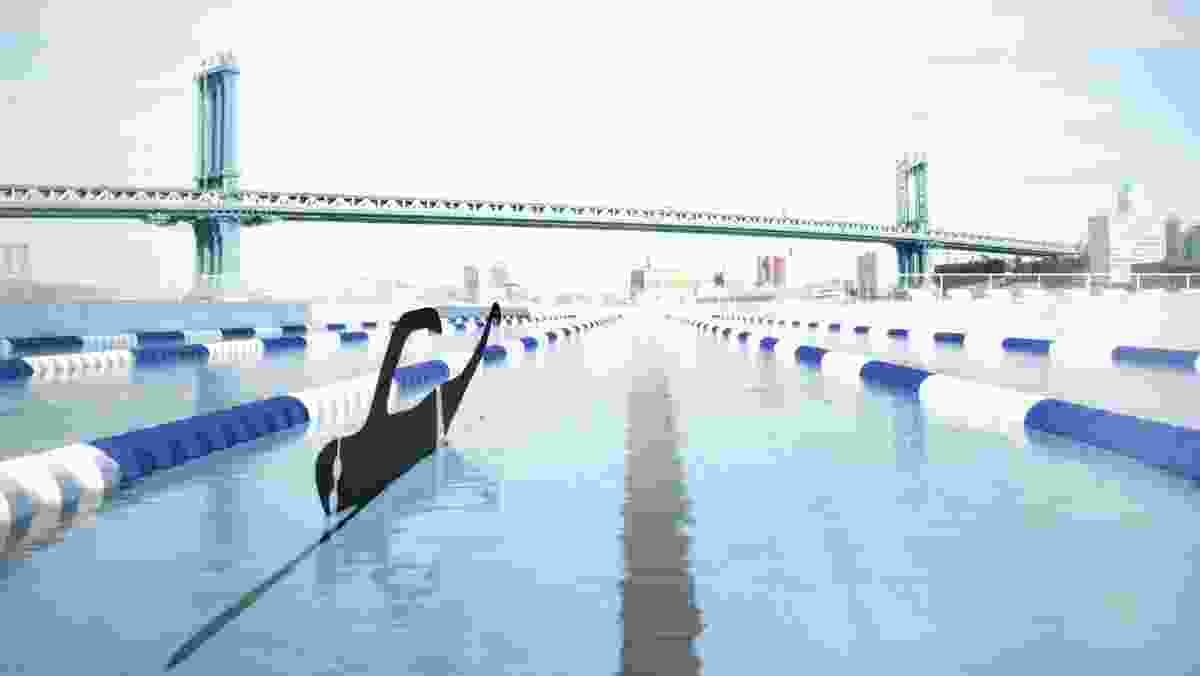 The +Pool uses an innovative filtration system to clean the river water for swimming. 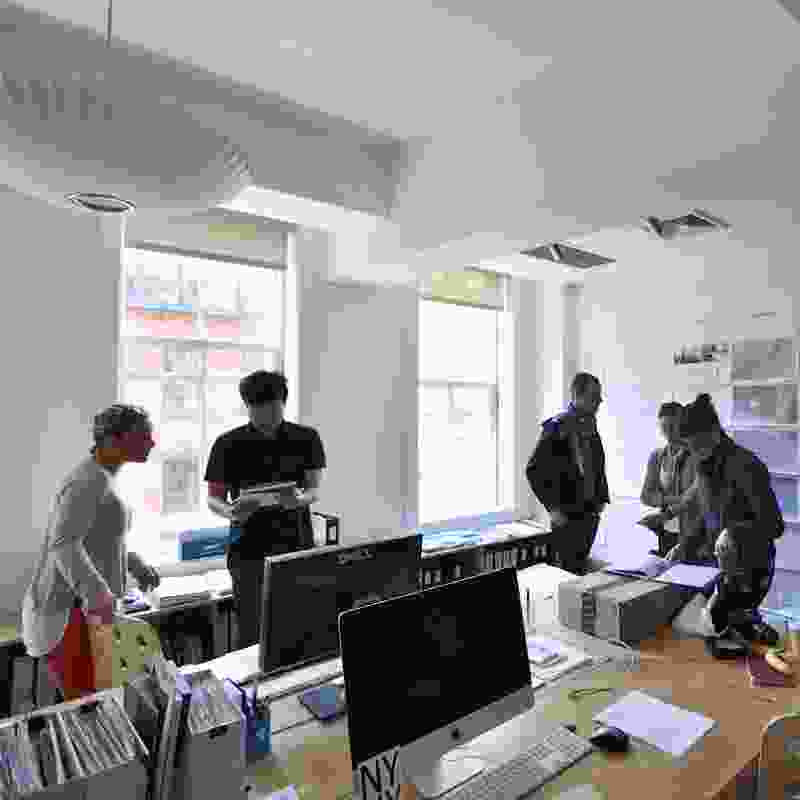 The New York office of Family and Play Lab. 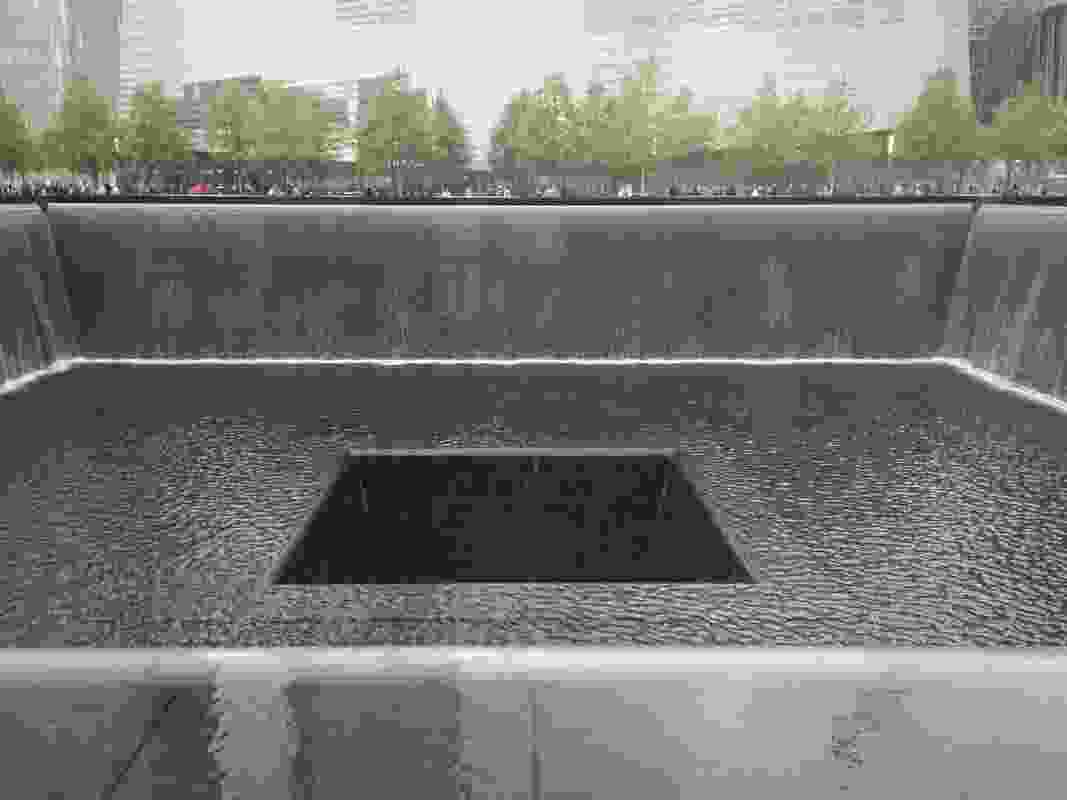 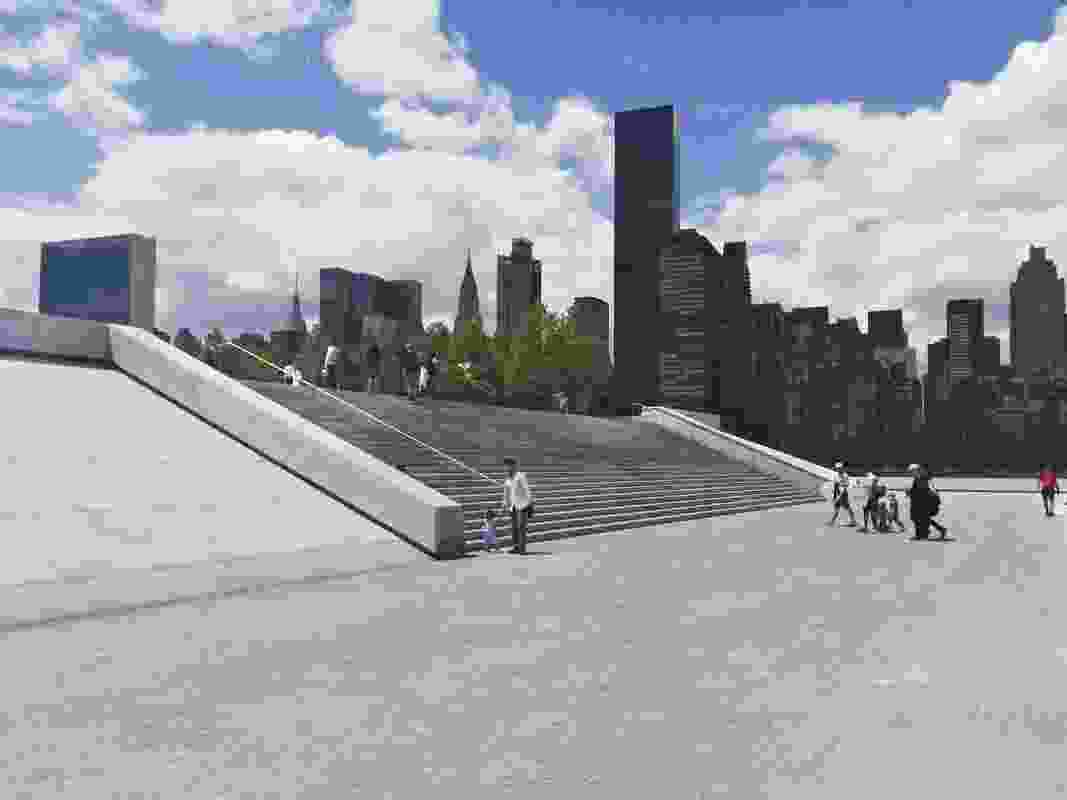 View towards Manhattan from Loius Kahn’s Roosevelt Memorial and Four Freedoms Park, completed in 2010, 38 years after the original project was announced. 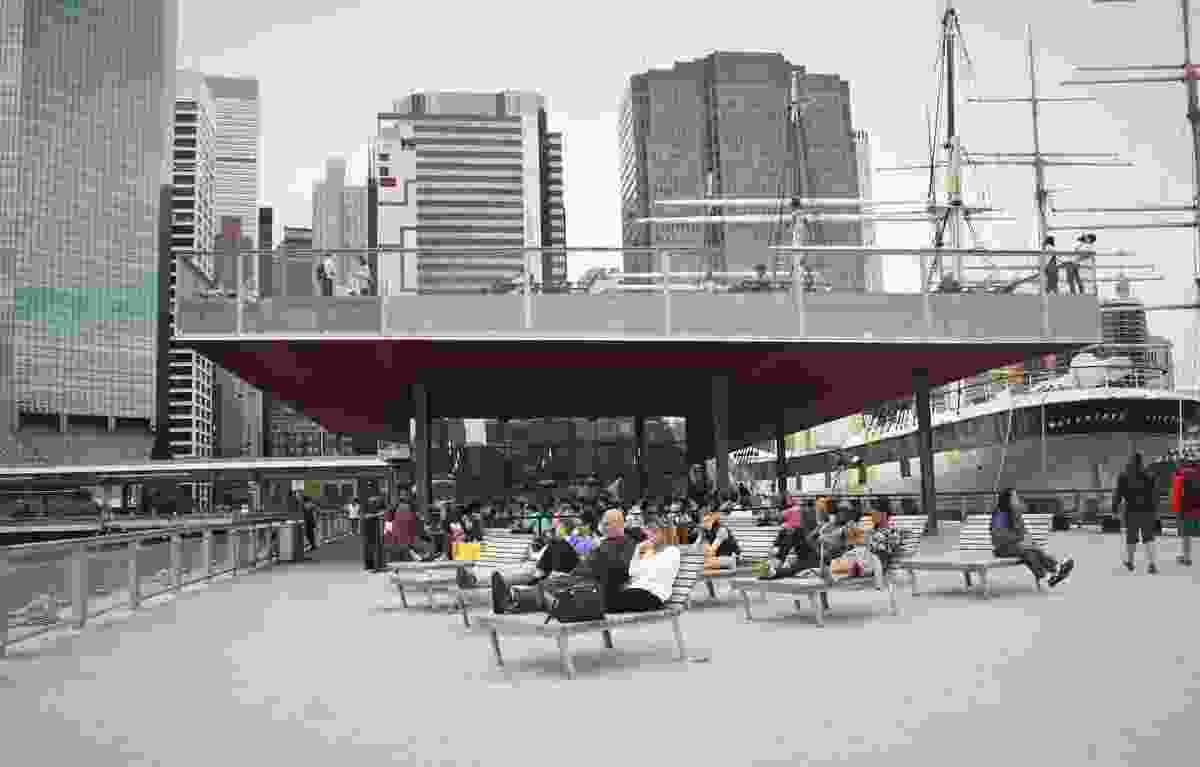 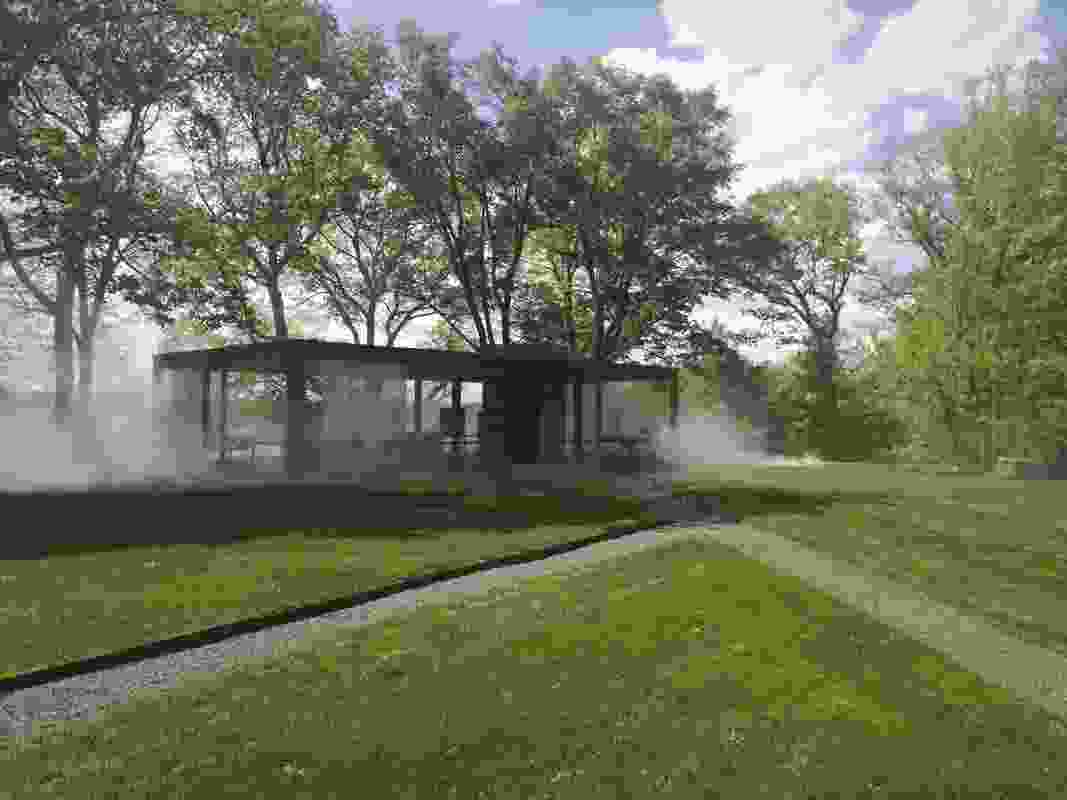