Erected in 1988, The Queens Wharf Tower has long been a source of ridicule.

An observational tower opened by Queen Elizabeth II in 1988 and famed for its form that has amused local residents will be demolished, the City of Newcastle has announced.

The 40.3-metre Queens Wharf Tower, designed by Snell Architects, was built as part of a redevelopment of Newcastle foreshore, the vision of then-Lord Mayor Joy Cummings, who became Australia’s first female lord mayor when she was elected in 1974.

Tract Consultants won a 1981 competition to masterplan the foreshore development with a scheme that included an idea for “a tower on the waterfront podium with stair access to deck level.”

“The design [of the overall scheme] is based on thorough research, sensitivity to the site and an overriding ability to appreciate all components that are Newcastle, like its topography, social fabric, history and economy,” reported Landscape Australia in the February 1982 issue.

“[The tower’s] form is to be reminiscent of overhead gantries used here when the area was part of a railway marshalling yards of coal exports. Ideally a restaurant should be incorporated in the tower structure, as it will provide a superb setting with a commanding view of the waterfront.”

The tower was eventually built as part of a precinct of building that also included a bar, a restaurant and function centre and a ferry terminal.

The Queens Wharf precinct received the Lloyd Rees Award for Urban Design from the Australian Institute of Architects NSW Chapter in 1988.

Architect Kevin Snell told Newcastle Herald the tower was meant to be a temporary, “expo-like” structure to be dismantled after two to five years. He said the tower’s shape was “purely as a result of the most efficient structure.”

“Over the years I’ve got calls … saying what was I thinking building this big dick sticking up out of the city, and I sort of give them a very serious explanation of why it’s shaped like it is.

“An erect penis is an extremely efficient structure. I think they’re taken aback that I state the obvious.”

According to a statement from the Newcastle council, the tower will be demolished because it is a safety hazard, not wheelchair accessible, and no longer a star attraction. It is also expensive, with the estimated cost to maintain the aging structure totalling $1.6 million over the next eight years.

The council also notes that the tower is the subject of “lewd jokes and negative reports,” and that it is “definitely not an appropriate reminder to the city of the Queen’s visit in 1988.”

“There really is no other way to describe the Queens Wharf Tower other than as an embarrassment to the City,” he said.

“I look forward to not having to answer the inevitable question of ‘why’ from guests and visitors when they first see the Tower.”

While the tower does have its defenders, it has long been subject to calls for its demolition.

Paul Scott, a lecturer at the University of Newcastle’s School of Design, Communication and Information Technology, who described the tower as a “phallocentric reminder of the ‘build it and they will come’ approach,” in the Newcastle Herald in 2015 welcomed the decision to demolish.

“The revitalization of our city has required a great deal of change and breaks from the past,” he told ArchitectureAU. “The Queens Wharf Tower has long-outstayed its welcome and makes us a laughing stock as being such a blokey city that we put this monstrosity in a high profile location lest visitors and locals thought the city’s social structures were anything other than blokey.”

“[Demolishing the tower] is about junking the result of a bad idea implemented by a well-meaning committee as a metaphorical bow to a royal visit.

“It was never practical, always ugly, excluded those who could not manage 180 steps and costs a motza to properly maintain. Good riddance.”

The tower will remain open for six months and be demolished in late 2018 or early 2019. The council will be seeking feedback from the community to determine how the space should be used once the tower has been removed. 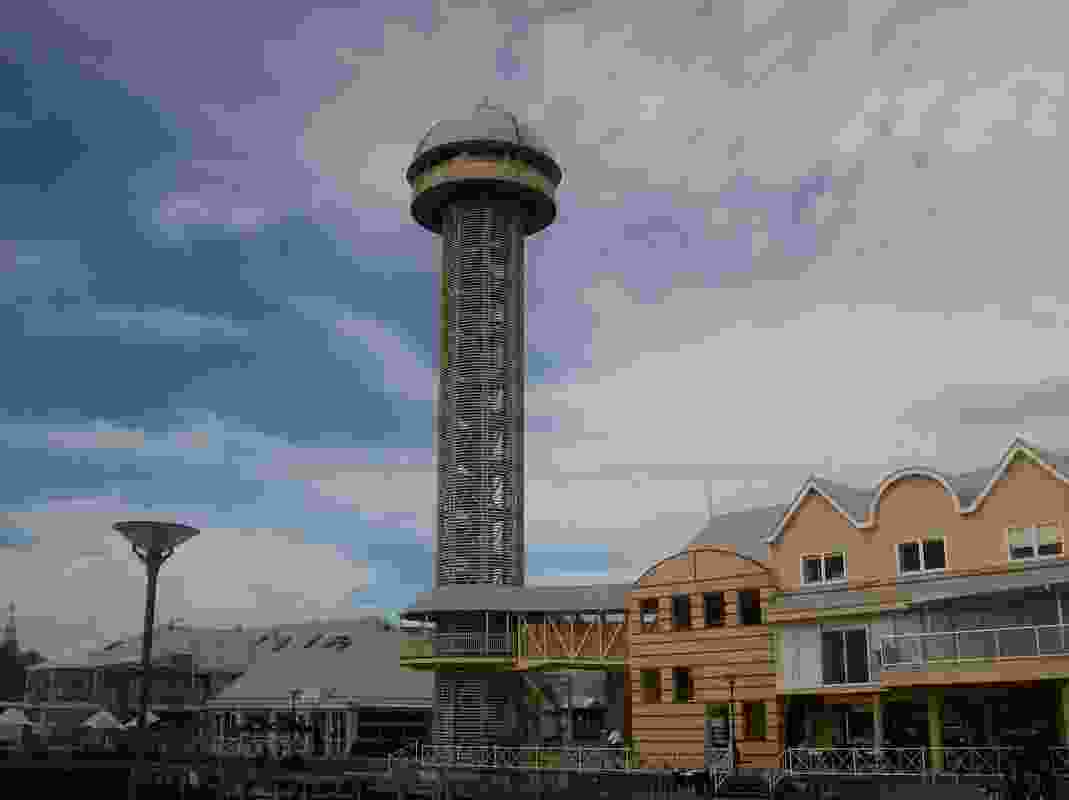 Erected in 1988, The Queens Wharf Tower has long been a source of ridicule. 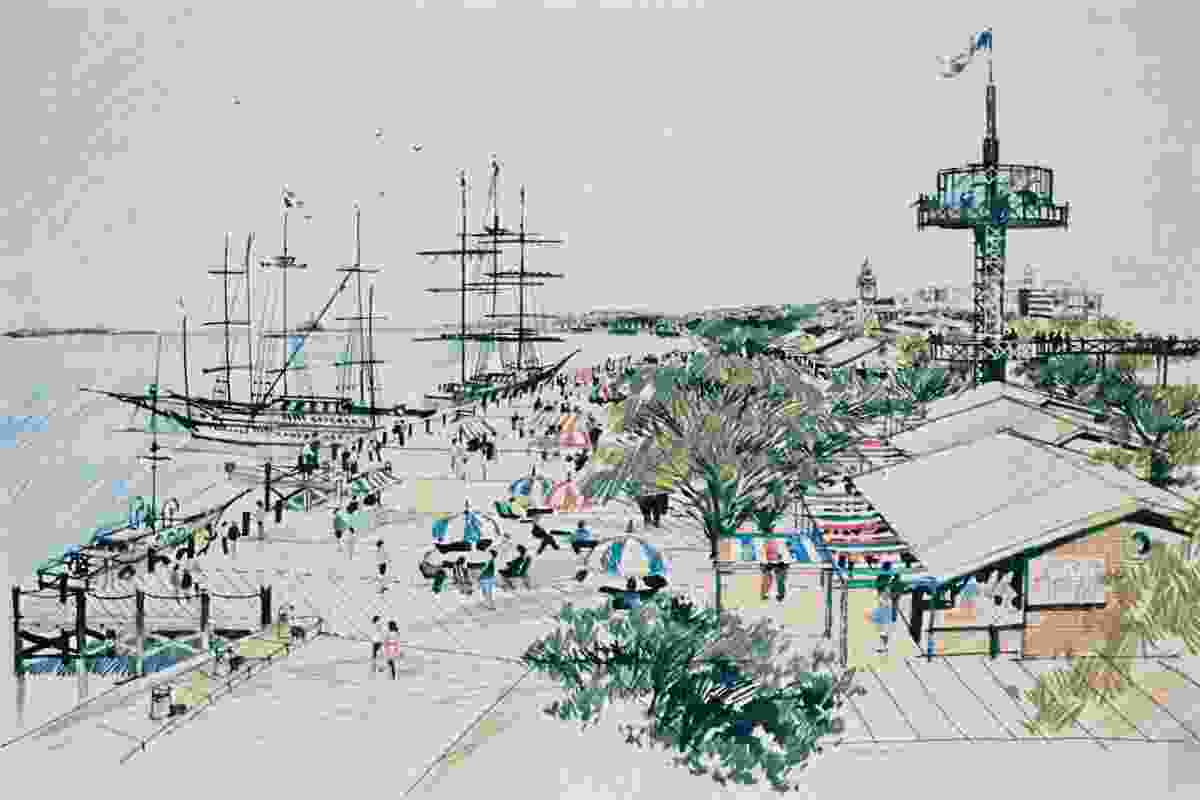 Tract Consultants won a 1981 competition to masterplan the foreshore development. 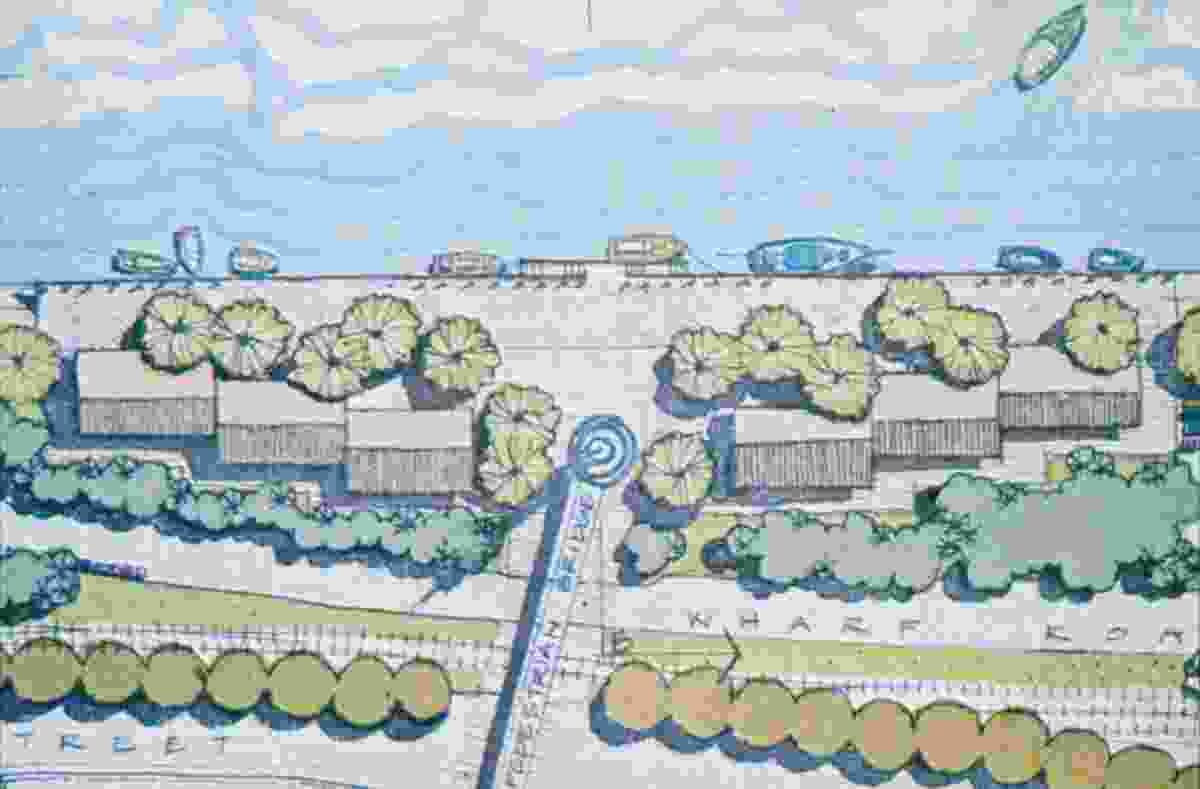 A sceme for Newcastle’s foreshore by Tract Consultants.