Kaupapa designs by students at Nga-Purapura.

Full disclosure, point one: I am not Maori. I am Pakeha, which means my identity is inscribed by a treaty-determined partnership with the New Zealand indigenous people of Aotearoa. Indeed, so Pakeha am I that by the end of a bright summer’s day my legs are so blindingly red, people try to swim between them at the beach: Maori people and Pakeha people.

Full disclosure, point two: I am a secular humanist. That means I like to think of myself as open-minded and empathetic toward the rich diversity of human life I see through the locked doors of my European turbo-diesel station wagon.

So, I am a secular humanist Pakeha which, for the most part, is jolly good fun. I enjoy watching kapa haka on Maori Television and the Warriors on other television channels. I can’t speak ‘te reo’ (although I am quite certain I want to learn one day) and I try to be the first to text an enlightened opinion in response to the appalling views I hear expressed on my favourite talkback radio programme.

But, I find, there are situations when being a secular humanist Pakeha is also a bit uncomfortable. The town of Otaki is one such situation although, thoughtfully, Otaki is actually three places. The first Otaki strangles State Highway One with outlet stores promoting cheapish merino clothing. The third Otaki is on the Kapiti beach and provides welcome respite from the hellish trials of buying cheapish merino clothing. Between the two is the real Otaki, the one almost called Hadfield Town after the particularly zealous missionary who convinced members of Ngati Raukawa to leave their “unhealthy” coastal pa (Mauri village) and start over again as inland Christians.

The magnificent centrepiece to this Otaki is the “Maori Cathedral” of Rangiatea. Dating to the actions of Hadfield and Te Rauparaha, in the late 1840s, Rangiatea today is an accurate reconstruction of the original destroyed by fire in 1995. Visitors can still experience the architectural epiphany of entering a familiar looking church and encountering an interior unmistakably Maori in its ornamentation, organization, and construction. Or so I am told. Unfortunately the secular Pakeha in me, while being utterly fascinated by Rangiatea, is terrified that, if I ever experienced it personally, I might leave an Anglican Maori.

Yet, curiously, I felt no such anxiety approaching the just-as-indigenous Nga Purapura, the new Wananga of Fitness facility for Te Wananga o Raukawa, which is well within my short-sighted view (literally) of Rangiatea. Nga Purapura presented a particularly challenging brief to actualise a holistic vision of Maori health. This paradigm – Te Whare Tapa wha – is conceptualized as a four-sided house in which each wall represents a facet of health: spiritual, mental, physical and social (whanau). In practice this defined a complex programme incorporating a wide range of requirements (including two internationally compliant netball courts) and looks quite a bit more sophisticated than a four-sided house.

For those driving quickly from Otaki 1 to Otaki 3, the building reveals itself as a series of escalating lean-to sheds languishing against a big concrete box. If pushed to identify some “Maori” architecture here, I can perhaps discern, in the triangulated shade canopies the same abstracted chevrons architecture + used for Te Wharewaka o Poneke. The big box things are both more obvious (the addition of Maori iconography) and more obscure (is that a shadow of John Scott’s Maori Battalion Building I see in that tough exterior?). But overall the encounter is reassuringly modern and familiar, right down to the landscaping by Wraight + Associates which carefully retrieves from colonial forgetfulness the history of this piece of land as, for the greater part, water.

Nga Purapura is, then, a far more approachable architecture than is Rangiatea and, when one moves inside, the seduction continues. To the credit of the architects, they never retreated into institutional complacency. Overall, the spaces feel like a particularly generous and thoughtful house and, without recourse to simplified illustrations, Tennent + Brown have realized the metaphorical essence of Te Whare Tapa wha.

There are examples of “readable” Maori-ness in the building – the tensile trusses supporting the sports-court roof are a hoe or paddle derivation, and the stepped acoustic panels mimic the poutama tukutuku design, climbing for knowledge. But what I found most rewarding are the more mundane “tricks” of architecture as they are applied here: clever lines of sight that link internal and external communities, a simple material palette given careful construction attention, light and volume that provide pleasurable spaces throughout, and so on. Clever, simple pleasures abound.

The most inspirational moment is the atrium “pod.” From the outside it presents perfectly a large seed whose form was taken from a proverb: “I will never be lost, the seed which was sown from Rangiatea”: not the nearby church but an ancient Rangiatea found in Hawaiki and to which the latter owes its name. The architects have realised the metaphorical potential in this concept beautifully. The outside of this inside building has an elegance that would be lost on a structure that required gutters. Entering the seed offers transcendental calm of disconcerting scale, seemingly both bigger and smaller than it should be. It is the “non-functional” heart of a most serious endeavour and, in presenting no determined role, it fulfils many needs perfectly. 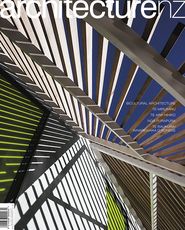 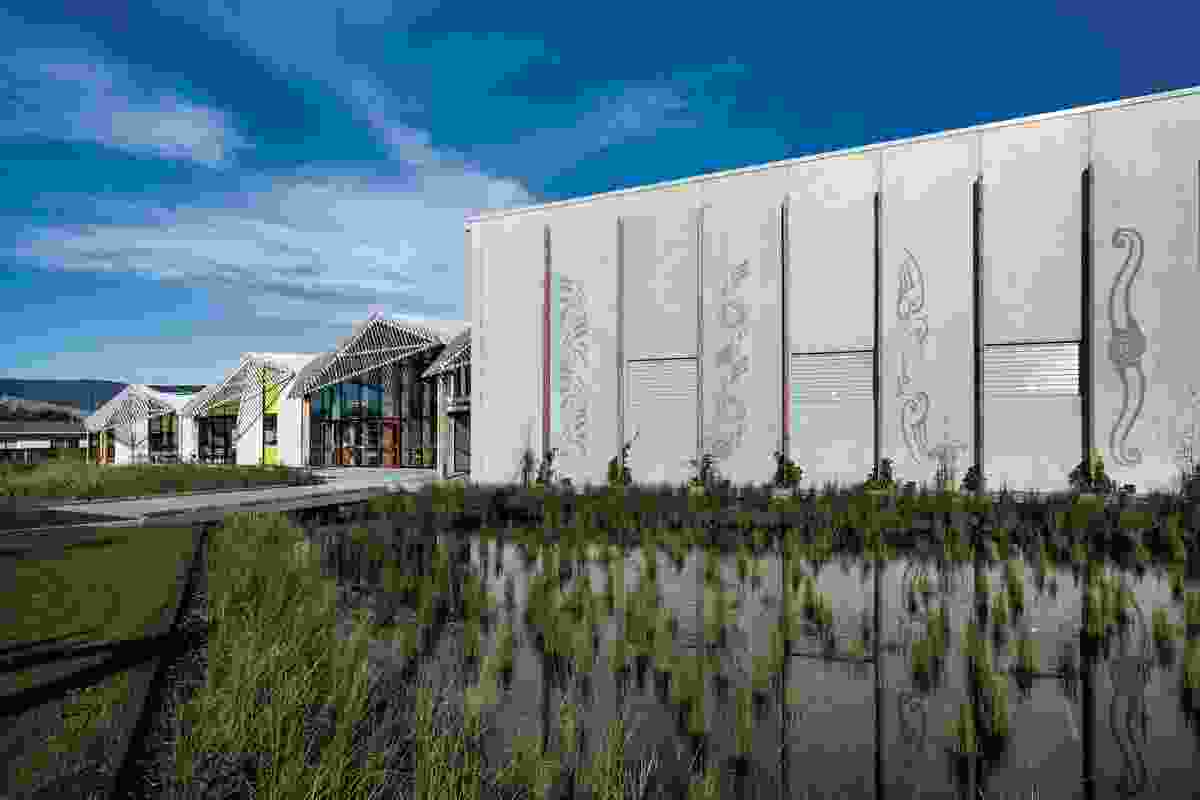 Kaupapa designs by students at Nga-Purapura. 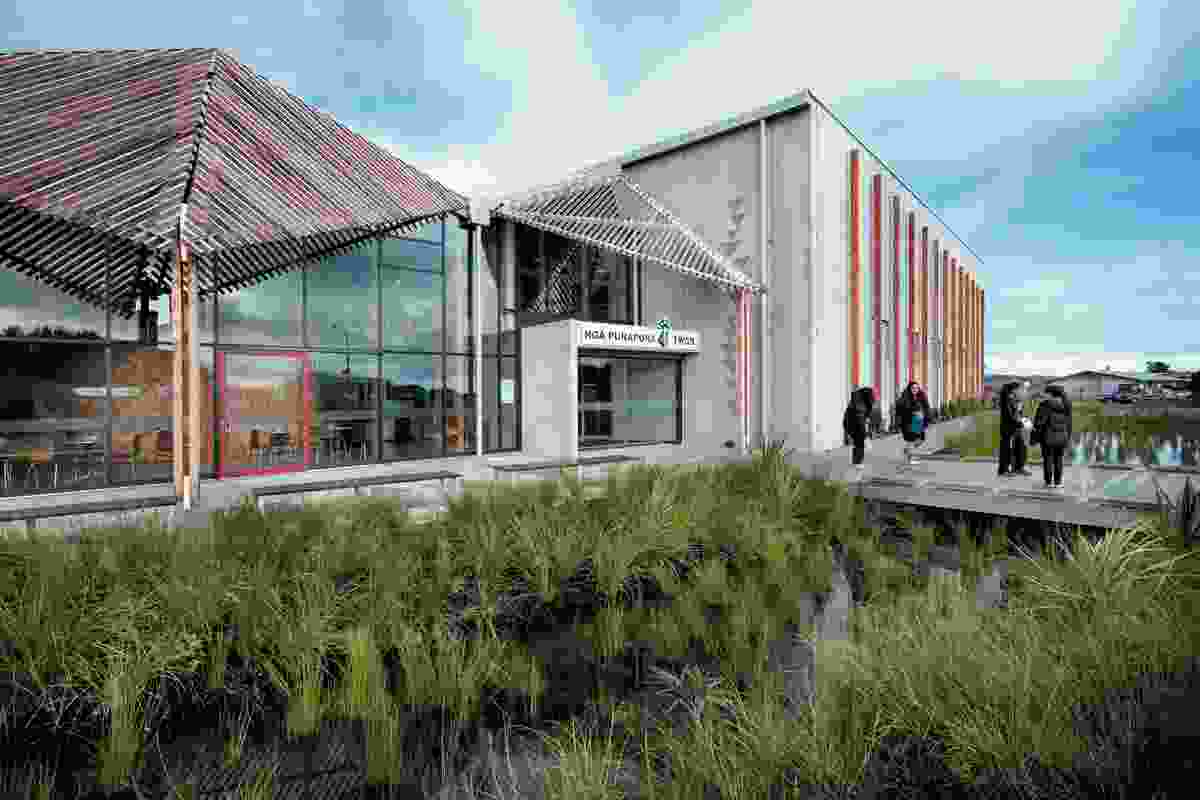 The main entrance is entered via a moat. 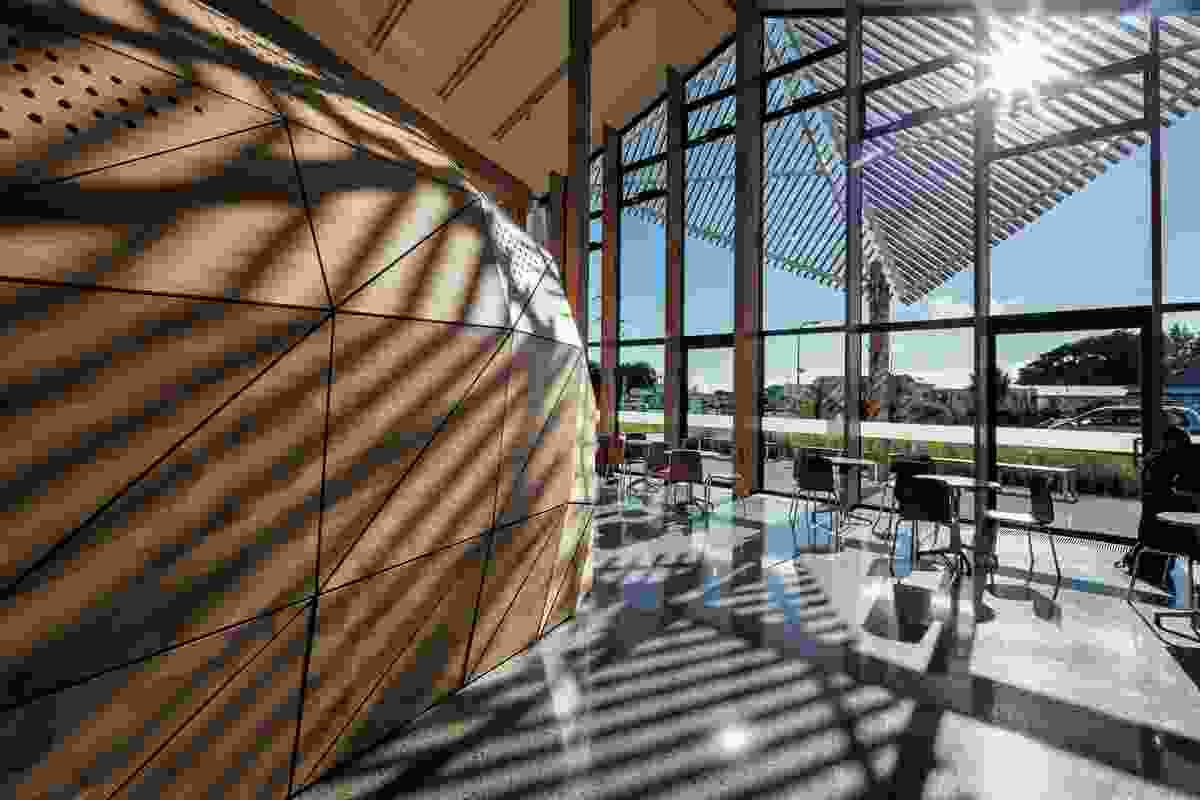 The large seed form refers to a proverb: “I will never be lost, the seed which was sown from Rangiatea.” 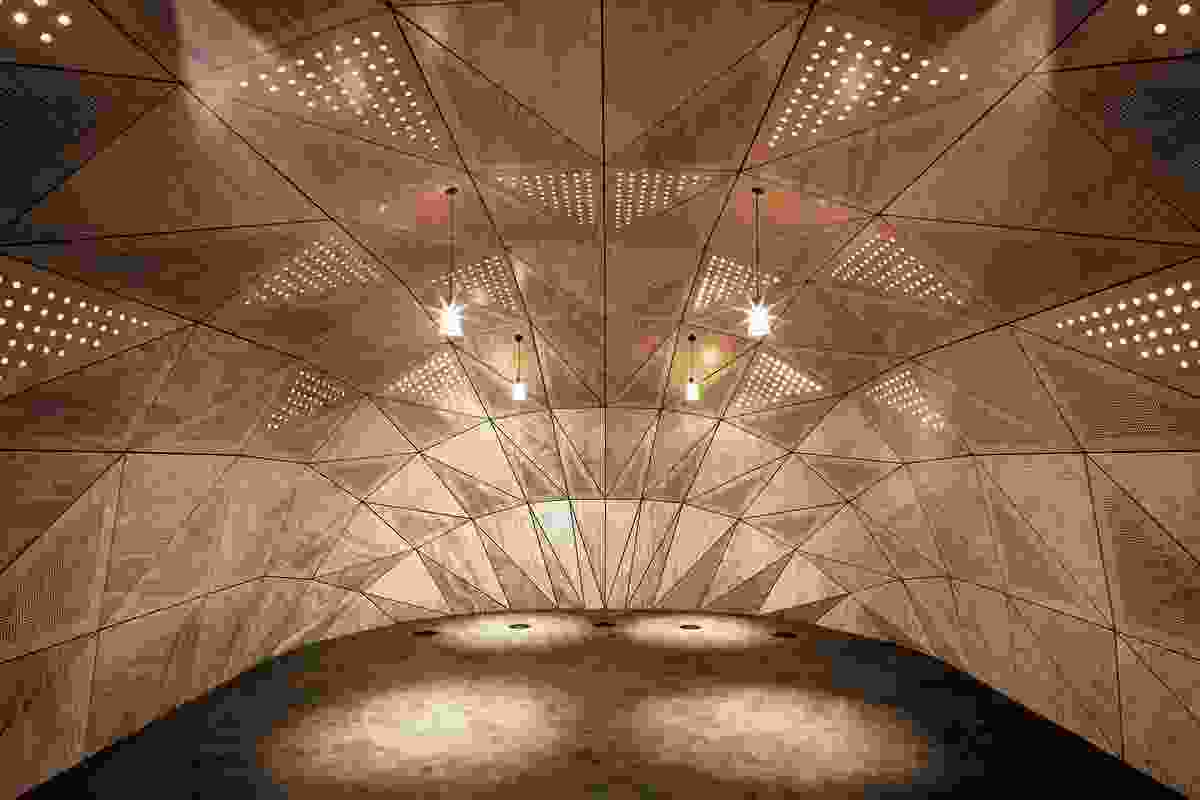 “Transcendental calm” inside the atrium ‘pod’. 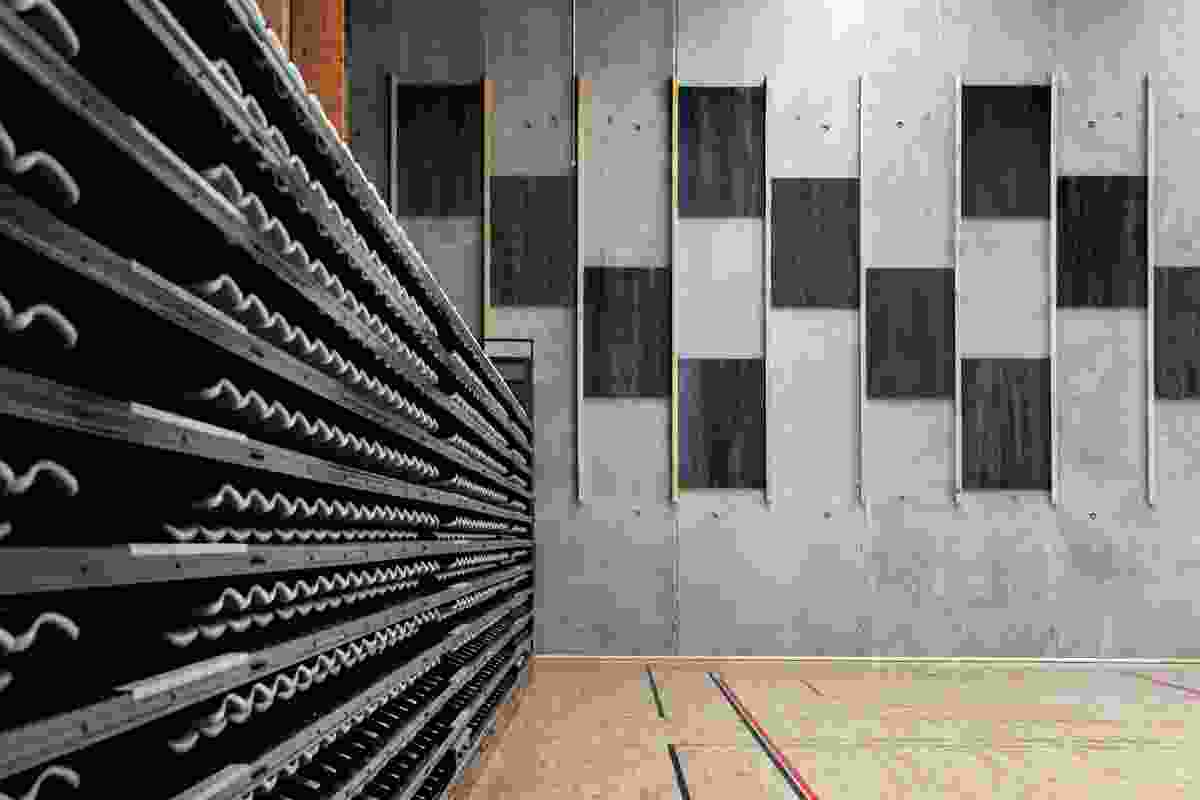 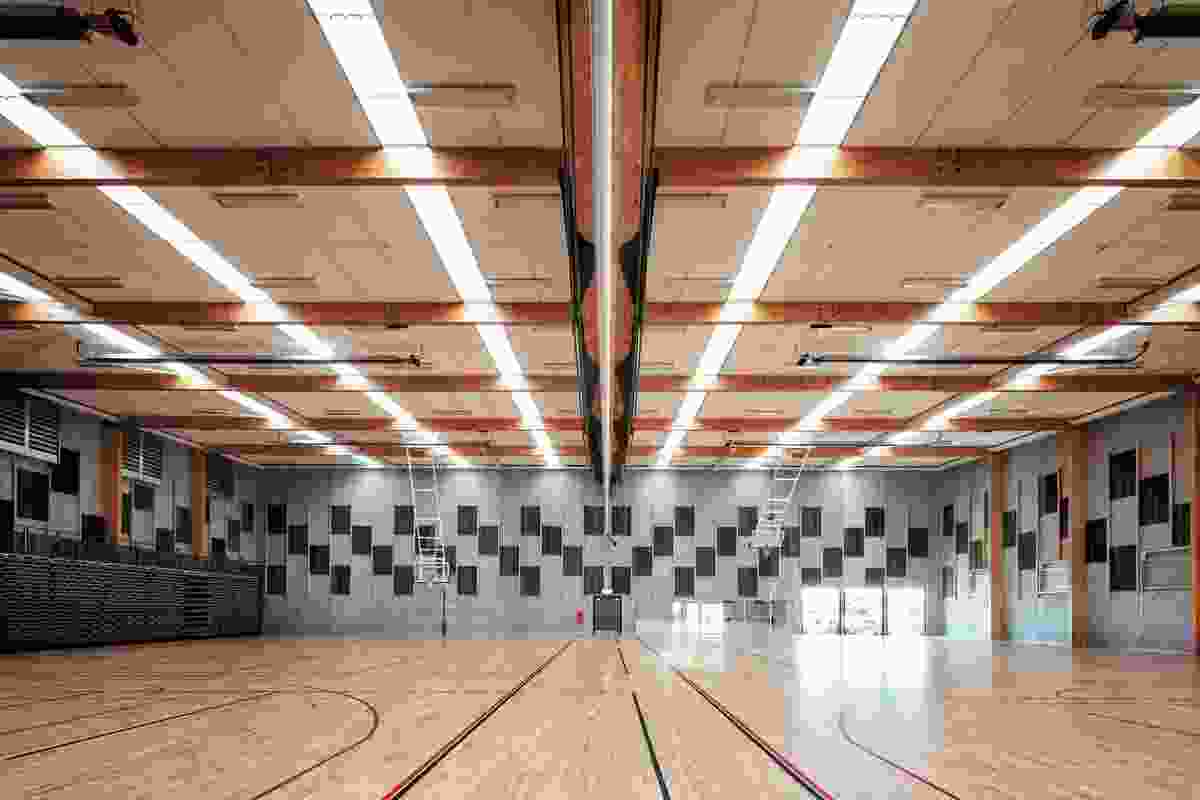 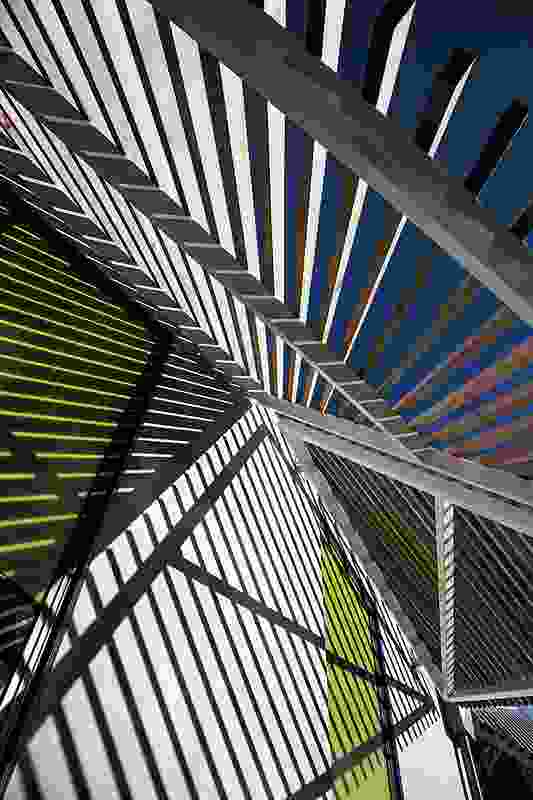 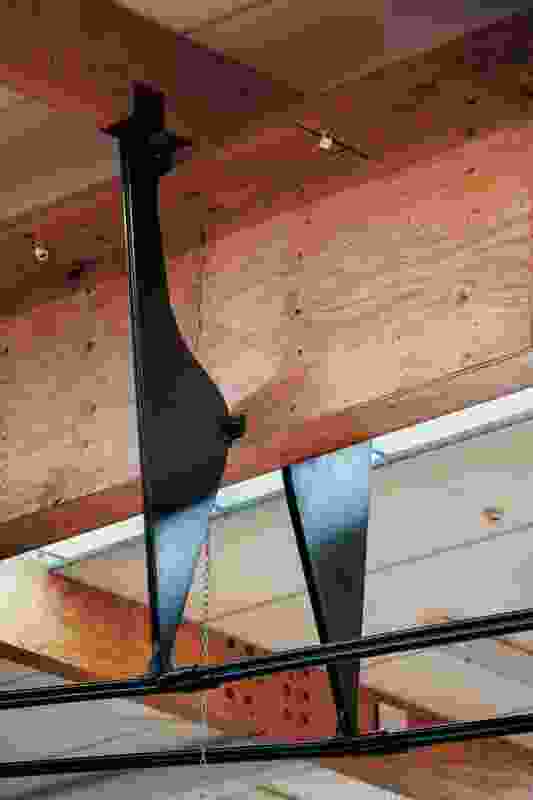 The tensile trusses are a hoe or paddle derivation.