An Olympic-sized ice rink in Western Sydney has been saved from demolition. NSW heritage minister Gabrielle Upton placed an interim heritage order on the Macquarie Ice Rink on Saturday 2 February, the day after the developer AMP Capital said its planned redevelopment of the Macquarie Shopping Centre would include an Olympic-sized rink.

A development application was submitted to City of Ryde council in late 2018 for a redevelopment of the shopping centre to be designed by NH Architecture and Hames Sharley. Those plans included the demolition of the ice rink as well as provisions for 21,258 square metres of additional gross floor area, 481 additional car parks and landscaping and public domain improvements.

The redevelopment plans sparked a furore among the local community. A campaign was launched to save the rink, with petitions against its demolition attracting more than 60,000 signatures. Skaters including Olympic medallist Steven Bradbury spoke out, and local MP and NSW finance minister Victor Dominello made representations on behalf of the community.

Following the backlash, AMP Capital asked the council to pause its development application for the shopping centre in late January.

On Friday 1 February, the company announced the future redevelopment plans would “include a solution for an Olympic-sized rink.”

AMP Capital managing director Mark Kirkland said, “We have listened to community feedback [and] their outpouring of support shows us they are passionate about retaining an Olympic-sized facility.

The subsequent placement of an interim heritage order on the facility means AMP will need to seek permission from the Heritage Council before doing anything in relation to the rink.

The design for the shopping centre was inspired by headlands, promontories and cliff faces of the landscape of the Sydney Basin, according to an urban design report prepared by NH Architecture and Hames Sharley, together with McGregor Coxall and Urbis.

“The façades slope up from the plaza to soften the built form and increase solar access to the public space,” states the report. “The shapes of the building volumes reference the irregular geometries of boulders and sandstone cliffs, while the proximity of the Lane Cove National Park and Lane Cove River gorge informs the building’s spatiality, landscape concepts and material palettes.

“As landmark it will be the ‘jewel in the crown’ for Macquarie Town Centre, and an enduring icon in a rapidly evolving changing urban context.”

The only Olympic-sized ice rink in Sydney, the Macquarie Ice Rink opened in 1981. It is used for ice skating, ice dance, speed skating and ice hockey. The rink is the first winter sports venue to receive interim heritage protection in New South Wales.

An earlier application, for stage one of the redevelopment, was approved in 2016. Designed by NH Architecture and Allen Jack and Cottier, stage one included four residential towers ranging from 26 to 33 storeys. 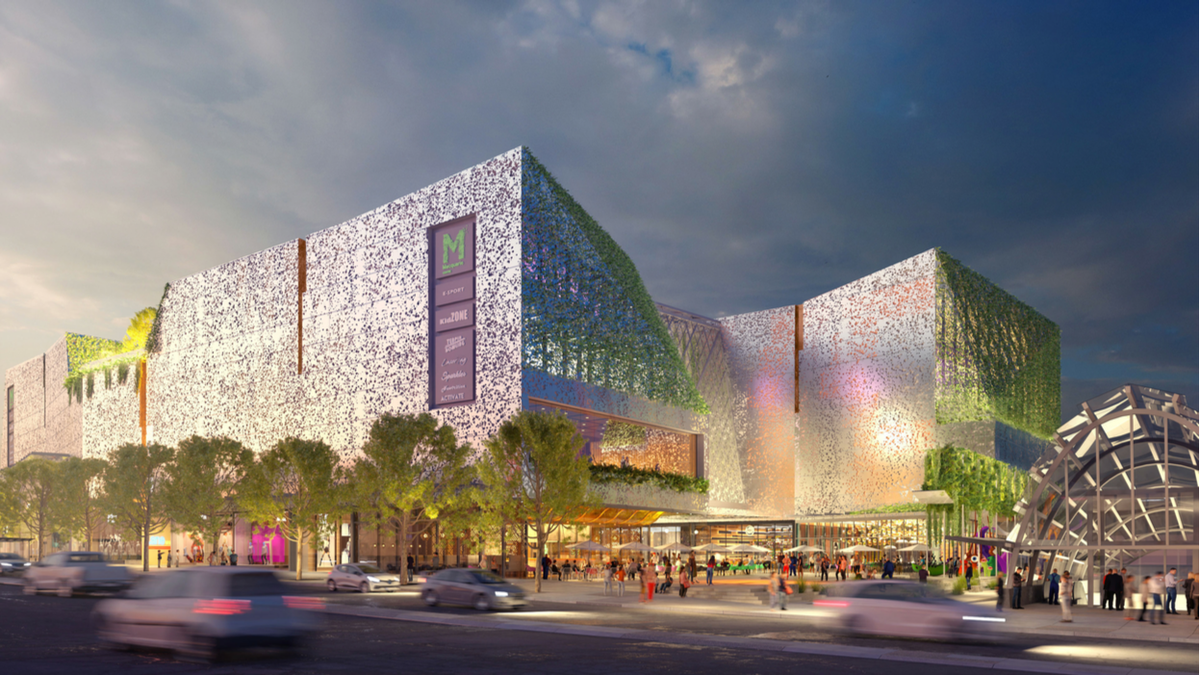 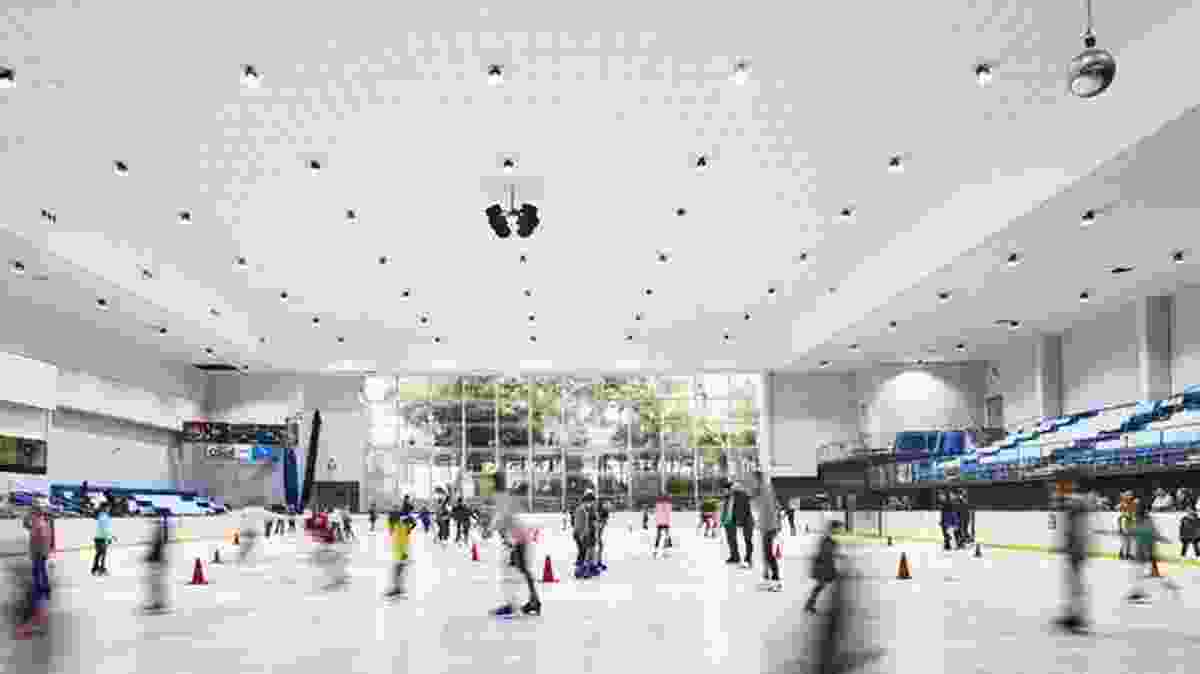 Macquarie Ice Rink in Western Sydney has been saved from demolition. 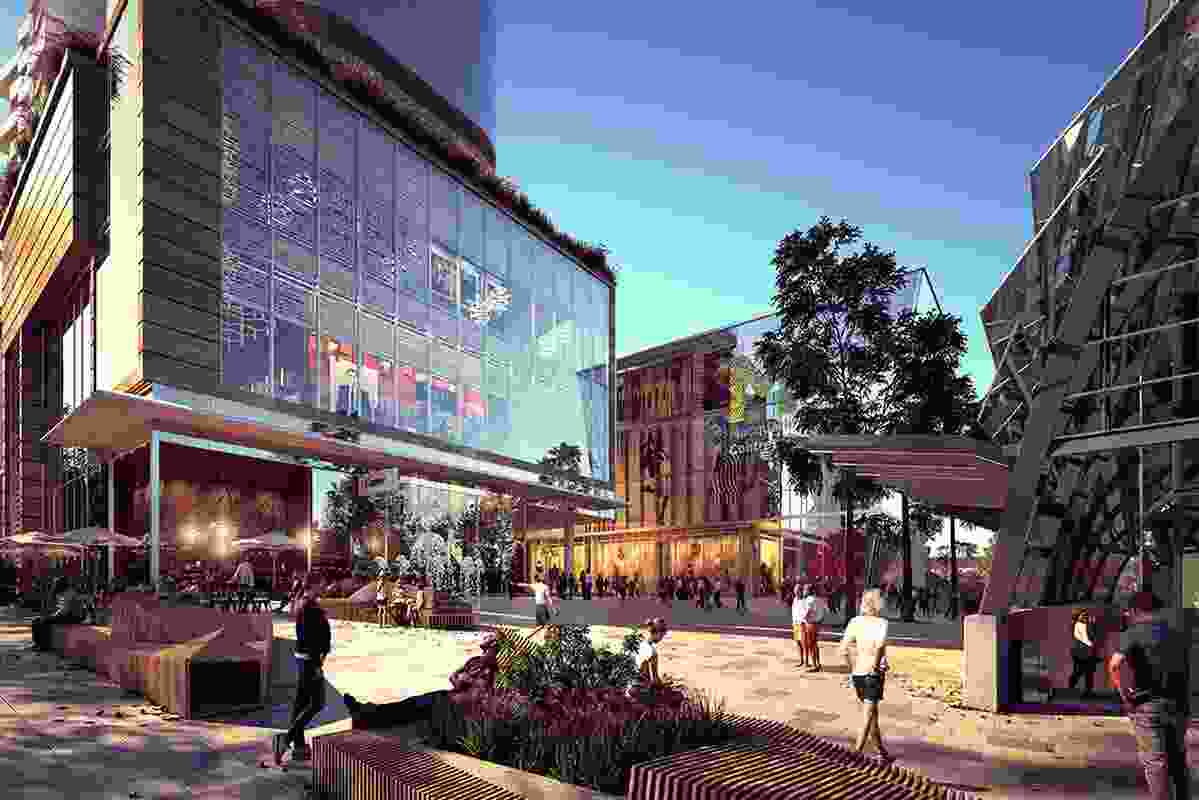 Stage one of the redevelopment of Macquarie Centre by NH Architecture and Allen Jack and Cottier.