Seizing an opportunity to build on an empty neighbouring block, the owners of a worker’s cottage in North Melbourne (with the help of NMBW Architecture Studio) have added a flexible secondary house that will allow them to age in place.

Comprised of varied shed-like spaces, North Melbourne House is personalized by the texture and colour of everyday objects.

This clever infill house in the tightly packed backstreets of North Melbourne offers valuable lessons for how we might rethink the single house as a flexible system that can adapt, beyond our immediate needs, to a range of life stages and occupants. Curiously, the house – which enjoys a neighbourly relationship with a Victorian worker’s cottage on the adjacent block – is the result of an act of protest. When the owners of the cottage found that the empty block next door was slated for a “transplanted McMansion,” they went to the council to object. At the point of seeming defeat – with construction of the McMansion primed to begin – a “for sale” sign popped up on the street front and the cottage owners jumped at the opportunity to buy the property. Only after this chance acquisition did the new owners’ plans for a home on the site begin to emerge.

As a couple with adult children who had left home, the owners began to explore the possibilities for their next twenty to forty years of life in the neighbourhood they loved. On the recommendation of a friend, they contacted NMBW Architecture Studio. By coincidence, or good fortune, NMBW had been exploring ideas of flexible infill housing for ageing in place for many years – beginning with the Core House project for Think Brick Australia in 2010 and the Infill Opportunities Design Research Report through Monash University in 2011. The practice developed concepts for a housing model with a fixed central core of stairs, bathroom and kitchen surrounded by a flexible perimeter of generous “shed-like” spaces. This idea finds its way directly into the adaptable plan for North Melbourne House.

The brief outlined a desire to maximize flexibility for future life circumstances and to maintain a relationship with the existing cottage. The owners reflected favourably on their experience of share houses in their university years. Having had elderly parents living with dementia, they were also acutely aware of wanting to avoid the isolation of living alone later in life. These conversations led to the idea of a series of small “apartments” nested within the house that could allow a live-in carer, children or friends to share the space while maintaining a degree of self-containment. In North Melbourne House, this is achieved through a choice of outdoor spaces and building entries, an allowance for potential additional kitchens and space for a future lift.

The demolition of a backyard bungalow and creation of a shared terrace enabled the kitchens of the existing cottage and the new house to be connected physically and visually. The two homes are separated by a glass sliding door on the common boundary; the distance is enough to maintain privacy while allowing the occupants to choose when they wish to interact. Currently, the cottage is rented to close family friends and the two households come together regularly on the shared terrace to enjoy the evening sun. Christmas and other social events have demonstrated the benefit of having access to both kitchens for extra cooking space.

The simple L-shaped modular plan is set on a 4.5-metre grid and leaves half the width of its street frontage unbuilt. This provides a north-facing courtyard and offers a burst of greenery back to the street. An elongated light-filled living area, with a raked ceiling and tall windows, is created perpendicular to the street; its silhouette recalls the brick lean-to so common in Melbourne’s corner terrace houses. The living area maintains a sense of privacy from the street while enabling views from within that extend to distant trees and chimneys, ensuring the owners feel “part of a bigger landscape” rather than just inside their own house.

Opening to the rear lane, an oversized folding timber door is set within the corrugated galvanized steel facade. Behind is a flexible garage space, which, instead of storing an idle car, is home to woodworking gear and bicycle storage. This space has a visual connection to the courtyard via the open laundry and sliding timber doors, placing these working spaces on show rather than hiding them away.

The material palette of the house is robust and familiar to North Melbourne, with red bricks exposed externally and bagged white internally, exposed laminated veneer lumber rafters and compressed strawboard to the ceiling, and hardwood joinery and plywood lining the walls. The shed-like spaces in the small house feel generous; the owners’ possessions bring texture and colour, and provision is made for crafted timber additions over time. Nigel Bertram, a founding director at NMBW, notes with delight how “every time I visit, there is a new thing [the owner] has done – for example, the beautiful mezzanine ladder, or the conversion of the future kitchen into a stand-up desk.”

Rather than a precious showpiece that forces its owners to adapt to it, North Melbourne House gets better as its occupants settle in. It embraces the idiosyncratic in its form and detailing, and is responsive to its context in a deeply authentic way that eschews the more conservative approach of a replica worker’s cottage. The house manages to offer both a replicable prototype and a highly site-specific response to its owners’ short- and long-term lifestyle needs. As one of the owners reflects, “It had never occurred to me that the design of a house could so accurately capture our way of living.” 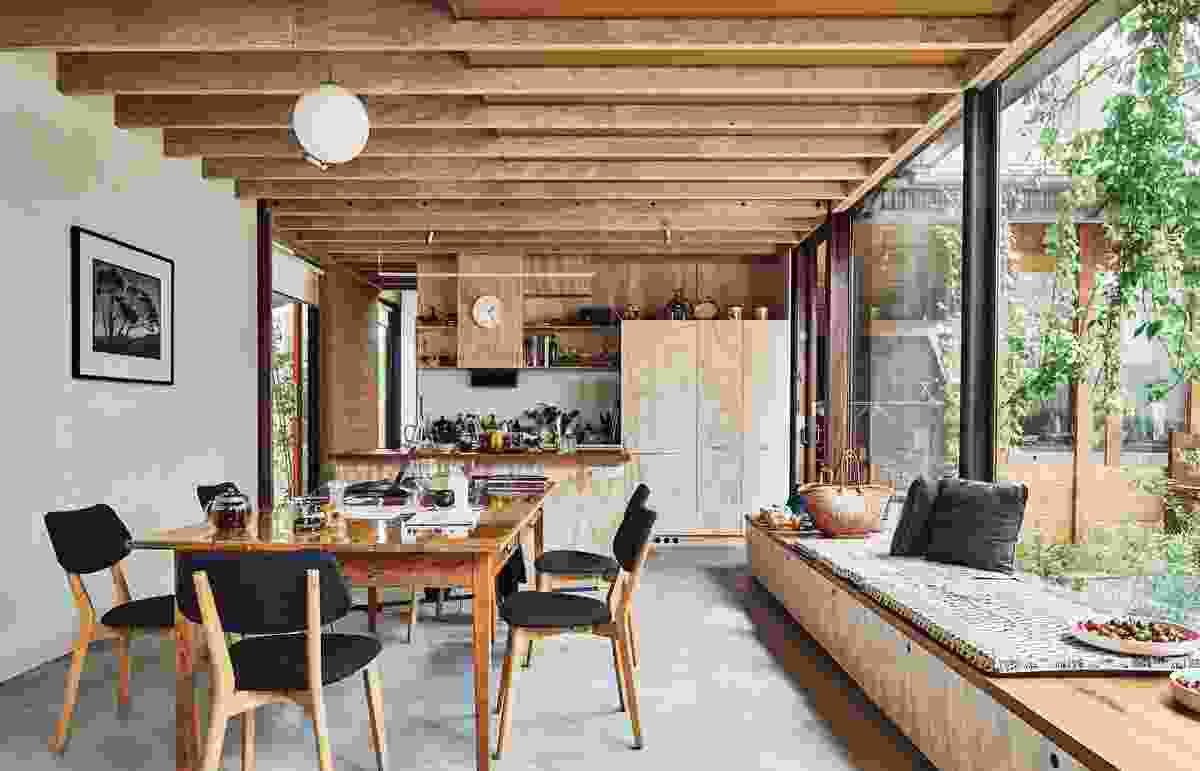 Comprised of varied shed-like spaces, North Melbourne House is personalized by the texture and colour of everyday objects. The silhouette of the exterior is reminiscent of lean-to extensions typical of corner terrace houses. 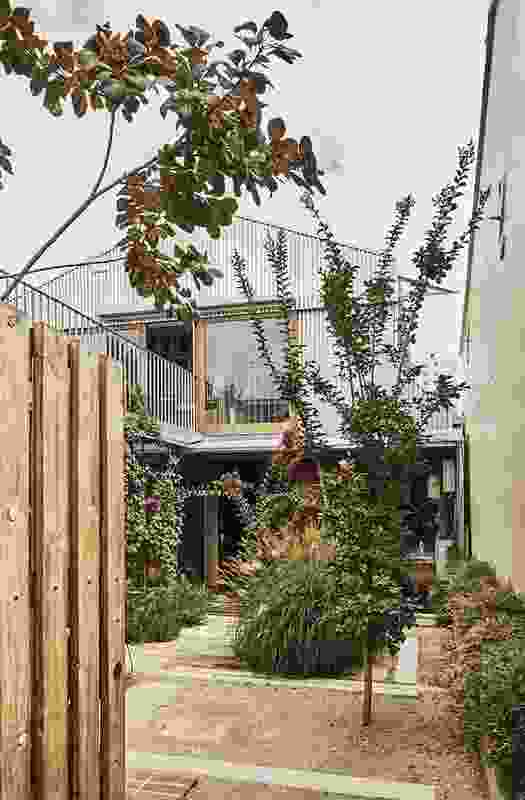 The L-shaped plan allows half the street frontage to be filled by a verdant courtyard garden. 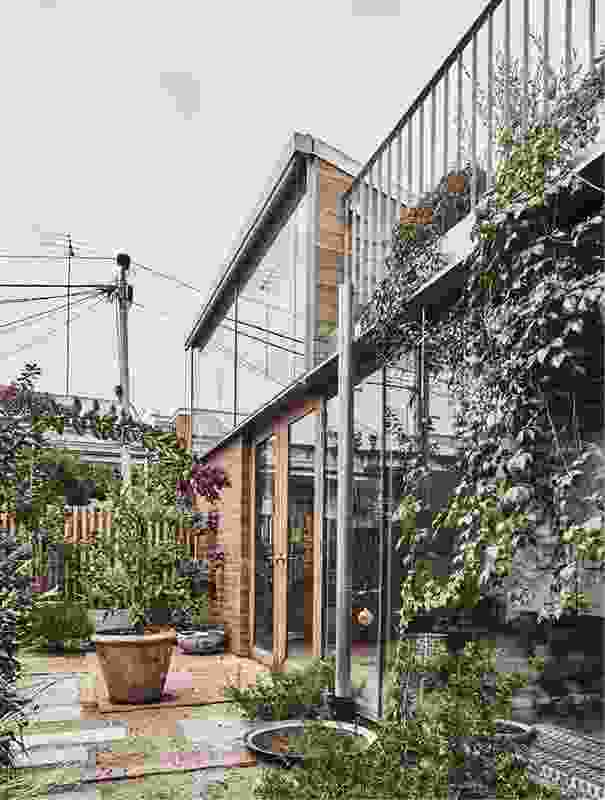 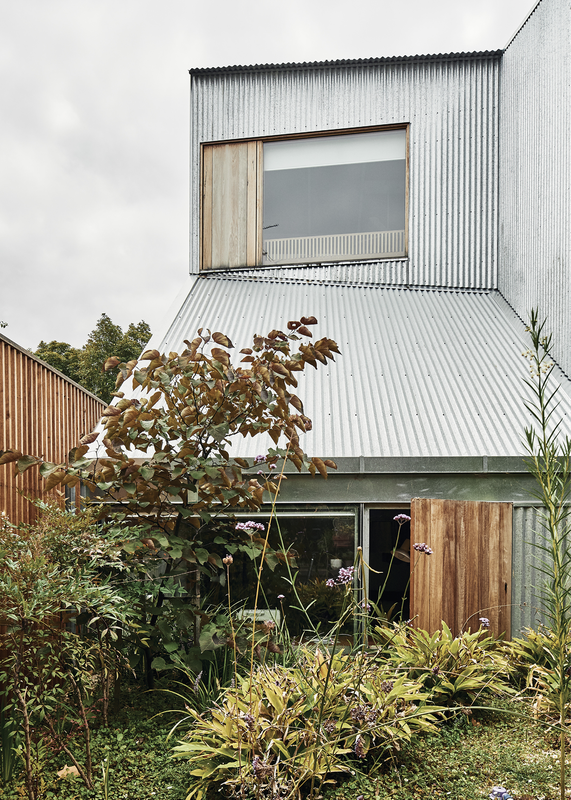 Windows set within corrugated steel cladding open to a shared garden located between the existing worker’s cottage and the new house. 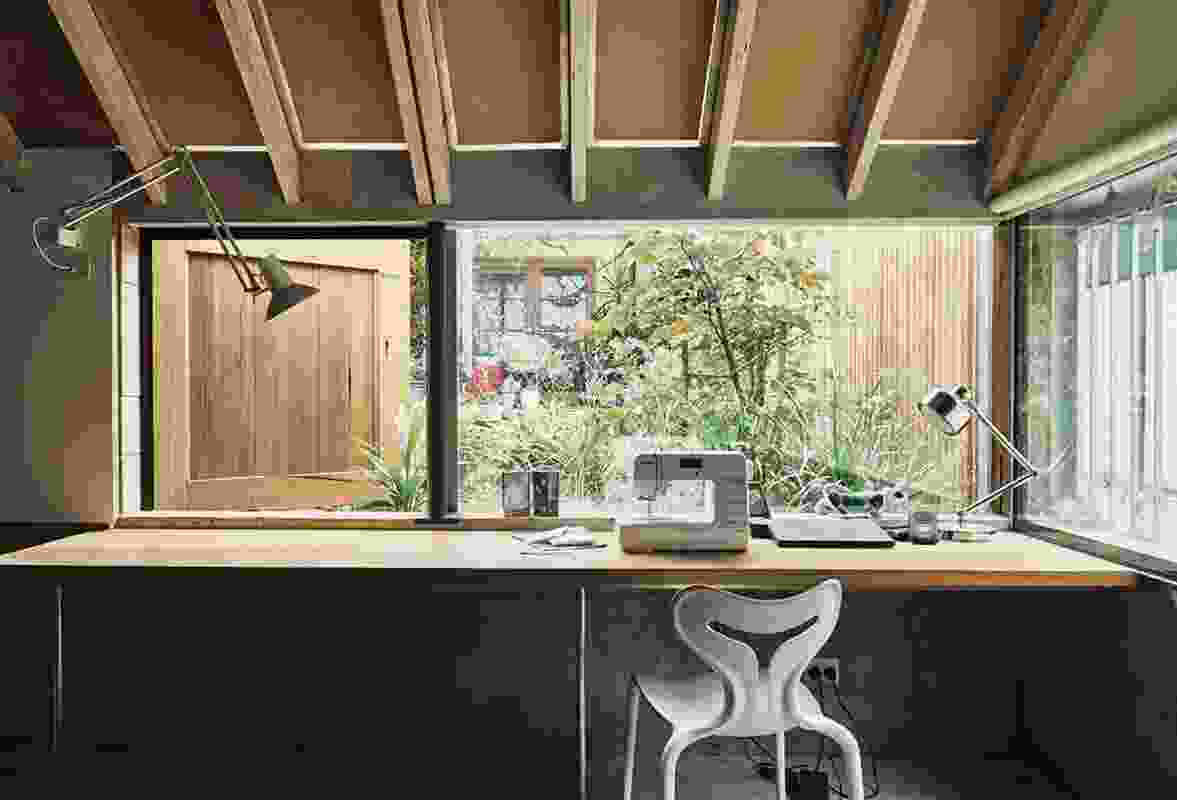