For stage three of this school project, Workshop Architecture abandons the traditional classroom model for a light-filled “internal playground”.

The paradigm shift in education toward open, shared spaces that focus on activity-based learning as opposed to the established didactic model is well and truly entrenched. It seems most education projects have jumped on board, no doubt inspired by progressive schools exploring the newest thing. The open, dynamic and still highly functional spaces required to make this model work present a diversity of challenges, and as James Staughton of Workshop Architecture notes, the biggest bonus in avoiding the stock-standard rollout of typical classrooms is the “opportunity that open plan gives to explore spatial possibility.”

This particular building represents the third stage of a masterplan developed for North Melbourne Primary School by Tony Styant-Browne, before he joined with Staughton to form Workshop Architecture. Replacing a series of old school portables, the new unified form expands on the same crisply detailed architectural language of striped Colorbond cladding and vibrant highlight colours as used in previous stages.

The building is located adjacent to the main school entrance, and where stages one and two formed protective wings to a central outdoor playspace on the west side of the campus, stage three brackets a courtyard at the existing school entrance, humanizing the imposing scale of the original school building.

The new form is essentially a bent rectangle, turning sharply in plan and opening the long side of the facade to catch the northern sun. In section, this northern edge is a double-height space that is set down in a wave of dramatically cascading tiers, admitting light deep into the space and grading down the visual bulk to a less imposing single-storey edge at the courtyard.

Internally, the highly developed planning required to make the open-plan model a success is omnipresent. The ground floor, which caters for four classroom groups, and the first floor, designed for a further three, are organized with the more enclosed “rooms,” such as the teachers’ area, theatre and storeroom, forming the southern and western edges of the plan. The north- and east-facing areas are given over to open space, with careful placement of internal glazed walls and custom-made furniture serving to define loose thresholds between reading and quiet areas, computer rooms, and arts and crafts zones.

Each space has an obvious primary function; however, the need for flexibility is accepted and built in. Mobile tub trolleys are easily relocated to define new spaces, while an oversized ottoman dubbed “the pizza” creates an impromptu platform for gatherings or casual reading. This ottoman also marks a transition between the carpeted entrance hall and the wet areas designated to art and science activities. Wet areas, while lined in resistant materials, have successfully avoided becoming sterile or unwelcoming. Equally, as was the case at the time of my visit, the quiet spaces become excellent impromptu theatres that can be easily adapted to become an additional classroom.

Located in the heart of the space and connecting the two floors is a grandiose and playful spiral stair. The architects chose a circular path instead of a conventional straight run because of the opportunity it presented for a “slow reveal.” The spiral stair opens the entire space up to be appreciated as students climb it, giving them a full 360-degree view across the interior. The view on the way down is pleasingly different again. Fabricated off site in steel with poured in situ concrete treads that minimize noise, “the giant crayon,” as students have dubbed it, was intended as an allusion to Mr Squiggle – sadly a reference the current users may have to YouTube.

Thankfully, the desire to apply layers of garish colour has been restrained. The palette applied to walls, ceilings, acoustic panels and vinyl flooring is almost universally white and prepared for the inevitable onslaught of Blu-Tacked student artwork. The white also moderates the significant presence of the heat-exchange units. Mounted to ceilings in most rooms, these economical units replace inside air with fresh outside air while retaining 80 percent of the heat, complementing the building’s super efficient air-leakage control (one-fifth that of a typical classroom).

Charcoal greys in micaceous oxide paint are used to signify utility elements of the steel structure, the stairs and the carpet. Hints of colour are used sparingly in the nose cone of the stair, which is banded in pink, white and brown and harks back to childhood memories of ice-cream before cardamom and rosewater was an option and neapolitan was the fancy dessert of choice. This “ice-scheme” is judiciously applied again to the vertical faces of the stepped northern ceiling, while a vivid orange is saved for smaller ottomans, adding splashes of colour wherever they are carted.

Workshop Architecture has crafted an impressive built example of this evolving pedagogy, with the school principal remarking as we left that teachers have embraced the building and have never worked so hard, nor enjoyed teaching so much, as they do now. 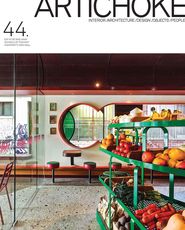 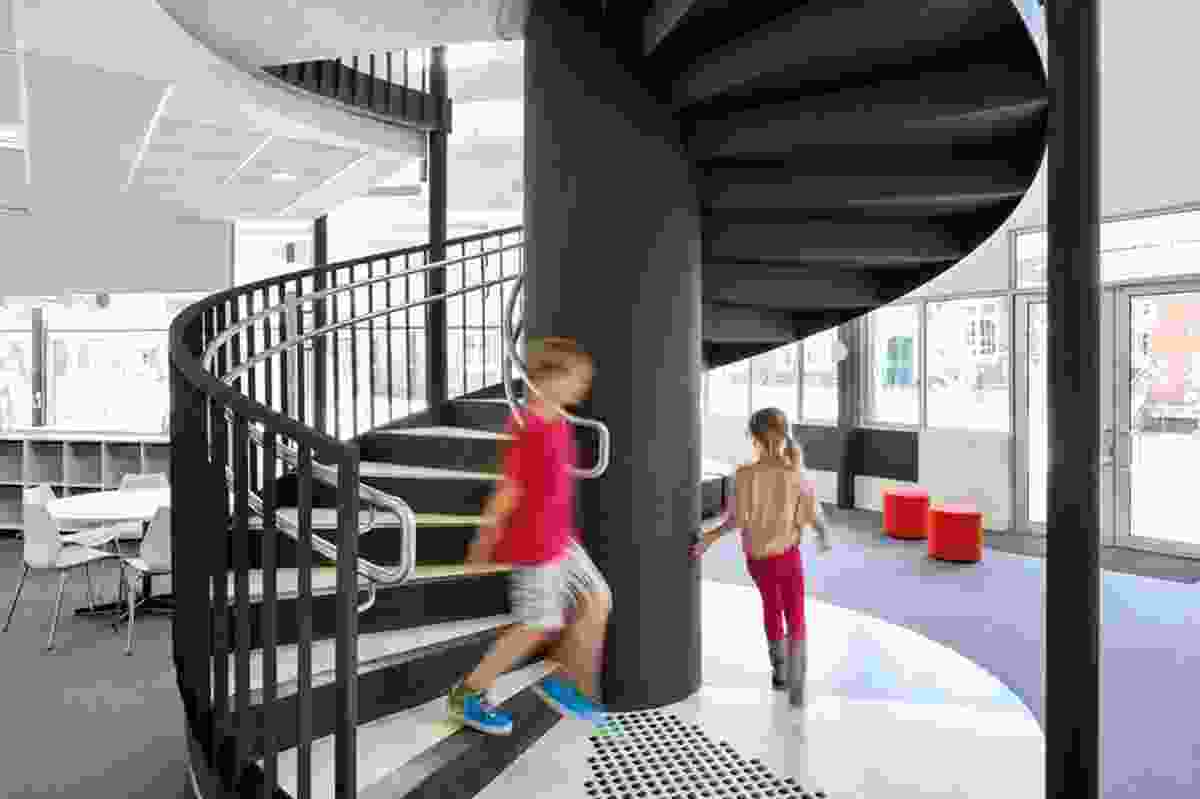 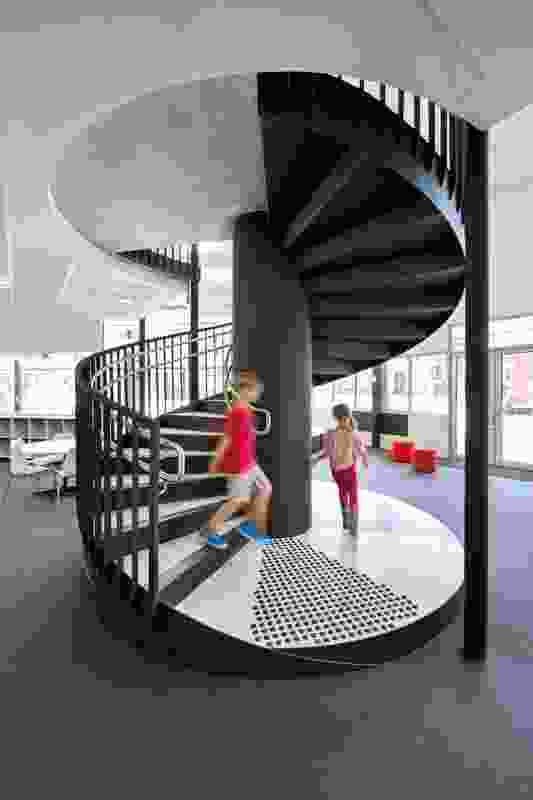 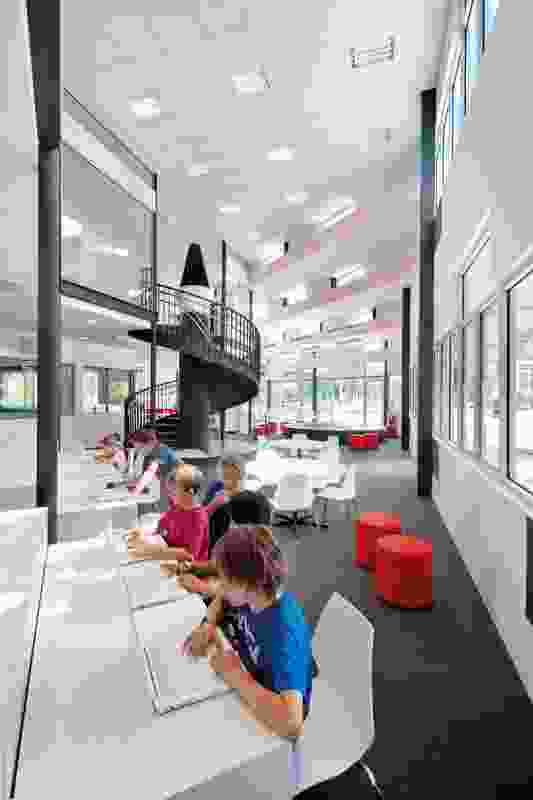 The building features a double-height space with a wave of cascading tiers; the staircase is a Mr. Squiggle reference. 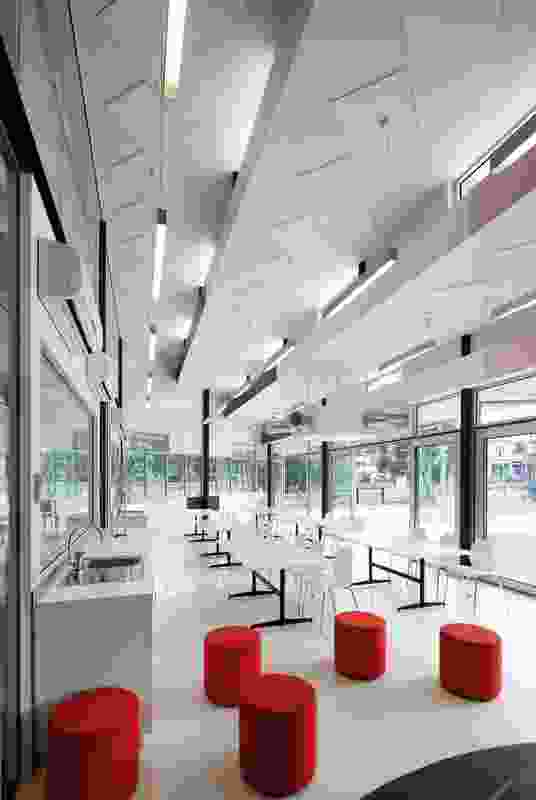 Ground-floor classrooms are located on the western edge of the plan. 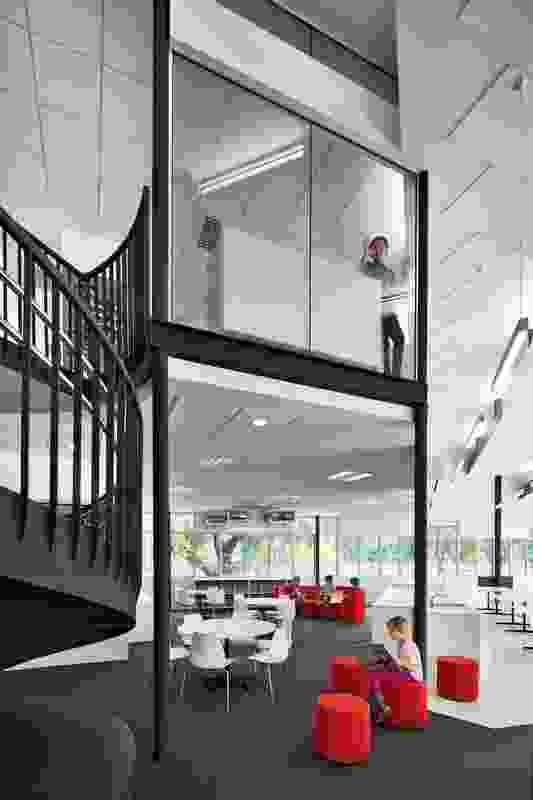 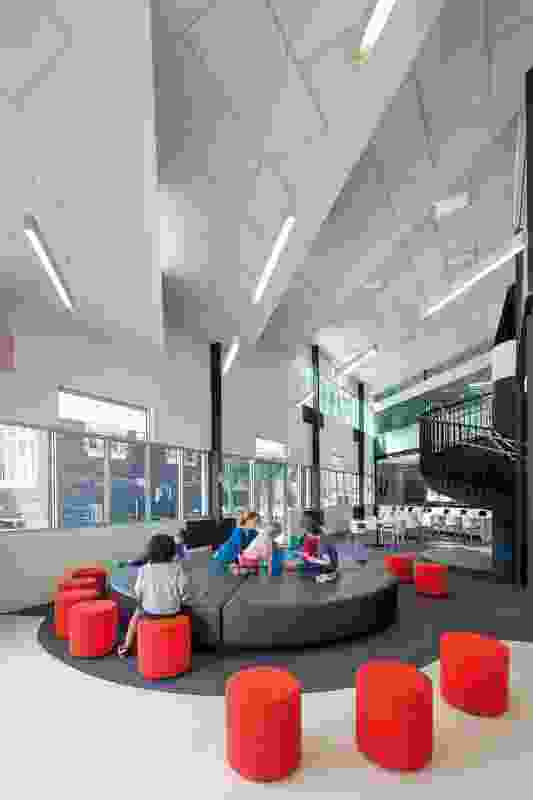