The glazed curtain wall of the new Novartis building works to explicitly communicate the transparency of the company’s practices and public presence.

One of the toughest design challenges that an architectural practice can undertake is to be found dotted throughout the sprawling mass of most metropolises. Commercial buildings in business parks and industrial estates typically do not offer the design cachet of CBD highrise, nor do they tend to attract the budgets and creative liberties associated with their soaring siblings. Stranded in plots of blurry urbanism and seas of asphalted carparks, these projects are used by many architects as bread-and-butter work, gratefully accepted but perhaps not well loved. Value managed to within an inch of their glass facades, once completed they are relegated to the last drop-down tab of the firm’s landing page. This is not the case for HDR Rice Daubney’s recent project for Novartis. The Novartis Head Office is located in Macquarie Park – a fast growing hub in Sydney’s north-west – and here architect and client have raised the stakes in terms of architectural quality and urban presence.

It has to be acknowledged that Novartis – a multinational healthcare and pharmaceutical company – is no ordinary client. Noted for its legacy of big-name architectural commissions, its Basel headquarters includes buildings by Frank Gehry, SANAA, Álvaro Siza, Rafael Moneo, Herzog and de Meuron, Tadao Ando and Rem Koolhaas. A seemingly endless list goes on, with a rollcall of the heavyweights of contemporary global architecture. While the Macquarie Park head office is hardly on the same scale as Novartis’s Basel campus, the client was nonetheless committed to providing its Australian team with a building that embodied the firm’s commitment to architectural innovation and quality, in addition to the wellbeing of its staff, clients and community – an expression of its mantra “caring and curing.”

The site of the new building is directly adjacent to Novartis’s former offices, occupying what used to be a carpark. Even though Novartis has been a long-term resident in the area – for some forty years – an emphasis on security meant that the former building was heavily walled and gated and its architecture was deliberately anonymous. There was no street presence and no engagement whatsoever with its context. One of the principal drivers of the new project was to ensure that the design actively contributes to the strengthening of the urban qualities of Macquarie Park and also conveys a greater sense of transparency about the company’s practices and public presence. The existence of an underground train line along the boundary of the site complicated the resolution of the street address. The required setback tempered the architects’ desire for a well-defined street edge, pushing the facade back away from the road. However, the scale and articulation of the all-glass front give it enough presence to mitigate the distance and prevent the building appearing like a stranded box. This is further assisted by the well-considered landscaping by Aspect Studios.

The immediate reading of the building is deliberately straightforward. Novartis wanted to demonstrate its openness to public scrutiny and accountability through an explicit communication of “transparency.” The schema devised by HDR Rice Daubney is that of a transparent glass rectangular box intersected by an opaque series of snaking, dancing, curving cores. Principal and design director at HDR Rice Daubney Paul Reidy states that the contrasting elements symbolize different aspects of Novartis. The glass box that houses the task-based activities of the program was conceived to represent the scientific side of its work, while the timber curvilinear cores – housing communal space, staff facilities and services – represent the humanistic side of the company. It would be disingenuous to dismiss this approach as merely a built diagram as the actual experience of the building – interior and exterior – is complex, layered and, at its most considered moments, highly dramatic.

The original iteration of the project had the lifts and services in a conventional side-core position. Reidy said that they were eventually moved into the atrium to break up the potential monotony of these spaces. On paper this may have been a risky strategy, but the effect adds to the experience of the atrium and of the upper levels as well. A staggered, alternating configuration of the main circulation staircase was devised to encourage occupants to “walk and talk,” not only getting their daily step count up, but also activating viewpoints in and around the atrium. On every second level a tight Juliet balcony billows out to form a tiny spot much loved for making personal phonecalls.

This project was intended to consolidate in one building the six different business units of Novartis’s Australian operation. There was much debate as to how to spatially configure what were in essence six distinct companies into one workspace. Rather than segment the building into a series of vertical strata, activity-based working (ABW) was adopted. This was a big move for a company that described its work practices as “conservative.” The implementation of ABW was particularly radical, with the CEO and all managers renouncing dedicated offices. The absence of offices has allowed for a density of workspaces that is far more generous than in many other cases. The floors are configured with low-focus zones in the central area, adjacent to the atrium and communal facilities, and high-focus zones distributed at the extremities. The legibility of the floors is excellent. Low-focus zones are marked by polished concrete flooring and exposed concrete ceilings, high-focus zones by carpet and plush upholstered cubicles. Communal areas are clad in spotted gum slats with golden highlights. Reidy was adamant that this project not fall into the trap of many ABW schemes, where bright, bold colours are equated with creativity and flexibility. A palette of grey, white and timber dominates, with the occasional addition of a red or orange upholstered item.

This project is a big step in the right direction in relation to workplace design as well as quality architectural development outside the CBDs of Australian cities. The strong urban presence of the building posits a greater engagement of architecture, site and street, while its interiors are well considered and generous. It can be hoped that the Novartis Head Office will become a benchmark for future designs of this nature. 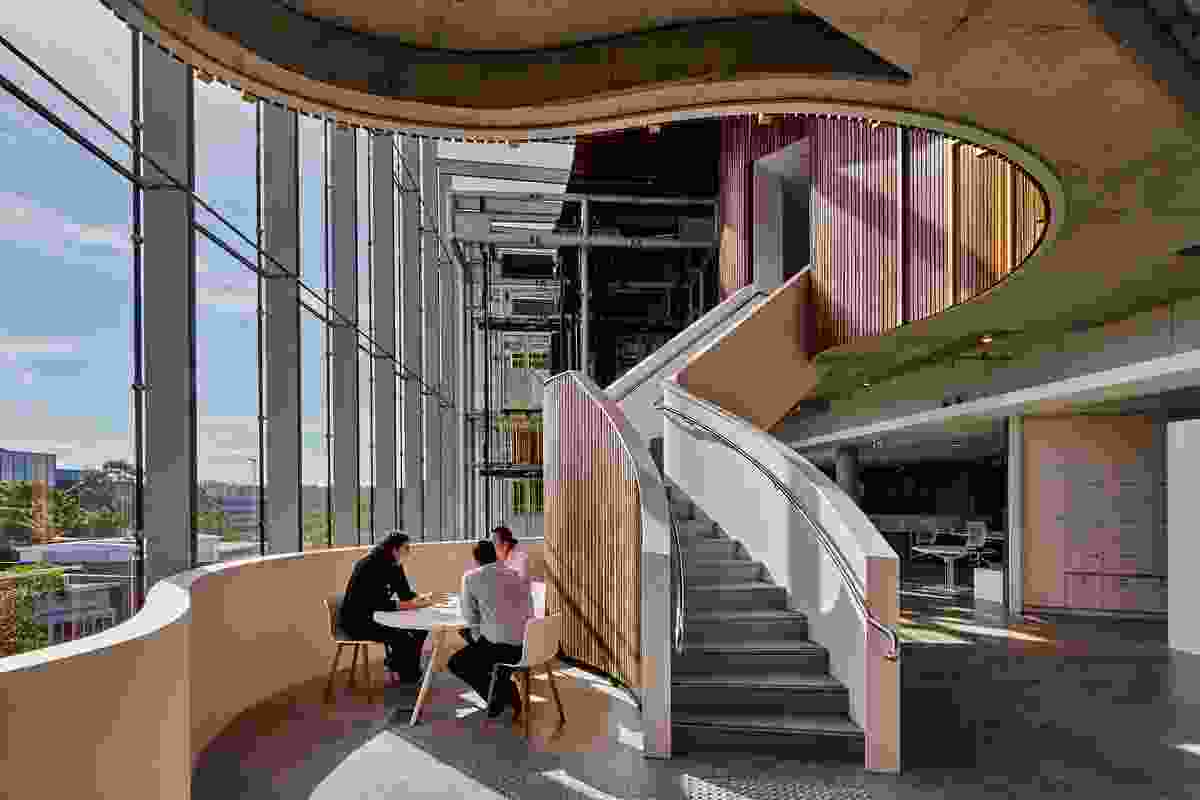 The glazed curtain wall of the new Novartis building works to explicitly communicate the transparency of the company’s practices and public presence. 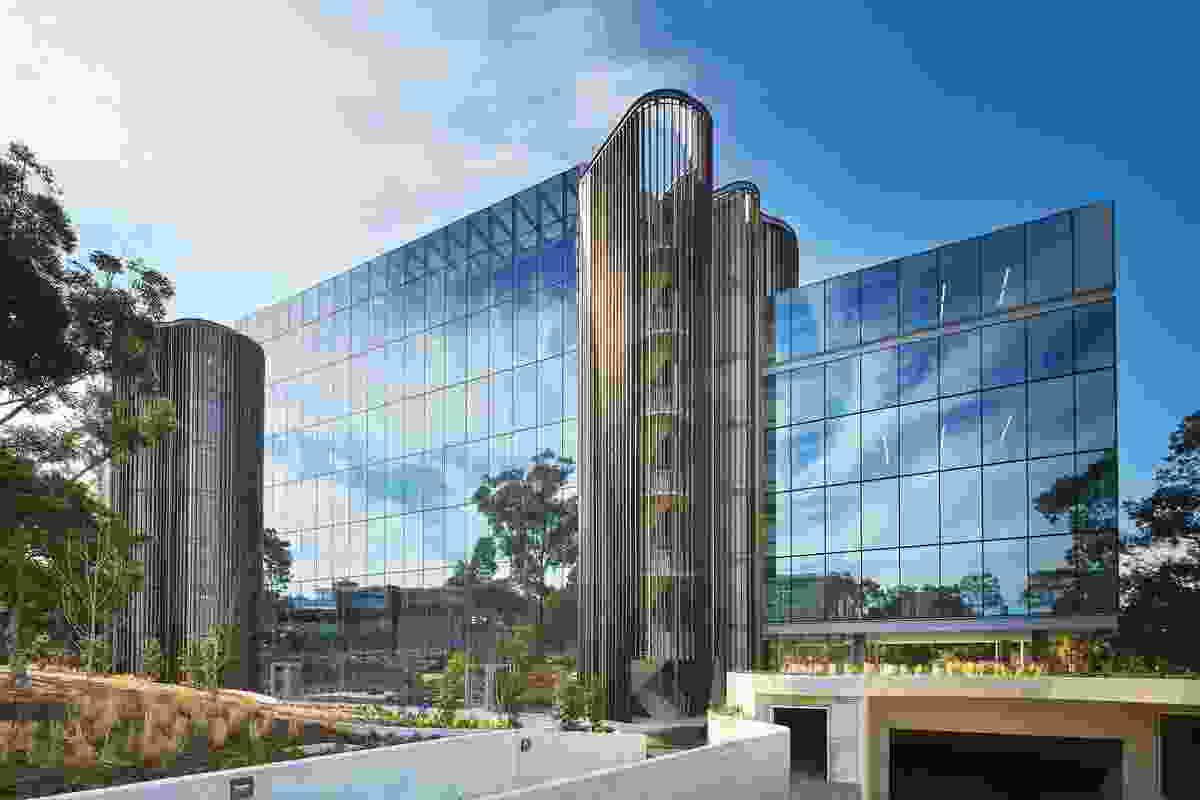 The glass rectangular form is designed to represent the scientific aspect of Novartis’s work, while the timber curvilinear cores represent the humanistic aspect. 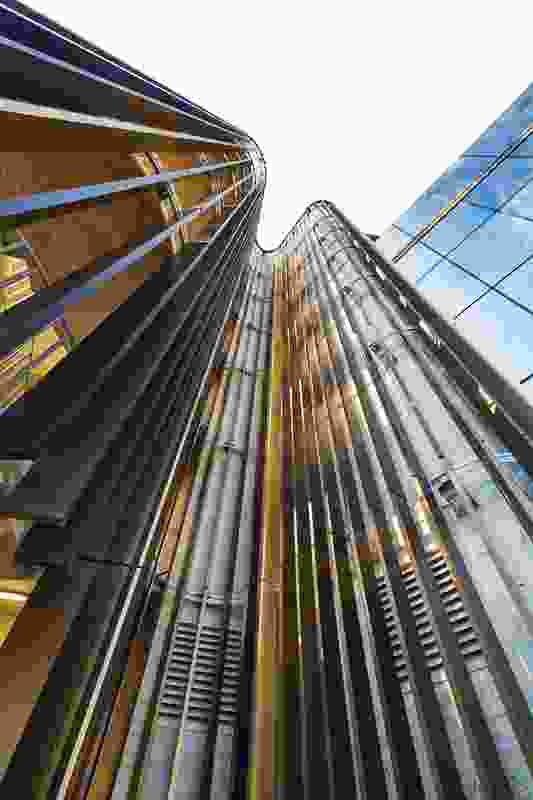 The transparent glass rectangular box is intersected by a series of opaque timber curvilinear cores that house communal spaces, staff facilities and services. 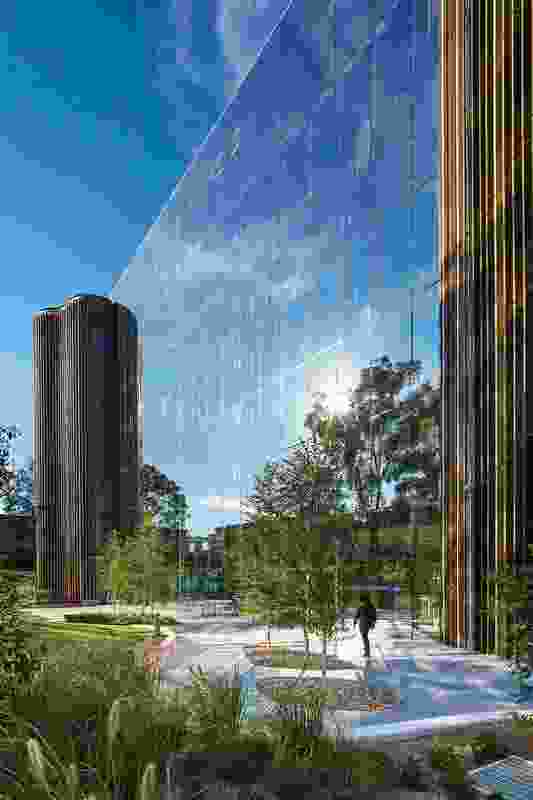 One of the main design drivers of the project was to ensure that it contributes to the urban qualities of the Macquarie Park business hub in Sydney’s north-west. 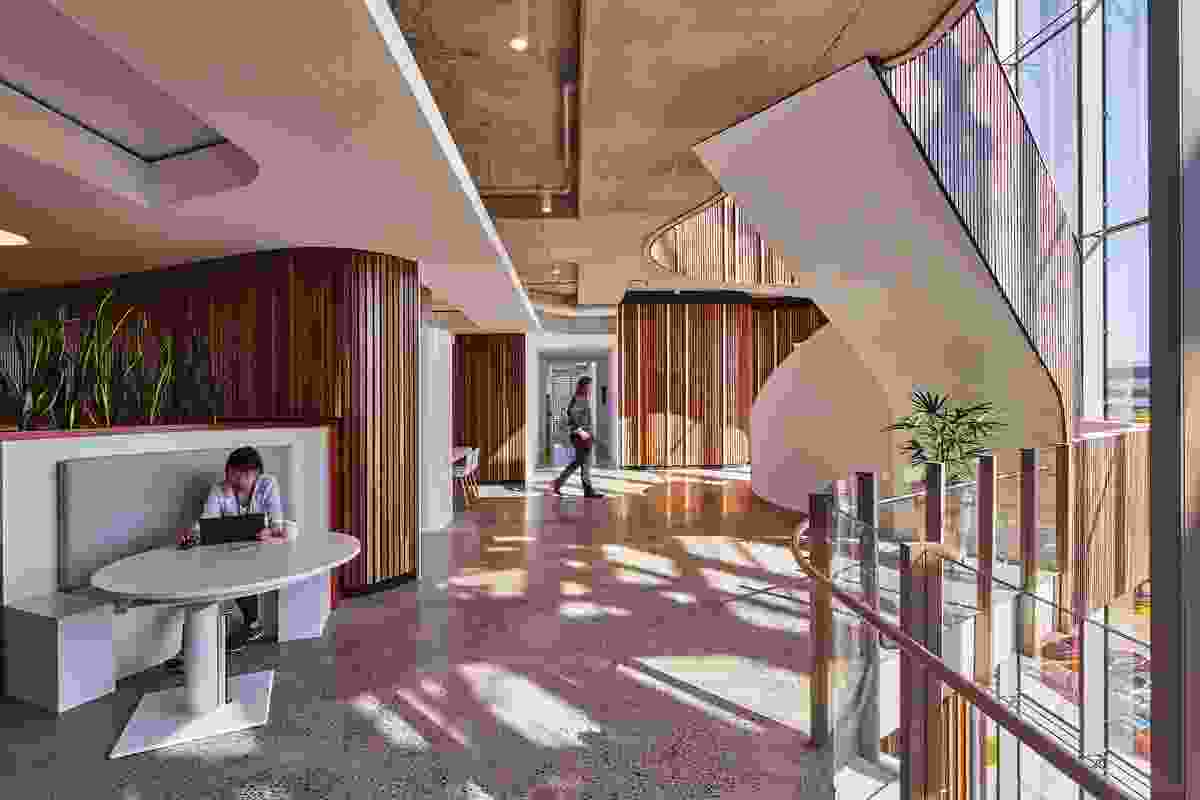 Workspaces are configured according to low- and high-focus zones. Low-focus zones are marked by polished concrete floors and exposed concrete ceilings. 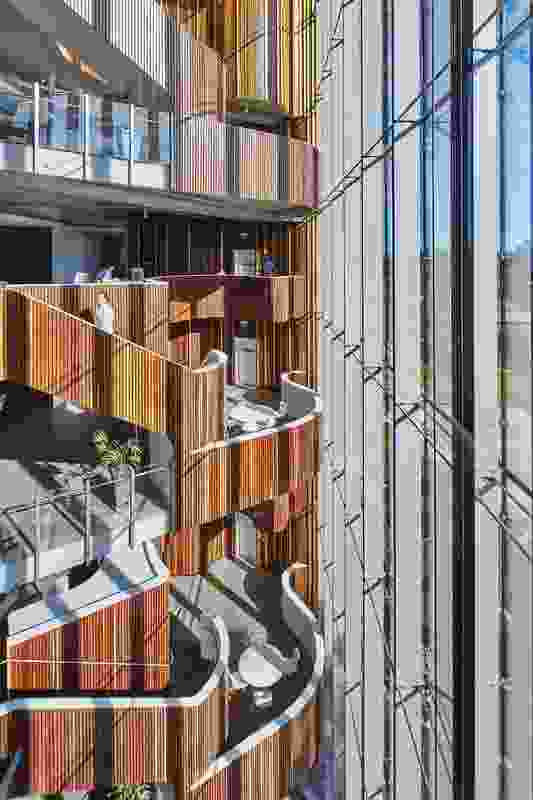 The staggered, alternating main circulation staircase is configured to encourage occupants to “walk and talk,” while allowing views in and around the atrium. 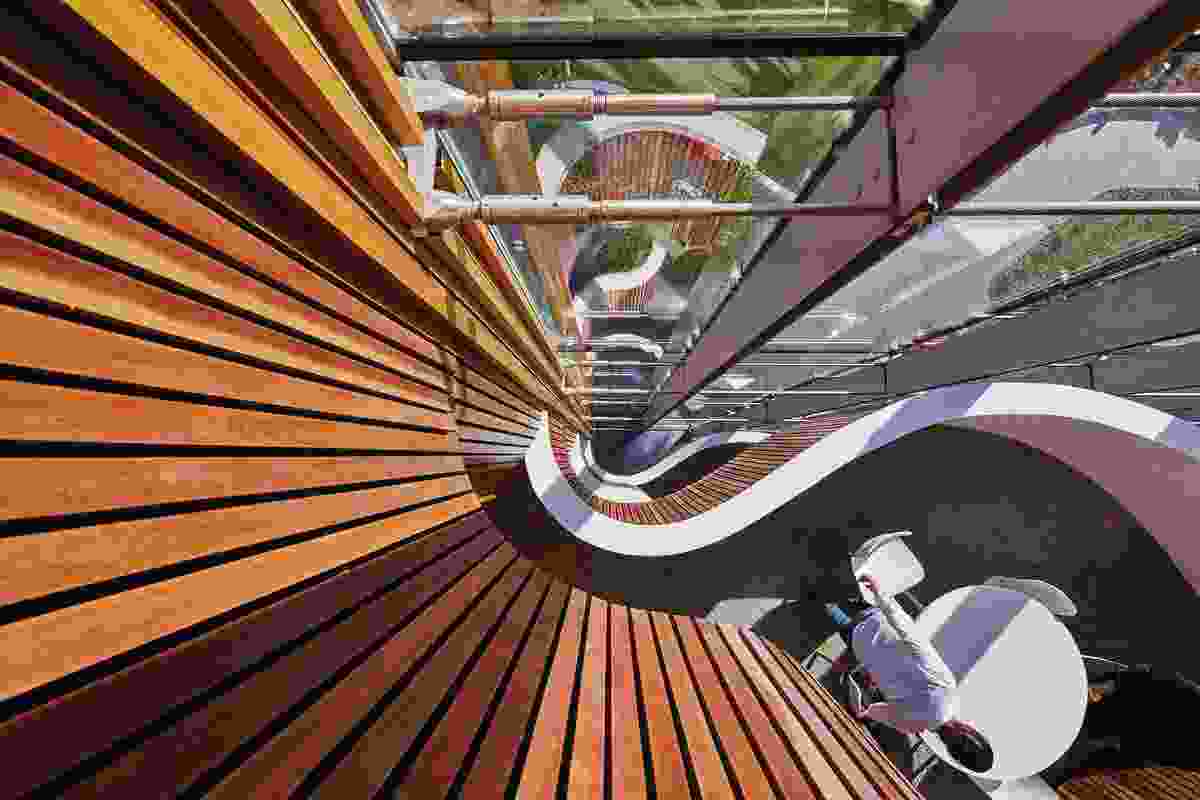 A restrained palette of grey, white and timber dominates the interior, making the point that bright, bold colours are not required for creativity and flexibility in the workplace. 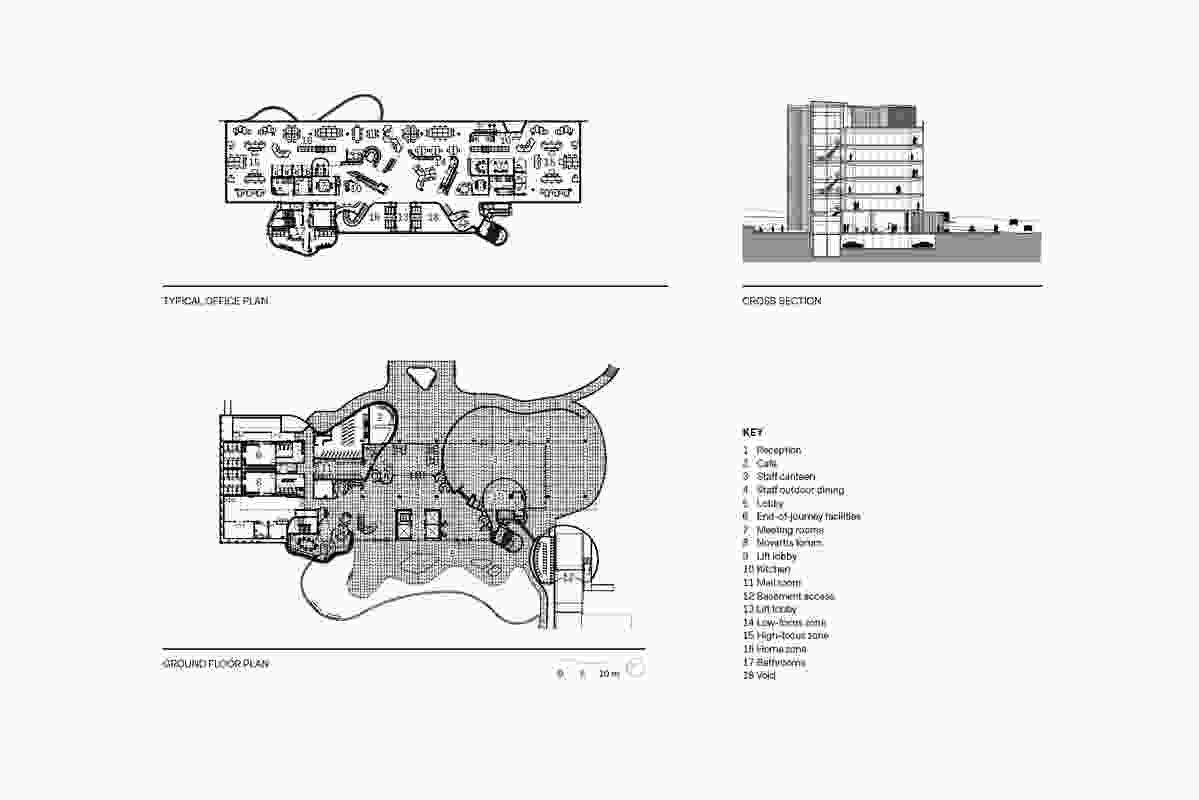