M3architecture brings pattern to the fore in Brisbane.

For many years, architecture has maintained an ambivalent relationship with pattern due to its association with wallpaper, carpets and curtains, and the practices of the decorator. These, and other concerns, are raised in Helen Castle’s editorial “Patterns of Architecture” for a recent issue of the journal Architectural Design (AD). In this volume, some contributors have focused on psychology and perception of patterns, particularly when they cause spatial disturbance. Others have examined “pattern recognition,” perhaps influenced by the legacy of systems thinking – including simplified ecosystems and holism – as much as by the ability of computers to produce biomimetic-inspired designs.

While the former concerns experiential effects, the latter distances architecture from a more inclusive approach that deals with broader issues of culture and society, immanence and the lived practices of contemporary society. This might be regarded as the search for disconnection, decentralized systems and variability that is found through images, instant messages, network spaces, sampling and mashing – what we might broadly define as “modernity.” Contributing to this is a continuing cultural connection with ornament, textured surface and patterns, as practised by high-street fashion designers, tattoo artists, decorative artists and so on.

For the Nudgee College Tierney Auditorium project, M3architecture seems to have bridged the gap between the two polarities. On the exterior, their alterations reflect spatial patterns found in the histories of habitation and territorial architecture, whereas in the interior repeating patterns offer a disturbance to the architecture that questions the distinctions and separations of clearly identified forms and surfaces.

In this project, associations between the existing form and personal memories of similar shapes provoke a seemingly uninhibited response that places the architecture in a different sphere, a different pattern of relationships. Acknowledging its own brutalist heritage of rationalist geometry – exposed brickwork and raw concrete of the kind that was prevalent between the early 1950s and the mid 1970s – it draws in broad influences including American architect William Pereira’s Geisel Library. At the same time, it responds to the solid geometries of Mesoamerican architecture, pyramids, ziggurats and other mysterious structures, inspiring connections to antiquity, ceremony and processional pathways.

While architectural purists might find such connections at best tenuous, M3architecture’s actions are supported by many examples of designs derived from seemingly unrelated social, cultural and technological traditions. The evocation of such references is not new: witness the number of Art Deco designs derived from Egyptian and Aztec art, as well as the Greek- and Roman-inspired architecture that appeared between the mid 1970s and 1980s, optimistically called “postmodern.” Although often shunned since the 1990s, the attempt to adorn through repeating motifs, and ancient architectural symbols including pediments and porticoes, opened space for a more pluralistic engagement with architectural form and space.

The Tierney Auditorium is the second project M3architecture has completed for St Joseph’s Nudgee College, a Catholic day and boarding school for boys on the outskirts of Brisbane. It is born out of a good working relationship between client, architect and builder, and represents a recognition by the client that many of its older and underused buildings can be transformed into active building stock. While this is commendable in terms of sustainability, it also makes for interesting work, particularly when the existing building is treated as a found object displaced by time. I suggest this because the architects’ approach is to build upon various architectural sources to effect a theatrical transformation, and what might be termed an exercise in imaginative time travel.

The question, then, is to what extent the existing architecture should be respected, and how much it should be changed. In this instance the building is not an ancient monument of historic interest and its function has altered from that of a sports hall to that of a performance venue. To announce this change, a new entrance is carved out of the rear courtyard and is flanked by two existing inclined concrete “buttresses” that support roof beams. Between the buttresses a new canopy appears to be supported by five columns, an unusual number given classicism’s normal regime of even numbering that allows for centralized entry. On either side of the canopy, existing rendered walls are adorned with a repeating vertical motif reminiscent of a cornice elaborating a parapet.

The compressed entrance canopy leads to a foyer that opens vertically, revealing a textured decorative ceiling that recalls plaster ceilings in the former Regent Theatre, Brisbane, and the more sculptured geometries of the Alhambra in Granada, Spain. It does not, however, explicitly sample any of these references. Instead it responds to the geometries and opportunities presented by the brief and the building. The foyer acts as a transitional point between the outside world of the revamped hall, with its associations with other places and architectures, and a sculptural crystalline interior composed of a repeating pattern. In contrast to the raw and simple flat surfaces of the existing brutalist edifice, the interior has moments where multifaceted forms maximize surfaces and spatial depth. The three-dimensional patterned surface, far from offering a sense of clutter or confusion as is so often the criticism of such work, shifts the vertical into the horizontal. The material transition enables wall to become roof, continuing the effect of the erosion of a solid monumental form.

Entering the four-hundred-seat auditorium is like venturing into a sacred and secret chamber. All fabrics and surfaces are black, except for the auditorium side walls, which are covered by a four-hundred-millimetre-thick crystalline pattern, the geometry of which is derived from the angle of the buttresses. This creates a series of triangles, half of which are black; the remainder, illuminated by fibre optics, are lined with mirrors and decorated with rhomboids. The multiple reflections created by the three angled mirrors and the variable colour spectrum produced through the fibre optics create an effect not dissimilar to that of a kaleidoscope. One interesting optical effect is that, after a while, the intensity of kaleidoscopic pattern tends to flatten out and the dark triangles appear to be deep voids. Again, the decorative pattern disturbs spatial depth, creating a vibrant and dynamic environment in a manner that is both interesting and innovative. Moreover, the kaleidoscopic surface offers a spatial alternative to the planar patternation evident in recent work by local and overseas architects.

For Nudgee College there is a pleasant quirkiness in the way that the project avoids being a normal institutional building and announces its importance beyond the local context. On the inside, the project has responded intelligently to the brief while still remaining a little edgy. It is now cool for boys at this rugby-mad school to enter the drama department. 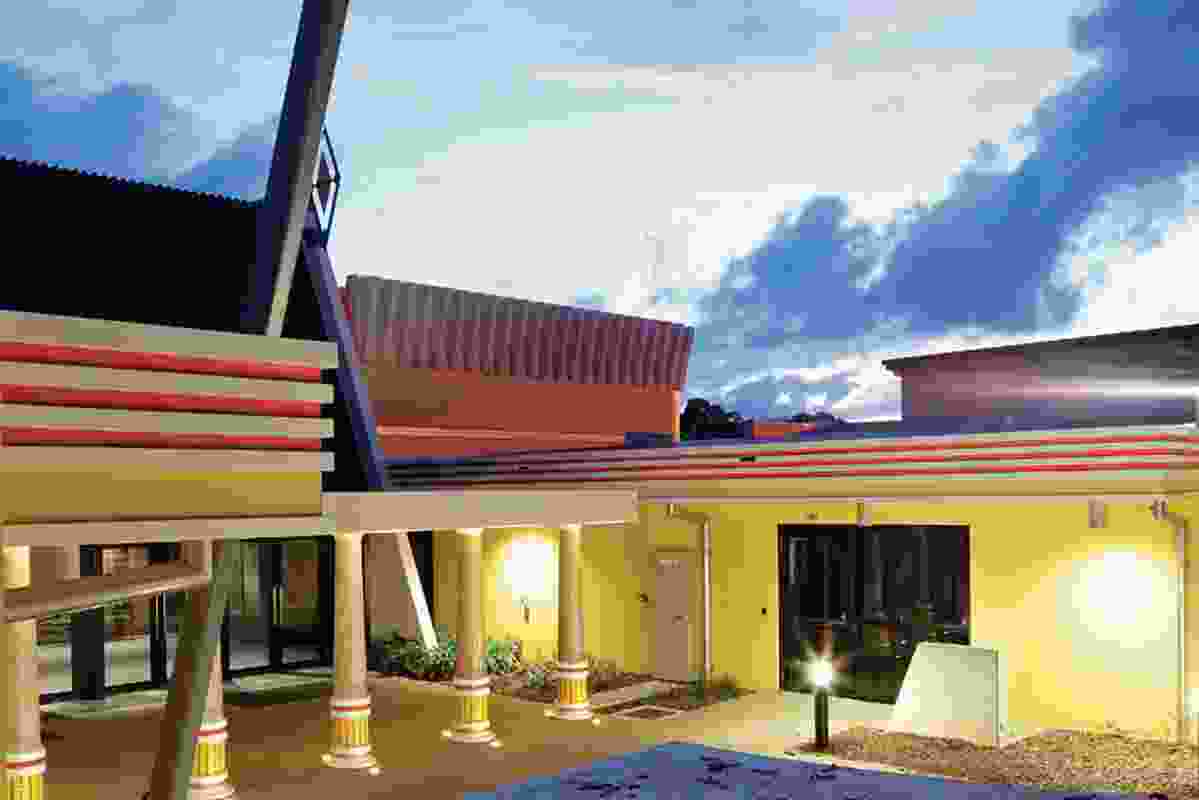 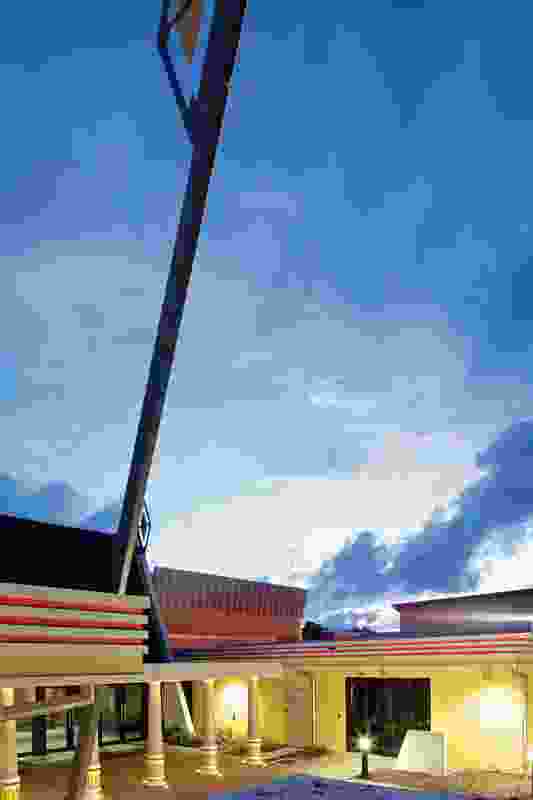 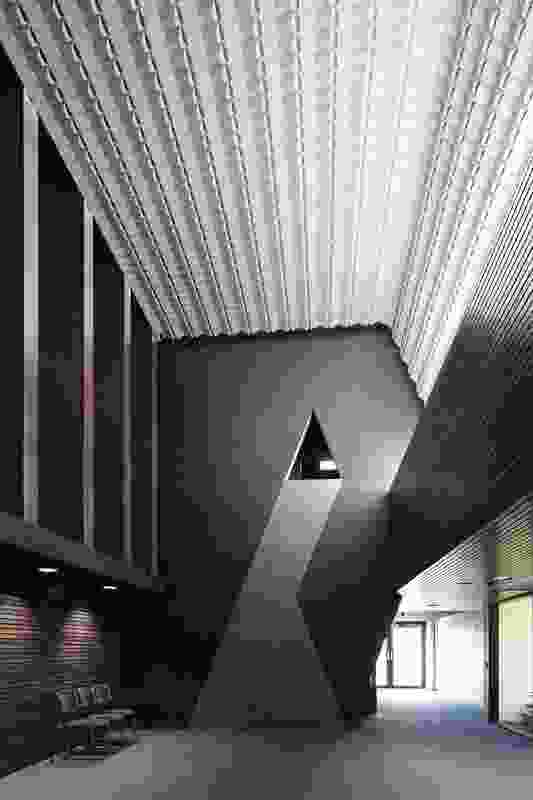 The compressed entrance canopy leads to a foyer that opens vertically, revealing a textured decorative ceiling. 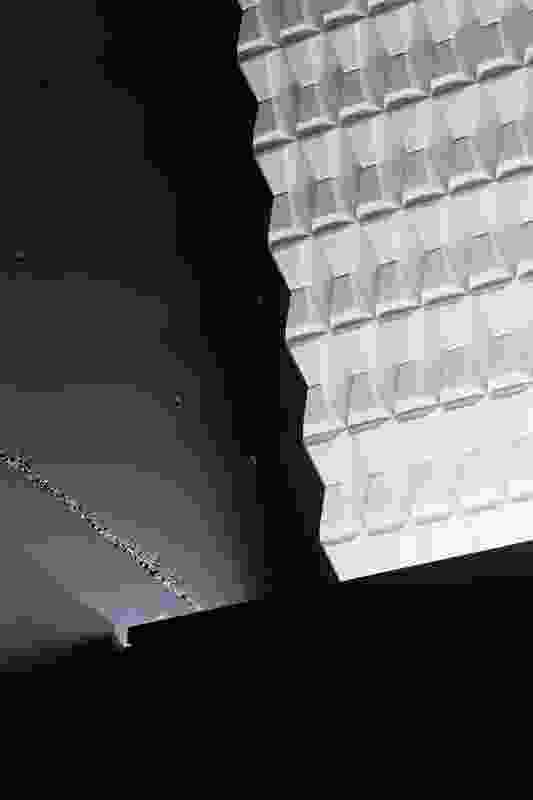 The ceiling recalls those of the former Regent Theatre, Brisbane, and the geometries of the Alhambra in Granada, Spain. 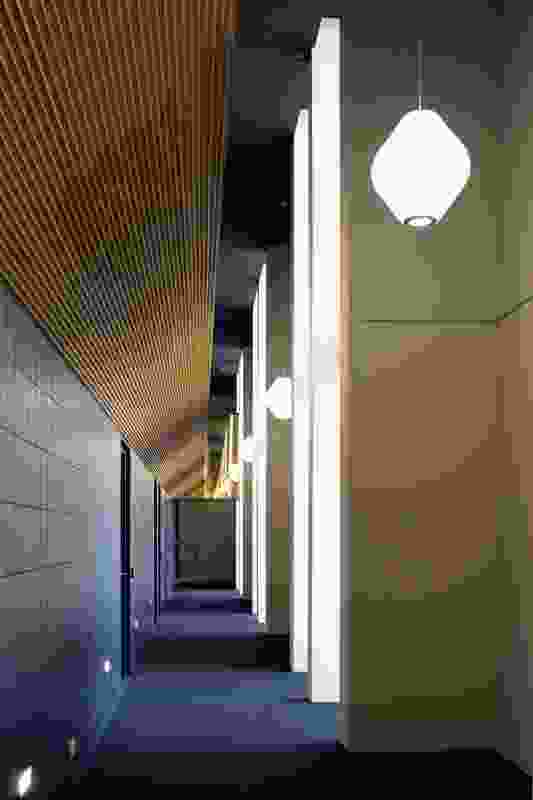 The interior has moments where multifaceted forms maximize surfaces and spatial depth. 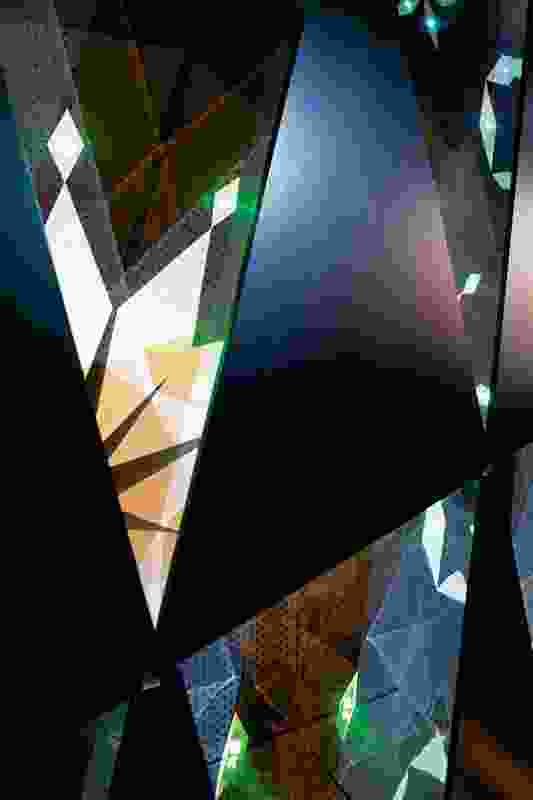 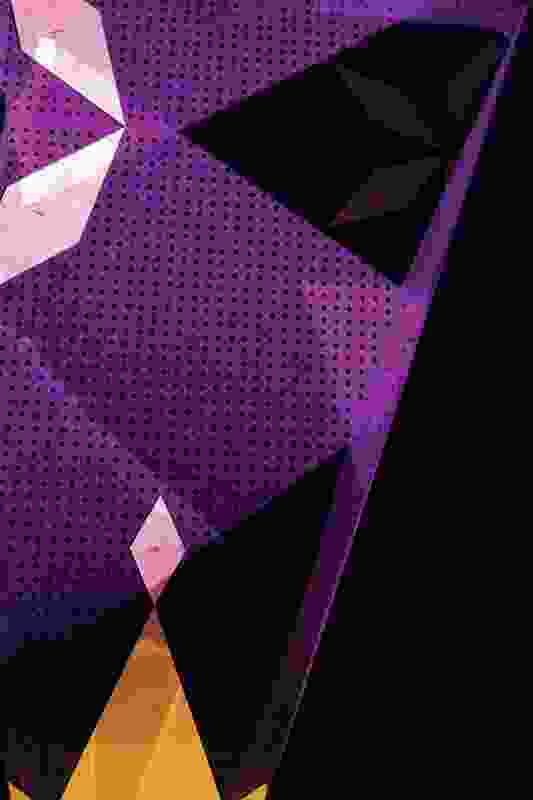 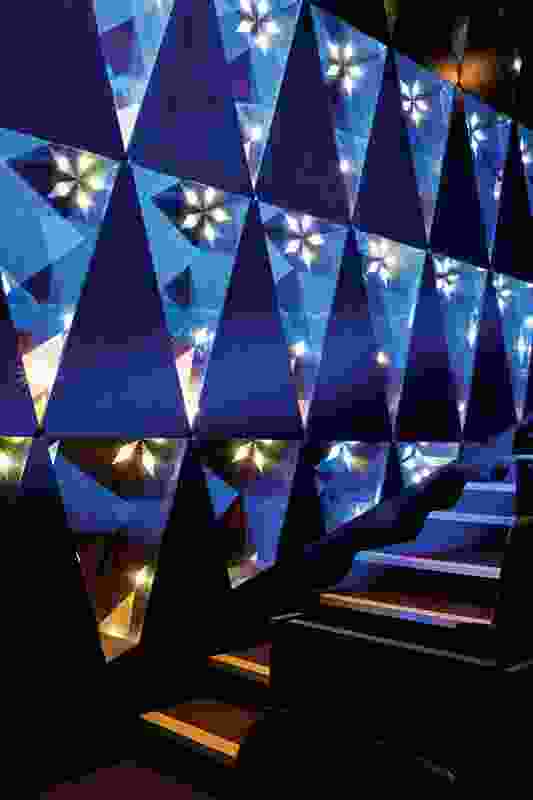 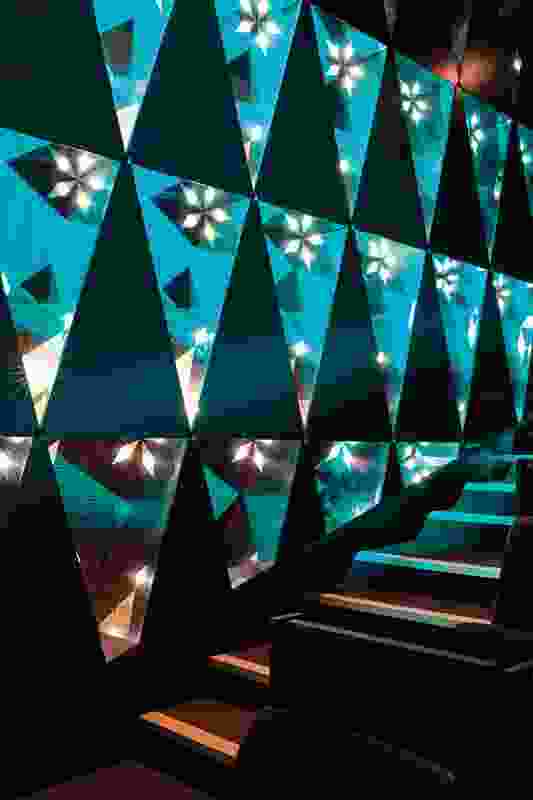 The auditorium side walls are covered by a crystalline pattern, creating a series of triangles.