Deidre Brown honours the life and work of Rewi Thompson, an internationally renowned indigenous architect who has profoundly influenced a generation of New Zealand architects.

Rewi Michael Robert Thompson, architect and adjunct professor of architecture, was born in 1953 to Bobby and Mei Thompson. He was one of the first generation of “urban Māori” who were raised away from their tūrangawaewae and in the city, in his case Wellington, where his father worked as a bus driver.

Unlike many other young Māori people living in similar circumstances, Rewi and his older sister, Ngapine, maintained strong connections to their Ngāti Porou and Ngāti Raukawa whānau and marae. These experiences would become formative influences on his conception of architecture as being fundamentally concerned with land and people, and conviction that architecture could return identity and wellbeing to people suffering from cultural estrangement.

Rewi originally trained as an engineer at Wellington Polytechnic and, for a short time, worked as a structural draughtsperson at Structon Group before leaving to study architecture at the University of Auckland. Fellow students fondly recall him arriving equipped with a set of highlighter pens and wearing jandals.

His exceptional talents became immediately apparent to staff and fellow students. David Mitchell, who was one of his earliest design tutors, recalled that one of Rewi’s first student projects was the design of “a bach on an exposed bush-clad site. All the students tried to tone their buildings in with the bush, all except for Rewi. He painted his bright pink and, boy, did it look good. It was a signal about the future.”

Mitchell would later include Rewi’s Ngāti Poneke Marae student project in his 1984 book The Elegant Shed as an example of how customary concepts could inform large-scale, urban, contemporary building proposals.

In 1983, after registration as an architect, Rewi established his own practice. Three years later, his reputation was such that he joined Ian Athfield, John Blair and Roger Walker on a lecture tour of the United States.

His highly expressive formalism was articulated across a number of residential, commercial and institutional projects during the “boom” construction period that occurred between the 1984 election of the Lange Government and the building industry’s decline following the 1987 Stock Market Crash.

They included: the undulating terraced Wiri State Housing precinct, built as an urban papakāinga (village; 1986–89); the abstracted fish canopies that gave a Pacific identity to the otherwise bland Otara Town Centre (1987); and the dynamic Capital Discovery Place and City to Sea Bridge that reimagined the creation stories of Te Whanganui-a-Tara, also known today as Wellington (1988, 1990–94).

Rewi’s most notable project was his own home in Auckland’s Kohimarama (1985) with its distinctive ziggurat form based on the Māori poutama (or stairway to heaven) tukutuku pattern. Bill McKay recalls Thom Mayne, founder of Morphosis, describing it as the only uniquely distinctive building in New Zealand. Another important, but unrealized, project was the shortlisted proposal for the new Museum of New Zealand building, undertaken with Ian Athfield and Frank Gehry.

Rewi believed that good architecture could, in his words, “improve” the land through responding to its rhythms, forms, scale, stories and needs, a philosophy that found expression in many of his later residential projects and, perhaps more influentially, through his teaching.

For him, the land was not just a surface, nor the sea a boundary, nor the sky a backdrop. It begged to be investigated through architectural investigation, as seen in the layers of land/sky/cloud cladding on the Pukanga Māori Studies building at Unitec (Auckland, 1991), and through excavation, which he once (controversially) described as a form of moko (tattoo) for the ‘Ngawha’ Northland Regional Corrections Facility site (Northland, 2005).

His consultancy for the Department of Corrections enabled Rewi to realize his belief that architecture could heal the wairua (spirit) and mauri (life force) of people broken by their circumstances. In the Ngawha project, Rewi advocated for porches facing significant landscape features to enable inmates to reconnect with ancestral places of belonging and look ahead to life outside of prison.

In the Mason Forensic Mental Health Clinic Extension project (Auckland, 1998), he and others successfully advocated for the inclusion of large, open foyers to accommodate pōwhiri (Māori welcome rituals), kaumātua (elder) rooms and marae as a means to include whānau in the patient inmates’ rehabilitation.

When practice was quiet, Rewi would pour his energies into another form of architectural expression, studio teaching. He was appointed an adjunct professor at the University of Auckland’s School of Architecture and Planning in 2002, teaching design while also developing with colleagues a culturally responsive curriculum structure called Te Pare (The Threshold).

He developed his pedagogy to respond to the needs of students from all cultural backgrounds who wished to draw on their heritage in their design projects, encouraging them to investigate and understand sites through drawing, painting and model-making. The land, for him, was a font of great personal and collective truths and the architect’s role was to rediscover them.

He also championed the contribution of female, Māori and Pasifika students as co-tutors and practitioners. Rewi left us at a time when his professional career was once again blooming. He had recently joined Isthmus Group, where he delighted in practising with others who shared his vision of the centrality of land and people to design. He was regularly receiving invitations to deliver keynote addresses at important industry conferences and to judge competitions. His students and recent graduates were flourishing in their studies and careers.

Bringing him the most joy of all was the return of his beloved daughter, Lucy, to Auckland just weeks before he unexpectedly passed away. Rewi Thompson will be remembered as one of New Zealand’s leading architects and an internationally renowned indigenous architect. Although sadly missed, he leaves us a kete (repository) of remarkable buildings, influential graduates and profound ideas. 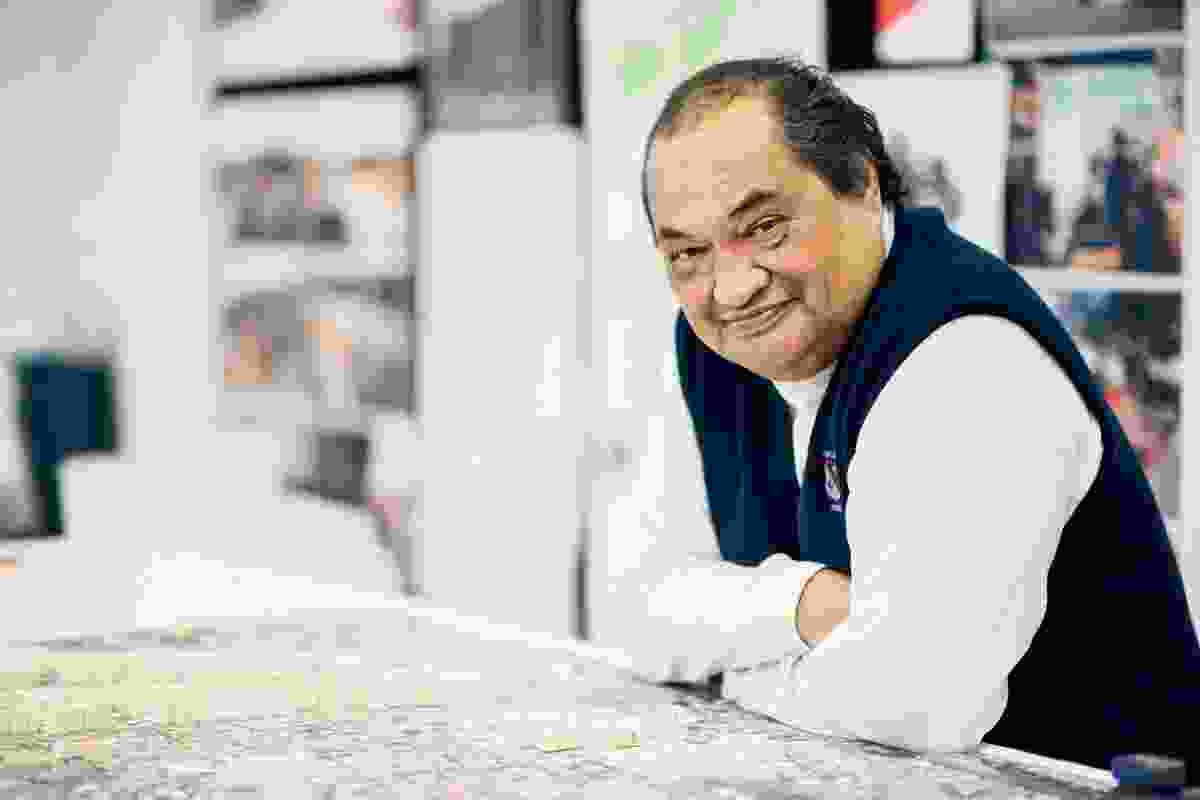 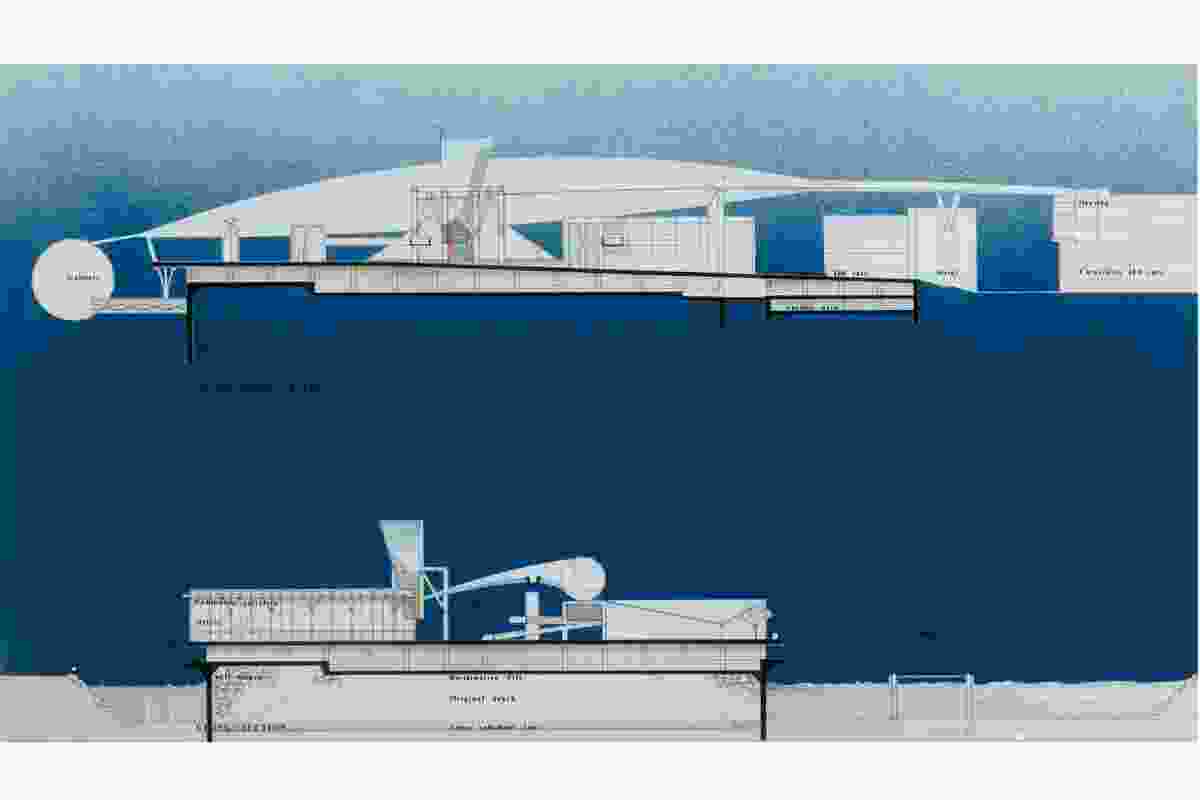 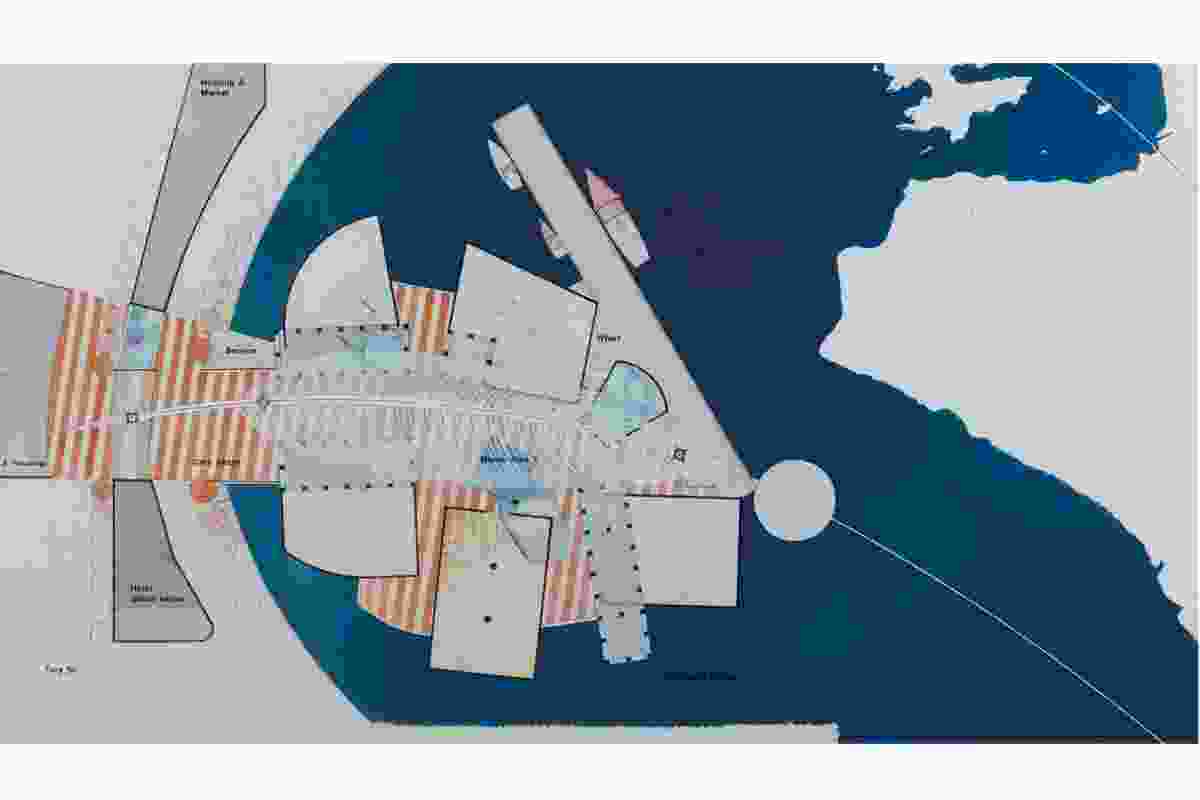 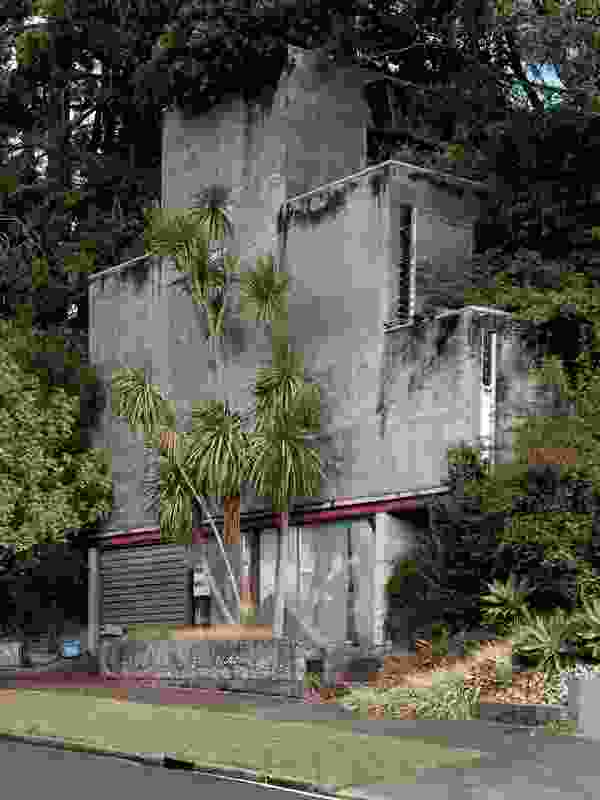 Rewi’s own home in Kohimarama, Auckland (1985), with its distinctive ziggurat form based on the Māori poutama (or stairway to heaven) tukutuku pattern. 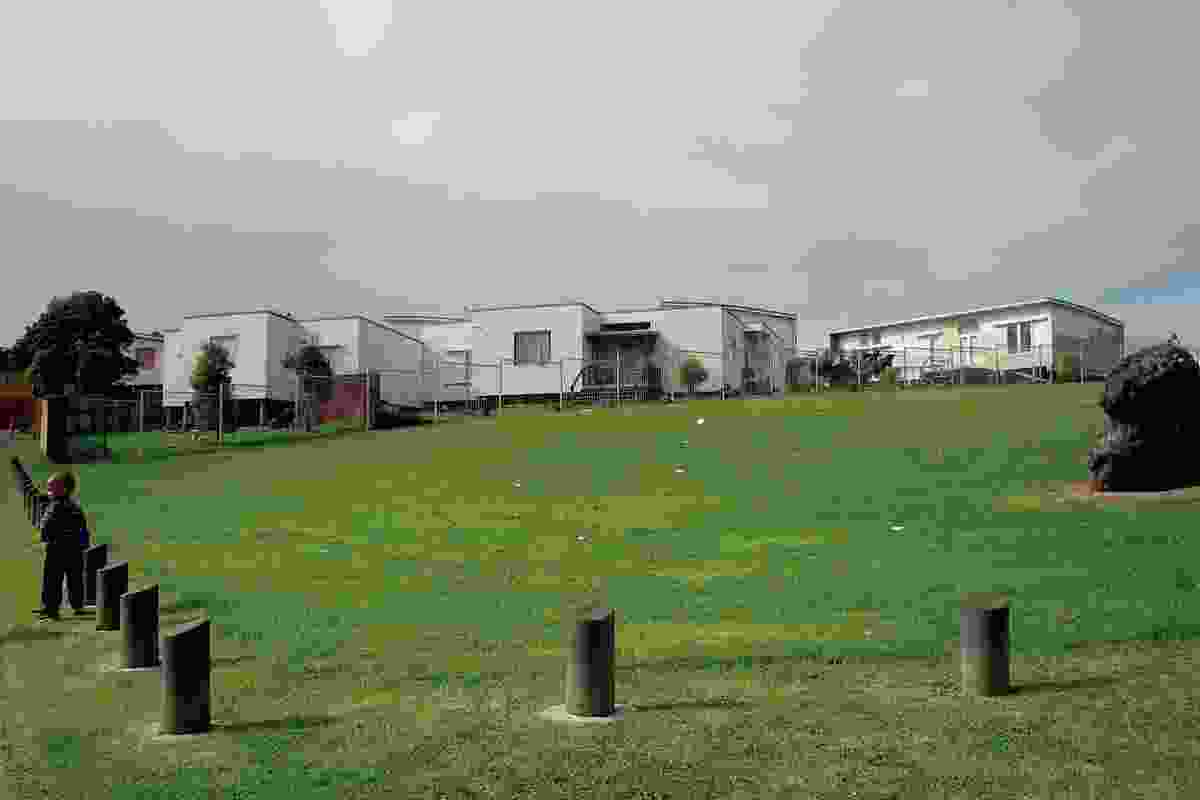 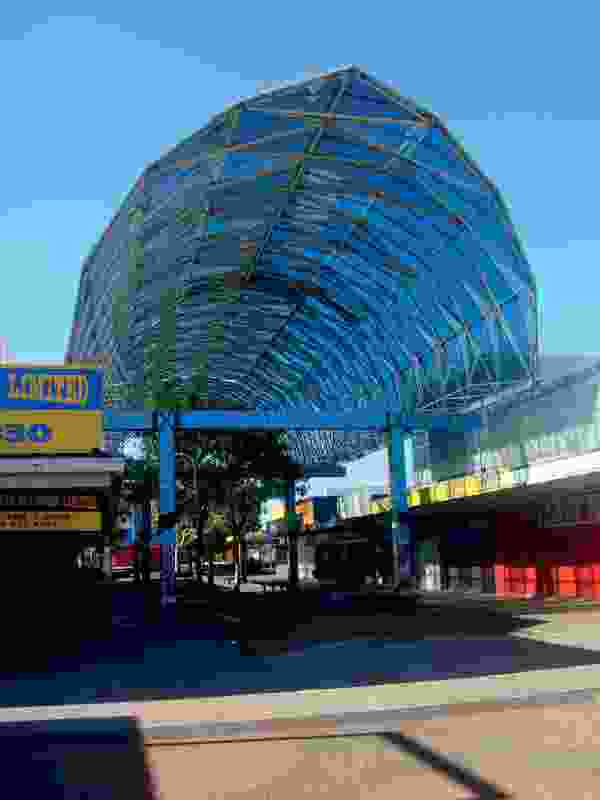 The abstracted fish canopies that gave a Pacific identity to the otherwise bland Otara Town Centre (1987). 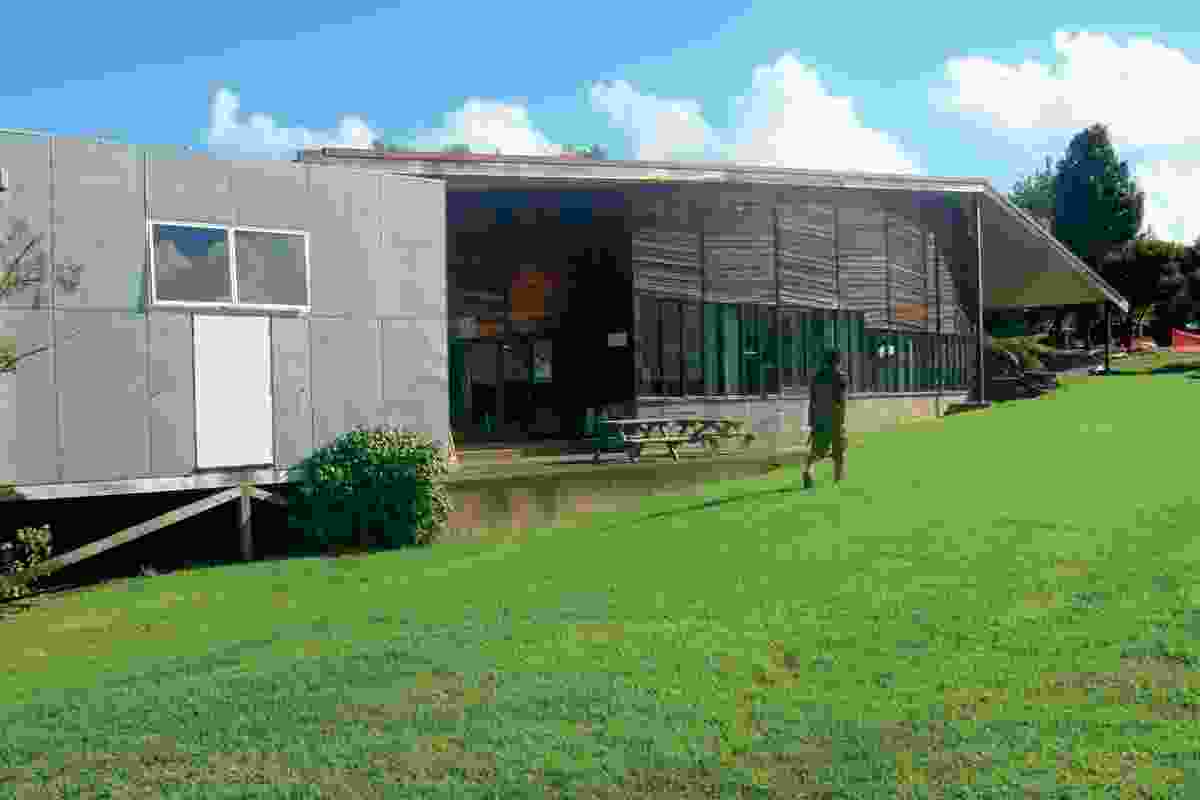