The streetfront of the Omaha beach house.

Perched on the estuary side of Omaha, a seaside suburb an hour’s drive from Auckland, is the perfect antidote to the chaos of city living; a sleek, contemporary family holiday home.

It belongs to the extended Bailey family. When they purchased the 700m² property in 2005, there was a monolithic, 1980s’ house on it. The owners agreed that, eventually, a renovation would be in order and that they needed to add to the floorplan if everyone was to fit in the house. But in 2011, when the Baileys asked Crosson Clarke Carnachan Architects (CCCA) to redesign the home, they realised that the cost of what they wanted to do would be close to that of starting fresh.

The Baileys’ brief was simple: they required spaces that utilised the property’s estuary-side location and was big enough to accommodate fourteen extended family members on occasions such as Christmas and Easter. “We wanted a house with plenty of outdoor living areas,” says one of the owners, David Bailey, 39.

The resulting home is a 230m², five-bedroomed residence made up of four interconnected boxes with more than 100m² of Kwila timber decking.

“It’s a sophisticated bach. It’s not too big and it’s not too small,” says Paul Clarke, the CCCA architect who designed the home.

Like all of Clarke’s projects, this low-lying, two-storeyed dwelling carefully considers its context, one the Auckland-based architect understands well after designing two other houses in the area. “Looking out onto the landscape [from the house], you pick up the dark tones of the hills, the sand and the sand bars and I’ve reflected this in the material palette used,” he says.

Dark cedar and black Colorsteel cladding is softened by palm trees and light concrete edgings, as well as the two pillar-like chimneys of the home’s outdoor fireplaces. From the street, the line of sight leads down a narrow pathway, through the front courtyard and the kitchen and over to the estuary on the other side of the house.

With an east-to-west orientation and height-in-relation-to-boundary rules to work around, the challenge for Clarke was to utilise the sun, the space and the water view. The front courtyard – bordered by bamboo, jasmine, ferns and palm trees and sheltered thanks to slatted roofs which also provide filtered light – has plenty of room for children to play and for the adults to drink their coffee and soak up the morning sun. The main, large deck on the west side of the home, on the other hand, catches the afternoon sun.

“The house operates like a stage set; in the morning, you start at the front of the house and you work towards the back, which is about entertaining and socializing. The heart of the house is centred around the kitchen and the dining area,” explains Clarke.

The interior is made up of four zones, each of which can be shut off if it is unoccupied. The first zone, the open-plan kitchen and living area, features a warm yet pared-back aesthetic with American oak flooring and white walls. The estuary views are maximized with floor-to-ceiling windows and doors. Timber cabinetry with an integrated fireplace acts as a feature wall, obscuring the television and storage space from plain sight. Furniture introduces pops of colour throughout the room, while in the kitchen area, a generous island defines the cooking space and high, north-facing windows allow sunlight to stream in throughout the day.

Off the main living area is the second zone, the master bedroom, which Bailey’s parents inhabit when they visit. With white walls and soft grey carpet, the room deflects attention towards the view to the west.

The street side of the house is what Clarke calls the “break out zone”, with a four-bed bunkroom for the kids, a double bedroom, a bathroom and a transitional living space in which the children can play and watch television. Upstairs is the fourth zone, which features a bathroom and two generous double bedrooms with a balcony overlooking the water and the home’s neighbouring tennis courts.

The Baileys spend their time in Omaha, which is part of Rodney district, waterskiing, wakeboarding, swimming and entertaining, so it’s not surprising they use the west, estuary-side deck most. The adults can watch the children playing on the grass or hunting for crabs in the estuary. Retractable awnings provide shelter from the elements but, if the wind picks up on the west side of the house, the family can migrate to the front courtyard.

“We can move around to suit the sun or wind and I love being able to light the outdoor fires once the sun starts to go down,” says Bailey, who lives in Auckland and owns a water tank business.

That’s the great thing about the house – the ease of it, Clarke says: “They can drift away to do their own thing. It’s low maintenance – I think that’s what’s really important about having a holiday house. The clients aren’t bound to it. They can just mow the lawns, sweep it out and they’re done.” 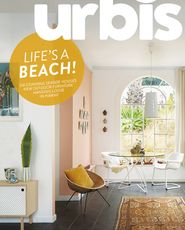 The streetfront of the Omaha beach house. 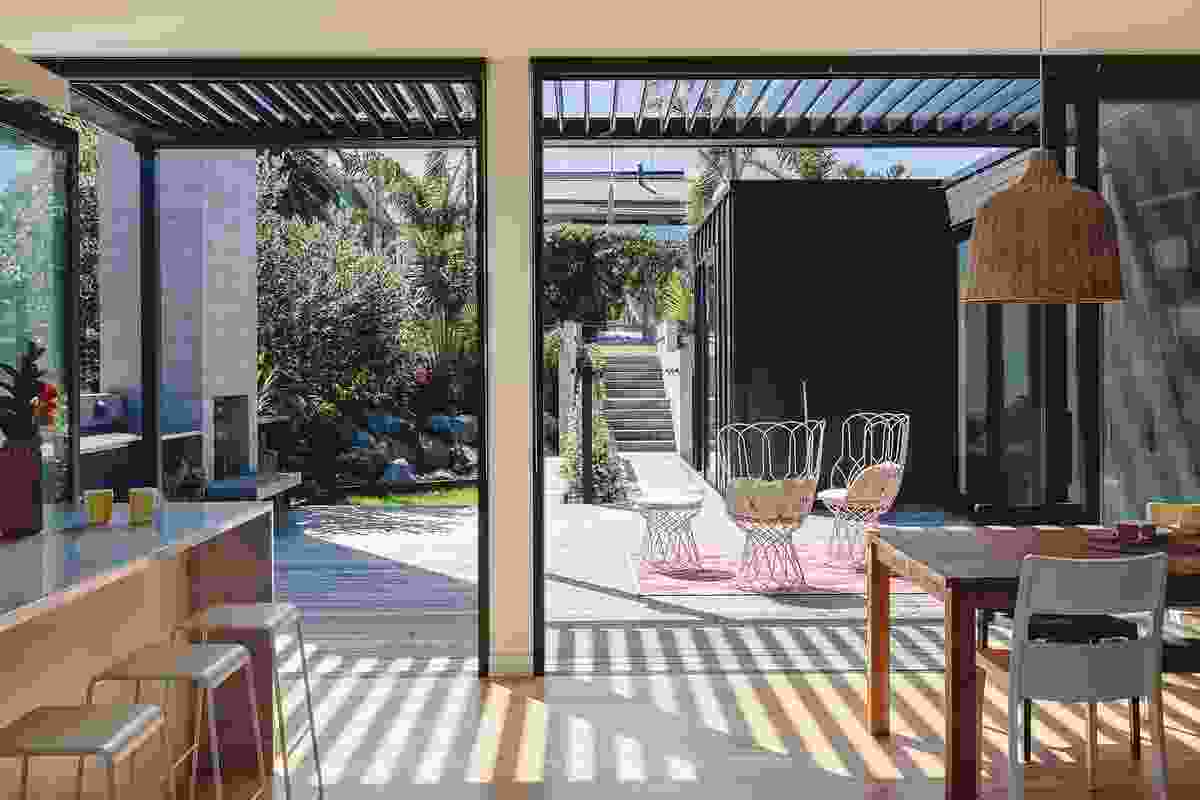 The front deck, with furniture from ECC and a rug from The Ivy House. 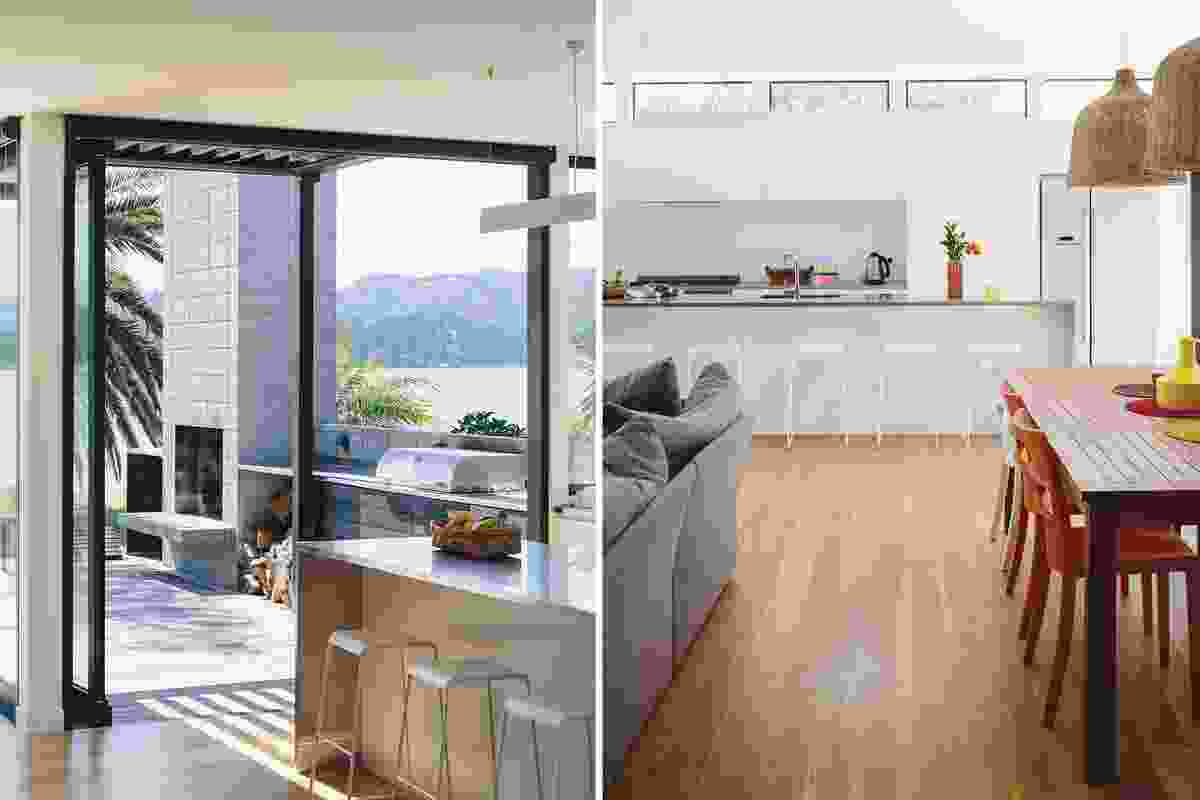 The kitchen opens up to both the front and back outdoor areas. 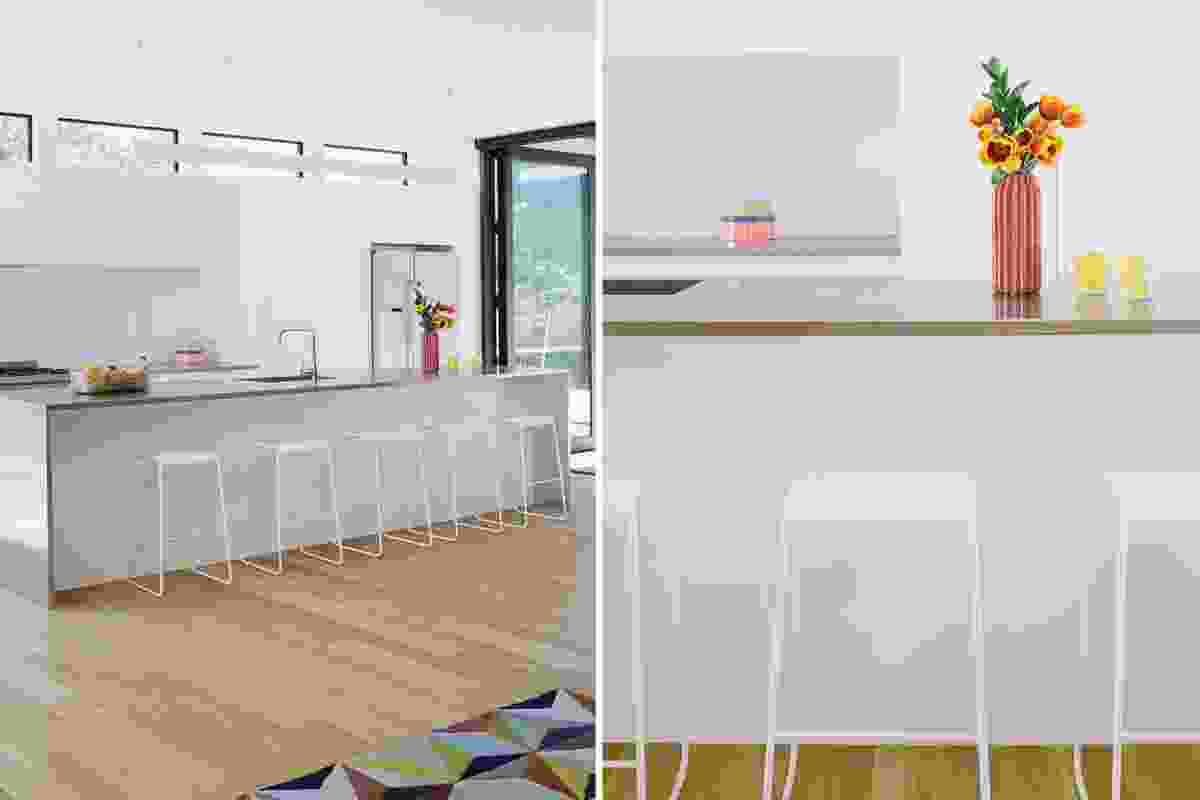 The kitchen is open to the dining and lounging areas. 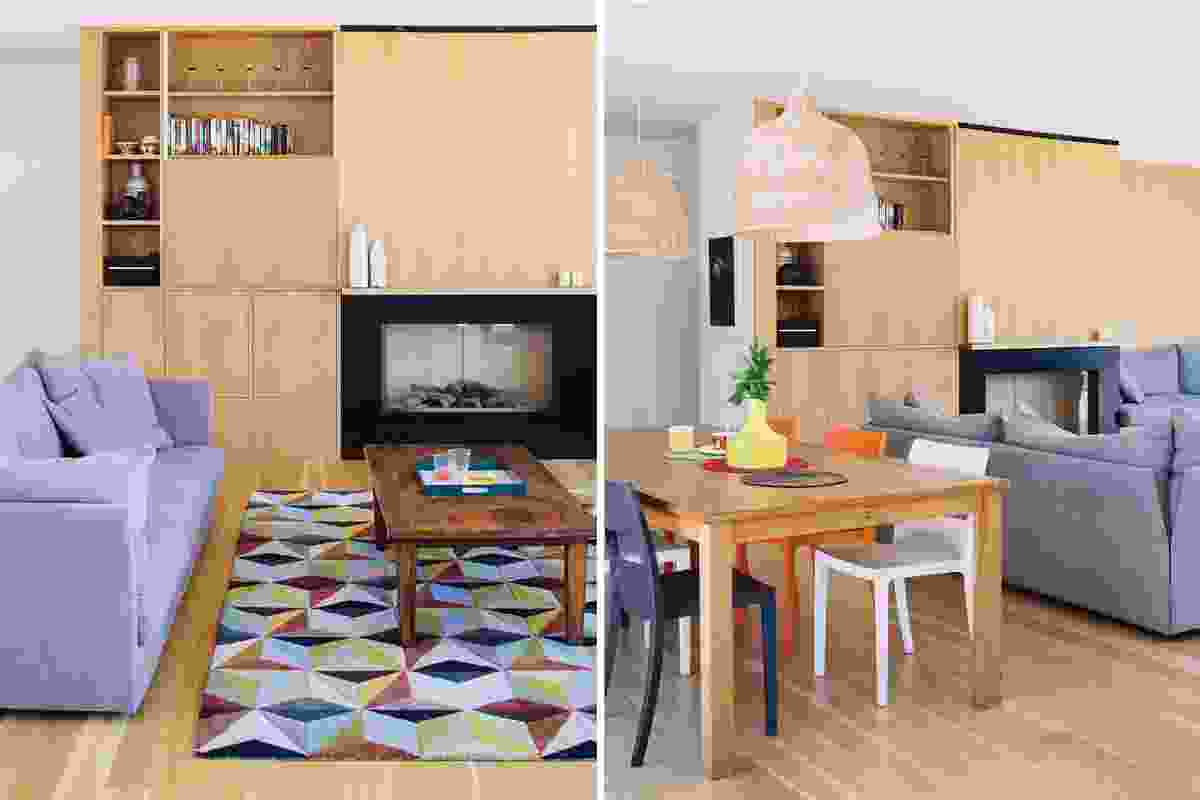 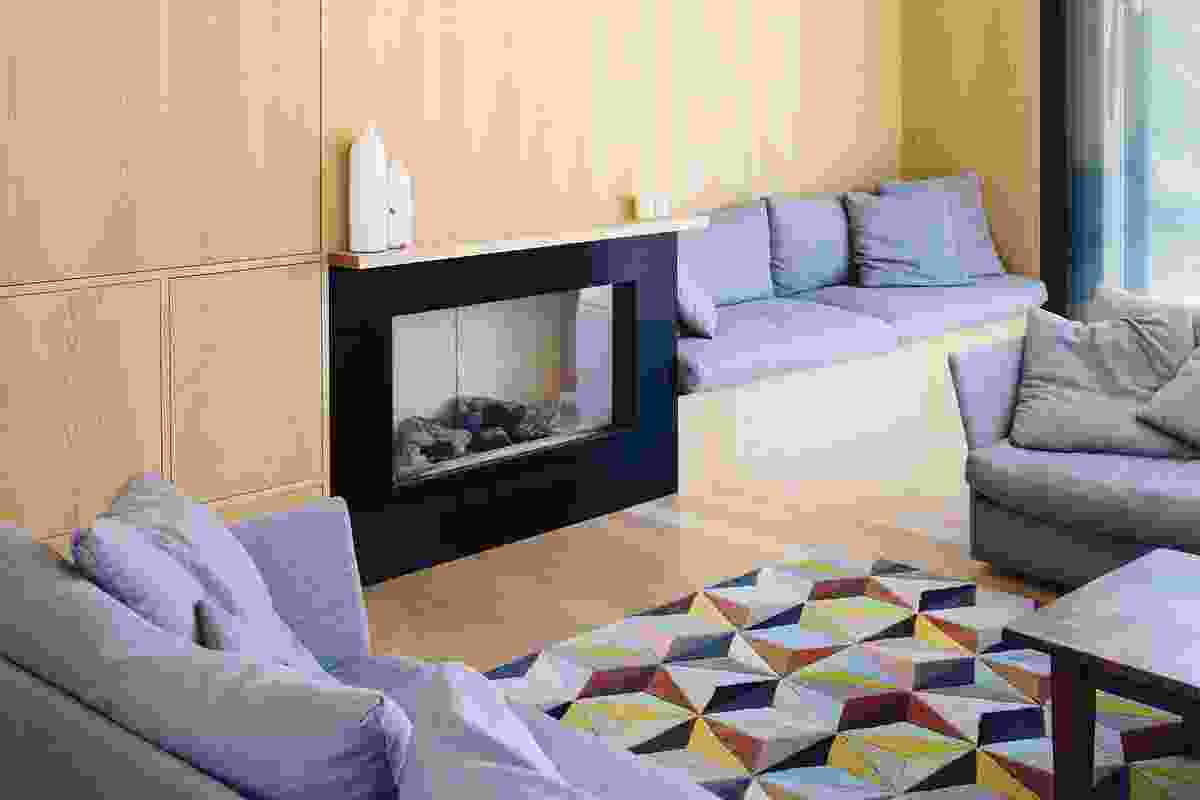 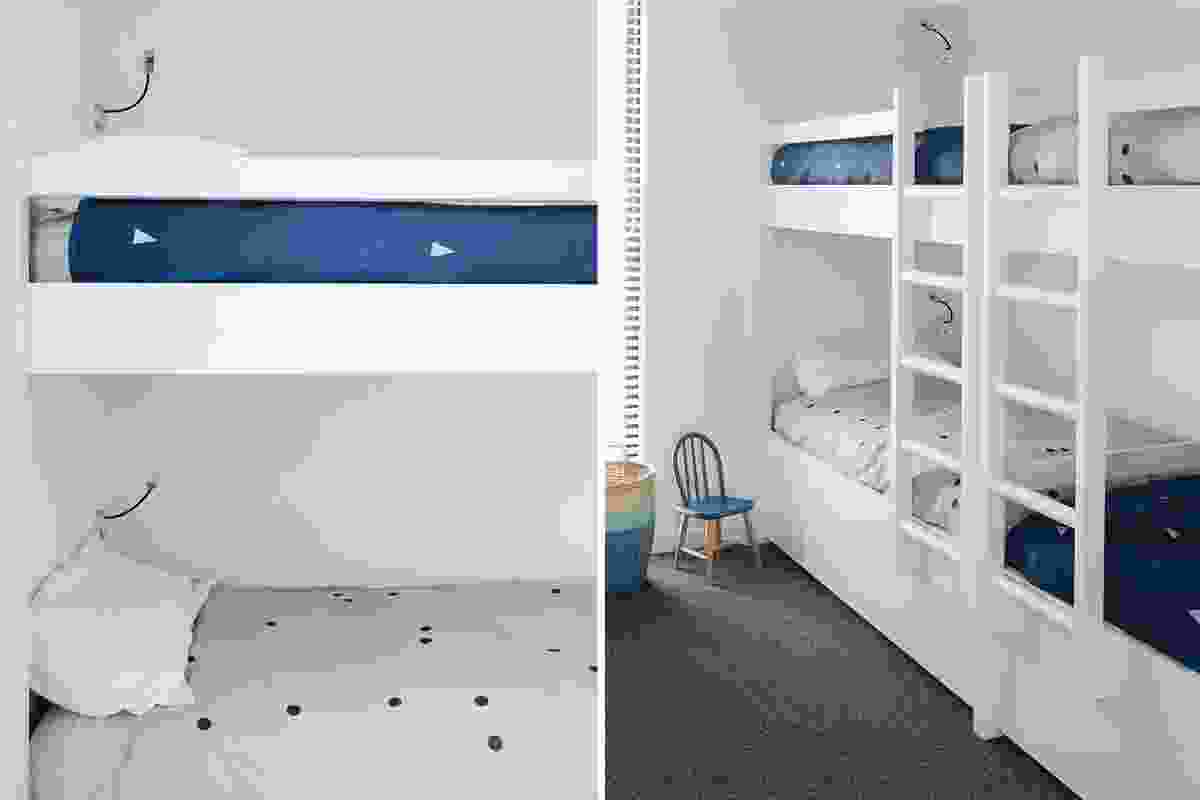 The bunk room at the front of the house features furnishings from Corso de’ Fiori and bedding from Father Rabbit. 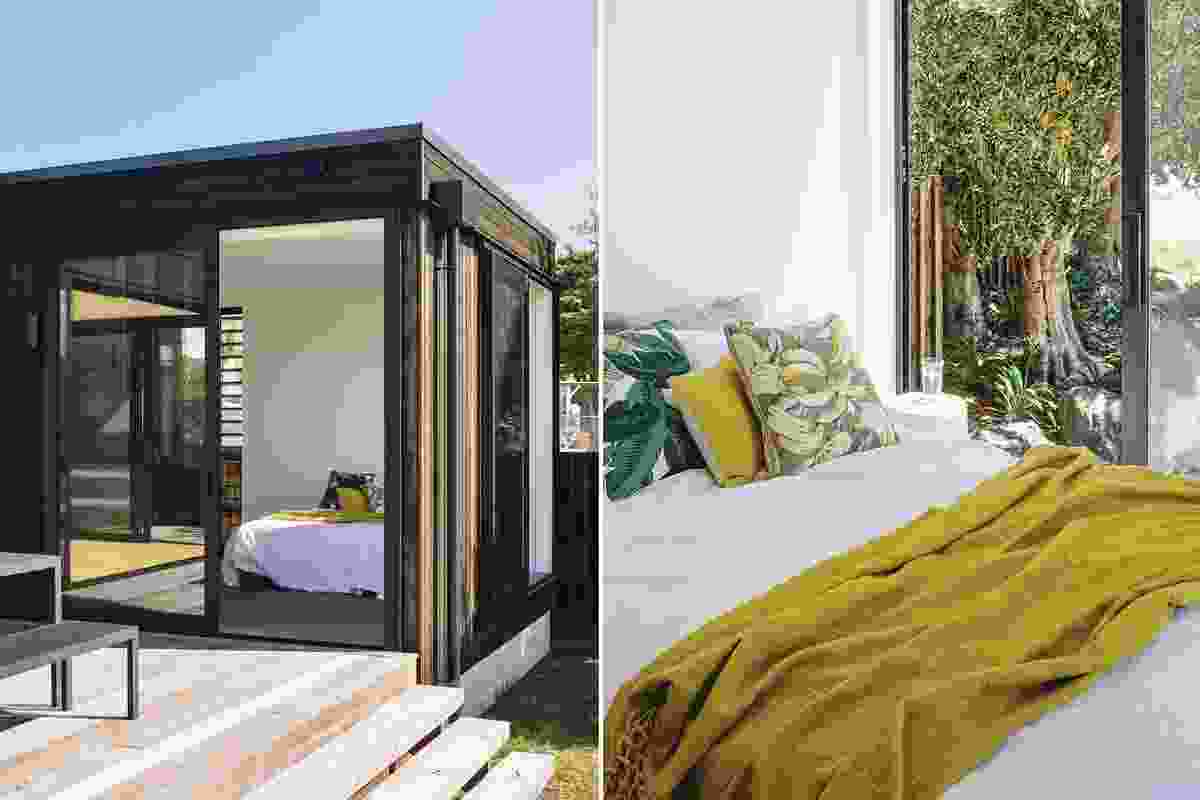 The master bedroom, dressed with cushions from Superette and Citta Design and linen from Indie Home Collective, has a view of the estuary. 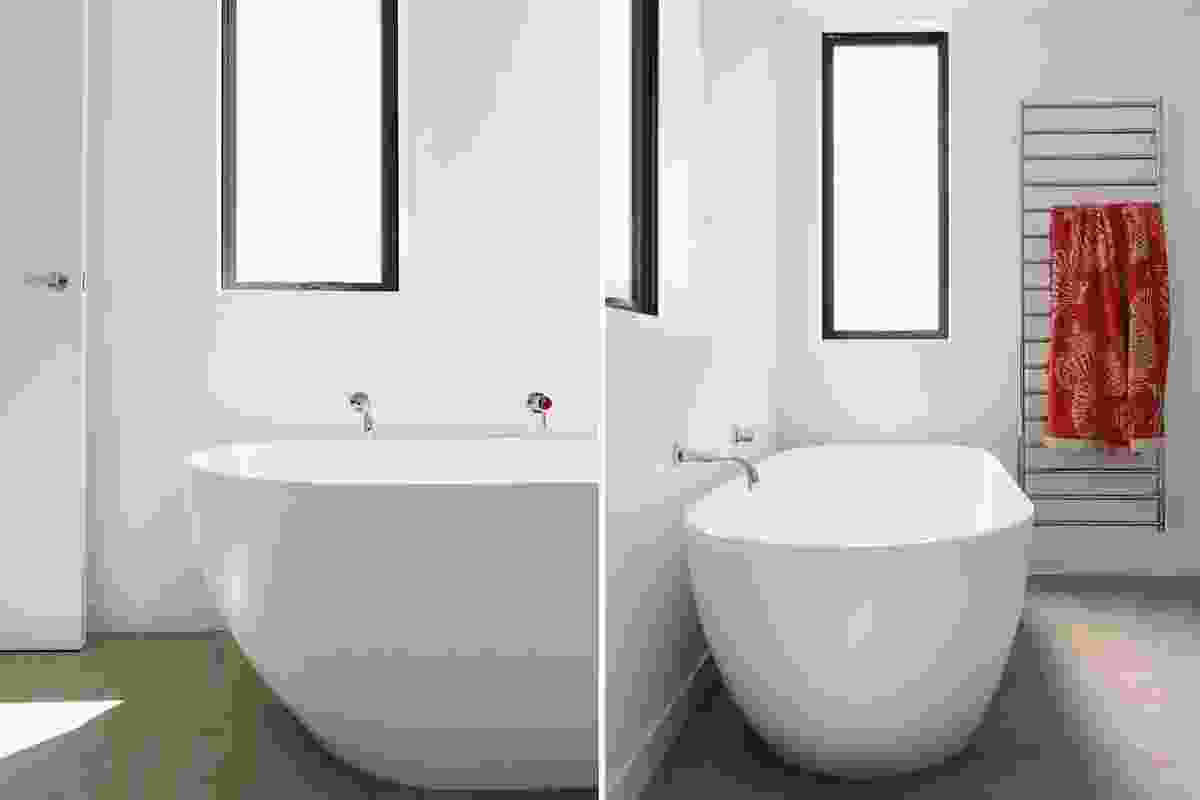 An upstairs bathroom has a bath by VCBC. 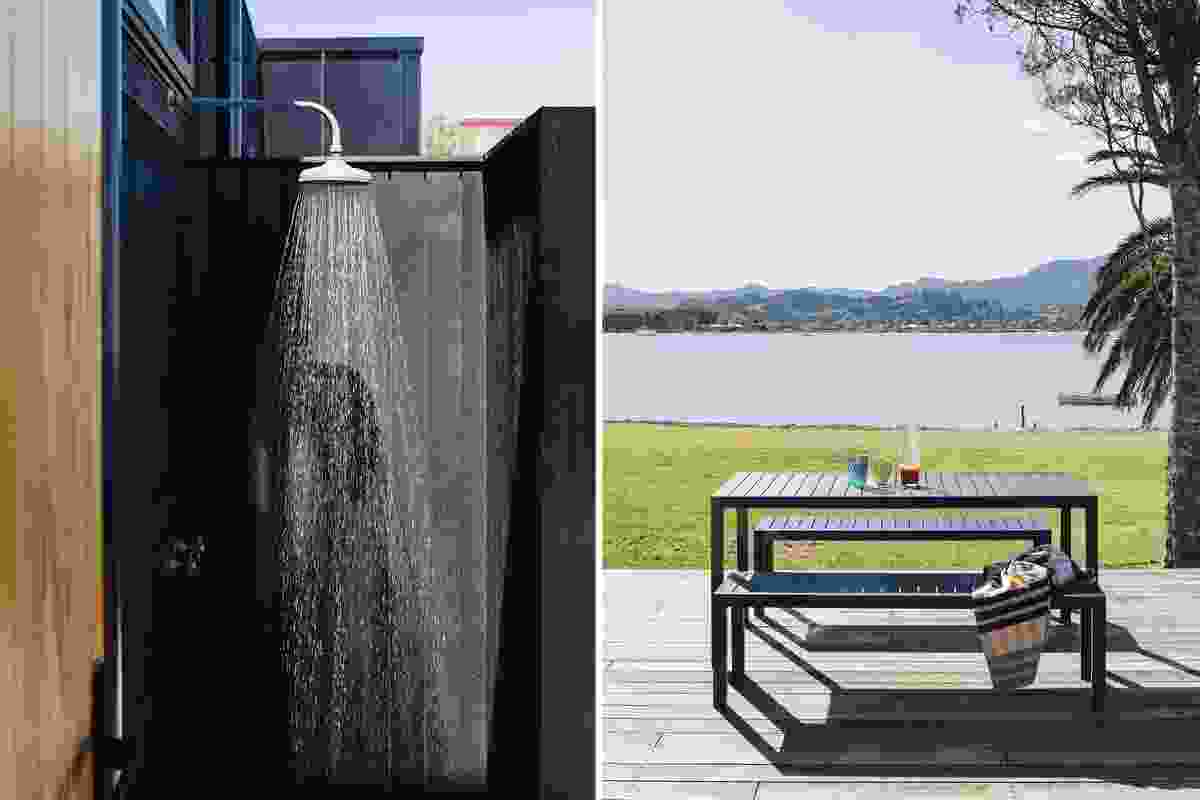 The view from the back deck and the home’s private outdoor shower. 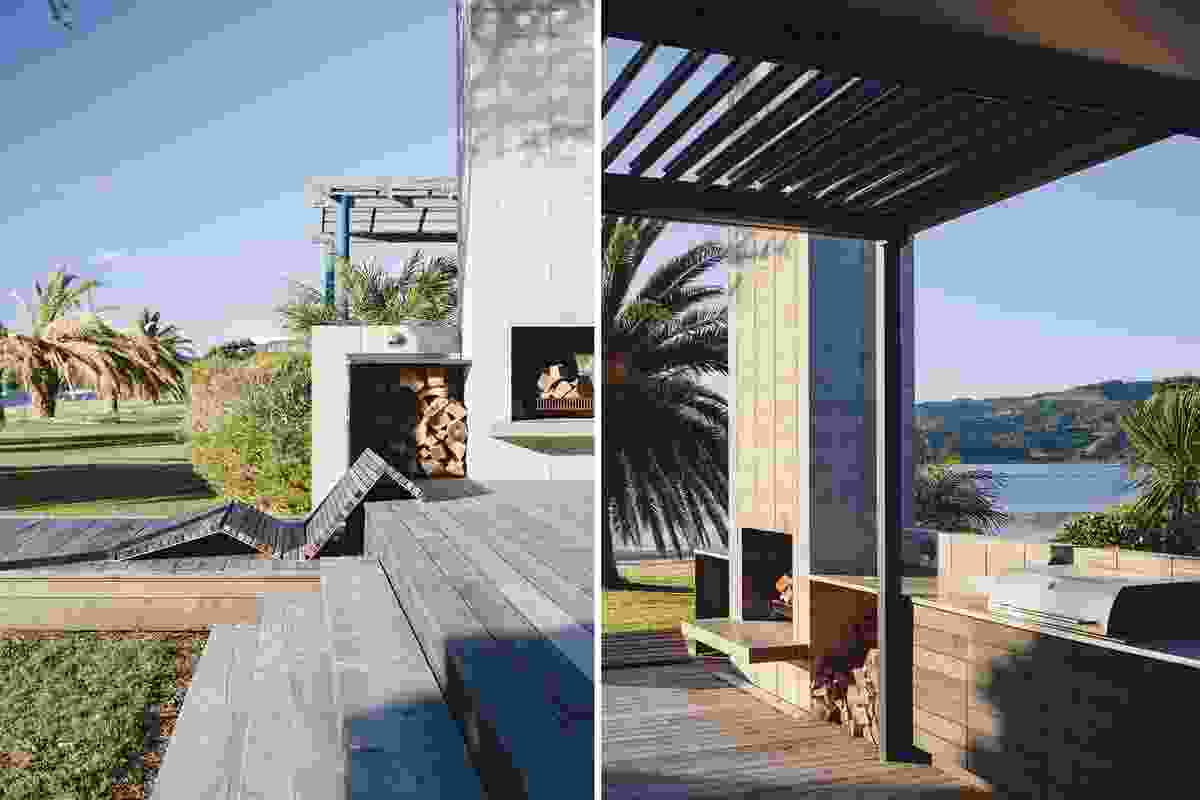 The deck has a built-in barbecue and a chaise designed by the site’s landscape architect, Orson Waldock. 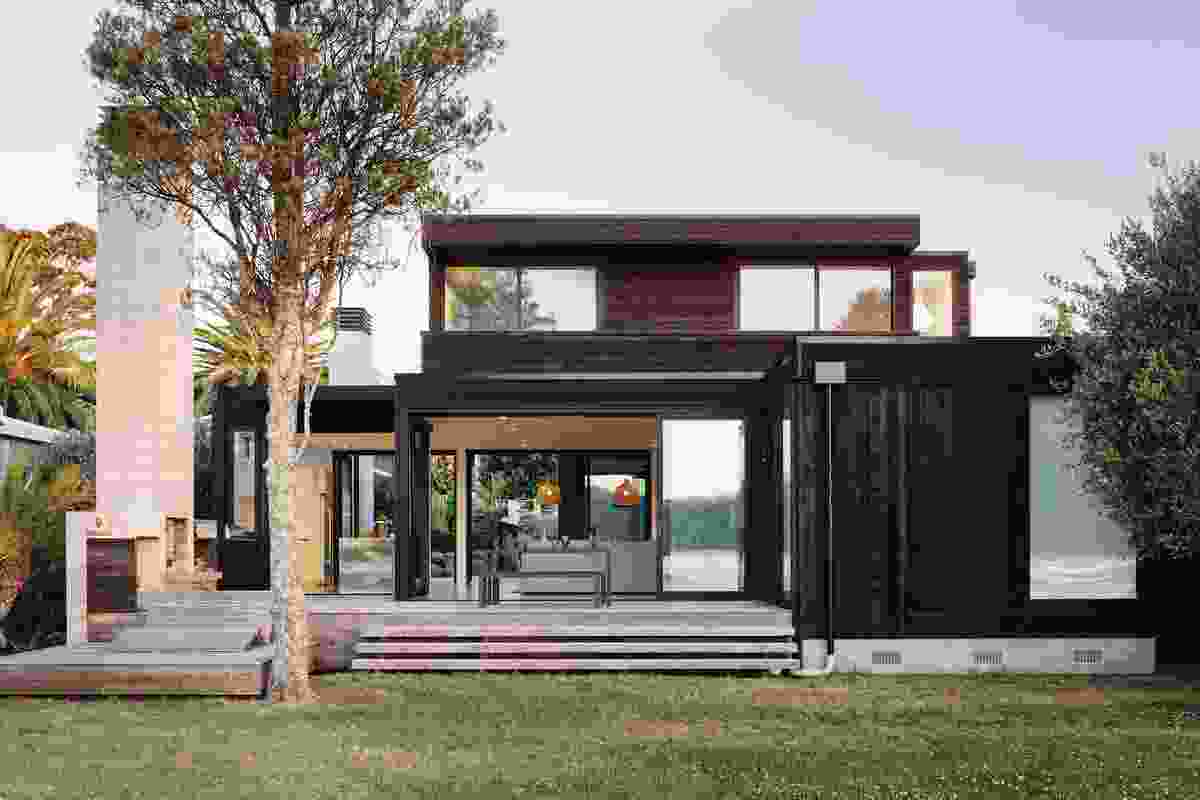 The house is clad with stained cedar and black Colorsteel. 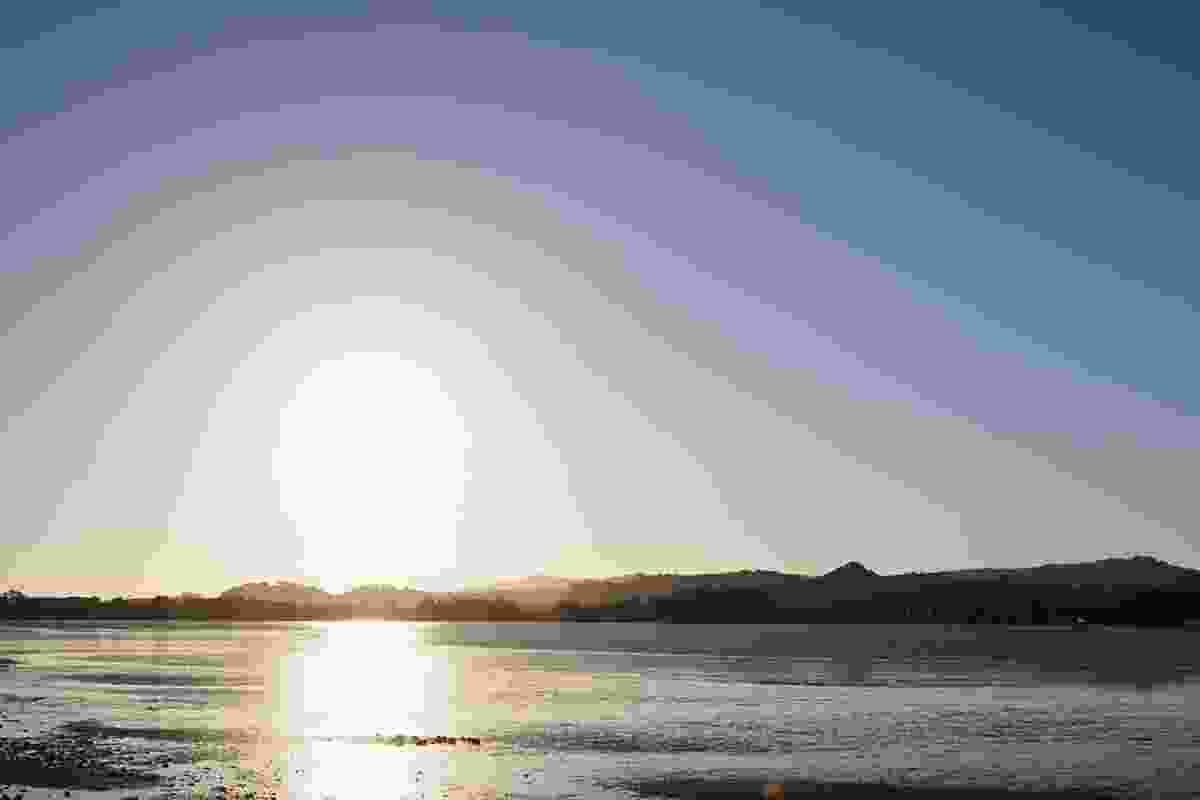 The view from the home’s west-facing deck.