Behind the bling, John de Manincor finds Sydney’s One Central Park by Ateliers Jean Nouvel and PTW Architects a compelling contribution to the city.

In 1988, American hip-hop group Public Enemy released its seminal song “Don’t Believe the Hype.” Well-known for its politically charged lyrics, the group was at the forefront of the New York hip-hop scene in the early 1980s.

Just as Public Enemy’s identity was shaped by social and political culture, so too has the recent history of Carlton and United Breweries’ Kent Brewery site in Chippendale on the fringe of the Sydney CBD been shaped by economics and politics. There has been a significant amount of hype and not a small dose of controversy over the redevelopment of the site since developer Australand purchased an option to buy it for $203 million in 2003.

The controversy began during the assessment of Australand’s development application. In 2004, Australand ran an invited competition for the masterplanning and architecture of the site, as required by the City of Sydney’s planning policies. Cox Richardson in association with Tzannes Associates won the competition over Ashton Raggatt McDougall (ARM), Bates Smart, Francis-Jones Morehen Thorp (fjmt) and Hassell. In Sydney, however, holding a design excellence competition and appointing a winner does not guarantee development approval. The Cox–Tzannes scheme that was submitted fell foul of the City’s ambitions for the site and attracted a swathe of negative commentary from the community. By early 2005, Australand and the City of Sydney were at loggerheads and Australand withdrew from the project.

Fast forward to 2007 and the hype begins. Singaporean developer Frasers Property purchased the site for $208 million. Frasers chief executive Dr Stanley Quek’s sales pitch was: “What we want is to create a village that people can work and play in. It’s [a place] for people who want to live in Glebe but can’t afford Glebe prices.”1 Meanwhile, changes in the New South Wales political climate saw the state government take over the authority to approve “state significant projects” from local councils. Thus in 2009 it was the state government that finally approved a new master scheme by Foster and Partners with more bells and whistles – larger floor area, more open space, trigeneration and five green stars. The masterplan included concepts for buildings designed by Foster and Partners, Johnson Pilton Walker (JPW), Tonkin Zulaikha Greer (TZG) and Tzannes Associates, as well as the site’s signature building: One Central Park designed by Ateliers Jean Nouvel (AJN).

The early soft-focus renderings of the AJN building showed two thickset towers, one taller than the other and both sporting Nouvel’s version of architectural bling: an array of audaciously cantilevered mirrors and “murs végétals” (hanging gardens/green walls) designed by Patrick Blanc. The images were met with a good deal of reservation, if not full-blown scepticism, from the architectural profession and, given the vexed history of the previous planning application, treated with trepidation by the local community. No-one quite believed the hype. I count myself among those who were cynical about the proposal at the time.

…as architects we rarely stop to consider the economic or political contexts that have created the buildings as we experience them. Nor do we ponder the processes through which they are procured … we are left to our own devices to dissect the makings of the edifice without the aid of a back beat.

Listening to “Don’t Believe the Hype” some years on, the lyrics are a reminder of how the mainstream media in the USA often portrayed African Americans during the 1980s. The political backdrop to a building’s procurement and development, however, is less accessible. Despite what we read and study about a building’s recent or long-term history, as architects we rarely stop to consider the economic or political contexts that have created the buildings as we experience them. Nor do we ponder the processes through which they are procured: we experience only the artefact or, increasingly, an image of the artefact, and we are left to our own devices to dissect the makings of the edifice without the aid of a back beat.

There are a few common questions on many observers’ lips when examining One Central Park as an edifice and assessing its contribution to the city. Many of these focus on the building’s bling: How long will the plants live? What happens if or when they die? What’s it like living under the mirrors? And do they work? Mark Giles and Matthew Dodds from PTW Architects – AJN’s local collaborator – offer some interesting insights. Maintenance of the external planting, which covers nearly 50 percent of the facade, is managed by the body corporate. “The plants will live as long as the residents want them to,” says Dodds. So, if the owners collectively decide it’s all too hard and costing too much, they can vote to remove the plants. Giles notes that the New South Wales Department of Planning and Infrastructure was not convinced by the developers’ and architects’ spin on the planting and insisted on seeing images of the project sans shrubs. During construction and prior to the addition of the plants, the relief provided by the irregular orthogonal planes of the balconies provided a compelling composition. Watered by the site’s blackwater recycling infrastructure, the plants have survived two Sydney summers and now make a unique contribution to the city. Though the building may not “need” the plants, I suggest they will remain in place for some time.

And so to that shiny medallion One Central Park wears so proudly: its mirrors. The mirrors were included to alleviate concerns of overshadowing the site’s own and the city’s public domain. The heliostat on the roof of the lower, western tower comprises an arrangement of forty mirrors which track the sun’s path and reflect light up to a second series of mirrors fixed to a structure cantilevered thirty-three metres off the taller, eastern tower. Light then bounces back down between the two towers to the external pool/recreation area and through the atrium roof into the retail shopping area. On the days I visited the site, I was aware of the glow of the mirrors in the park below. Obviously, it is a slightly odd experience to be in the apartments directly under the mirrors – perhaps those who live there do so for that very experience. The mirrors, though, do not reflect light into any dwelling; without them, 70 percent of dwellings receive the minimum three hours of direct sunlight between 9 am and 3 pm midwinter required by state planning controls. At night, the space between the towers takes on a variety of coloured hues – illuminated by the 2880 coloured, programmable LED lights that make up Yann Kersalé’s artwork Sea Mirror. This cinematic, Blade Runner-esque space is almost a public one; it can’t be accessed physically but it falls under the constant gaze of passers-by. Surely it will only be a matter of time before One Central Park features in a blockbuster movie with a next-generation Tom Cruise abseiling off the cantilevered structure and crashing through the glazed roof of the retail podium.

Like many young hip-hop artists, One Central Park’s bling is a little distracting at first but absolutely necessary to its identity. When Frasers Property purchased the site in 2007, Dr Quek said, “We will make sure it is as green as possible.”2 The developer has delivered on the hype, with a building that has achieved a 5 Star Green Star rating for multi-unit residential design. “Don’t Believe the Hype” reached number 18 on the USA R&B charts and number 18 on the UK Singles Charts. I put One Central Park in the Top 10 buildings for 2014, but then again, maybe you won’t believe the hype.

One Central Park won Development of the Year at the 2014 Urban Taskforce Development Excellence Awards as well as receiving a commendation by Australian Institute of Architects for multiple housing at 2014 NSW Architecture Awards. 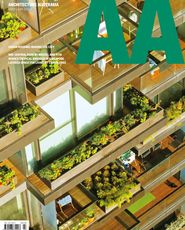 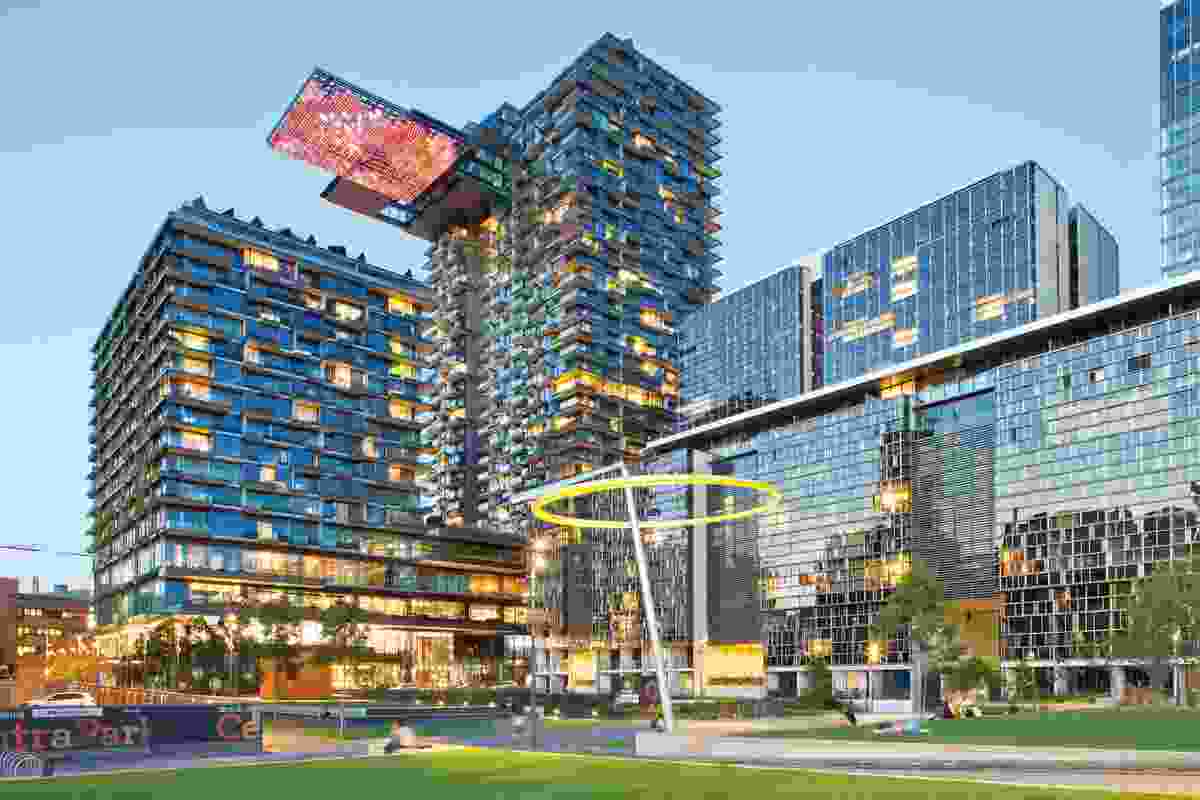 The north-west corner of One Central Park, viewed from Broadway. 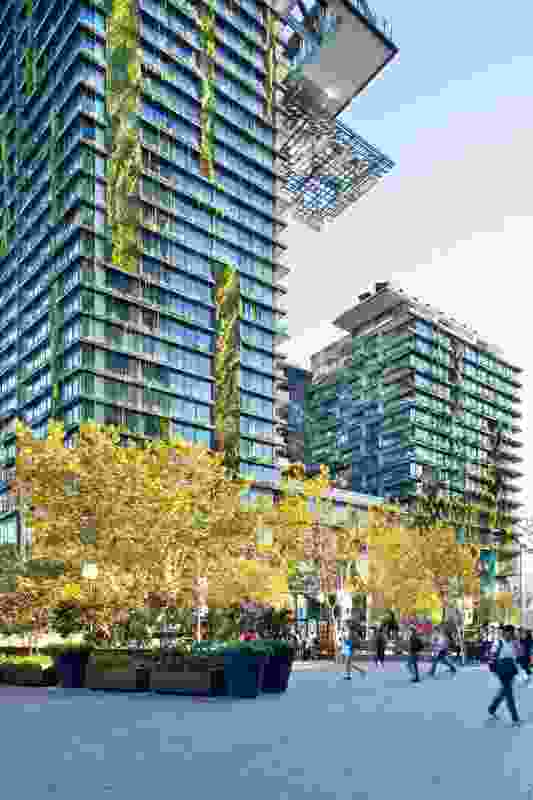 Forty sun-tracking heliostat mirrors on the roof of the west tower direct light up to the mirrors mounted on the cantilever, which then direct sunlight down into the podium below. 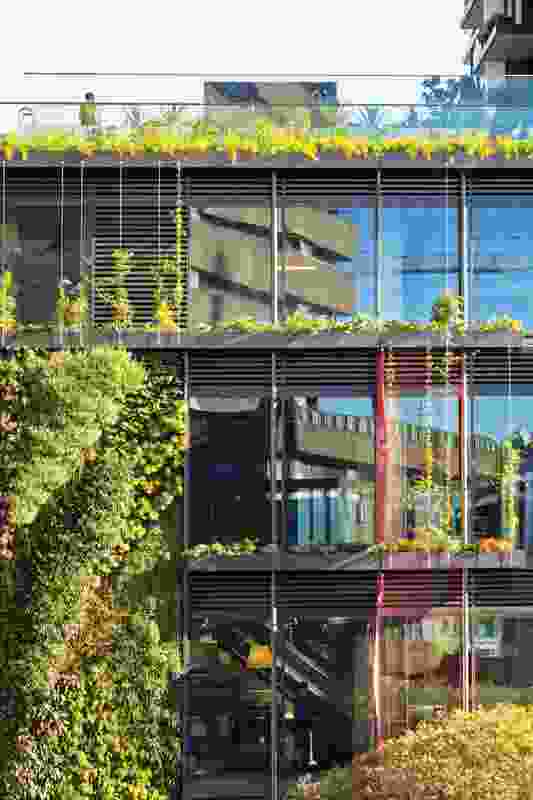 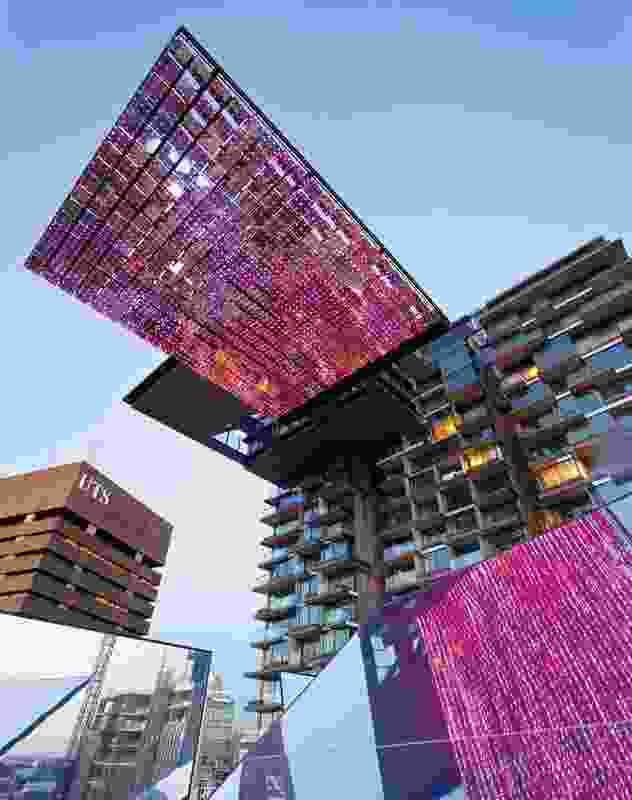 Sea Mirror by Yann Kersalé is a series of 2880 programmable, coloured LED lights that illuminate the site at night. 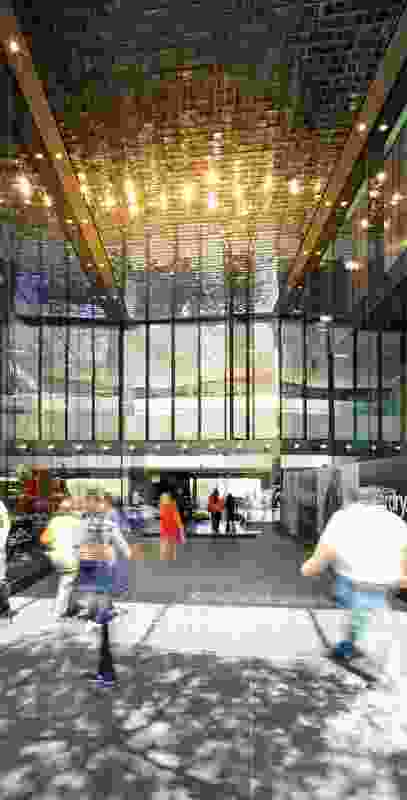 One Central Park’s sky garden, located on the twenty-ninth floor of the east tower. 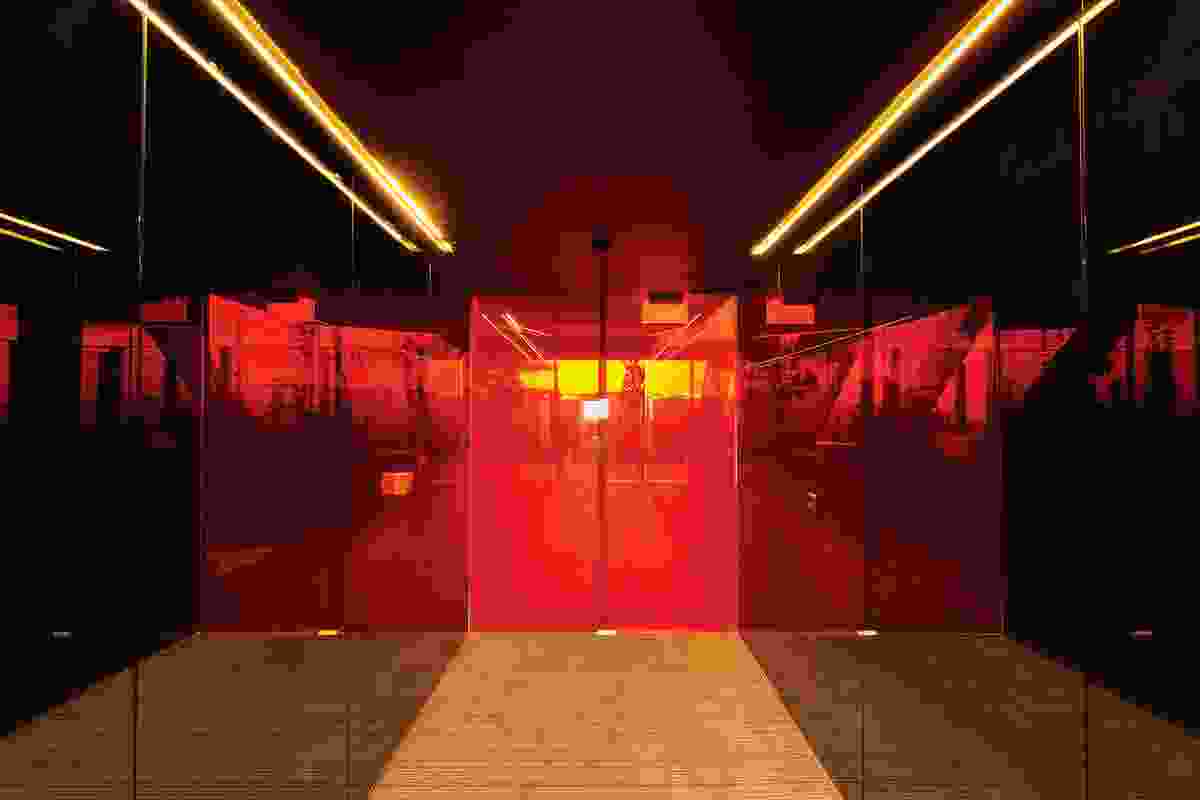 The dramatic entry to One Central Park’s sky garden, accessible only to penthouse residents.