Kinked geometries animate the building’s forms, inflecting towards the Metro station entry on the corner of Murray and William streets.

One40william in Perth tackles one of the challenges of the contemporary city: how to integrate a large-scale office and retail complex into the scale and texture of the city, heritage buildings and a transport station. It is rare to discuss urban design and the city when reviewing contemporary office developments. Typically conversations focus on issues of the new workplace, contiguous flexible space, connectivity and perhaps the facade system. One40william by Hassell addresses all of these criteria, while also being conceived as an urban response to the city.

Built over an underground Perth Metro station, also by Hassell, the complex was planned and architecturally expressed as a series of east–west linear “bars” across the site, which step and inflect in response to the surrounding scale and solar orientation. This initial articulation of the form reduces the overall scale of the building, allowing it to respond to and respect the scale of its context. Elaboration and articulation of the overall strategy further integrates the building with the city.

The northernmost bar, fronting Wellington Street, consists of existing heritage buildings, which have been restored and adapted by Lovell Chen into retail and office premises. This three-storey scale is carried around to the new buildings on the William Street frontage, respecting the scale of the heritage buildings on both sides of this street, in a move originally conceived in the urban design study associated with the railway station design.

The next three bars consist of eighteen-metre-wide office space interconnected by lift cores and bridges. These bars step down from the north to the south, ensuring solar access to the Murray Street Mall and, in Hassell’s words, “self-shading the lower facades.” The southernmost form continues the scale of the adjoining historic Commonwealth Bank building on Murray Street. Roof gardens have been created at each step, providing visual outlook and outdoor amenity for the office workers. Each bar has been subtly articulated and expressed differently to further reduce the scale of this 36,000-square-metre office and 7,000-square-metre retail complex. Kinked geometries animate the forms, inflecting towards the Metro station entry on the corner of Murray and William Streets. This geometry with differentiated facade treatment at times appears in danger of fragmenting the building into a series of disconnected parts that are “flying apart.” That the building hangs together, giving the impression of arrested movement, is part of its success. This has been achieved while maintaining a rational structural grid without any transfers.

The ground levels continue the theme of integrating the buildings into the finer grain of the city through the creation of a series of interconnected laneways. The two lower levels of retail are arranged around these laneways, which follow the formal logic of the building. The east–west building forms above establish the ground plane retail plan, creating a series of east–west laneways which reinterpret the original laneways on the site. The northernmost lane behind the heritage buildings links through to Forrest Place via an existing laneway. The middle laneway has been interpreted as the office lobby, accessible from both William Street and the internal laneway, while behind it a space known as Postal Place allows connection through the former Perth GPO to Forrest Place. A single north–south lane links the three east–west lanes connecting Murray Street Mall to a newly created square surrounded by heritage buildings on Wellington Street.

The laneways have created a fine-grained series of pedestrian-scaled retail spaces that successfully connect with the city fabric and defy the scale of the office building above. The interplay of two- and three-storey volumes has created a highly successful pedestrian experience and streetscape.

The articulation of the form to relate it to the city is reflected in the interior planning of the building. Separation into linear bars creates identity and neighbourhoods within the large and potentially anonymous, 3,500-square-metre, low-rise campus floor plates, as well as providing excellent perimeters for access to natural light. The upper floors’ two bars of space more closely resemble a typical back-to-back side core arrangement, with open contiguous floors on either side.

The building’s facades respond to their solar orientation with a system of horizontal and vertical sunshades. Horizontal sunshades protect the long northern elevation, while the shorter west end has three-storey vertical fins offset by three-storey naturally ventilated wintergardens. This creates a highly graphic pattern that animates the form while maintaining a human scale, as well as echoing the scale of heritage buildings through the tower. The lower forms have a bar-code-like pattern of vertical aluminium striations, which reduce the glazing area while echoing the masonry verticality of the adjoining Commonwealth Bank. The combination of this simple graphic pattern and the dark glass on these forms nearest the pedestrian level is one of the less successful strategies employed; however, this is more than offset by the sophistication and subtle patterning of the upper facades.

The success of this building is a reflection of the procurement process as well as the clients’ support for the architects. This process was created by the then WA Minister for Planning and Infrastructure, Alannah MacTiernan, and the then WA Government Architect, Geoffrey London, who in 2006 created a design competition for architect and developer teams. The WA State Government underwrote the process by committing initially to 24,000 square metres of space, and ultimately taking 36,000 square metres.

At a time when the issue of large contiguous floor plates is often used as a rationale by developers and architects alike to avoid integration with the scale of a city or neighbourhood, it is refreshing to see buildings that can navigate both requirements simultaneously. One40william demonstrates that office buildings with large contiguous floor plates can incorporate the demands of contemporary office planning, while also responding to the finer grain of the city fabric, and in so doing create a successful mix of uses that is invigorating the city of Perth. 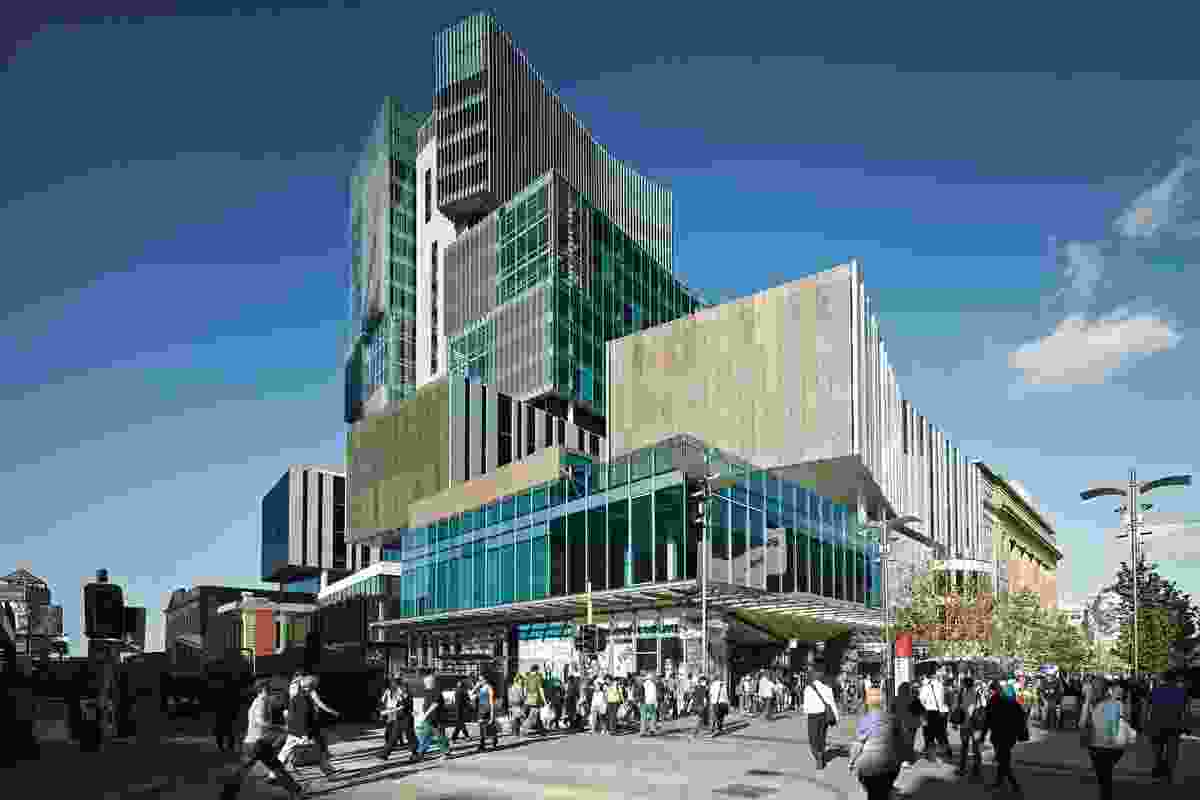 Kinked geometries animate the building’s forms, inflecting towards the Metro station entry on the corner of Murray and William streets. 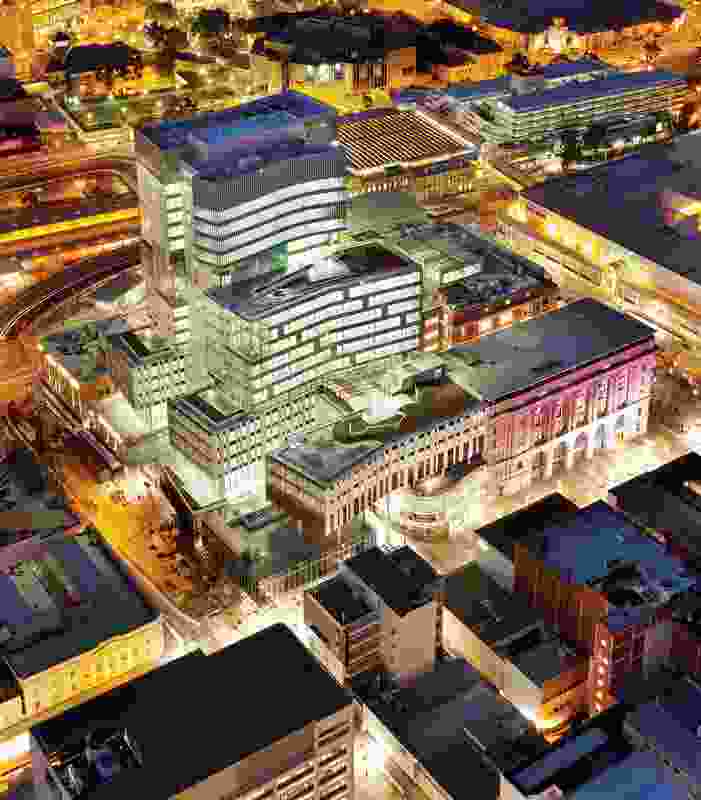 The building is expressed as a series of east–west linear “bars” across the site, which step and inflect in response to the surrounding scale and solar orientation. 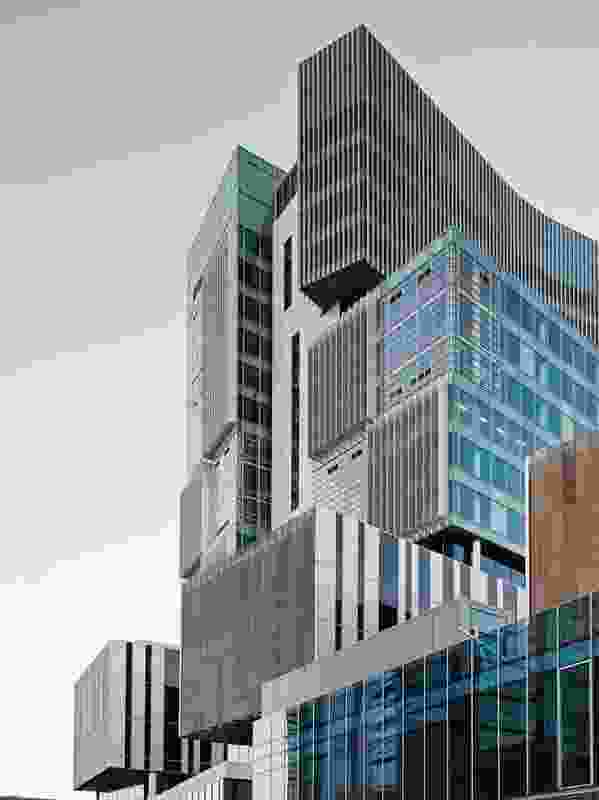 The three-storey scale is used for the buildings on the William Street frontage, respecting the scale of the heritage buildings on both sides of the street. 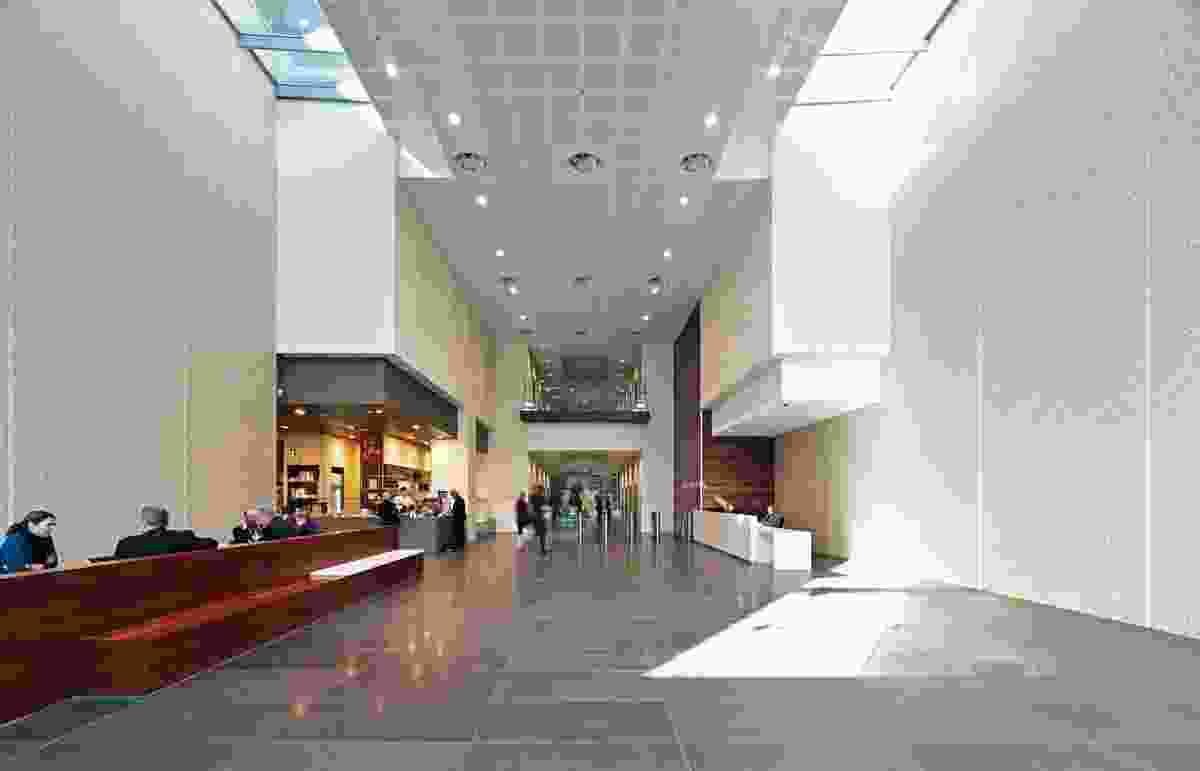 The middle laneway has been interpreted as the office lobby, accessible from both William Street and an internal laneway. 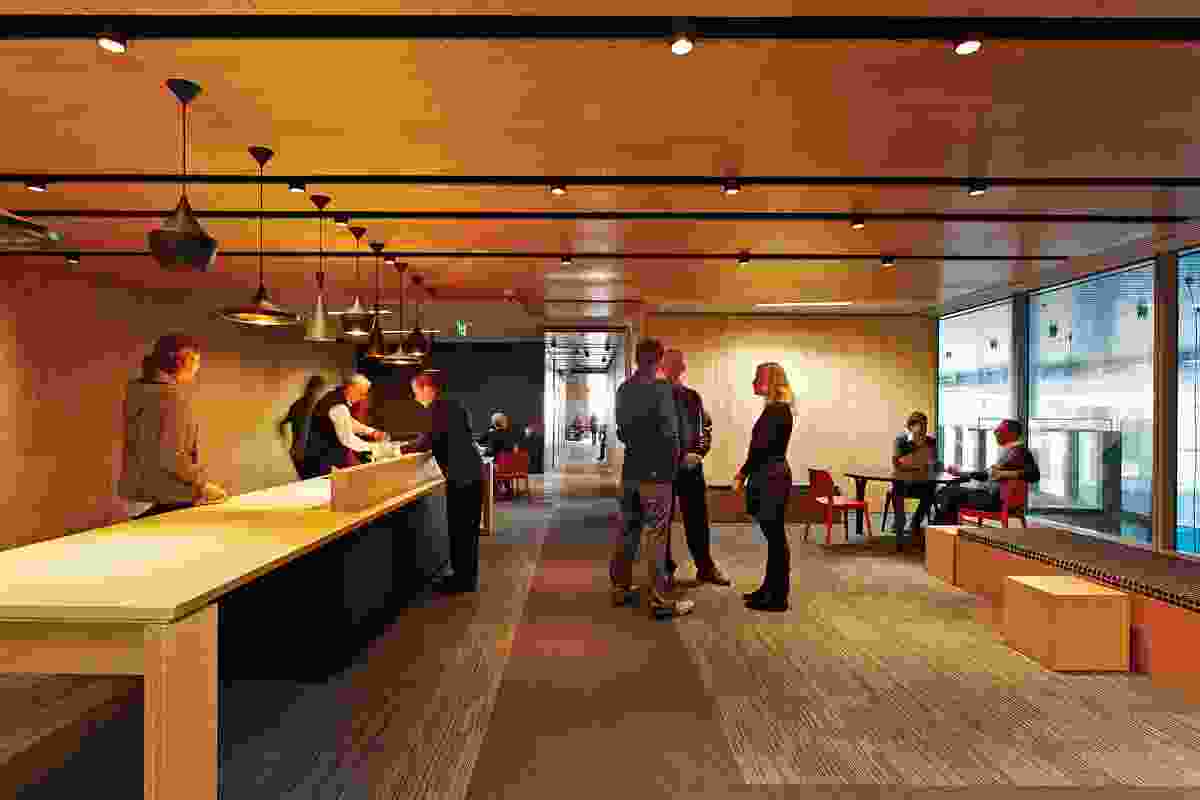 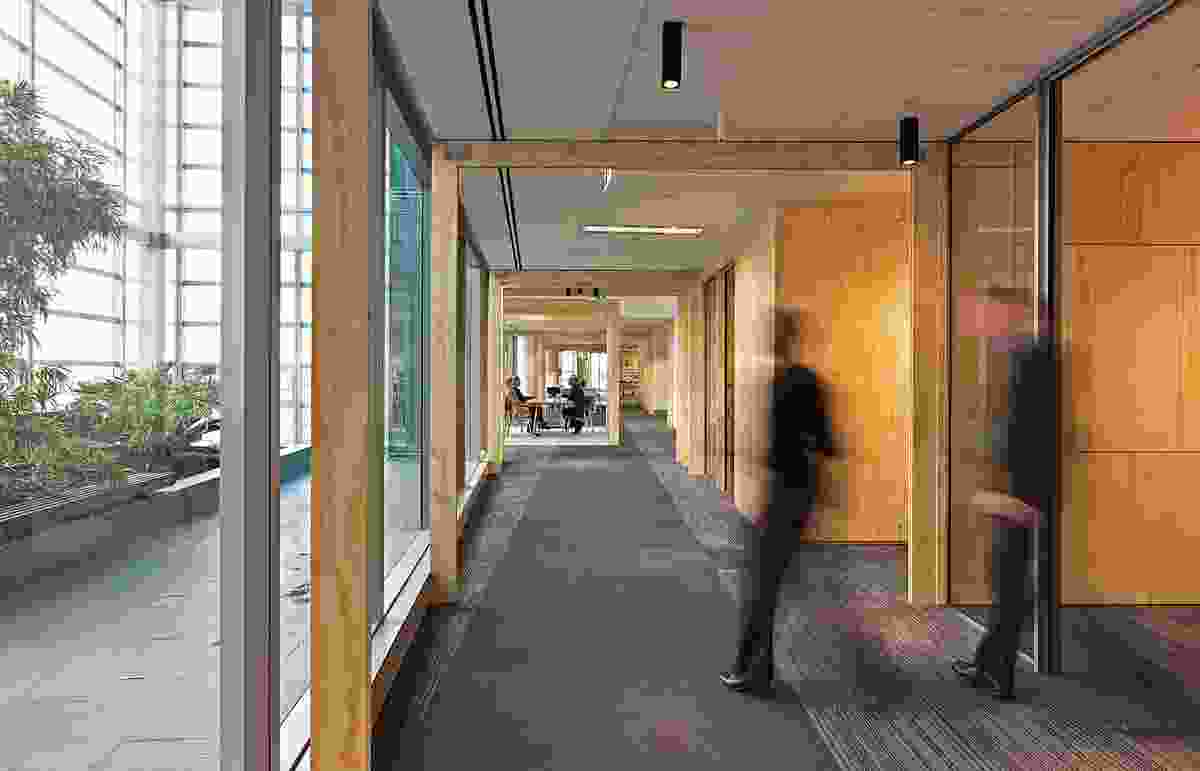 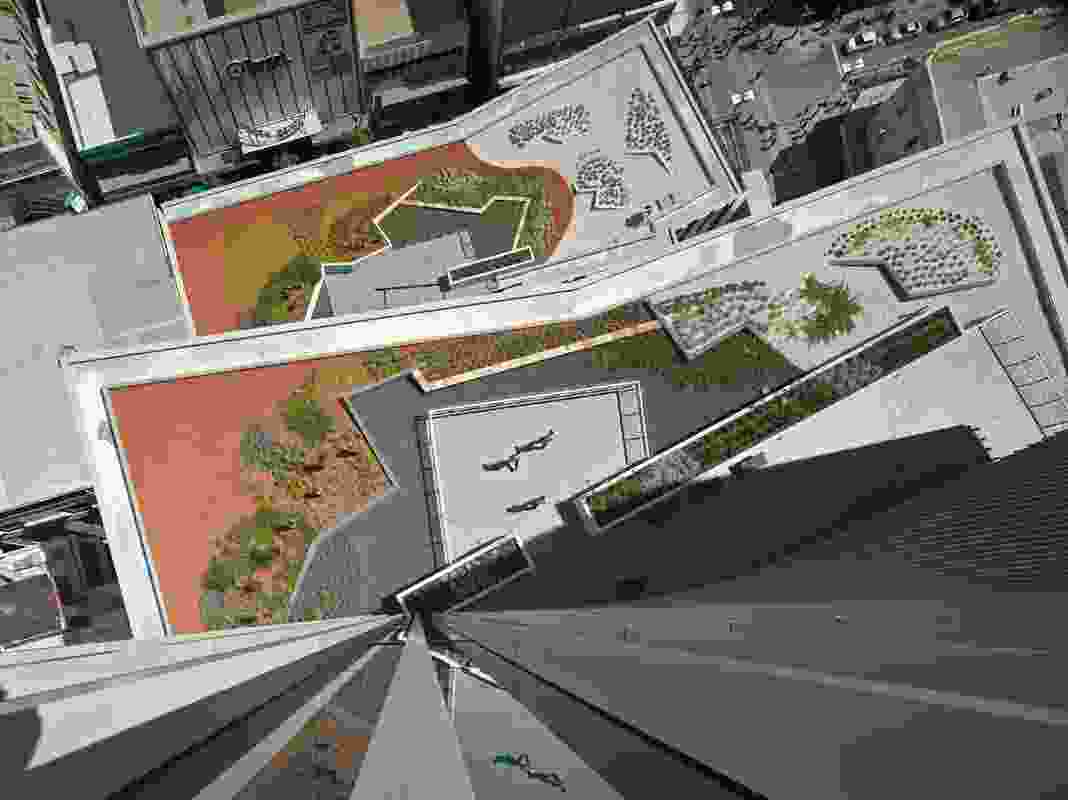 Roof gardens have been created at each step, providing visual outlook and outdoor amenity for the office workers.