Lynda Simmons discusses how the hours spent 'working' and 'caring' are divided and how that might affect architecture practices.

What does ‘care’ have to do with architecture? Quite simply, the unseen care system supports the ability to spend time in the office. Societies operate on a division of labour, with a balance needed between paid “work” and unpaid “care”: the generally invisible work of the domestic realm. The traditional model usually divided this work and care between two parents, with each taking a single role. The last five decades have seen women, the main, unpaid carers, entering the workforce – leaving a huge gap in how societies manage the unpaid care, which is a full-time position.

Much of the unpaid care work has been outsourced and the industry of care is one of the fastest-growing sectors in New Zealand – from retirement homes to cleaners, disability support, day cares and nannies.1 But there is only so much outsourcing of family life that makes sense before the family undoes itself.

Other changes have included the adoption of a four-day week or flexible hours2 – with some caregivers dividing the ‘work’ and ‘care’ evenly, using flexible hours to tag-team the family and professional commitments. These are welcome and significant changes to workplace cultures; however, they are still reliant on effectively compressing the hours of three full-time working weeks into two workers’ lives.

Most architects are aware that the New Zealand student body is now gender-balanced and has been for most of this century.3 This now well-established workforce brings the conversation about Work/Care firmly into the meeting rooms of architectural practices, where management models should be under review to keep up with the contemporary workforce.

The traditional practice model relied on a full-time carer as support person if an architect were to have a family; however, now there is an “absent housewife” and changes in the architectural workplace are urgent. Despite approximately 20 years of a well-established gender-balanced workforce, the profession seems not to have shifted by much in terms of traditional practice structures, processes and habits.

The issue is always that the work of “care” is unseen and under-valued. (Is your commute to and from work a simple, single journey? This probably means you have someone else in your life carrying out the ‘care’ duties. Their commute is likely to have three or more detours.)

One solution for increasing recognition of the value in unpaid care is to have it included in the annual Gross Domestic Product (GDP) calculations and economic modelling. This simple-but-effective accounting addition would include, and therefore value, the work of so many.

New Zealand scholar and ex-politician Marilyn Waring has argued for years for such a redefinition of the GDP: a national income accounting system that adopted the patriarchal values of the post-war era of its establishment.4 Her arguments are based on the awareness that the productivity of a nation (or an architectural office) is intertwined with the unpaid and generally invisible work of supportive care.

There have, in fact, been many attempts to measure it, with results confirming that unpaid care is one of the largest sectors of any nation’s economy. In the UK, it was equivalent to the Retail and Manufacturing sectors and, in Australia, it exceeded the Banking and Financial Services sector.5 More recently, a figure of $205 billion was calculated as the GDP value for unpaid care work in the state of Victoria, Australia,6 and this is additional to the fast-growing paid-care sectors already mentioned.

Such devaluation of care means that males tend to be excluded from this domain, despite strong evidence that they want to participate more in parenting and other care roles. The findings from a recent study showed that 41.5 per cent of males wanted more time available for family-related care; however, accessing flexible time for such reasons is problematic for men.7

The idea here is that, perhaps, if the nation – and indeed the managers of architectural practices – valued the care duties that support a productive and creative discipline, then existing social and cultural barriers could be reduced and more males would have access to flexible hours.8

But, there is a second problem and that is the need for reduced (rather than flexible) hours. With the condensing of three full-time working weeks (when we count the job of care) into the lives of two parents, there is an unsurprising stress on the family. The production of high-quality architecture also suffers when staff members are each juggling one and a half jobs. Gender-blind parental leave is essential, as is access to reduced hours so that both parents can be involved in their work and care duties.

Regardless of gender, part-time work is a career-killer for architects and this, again, is the result of an under-valuing of the contribution made by part-time members of the team. Reduced hours will mean being overlooked for project architect roles and promotion, although I have yet to hear an argument which supports this bias. (Again, it is apparently tied to the myth of ‘dedication’.)

The patriarchal old guard of New Zealand architectural practices would do well to understand the priorities and needs of the members of their current workforce if they are to benefit from their skills. Those practices who continue to refuse reduced-hour contracts should be ashamed of themselves.

This is not an argument about who does the housework. This is a larger, broader issue about how all architectural team members should be supported in their careers. Practice managers should be looking at significant structural changes to their staff management because the invisible care that has propped up practices for so long is no longer there.

This article was original published in Architecture New Zealand. Read the original here.

More about top image: Calvelo’s thesis considers the domestic realm and the workplace, and the ways in which they are being conflated thanks to changing social norms and digital connectivity. Rather than designing altered domestic environments to cater for paid work to be carried out at home, Calvelo’s project affects the public realm with domesticity – literally bringing the unpaid care duties of family life into a workplace.

The project is for a collective architectural practice and proposed headquarters for Architecture+Women. NZ (A+W.NZ), sited on the margins of St Kevins Arcade on Karangahape Road, Auckland. The aim of the project was to create “an inclusive territory that places women and their work visible in a spatial and social context” (Mad Women, page 9).

Calvelo’s research included her creation of the A+W.NZ Timeline, first exhibited at the A+W.NZ Between Silos exhibition in 2013. The Timeline has had four subsequent revisions, updates and installations since then.

Marianne now works at the Melbourne practice Kosloff Architecture. The thesis programme at the University of Auckland School of Architecture and Planning is a full-year design-by-research project. Each student selects their own field of study and sets their own brief.

4 M. Waring, Still Counting: Wellbeing, Women’s Work and Policy-making, Bridget Williams Books, Dec 2018, and M. Waring, If Women Counted: A New Feminist Economics, Harper & Rowe, 1988, republished as Counting For Nothing: What Men Value and What Women are Worth, Heritage, 1999, and more 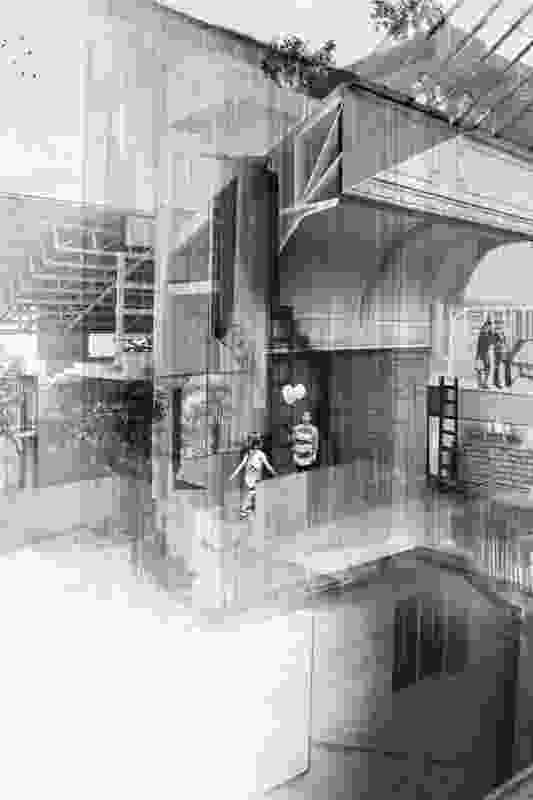